The resiliance and hardcore nature of a BTA

So about 10 days ago I got my first BTA.

I planned to get one later this year and start an anemone tank, but the opportunity came by sooner and I got it on a little bit of an impulse. So I purchased it, got home in the evening and added him into the tank. Watched him a little until it was bedtime and he hadn't moved that much. Only a little so I thought he liked the spot he was in. I was planning to rearrange the rocks and move them away from the power head intakes the next day.

the next morning I wake up and don't see him. Then I see this long thin pink "line" stretching from the top of one of the rocks into the filter. It didn't even look like an anemone (I didn't take a pic sadly). All the tentacles and half the foot had been sucked through the grill and into the power head tube, while a small piece of the other foot was clinging onto the rock. I very quickly removed it from the grill, but I had to get to work and couldn't leave the filter off so I had to hope he would be ok until I got back. He seemed to perk up very quickly and looked totally normal after about 10 min.

Managed to leave work early and got home after about 5 hours, only to find him sucked into the filter yet again. This time it was the whole foot and most of the tentacles (see pic below). I felt I had to cut him out now instead of just gently pulling him out like I did in the morning. It was maybe 5 min after and the bta was totally normal again. All the tentacles out and started moving around the tank again. I immediately rearrange the rock work and cut the powerhead tubes down, putting a soft mesh on the intakes which seems to have worked well.

He spent the next few hours walking and drifting all over the tank, staying in some spots longer than others until that night he found a place he liked on the glass by the rocks, and hasn't moved since. He seems very happy now.

I am amazed he is doing so well. My lighting is only standard freshwater lights that came with the tank (white LEDS) I got last year. All the writing on the lights is in Chinese so I don't really know the wattage but from what I can deduce they look to be 12 watt each. There are two of them so 24 watt in total.
I have some mushrooms corals in the tank too, when I added them months ago they also moved away from this light into a shaded corner. The bta seems to prefer not sitting on the rocks with the most direct light, but a little away from it.

I have 2 clowns, 1 fire fish, 1 cardinal, 1 tailspot blennie, 1 watchman goby, some hermit crabs, 1 peppermint shrimp (and also a crab that I have not yet identified. It has yellow legs which fade into a red/orange colour, purple body with white spots on it and white claws) tank is 170L, 100cm x 45cm.

I am just amazed at how hardcore these bta actually are. I was reading online that some people have kept bta successfully in tanks with nitrates at 80ppm or higher. In all kinds of lighting.

I look forward to getting some proper lighting to bring out the fluoresce in it, and maybe one or two more. And hopefully the clowns start showing more interest in it! 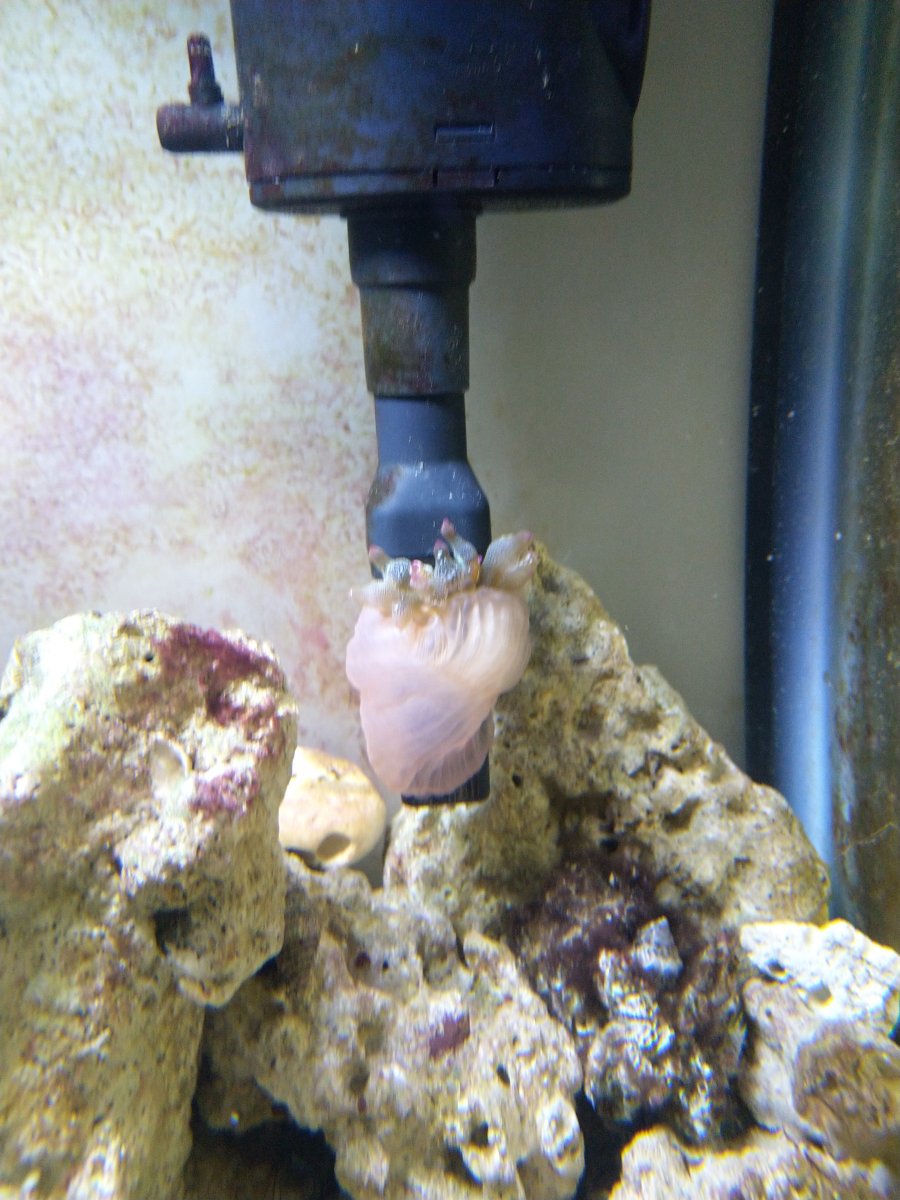 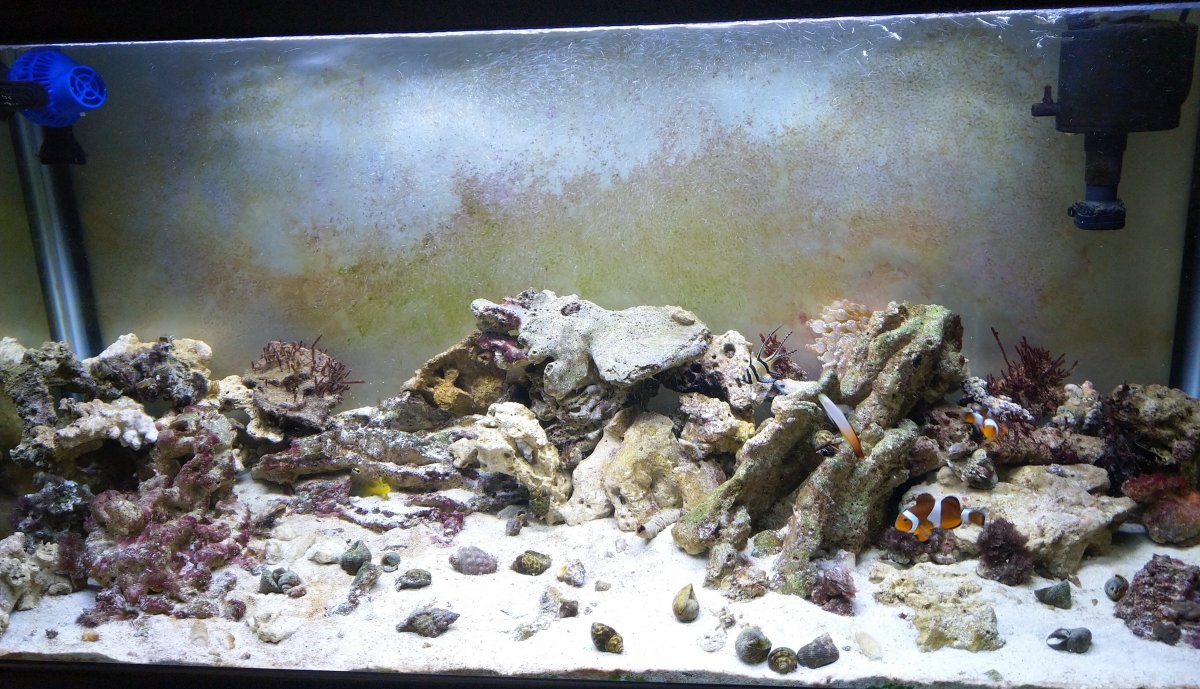 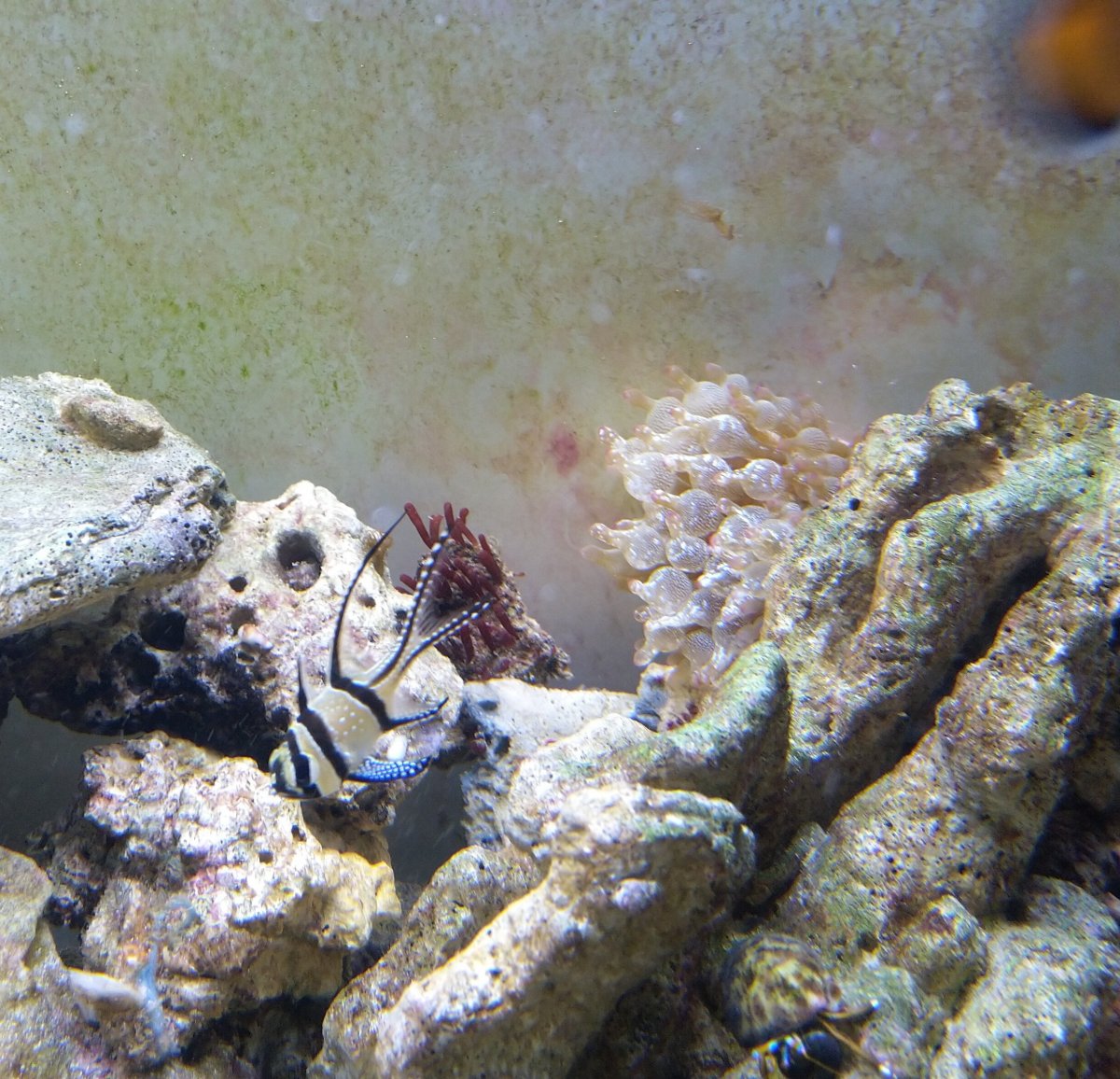 Would look into upgrading lights asap

Your lighting will not keep that anemone long term. They have the same needs as corals and are highly photosynthetic. As said above, a light upgrade is an absolute must if you plan on that anemone surviving more than a month.
OP