Around October of last year I was looking at Paul Brunâ€™s December 2008 tank of the Month from Reefkeeping Magazine. I searched to find some updates and found a thread where Paul was getting some amazing, natural looking growth by randomizing the flow with a Tunze pump attached to a Wavy Sea. I was shocked to see that there was nothing really on the market dedicated to rotating a powerhead. It made perfect sense. A stationary fan in a room compared to an oscillating fan was a night and day difference of how air was circulated around the room. Why not apply this to my Tunze powerheads.

In doing some research and talking to a few people who had some experience with rotating a powerhead, I realized that most people were using a Sea Swirl and mounting the pump to it DIY style. IME, the best part about a Tunze pump is the ability to control the flow. The problem people were having is that the Sea Swirl was made to withstand constant flow and not the jolting on and off of the Tunze pump torquing the axel which the pump is fixed to. Two people I spoke to had the SeaSwirl seize up within a month or two who were using it with a Tunze. My main goal was to build something that could withstand the extreme torquing from the pump kicking on and off, especially when the pump was ran in a pulsing setting to create a wave with my Apex.

A friend of mine was kind enough to help me machine some parts. My plan was to put together two, one for each of my Tunzes in my display. I just put one together to see if this would even work. It was added to my tank Dec 31, 2011. By the beginning of March, I quickly realized that this was a game changer in my tank and I believe that this single unit accounted for a drastic increase in the growth and health of my corals in such a short time period. I've never had growth like this occur in my system no matter how perfect my parameters were. There was quite a difference in growth compared to the side where the rotator was running and the side where the Tunze was stationary. I added the second rotator about a month ago and have seen similar increases in growth as the other side of my tank has the rotator.

Here are some observations:

In addition to rotating my pump I also incorporated into the unit adjustable speed, easy connect, minimum power consumption, maximum torque, adjustable height, and a clean connection to the Tunze clamp mount.

I will try to get some detailed shots but here are a few to get things started.


Excuse the excess amount of algae. Time for a cleaning. 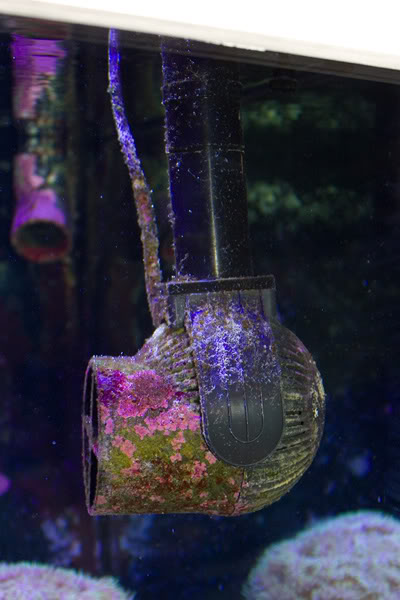 Here is a shot of the box itself. Ignore the acrylic spacer under the box. I have very thin bracing (Oceanic Tech Series tank). 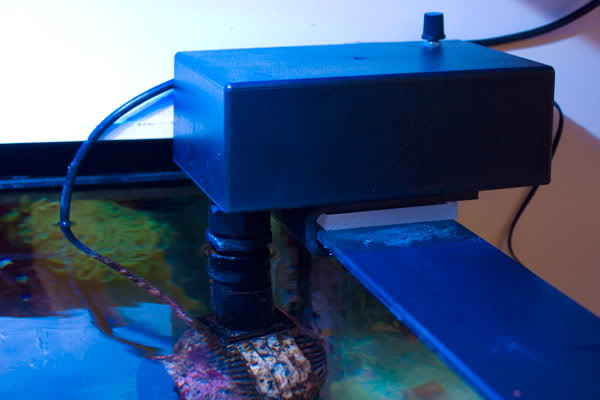 Great write up, very detailed. Now, what's IN THE BOX?

That's what I want to see too. This looks awesome! I don't use powerheads, but it is surely a good design.

When are you going to start selling them? hehe

They were pricey though, $200+ if I recall correctly
OP

Basically just a motor, gears, speed controller, axel, and bearing. I had a mini hamster wheel but he kept getting tired.


cdness said:
That's what I want to see too. This looks awesome! I don't use powerheads, but it is surely a good design.
Click to expand...


Thatgrimguy said:
When are you going to start selling them? hehe
Click to expand...

These are much to time consuming to mass produce. Trust me. My wife would kill me!!!


spscrazy said:
this is a great idea it has almost been a dream of mine to find something that would rotate powerheads in my tank I can't afford seaswirls or the mp40 etc so if you decide to make some to sell & they don't cost a ton I would be interested
Click to expand...

They were pricey though, $200+ if I recall correctly
Click to expand...

Yeah I saw these earlier this year but figured SeaSwirl might be running into similar issues I ran into with the power of the pump pushing back. I'm surprised they are still not out. It would have saved me a lot of time but at that cost I'd still have tried to make my own.
D

Very nice how about a video. I've seen his tank in person and it was already great before this.

dedubya said:
Very nice how about a video. I've seen his tank in person and it was already great before this.
Click to expand...

I'll try to get one together in the next few days.
D

Just curious do you think the moisture, and salt will have any ill effects on this over time to seize it up? You got my brain spinning now on how to make 1 viable for an mp 40 without damaging the dry side.
OP

dedubya said:
Just curious do you think the moisture, and salt will have any ill effects on this over time to seize it up? You got my brain spinning now on how to make 1 viable for an mp 40 without damaging the dry side.
Click to expand...

No worries on moisture damage. It is sealed and the motor won't seize up.

Sorry, been tied up for the past week.

I will get some photos of the inside and a short video posted in the next few days.
B

Nice work. I made a similar one about 10 years ago. Yours looks a lot nicer than mine. I got tired of my wife asking when I was going to put the living room fan back together. Well done.
OP

Here is a quick video of one full rotation. I stirred up some detritus so we could see the water movement.

That rotates faster than I thought it would. What RPM motor is running the internals?
I recently got a sea swirl and the differnce in the coral from the randow flow is pretty remarkable. I do like the tunze rotator idea better though. I hate the look of the plumbing running to the big sea swirl.
OP

I'm using a 5 rpm motor with a PWM speed control. What you see in the video is full speed but I can turn it down to any speed. I can even reduce it to as low as 1 rotation per day!

I promise I'll get some internal photos this weekend.

Yeah i would really love to know how you made this. I would love to use one on my new build. Anxiously awaiting the details...

hollback said:
I'm using a 5 rpm motor with a PWM speed control. What you see in the video is full speed but I can turn it down to any speed. I can even reduce it to as low as 1 rotation per day!

I promise I'll get some internal photos this weekend.
Click to expand...

That's awesome you can control the rotation speed. Definitely looking forward to seeing more info on this build.
OP

Here is the inside of the rotator. Basically a motor, axel, swing bar, bearing, gearing and the speed control. 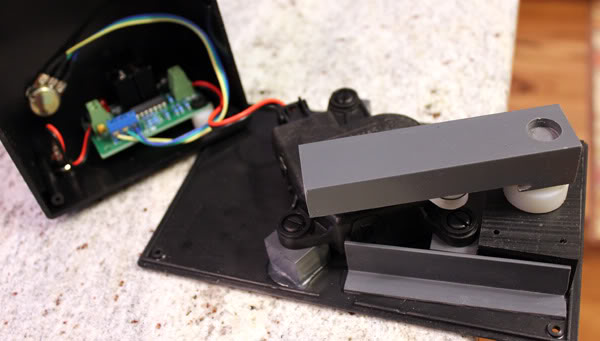