I have a tendency to name certain projects (computers, telescopes, etc). Kedge Keep is an underwater zone area in the game EverQuest (MMO launched in 1999, the only online game I've spent much time on). Have named several fish through the years after NPC's from that game, and probably will do the same with some of the inhabitants of this tank.

It has been almost 7 years since my last build, and this is my first reef tank. There are many pieces of equipment and conditions I've not worked with before. I wanted to take more pictures of components arriving and the mini-projects leading up to and after putting the tank together. Ended up trying to get as much done as I could on my days off work and realized I have now done much of it without documenting the steps.

Will upload more photos as able. Need to check the wife's phone to see if she has any of the build process. The only photos I have so far are those included here, almost all taken the day the tank was filled and right before I turned the light off to start cycling.

Photo caption: Was slightly cloudy from fill, cleared up very quick though. All of the little bubbles were gone within a day. 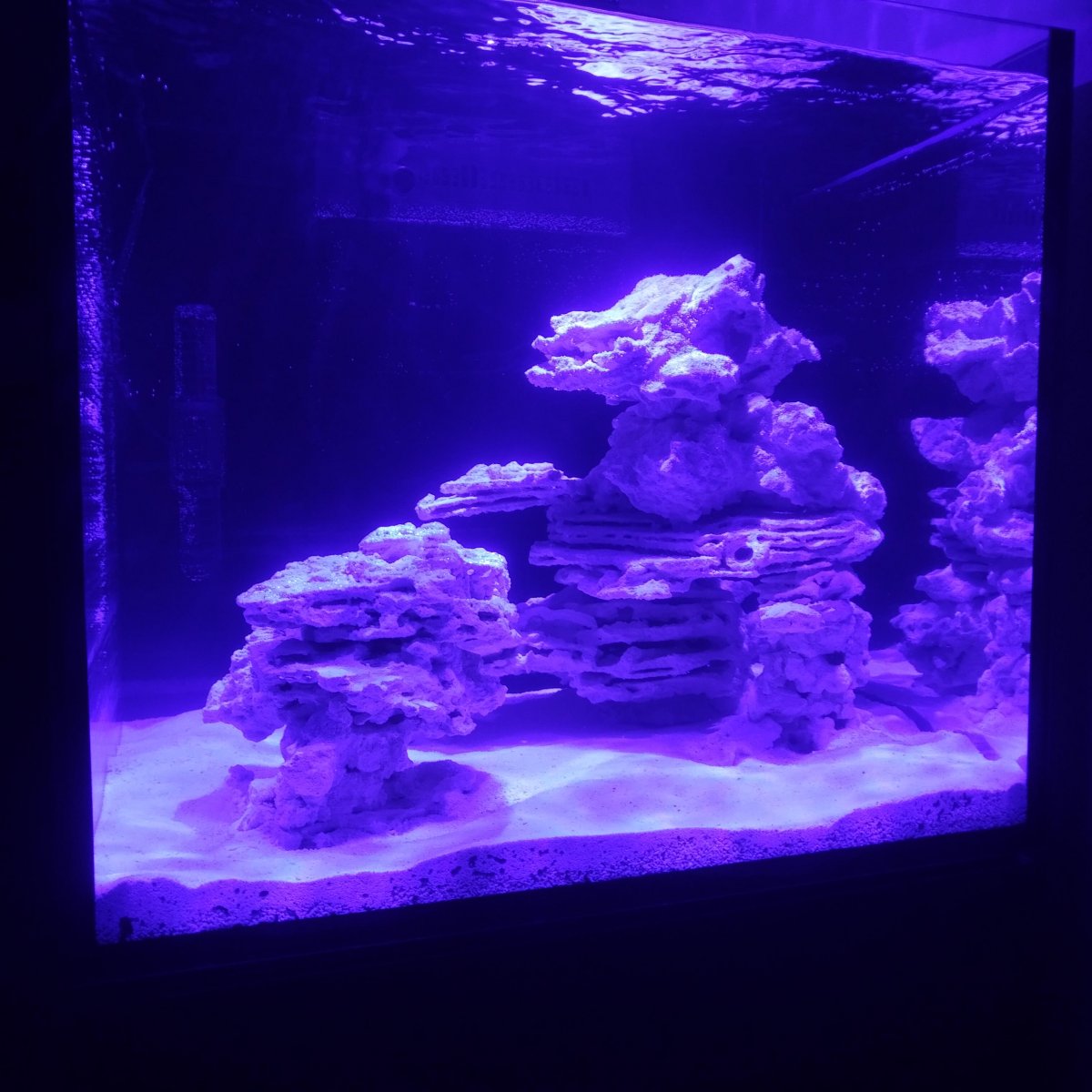 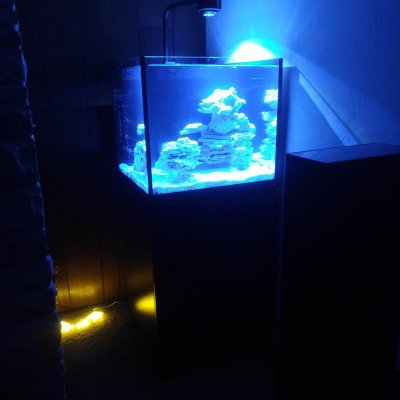 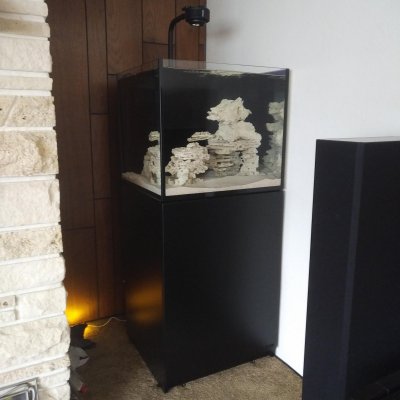 Photo caption: Blurry, I have an old phone and an unsteady hand. 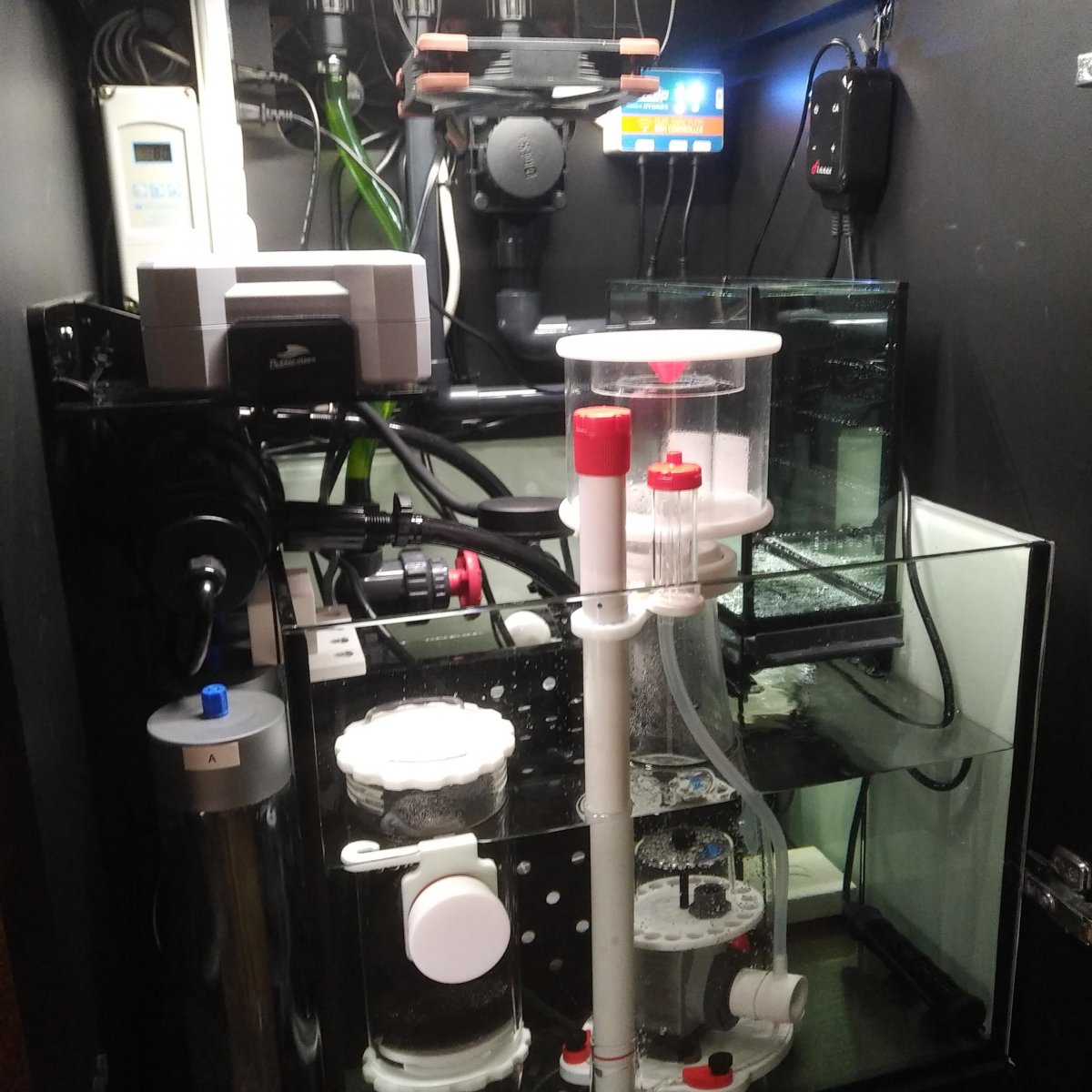 Photo caption: Hopefully I can find a picture showing a better angle of the back, it's really more organized than it looks from above. That said, I could definitely have put more thought towards cable management. Bundled some things together I maybe should not have. Went over or through cables that might give me troubles. Used lots of 3M double sided tape and command strips. Zip ties for extra cord wherever I could (with and without adhesive anchors). Some things will be hard to clean or swap. 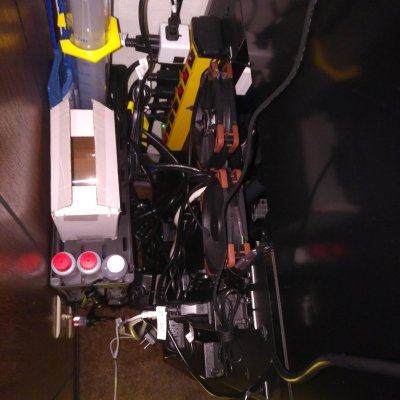 Photo caption: Working on the aquascape on the deck. Strait of Juan de Fuca is fogged over in the background, otherwise you would be able to see Vancouver Island (CA), the San Juan Islands (WA), and Mount Baker. 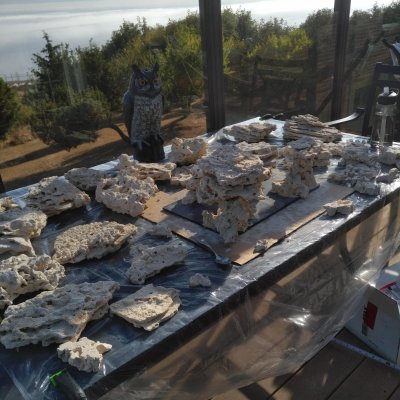 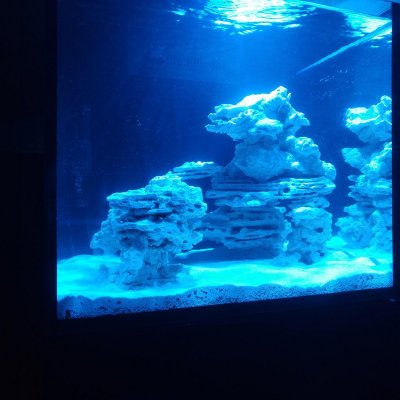 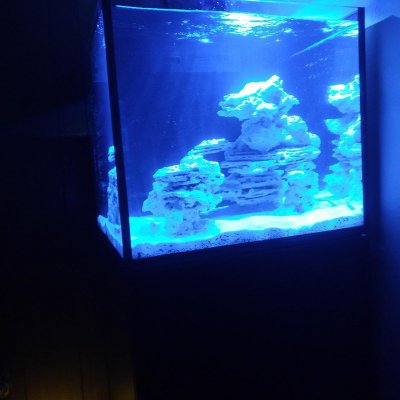 Tank: Red Sea Reefer 200XL (Black)
Notes: Simple modification done to hang door for right-swing opening. Due to the corner the tank is in, access would have been severely limited using the factory left-swing arrangement. It seemed like the Red Sea logo badge would have been especially difficult or damaging to remove, so I just covered it with a thin piece of silicone sheet material, looks fine to me without the logo. Added a dark blue vinyl background to right side of DT, to avoid seeing the white wall it is up against through the glass when viewing from the left side. Added white contact paper to back and right sides of sump. Coated hinges and other exposed metals with Vaseline.

Cover: Clearview Classic version w/ black mesh (ordered Aug 24th, so I probably have quite a wait before I get it)

Wavemaker: IceCap Gyre 2K w/ WiFi controller [added IceCap mesh intake covers, like these so far, we'll see how they hold up. Tried a thick 3D printed version, but it restricted flow way too much and made the pump incredibly loud]

Reactors: AquaMaxx FR-M Internal Media Reactor with Sicce Pump [have 2 of these, but took one out to make room for the fuge mod]

Refugium Mod to sump:
DIY divider, black acrylic piece drilled to allow flow [48 holes @ 3/8", more holes in bottom half than top, to hopefully force more water through the Chaeto]
Chaeto basket: DIY with egg crate, 4"x9" (roughly 2" tall) [used black acrylic rectangles to affix top to bottom and kept the long sides open that fit snugly up against two dividing sections. Due to the limited space, didn't want to give up more lighted surface area or Chaeto holding volume.]
Grow light: ReefBreeders Pico LED Light - Full Spectrum Refugium (8W) [w/ timer] (planning on a ~16hr lighting schedule, with the off period being in the evening, to enjoy tank without light creeping from cabinet)
Pod Hotel: DIY corrugated sign material (3"x5" footprint, 1.75" tall), glued it to a small piece of STAX rock so it stays on the bottom

Dosing Pump: Bubble Magus BM-T11 Dosing Package
Notes: Will probably be a while before I'm using this, but wanted to install it early and be ready. The mounting platform it came with is nice, but sticks out a bit far because of the center support brace, especially on the limited space in the 200XL.
- 3x 800ML Voss bottle DIY dosing containers [package came with 1.5L SeaSide Aquatics containers, but they wouldn't fit next to the sump due to my moving the door hinges]
- IceCap magnetic dosing tube holder [package came with the SeaSide Aquatics tube holder, but caused fit issues on the sump rim where the UV sterilizer sits]
Dosing Compounds: Tropic Marin ABC Part Balling Set

UV Sterilizer: CoraLife Turbo Twist 6X UV Sterilizer (18W)
Notes: Got a good deal on it, then read the reviews about the rusting issues of the reflective liner and potential voltage leaks. Coated the whole inside with clear PlastiDip, especially thick near the light housing hoping to insulate possible voltage leaks. Hope it gets the job done without overly detrimental effects. I'll go with an AquaUV if/when it fails.
Sterilizer Pump: SICCE Syncra Silent 1.5 [added inline ball valve for easy flow rate adjustment]

Dry live rock: Used 42LB combination in display (RO/DI rinsed all)
- MarcoRock Premium Shelf Rock (60LB)
- Two Little Fishies STAX (40LB)
- CaribSea South Seas Base Rock (10LB) [ended up not using any of this in DT, except a couple pounds I crushed into powder for aquascaping with insta-cure glue, did used some in the small QT though]
Aquascape Notes: Not completely pleased with the result, but I can live with it. Bought too much rock hoping to get pieces I would like, and then had trouble on such a small tank putting them together in a way that allowed the negative space and open sand base I was going for.

Salinity meter: Tropic Marin Hydrometer w/ Graduated Cylinder [and a BRS Refractometer that I bought a decade ago for the brackish tanks I had while living in China]


Filter Socks:
- Red Sea 225 micron Mesh Sock (x7) [will use these most of the time]
- Red Sea 225 micron Felt Sock (x3) + 100 micron Felt Sock (x3) [probably won't use these often, if at all, possibly for occasional polishing]
- Red Sea Filter Cup [don't want to create perpetual plastic waste though, so will give the socks a chance first before buying any Poly-Fill or filter pads to use with this]

Filter Media:
Surface area material: Maxspect Nano-Tech Bio-Block x 2 [1 in overflow chamber under ATO, other inside fuge chamber]
- Purigen
- Chemi-Pure Elite
- ecoBAK BioPellets
- Brightwell Phosphat-R
Notes: I realize that I won't want to run all of these at once, with the other methods of filtration present (socks, skimmer, fuge, etc). May just let a fractional dose of the Bio-Pellets and Phosphat-R tumble in the reactor to help as a buffer in case the Chaeto can't keep up. The Purigen and Chemi-Pure were originally bought with the idea of putting bags in the filter sock, but I may scrap that altogether. At least I have them on hand to toss in if fuge has troubles or if I want to change media in the reactor.

Bioculture Additives: Dr. Tim's One and Only + FritzZyme Turbo Start 900 / Dr. Tim's Ammonia Chloride dosing
Cycling notes: I know one product would probably have been enough, but wanted extra diversity and figured the bacteria would compete with each other and colonize as able. Also have some Brightwell MicroBacter7 that I haven't added yet, maybe later after some fish are in the tank.


Quarantine Tanks (x2):
- Lifegard Aquatics Nano Tank w/ built-in filter (2.7 Gal)
- ReefBreeders Pico LED - Saltwater
Notes: I realize this is too small for all but very small fish to QT. Plan to keep mostly smaller species anyways, and figure this will do the trick for some of those and emergency evacuations (plenty of 5 gallon buckets and plastic bins on hand too). Plan to also buy from QT'd sources whenever able.


Cleaning Tools: Flipper Float (standard) and JBJ Aquascraper 4-in-1 (for sand raking and scrubbing the surfaces that the Flipper can't get to)


Livestock Ideas:
Fish:
Chromis x 3-5 (blue/green)
Goby x 1 (sleeper blue dot, gold head, or ?)
Clownfish x 2 (many coloration choices here that I like the look of, but will be looking for Ocellaris with smaller adult sizes)
Filefish (maybe) (1 or 2?) (radial, tassle, or ?)
Mandarin (maybe) (green, blue, or spotted?)

Notes: I've always been a sucker for unique species that aren't the traditional fish shape, the filefish comes the closest to that in this stocklist. I had "FW Moray" eels in my old brackish tanks that did well, but my wife would kill me if I got an eel (even I had nightmares about them sometimes), plus the tank is small for most SW species I like. Have had puffers (Brackish and SW), they are adorable, but same thing on species size limitations. Had multiple fish-only predator tanks, which limit tankmates drastically. This is my graduation into a hopefully calmer, more peaceful reef tank (though of course I know it will not be completely without some minor predation, as nature relies upon).

Would absolutely love to stock a couple seahorses, but aside from the extra special husbandry they require, would need to do a lot more research on what other fish and coral I could keep with them. Maybe someday...

Inverts:
Micro Brittle Stars (hoping they can be a big part of my CUC, as my wife wants me to do everything I can to keep any worms out of the tank)
Purple short spine pincushion urchin (if I can find one)
Porcelain crab (maybe)

Corals: (TBD) Note: I still have a lot of research to do here, and it sounds like I should wait until the tank is a bit more mature, so that will give me some time.
Soft: some are beautiful, but do worry about keeping their growth in check (does anyone see some platform type areas in my aquascape that might work well?)
LPS: ?
SPS: I know I'll want at least a birdsnest eventually, and so many beautiful acro to choose from.


Photo caption: View from the left side of tank 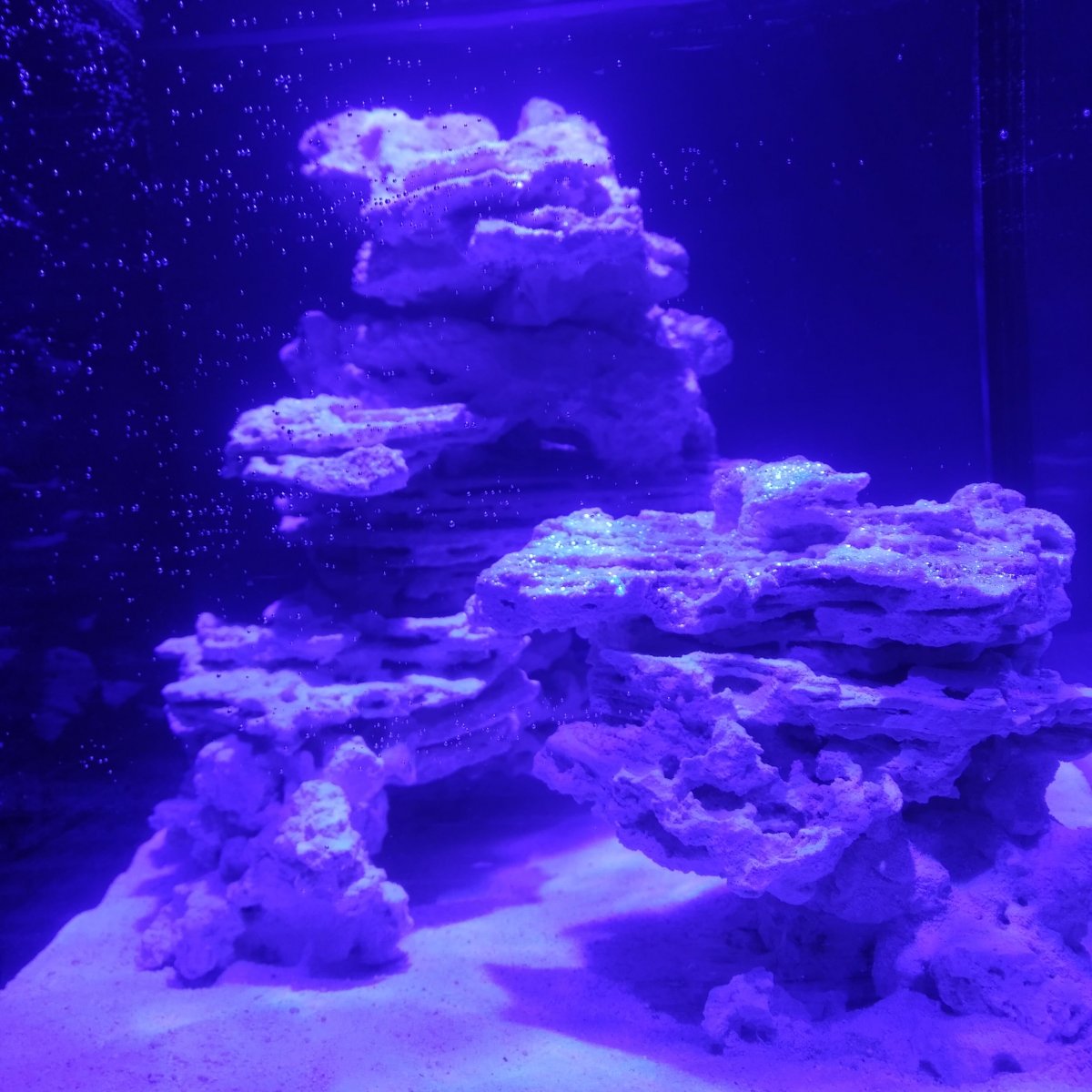 That's all for now, will update and add more photos as things progress. Thanks for looking.

Status:
31-Aug-2021 The tank has been up and running now for a few weeks and nitrogen cycle seems to be nearly finished. Next weekend I will probably do a big water change and turn the light on. First fish a week or two after that maybe.

Looking good! What fish are you planning to add first?
OP

SaltyT said:
Looking good! What fish are you planning to add first?
Click to expand...

Most likely a bonded clownfish pair. Had planned to not even stock clownfish on this build, but the many positives outweigh my passive desire to take a path less traveled.

Maybe goby (single or bonded pair) next after the clowns. Then a set of chromis, chalk bass, or some other small schooling fish.

After those are all successful for a while and the tank is maturing, will get into corals and consider options for possibly adding another fish or two.

Who can resist a pair of clowns?? They look like happy puppies when they swim Looking forward to watching your tank’s progression.