lbacha said:
I wouldn’t worry about the Cal unless you are seeing precipitate. It doesn’t have a negative effect like high alk does.
Click to expand...

Good point, but if I trying to balance levels around the 8dkh reference range I might as well drop it a bit, but no rush or hurry you're right.

hart24601 said:
Ok, so I tried to take a few close up pics with my point and shoot camera, not iphone. Let's see how they came out. 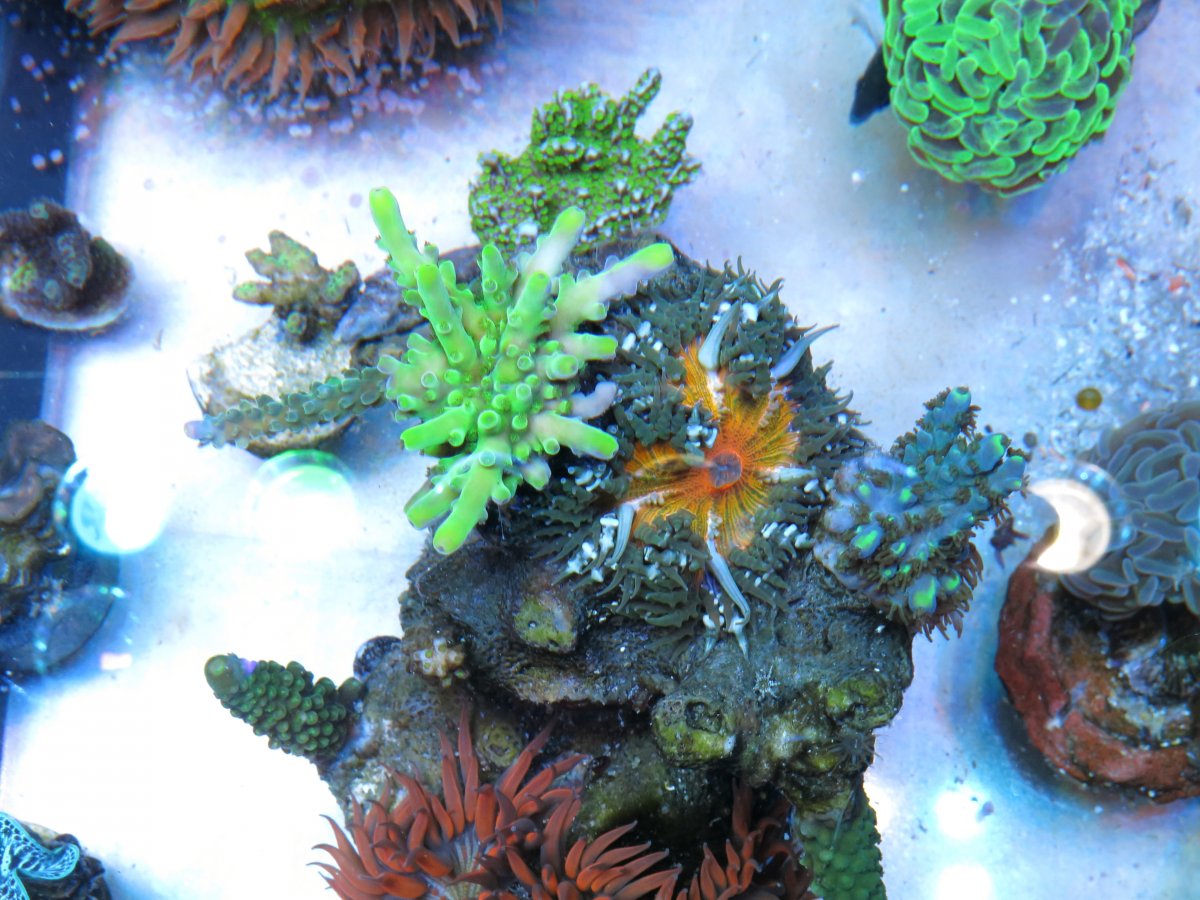 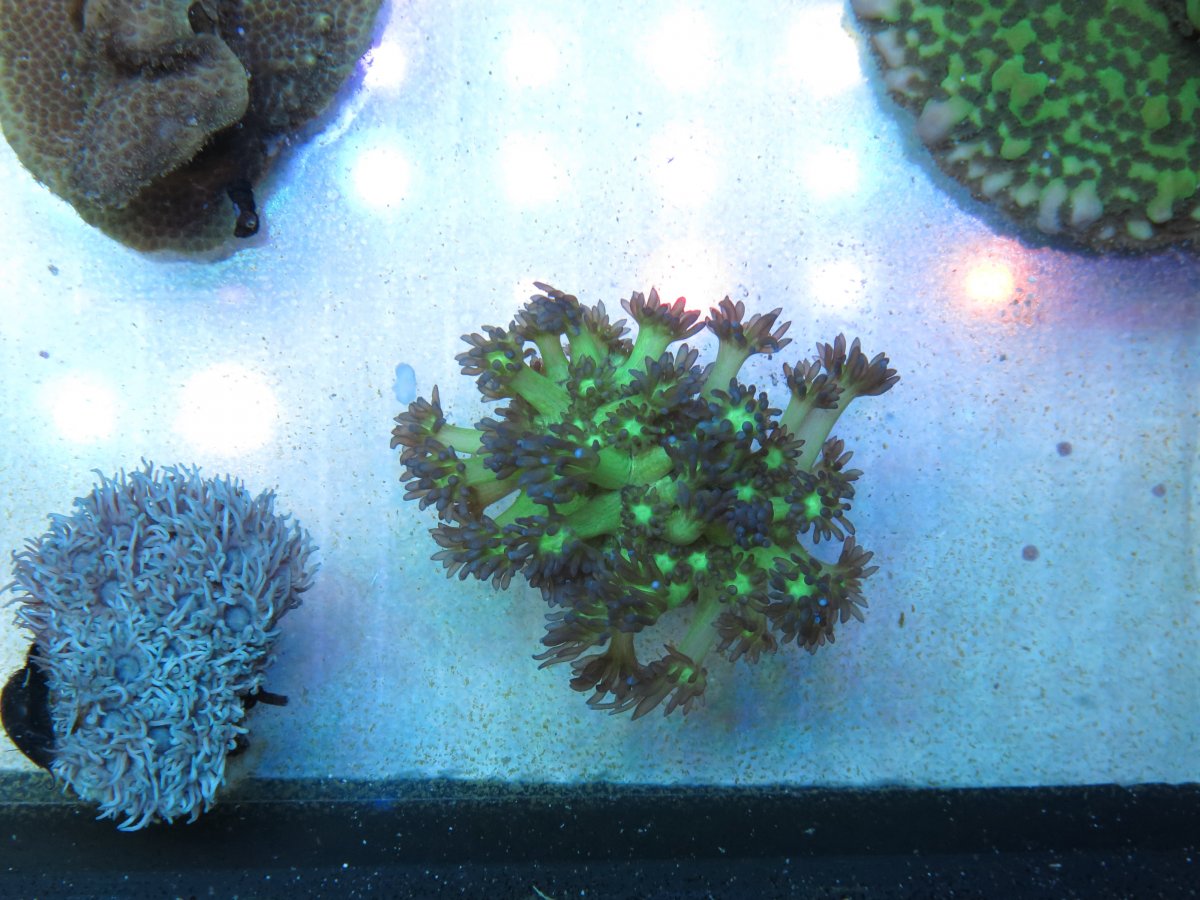 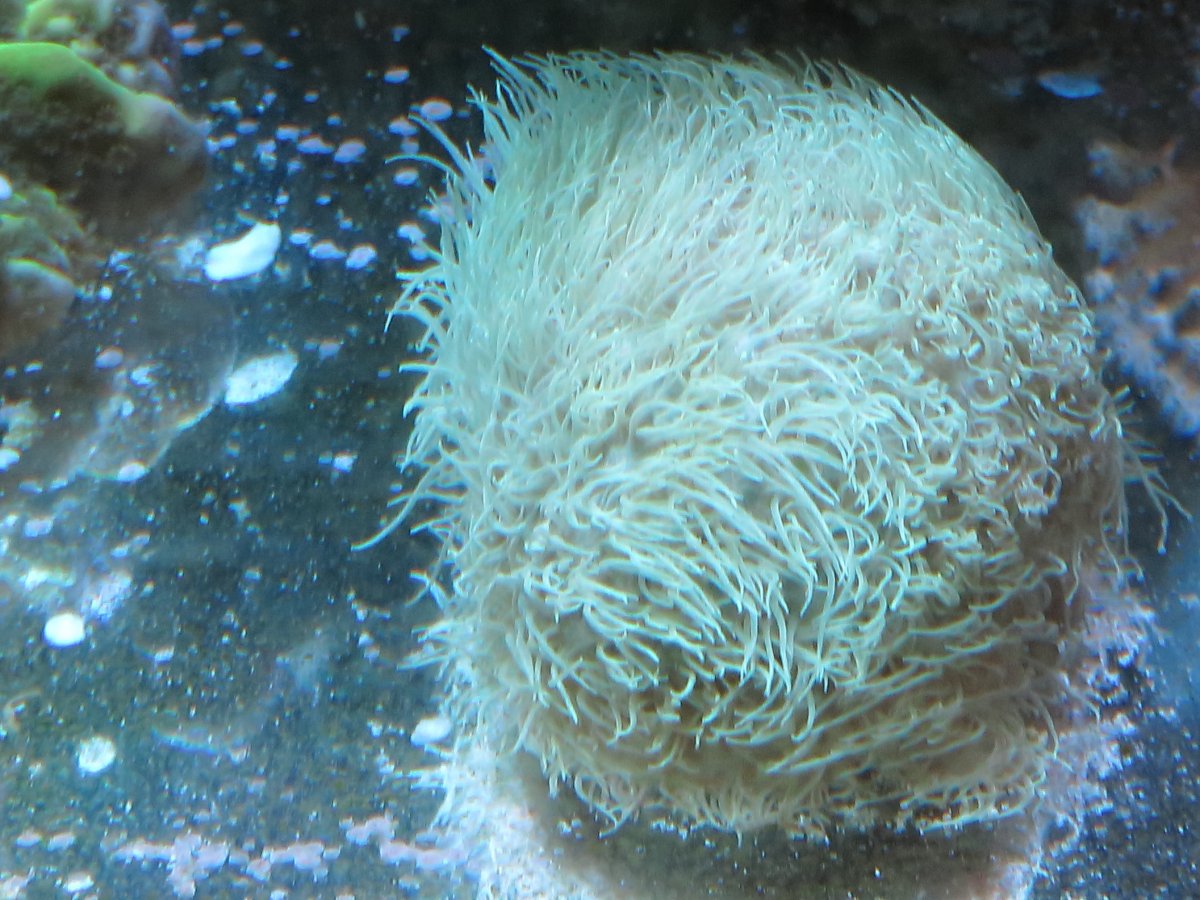 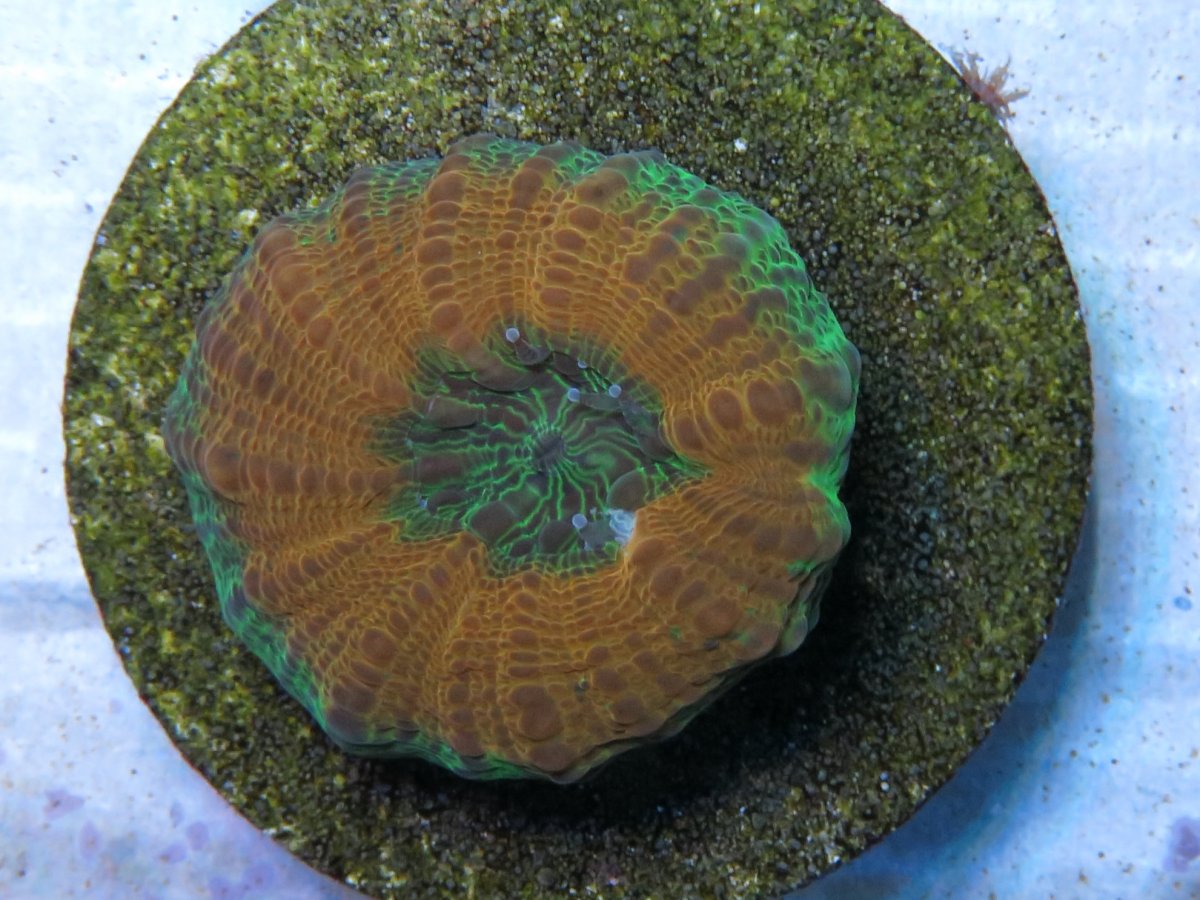 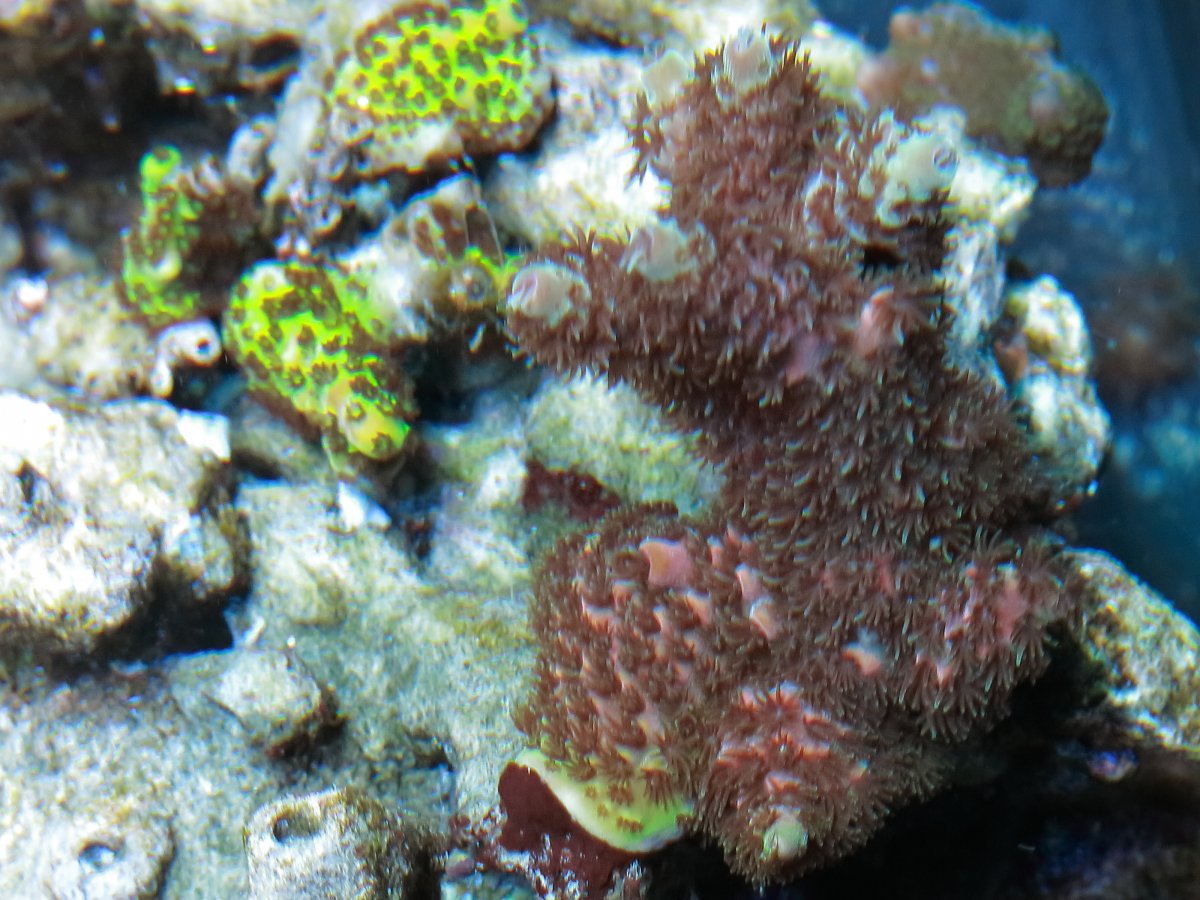 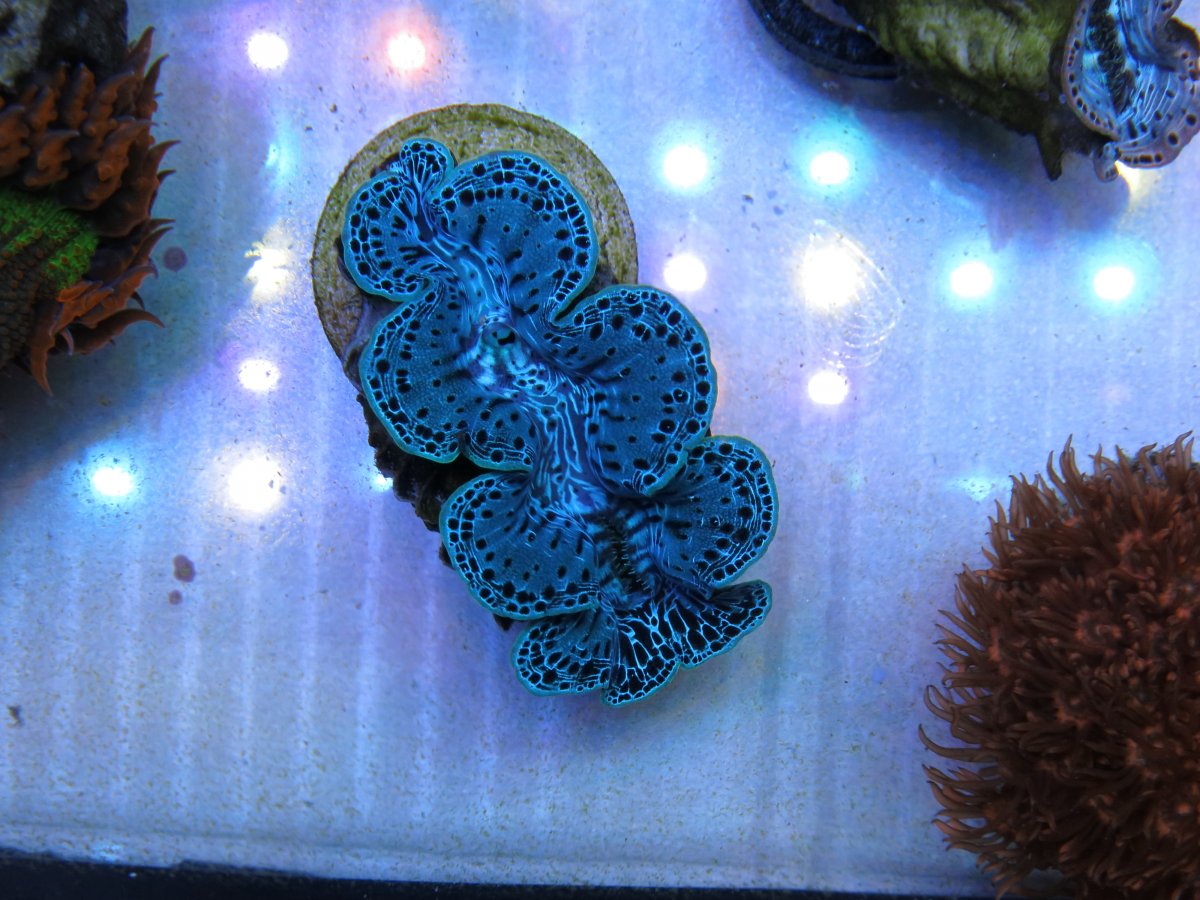 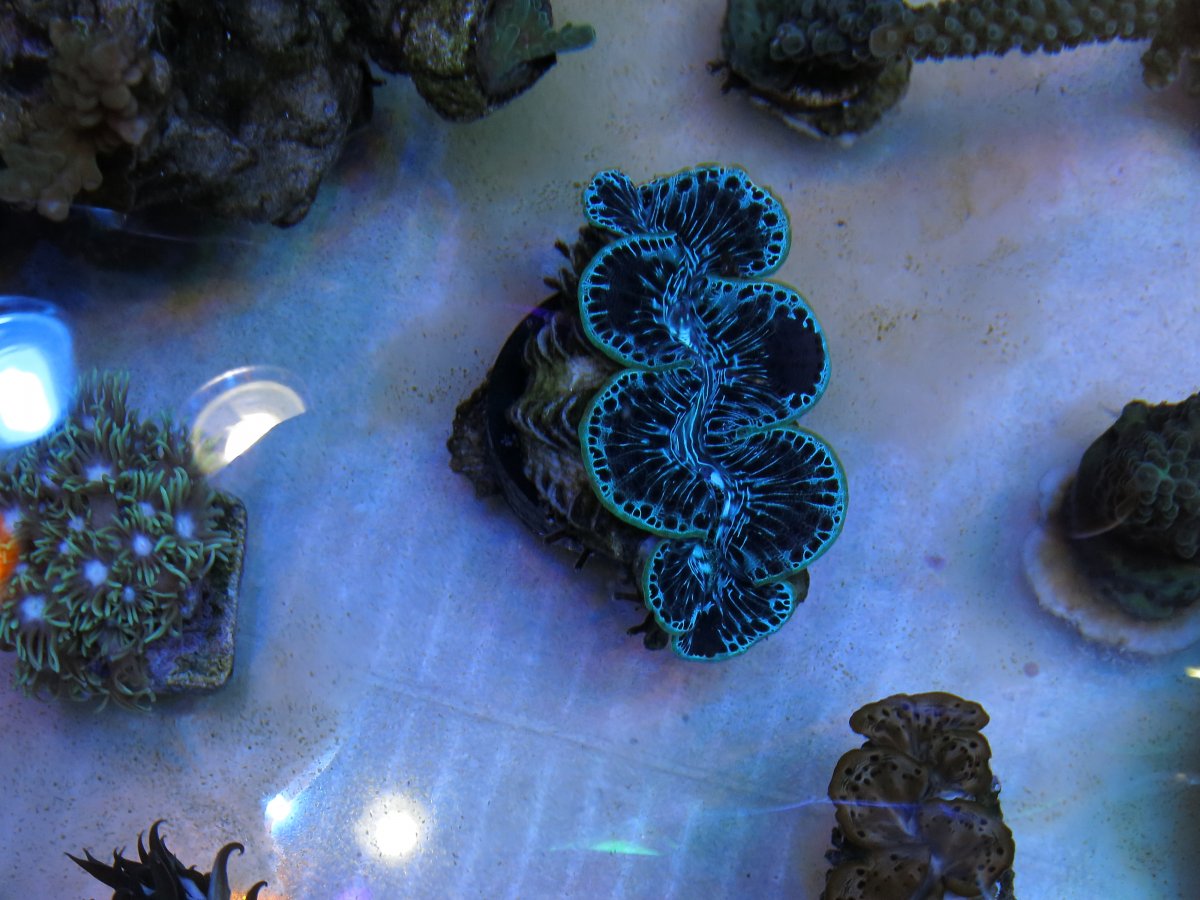 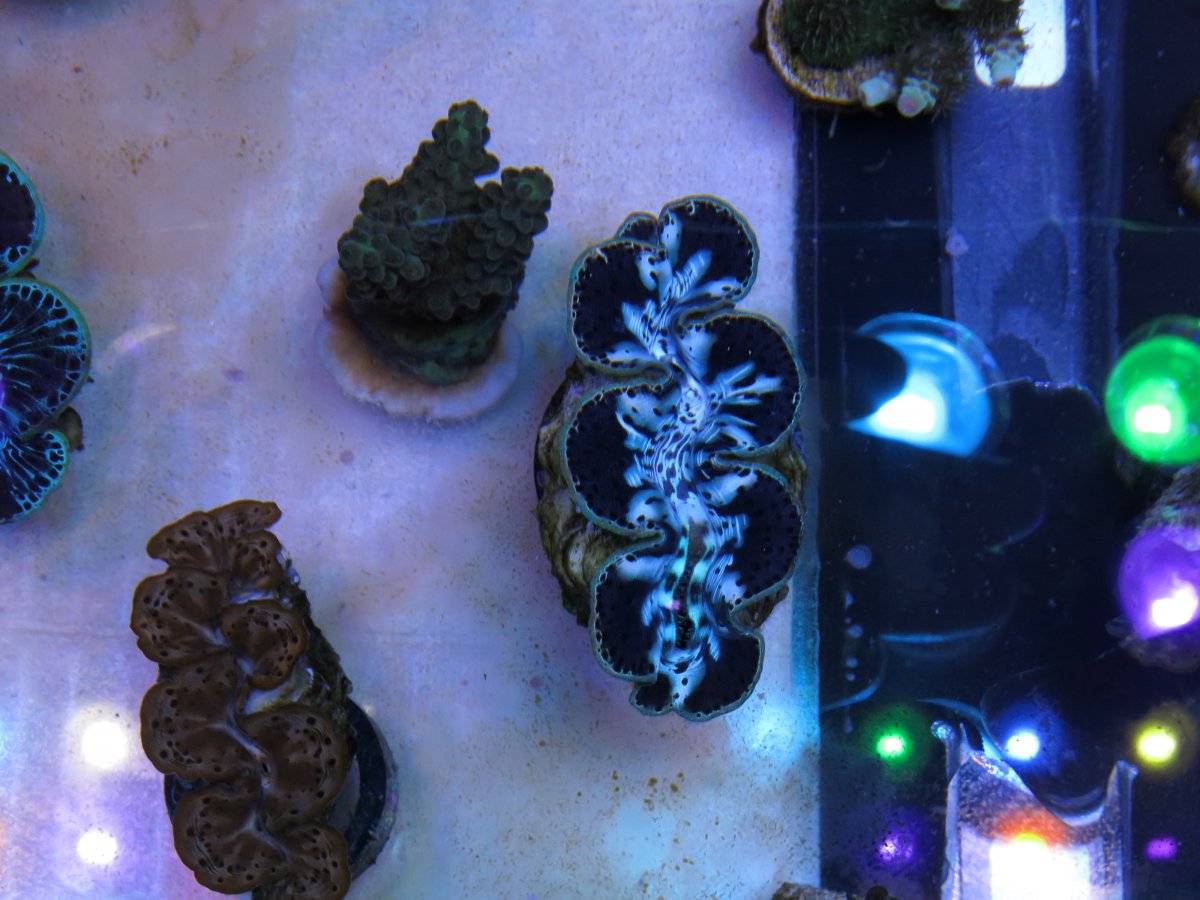 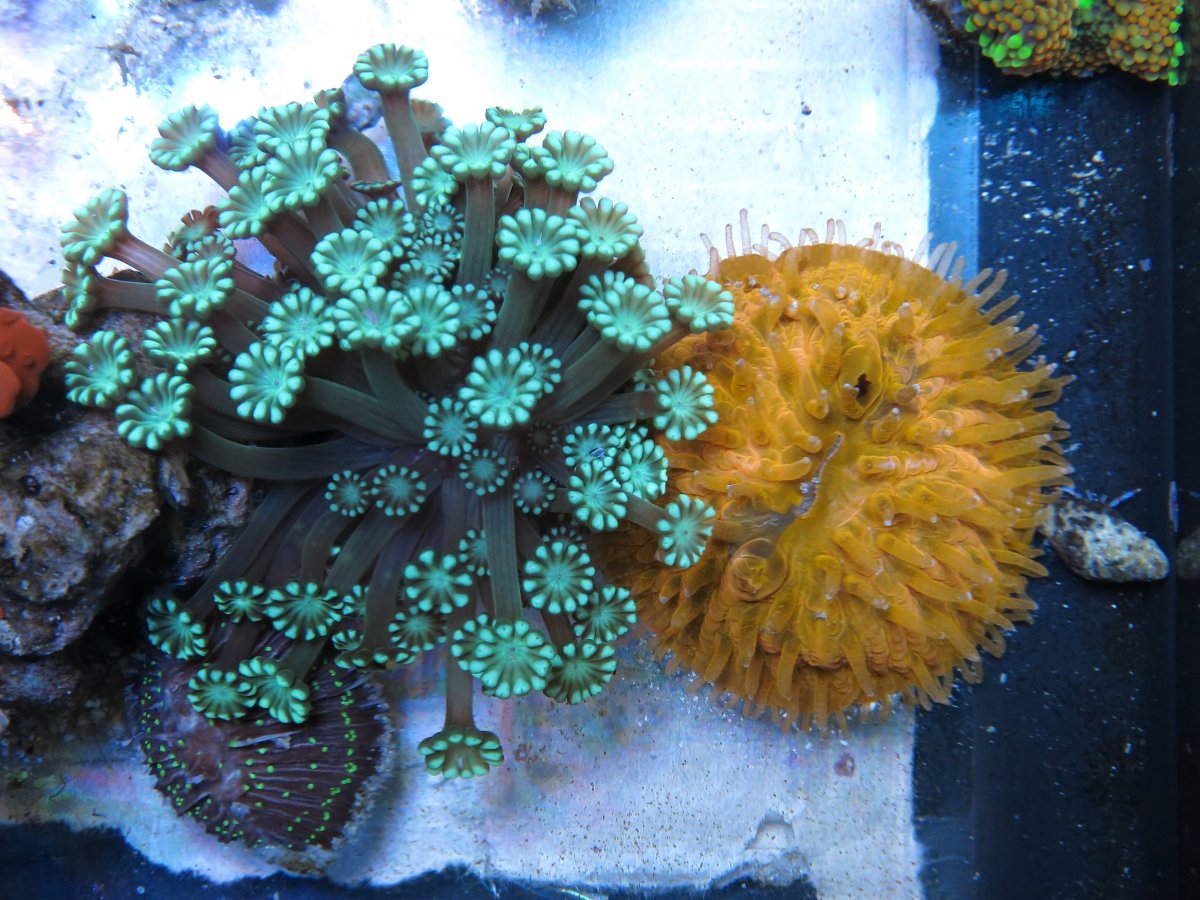 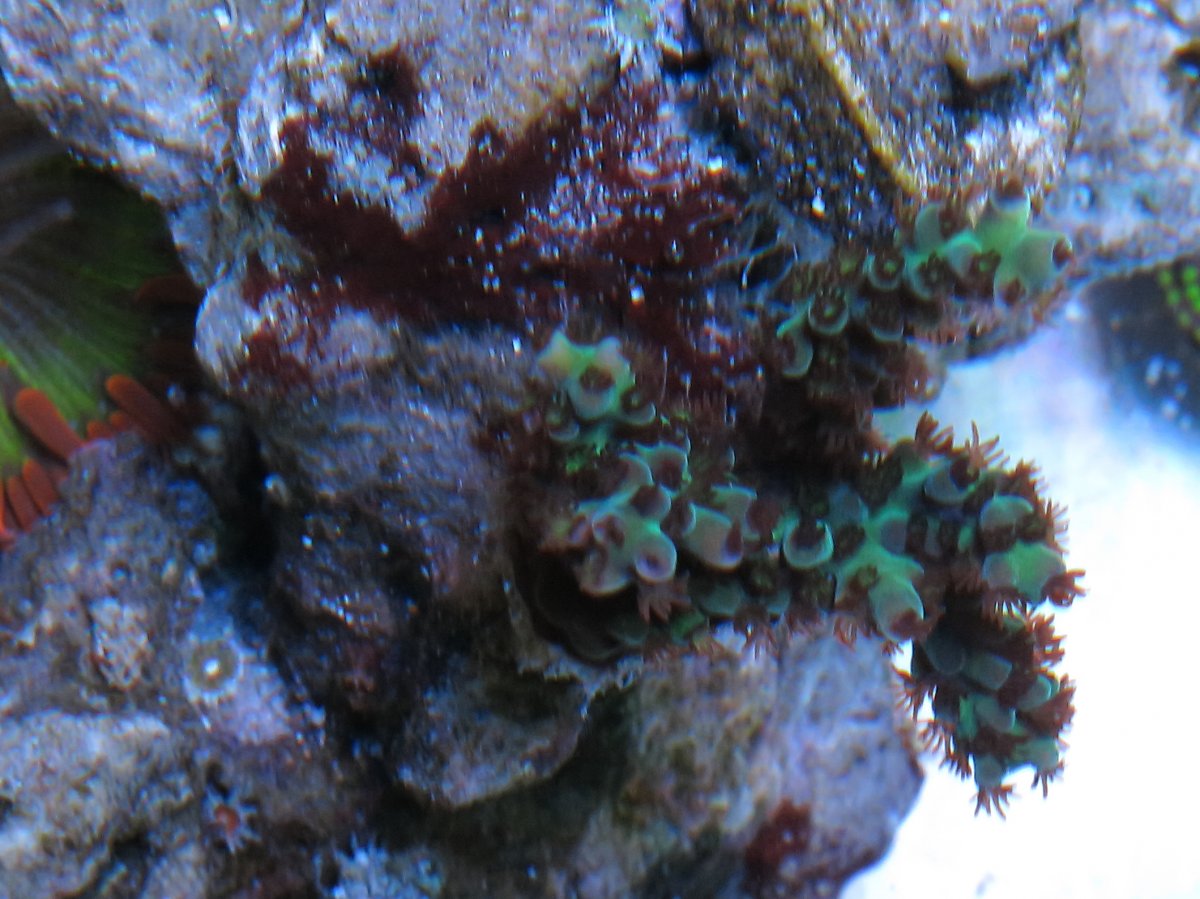 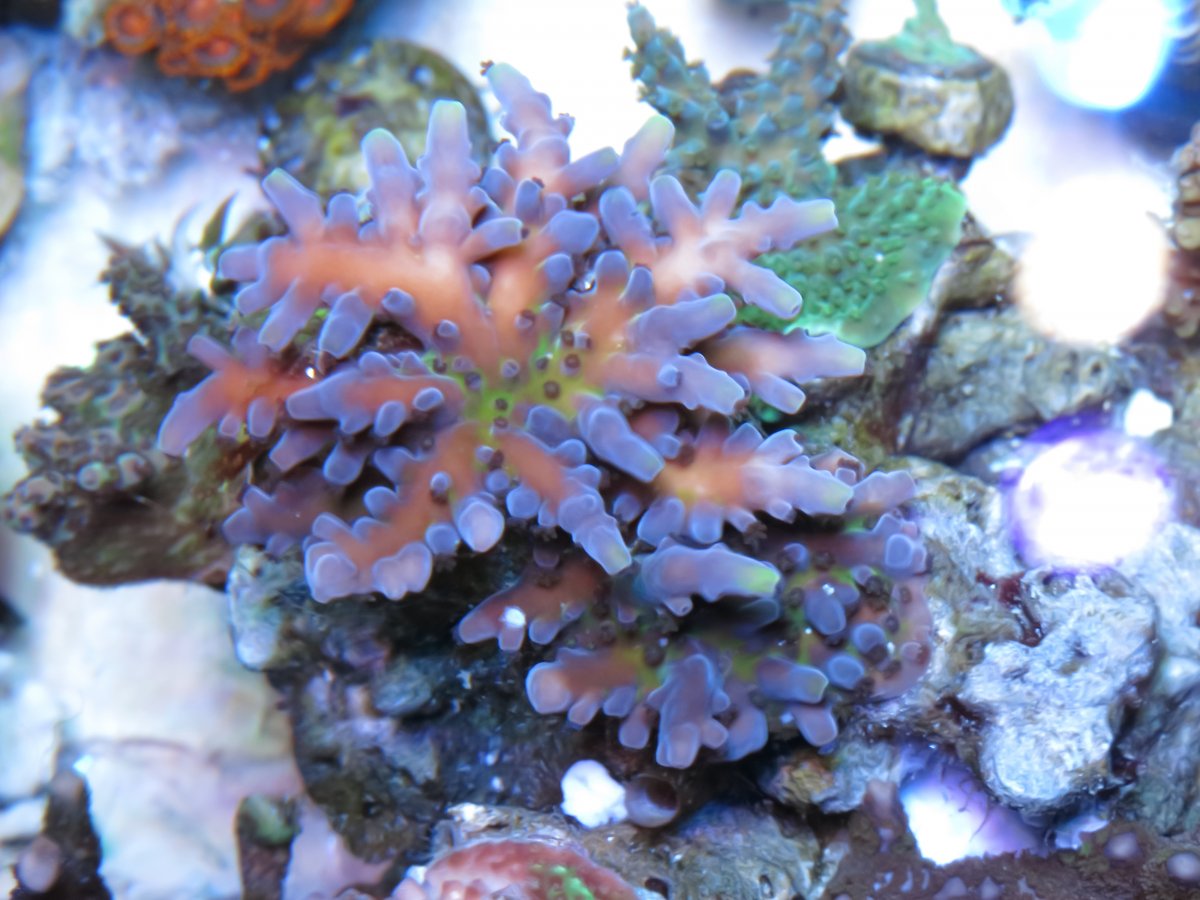 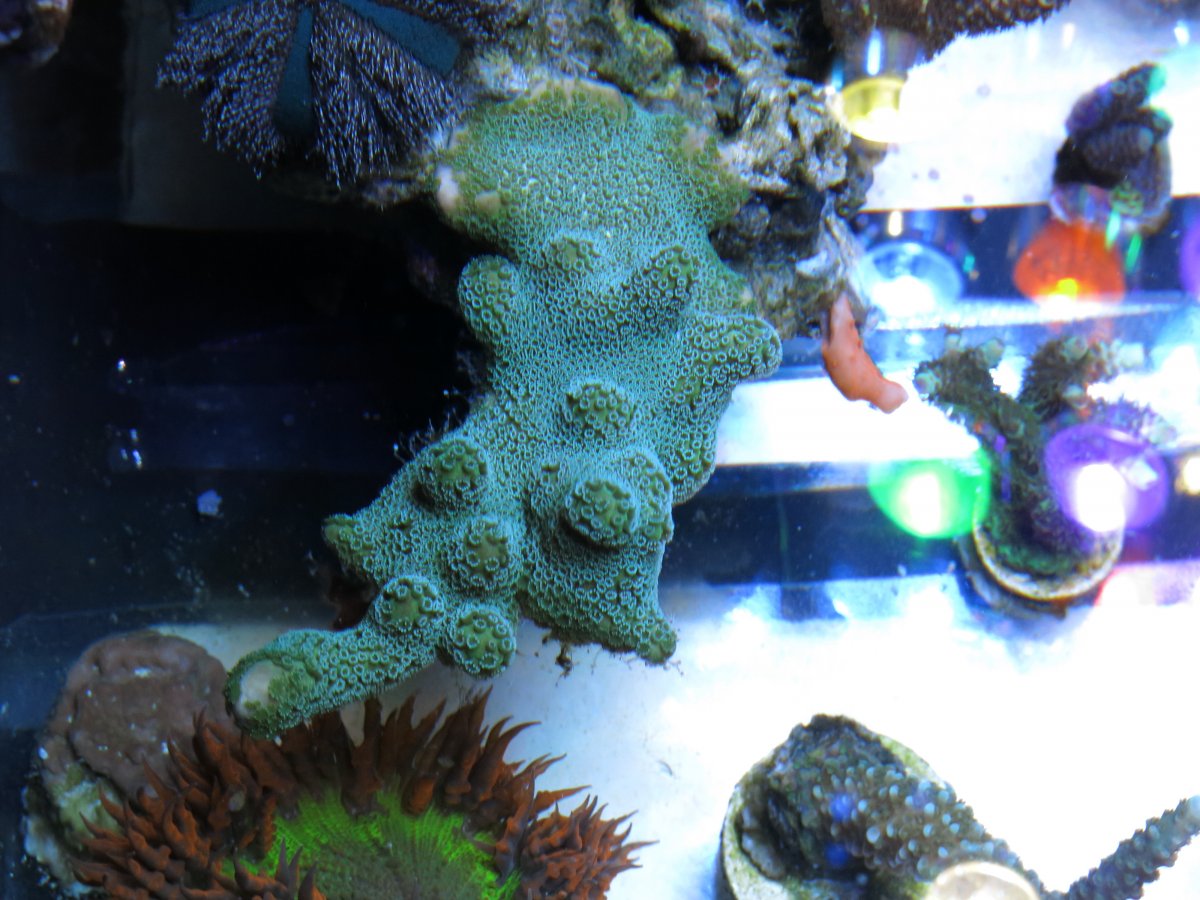 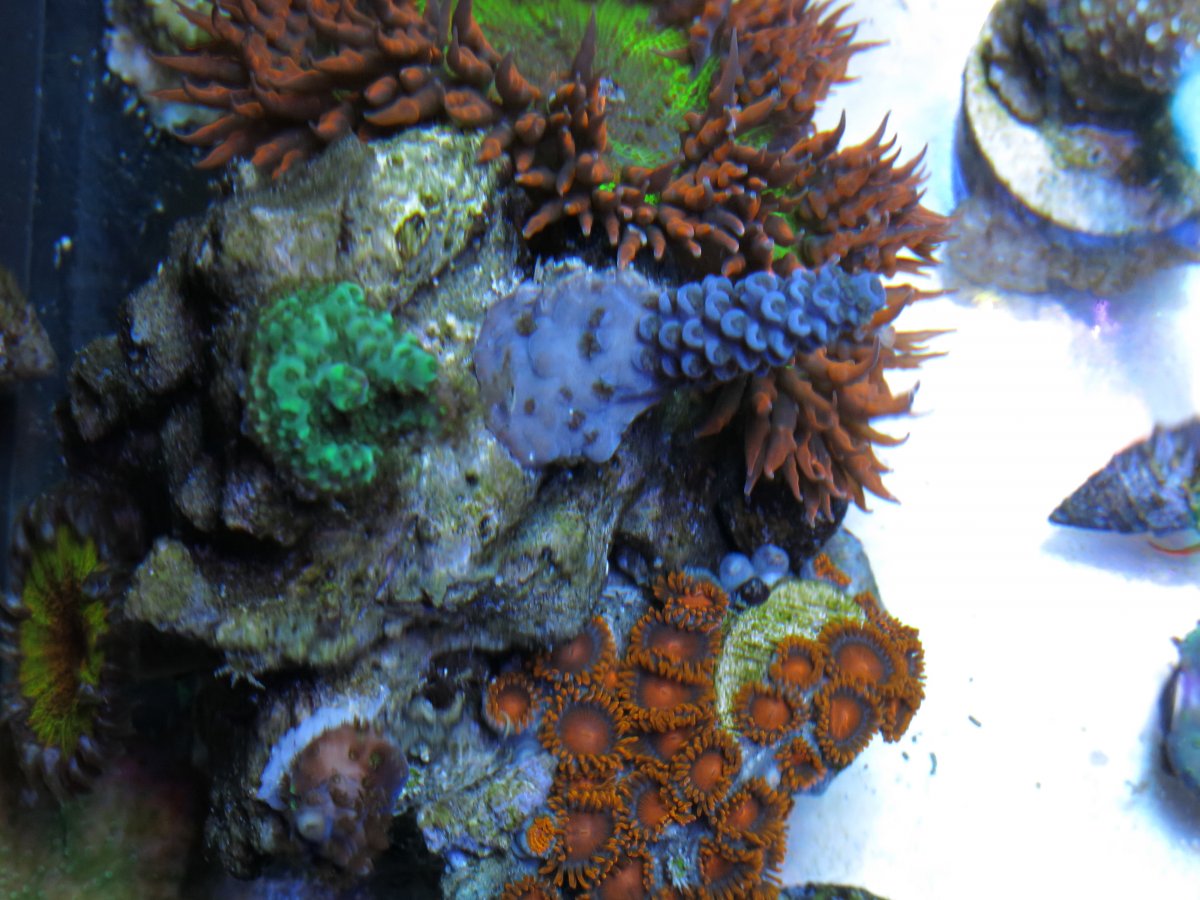 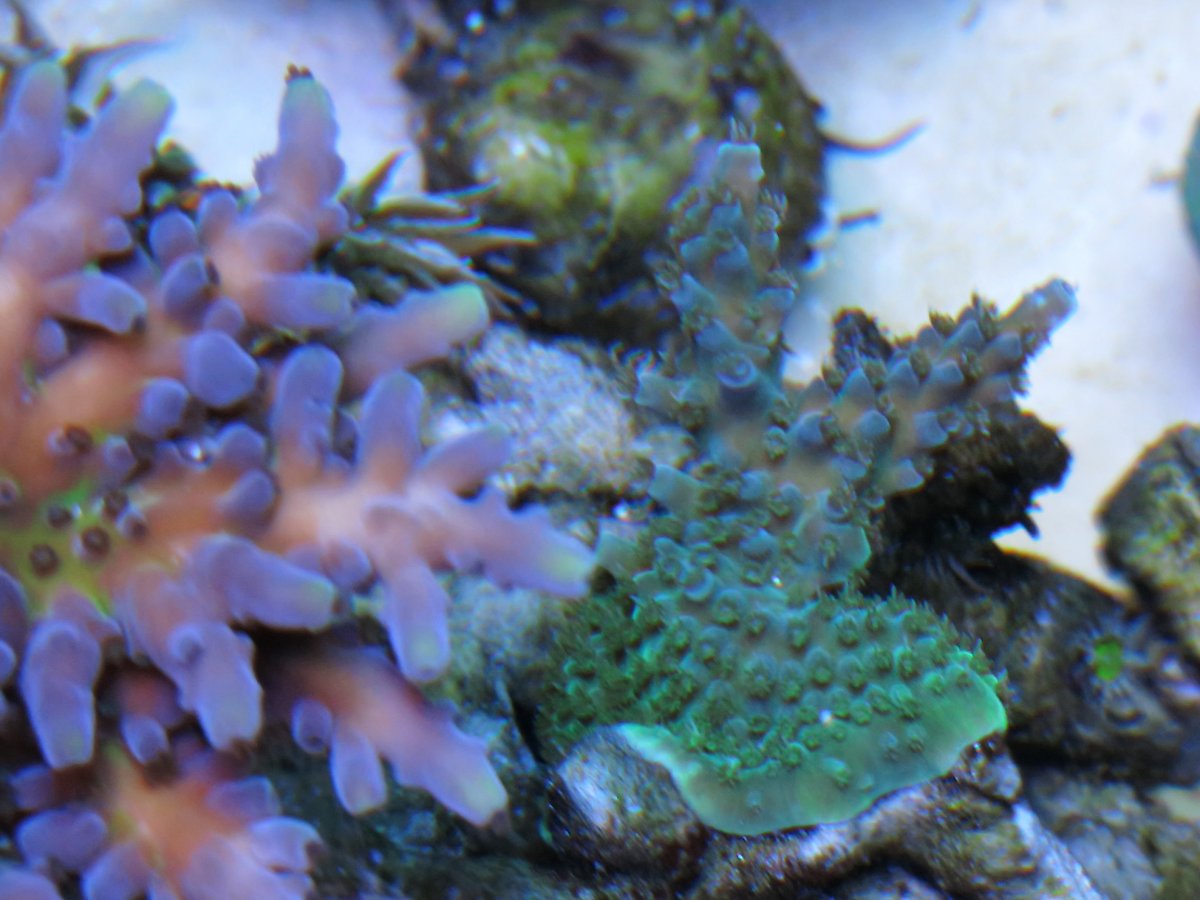 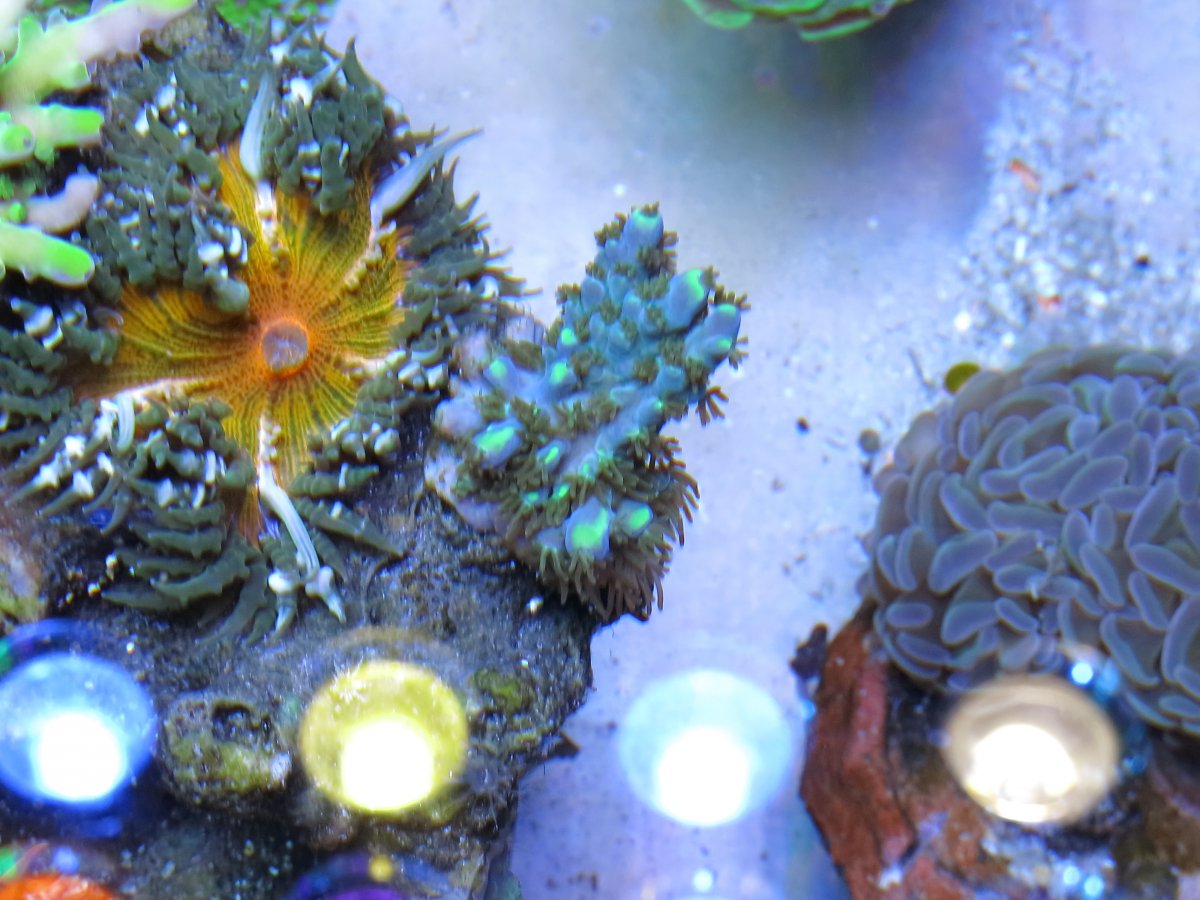 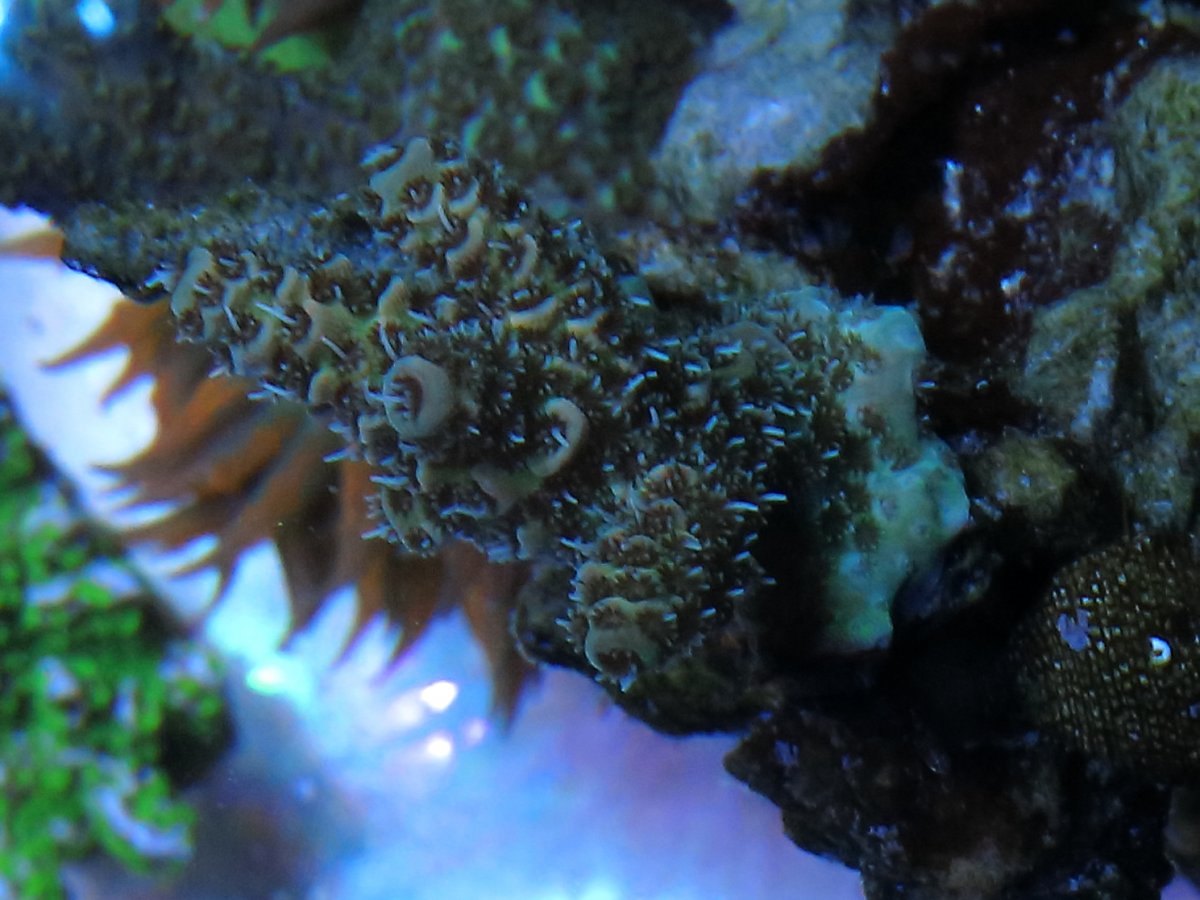 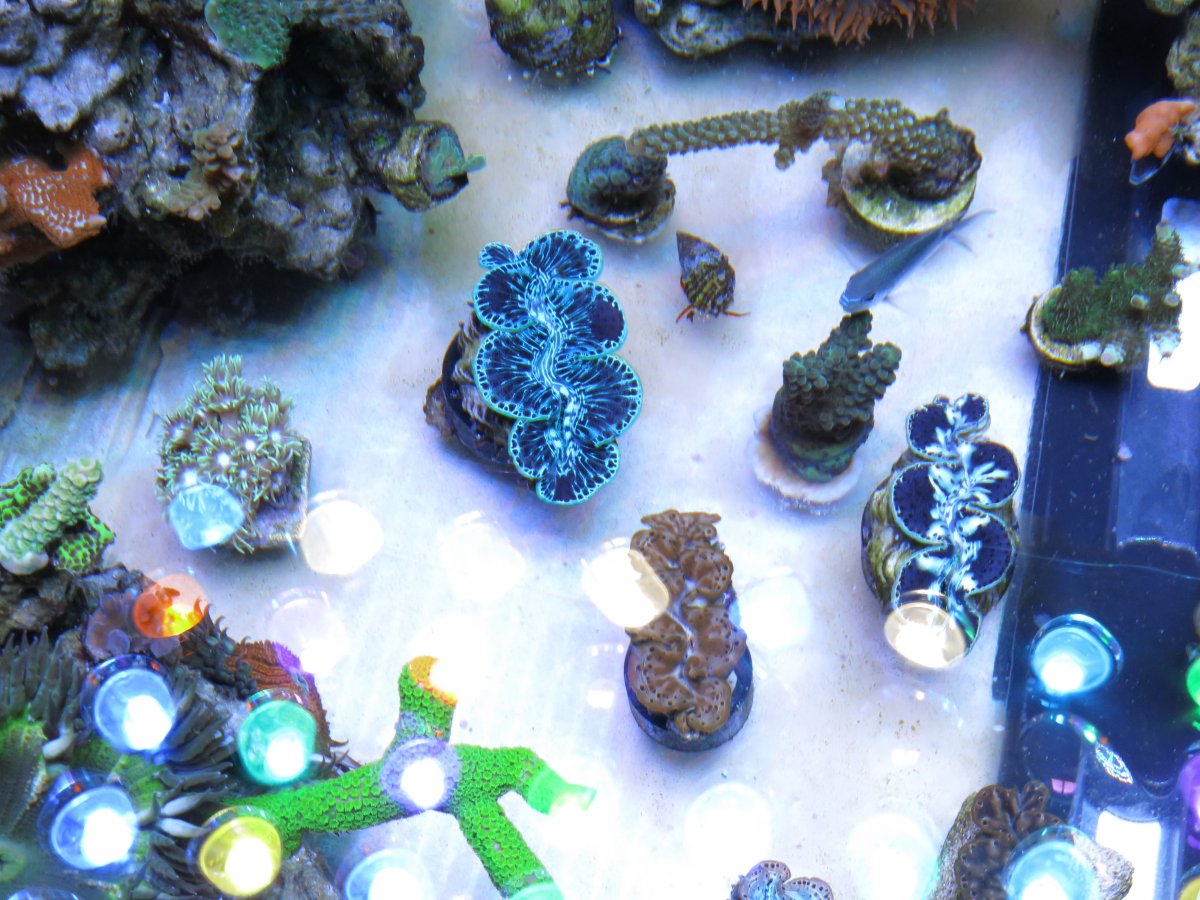 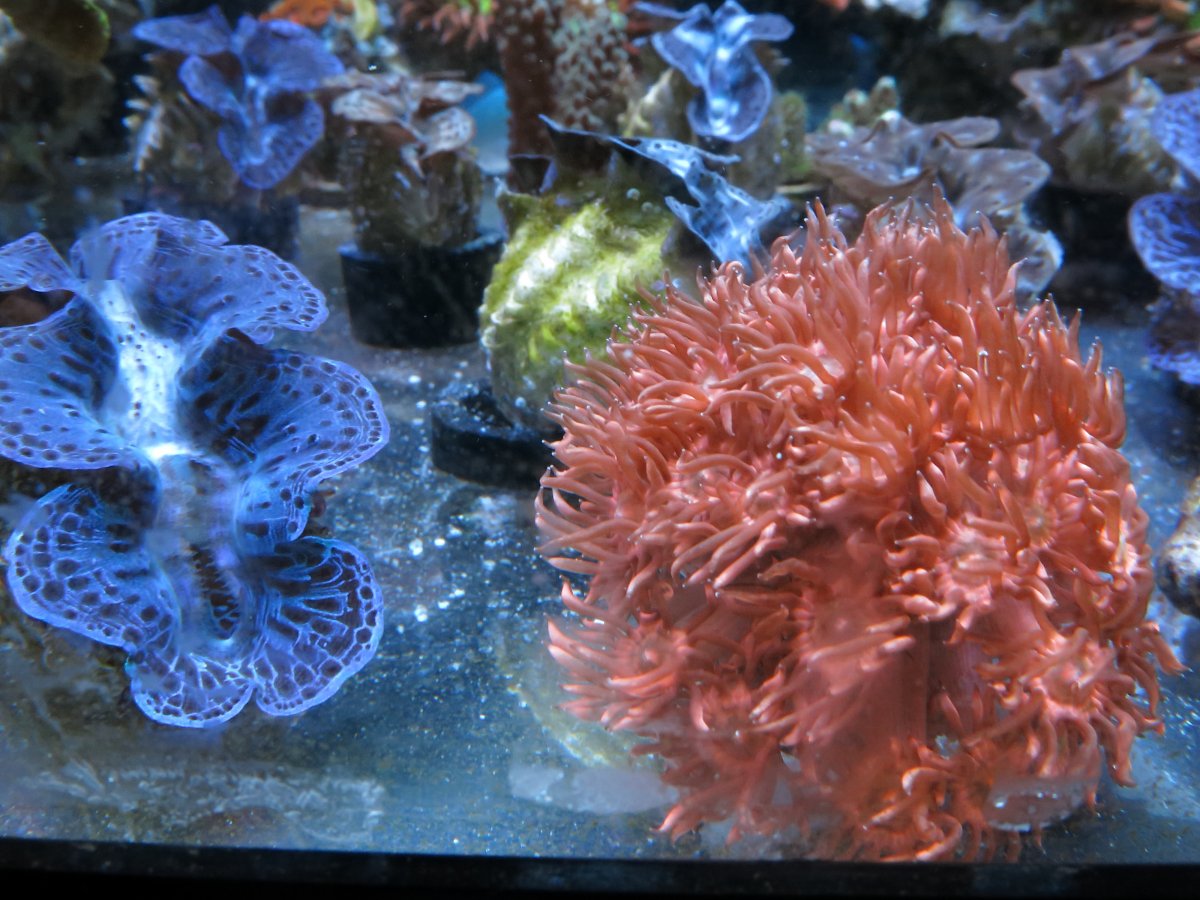 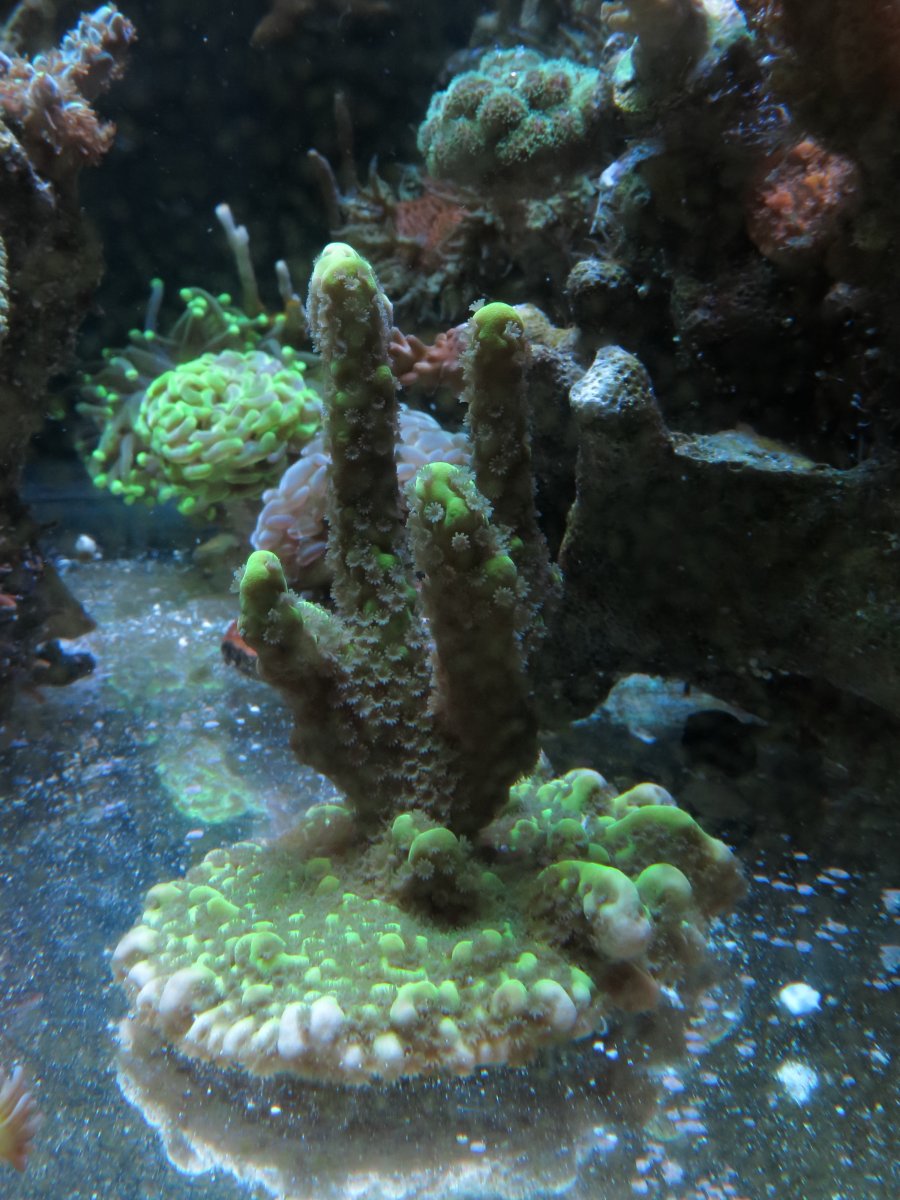 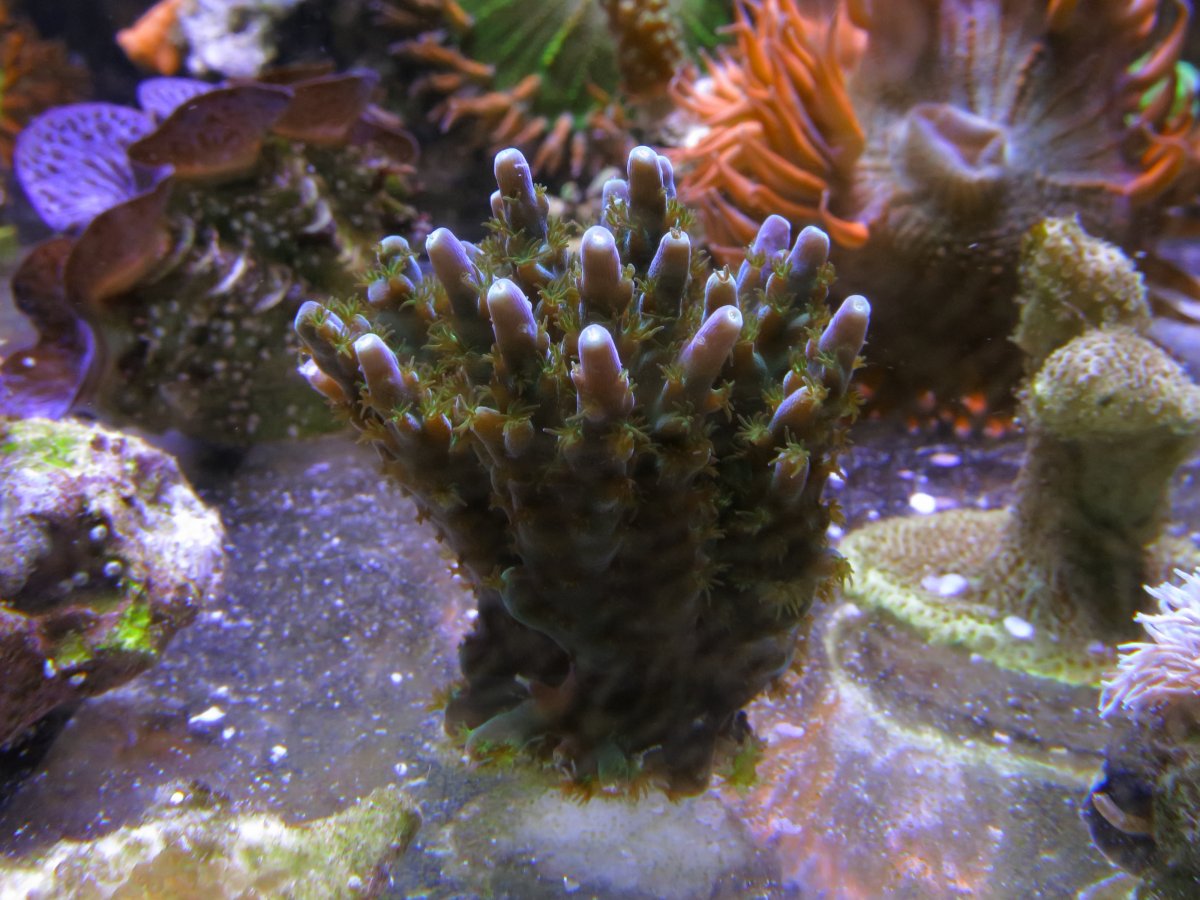 GREAT GREAT JOB !!!!! Orphek is very powerful, but looks like you got a handle on light level. I use the quick set settings
OP

vetteguy53081 said:
GREAT GREAT JOB !!!!! Orphek is very powerful, but looks like you got a handle on light level. I use the quick set settings
Click to expand...

Thank you! Lower light corals are a challange in this system, but along the side of vertical rock seems to give them enough shade.
OP

Well shoot, of course we had some severe thunderstorms last night so all those fish $$$$ will be delayed until tomorrow. I don’t think wrasse’s are the best shippers either, but nothing I can do.

Did water testing. NO3 2-3ppm, phosphate 3ppb (0.009ppm) so I will feed a bit more as those numbers are getting pretty low.
OP

So these fish are from blue zoo and LA. Blue zoo ships fed ex which here is horrible, lost my last package, delays for no reason. However the storm only delayed ups, fed ex says still deliver today, ups is the one delayed. Of course they missed the 10:30 because they always do, but that is good news! I didn’t even check fed ex until now because I figured no way they would be here. Happy to be wrong.

I guess my girl is a boy! He just grew the long fin. I guess it means he is doing well. 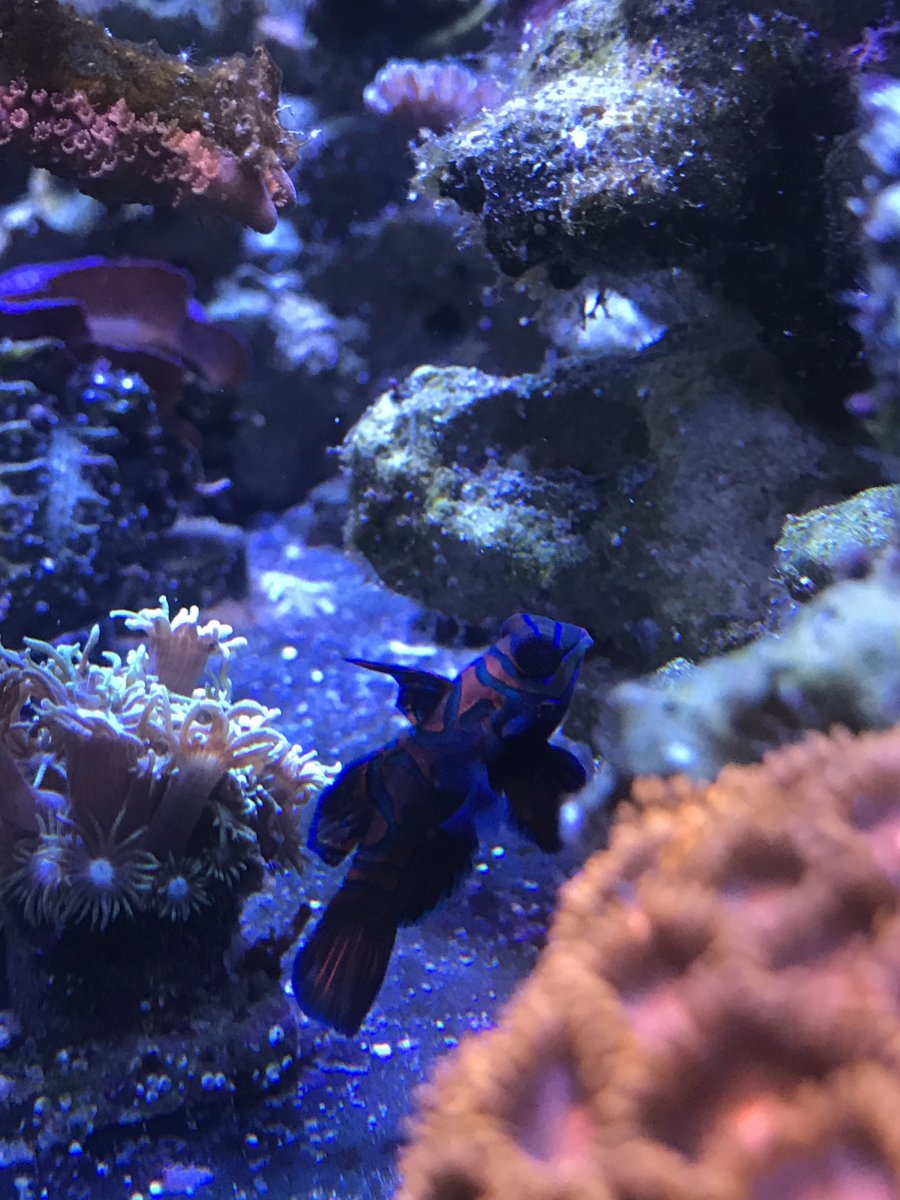 Well sadly the pink margin and the orange back wrasses are DOA. Will see how the yellow fin and McCoskers do.

The others from blue zoo look good but one of them is not so hot.
OP

“Yellow-fin Fairy”: One of the smallest of the genus. Often available at an affordable cost. While generally not overly aggressive, they will stand their ground quite well for their size.


C. aurantidorsalis “Orange-Backed Fairy”: Very saturated colors and not overly expensive, but can be prone to fading coloration in captivity. Usually peaceful with other Cirrhilabrus.

Commonly available, not overly expensive. There is wide color variation amongst the species dependent upon collection region. Peaceful.

“Fine-Spotted Fairy”: Somewhat rare in the trade. Very prone to fading coloration in captivity. Usually peaceful with other Cirrhilabrus.

“Pintail Fairy”: Prior known as cf. lanceolatus, the species is much more closely related to C. lunatus. Once rarely ever available, supply is now regular from the northern Philippians. Moderately expensive and usually very peaceful. 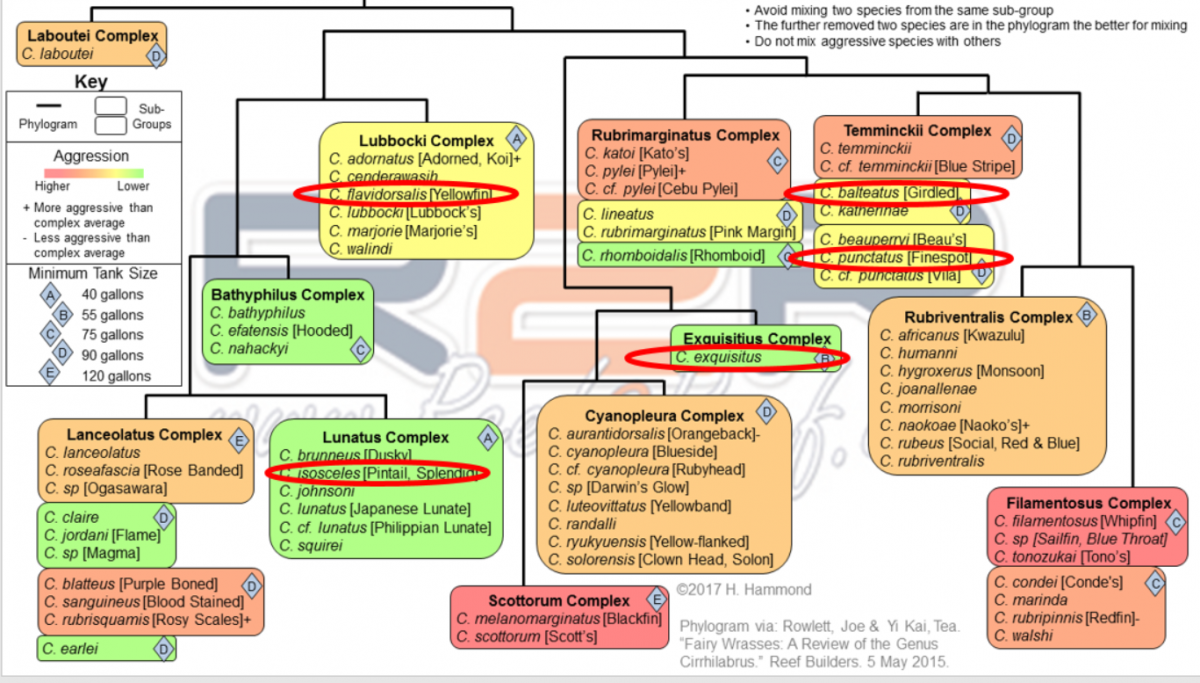 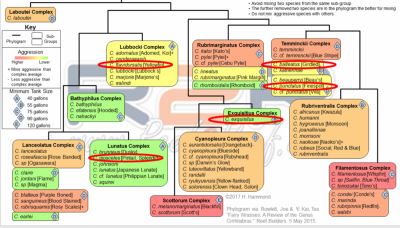 Of course the orange back wrasse is the whole reason I started the wrasse order... Even dead it was such a pretty blue.

OH and heads up, LA said they do not do refunds anymore, only store credit. They said this one time since it just changed they would refund, but not going forward.
OP

Didn't think he would make it...

Commonly available, not overly expensive. There is wide color variation amongst the species dependent upon collection region. Peaceful.
OP

So my alkatronic has been having some odd readings.

I was quite worried yesterday as I noticed the tank alk getting higher and higher before leaving work. Around 0.5dkh in a couple hours. I am thinking ok, this is an error with something in the machine or the reef is crashing, maybe a new fish died and somehow the ammonia is causing the corals to stop consuming… or something…. I could connect to the sicce return pump, so power was on and the pump was running – no issues there.

I set the calibration to hanna checker which matches salifert test well, but I wasn’t sure what was going on. Did the calibrations for pump and pH probe, and the reagent pump was really off and seemed to get worse (dispensing less) as I kept trying. I pulled out the tubing for the head and looks fine, but I ordered new anyway before I tested one last time and the tube popped off the tip it adds reagent with. Turns out somehow that had clogged. I just blew it out and the amounts are back to as new and no correction calibration needed.

I am quite curious how the mindstream will perform over time, have been thinking of getting one, although it’s a big pill to swallow since the alkatronic covers the only parameter I think really matters although if I was getting new monitor I might pick mindstream but that monthly fee…. I don’t like subscription services, I would rather buy them outright. I always think if I start adding subscription here and there I will forget about all of them and make it hard to know how much money I have. I like to look at my account and what is there remains there, not “oh I need to remember this and this and this get taken out, but is that all of them and when do they come out in the month….”
OP

I have been worried about the female girdled wrasse as while she has been active, she has not eaten anything. Tried PE mysis and LRS and Rods to no avail. I went to Petco and picked up a variety pack. Wow she went nuts for brine shrimp and bloodworms. So relieved she started eating!


I have not seen the yellowfin since I put in the tank. No idea where it could be hiding....
OP

Did my water testing yesterday:

Numbers look good. Having more algae, so ordered more snails and crabs. It appears my berghia didn’t work very well. I have seen one or two at night, but they don’t seem to find the aptasia well. Decided to just get peppermint shrimp as I have used in the past. I ordered the CuC from reeftopia, I hear good things and used them before, but it’s been a long time ago.


Also now that fish places only seem to give store credit placed order for more wrasses to use the credit for the other losses. Getting another Exquisite and female girdled from BZ, Ruby head, female hooded and female red fin from LA. Fingers crossed they ship ok this time.

Mandrin looks to be fat and healthy. Been fun to see him grow. Have not tested in a while. Alk 7.6, 5ppm nitrates and 0.036 phosphate. I might passivity run some gfo, numbers are fine but corals are a bit brown. 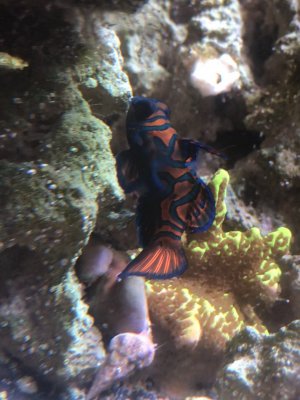 Reduced the doser for calcium/mg and will let those drop a bit. For the next 2 part I am going to drastically reduce the Mg in the calcium part, depending on levels I might even just make the whole calcium part half strength.
OP

Quick iPhone fts and side. 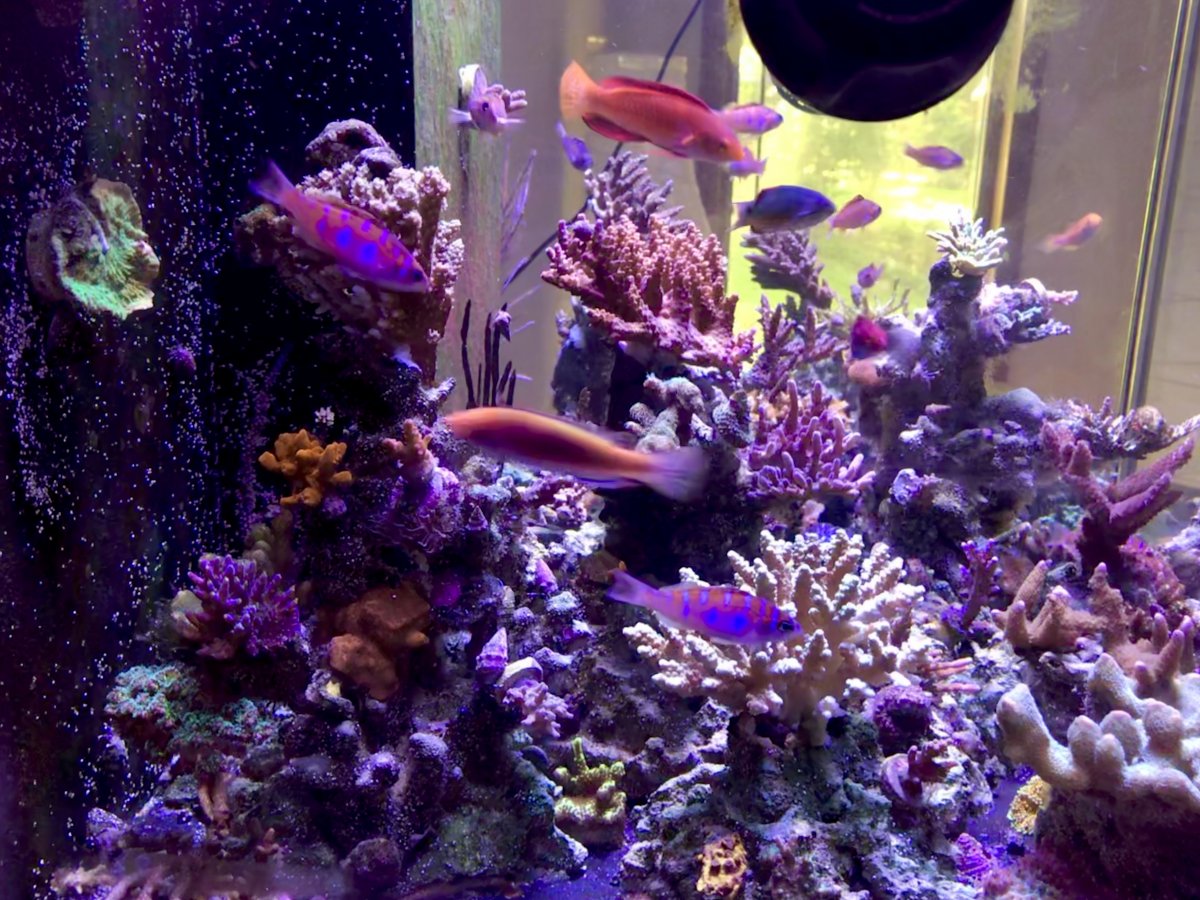 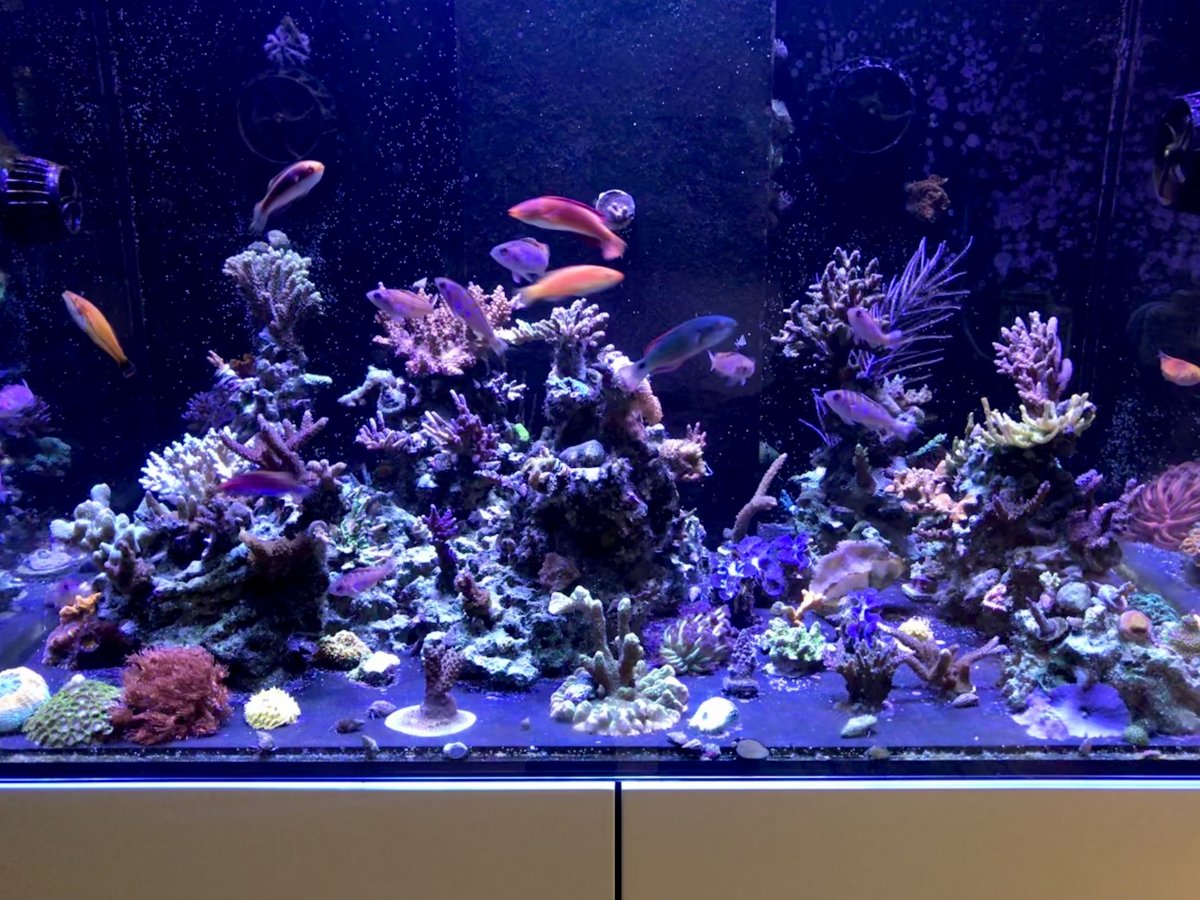 Need to get out my camera for proper white balance but some quick shots.

Neat pink colors on this guy. It hard to see in pic. 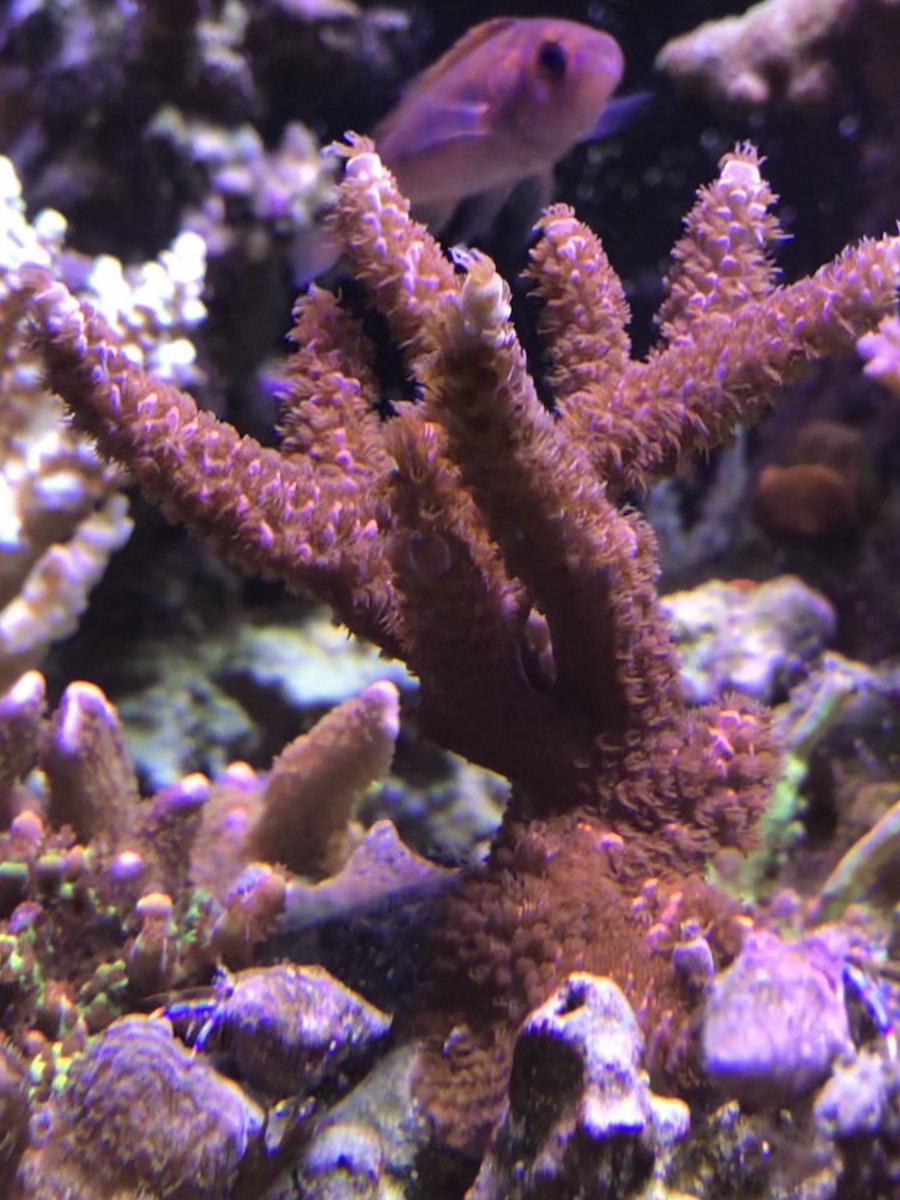 These two growing on the bottom have done well. Nearly touching. 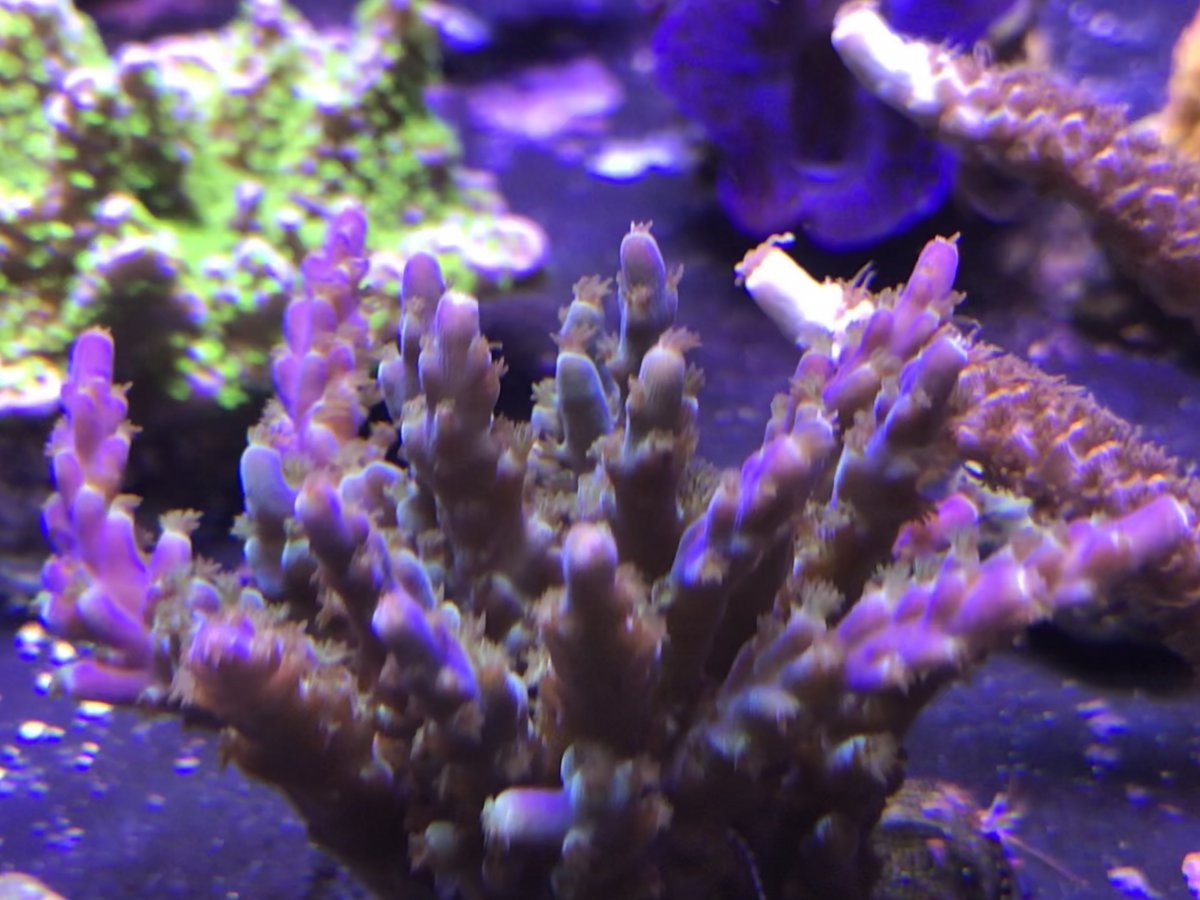 This acan(?) was a single polyp freebie at some point. The heads on side have green and yellow centers which I couldn’t capture well. 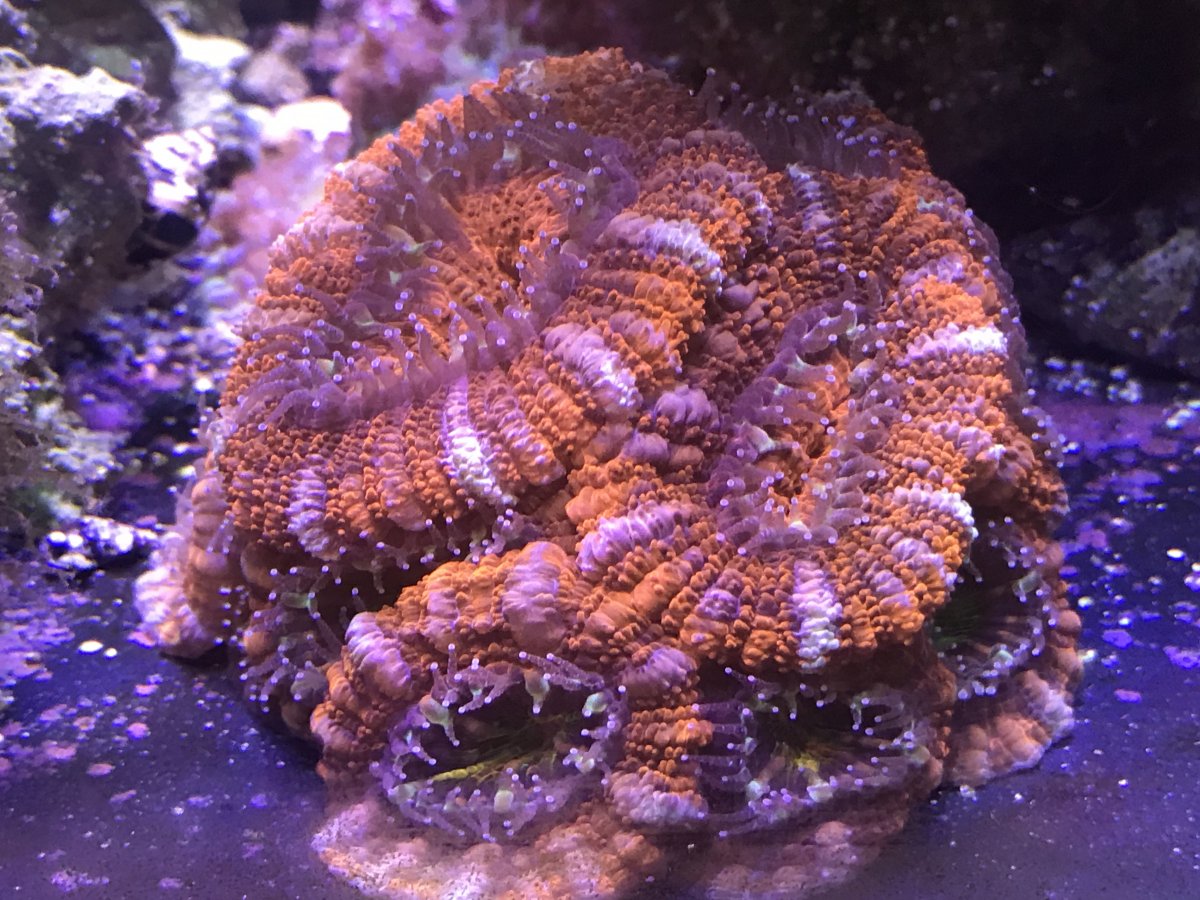 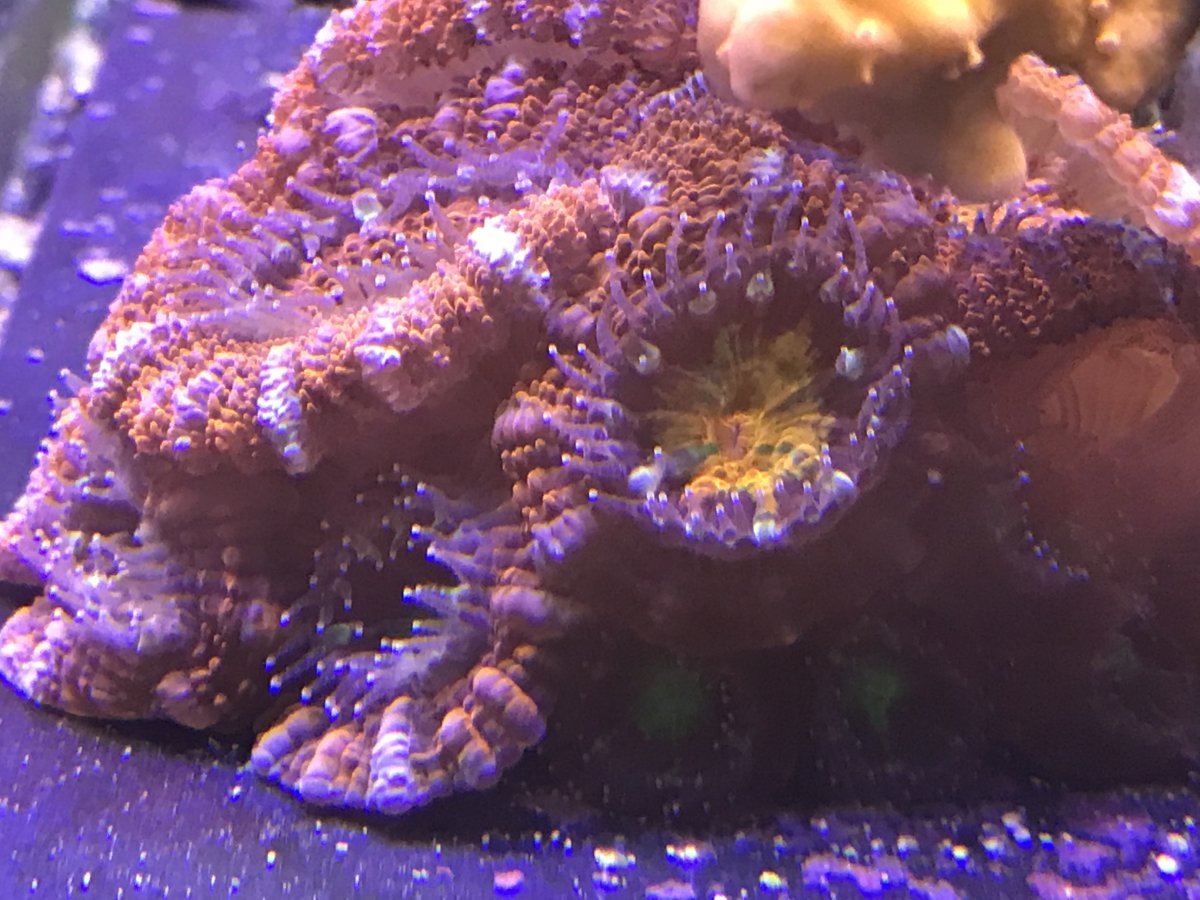