A relatively new reefer here. I am setting up a Waterbox 130.4 so I thought I would document my journey. It may benefit someone who is doing the same and also I can solicit some advice from more experienced reefers here.

The tank is going in my home office so I will be looking at it all day behind my computer screens.

2. I have a one-year old 24-gallon all-in-one. I will be moving the fish and rock to this tank. I am also thinking of moving the sand as well. I think it will help in cycling the tank quickly and getting all the beneficial stuff from the old aquarium. I thought I once read on some other thread that one should not move the sand. I wonder why? I know a lot of detritus is probably settled in there so I plan to rinse it well in the saltwater. Also, moving from 24 gal to 130 gal, even if I get some detritus with the sand, it won't be a big deal in my opinion since the dilution will be big. 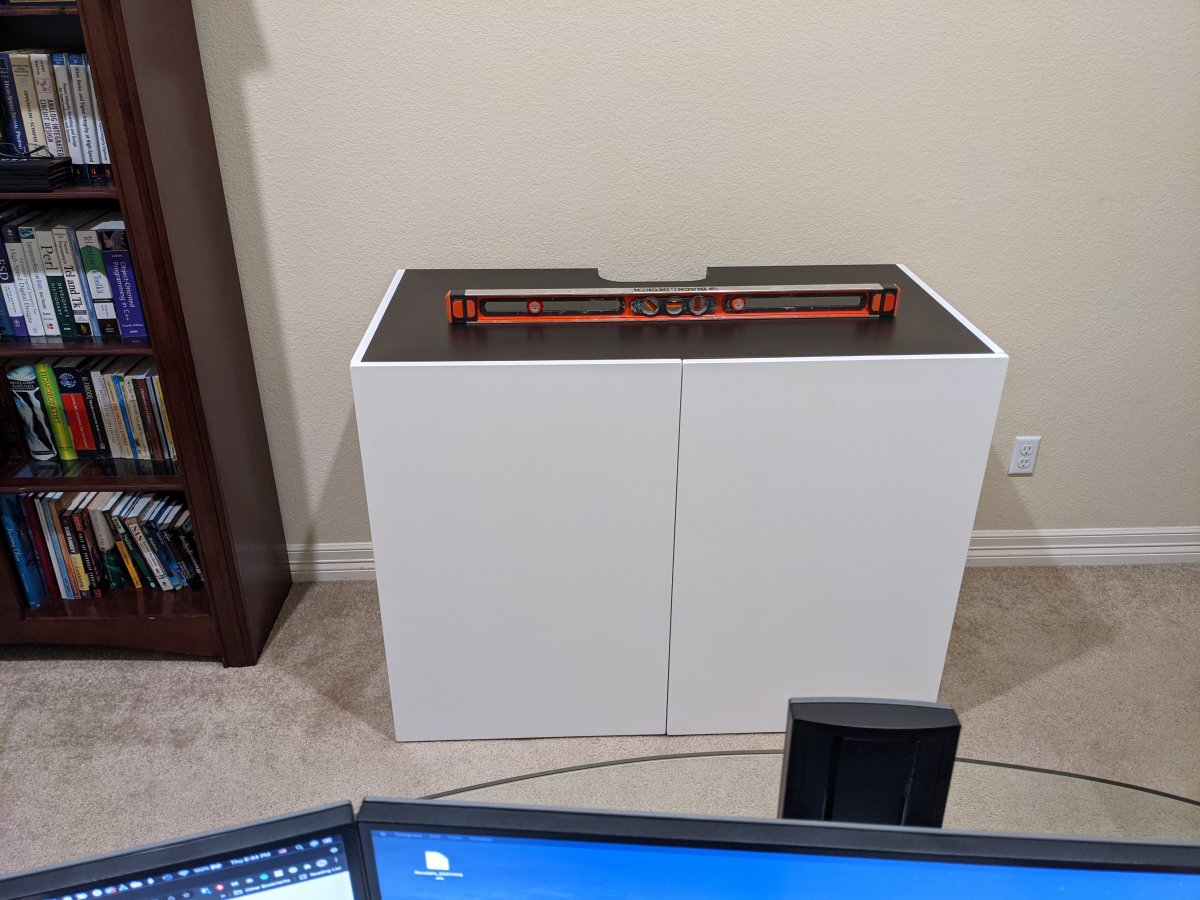 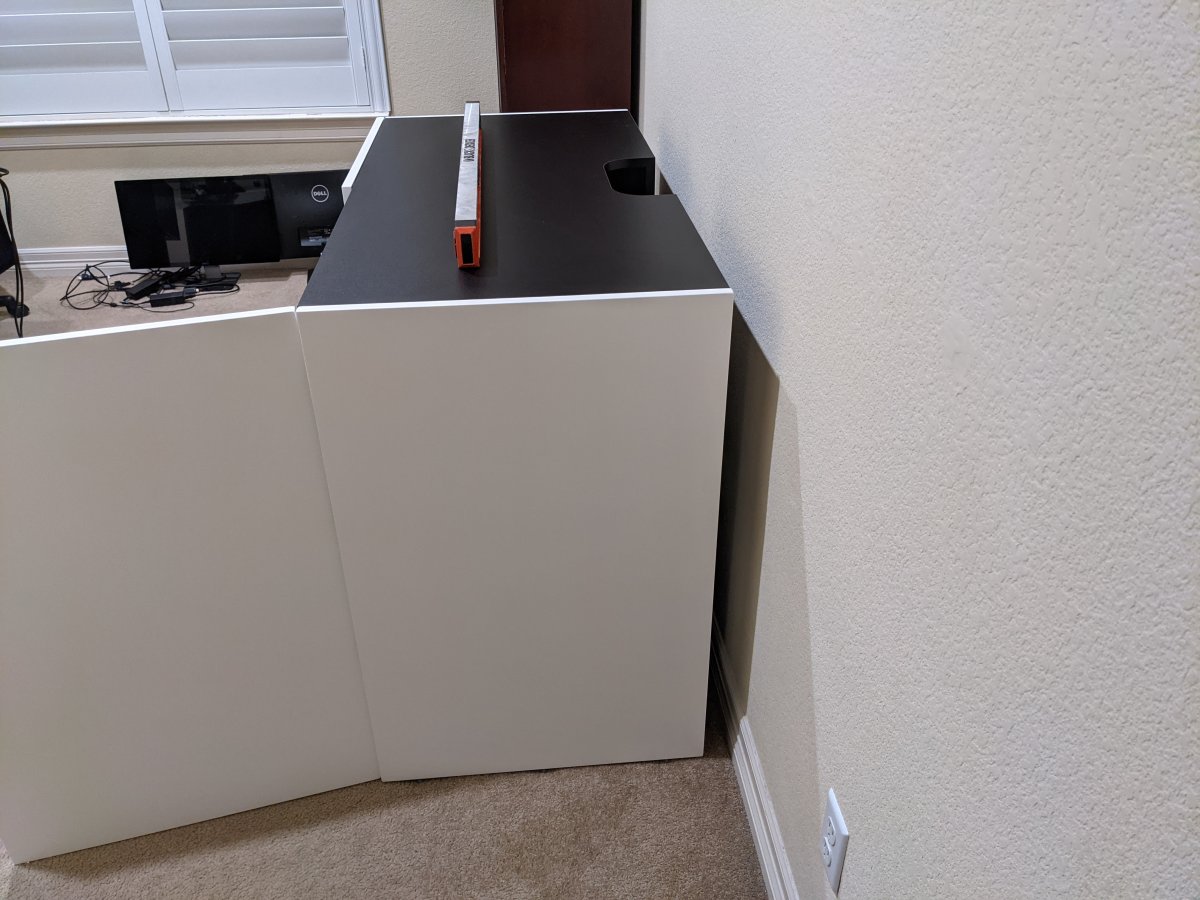 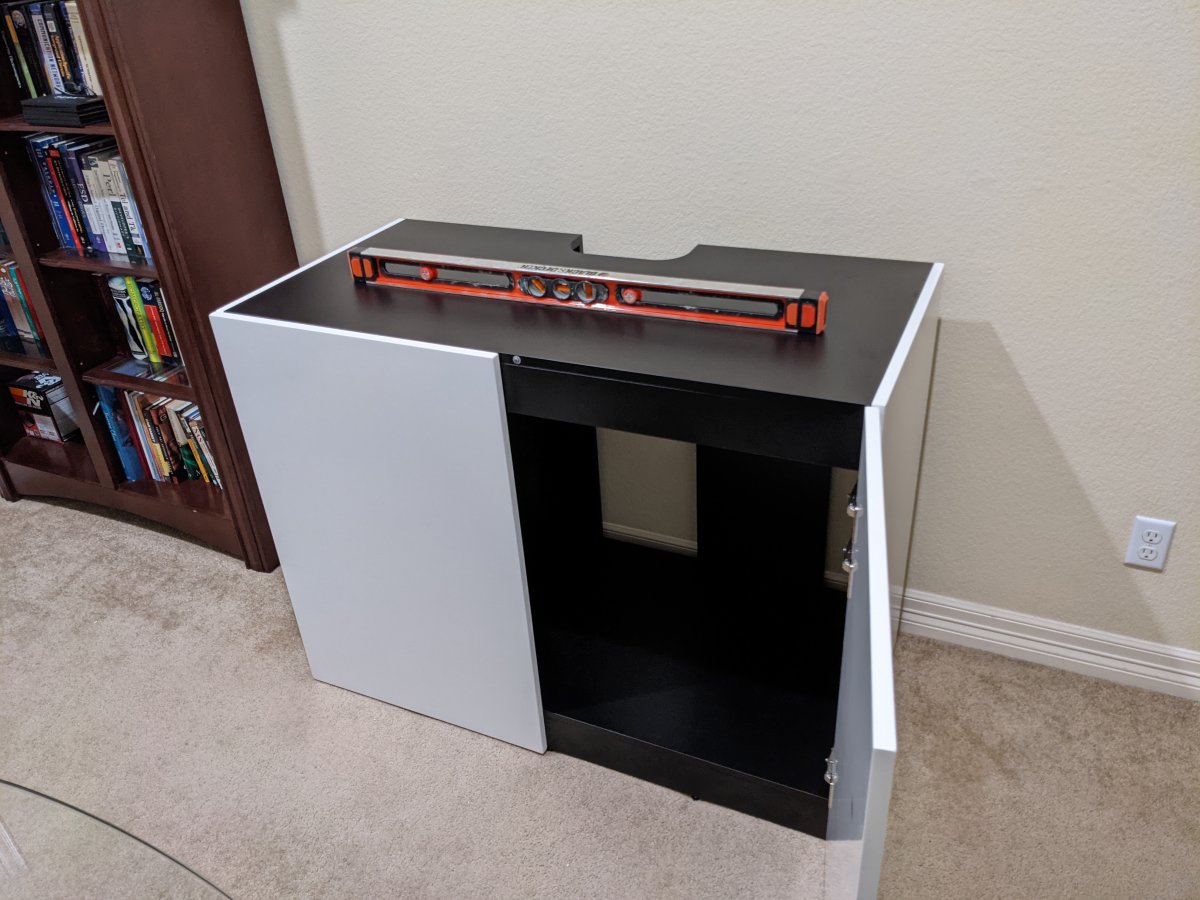 That’s going to be a lovely tank. I left almost 12 inches or so behind my tank but mine is 8ft long. If you can reach anything you may need to with three inch’s then you’ll be ok. Ok on the sand. People say don’t transfer it because it’s a litter box. You have three options. 1) vacuum it really good then move and let it settle in new tank. This may require a 50 percent water change. 2) rinse it it really good you will lose benifical bacteria but it will be safe and quickly kickstarted with nitrifying bacteria from your rocks. 3) last option by new sand.
when I was in the navy I just vacuumed it moved a lot. Had no problems but those we just fowlr tanks.
Last edited: Nov 25, 2021

I left around 5" behind mine. I came to that number by seeing how far I needed to leave it out from the wall to put my entire arm (shoulder deep) behind the tank with a little wiggle room.
OP
T

Thanks guys. Left it with 3 inch space. May regret it later
OP
T

Tank is finally on the cabinet. Got 3 friends to help me move it from the garage to my room. Used 4 of these suction cups to left it and place it on the dolly. Rolled it to the front stairs, up a couple of steps and back on the troll. Then rolled it to the room. Lifted and placed it on the cabinet. Took 10 mins or so. I would strongly advise you to have 4 guys lift it. 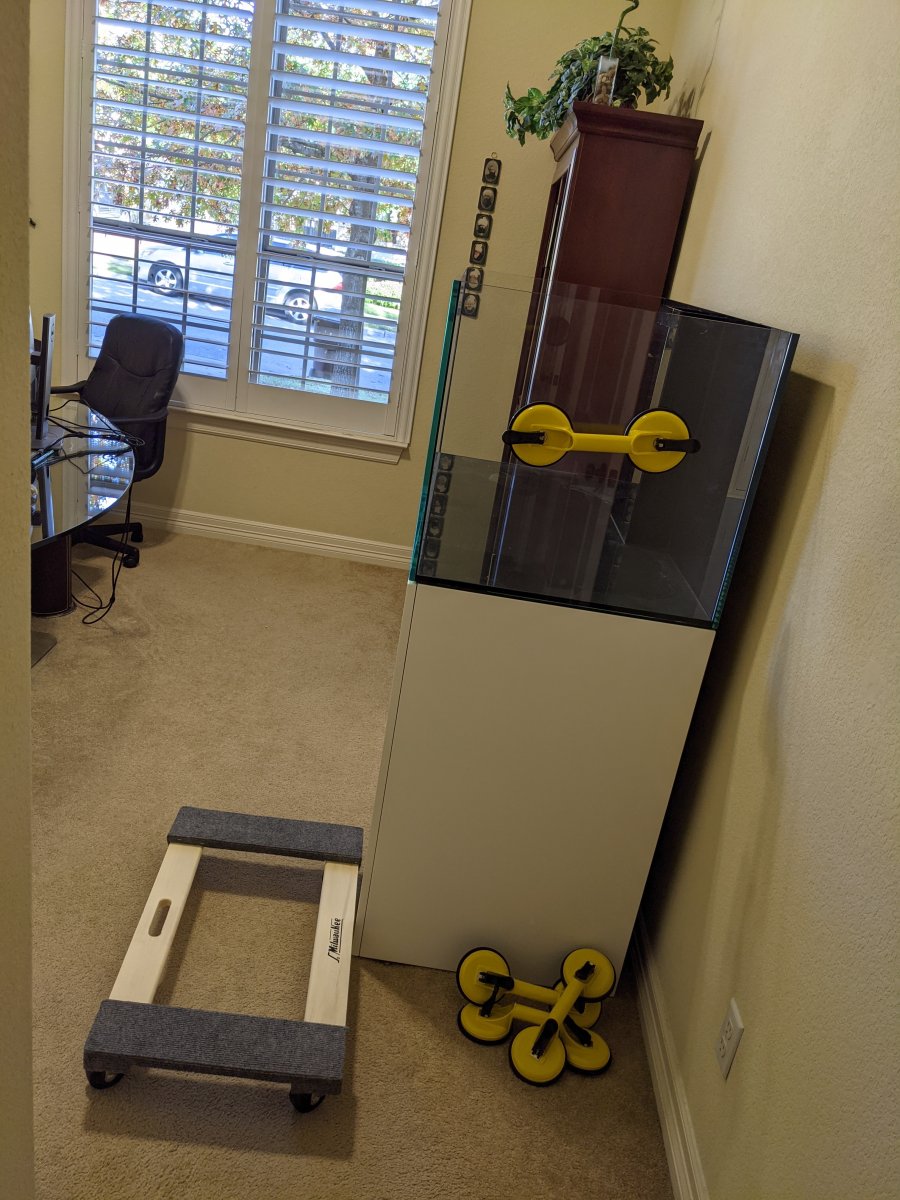 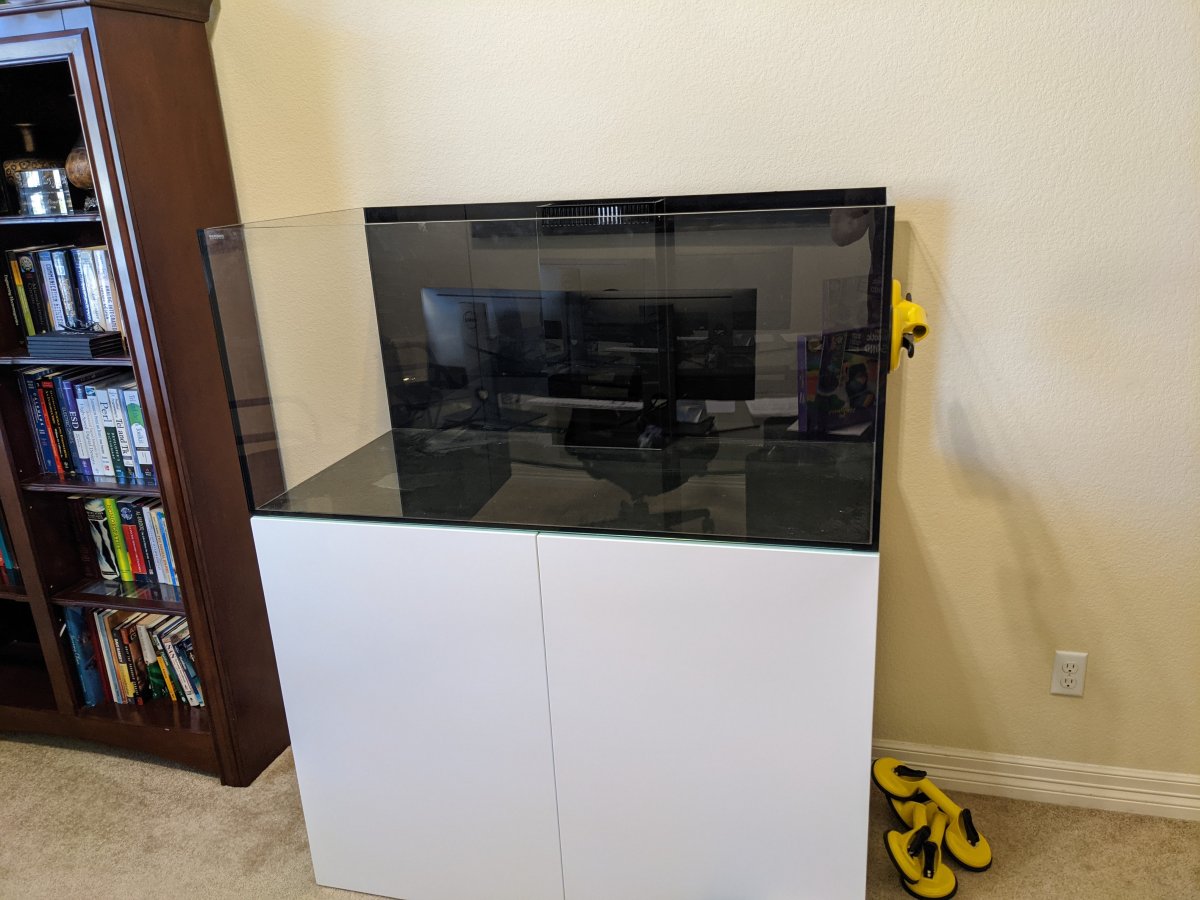 Nice! Those suction cups make life so much easier. I have moved my RS Reefer 450 with and with out them and its a real pain without them!

I think if you had a deep sand bed, it would not be wise to reuse. If it was like 2" or less, and going from a 24 gallon to a large tank, I would reuse it, granted its cleaned out really well. I think I saved 80% of my sand from my 40g breeder to my RS Reefer, then added about 30 to 40 more lbs to it. I made sure it was clean by rinsing with salt water until it didn't release visible detritus when disturbed. I think I left just a little bit left in the old tank and tossed it since that 10-20% likely had 80% of the bottom muck in it.

Took me a couple of days to modify the Waterbox sump. Basically, I didn't want to use the filter socks. I never had them in my all-in-ones and from what I have read everyone hates them and I want the tank to be as maintenance free as possible. So, I decided to remove the filter sock holders and baffles.

I used a thin guitar string, blades from my algae scrapper, and an X-acto knife. Even with gloves managed to cut myself three times lol (nothing major). Just go slow and try the guitar wire first as far as you can go. However, sometimes the gap between the glass panels is too small to even fit the guitar wire, then switch to the razor blades (from my scraper). That only goes so far because the blade is thin and it bends and is dangerous. Finally use the exact knife. As you cut more, you can apply some pressure on the glass panel. This allows you to get a little deeper to cut some more and then bend more to get deeper.

Once you get all the baffles off, scrape off the remaining silicone with a blade. However, that still leaves a thin film of sticky residue on the glass. I used alcohol and a scrubbing pad to get most of it off but some of it is too stubborn. Then I used a dremmel with felt pad (dipped in alcohol) to get the rest of it off.

I also wanted to run a refugium for nutrient control and also because I like to have a mandarin in the future.

So, I drilled a few holes in the wall between the ATO and skimmer chamber. I decided to use the sock silencer that comes with the Waterbox sumps as a weir so the stands of algae cannot float down to the skimmer chamber. I drilled four holes and the size of the holes perfectly fits the sock silencer to hold it in place. I got some scratches from the drill when making the first hole as I didn't have the correct technique for drilling. Oh well, its in the sump so no big deal. The trick is not to jam the drill straight down when starting the hole. First, hold it at an angle to get a little bit in the glass then slowly straighten the drill otherwise it will not stay in one place. 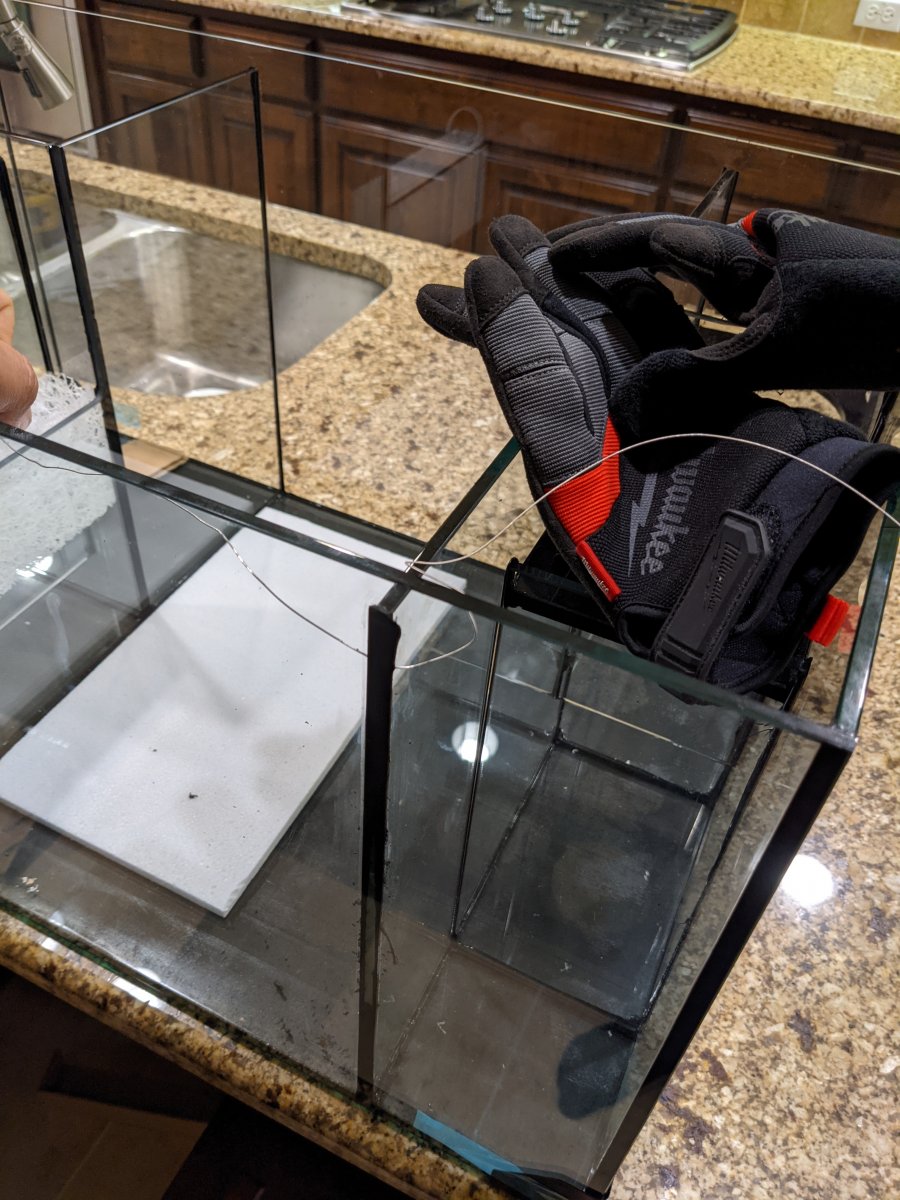 Dremmel with felt pad and alcohol to get the slime off. 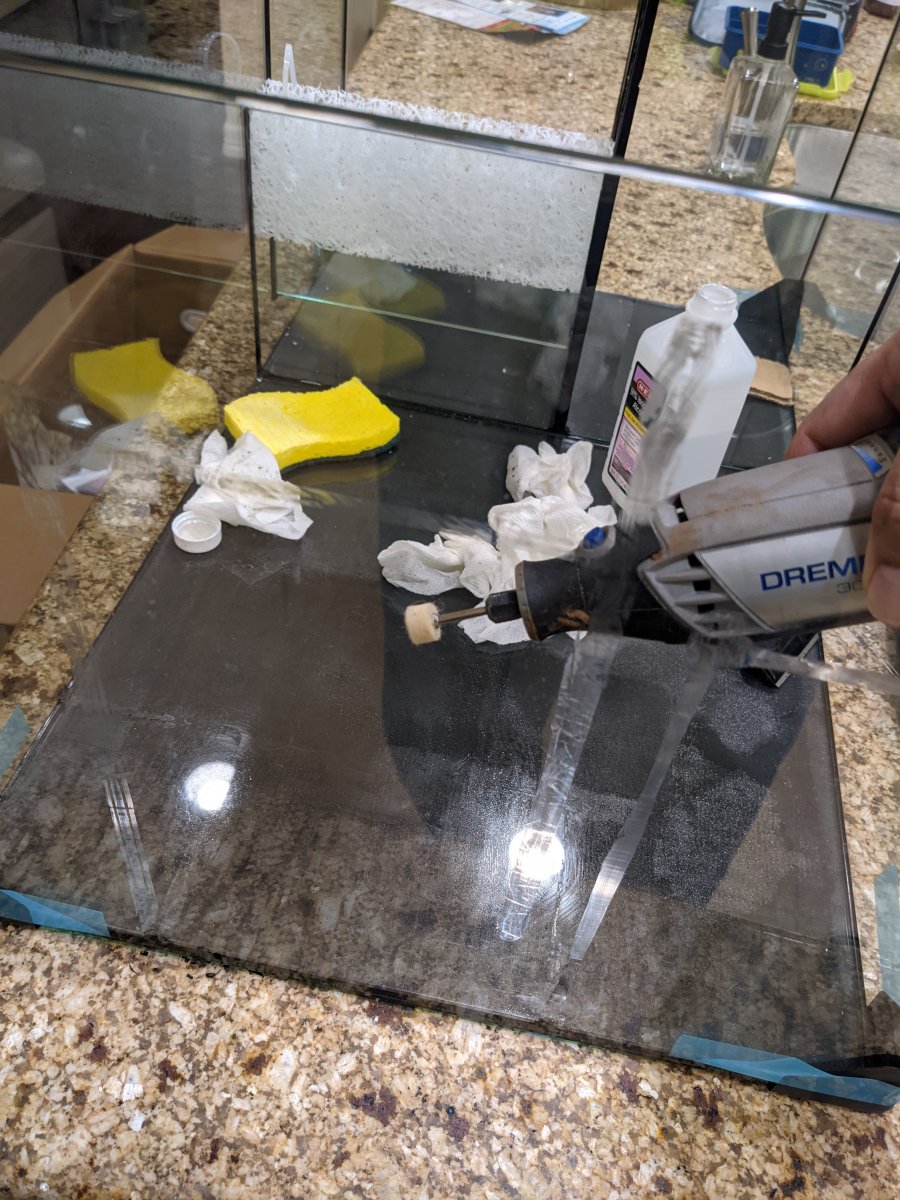 the tools I used. Guitar wire, blade from the scraper (take it out of the scraper), X-acto knife, scrubbing pad, alcohol, dremmel with felt pad 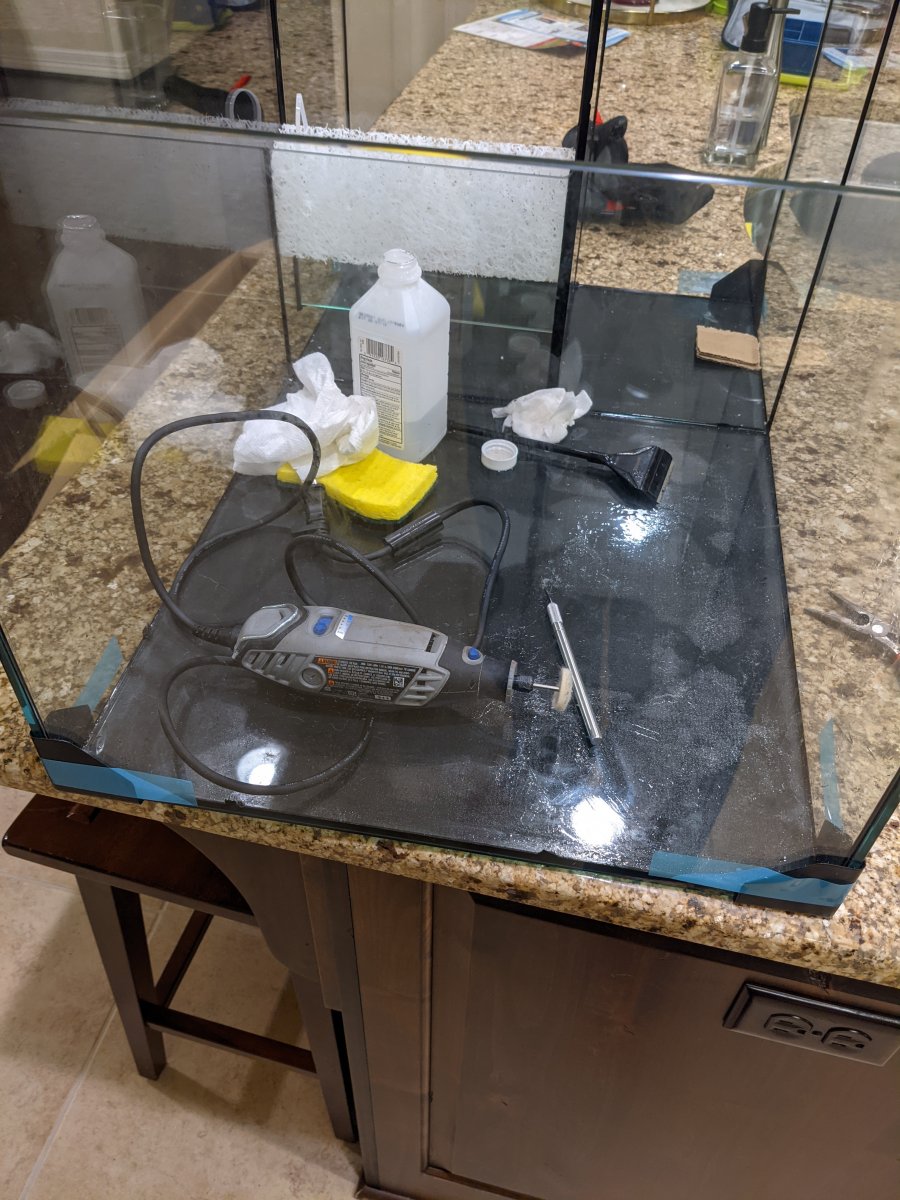 After I removed the baffles and cleaned up 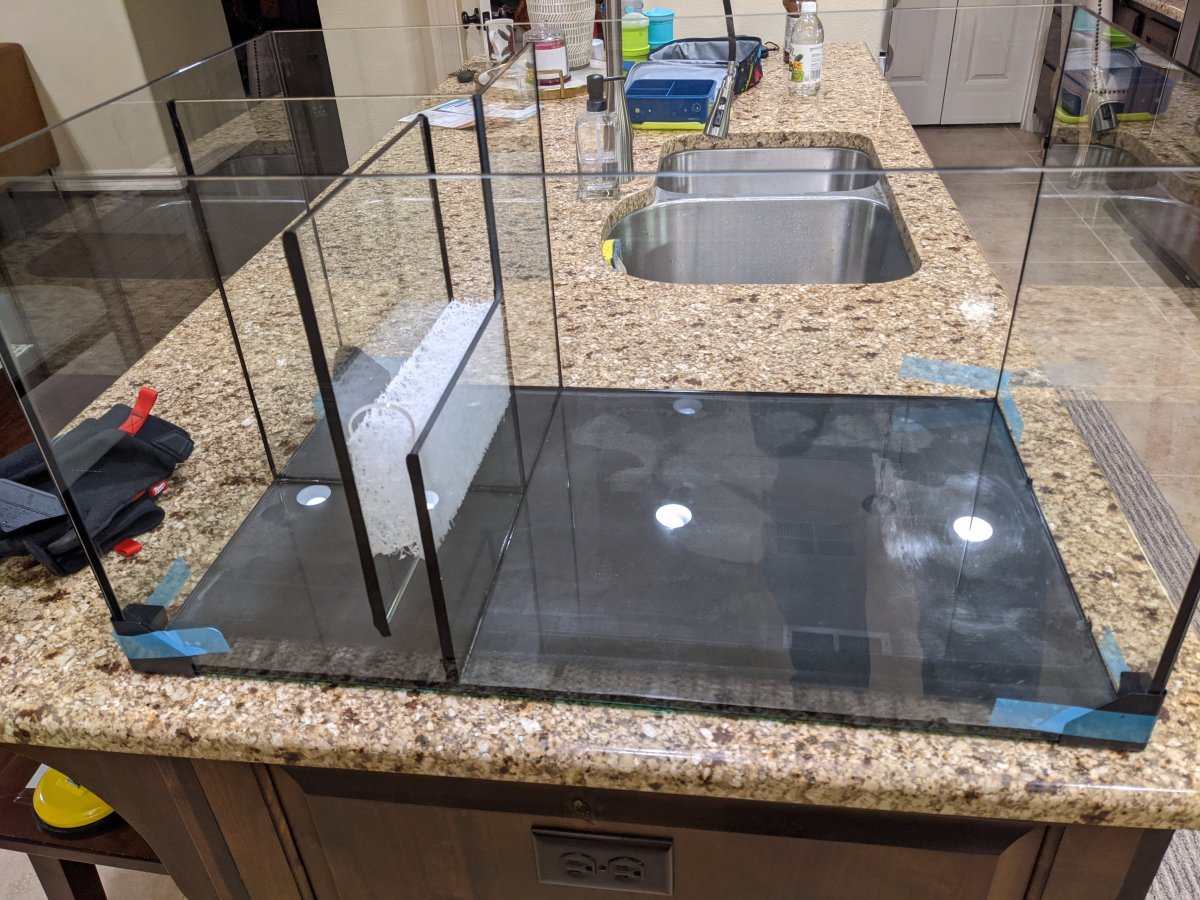 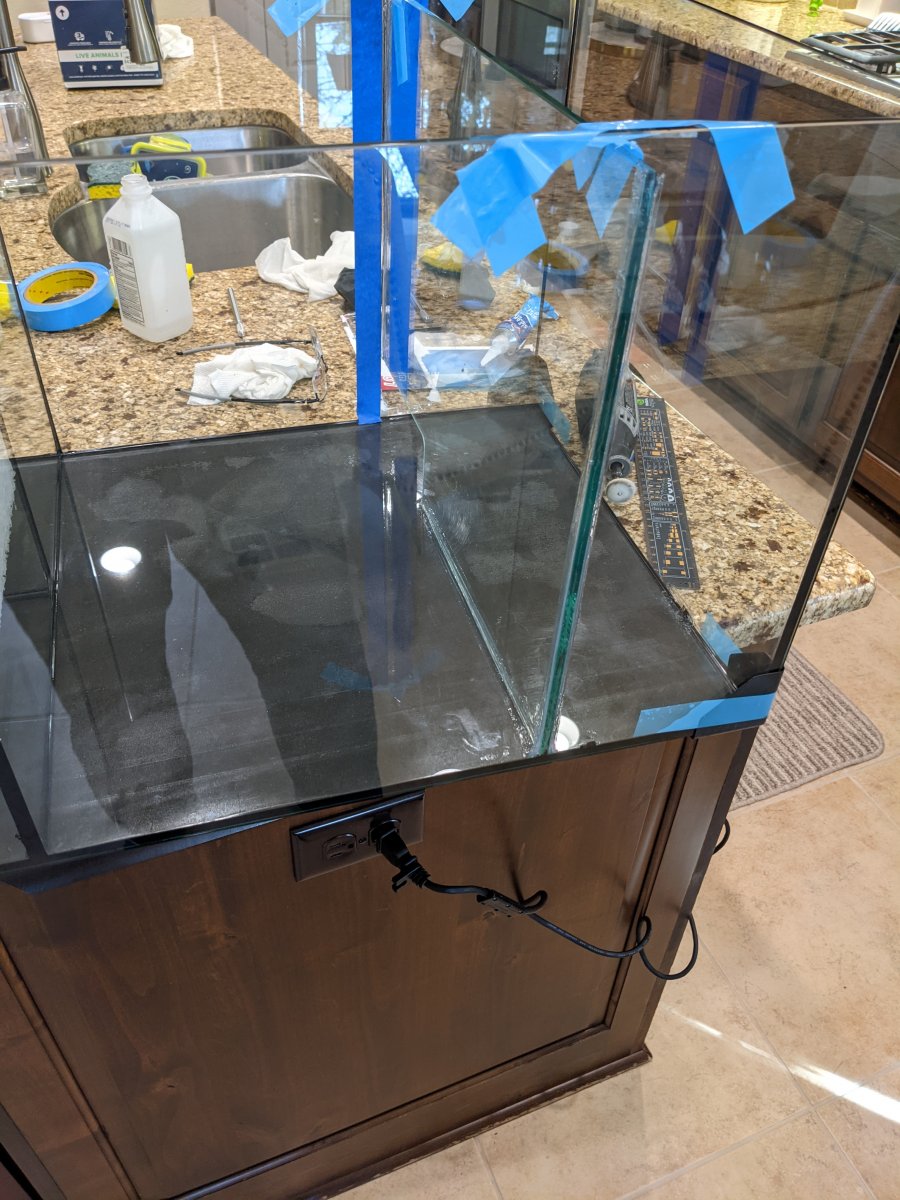 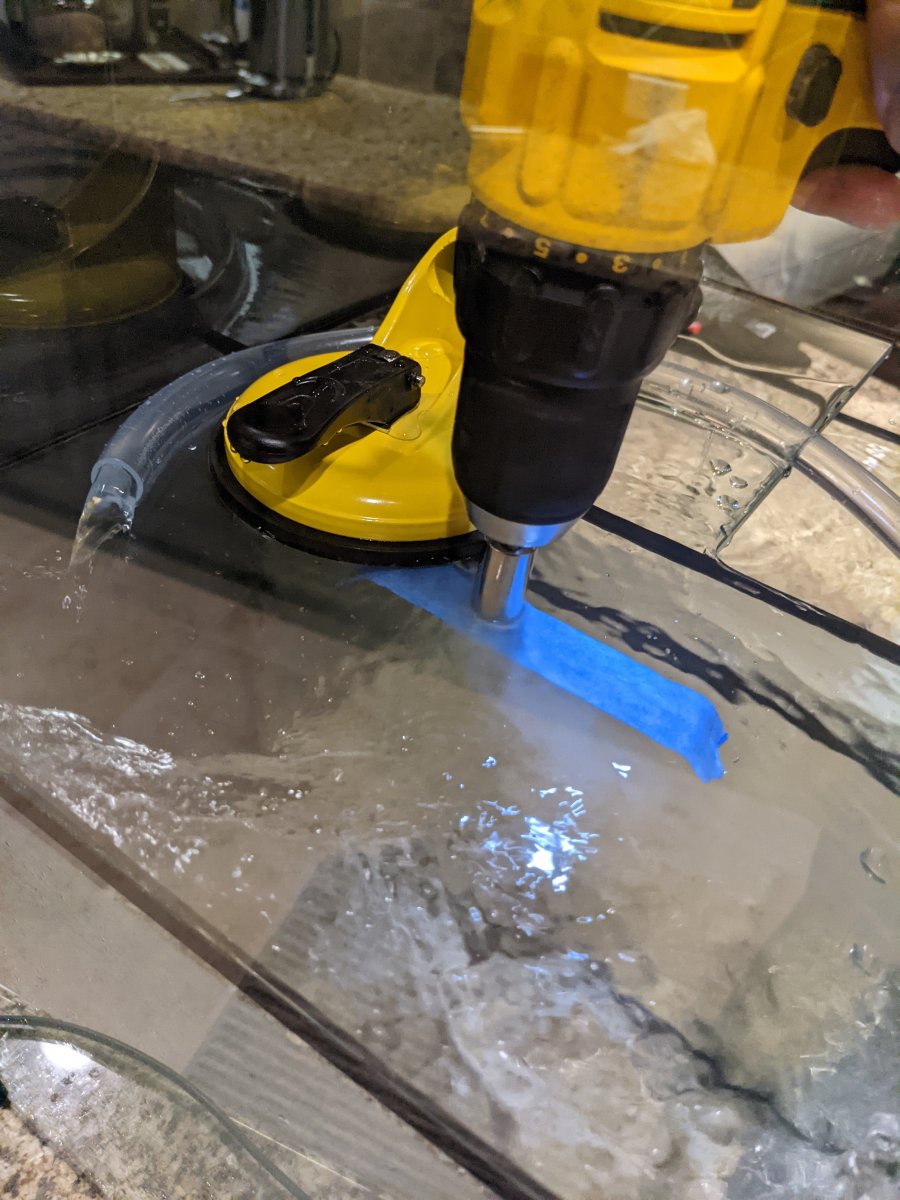 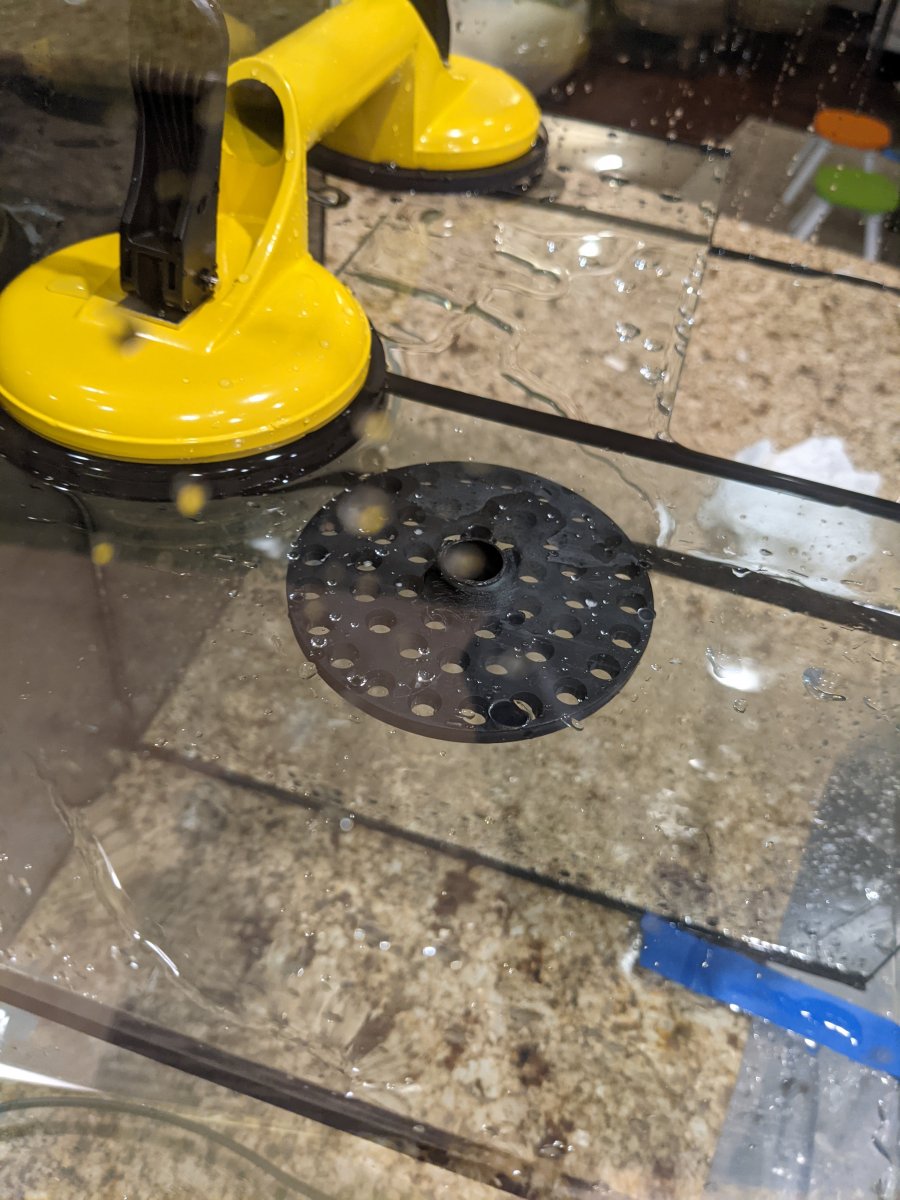 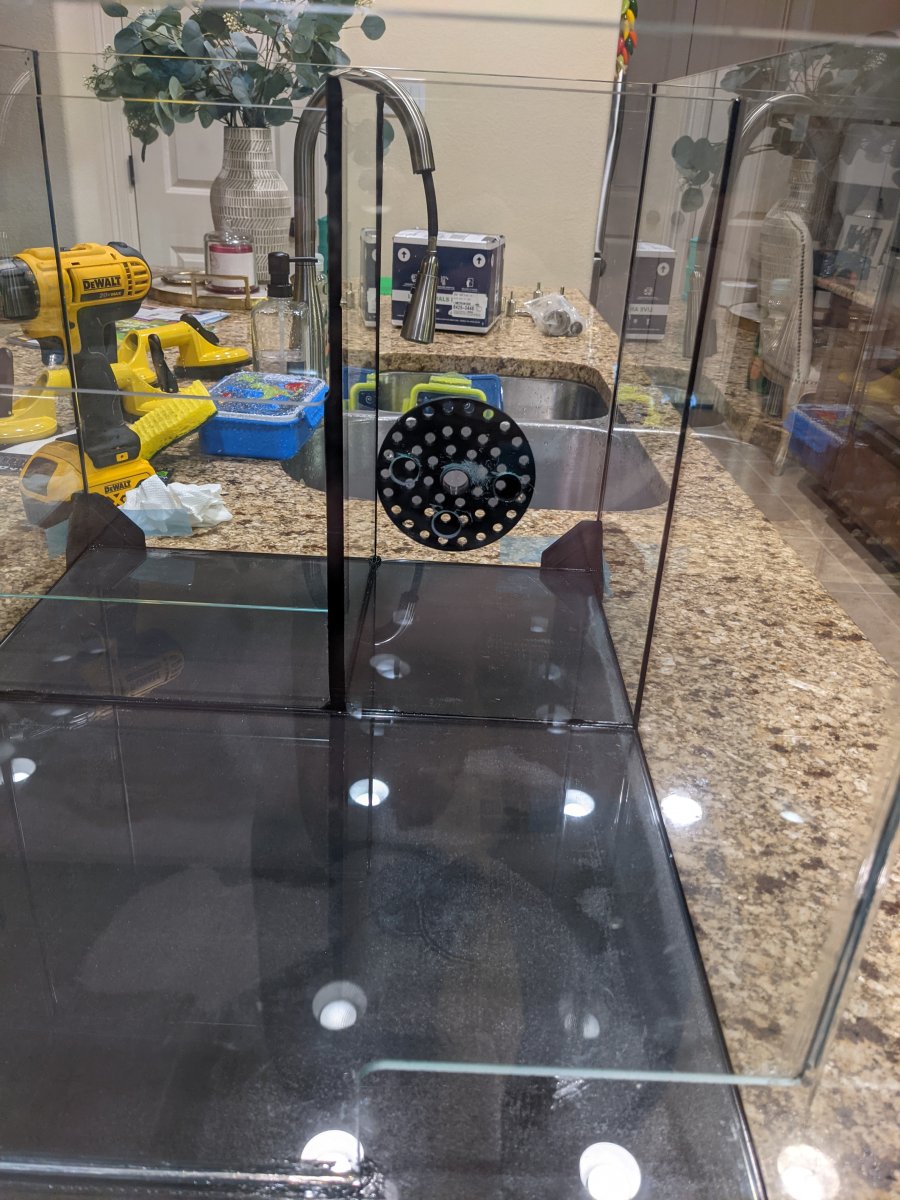 Good work on the sump! Looks like you’ve done that before.
OP
T

Nah, only in saltwater aquarium hobby for a year. First tank was a 24-gallon AIO. So, first time I have ever had a sump and the sump is bigger than my last tank.

techytechguy said:
Nah, only in saltwater aquarium hobby for a year. First tank was a 24-gallon AIO. So, first time I have ever had a sump and the sump is bigger than my last tank.
Click to expand...

Wish i did this before I filled it with water.
OP
T

Everything is in the tank now. Transferred all the fish and rock from the old tank to the new tank. Just threw down the rocks in there for now because I am going on vacation for three weeks and don't have time to build a scape now. I will do it when I come back. Everything is fine except the problem I am having with overflow not being silent and the fluctuating water level in there. I created a separate thread about it if anyone has ideas, please share.

There wasn't much of a cycle since I moved some rock from the old tank and dosed Dr. Tim's and Microbacter7. Threw a ammonia alert badge from seachem in there just in case but never even tested the water. C

I haven't plumbed the filter roller yet. Will do once I get the overflow silent.

Using Eheim heaters along with an inkbird controller. 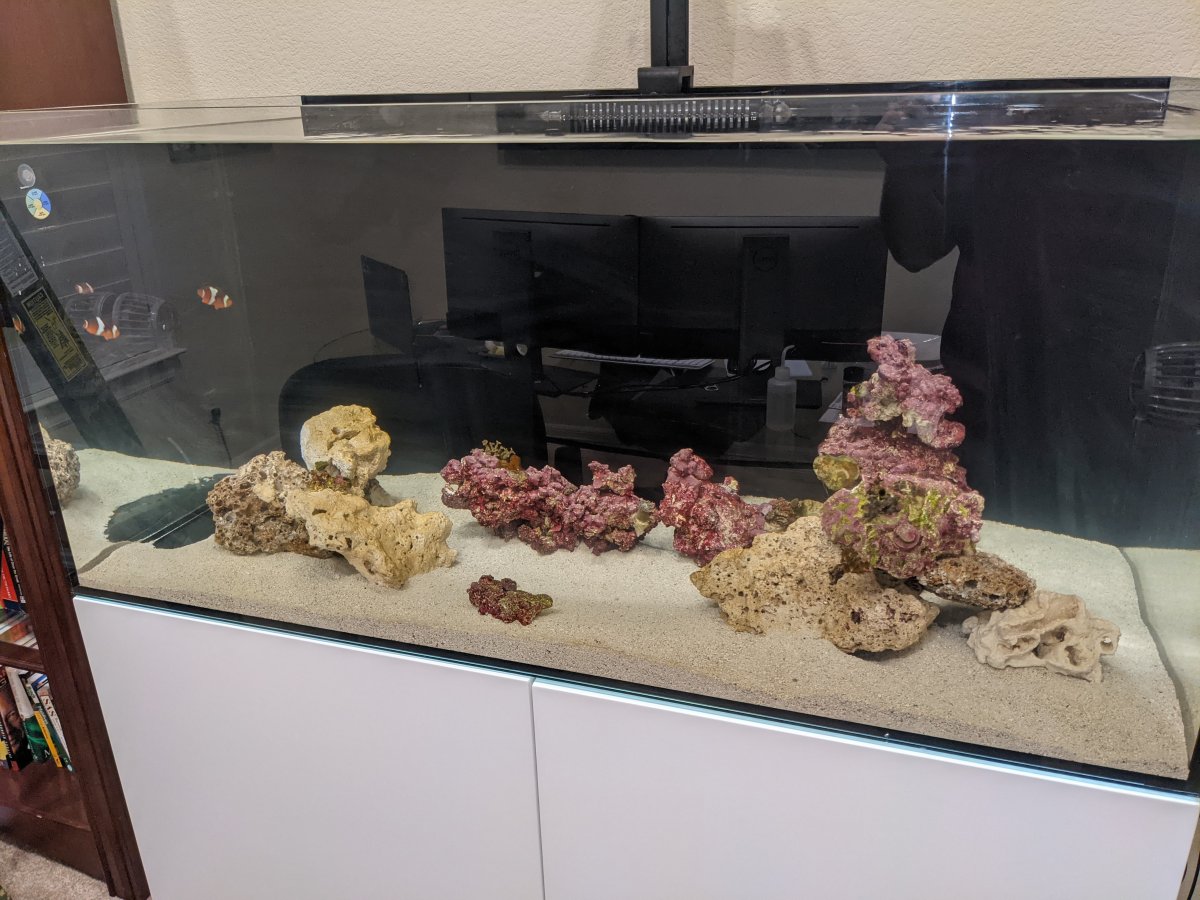 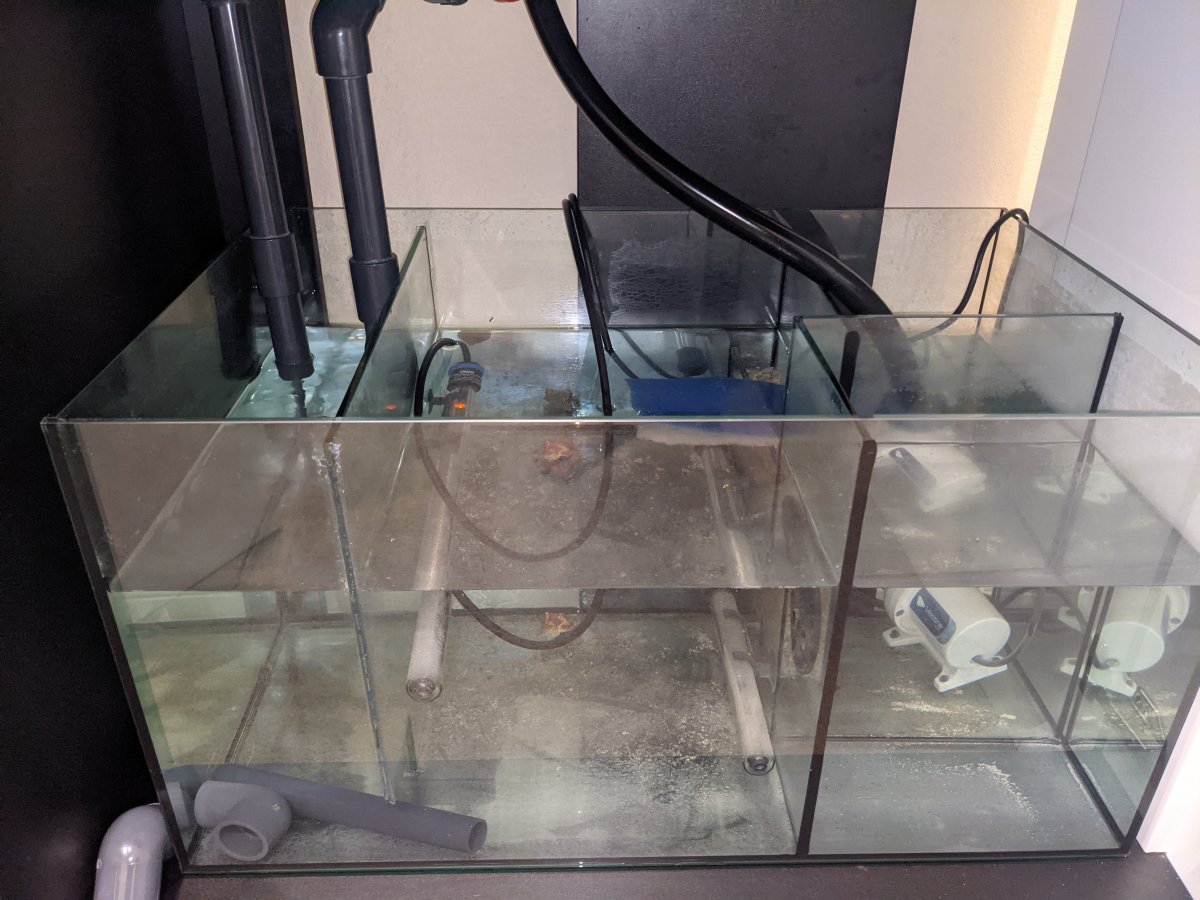 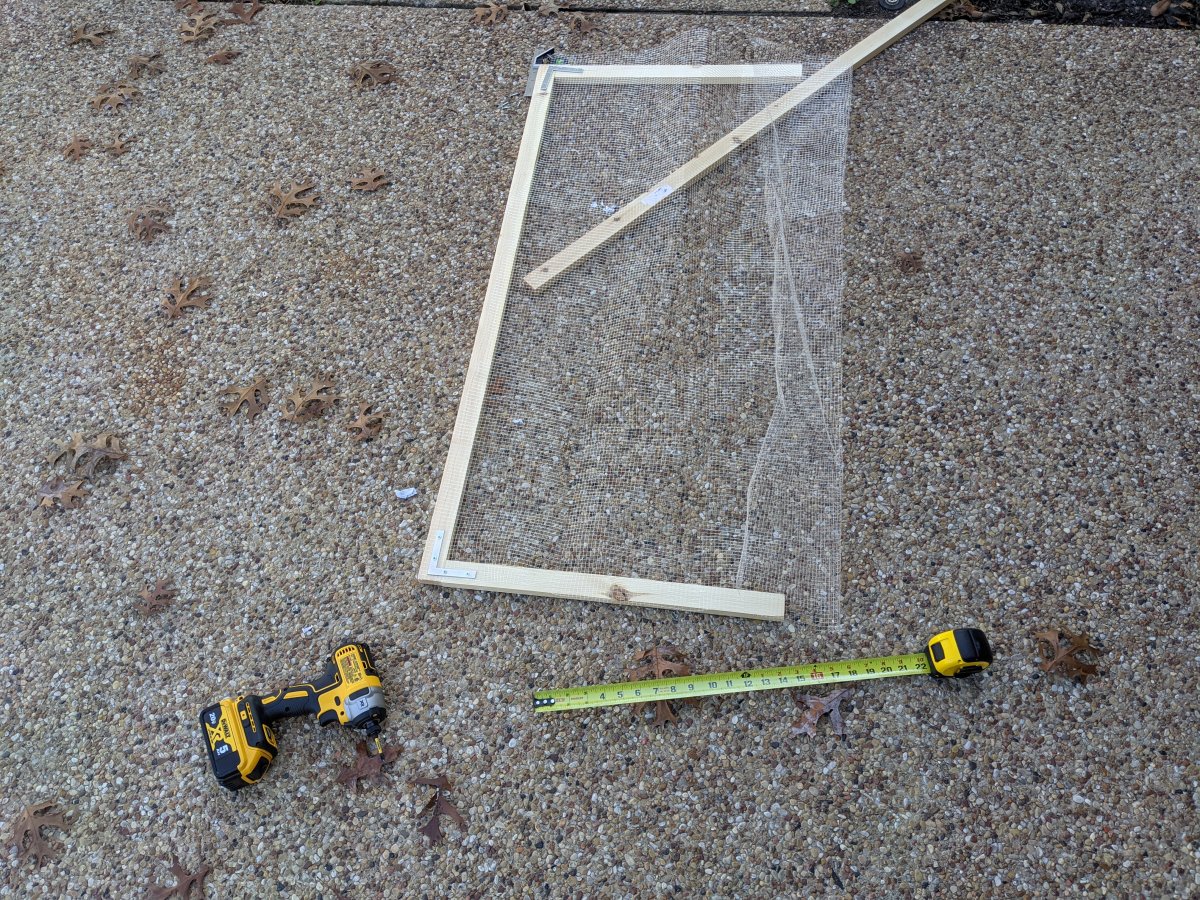 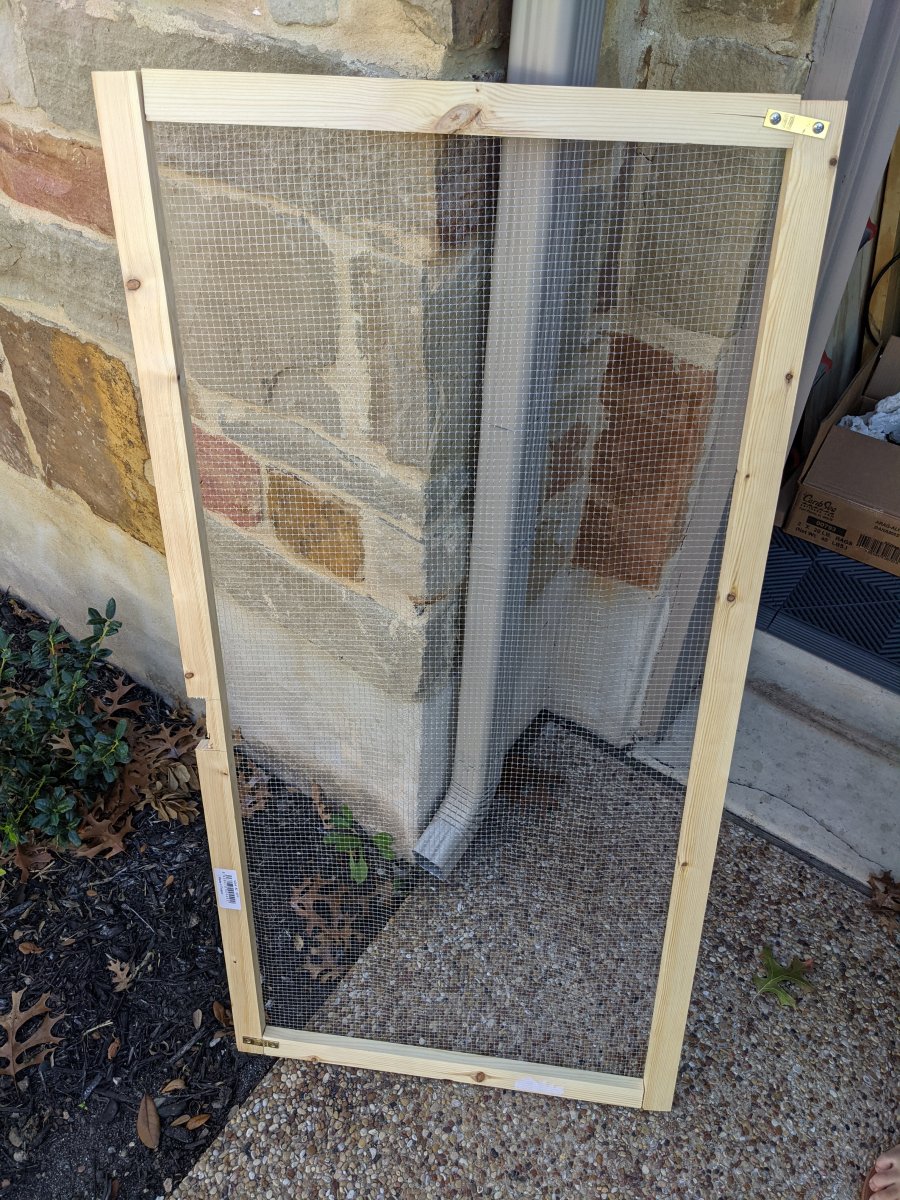 Techy, how is the modified waterbox sump working for you? I’m debating doing the same for the same reason (ClariSea and frag section in the ATO overflow), but wasn’t sure how it impacted water levels and flows, etc. Do you have any updates?
OP
T

it is going quite well. Two weeks after I setup the tank, I went on a 3 week vacation. Just got back last week and things are running smoothly.


The Clairsea roller is working well. This much got used in about 4 weeks. The skimmer is also producing dark skimmate as you can see.

The only thing I have not done is to start the refugium with chaeto (i.e. in the freshwater reservoir that I drilled). I will probably do that in the next few weeks.

Here is a picture of the sump 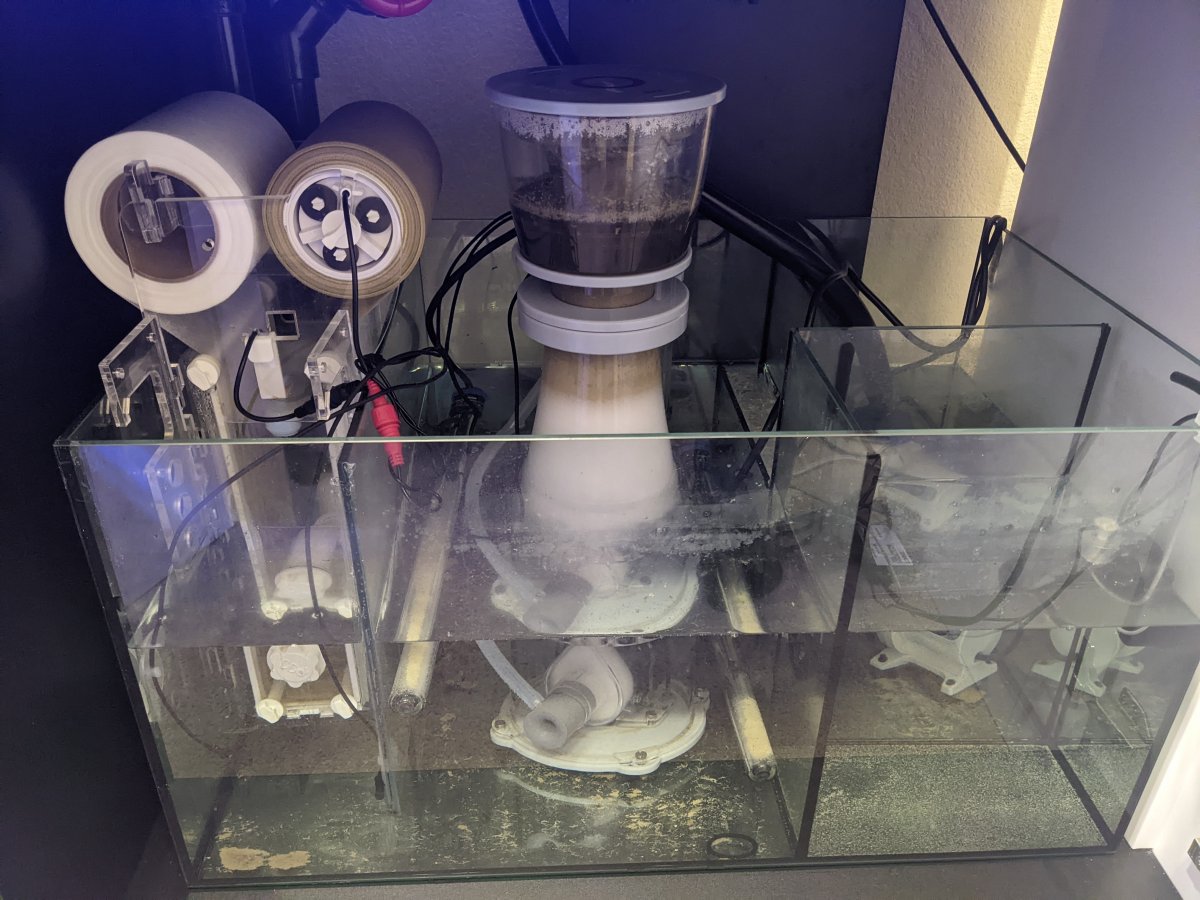