It’s been a while since I’ve updated my build thread.

The tank now has life! Over the last 5 weeks I’ve added 2 clownfish, a Midas Blenny, a Helfrichi Firesfish and a juvenile Multicolor Angelfish. 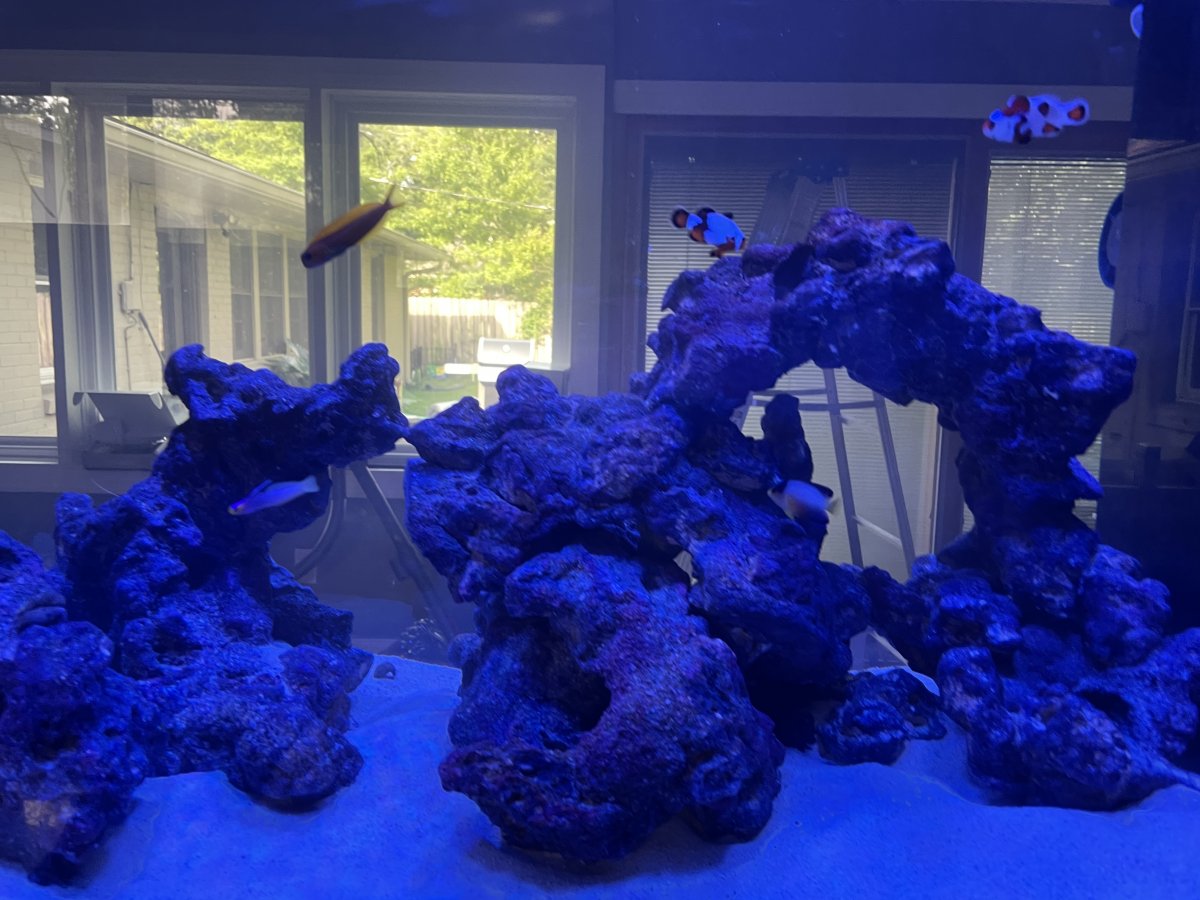 After several weeks up and running I’m starting to get some brown algae covering the rocks, sand and glass. I have a nitrate and phosphorous Hanna colorimetric tester coming in the mail this week so I’ll have a better idea of where my nutrients are in a couple days. 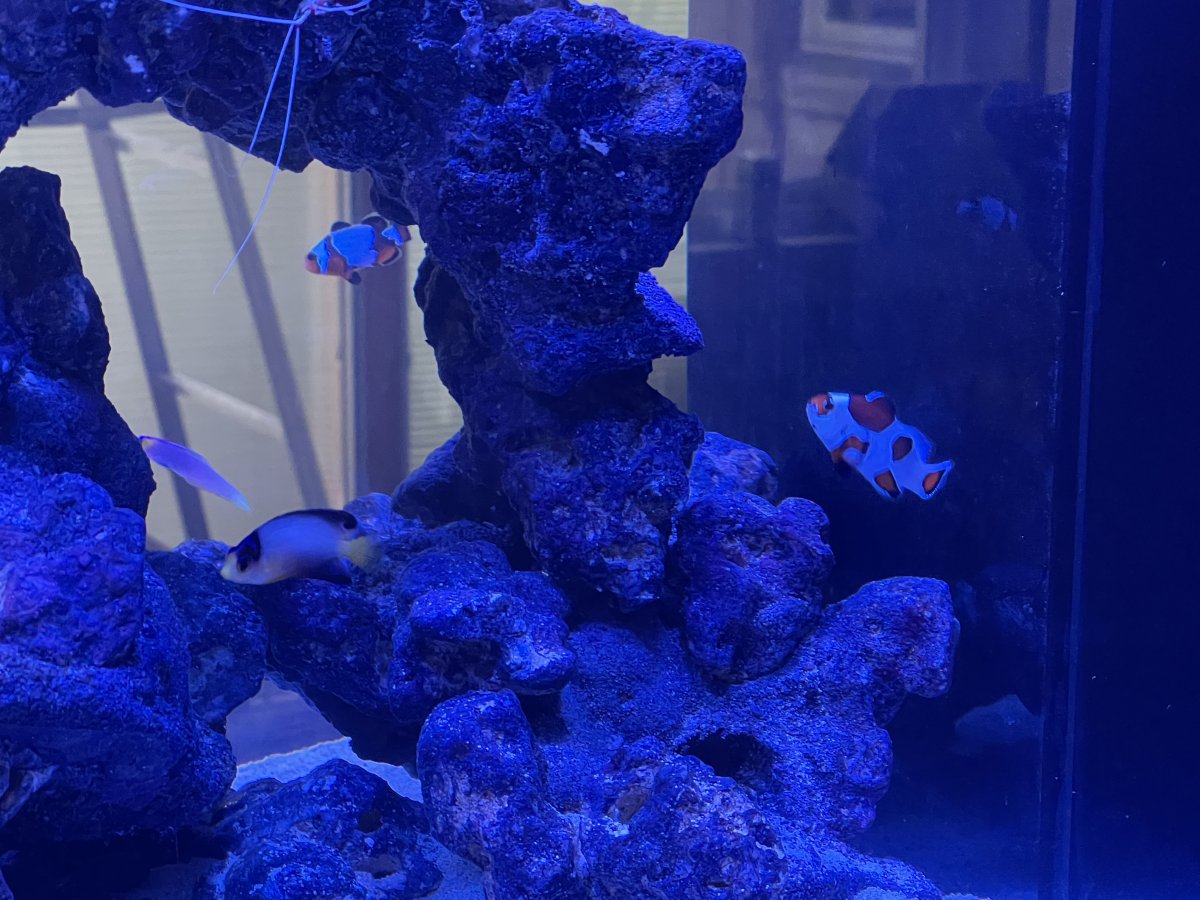 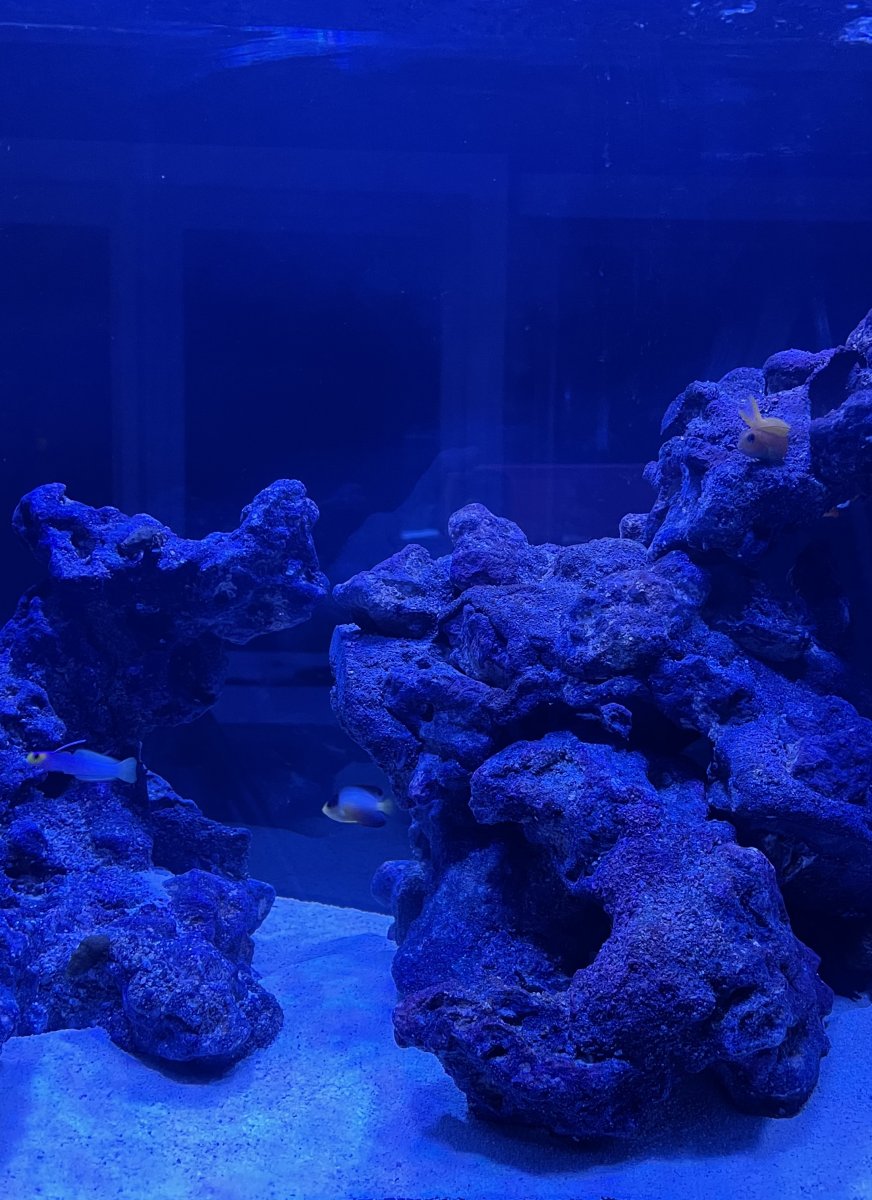 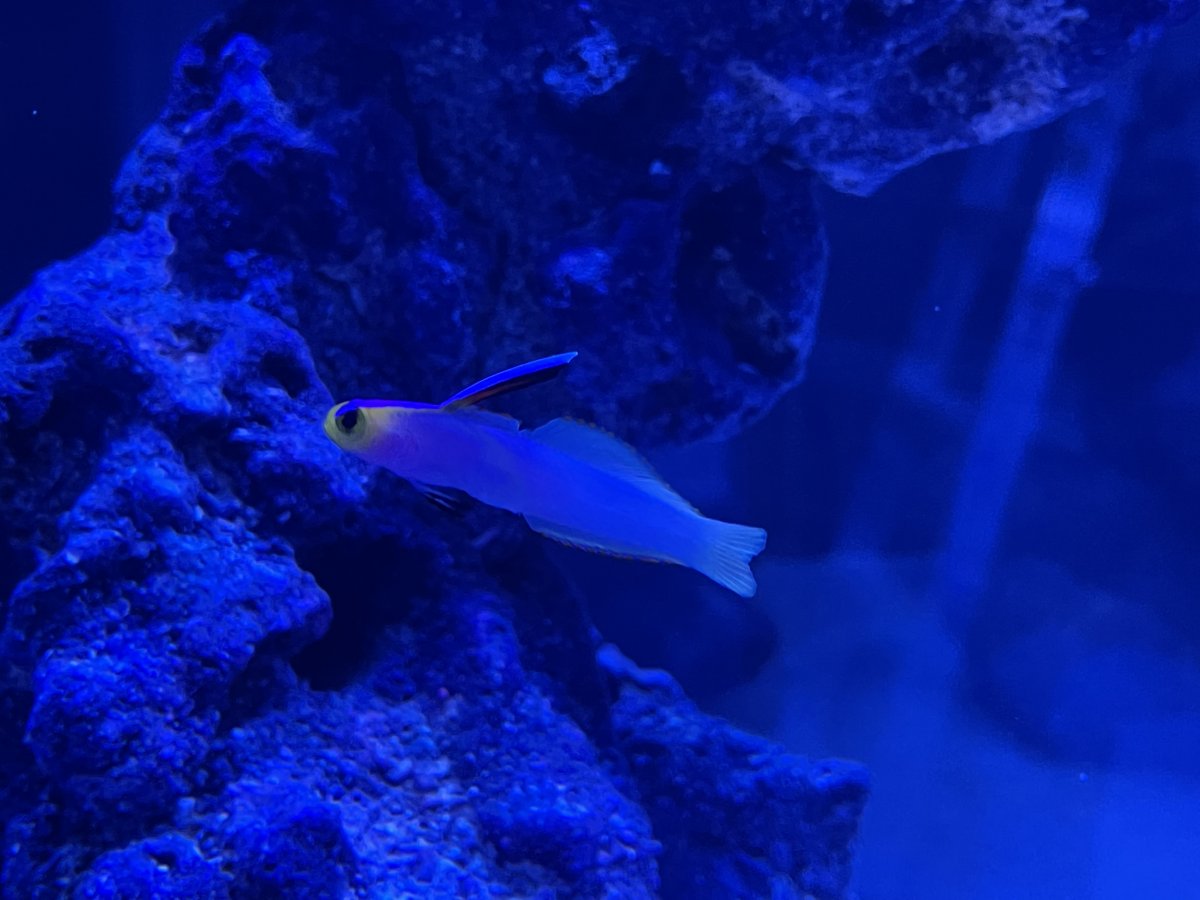 Waiting on my Hanna Phosphorous ULR colorimeter to be delivered, but my recent test results from Sunday on my Hanna Alkalinity colorimeter was 7.5 dKh and my Hanna Calcium checker result was 425
OP

So far things in the tank seem to be doing well. Had a mild dinoflagellates getting on the rock around day 28 which lasted for about 10 days. Reduced lighting and 20% water changes seemed to have gotten rid of all but a bit around the sand.

Fish all seem to be doing well and seem to be getting fat/thick. Feeding twice daily typically with Spectrum new life pellets and Rod’s food. The only real issue I seem to be having is a bit of bullying by the Midas Blenny. I’ve noticed a few fin tears in the clowns and have seen him “engaging them” several times; I plan to observe closely and if he gets too aggressive I’ll take him back to my LFS or rehome him with another hobbiest.

Added my first coral last Saturday, a dragon soul favia, then a torch this past Tuesday. 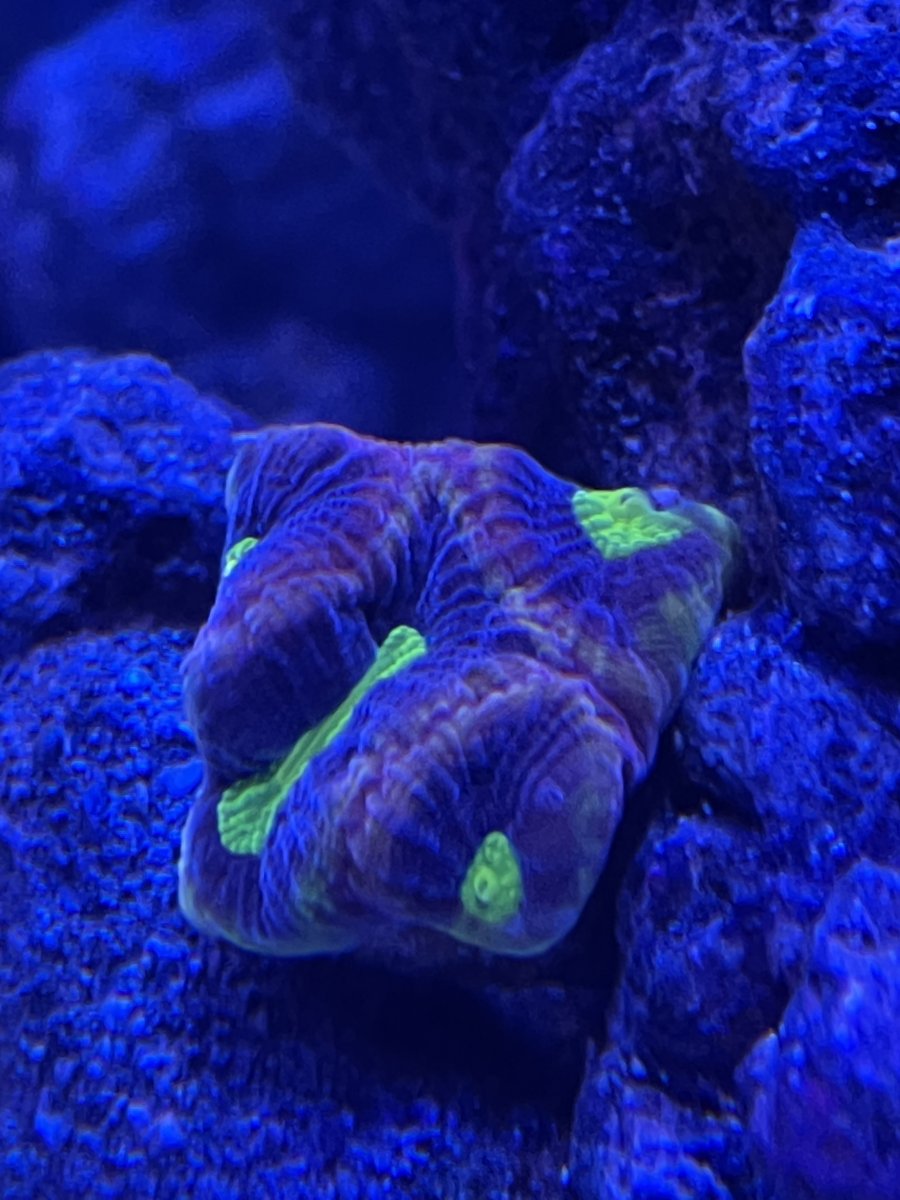 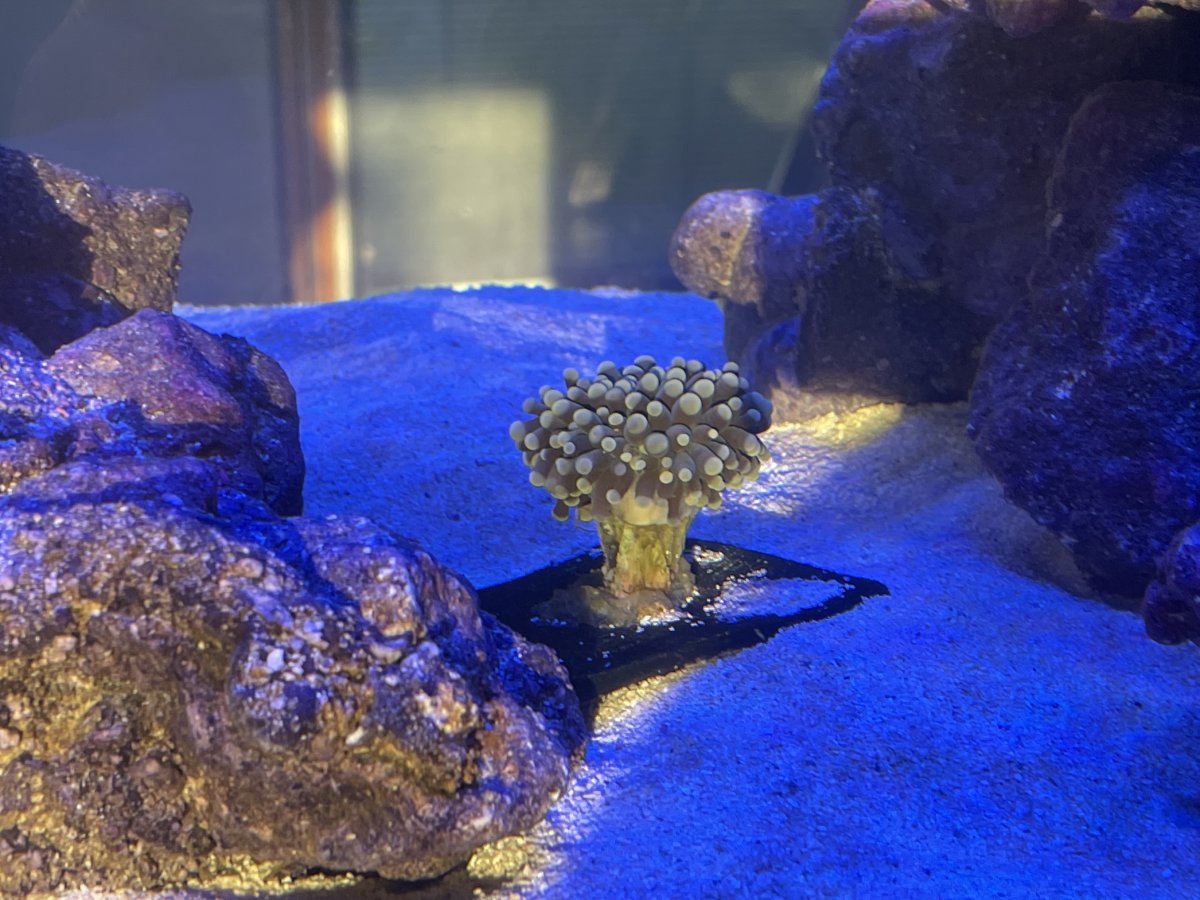 The torch is a really interesting teal color with gold tips; I can’t get a photo that comes close to capturing the coloration.

I received an order from IPSF on Wednesday for the Live Sand Activator Plus, Reef Tune Up and Mini Stars. I’m digging the microhermits, they’re going wild, super active. I’m not sure which type of snails it is, but I’ve had about 7 commit suicide climbing out of the tank overnight. I seemed to have lost several others of a similar type either in transport or for another reason. I caught Clovis the cleaner shrimp snacking on one just earlier. 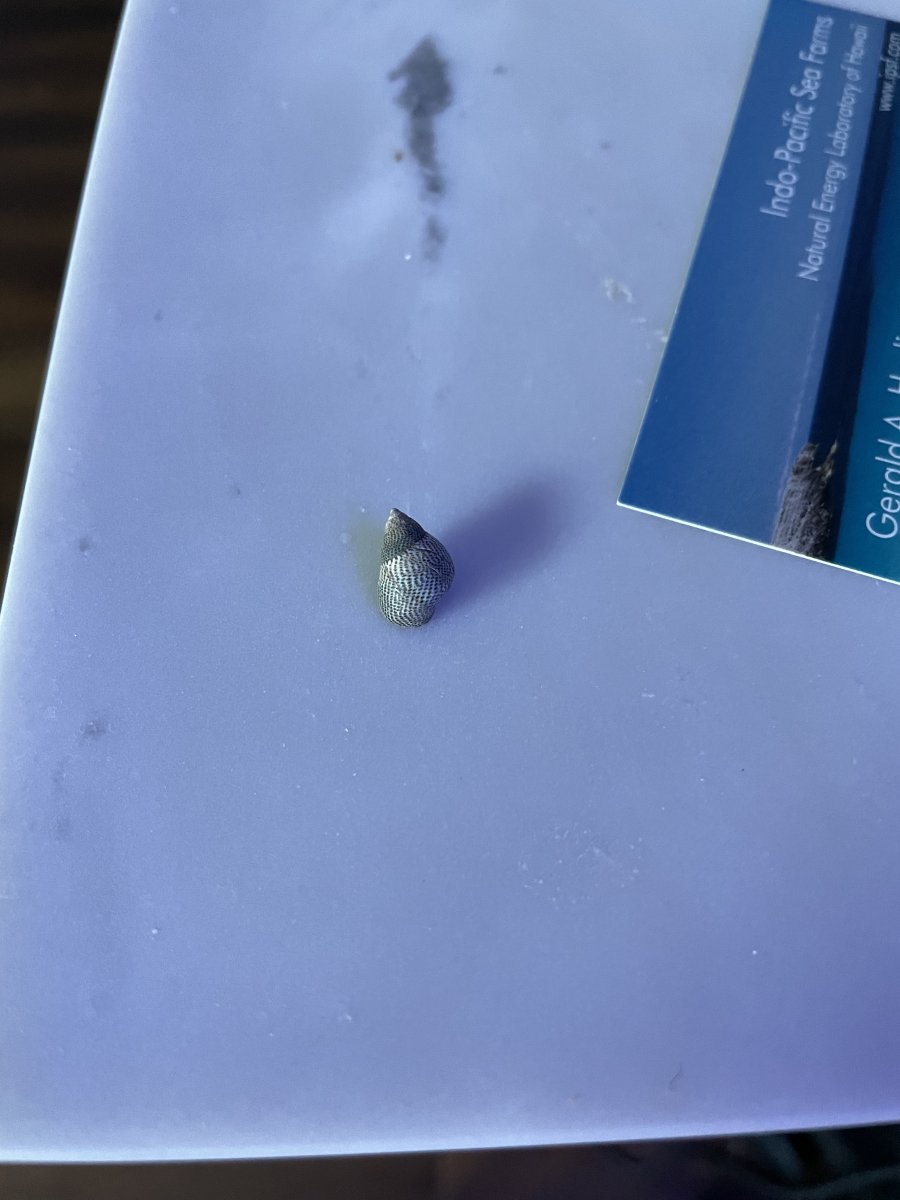 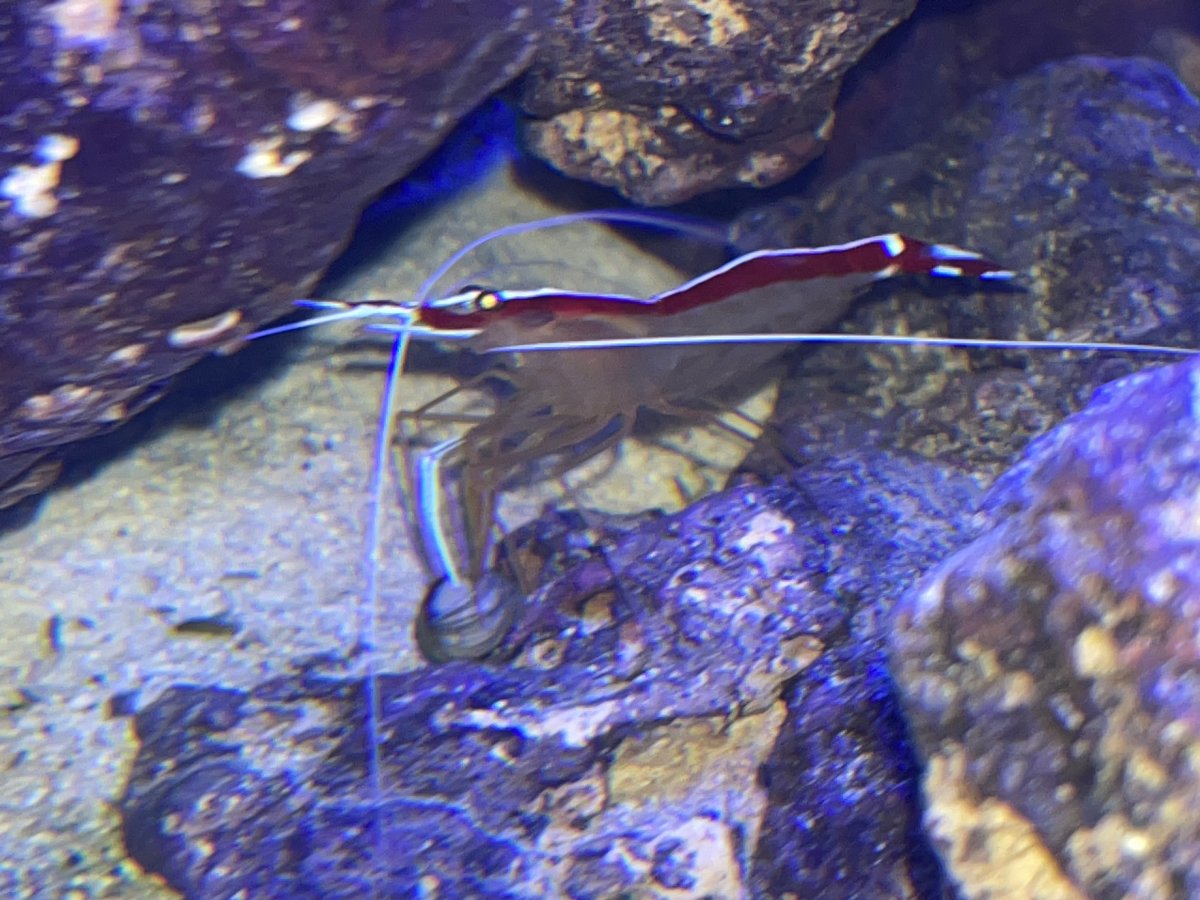 I haven’t seen the mini stars or bristle worms after adding them to the system but I probably wouldn’t have seen them yet anyway. The IPSF order included a bonus duo of a neon green toadstool with two heads and a mushroom at the base, and a tiger cowrie 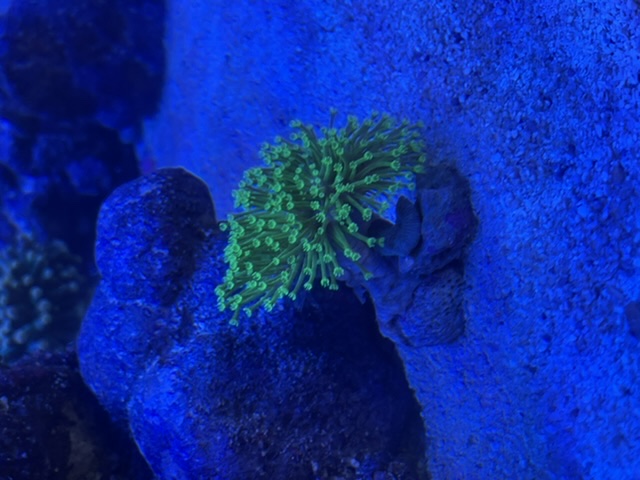 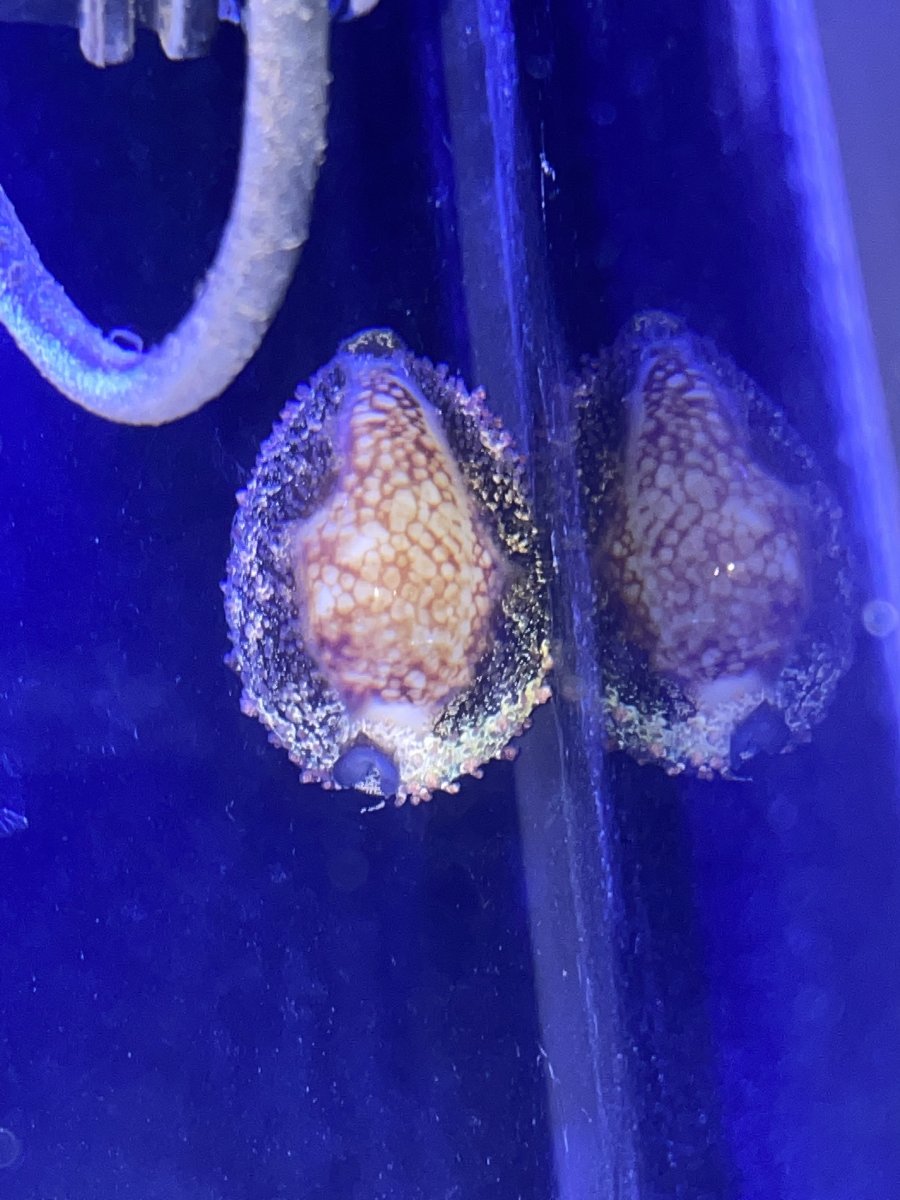 The gang seems to all be doing well. I managed to capture them (fish) all in one shot with a nice spotlight from the afternoon sun.

From left to right:
Daphne the cleaner shrimp (honorable mention)
Prometheus the helfrichi firefish
Artemis the semi-storm clown
Helios the midas blenny
Achilles the multicolor angelfish and
Actaeon the snowflake (I think) clownfish 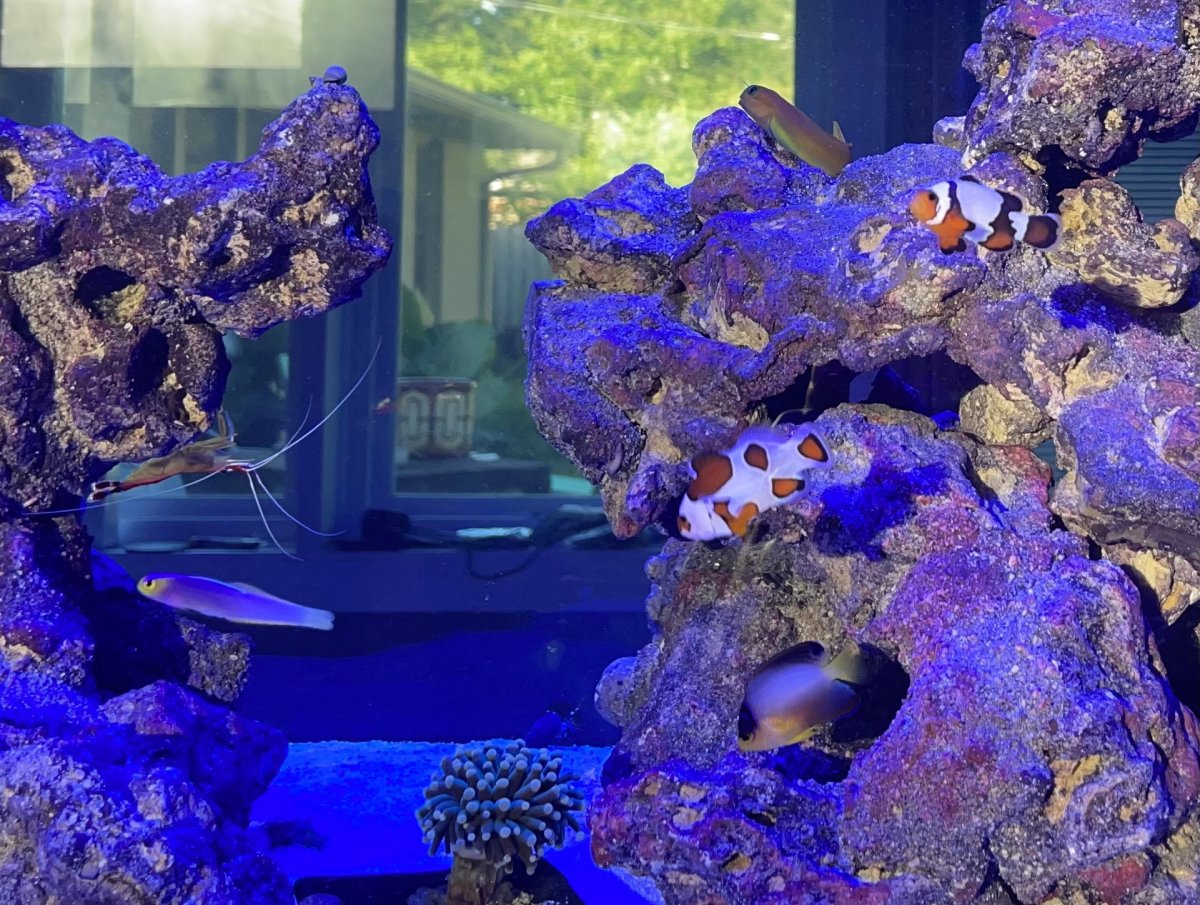 I lost a snail the other day and my tank seemed to start developing a bacteria bloom. My LSF sold me a UV sterilizer and the tank has never looked better.

I also added a small purple urchin I found. 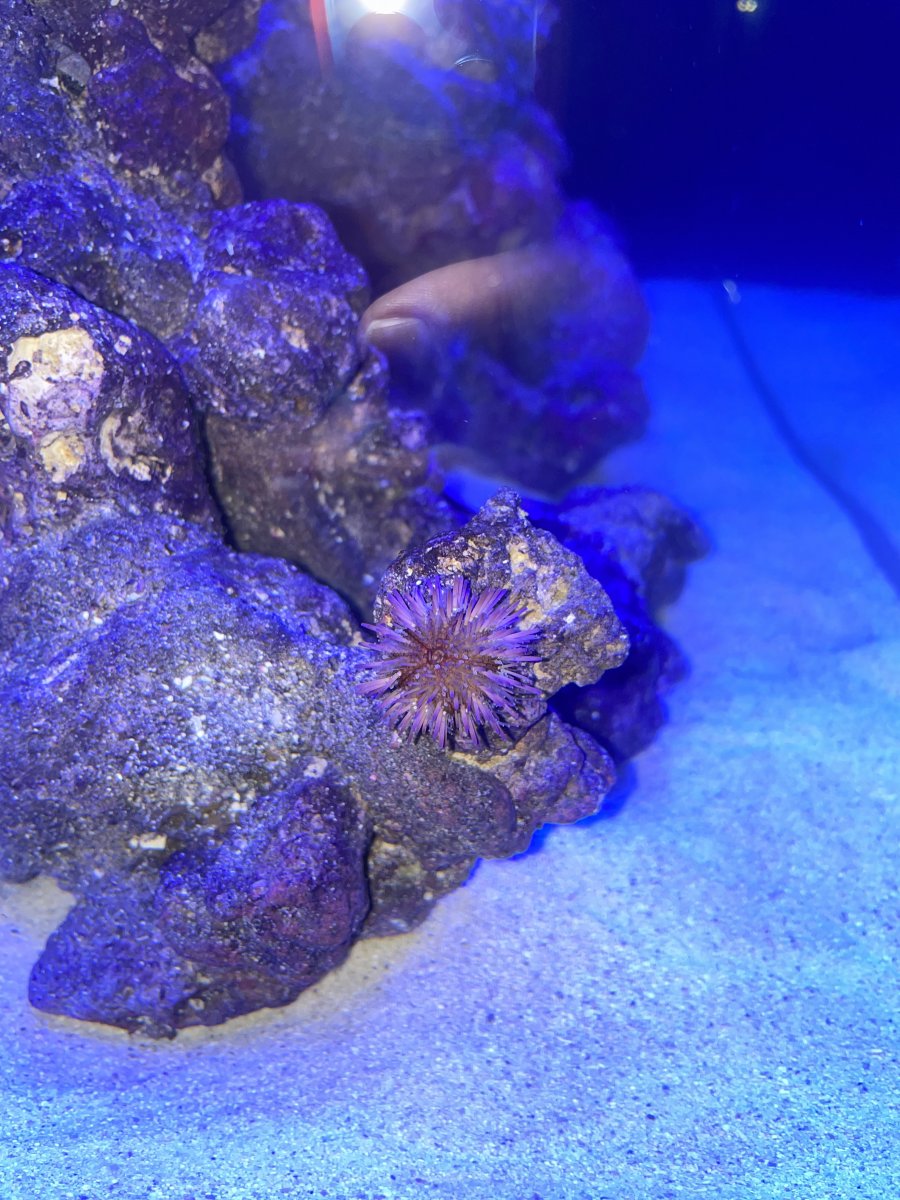 Daphne seems to have a clutch of eggs around the abdomen, I’m not sure about this yet though.

Artemis also is acting peculiar. She seems to be brushing against the back glass and picking at it with her mouth. I’m wondering is she is about to spawn. I’ve never actually had a clownfish spawn in my tank before so we’ll see.
Last edited: Jun 28, 2021