So I have been in the hobby for almost 2 years now, decided to do it during quarantine because I had wanted a saltwater tank ever since I was a little kid and saw a mandarin dragonett at our LFS. I made the mistake that lots of new reefers make and started with a 20 gallon tank, of course it had the problems that small tanks and beginning reefers have with quickly fluctuating levels and inexperience on how to fix them. I finally got that tank stable and decided I needed another one… so I got a 5 gallon for by the tv. That one went a little better but due to a power outage in the middle of the night, and an unseasonably warm (115f, 125f in my house) day when I wasn’t home there were 2 extinction events as I didn’t have enough fans or working air conditioning. After I got the 5 gallon established I decided as most reefers do that I needed another tank so I found a 20 long and set that up as well. It was around this time that my wife got irritated and said “why don’t we just get one big tank and put all of these into there” Well that was all the motivation I needed to scour Craigslist and find my current 100 gallon tank. I drove to San Diego and bought it and it’s homemade stand for 150$ and brought it home with my head full of big dreams and plans. It was at this point that I realized the stand was ugly and needed to be refinished, so I spent the next week sanding, staining and refinishing it so that it would match the rest of the furniture in the house. I got the tank inside and then got to do the fun part of aquascaping, then spent a day filling the tank, the local LFS was awesome and let me borrow a bunch of containers to fill. (Yes I buy my saltwater but it’s still cheaper than installing a ro system and worrying about messing it all up). I spent the day hauling 5gallon jugs and excitedly filling my tank. Got filtration and heaters and lights hooked up and went to bed tired but happy. Around 2 in the morning I heard what I registered as rain, I sleepily rolled over and shut the window so my wife wouldn’t get wet as we sleep beneath the window… about five min later my niece who lives with us knocked on my door and in a panicky voice said “ummmm I think the fish tank is exploding!” I jumped out of bed and sure enough one of the seals had popped and I had about 30 gallons of saltwater in my living room carpet and the rest pouring out. The family quickly formed a bucket brigade and we managed to contain the other 70 gallons. Luckily there were no fish or corals in the tank yet so no real losses. The next day I emptied the tank again, took it back onto the porch, and spent a day cleaning it out and cleaning the carpet. The next day was spent re sealing (my seals look like **** but they are strong!) and fabricating some braces on the top out of aluminum. The next 4 days were pressure testing (on the porch this time) and then I cautiously brought the tank back into the house. I rescaped (much better this time honestly) and refilled. Used dr Tim’s nitrifying bacteria and the filters from my other tanks to get a fast cycle going and about 9 days later I was able to add cleanup crew and a couple of clowns. The 100 gallon has been up and running since March of 2021 and going strong . I somehow wound up with 2 more 5 gallon pico tanks and that 20 long was going to be a quarantine tank… but it turned into a macroalgea tank instead… strange how that worked .
Here’s a couple photos of my 100 gallon before fish. I have tons more on my Instagram account found here 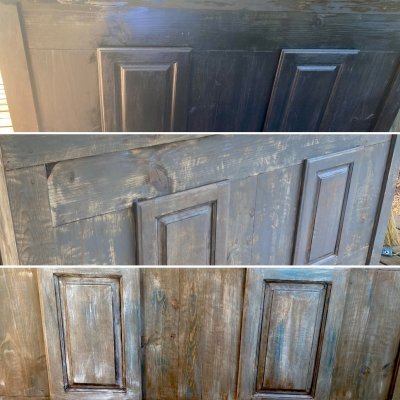 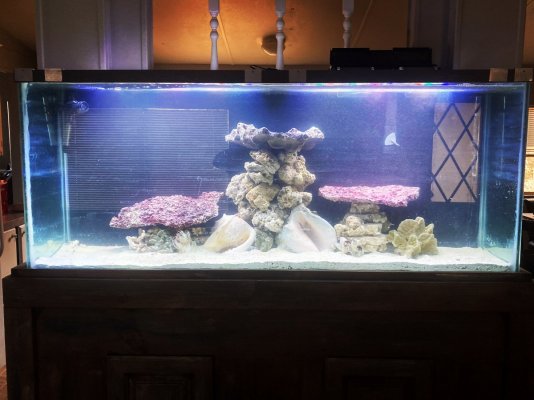 whaleysreef said:
Here’s a couple photos of my 100 gallon before fish. I have tons more on my Instagram account found here

What an absolutely majestic aquascape! What rocks and shells did you use and where did you source them from?
OP

Thanks! I used livestock mostly from my local LFS, I also used some dry rock from “stackx” The shells were actually from my parents, my mom had them in her garden and I mentioned I was looking for stuff for my aquarium. She went into her rose garden and pulled these two huge chonch shells out . So I cleaned them out and stuck them in

whaleysreef said:
Thanks! I used livestock mostly from my local LFS, I also used some dry rock from “stackx” The shells were actually from my parents, my mom had them in her garden and I mentioned I was looking for stuff for my aquarium. She went into her rose garden and pulled these two huge chonch shells out . So I cleaned them out and stuck them in
Click to expand...

The shells will become detritus traps. If you want to keep them in there, I would break several large holes going all the way through them so that water can flow through, if you don’t they’ll become nitrate factories.
OP

Thanks for the tip!