Miami Reef said:
“The juvenile is black with circular white and blue stripes starting at the tail. Although sought after for its colors, in captivity, the adult coloration may not be as striking or brilliant. The changing angelfish will vary in coloration and pattern as it transforms from juvenile to the adult coloration.”

No personal experience but I have seen pictures of some stunning adults on the internet that started as juvinals. I have seen that exact same quote multiple times. It seems in this hobby that 1 person puts something on the internet, then it is copied and pasted all over the place. I wouldn't worry about it. The joy of watching this fish transition would probably be worth the tiny amount of color loss, if there actually is any color loss at all. See below link to answer your question.

The emperor angelfish (Pomacanthus imperator) is the most well-known angel fish in the aquarium industry, With striking colors, bold body, combined with personality and an attitude, It is not only me but also many other hobbyist consider it the most beautiful fish. It is readily available and...

Miami Reef said:
Let’s hear them! Looking to add the most voted on in this thread.
Click to expand...

Mine is the Emperor. Shown here in my 350 gal tank

Well, guess who purchased a baby emperor today! It was the most voted on here and I’ve definitely had my eyes on one for a long while!
D

ApoIsland said:
That's a good question. The only full adult ones I have seen in home aquariums were purchased after transition. I do have a buddy raising a juvenile now, so we will get his answer in a couple years I guess...
Click to expand...

DK450reef said:
I bought mine the size of a quarter and he went full adult no problem
Click to expand...

How long did yours take to transfer? My new guy is the same size as yours. What’s his favorite food?

Brymac1 said:
My favorite is the conspic. But I doubt I’ll ever be able to afford one lol 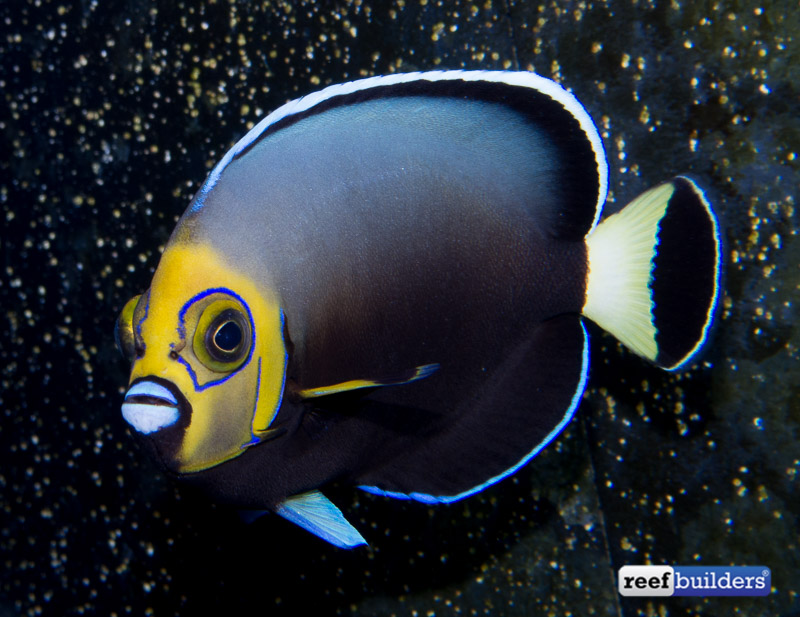 I had one long time ago. He came infected with gill flukes luckily my local store agreed to split the cost with me
D

DK450reef said:
I bought mine the size of a quarter and he went full adult no problem
Click to expand...

Miami Reef said:
How long did yours take to transfer? My new guy is the same size as yours. What’s his favorite food?
Click to expand...

He took about 8 months to transfer favorite food is anything! I rotate brine, mysis, chopped squid, lots of nori Only corals he has munched were LPS and he like Zoanthids
S

Zionas said:
Pairs are nice. How big of a tank for your Blue Rings?
Click to expand...

About 650 gallons with a ton of hiding places.
A few weeks ago I added a pair of Rainford gobies and haven't seen them. Still hoping they show up some day. I love those little guys.
S

Brymac1 said:
I almost forgot about the Chaetodontoplus caeroleopunctatus (blue spot angel). I wish they were seen more in the hobby. I think their whole genus is underrated. 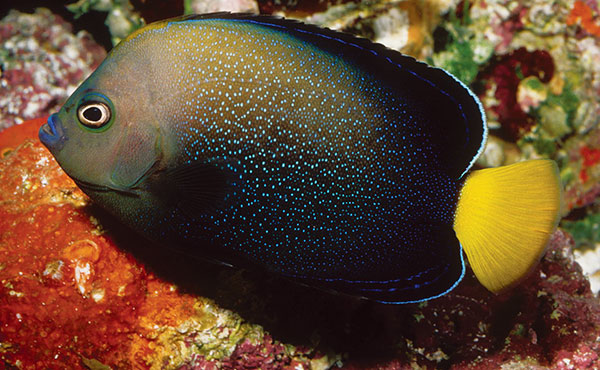 Oh my, that fish is stunning!

DK450reef said:
He took about 8 months to transfer favorite food is anything! I rotate brine, mysis, chopped squid, lots of nori Only corals he has munched were LPS and he like Zoanthids
Click to expand...

You are correct lol. It’s been 2 hours and the emperor (and my new Flagfin angel) are both eating! The emperor came with some ich on its tail, which is no problem as it’s currently in copper.

Love the angels. The chairs need a little work.

Zionas said:
I think it’s because Tangs are generally seen as a “reef safe” fish whereas angels are not, and not everyone is willing to take any risks with corals (I’m too big of a fish buff, I want a reef but it’s fish over corals for me), so angels naturally get the “short end of the stick” when it comes to being preferred by people. I think it’s almost a heresy that angels aren’t being given equal if not more attention than Tangs. They’re more mine idea of a “centerpiece” fish (not sure how much I like that term because for me I’ve shifted to building a tank more around social behaviors over cramming as many individual specimens as possible) than a Tang or a Wrasse. Just my opinion of course.

So I think it’s mainly because we have a lot of people who, as soon as they see “Reef Safe With Caution”, write angels off altogether whereas having a Tang is just…. seen as almost obligatory and equivalent to being in the reefing experience itself. There are Tangs which I do kinda like and wouldn’t mind having (mostly the Zebrasoma, except the Sailfins and the Black Tang or the drab brown Scopas, or the “aberrant” Scopas), but they’re not my first preference and it’s also not entirely true that Tangs and Rabbitfish are “completely” reef safe because they still pick at the micro-organisms that are found in corals.

And other than that, I’m not entirely sure. But IMO a pair or harem of angels is far more interesting than one or multiple Tangs that kind of just, do their thing by swimming around and grazing.

A Bristletooth’s good for algae control, but it’s hard / nearly impossible to find CB ones.

I am on some Asian reefing forums too and there are many members who refuse to even consider a fish that is listed as “Reef Safe With Caution.” So angels, butterflies are out of question for them. But I think angelfish have some of the most beautiful body shapes among all marine fish. Butterflyfish too but the colors of many angelfish beat the colors of the butterflyfish that we can keep alive (which eliminates like 80% of Chaetodontodae).

My least favorite genus of angels has to be Holacanthus. They just don’t do it for me. Chaetodontoplus, Majestic, Regal, Goldflake, Bandit, and Centropyge / Paracentropyge are where it’s at for me. Genicanthus maybe but only in a pair or trio where the sexual dimorphism is clear and the male doesn’t revert.
Click to expand...

I know you said angels arent a reef centerpiece, but I set my reef up in the hopes of having a Bellus angel harem of about 4 to 6 members. Was hoping for all females, but a male became available about a month ago, and he is doing quite well in the new tank.

I was trying to say that angels to me are the best centerpieces. A harem of 4 or 6 sounds awesome! How big is your tank?

Miami Reef said:
You are correct lol. It’s been 2 hours and the emperor (and my new Flagfin angel) are both eating! The emperor came with some ich on its tail, which is no problem as it’s currently in copper.
Click to expand...

I have always wanted an Emperor. Couldnt find one them I got ahold of a queen. Apparently they don‘t mix so I have a queen and no emperor.

Yellow mask angel and Queens... this is the transition photos of mine. 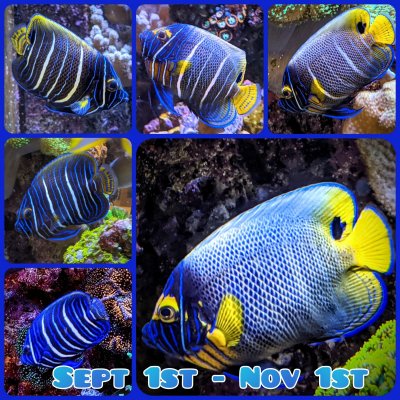 Lionfish hunter said:
I have always wanted an Emperor. Couldnt find one them I got ahold of a queen. Apparently they don‘t mix so I have a queen and no emperor.
Click to expand...

I’ve seen a beautiful 7-8” queen, and it’s streamers were a good 3-4”. If I had a “monster” sized aquarium, I would be getting hold of one in an instant because of my LFS getting these beautiful juveniles. I’ve seen a juvenile H. bermudensis and that’s my 2nd favourite of the Holocanthus genus but my third favourite of the genus is H. clarionensis
H. cillaris 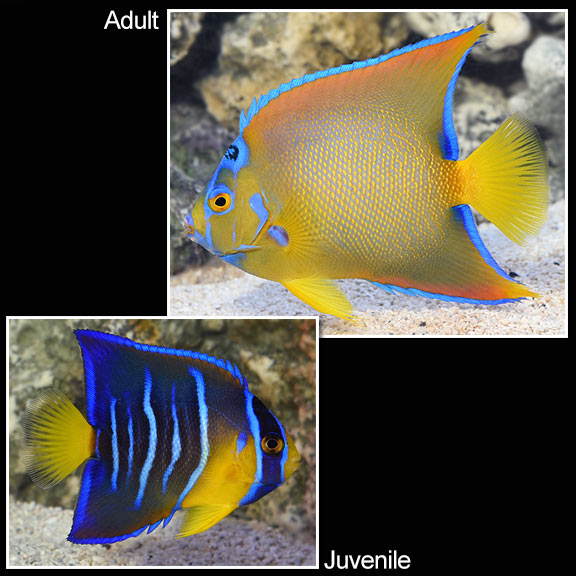 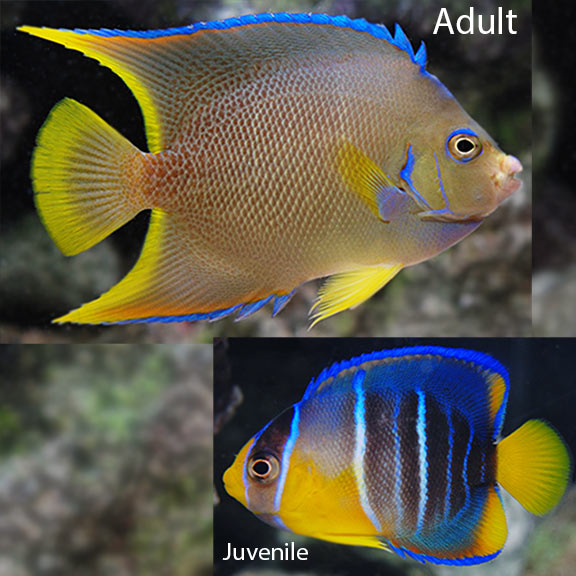 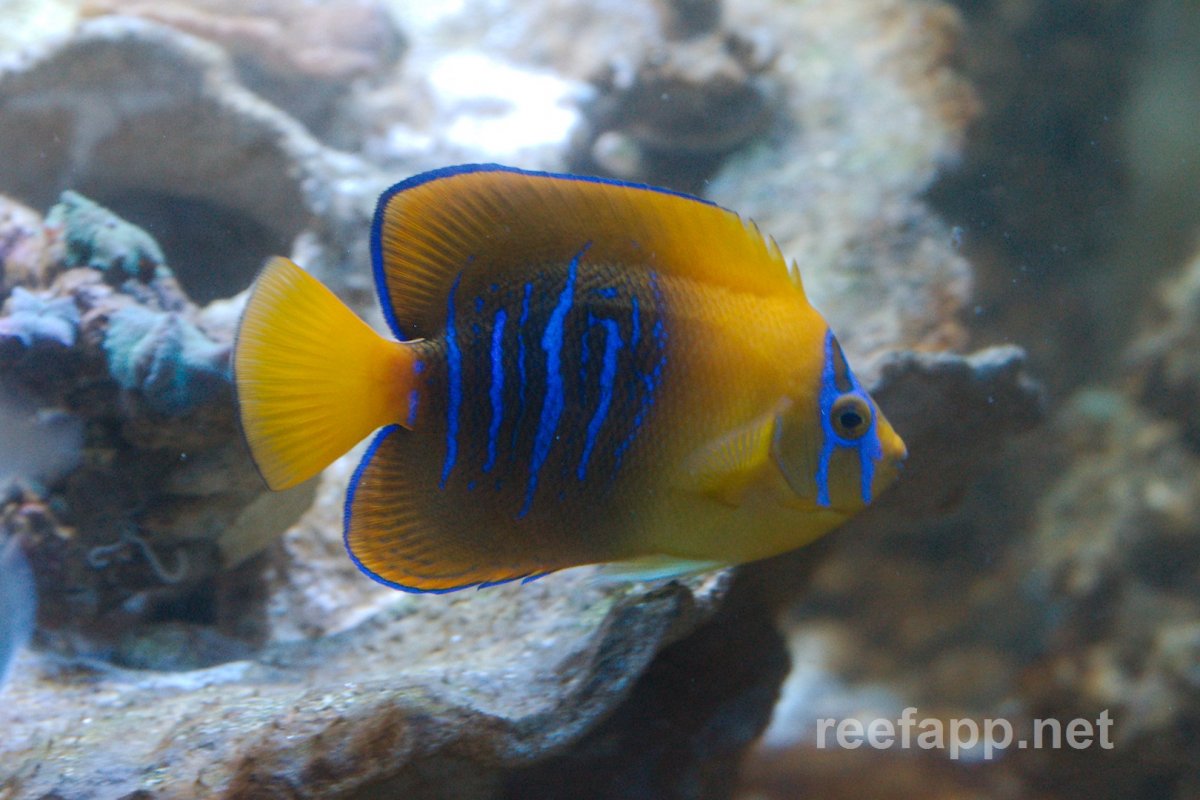 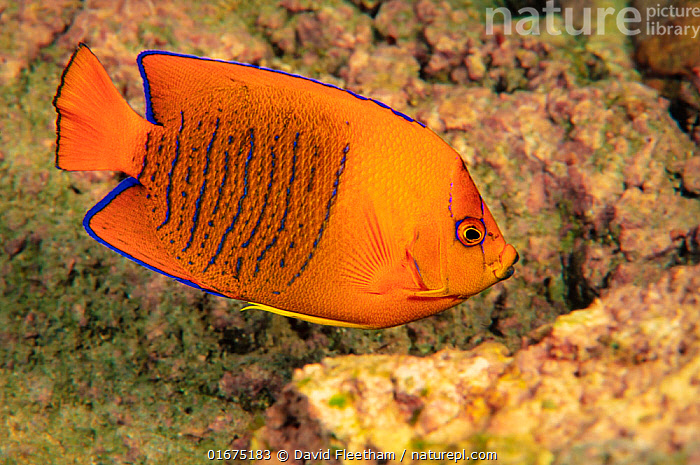 Which Dwarf Angelfish should i go for?
2 3 4