What is your dirty glass telling you & how quick does it get dirty?

Recently I've changed my mind on assessing aquarium state based on how quickly the glass fouls. I have three ~90% acro tanks with a high density of corals. Nutrients are always below levels of detection. In fact, some of my corals have poor color, which I think is due to low nutrients, so I even started dosing nitrate for a while, but wasn't able to get nitrate elevated at the max level I was willing to dose at. At the same time, i would get significant algae, mostly hair algae, growing on the walls of the tank after about a week. Even though the tanks have been running for at least a few years (one around 10 years), it was only ~6 months ago that I added a bunch of turbo snails to complement some tuxedo urchins (I'm not big on cleanup crews). Now, I never see much algae on the glass. Instead, the problem is now coralline algae, but I'm able to go longer (~1 mo.?) before that becomes excessive. So, the animal content of your tank makes a huge difference in what develops on the glass, so water chemistry is just one component. As usual for saltwater tanks, it's complicated!

Big Smelly fish said:
Every few weeks, even then it’s not really noticeable
Click to expand...

You are definitely doing something right!

Like someone said before. I’m amazed on how some don’t need to clean there glass every couple days AT LEAST. It just keeps coming and pho’phate is on low side!

moz71 said:
Like someone said before. I’m amazed on how some don’t need to clean there glass every couple days AT LEAST. It just keeps coming and pho’phate is on low side!
Click to expand...

I'm in the same boat

Yup! Every 2/3 day. I don’t mind it. I see it as a food source for corals mixed in with roids every few days as well. Nothing like super tender algae. Easy to digest.

I Could go a week before the pink start appearing. 2-3 days is the easiest clean up with a mag float any longer it requires a blade.

Haven't figured out how to post pics of my setup yet...so here goes

Can’t Remember What I Did Before Reefing?

Used to clean glass every other day, now I can go a whole week without cleaning glass. Also turned the Light Point Intensity up to 75% after installing these light shades. 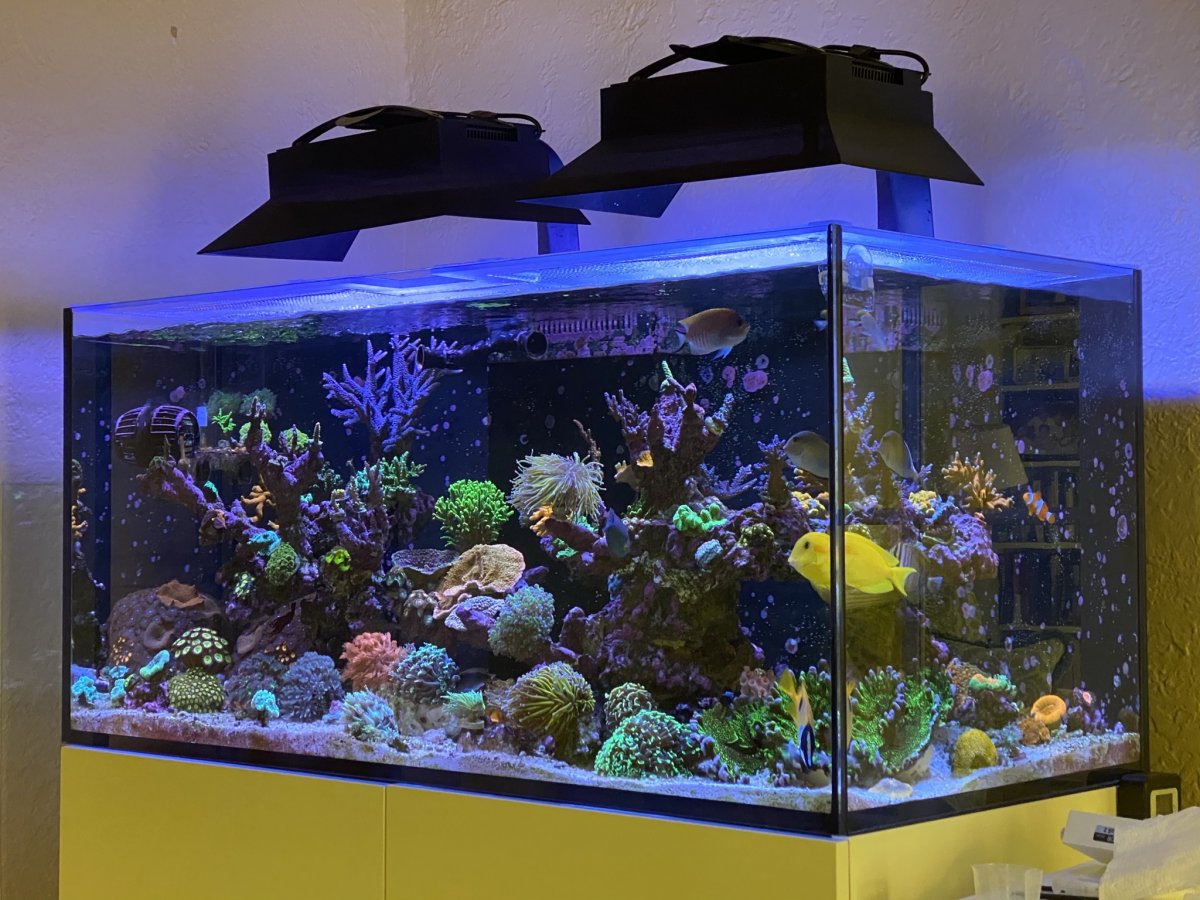 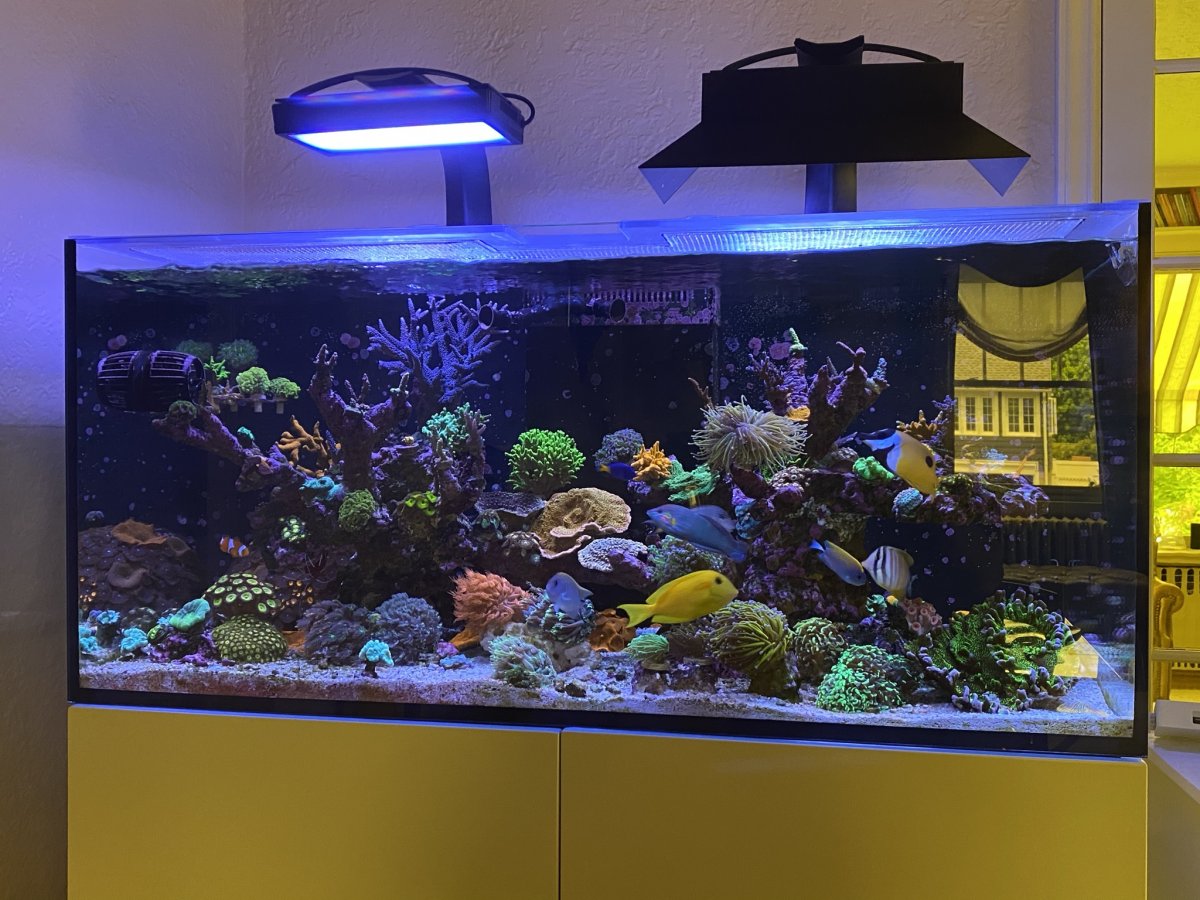 I do mine with my weekly water change.

I have a cube that is viewable on 3 sides and boy or boy, I can clean the glass and it will have pods and algae growing on it within 24 ours. Not much but surely enough to drive me insane. I have been doing better with it though and holding off a few days.

Every couple of days OR...

Every 4 days if I dose calcium carbonate right after cleaning the glass.

To keep mine looking tip top I would need to do it every 2-3 days. I usually end up doing every 4-7 days unfortunately.

There are several things that need to be done when it comes to 'cleaning glass'.
1. Algae: When my phosphates get out of hand the growth is much faster and needs to be cleaned more often.
2. Coraline Algae: This happens all the time some would say it is a sign of a healthy tank others not so much so not sure what to make of it. I noticed when my nutrients went down this growth picked up.
3. Snails.... snail eggs happen frequently on the glass and I try to leave them hoping they will hatch and then move themselves. I would imagine this is a healthy thing for the tank.

I am sure some will disagree with me but that is the hobby.

Ardeus said:
Every couple of days OR...

Every 4 days if I dose calcium carbonate right after cleaning the glass.
Click to expand...

I started dosing calcium carbonate as well after I clean my glass.

fishybizzness said:
I started dosing calcium carbonate as well after I clean my glass.
Click to expand...

Is it also working for you?

The MOAI has got to come out eventually right? It should help with this chore.

Ardeus said:
Is it also working for you?
Click to expand...

I started a few weeks ago and it definitely seems to make a difference. I just changed my uv bulb and cleaned the sleeve so I'll see in a few weeks if there's a big difference.

Glenner’sreef said:
Yup! Every 2/3 day. I don’t mind it. I see it as a food source for corals mixed in with roids every few days as well. Nothing like super tender algae. Easy to digest.

I like this thought. Does the logic hold true even if it's just diatoms? I believe that's the only kind of algae I get growing on my glass.

QUESTION OF THE DAY Leaving space between the Aquascape and Back Glass: Why should you?
2 3 4 5 6

QUESTION OF THE DAY Are you proud or embarrassed of your reef tank?
2 3 4 5 6