When your coral looks sick do you take action or hope for the best? 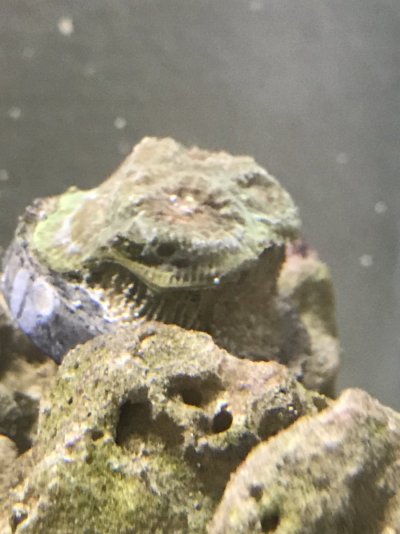 i was gifted this coral and thought 'yeah, definitely dead, will look cool tho, and maybe something will grow on its corpse'. It wasn't and started to recover in a few days; six months later it looks like this. 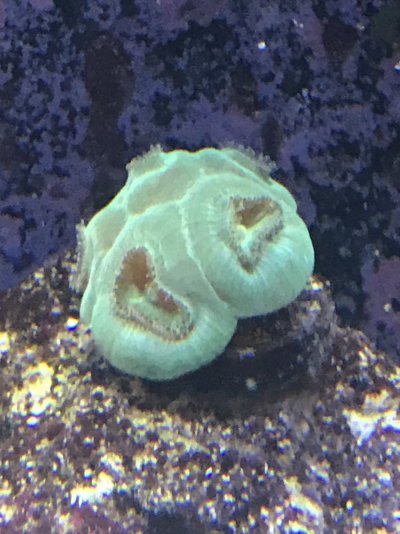 "wait and watch" is my motto, since.
F

Normally I test, do a water change and change carbon. I will dip a coral if I can after observing it for a day or more. I have found some corals just do better in my tank than others.

Owner/ Operator of the worlds most crowded Nano!

Haven’t had it happen YET but if I noticed one of my corals looking “under the weather”, I’d first document all of my parameters and come to this great forum with notes in hand.

Depending on the severity, my first course of action is almost always a water test coupled with a water change. In instances where testable parameters look good, but corals still look off... I conduct an ICP test coupled with water changes. While testing isn't always perfect, I do think that a directional set of data can inform on trends or abnormalities to trigger additional investigation and adjustments.

I'm a big fan of knowing what to change using the data as a guide. Gradual adjustments to dosing, media removals or additions, and even water changes can be done with purpose to eventually "dial-in" stability.

We've likely experienced the "guess-and-check" or "wait-and-see" methods, but there's an added peace of mind when you're making certain decisions with data - I did wish some of the data was more real-time though! Imagine 1-day ICP turnaround times, instead of letting a week go by under the stress of the unknown...!

I do visual check of all equipment, look for pests then do a full battery of test to check for anything out of the ordinary. Make sure I have plenty of mixed water ready for a WC if I need it. Depending on severity of how the coral looks, I may dip them.

Cut it. If no one else said this yet

depending on the coral and what’s going on.

I never act within the hour,

probably actually my best routes have been
Observe,

ill never take any action before that.

after depending on the Coral, and the OTHER corals in my tank I’ll do something.

I have over 30 separate corals, so I’m not gonna do something to my tank for just 1 unless I can see it’s something that’s going to effect my other corals,

Which means that’d be more wide spread water param problem which is only the problem for me with dying coral 25% of the time. But dying is a bad word I’d say “less happy” then the last few days

after the first round of observations I’ll decide what to do.

22% of the time if after 2-3 days it’s not better then I start doing individual Coral treatment.

However if you’re talking about waking up one morning and seeing STN or RTN on sps it’s a much different route.
Last edited: Jan 12, 2021

Adjustment or water change which is extremely rare for me.

I usually wait and see. I have a Kenya tree that every couple of months recedes to the point it looks like I dipped it in gasoline. The first time it did it I freaked but every time it does it after a few days it comes back looking bigger and better then ever. It’s like it goes through some kind of cycle. Other corals not so much. I have a monti that’s five years old that’s looking real bad. No changes to circulation lighting or parameters. I’m stumped. Anyone got any sugestions?

Depends on how fast things are progressing. But usually, check parameters, do WC, take a backup frag, observe/look for irritants, dip coral if needed / reasonable for situation.

I spring into action and start shopping.

revhtree said:
We all know that sinking feeling of walking into the room to view your reef tank and seeing a coral that looks to be sick or getting sick! It has happened to us all and it doesn't feel good. Obviously some coral can "look" sick but not really be suffering from sickness. But there are certain coral that you know without a doubt when they are looking bad! So when that happens what do you do? What's the steps you take? Let's talk about it! 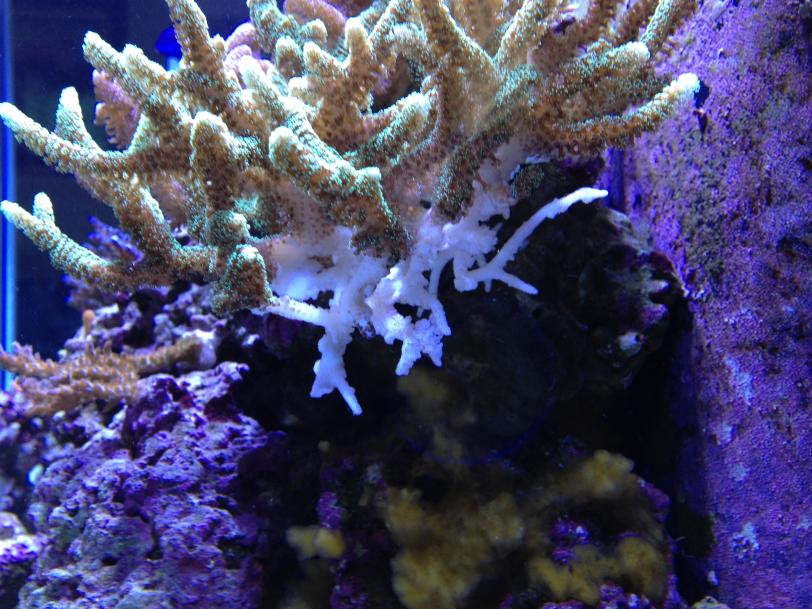 I inspect them for any parasites, take note of if any is dead or dying and look up what to do for ehatever i found, my mini reef vonsists of frags, only been in reef tanks for about 8 mos. So have lots to learn.

As most have said, it depends on many factors. For me, how bad is the damage? If it is just mad, I may check its neighbors and see if we have issues. If is is receding, I will check neighbors, other corals, flow, lights and then decide whether to dip. Sometimes I just try to feed more, etc.
Cannot think of the last time I actually checked parameters. Maybe 2010?
E

If my coral looked like that picture, almost certainly RTN, and whilst you can try stuff, it’ll likely done for.

I‘ve had a couple of acros recover from STN, I removed it, cut off the plug and all of the dead, making sure to cut away enough, i tend to double dip, often with dettol (disinfectant) then an iodine based dip. Replug, making sure to use super glue over the cut, and often this will stop it.

Typically though, there is a reason, so check and test everything.

Some theories are that STN and RTN are bacterial issues, caused by another factor making the coral weak, allowing the bacteria to take over. Triton has a liquid to dose for STN and RTN, this apparently creates some sort of "bubble" (for want of a better description) around the coral and helping to rid it of the bacteria. I have both on hand, but I've not tried either.
Last edited: Jan 12, 2021

Recent example, had a monti start to RTN, immediately looked up causes , decided to frag the leftover tissue and dip for infection, unfortunately was unable to save the coral. If I had noticed about 12 hours sooner I might have been able to save it.

My corals can't get any sicker than they are; they are long dead ! 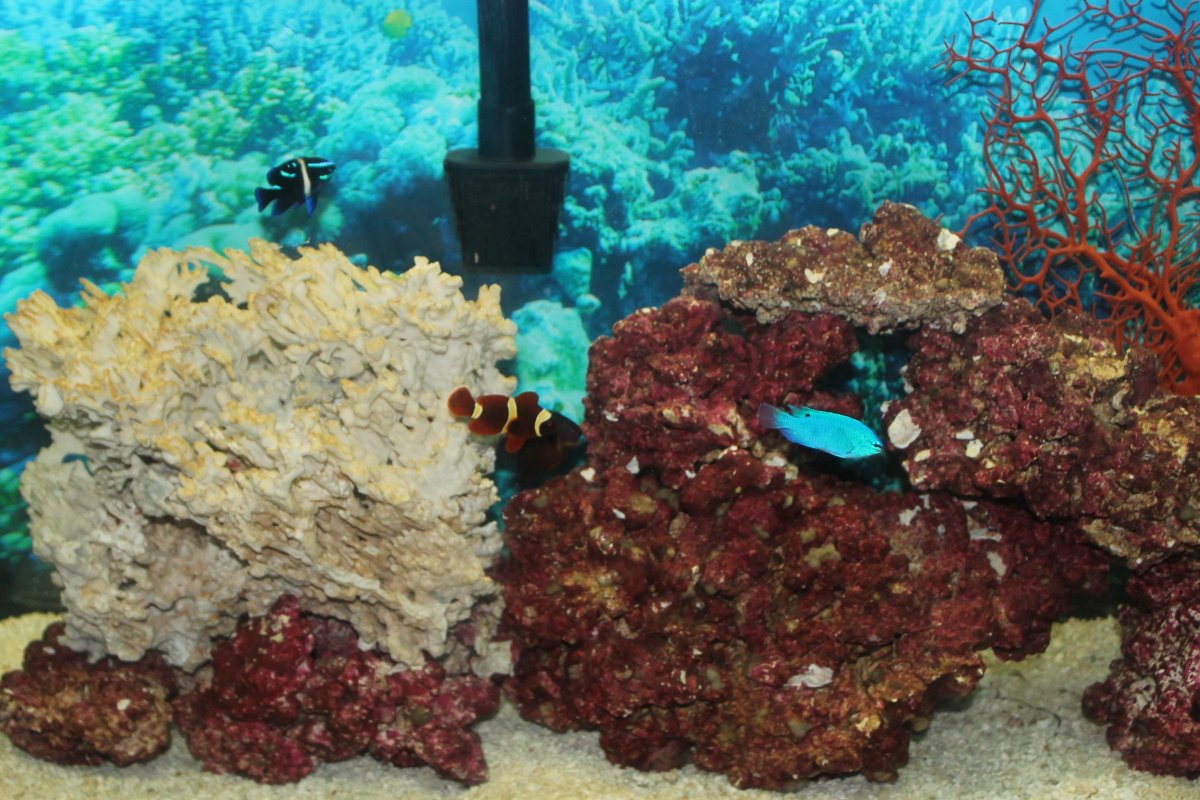 It depends on the coral. Not only if it is expensive vs cheap (although that is a factor, I wont make much change if one cheap coral looks bad), but also the type. If a torch is looking bad, i would start testing, possible move location because BJD could wipe them out. On the other hand if a softie looks bad, usually they bounce back on their own.

I'm in the "it depends" camp. Sometimes corals are just irritated and messing with them too much makes them worse. If it's RTN or something like the lps melting before my eyes, then yes. But if it's just grumpy wait and see for at least a bit. If everything is upset, then I check my parameters. I definitely almost killed my anemone recently (I know, not coral, but still) when it stayed deflated for a full day and then I tried to flush it after reading an article on here.... then I read some more on here and everyone was like "they do that" so I left it alone and it got better. Here's what it's up to today. 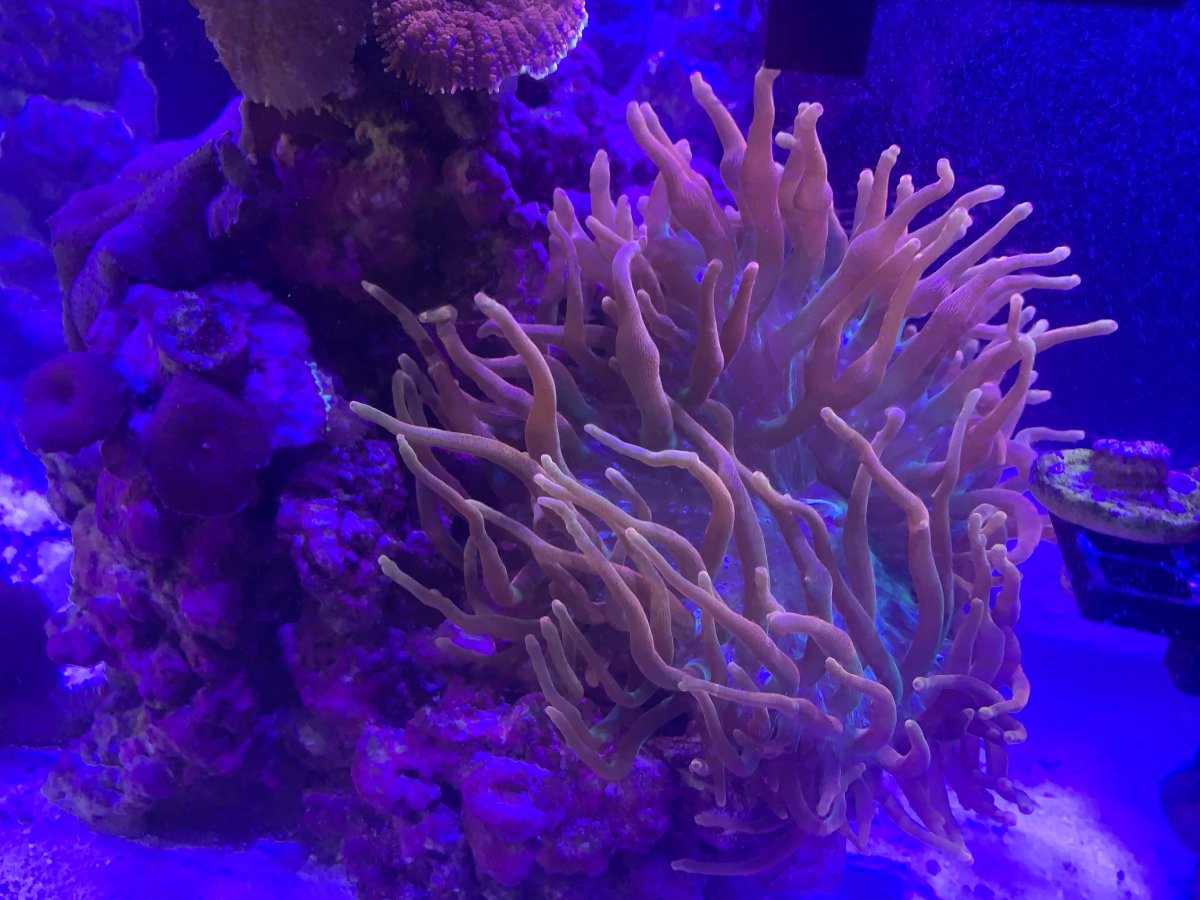 I take actions IF the actions needed do not require “full tank changes”.

If it is something simple as too much light, not enough, innadequate flow, coral warfare I simply move the coral.

Many times I have dipped corals thinking about pests.

When it is just a small part of the coral that suffers from warfare and the colony is good, I let it be.

I have some zoas and palys put together that often require trimming, otherwise the most aggressive would be the only survivors... 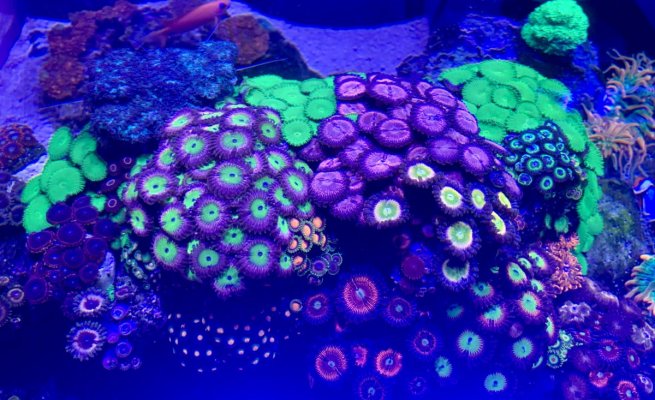 QUESTION OF THE DAY What fish food is best for the overall health of your corals? Is dry bad? Is frozen bad?
2 3 4

S
What do you do or how do you feel when the corals you receive look nothing like the venders pictures?
2 3

When buying coral, how do you deem them healthy?