Who sells the best corals online...GO!

Im surprised no one has mentioned AquaSD yet. They get 100s of corals in ever week and update the website most every Saturday/Sunday. I have bought many pieces from them. Everything so far has been well photographed, healthy, the size represented and not terribly expensive. Their shipping is also very reasonable. They also often get in some pretty unique pieces that you don’t see often.

I have to give a second nod to @PacificEastAquaculture. They have great specials pretty frequently, and their customer service is top-notch. I had a shipping issue with my last order (not their fault), and within five minutes of me sending an email to them, Rachel was on the phone with me and trying to help me get the issue fixed - on a Saturday. She called back at least two or three times that day, and again to follow up on Monday and Tuesday.

Currently, my only corals from PacEast are the ones from that order, but that's more my fault - I've had more than a few tank crashes over the years, and I've lost some really nice corals that they sent me. In this most recent order, though, they had a great deal on Euphyllia - three corals for $90. Ended up with a generously sized hammer coral, a cristata torch, and a glabrescens torch, all good sized and doing well despite teh shipping ordeal.

They don't always have some of the crazier color morphs like @WWC or @TCK Corals, but what they do have is always healthy, decently sized, and fairly priced, especially when they have their specials running. And if you're willing to let them pick out corals for you in their frag packs, you can get some really nice deals there.

Cali Kid Corals is almost exclusively my Go-To.
Golden State Corals is also great. Includes a packet of CoralRX and a sample of ReefRoids in each shipment.

Austin Aqua Farms is my favorite. 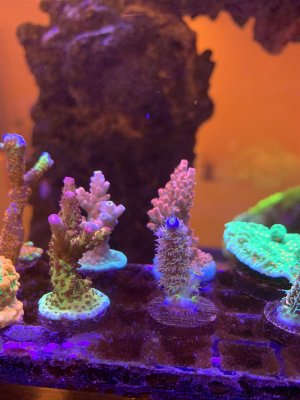 My favorite big box is definitely Living Reef Orlando. They won’t sell you a coral unless it’s 100% and everything I’ve gotten has been better than the photos.
After this thread I will also give a shot to TCK.

I can’t pick just one. I know that was the request, but there’s no way I can not name @Battlecorals and @CherryCorals. Although I have had many more experiences with @CherryCorals, both of these places are top notch, and to be quite honest, Adam at @Battlecorals is one of the very few people whose word I take as gospel. The evidence is all over both of their websites.

I don’t usually get too excited over live sales, but when Cherry Corals does Polypalooza, some of the deals are unbelievable. This sale does make my home life a living hell for a day or two, but once those “frags” arrive (Frags is in quotations because they’re more like a mini colony) for me it’s like Christmas. I know from talking with both companies that they are EXTREMELY cautious when adding new colonies and also have a quarantine process. I still quarantine regardless, but have never found a pest on any piece I have ordered. To me, the fact that they are already doing it is priceless. To top it off, not only are their corals packaged with TLC, they somehow manage to include the ability to immediately tune out the wife’s complaints about what was spent the moment that box is sliced open. Above all else, the customer service from both of these companies should be the gold standard. Individuals who are genuinely willing to take the time to answer questions and explain things are becoming harder to find unfortunately, but these guys have it. Ultimately their customer service made me a customer for life.

BighohoReef said:
Share one coral vendor to rule them all...

Bonus points:
Share why you think they are the best vendor

Name one coral you’ve purchased from that vendor that RULES them all.
Click to expand...

Not WWC unless you want to be 40% over charged

geversole01 said:
Website is being refreshed. @FraghouseCorals can you give a go live date for the site
Click to expand...

I’ve been to their site 3 times in 3 years. Each time it has been “refreshed”. Some of the “online vendors”. Are more live sale vendors with a crappy websites. What Adam does at @Battlecorals is truly special and the way it should be done to a minimum. To be honest I have never ordered from him but it is the site I look at the most to get consistent eye candy and color variety ideas for my next purchase. Adam it’s only a matter of time I promise.

Adam @Battlecorals is the man! He will definitely take care of you!!! #Battleboxes!!

Right now I like Oceans' Garden aquaculture. Bought a ORA Orange Setosa Montipora from them. Fragrance was ~3 - 4". Price is reasonable and shipping was one of the lowest price I have found. It came in packaged very well. They sell a lot of ORA coral. Planning and buying more from them.
I

Johniejumbo said:
HTCorals has been my go to for my last couple of orders. Great prices and great corals.
Click to expand...

Didn’t know about this place. Thanks for sharing!
Website https://www.hiddentreasurecorals.com/

Heabel7 said:
I’ve been to their site 3 times in 3 years. Each time it has been “refreshed”. Some of the “online vendors”. Are more live sale vendors with a crappy websites. What Adam does at @Battlecorals is truly special and the way it should be done to a minimum. To be honest I have never ordered from him but it is the site I look at the most to get consistent eye candy and color variety ideas for my next purchase. Adam it’s only a matter of time I promise.
Click to expand...

I remember seeing a post that fraghouse was going to be going away from live sales and running the website full time now. I believe its supposed to up and running in a month or so. I agree on battlecorals I have a couple of Adams corals and I agree his website is full of eye candy for sure

So far I've had great experiences with all my online orders over the past year, the following all had reliable pictures and reasonable prices
@AquaSD - large selection and constantly updated
@TMA - got a great Pectinia from them
saltyunderground.com - for the Nudibranch
@TCK Corals - great live sale
C

https://reefnation.com/store/ they are also on eBay -
great stuff!!!
M

@Battlecorals !!! Adam is awesome and his corals are gorgeous and healthy!
O

I have had great luck with Tidal gardens in Ohio one time I had a problem they responded right away and fixed it. Also get a $10 or $15 coupon for next order. They also show you a pictures in multiple lightings.

Johniejumbo said:
HTCorals has been my go to for my last couple of orders. Great prices and great corals.
Click to expand...

Thanks for the shoutout! Happy Reefing all!