Why is it snowing on my live rock?

Anybody know what this snow is? (And what may have caused this?)

What changed around the time the snow appeared? (about a week ago)

Lights? (bleaching the algae?) I've had an old 2 bulb T5 fixture, but just added a neptune sky 12 inches up only at 25% (afraid of the ugly stage).

Chemistry? Ammonia, Nitrite and Nitrate are all fine. DKH is 11 in the new saltwater (which I believe is normal for Reef Crystals), but my display has been testing around 8. I'm so concerned about major chemistry swings between boxes of Reef Crystals that I've purchased Red Sea Salt for more stability going forward. I don't yet have tests for magnesium and calcium, but I know I'll need to start checking those too.

Ugly Stage? Is this just an occasional part of the new tank ugly stage I've never heard about? (i.e. and it will go away?)

Tangs (and lawnmower blenny)? Could the tanks have scraped the algae down to the rock in all these places leaving these white patches?

Tank Context:
120 Gallons, 40 breeder sump.
4 month dry rock cycle (bleached rock to start back in January)
To avoid pests, I've been quarantining everything (fish 60 days, inverts 76 days, coral 76 days)
When done, I've moved some of each to the display tank over the past 4 to 6 weeks.
Green algae started when I turned lights on for corals, I have some coralline algae started from one coral frag.
The "snow" started appearing about a week ago among the green algae, not just near the lights but on several rocks down in the sand.
I've tried to scrape it off to see if it's on top of the algae or even the bare rock itself, but I couldn't rub or flake anything off, and it's whiter than the Pukani was even right after being bleached. While the lights make it almost "glow" white, with the lights off it's not as obvious, but it's clear the algae's either replaced or covered there, but not nearly as noticeable.

Any insight would be most appreciated.
Thanks,
Steve 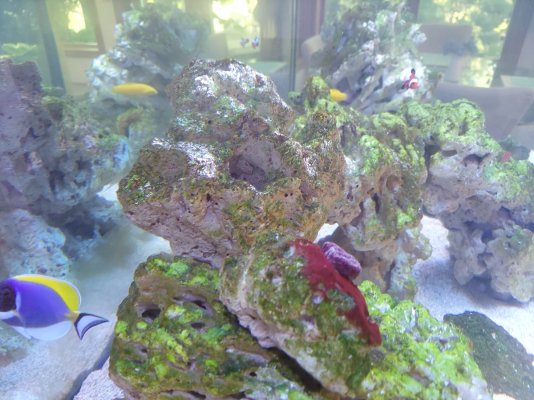 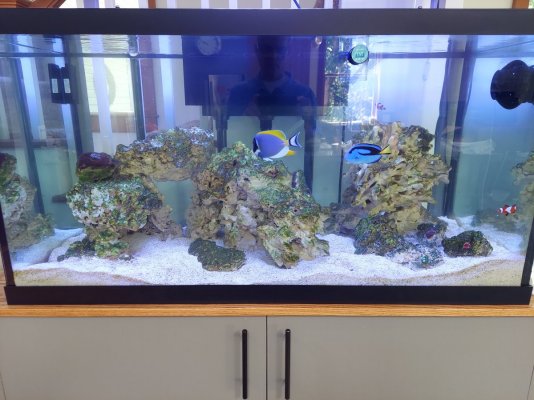 Does it have a Christmas Tree worm on it?

Could be your fish. My dottybacks enjoy blowing sand on rocks, and I have no idea why.

Looks totally normal to me. Part of the transformation of a new tank. Mine looked the same.