WOW it's BIG! The largest coral you've ever grown?

Today let's talk about BIG corals! To me there's something pretty amazing about seeing very large corals grown in a home aquarium! In the wild it's very common to see extra large corals but in our homes it's not an easy task! So today I would like for us to talk about the biggest corals we have grown and of course "this thread is worthless without pics!"

1. What's the biggest coral you have ever grown and what was the actual size? Pics please if you have it!

2. What are the challenges of trying to grow extra large corals in the home aquarium?


@uniquecorals knows how to grow them big! Nice guns Joe! 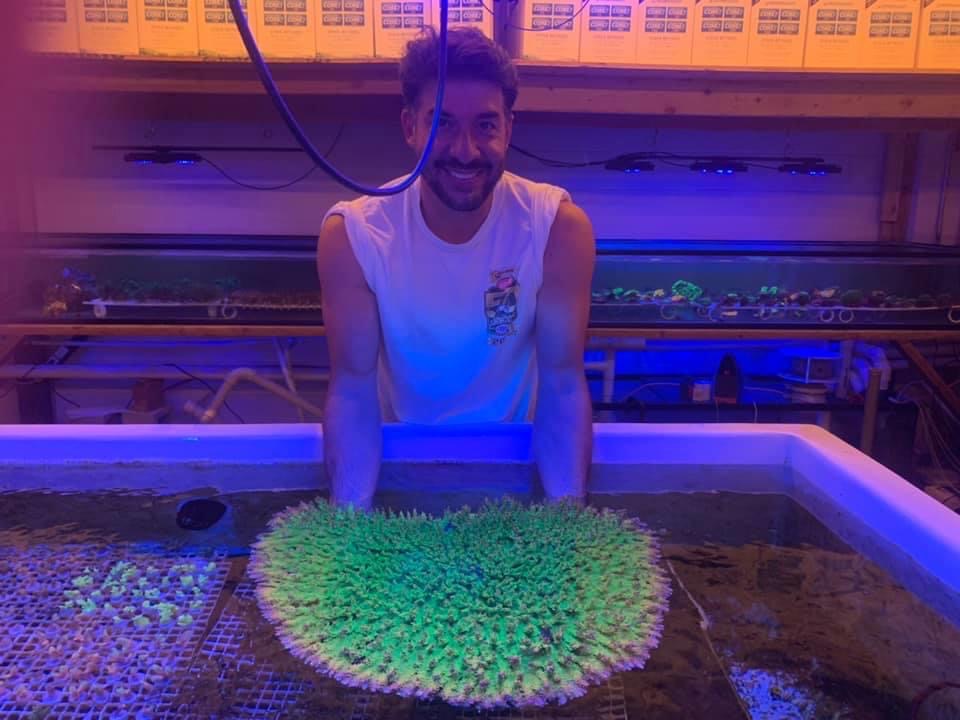 It is just a monticap so nothing spectacular they grow fast anyway. My current set up is only one and a half years old so nothing to really get exabout yet. I am looking forward to seeing pics from what others have grown.

personal favorites are sps corals that “table” out. Let’s see those pics please.

Enjoy the hobby my friends.

The title of this thread leads to a very well know joke that isn't appropriate here....But omg so perfect lol.

I had a Ritteri Anemone that was almost 36" across fully opened. Had it as the centerpiece in my 180g back in the day. Love seeing HUGE colonies. 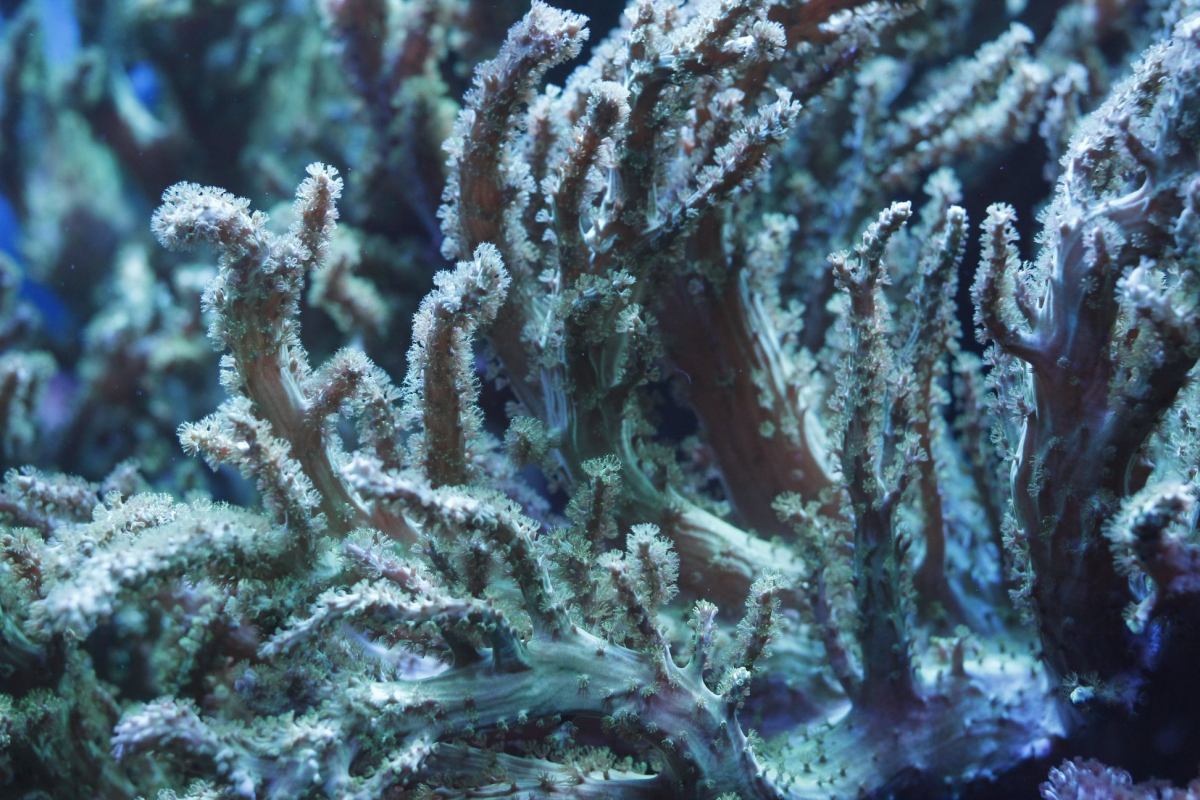 I can say this is just a green leather, but It's not easy to grow a coral, any coral this big in a medium sized tank. It did start as a little 1 or 2" frag but the hard part has been finding room for it in the tank, having it fall over several times because eventually it got so heavy it would break the glue / epoxy bond or simply fall over due to its weight.

Tank is 60" long, I would say it's at least 25x14 plus pretty tall. Probably more like 30"+ as it is angled and sometimes stretches out further then in the photo. I have fragged it several times and probably will have to eventually trim it as it is starting to sting the gorgonian to the left of it, where as before they'd just touch a bit now they end up resting on each other which has caused minor die off on the gorgonian.

The biggest reason I am reluctant to frag this giant is one day I will get a big tank, and when that day comes I want to have big colonies to put in it. That and having big colonies no matter the coral is always more impressive then tiny rainbow frags. I love watching the fish swim in and out of it.

The goniopora to the right of it may eventually give it a run for it's money. I've had it for a few years less and again not a crazy variety but it started on a standard sized frag plug and seems to be really taking off lately.

Most of the corals in my tank are in the 13"-24" range. True of my monti's, tabling acro's, millipora, and stags. For reference, the Hippo tang is roughly 8" long.

Here's what I think was the largest colony we moved when we closed the old Aquarium for the rebuild. Or at least the main part of the colony, some parts fell when we moved it. 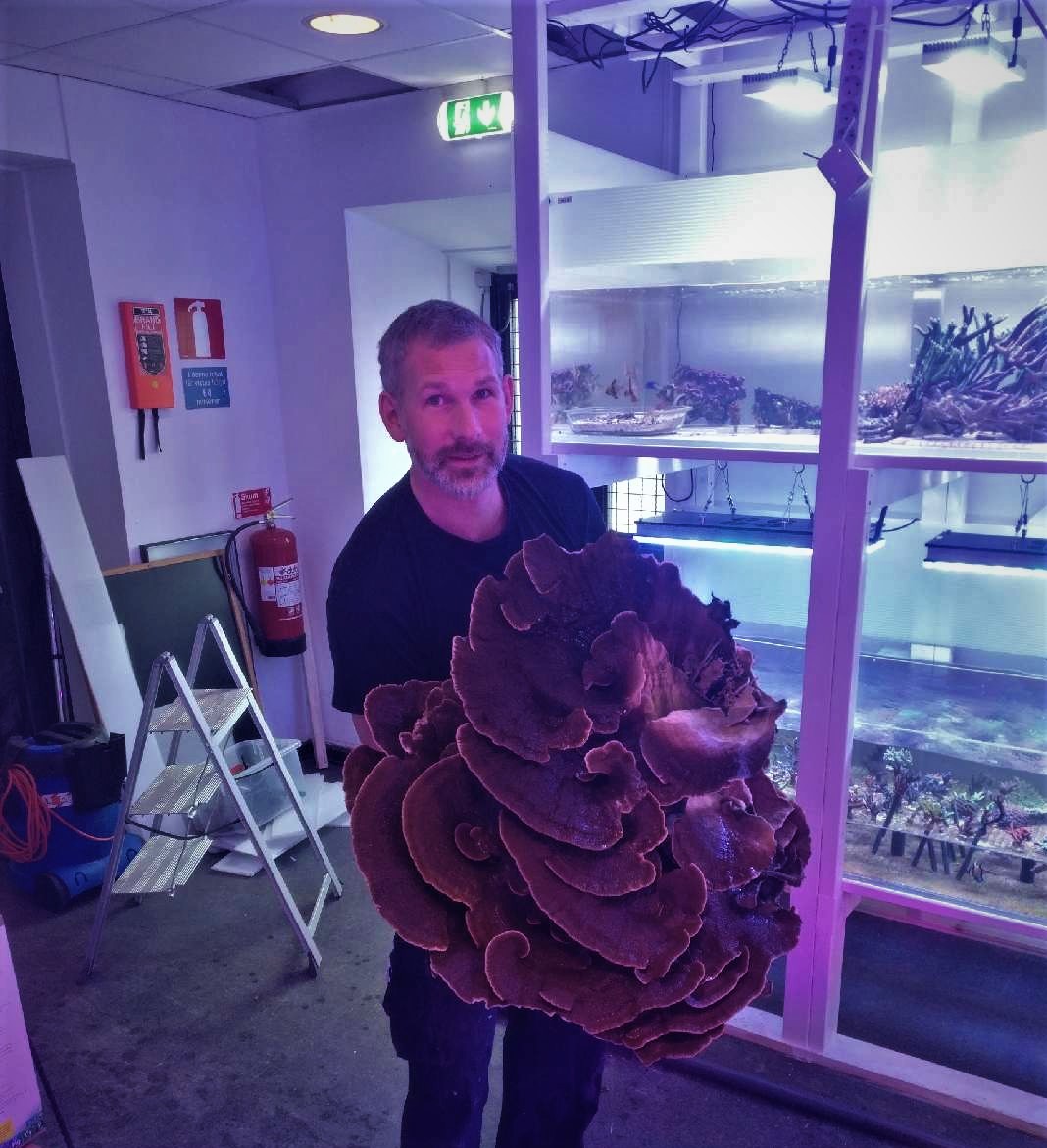 I just meassured it today. It's 100 x 87 cm. Coffee cup for comparison 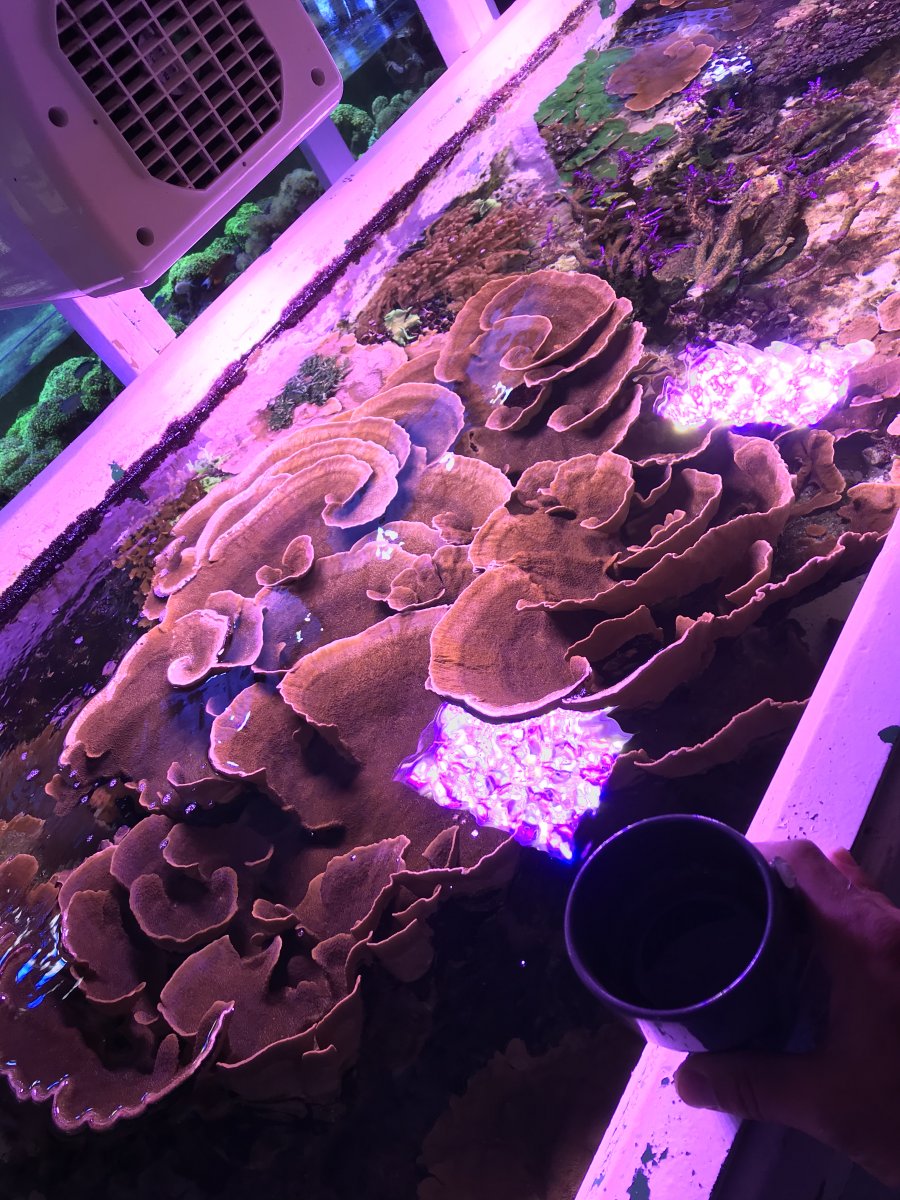 We had a couple of Acropora staghorn colonies that were the same size, but they were harder to move in one piece. The Acropora hyacinthus below was the largest table Acropora we had (it's in smaller pieces now). 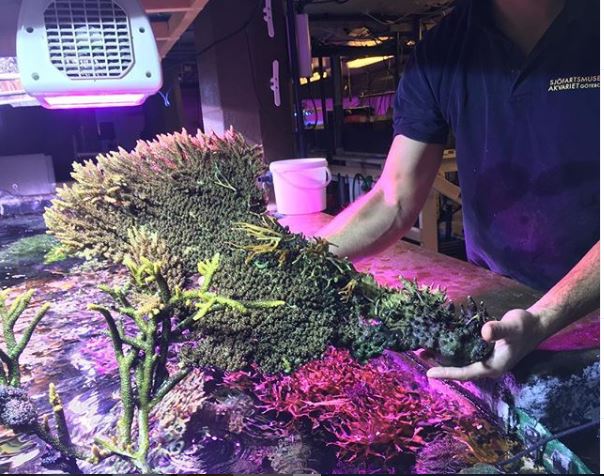 Both grown in the 10000L tank in my profile, so at a public aquarium not in a home aquarium

I have leather that seems to grow faster with every trim. Probably about 8-10" wide now. Biggest coral in my tank and I can't manage its growth lol. 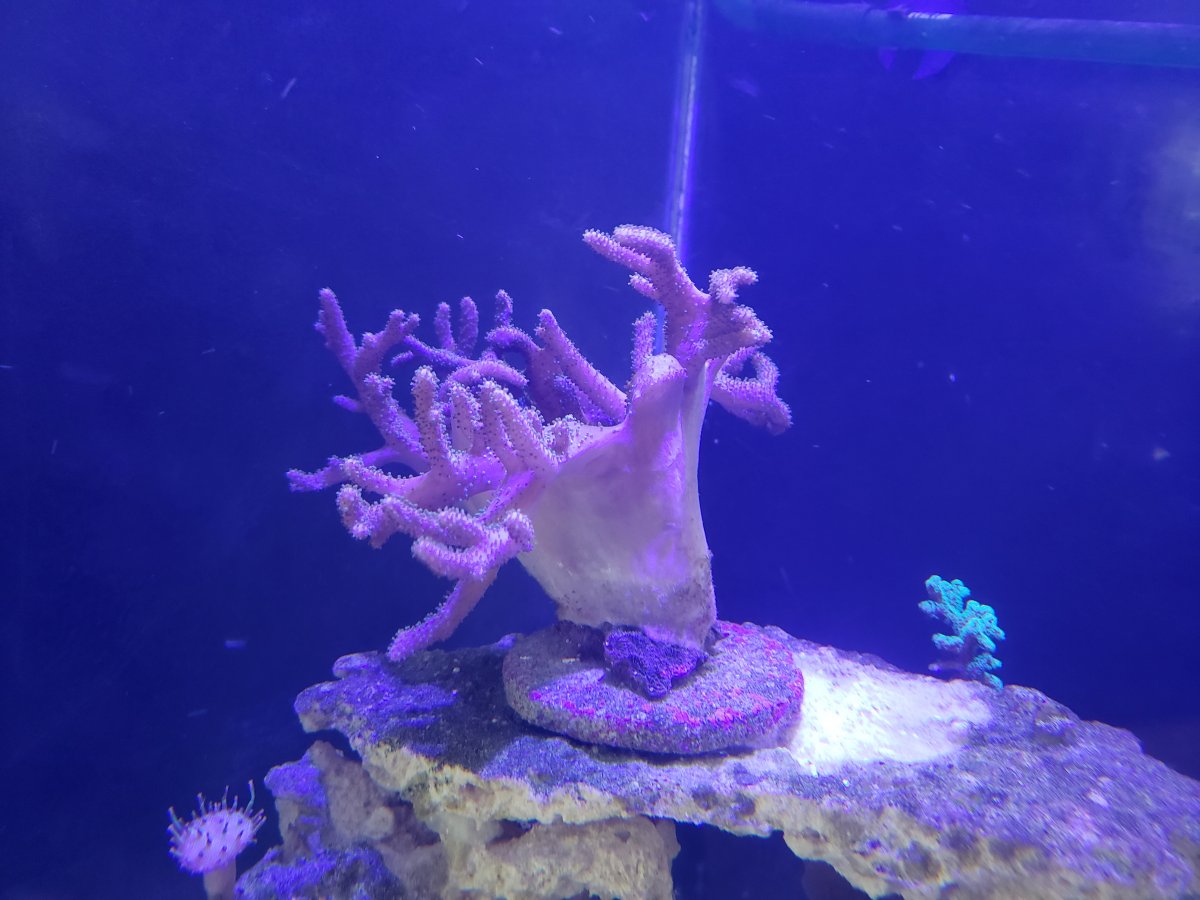 Currently have a devils hand that is everybit as big. 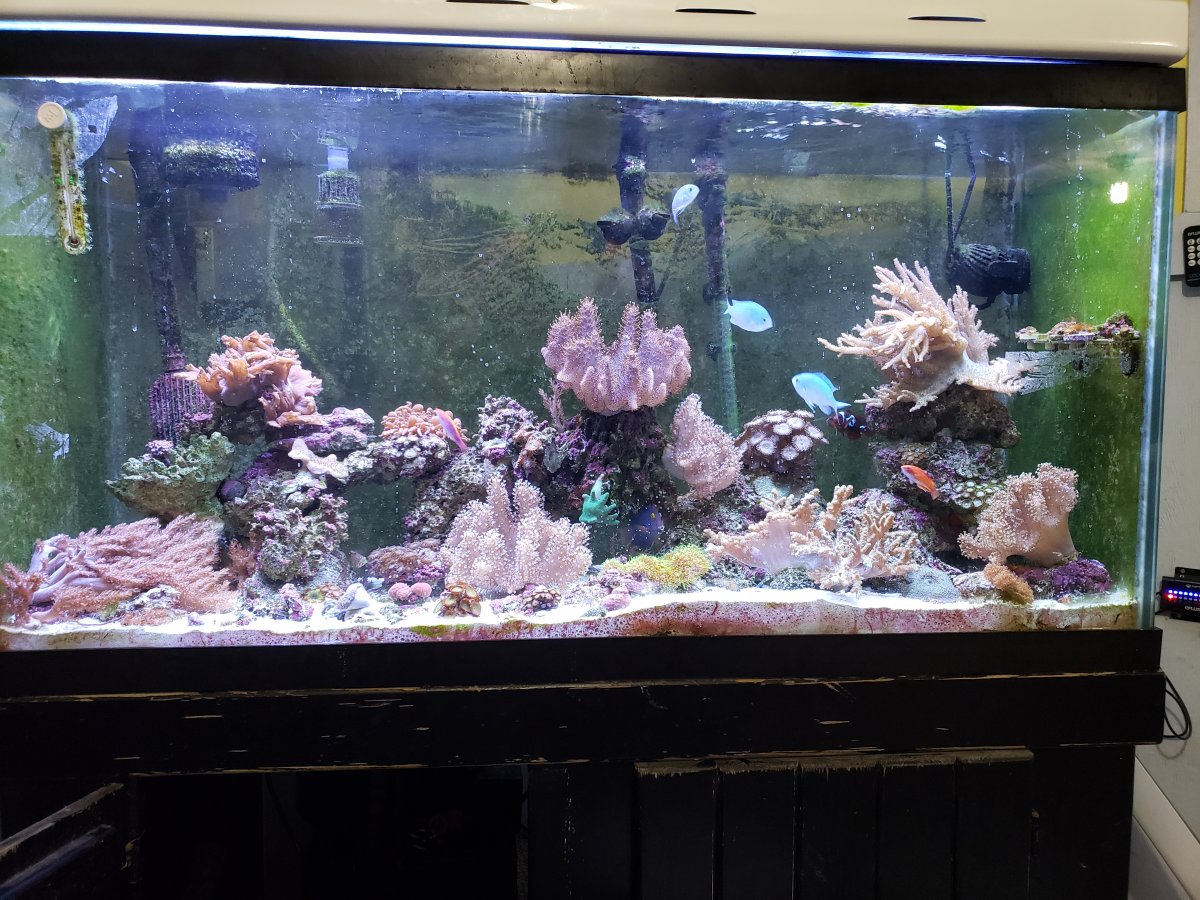 I've got the biggest brain ever! I can't actually back up the claim but it is a very big brain, roughly the size of half a volleyball. 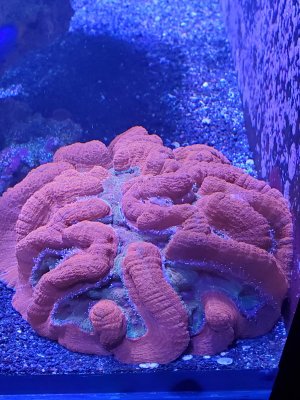 the red plating monti palawanensis that spanned nearly front to back of the Innovative Marine Fusion 30 Long display section (12") at one point.

One of mine would be this Acropora Tenuis back in 2001. It was approximately 15"x15" 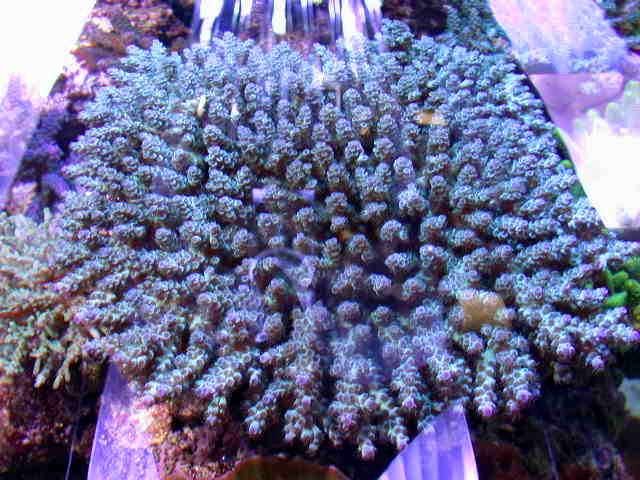 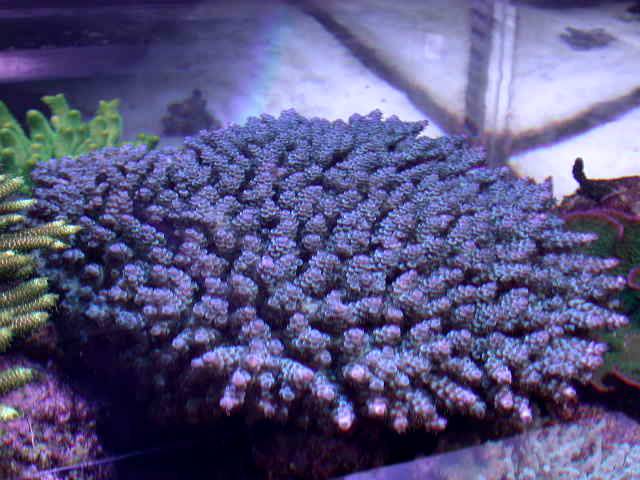 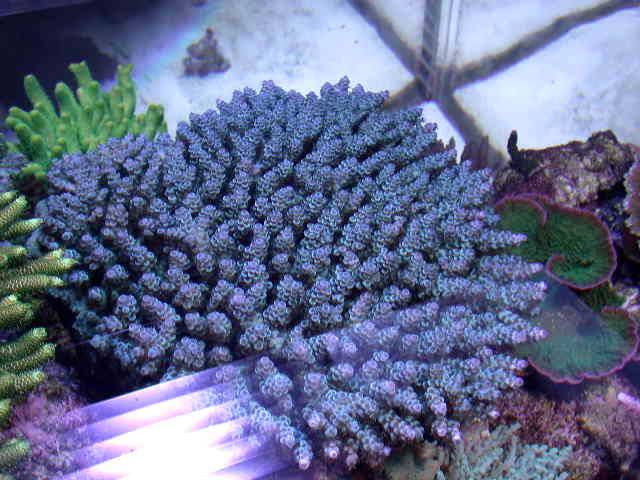 I’ve had this no name chalice for almost 12yrs. It’s the size of a dinner plate, but, I frag a few inches worth of frags for our local swap every year! 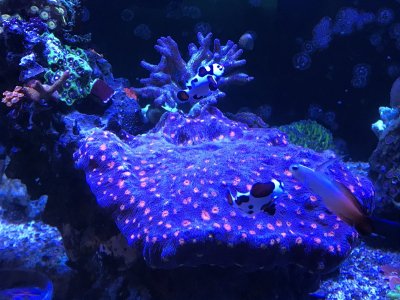 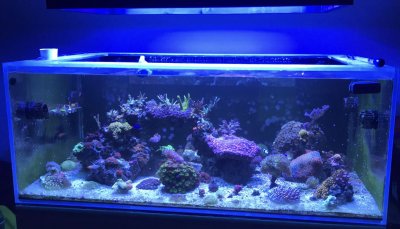 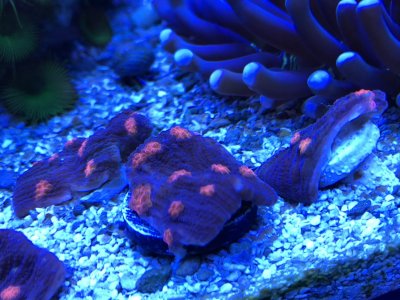 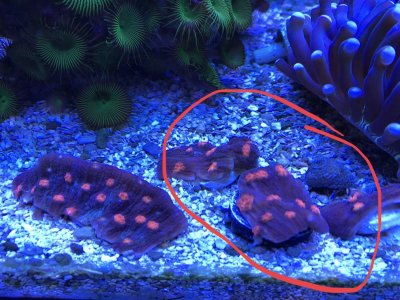 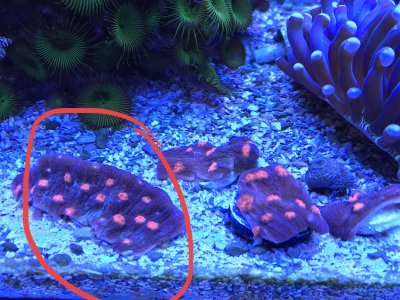 Don’t mind the red circle, these pics are from the last time I sold a few
Last edited: Aug 5, 2020 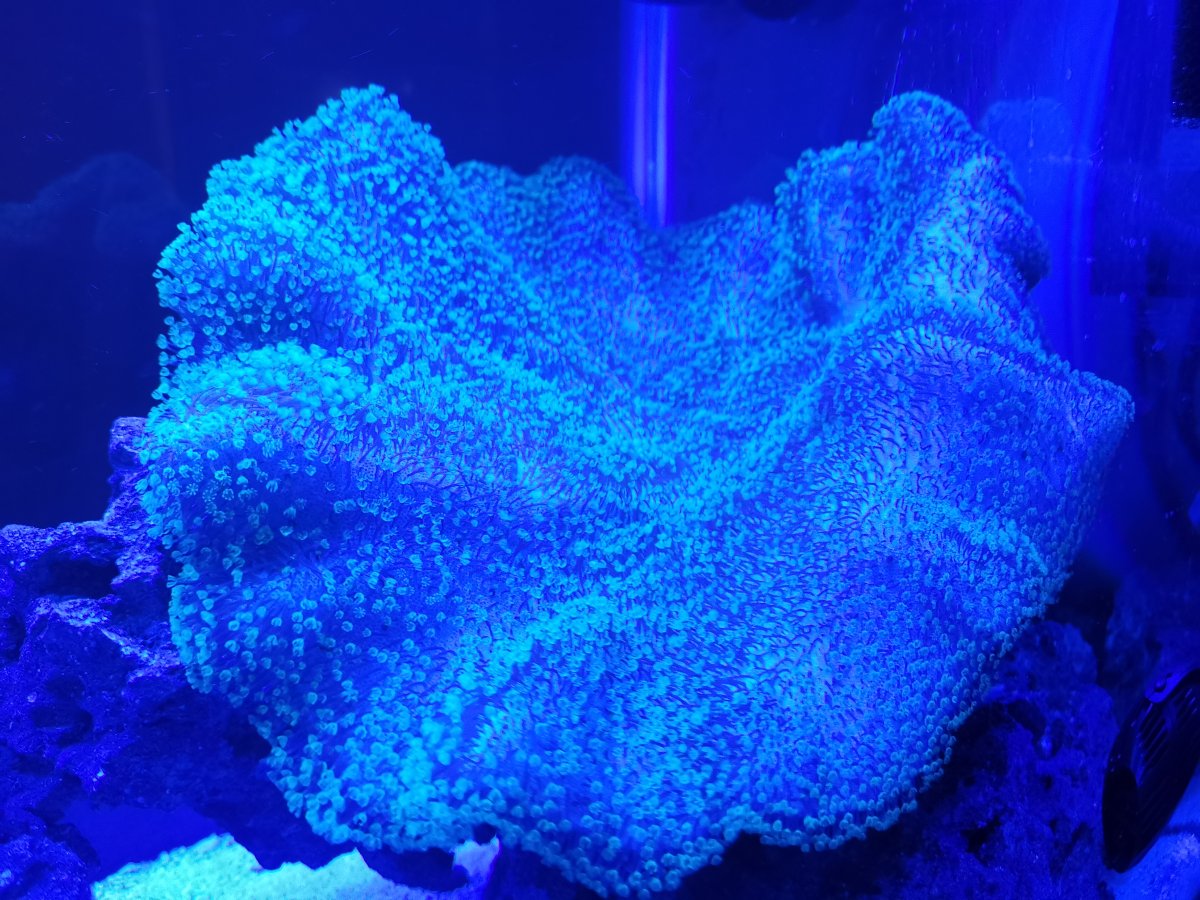 Some incredible pics above.

Both of these started as 1" frags (just shy of 2 years) they barely covered the frag plug. This is today currently 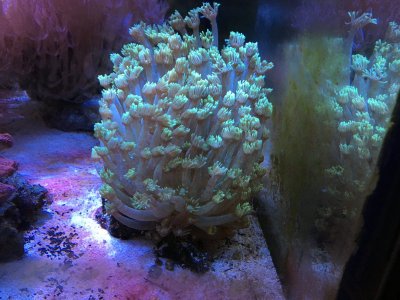 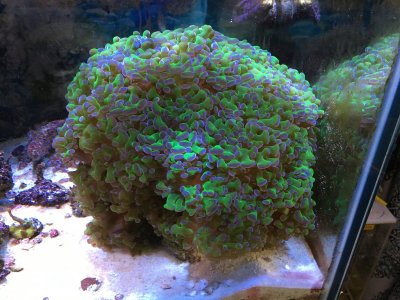 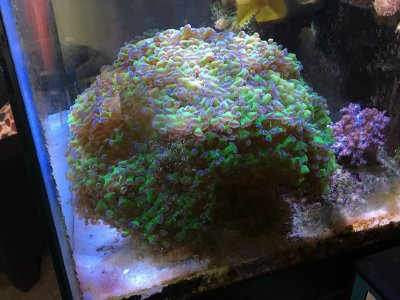 This is another one from my coral farm, North Star Corals, back in the early 2000's, this is NSC Pink Clathrata, it was approximately 18" in diameter. I now have a piece of this growing out that I got from Adam @Battlecorals and it's doing beautifully!

Back in the day: 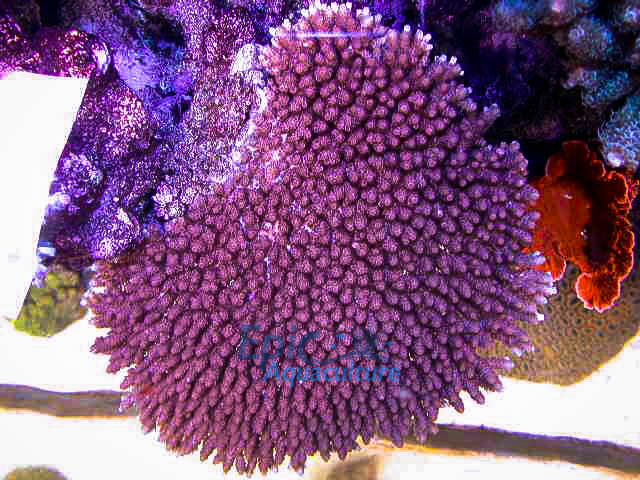 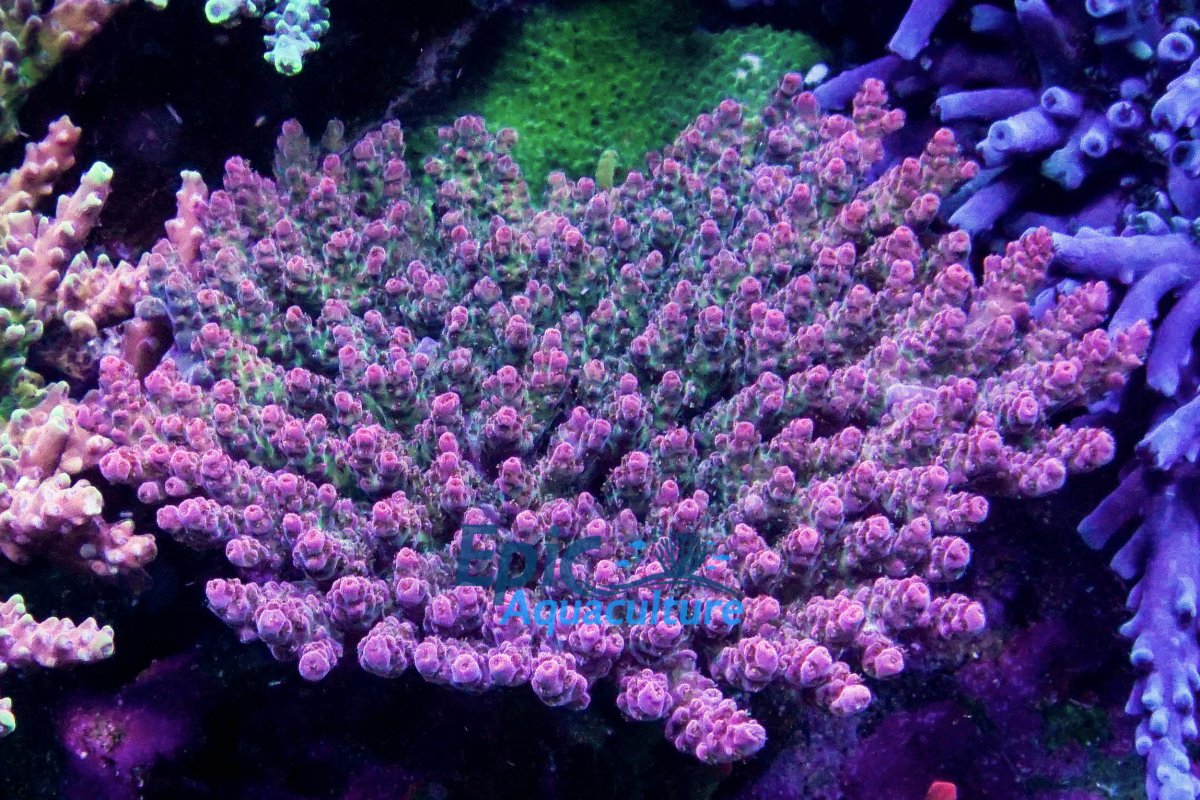 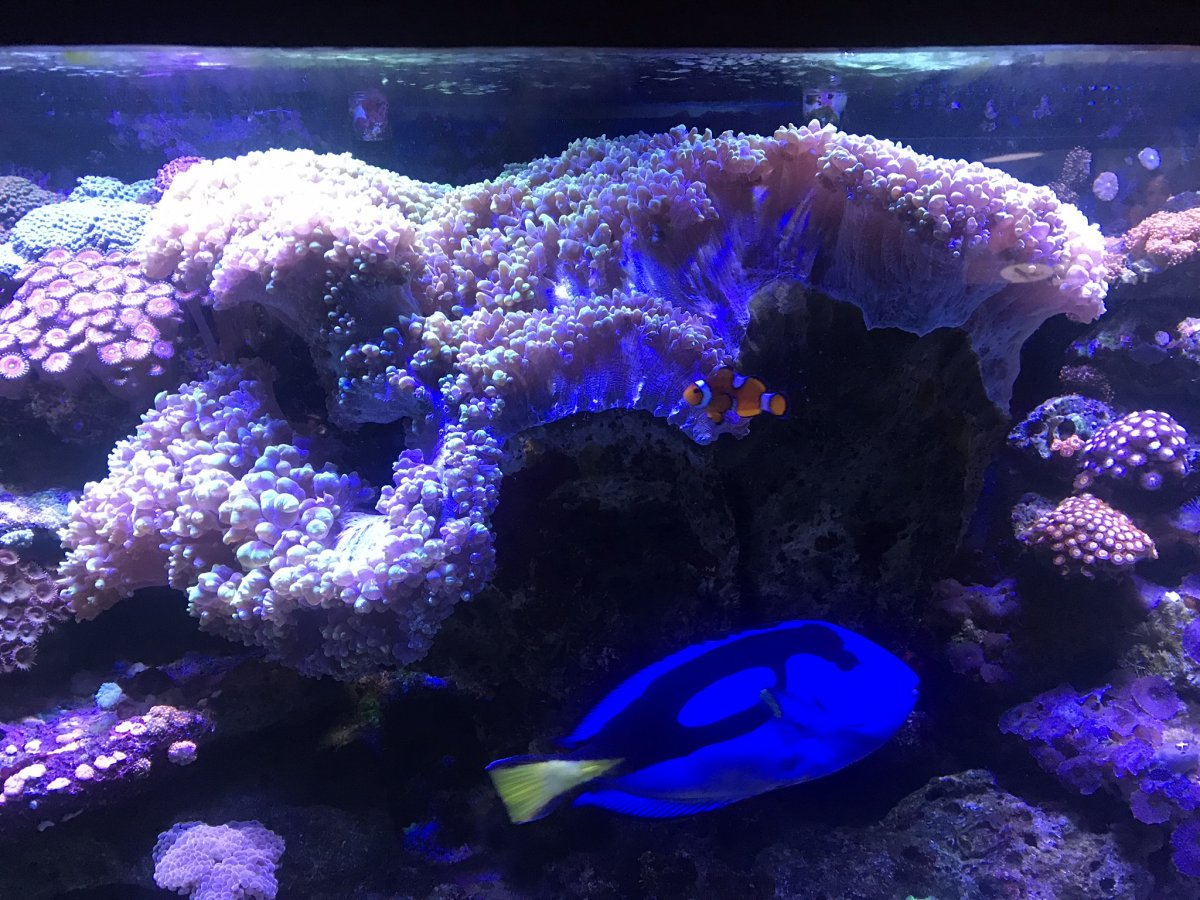 Biggest in my tank is an elegance that is getting close to basketball size right now. Will probably need to find a new home for it soon as I've had to make a wall of rocks around it to prevent it from stinging all of my trachys and lobos.

It has also eaten 40-50 snails in the last six months. Its just a graveyard of shells all around the base of it. They either fall in and get swallowed up or the tentacles grab them off the overflow box.

I would say my toadstools and leathers are the biggest. I’ve fragged the neon one 3x with about 20 frags each time. Moved it this time to a better spot.
biggest problem: shading 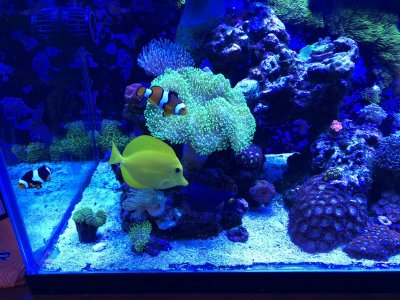 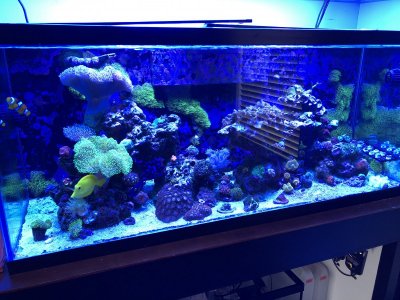 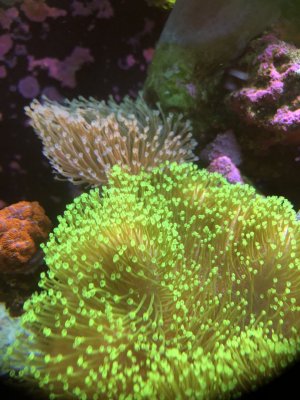 Some years ago I had a turbinaria reniformis that was about 14" in diameter. When I tore down that tank, I almost couldn't get it out through the tank bracing. Plus it was heavy as *&#$!

Have had a few huge anemones 24” +. But the biggest coral was a giant colt coral bent over at the surface. Was the first to go after hurricane Ivan, followed by total tank crash.