Asterina starfish appeared last night. 3 on the glass.
The 75 has been up quite a while now.
I haven't added anything to the tank in months.
It always amazes me when something new seems to appear out of nowhere.

Love that! Six month into my live rock, I would still find new critters popping up. Best part of reefing.

WVNed said:
Asterina starfish appeared last night. 3 on the glass.
The 75 has been up quite a while now.
I haven't added anything to the tank in months.
It always amazes me when something new seems to appear out of nowhere.
Click to expand...

Yep. Those stars are sneaky.
OP

and it is set
next I will paint the back and then start the plumbing. 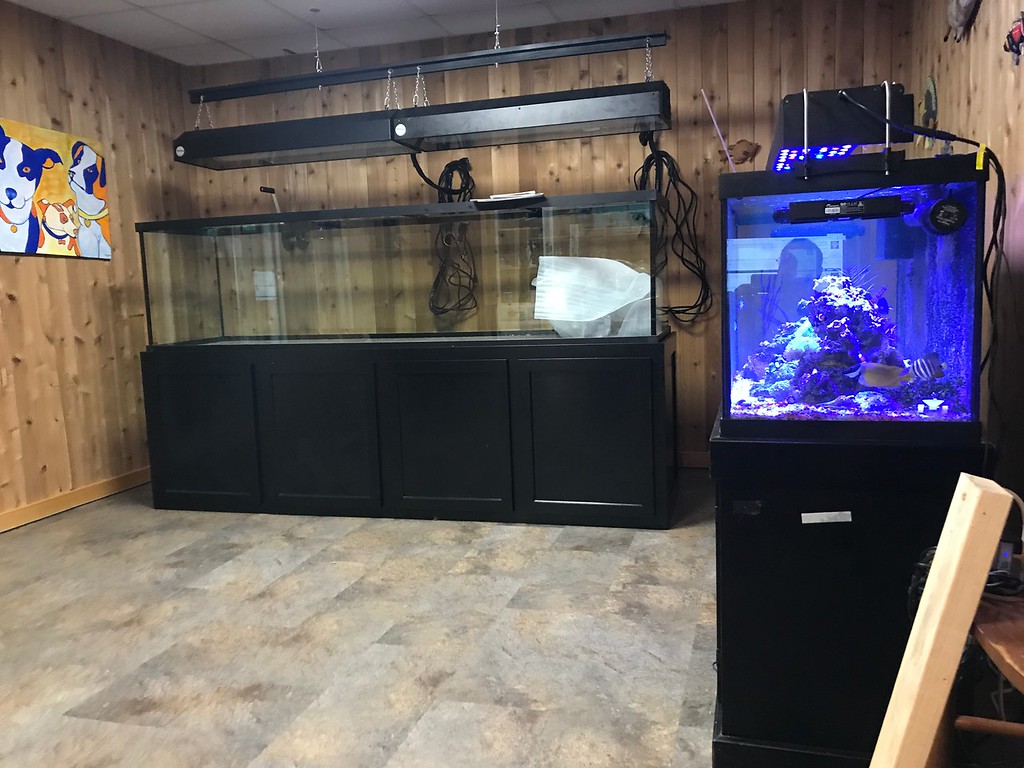 This does the trick. I can reach the bottom in the back. 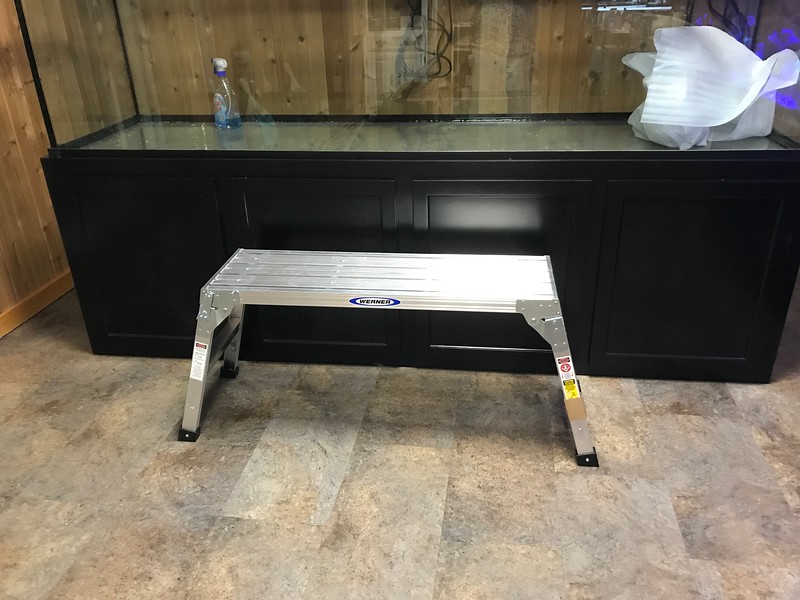 Time to tape it up and paint it.

It's painted. I did a fade with blue at the top and black at the bottom 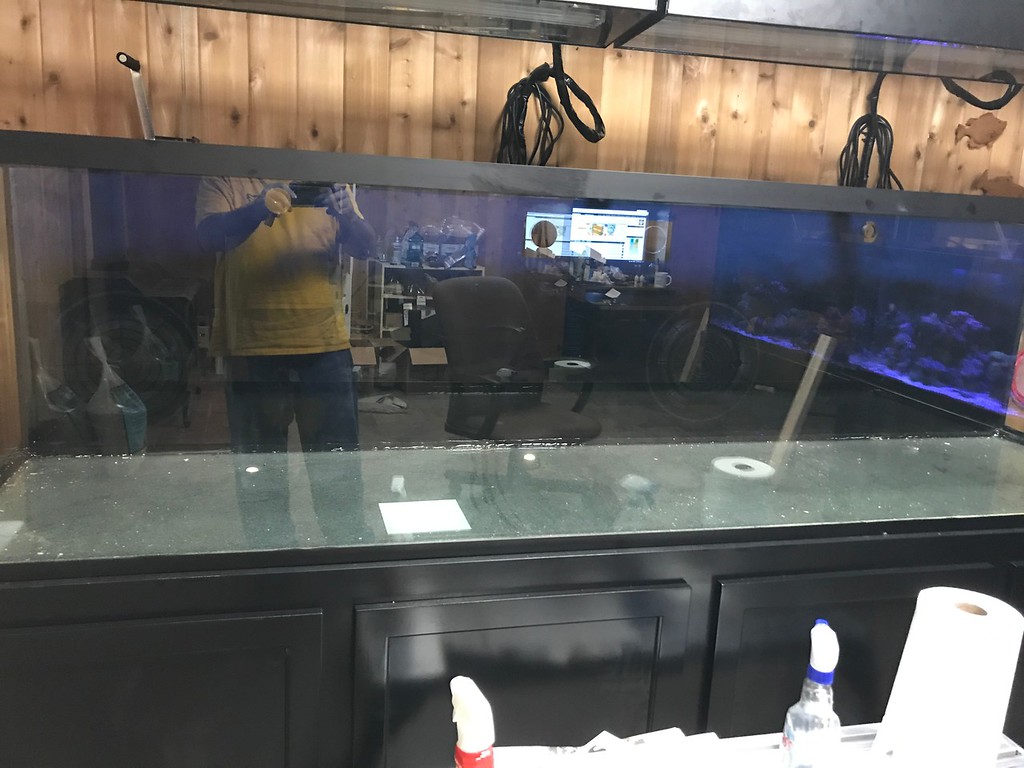 I do what I want!

WVNed said:
It's painted. I did a fade with blue at the top and black at the bottom 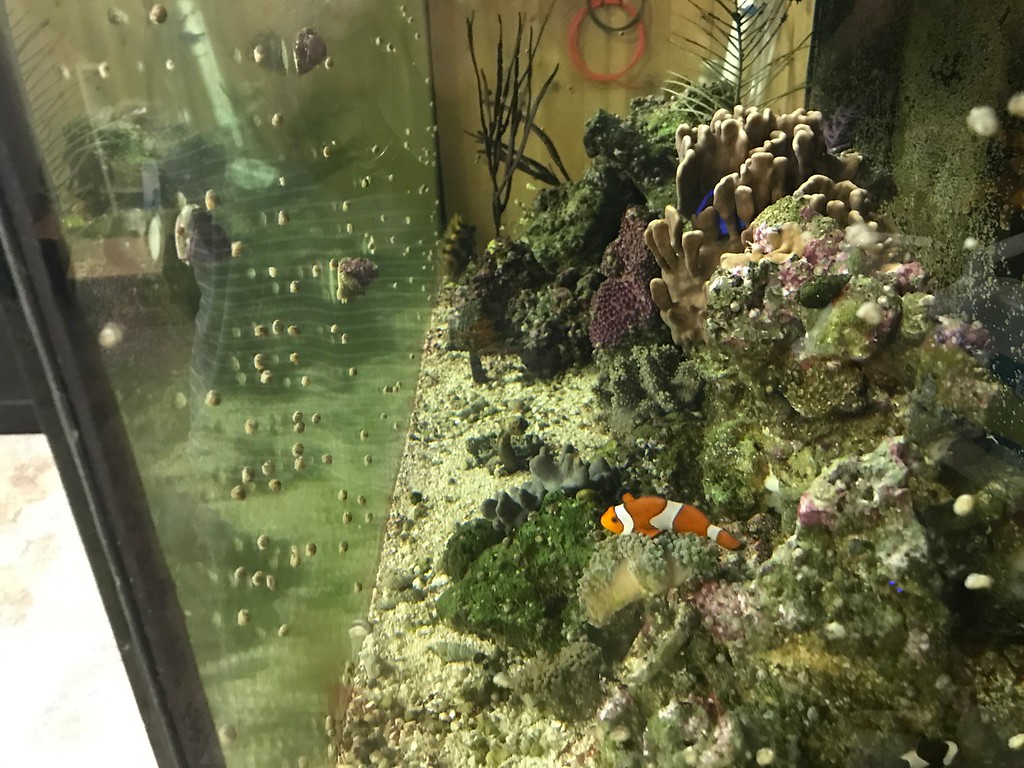 I am going to remove the drywall and put up T-11 siding on the wall and add 2 new electrical circuits in the fish room. The sump will be made out of a 100 gallon stock tank and a 40 gallon one sitting over it. I am going to put a stand pipe in the 40 to control the water height for the skimmer. That way I can adjust it. The return section will be 5 gallon buckets in the stock tank. I think I am going to set up my cube tank next to it as a refugium. It is already drilled and will just drain to the stock tank. I still have my viparspectra lights to put over it. I may build an algae scrubber too. Lots of ideas.
I have to move lots of junk I mean really good stuff we piled in there when we moved in.
Having the shingles was a really miserable experience. It was very painful and has set me back pretty good. It was kind of like a 24 hour a day ice cream headache with an occasional stab through the head with a screwdriver. I still have a dull headache but am somewhat functional again. Yay for antivirals.

Hey Ned I see you and the snails have gotten busy Whats the plan for the over flow?

There are lots of threads on filtration. This is a shot through 4 feet of water and you can clearly see the stuff on the wall beyond the tank. This is with nothing but a skimmer running on the tank.
The lights are off or the snails wouldn't be out. During the day you only see 2 or 3. I don't know where they all hide at but they do. I would guess there are about a 1000 or so and you can see multiple generations by the sizes of them. I have no idea what kind they are.
OP

siggy said:
Hey Ned I see you and the snails have gotten busy Whats the plan for the over flow?
Click to expand...

It's going to have 4 x 1 1/2 inch drains. I decided it would be stupid to not put them in now. I will control the water level in the box with PVC risers stuck in the bulkheads just like I do now with my HOB overflow. I think I am just going to use flex PVC. I think that will allow me to stress the box less. The drains will only be about 3 feet long and go the other side of the wall.
OP

and it's not.
I have been going over in my head how to run a tank when you cant see the DT and the sump at the same time. No floods please.
I have decided to replicate the tank water level in the fish room using a 40 gallon stock tank. The skimmer is also going to sit in this tank with a 100 gallon stock tank under it to drain down into. It will be controlled with standpipes instead of valves. I will put a uniseal in the stock tank with a 2 inch emergency drain to set the maximum level as a last resort.
I now do stupid things at times when I am tired. Need to make this bulletproof. 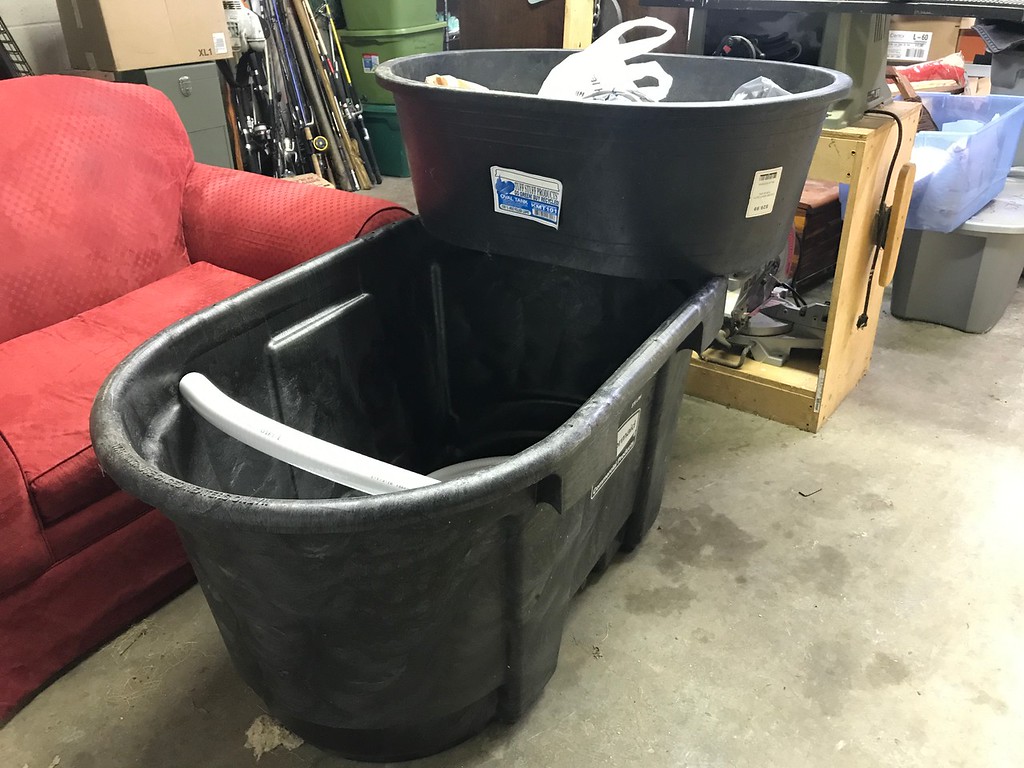 No overflow box. I am going to connect the 2 x 1.5 inch drains straight from the tank through the wall and into the stock tank. I will just use the overflow parts inside the tank.
The biggest if is can make this quiet.
I think I can
I would post a thread but the last one got a single answer of "bump". I have never been afraid to do my own thing though.

Putting the new wiring in. 2 new circuits with 5 duplex outlets each. 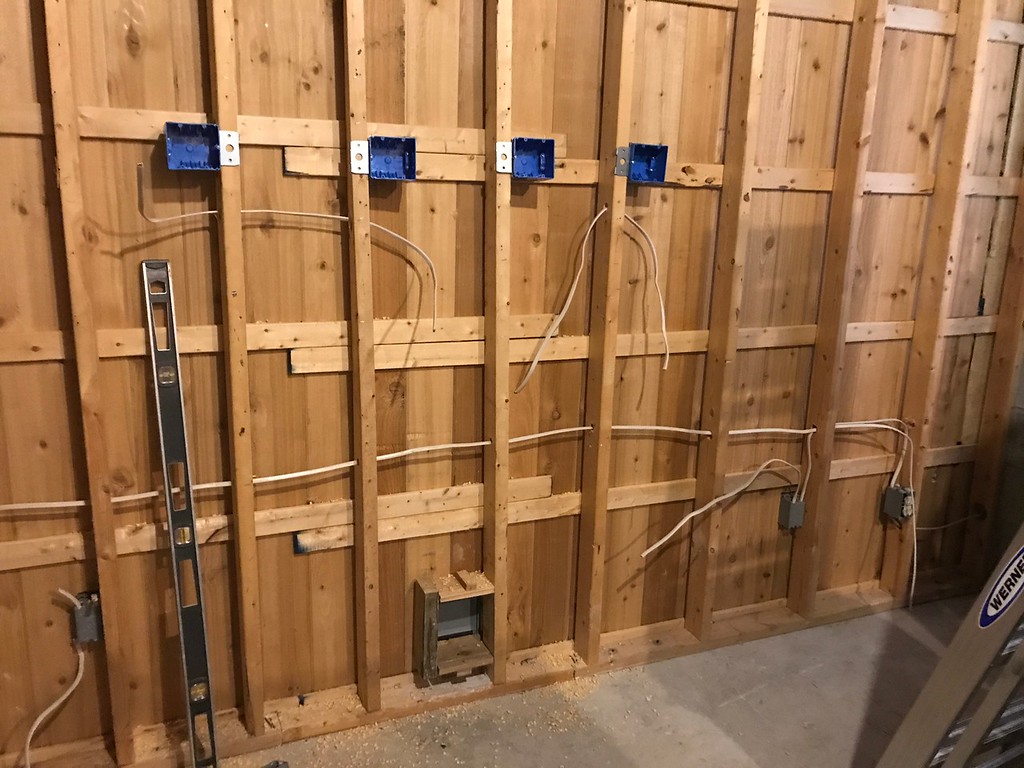 The pump controllers and light ballasts and timers will be in the stand. There will be no wet elements in it. I am not a neat wiring guru like some people on here. 4 cords for outlet strips will leave the stand and go to outlets behind it and I will probably stick the pump controllers to the backs of the doors so I an see them. If I get the Maxspect
Syna-g and some wifi timers I can run it all from my chair.
OP

I may be slow but I am persistent. Slinging sheets of plywood by myself isn't as easy as it used to be. I like the heavier T-11 siding because I can screw stuff to the wall where ever I want. The other 2 walls in this room are block.
I was placing the new wiring into the breaker panel and found some bare spots on the hot legs with the ground wires. Big flash in my face. I didn't even pee myself.
That is all done and buttoned up. There are 2 new 20 amp circuits each with 5 duplex receptacles. That gives me 4 outlets behind the tank and 8 in this room.
1 will have a light and heaters, 2 largish loads, the other will have a light and pumps. There is another circuit in the wall so If I want to plug in my shop vac it wont be on ones with tank stuff. 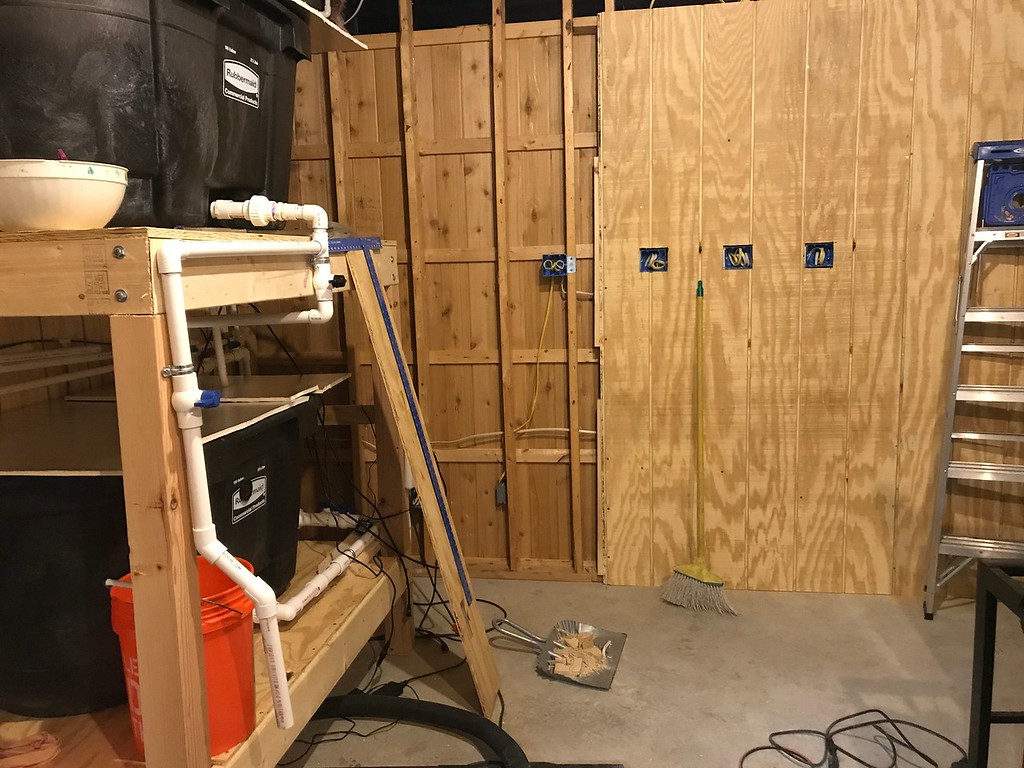 We had a humidity event in the basement where water condensed all over the AC ducting and vents and started to drip. It has happened before in this house because I replaced the water stained ceiling tiles after we moved in. I don't think it had anything to do with the tanks but I cut insulation sheets and covered them. They needed it anyway to keep dirt and dust out.
I think it was due to leaving the doors open so the dogs could wander in and out.
There is a mechanical room on the other side of the wall behind the water change station that is open to all the ceilings on the lower level. I installed a dehumidifier in there and the water dried up. It is reading 45% now so I think that problem is solved.

Where I moved my desk to gives me a view of my 75 through the end. Yesterday I caught myself thinking how nice a 4 foot by 8 foot by 30 inch tank would be. 600 gallons says the math. Then I smacked my face and said stop that.

After bottle feeding Millicat every 2 hours for a week Jeanna has decided it will be her cat named Kit. It's eyes have opened and it is doing well. 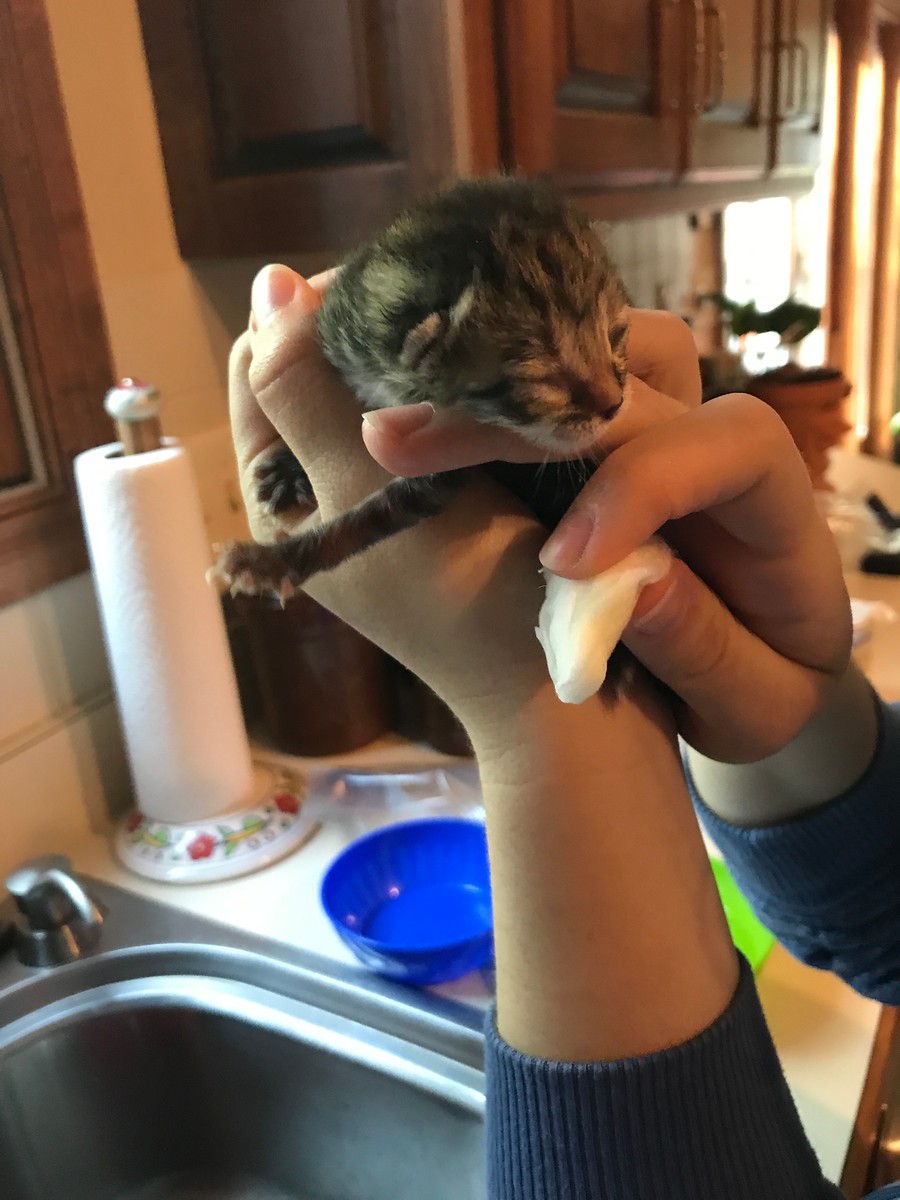 Tank is looking fantastic and I am very jealous of your fish Room. Congrats!

I am feeling better. It is coming along faster now. 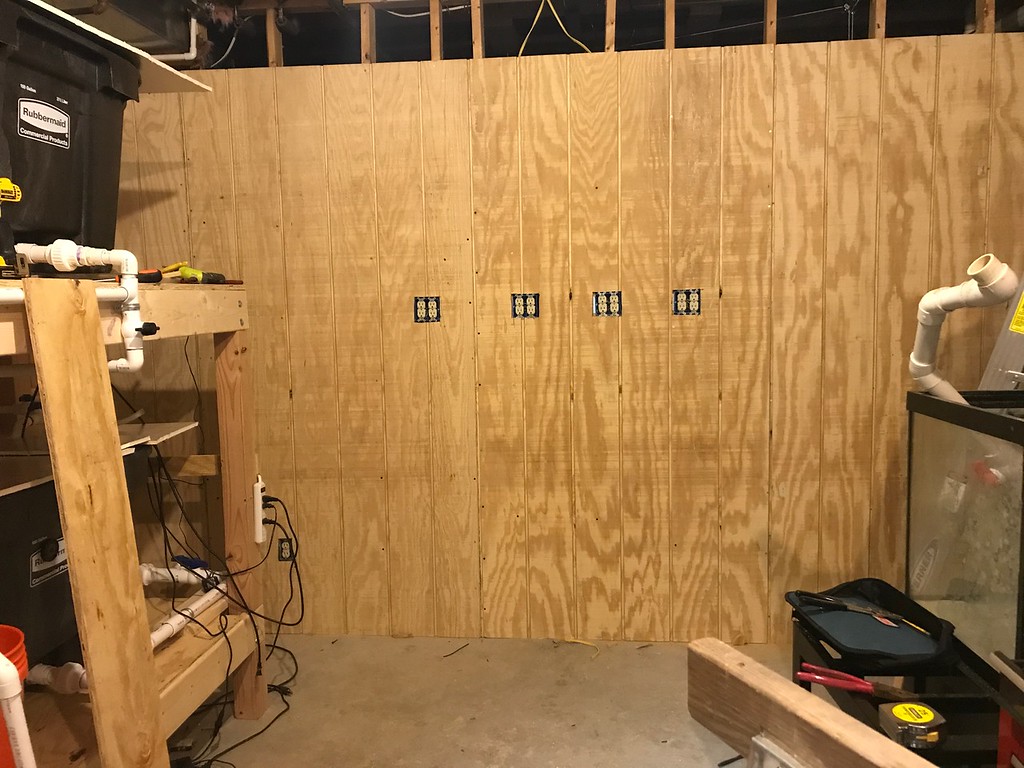 Time to clean up and then do the plumbing. I don't have the outlet covers yet and I have to wire 2 more in the other room behind the tank..
I have to build a "stand" for the sump setup to sit there. The tank on the right is going to be next to it for a refugium.
I still have my Viparspectra lights to use on it. I think I will stick a Brut can in the corner for ATO water. I already have them with holes for a float valve.
I haven't decided if I am going to connect the 75 to this, take it down or use it as a QT. I want the sump out of the stand in any case. I haven't gone to far down that road in my head yet.

In other news
Society6 has cool stuff. I got some more mugs 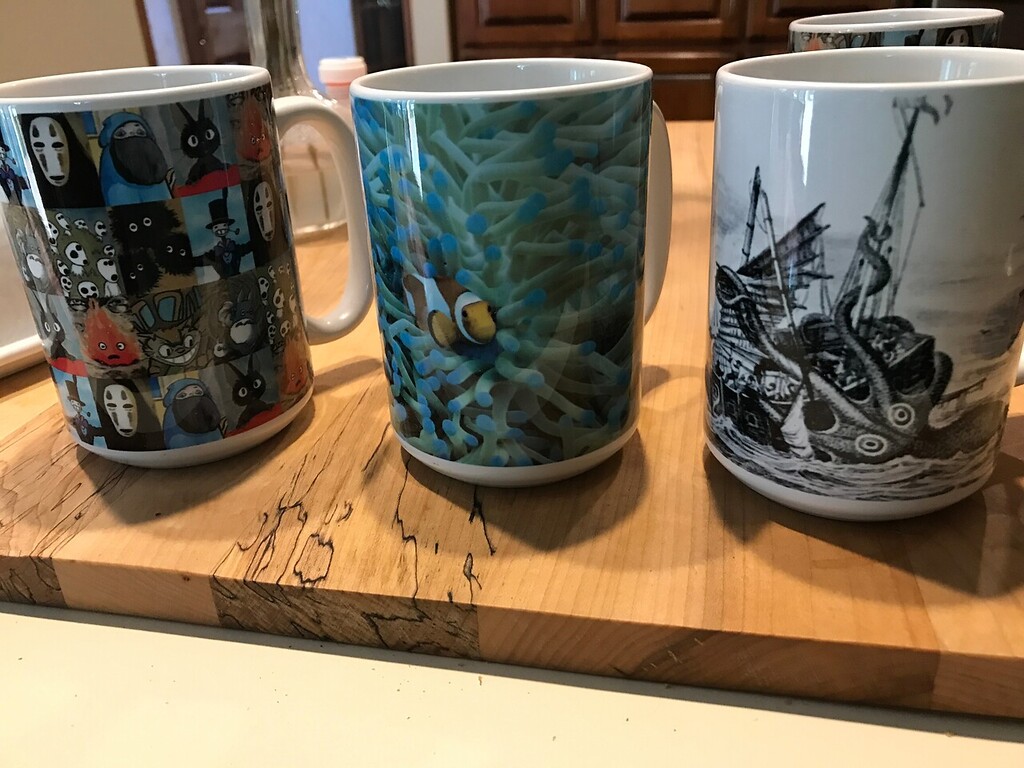 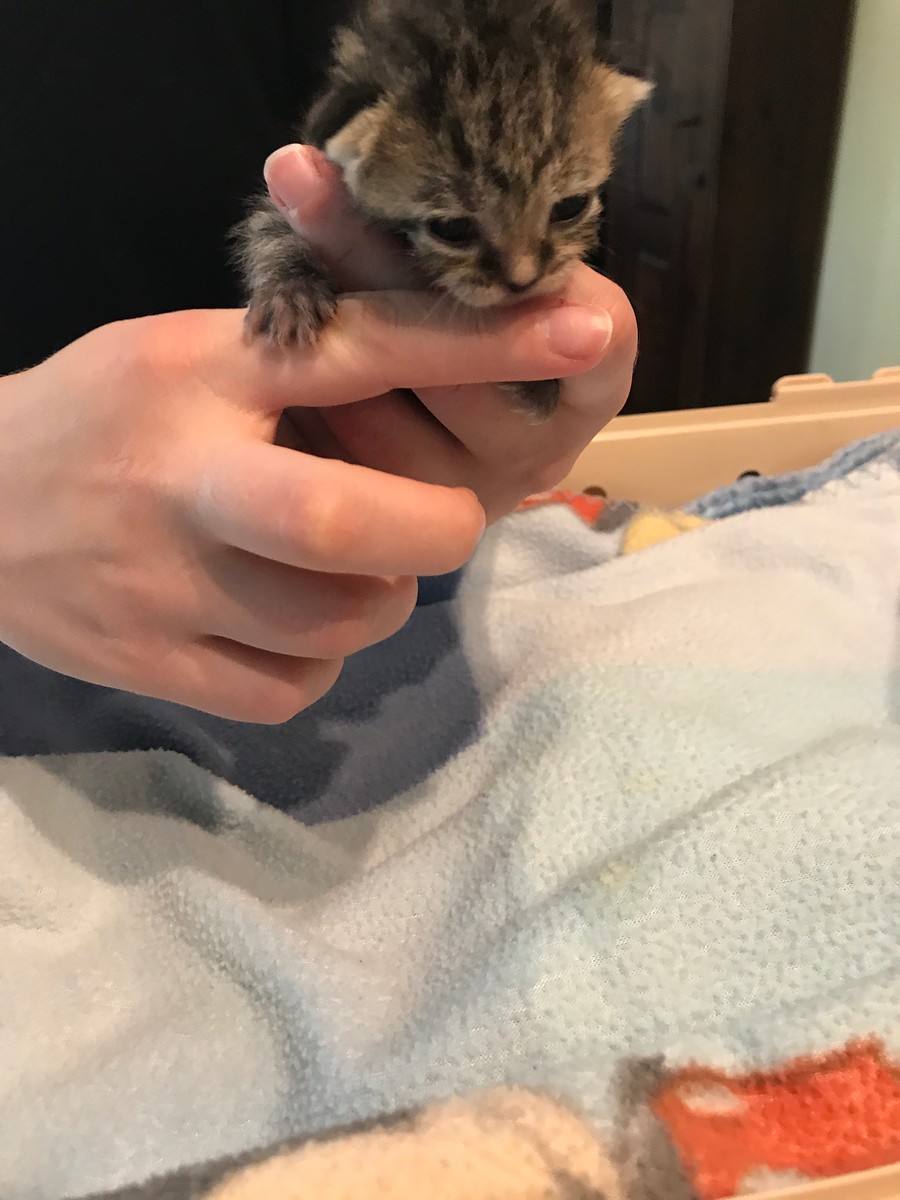 LOL
I am having a good time. Thanks for joining me.

This is the general idea. 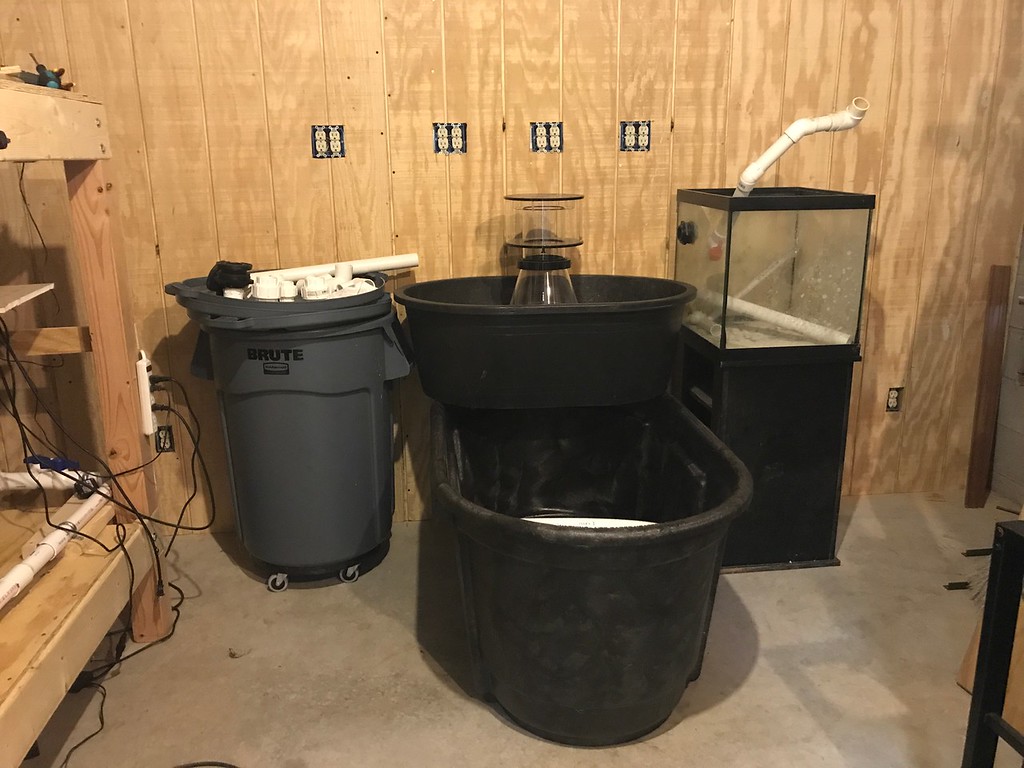