The reefs of Letterkenny are made up of tangs, clowns, gobies, and some pains in the wrasse. This is their story.

I have long been awaiting this build which is my dream build for the current house. The tank is a Waterbox 130.4 with a black stand (likely will wrap this in the color of my wife’s choosing). My goal is ULM and as much automation as I can. I am hoping for a quick cycle using a 12oz bottle of Fritz Turbostart 900 (rated for 400g) and will be using Tropic Marin Reef Pro salt. This will be a mixed reef tank but some predominance on LPS/Euphyllia’s.

Here is a link to my last build thread. Unfortunately, the tank doesn’t look like this now. Life as a public accountant and dead dosing pumps wiped out most of my LPS leaving me with half living acans and one torch coral left. Lost $1,000+ in corals so the only way to recover is to go with a new system with the most automation possible.

First, thanks for the collective advice that has been provided thus far when performing my planning and due diligence. I have taken the plunge and have ordered the parts for my new build of a JBJ 45 flat panel rimless. I will add photos as this build progresses but for now, see below for my...

I currently have two tangs in QT and will have a my clowns and Blenny from my current tank join. Will also be sending over my remaining corals and fire shrimp. I will be plumbing a RODI tube through the wall so that I can have my ATO in the garage (a 25g storage box). Tasks for tank arrival will include building a manifold for the three reactors, getting the RODI plumbing finished. 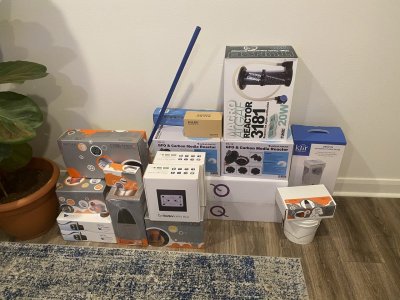 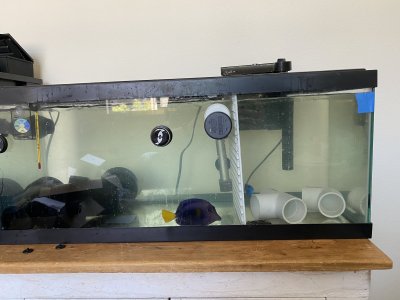 7/10 Update:
Cycle went quick with the 16oz of Fritz Turbostart 900 (2ppm ammonia to zero in a day) and dosed it up again for good measure. I started to move some corals from my old tank which is being neglected to this tank. Waiting for my ESV Bionic 2 part to finish mixing before I set up the DOS but almost finished with the set up. 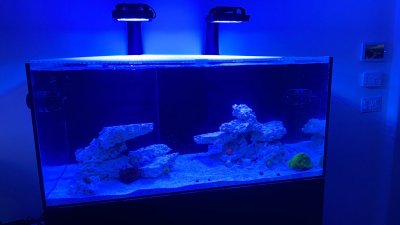 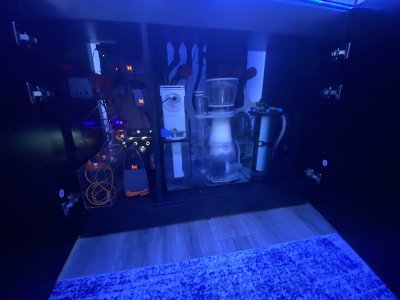 7/20 Update:
Everything is humming along smoothly. I got a camera filter in today so able to take some decent pics. 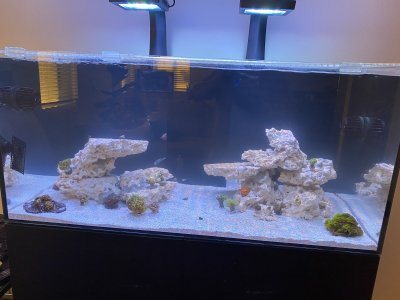 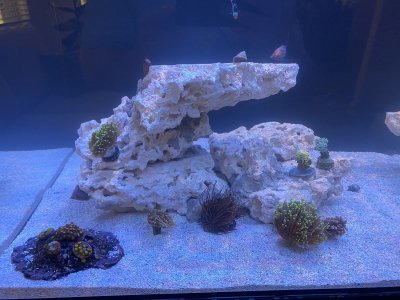 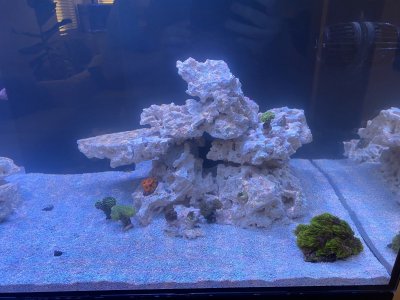 First things first, with the tank coming in soon, thoughts on this scape? Planning on a mix reef, mainly LPS but will try out some SPS. The scape might be a bit high (tops are about 16”, cardboard in back is 24” which I realize I need to trim down by 2” to match tank height now). 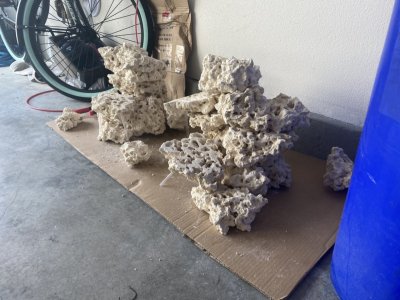 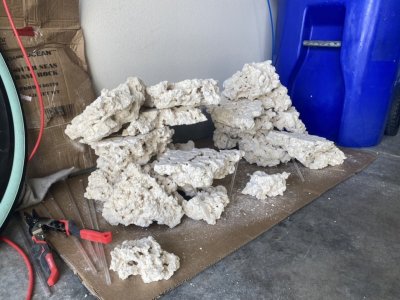 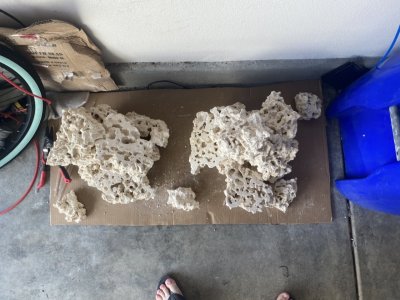 Picking it up today! First project done: plumbing a RODI line from the garage to the living room so I can use a 25g ATO container. Made the whole beneath the cover big enough to add in more later on. 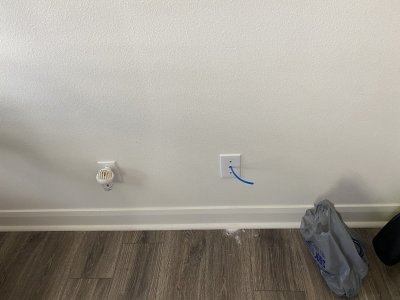 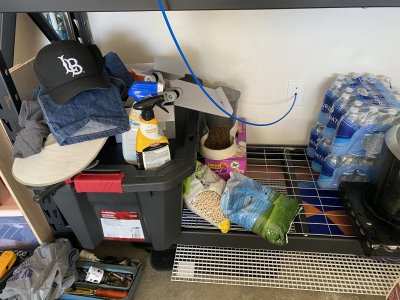 Stand made and tank is up. Controller board in progress. 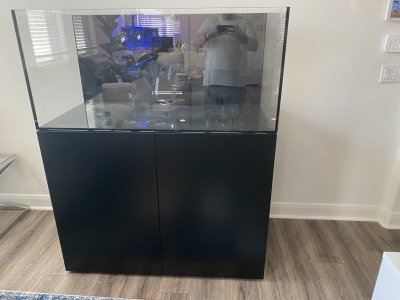 Have most of the salt made and added my aquascape and sand. Still need to adjust the salinity and fill the sump. 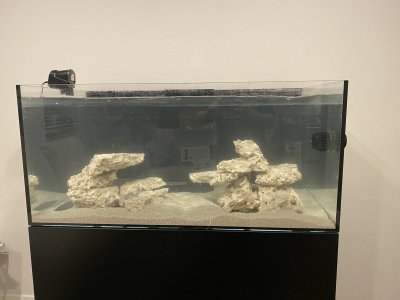 Getting there. Still need to make some more RODI to dilute the batch of what I made (at 1.028). Will need to add in the reactors once I get my mounts in and need to add in a 3/4 to 1/2 barn fitting for the algae reactor. Cable management is coming in as well. 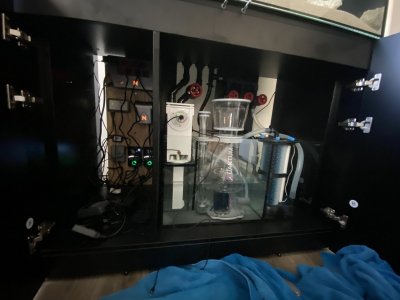 Tank is coming along. Seems to be cycled at this point but going to give it a bit more time before transferring over my live stock. I ordered a Clear View lid and will either make a Red Sea or an egg crate one for the interim. I added the first chaeto to the reactor, which almost immediately decided not to spin any further. Remaining tasks include installing the Trident, Dos, and my X1 dosing pumps to do my two part dosing, drilling my wall plates for my ATO as I forgot to include the pump when I originally wired it, and getting a small set of drawers to use next to the tank to keep some cords hidden and store regularly used materials. 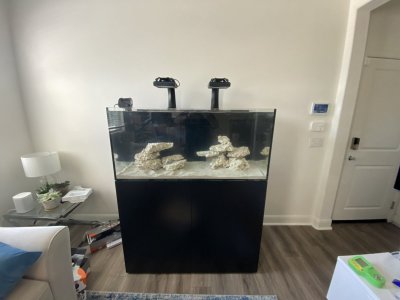 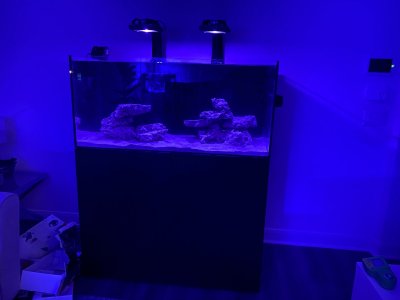 Coming along. Added all the corals from my old tank and will start by adding my Midas Blenny first as the guinea pig before the clowns. Down bottom is almost done after getting my trident set up (still need to calibrate) and my dosing pumps for calc, Alk, and mag. Just need to get my two reactors in there though the GFO may wait. 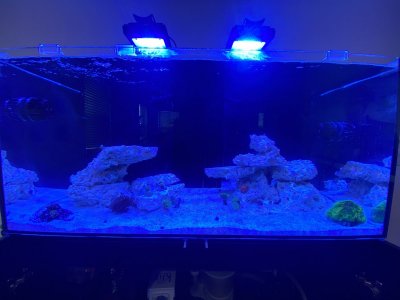 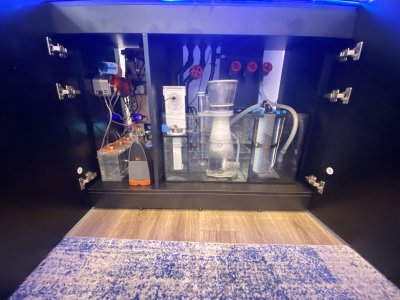 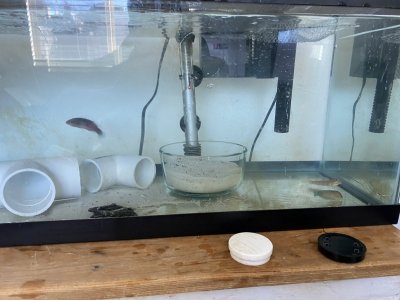 I just picked up a used 130.4. My wife doesn't like the base being white. Did you find a supplier for a wrap for the base?
OP
L

Florida Dan said:
I just picked up a used 130.4. My wife doesn't like the base being white. Did you find a supplier for a wrap for the base?
Click to expand...

Not yet. Looking into 3M and some other places still.
OP
L

Just did a par map. Might need to add a third XR15. 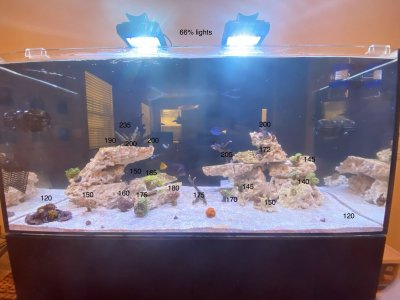 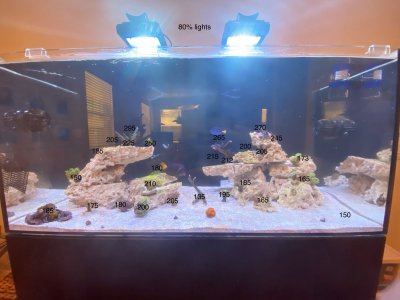 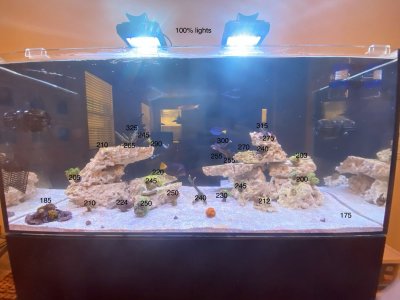 Currently trying out some SPS. So far, some frags doing well and have lost one so far (luckily a lot were freebies from the local reefers). Been struggling with some algae issues particularly on the sand. Ordered a CUC but it was all DOA due to a shipping issue. Looking to order another to help with the cleanup while the diamond goby is in QT. Lost the Melanarus wrasse in QT due to fin rot (sulfraplex didn’t come in time) but the other two are doing well. Hopefully the algae issues will start dying down and if not I’ll have to break out some larger guns. 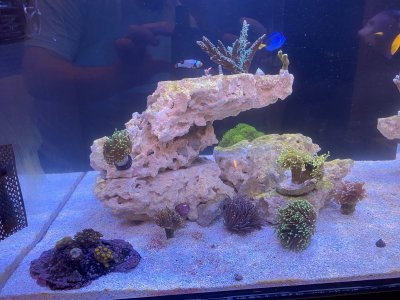 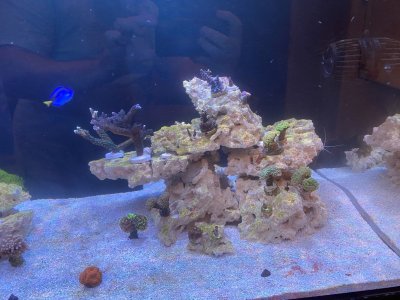