How did that happen.......there is a 260 gallon aquarium in our walkout basement family room now......”the dipper”

Jeto2004 said:
Found some time to set up AWC from garage saltwater storage tank to DOS into sump return chamber and from first sump chamber to DOS to drain line. I calibrated the DOS with out the run initially. Currently its running for a couple of days at it seems to work. Maybe I’m just imagine it but it seems that the water level in the return chamber is rising very slowly and the ATO has not kicked in during the last 30+ hours - will have to watch out. Starting to think that the calibration I have done with out the RO/DI tubing run was not ideal and will have to redo it with the tubing in place. 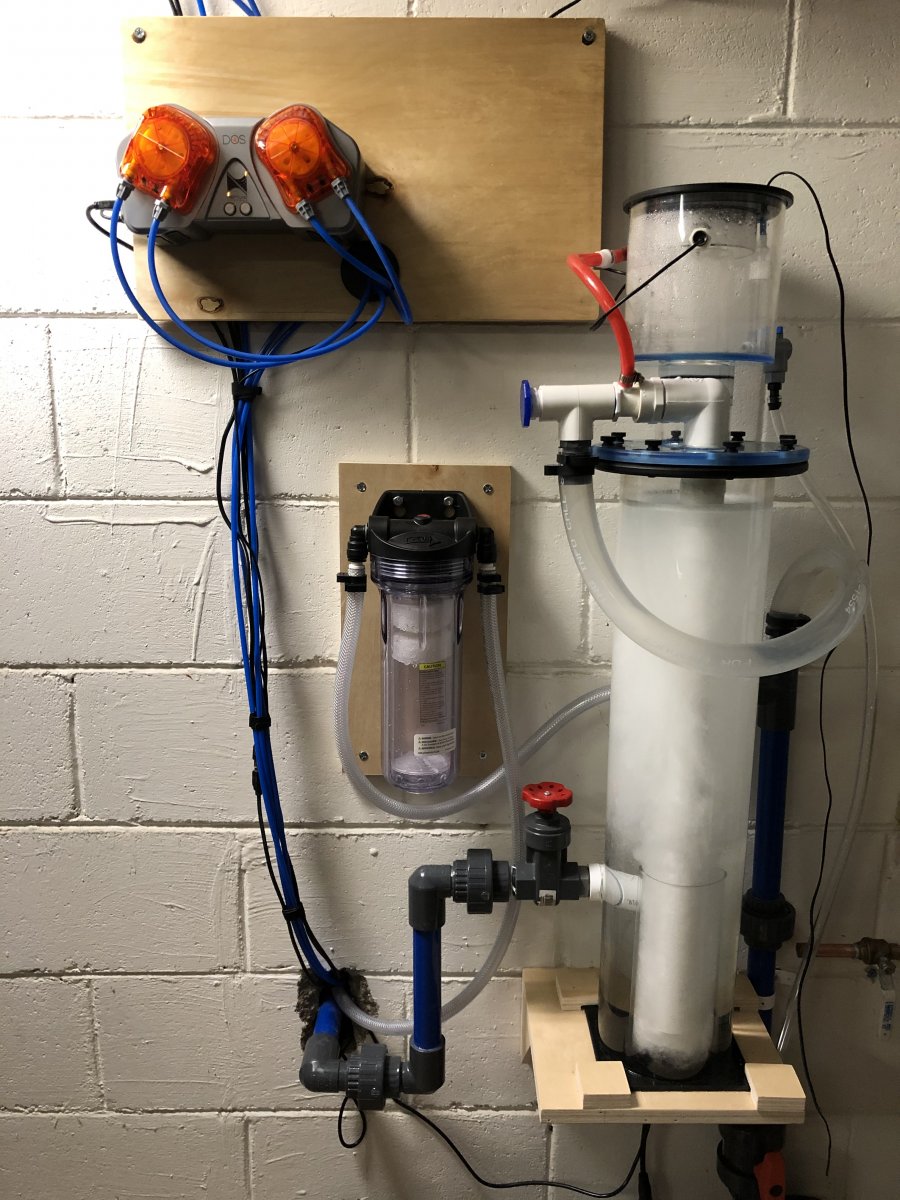 Also installed some level sensors in the skimmer cup. First I just wanted to install a float switch. However the float switch stem was not long enough to go past the lid return ring (what ever the term is for the foam breaker on the lid) so irrationally I drilled the skimmer cup to install an optical sensor, but that makes emptying the cup difficult. So after thinking about it I come up with a solution by extended the stem. I’m glued some RO/DI tubing the the stem now it goes past the foam breaker. Now I have two sensors in the cup. A little overkill. I think I will remove the optical sensor and use the drilled hole for feeding the AWC water into the cup and drain the cup into my AC condensing drain. Kind of an auto cleaning set up. 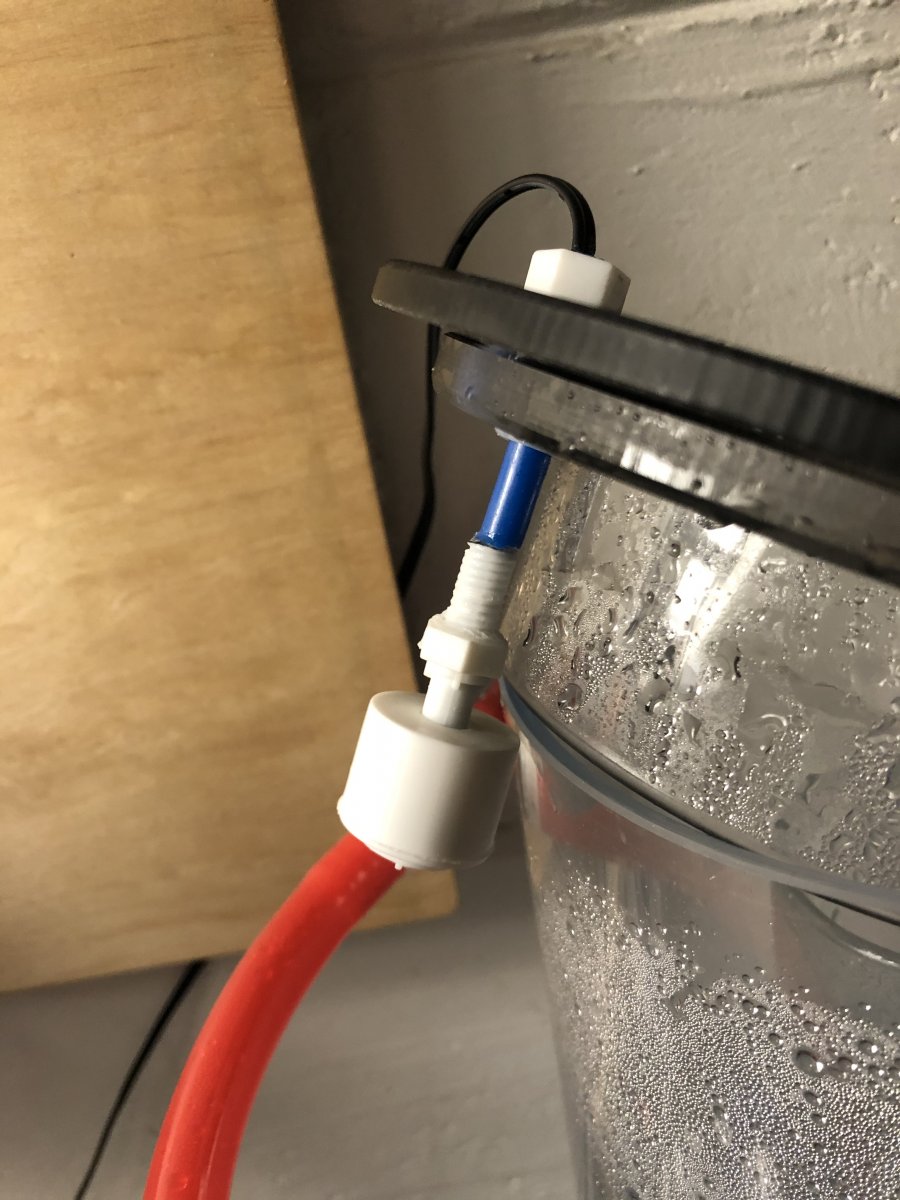 I programmed the Apex to reduce the skimmer pump speed to 40% speed if the switches are triggered.
Click to expand...

Really loving the build... Fantastic job with the stand and canopy. Wish I would have had half your skills for woodwork, I might have attempted it myself. In regards to the DOS awc, you have to have the inlet side installed at all times for calibrations. The longer the hose, the more pressure will be required to pull the water. I run my calibrations at both outlets to make sure it's right.
OP

Dsnakes said:
I kept a trio of Royal Grammas in my 125g. They did extremely well together. I’m sure it’s hit or miss though as I have seen stories that didn’t go as well.

I say it’s worth a shot though. Amazing little streaks of color
Click to expand...

Think I will give it a shoot. What I read thus far is to find a juvenile group of fish that have been kept together all the time. Guess that will be the hard part.
Last edited: Nov 3, 2019
OP

Thank you! Still more to get done, but it is nice to have some fish life in the DT.
OP

Cuong said:
Really loving the build... Fantastic job with the stand and canopy. Wish I would have had half your skills for woodwork, I might have attempted it myself. In regards to the DOS awc, you have to have the inlet side installed at all times for calibrations. The longer the hose, the more pressure will be required to pull the water. I run my calibrations at both outlets to make sure it's right.
Click to expand...

Thank you, I’m a proponent of learning by doing. That means lots of mistakes along the way. But you should give it a try and you will be surprised how it will turn out.

AWC: came to the same conclusion. However, discovered an other problem - with the long run for the saltwater in the RO tubing doesn’t fit good enough and will pull air. There are other solutions described I will try (e.g. 3/8OD by 1/4NPTF Female Adapter).
Last edited: Nov 3, 2019

After 2 1/2 month cycling the time have come to turn on the lights on a full time schedule. Hoped I would have the upper canopy doors done, but sometimes life gets to busy to finish hobby stuff, but started to mill the wood to dimension.
Still have to figure what kind of light profile I want to run. Not a super big fan of the all blue all AB+ profile, would prefer something more white or blue in the morning and an hour before night ramp down. If anybody have a good profile or suggestions for a mixed reef please let me know!
OP

After cleaning out and disinfect the QT tank I rearranged the sump. Moved two export bricks to the skimmer section and one in the media chamber. That freed up the fuge chamber for some Chaeto I got from the LFS. The little Zeitlight is now on schedule too. Hope my currently minimally stocked tank will support the growth. 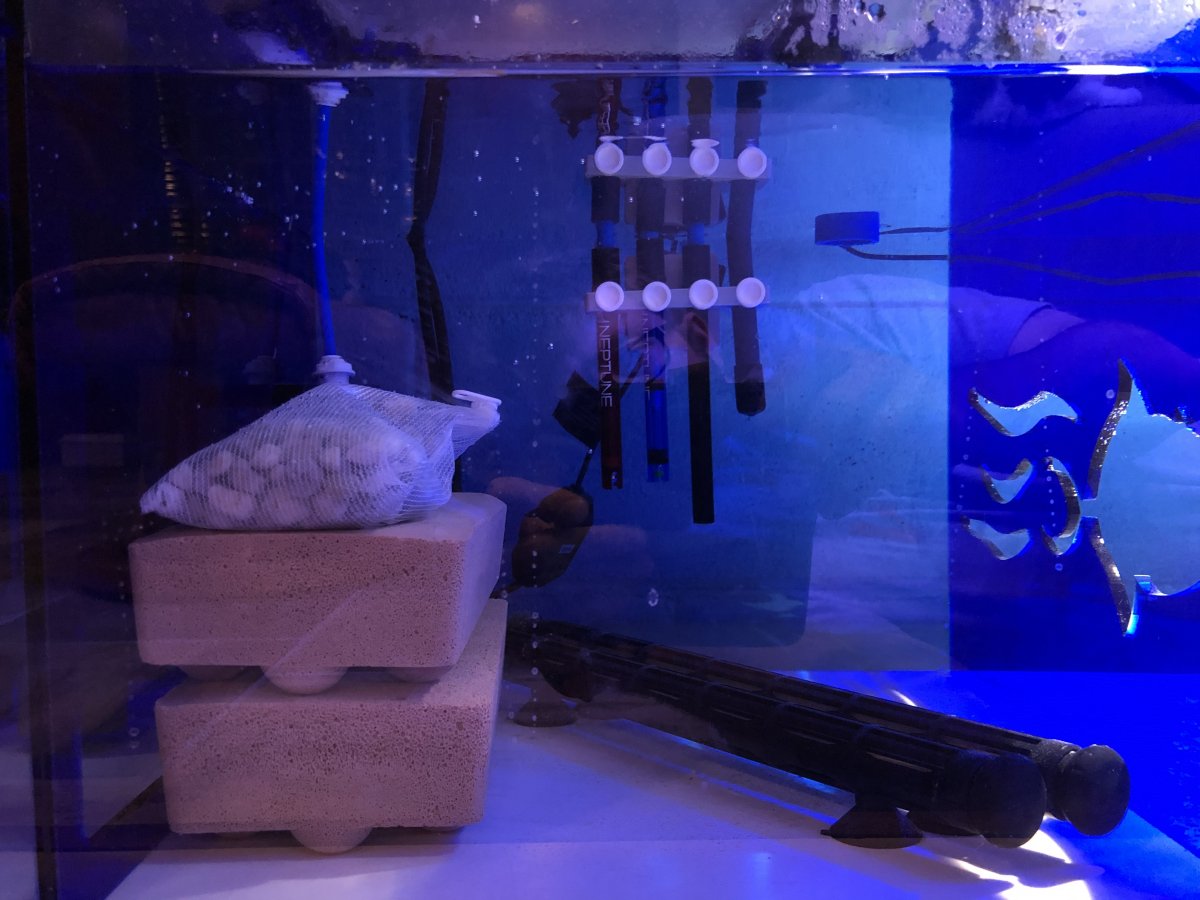 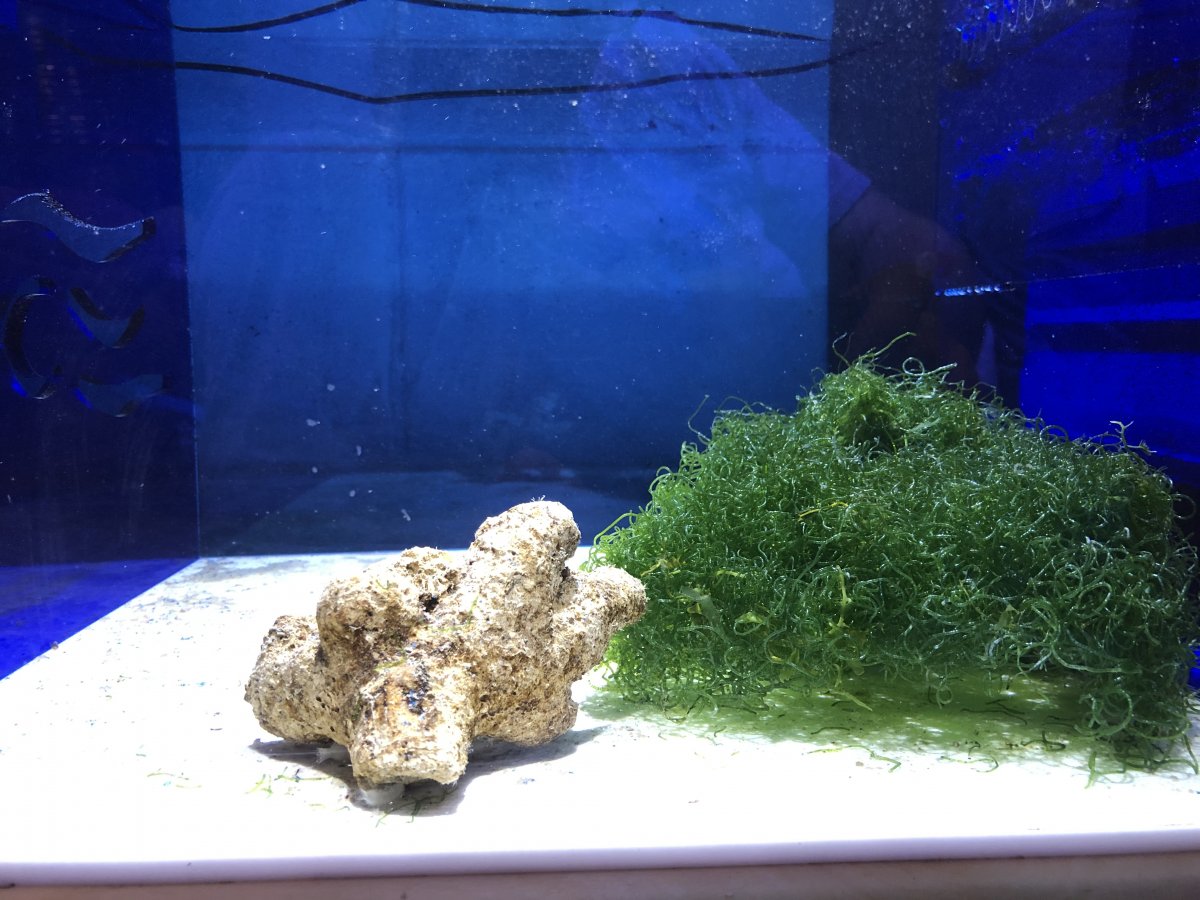 Was disappointed that the adptors I ordered didn’t fit on the DOS, will try to use straight RO tubing again with more tided compression nuts, and turned AWC back on after calibrating pumps with all RO tubing in place.
Last edited: Nov 5, 2019
OP

After running the AWC over night the level in the return chamber went up and the ATO didn’t kick in at all. I thought I would lose my mind.

It‘s kind of messed up and not done well by Neptune. If you set up AWC through the task manager as Neptune suggest you have to plumb in the tubing in reversed (out is in and in is out). With that in place you can not use the DOS buttons to primer or do calibration of the pump that is used for pulling water out of the sump. It totally confused me and I reserved the plumbing again. While I could prime and calibrate the pump with all the tubing in place, once I turned the AWC on the pump runs in the reverse direction and didn’t pull any water out of the tank resulting in increased water levels in the return chamber.

After reading through old threats it was an easy fix by changing the pump direction from remove to add in the change interval submenu. Now it seems to work and hope that this will solve my issue I had the last week with AWC not working correctly.
OP

Got a used PM1 Modul for additional temp probe and pH probe. I will use the additional temp probe to control the canopy fan. My longterm goal is using the additional pH probe to monitor an calcium reactor, but have to learn more first what is better dosing or CaRx or a combination of both.
Also picked up a breakout box from avast to hook up the float sensor in the skimmer collection cup, I’m sure I will find other sensors I can hook up to it. The control board is getting full already..... 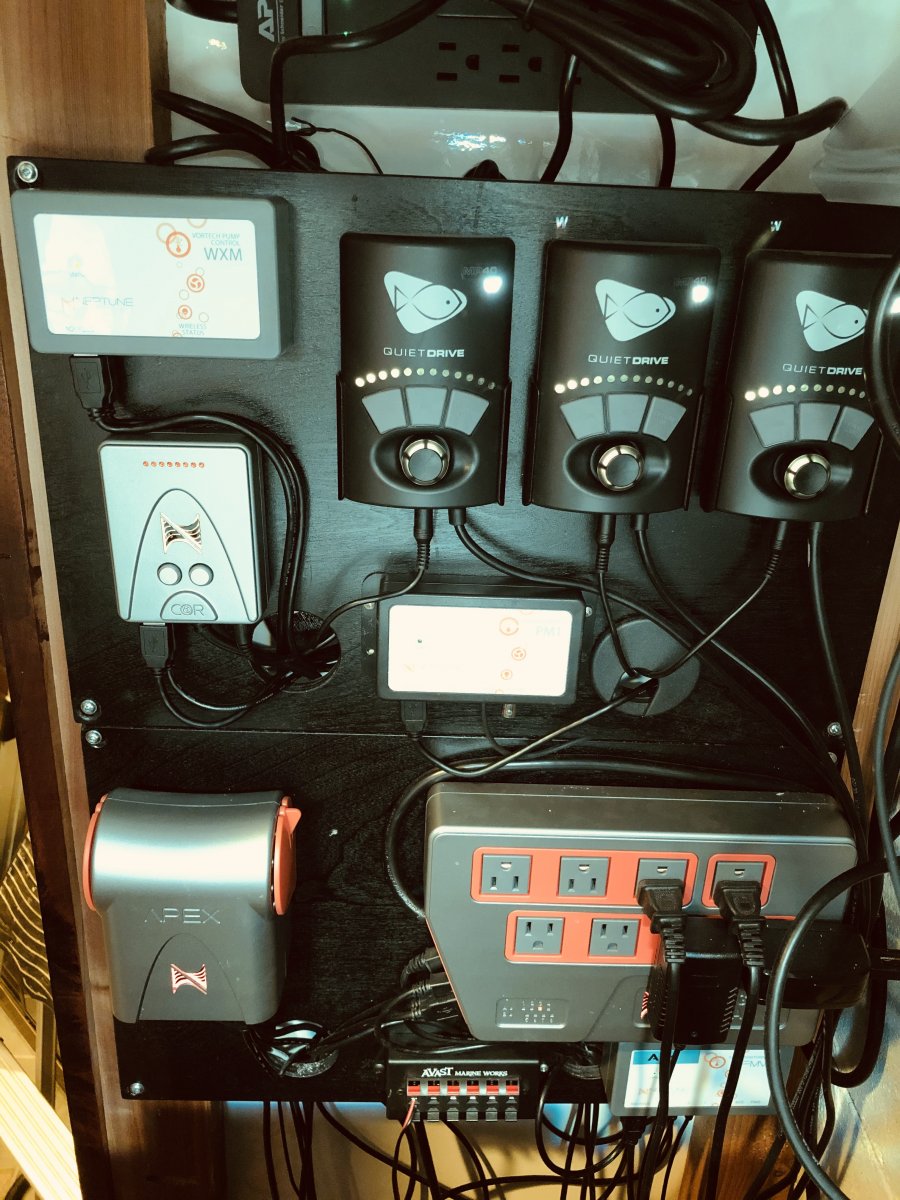 During the day I was wondering if I should post the question how long does it take that algae will show up after turning on the light. This evening I noticed these spots showing up over the rock and sand bed. Wondering if this will be the initial diatom bloom or something else.....excited what ever it will be!! 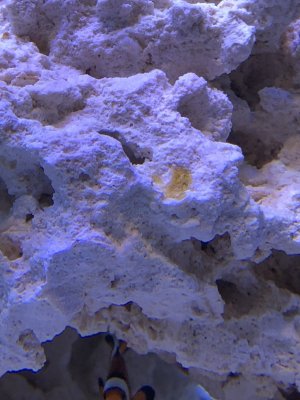 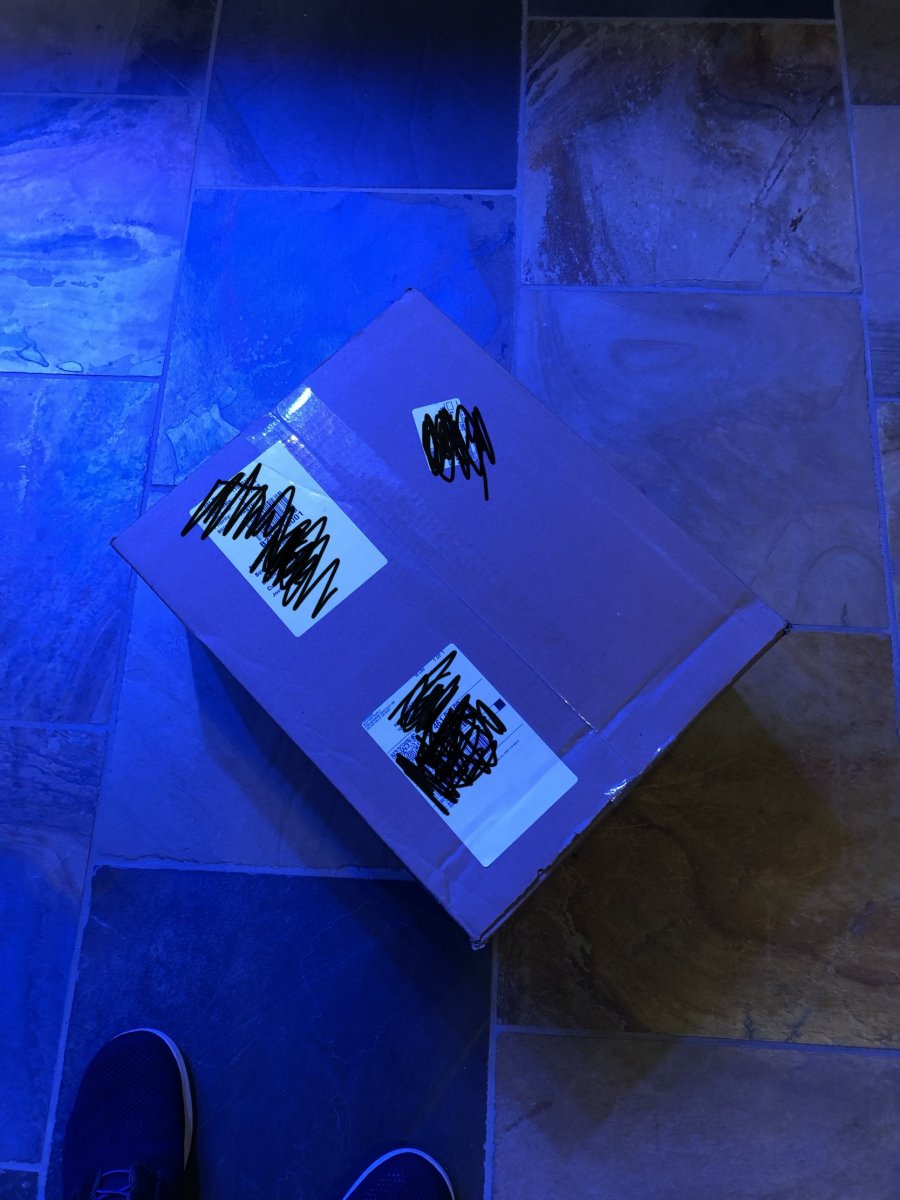 Couldn’t resist and ordered this one while available at BRS: 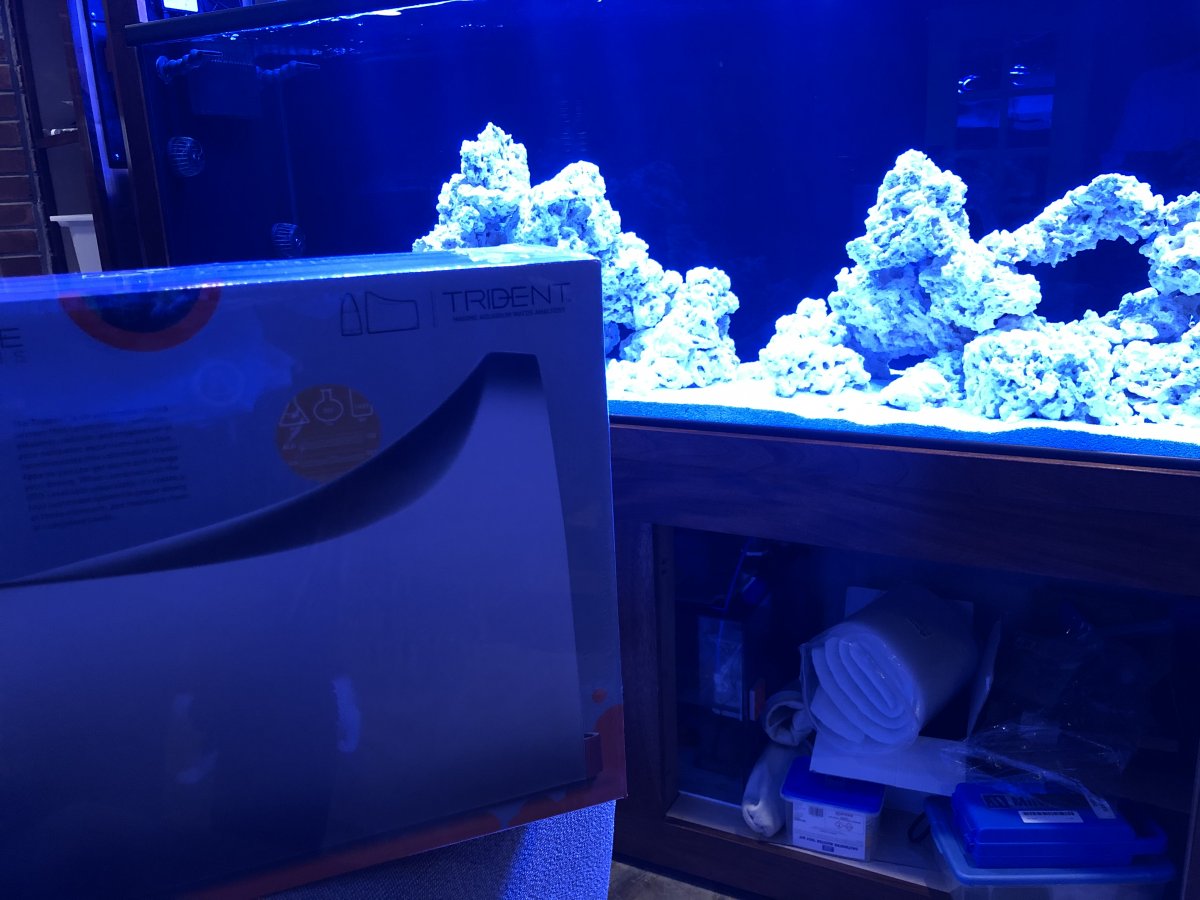 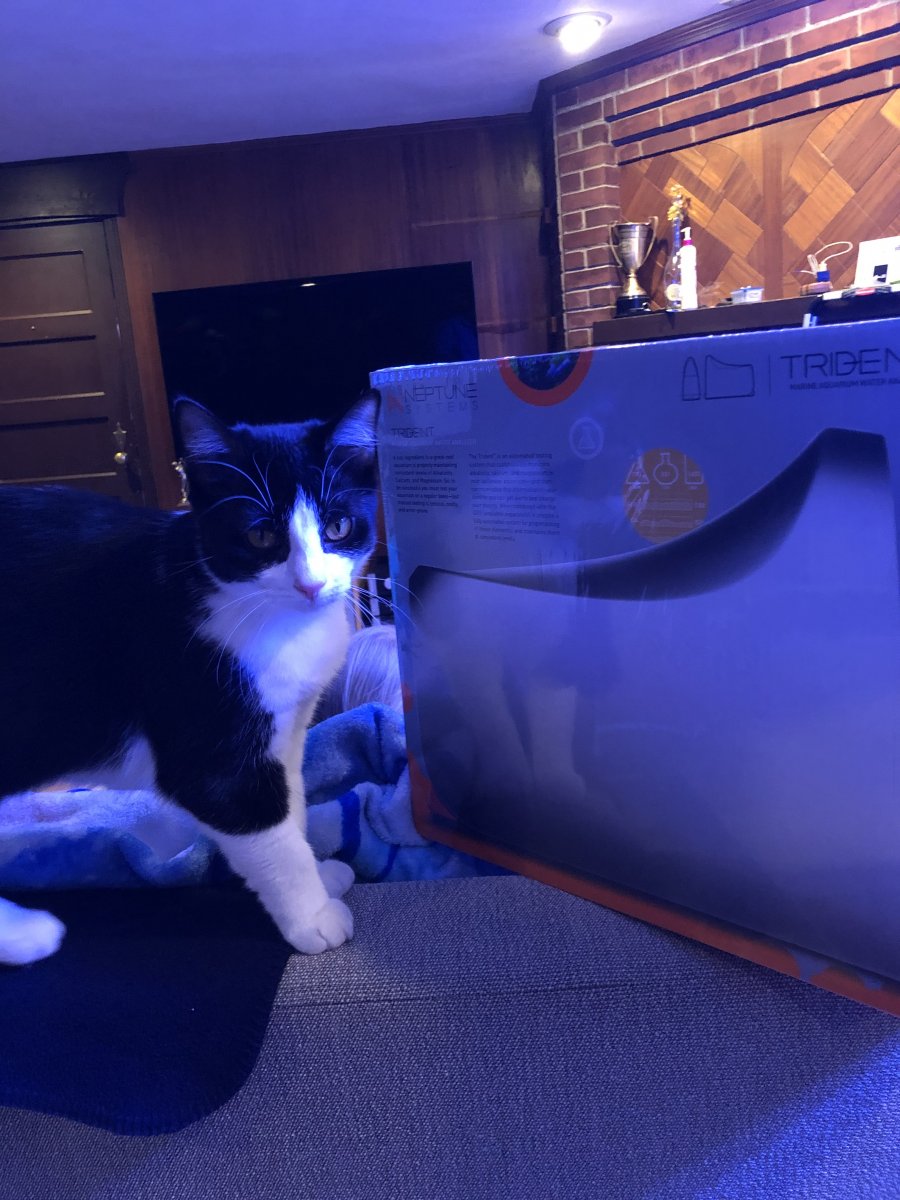 Thank you for the kind words, can’t wait to populate the tank more but have to remind myself - patients patients take you time and enjoy the little things that happen right now......
OP

Got the trident set up. Had to think about were to put it. My first thought was utility room, but finding a good spot was difficult. In particular after I realized that you have only 5ft of tubing to work with. So I made a little shelf in the plumbing and control panel cabinet left to the aquarium. Setting up was an easy and simple process. However the initial setup sequence took quite a while longer than I thought. No it is on a 4 test a day schedule. In a week or so I will do a calibration. 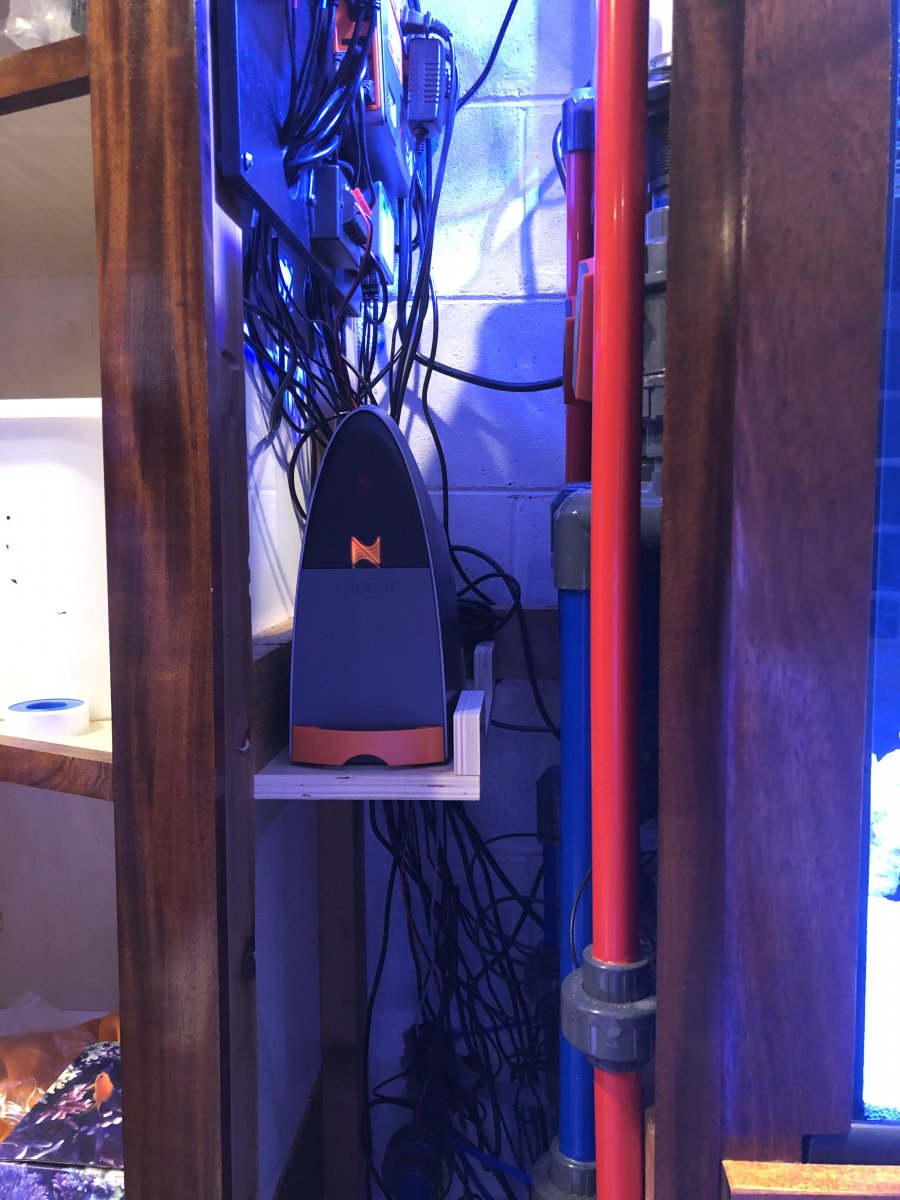 Pardon the wire mess, still haven’t gotten around to wrangle with them. Considering ordering some of the network cable managment channels that I have seen people using. 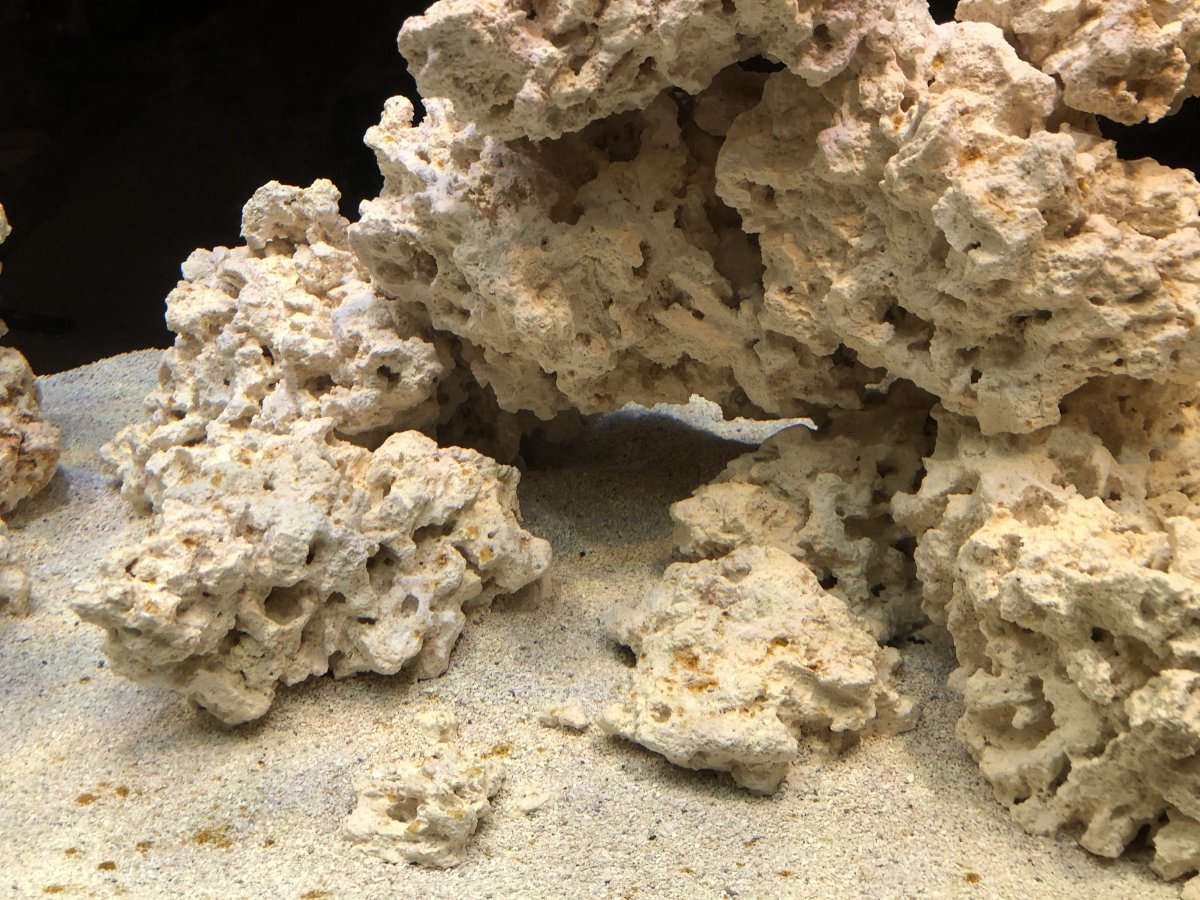 Guess I arrived successfully at the uglies..... not only diatoms but also bright green stuff showing up....fine with me..... 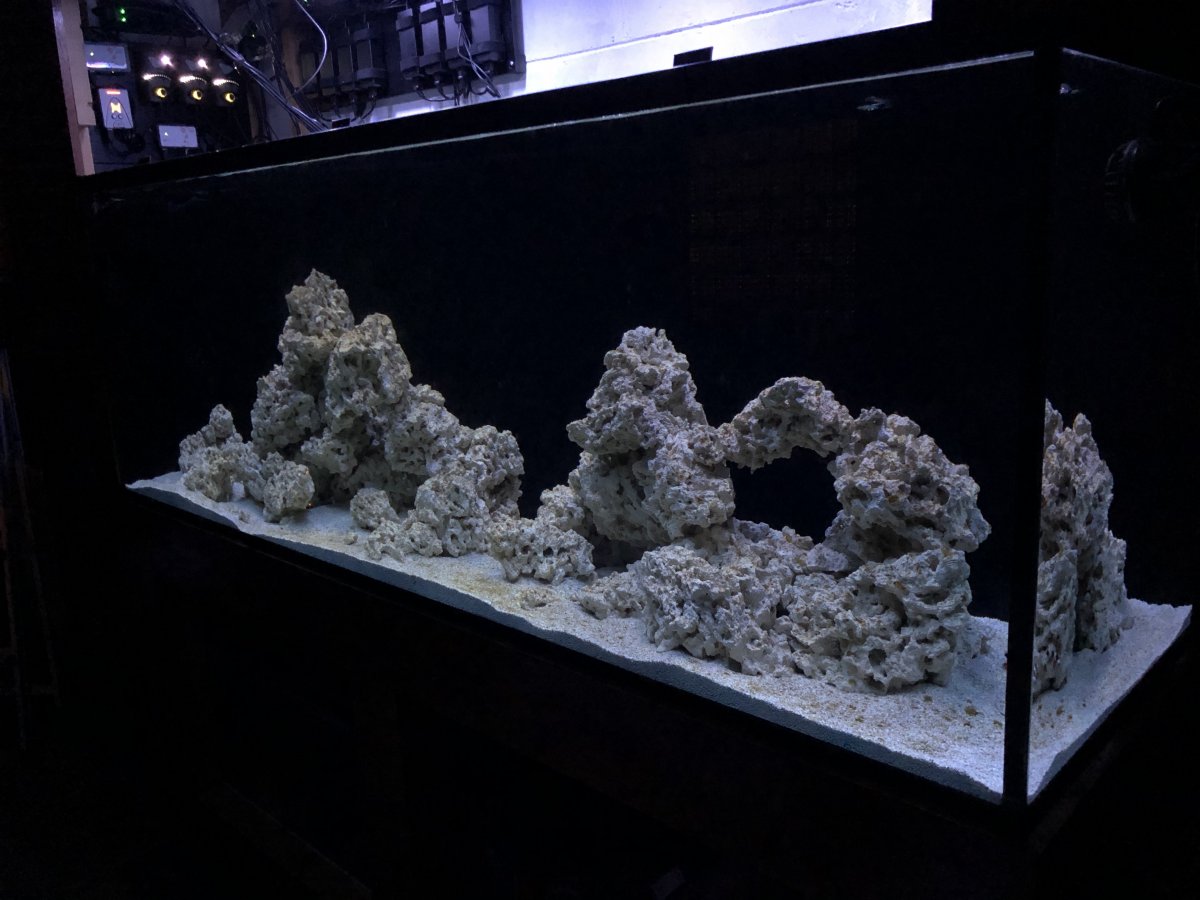 Even some more complex algae..... 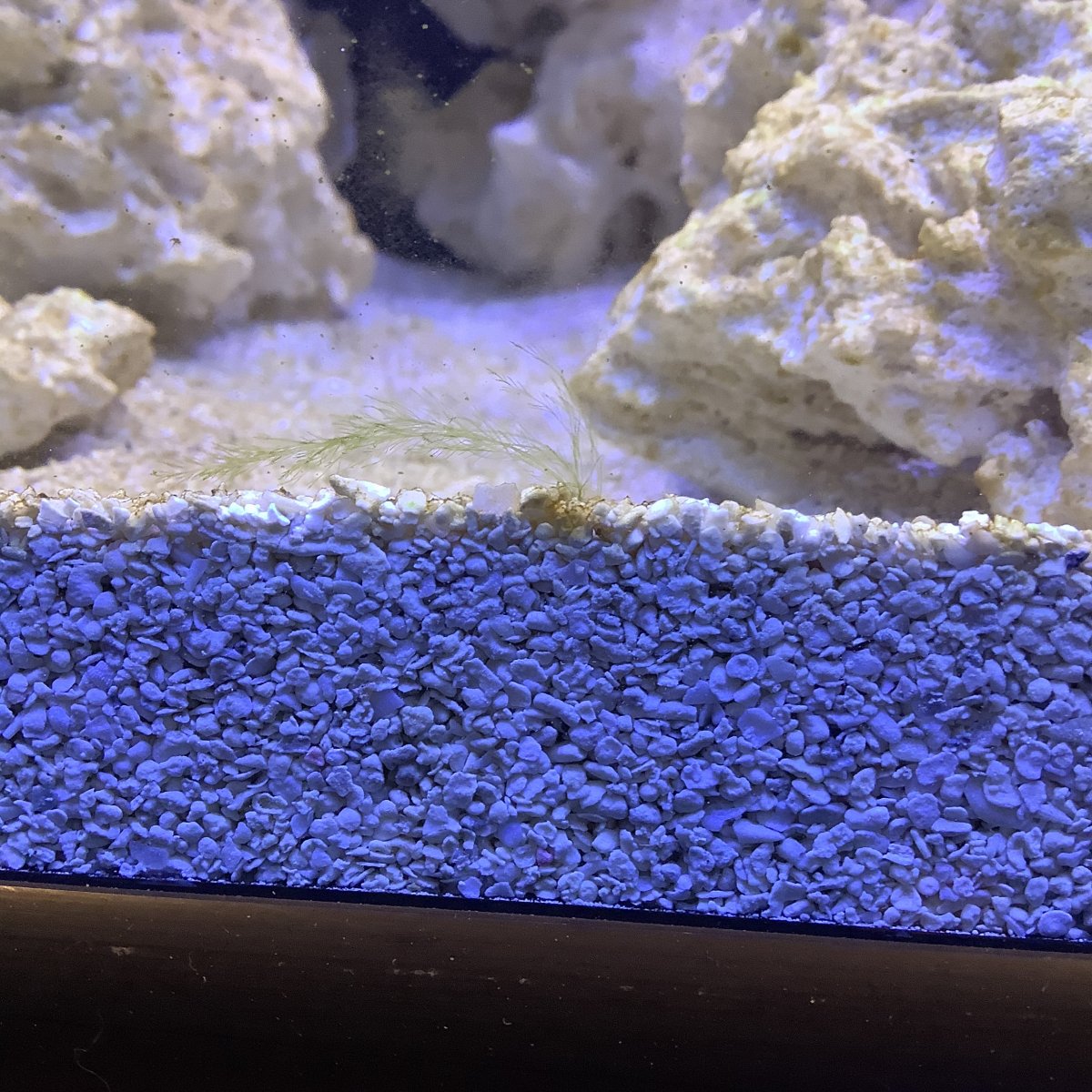 Nice to notice that a healthy pod population is developing.... 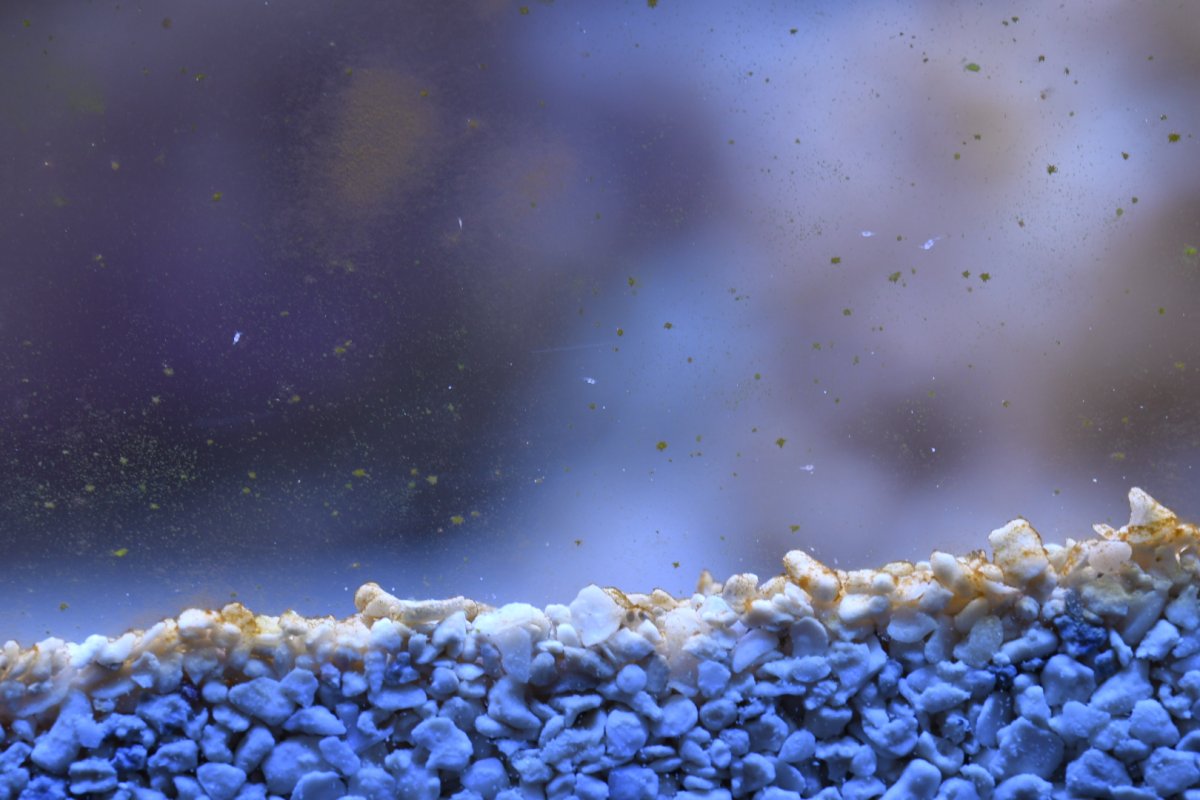 Very cool! And a great read! We want to upgrade our 75 to a 200-300 in our basement in a couple years when the kids are off to college, reading this makes me want to do it now!
OP

LovesDogs_CatsRokay said:
Very cool! And a great read! We want to upgrade our 75 to a 200-300 in our basement in a couple years when the kids are off to college, reading this makes me want to do it now!
Click to expand...

Thank you! Yeah completely understand. Once I was starting browsing through build threats it resulted in day dreaming how to turn the “playroom” into one large dive in tank.....
OP

CUC arrived today. Luckily the temps today were a little milder than what we had at the beging of the week. Was surprised to see a heating pack in the shipment, it was already used up. Acclimated the bags per instruction and added them to the tank. Saw instant movement. Wondering how long it will take for the lot to disperse.... 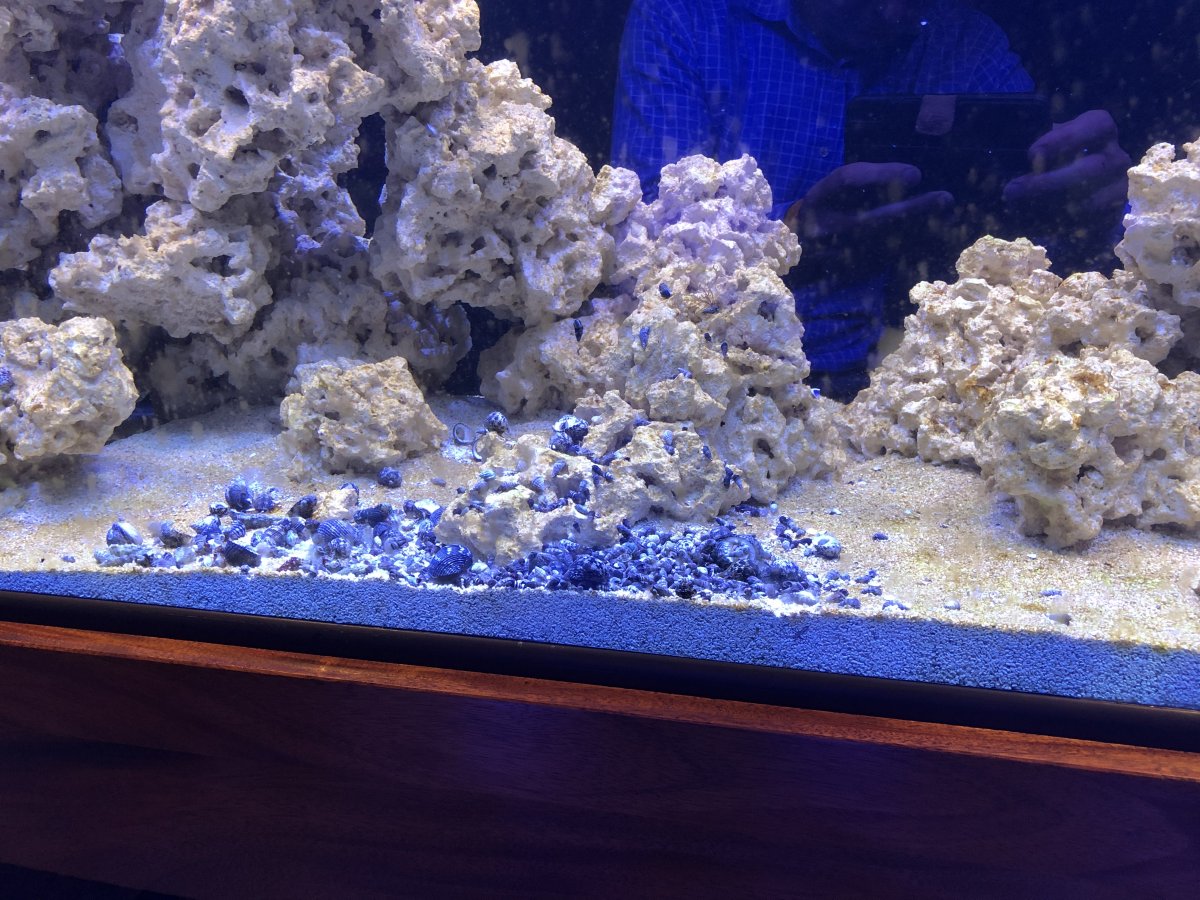 Seems like a lot of snails and didn’t even order to recommended tank size....