Hey Friends! I wanted to start a build thread (even though it's been built, moved, rebuilt, and is currently being refreshed lol). Hoping to get some good feedback and share some insight with new builders along the way!

A bit of background...

I got into saltwater fish originally with a 20 gallon freshwater conversion tank. The plan was to keep some basic clownfish, live rock, and maybe a few pieces of cheap and easy coral just for fun. The first year was a struggle, but after about a year or so of not really keeping anything well, it suddenly started to work. A few years later, I knew I wanted to upgrade to something larger and more stable, and my intent was to leap straight to the 200 gallon tanks when I purchased my first house. Since that was delayed (thank you Florida market), I bought a 75g on sale and started my first larger tank. The initial build was seeded with the smaller 20's setup to jumpstart the process as well as a separate 10g I'd set up testing a completely different concept. Almost 6 months later, I bought a house, broke the just-settling-in 75g down, and moved. It's been here just over one year!

Stand: Custom.
I knew I wanted to build my own stand and matching hood, especially given the cost of buying anything pretty - and wood - that was new. I added a photo below from the build in the final stage of staining. 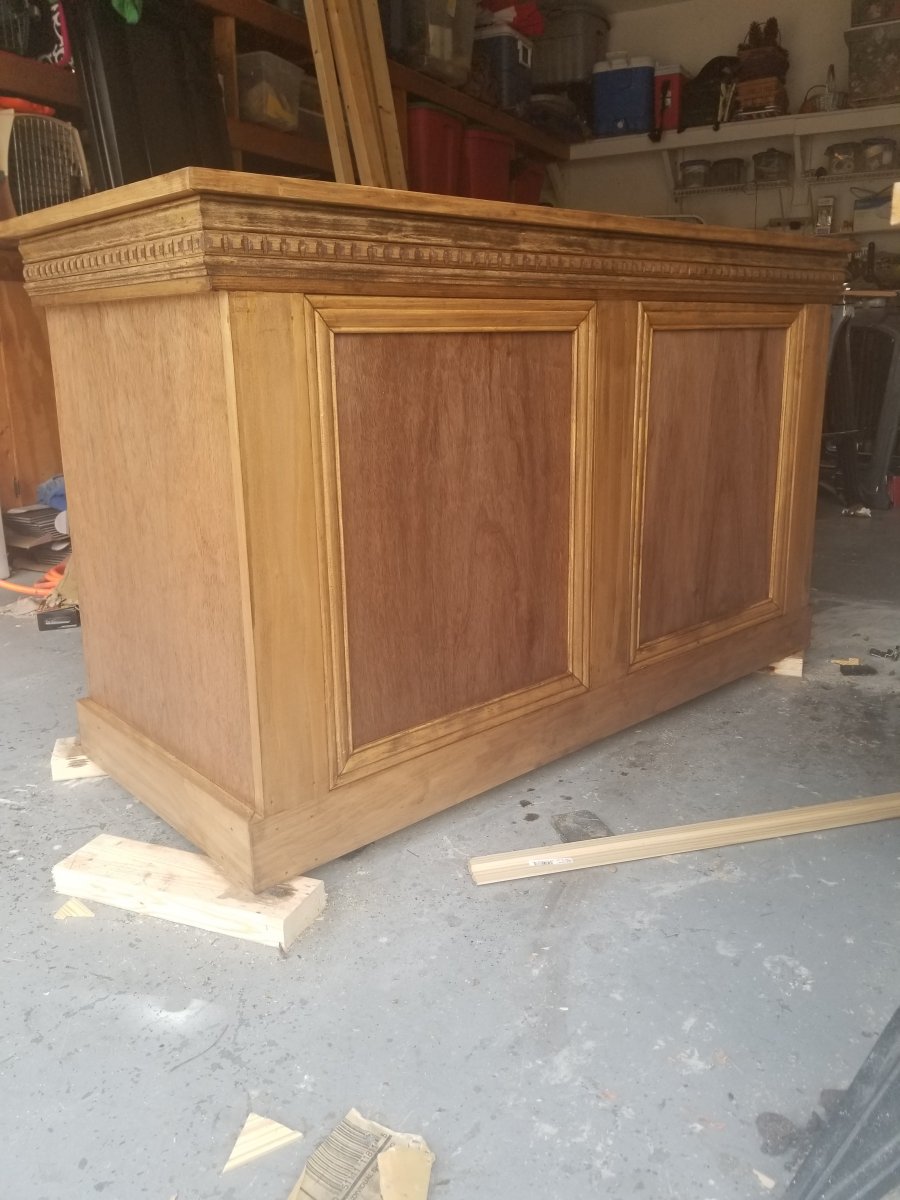 The stand is actually made from a 4x4 frame. My dad insisted on an overkill design, so there are actually supports at all corners as well as in the middle. The middle ones are great for backup, but in hindsight, I wouldn't have included the front one as I couldn't ultimately fit the sump I wanted in the cabinet. I built it a bit taller too, which worked out great since it's just barely enough room for a large skimmer. The higher stand height also worked well in my current location, the office, since it's more desk/table height. Anyhow, the frame was then faced in furniture grade pine and an inexpensive, thin plywood for the panels and sides. In hindsight, the more expensive birch may have been better for color consistency, but the two-tone of the red door panels looks kinda cool. The molding is just basic whitewood trim from Lowes and added a nice touch to make it really stand out. For any future builders, the top is actually just 10" or so furniture grade pine surrounding the edges. This way, the top looks solid with the tank on it, but it reduced cost because it's actually only a perimeter piece.

A matching hood sits ontop of the tank and was built in a similar fashion, with the pine facing hanging down to wrap the tank's top. A wooden dowel rod spans the top cabinet to hang the lights, and a hinged top provides access to the lighting system (and a tension fit door panel for food). In hindsight, the tank top looks really pretty (I'll include photos in a later post), but I would have redesigned it for an easier water change or tank maintenance setup. (Something I mention for any ambitious builders out there in the future).

Overflow: Once I moved, I actually decided to drill the tank. This was a bit intimidating since it had a live, current setup waiting in plastic buckets. Thankfully, it all worked out and I have an overflow!

Sump: 10g with acrylic divider. The large first chamber houses the sump (placed externally to reduce water displacement), a heater to keep temperatures just slightly higher than the house (upper 70s), and the final chamber houses a Lifeguard Quiet One 4000 return pump. Sump is a Coralife Super Skimmer 220g unit I got for a great price on sale at Chewy. Sump is connected to a plug with remote for easy control.

Powerheads: 4 separate units plus the return create ample flow throughout the tank. Two large Hydor models at the top corners of the tank circulate water around the rockwork, while a lower unit from the nano is placed at the bottom corner to circulate an otherwise dead zone in the back. A leftover jet-stream style pump is currently placed at the top next to the return, and aimed at the front glass. Since this crosses the current of both side units, it creates a more diverse flow pattern once it bounces off the glass and swirls back into the tank.

Aquascape:
Crushed Aragonite sand for the bottom.
Mostly dry rock, though there's one piece from PetCo and one from a LFS. LFS dry rock was MUCH better and more diverse.
Macro Algae (Mostly Dragon's Breath, Caulerpa Prolifera) Accidentally introduced what I think is red chaeto off some Mangroves. It explodes when not heavily controlled...
A few mangroves on experiment...

Corals (currently alive):
Firework Clove Polyps
Zoas (no idea what they are, but there are about 6 different types)
GSP
Favia (?) - Mint(ish) Green
Toxic Green Monti Cap
Red Monti Cap (2)
Other Monti (currently purplish)
Orange Lepto
Gorgonian Coral (2)
Maze Brain (I think) - Green and Purple
Duncan Coral
Xenia
Other Favia (Green and Purple)
Green Torch
Green Hammer
Blue and red Favia
Blasto (currently purple and green but have a watermelon coming next week)
red mushrooms (currently 3)
Echinata (not sure which one, but it's orange/purple/green)
Dragon Soul Favia (Colony)
Sunset Monti (HATES light. It only gets color on parts that are shaded, so I'm still working on this one...)
Long Tentacle Anemone (Clowns host)

This is a great start to your thread! Beautiful stand!!!