What is good treatment for a csb who was in a tank with rainbow BTAs.
I purchased an in trouble csb nem from a local Reefer and it was in a tank with other low grade nems- I have heard they may lose colors due to bacterial infections from having other nems near by etc. any recommendations for dipping solutions or treatments. The nem in question is against the back wall next to a healthy csb. 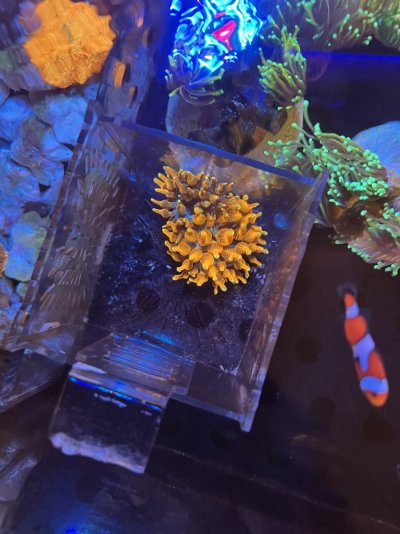 Carbon is has been since I purchased him

Unfortunately some are just not compatible. I have mixed BTA's in the past, and I have some different species in a tank now, but some will simply not get along with others regardless of if they are touching or not.
I've had this happen in several cases, and in each time one species ultimately outcompetes the other. IME, it usually takes several weeks and sometimes months.
I have a rainbow species now that destroyed solid green btas several years ago, but they've been with a rainbow green for a while now with no problem.
I am not sure if dipping it in anything will help, I'll let others chime in there.
One other thing to add, when I expose my rainbows to different light intensities/environments, they will take on completely different colors.

Less light for awhile? Do you know what par it was under before and now? I've noticed with a few CSB in particular that they looked amazing under 50-100 ish par and then when placed closer to 200 quickly turned brown and lost color. Im sure there are tons of other factors but something to think about

Get it out. Sorry, but that is probably the only solution. I have no idea why or how, but they just don't seem to mix and it will eventually die. If you are thinking that you can beat the odds, maybe... but let us know since you will be the only one with verifiable success... they lose their color, they shrink and then they usually die. Sorry.

jda said:
Get it out. Sorry, but that is probably the only solution. I have no idea why or how, but they just don't seem to mix and it will eventually die. If you are thinking that you can beat the odds, maybe... but let us know since you will be the only one with verifiable success... they lose their color, they shrink and then they usually die. Sorry.
Click to expand...

I can send pictures of a tank with green btas, rose btas, csbs, black widows all together, including multiple csbs that are recovering/recovered very large and happy in the same tank after being bleached and loosing color a few weeks ago.

While I dont doubt there can be issues with different btas its definitely not impossible.

Can’t mix them seen it all over the place on the internet maybe u will get lucky but time after time keep seeing that as a consistent variable.
I believe people usually try cirpo if things start goin very south

I have a broadcast cipro dosing thread , it worked for me. I had 3 dying GBTA in a system with rainbows and after cipro dosing they all have recovered and gaining color back now

Not to be a jerk, but let us know how those CSBs are doing in a year.

To ad an update from original post- the nem in question seems to have dulled but not bleached yet and is holding- it has not gotten worse nor better yet- he is currently in my Frag tank which is very stable - hoping for the best! I am worried that if it was bacteria then I could spread to my other csb?

Nobody knows what it is, only that it happens. Bacteria, organic pathogen, alien slime, cosmic dust... no idea that I have ever seen from real source more than just us on message boards.

Heard of a Sherpa sunburst nem?