Been on r2r for a while now and have always felt bad about not doing a build thread. So... my two clowns, which I've had in my 40b since I started it almost 3 years ago, decided to try and kill each other. After a ton of help from the community, especially @Jay Hemdal, I decided to move one of the clowns to a temporary home- a 6g cube i had in my basement. Well, it didn't take long and I was feeling really bad about the whole situation. Last week I finally bit the bullet and ordered a new IM Nuvo Fusion Pro2 40g (long enough name), with stand. It should be here next week. I'm not like most reefers when it comes to having 1000 tanks, and it's a bittersweet situation in my mind. I'm excited to get a new tank but I'm dreading all the work that's about to be upon me... I've just got to the point with my 40b that I'm not doing too much maintenance. Like 20 mins / week. And here i go setting up another tank that's going to require SO much more work! Stupid fighting clownfish. I told my gf I would keep this one as low maintenance as possible, maybe set up a softie tank that isn't going to require so much work and money. But so far I'm off to a bad start...would love to hear people's ideas as to start I should do! ie: gorgonian tank...etc. Anyways, here's a list of what I've purchased so far... 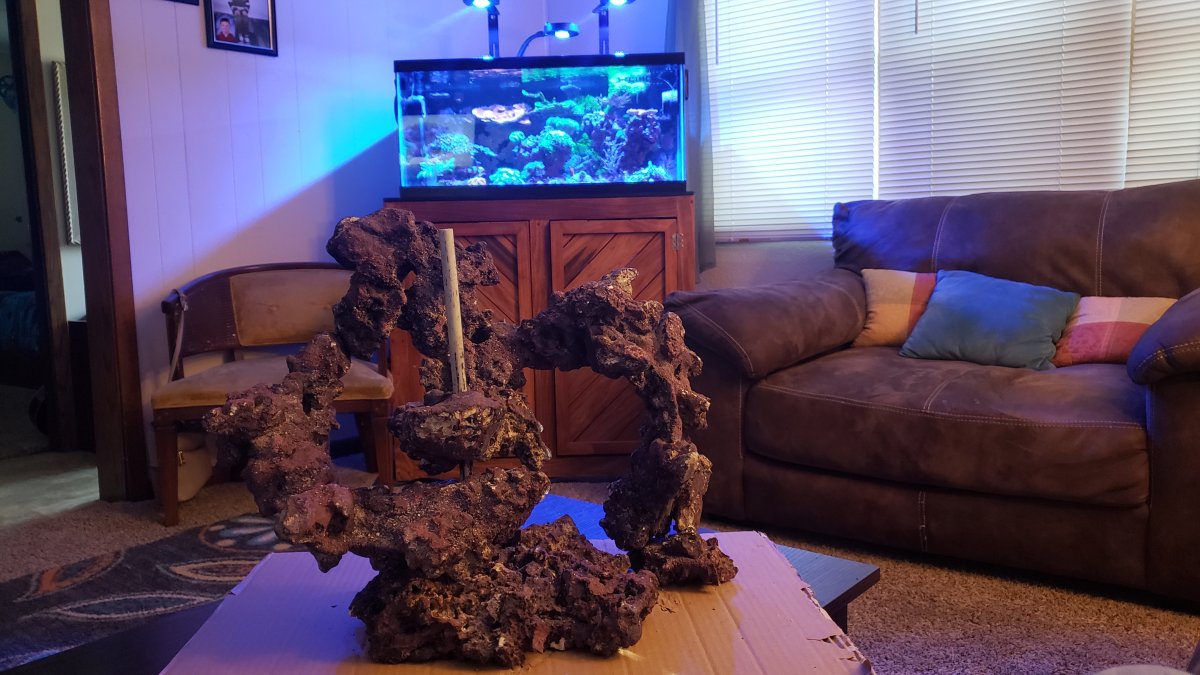 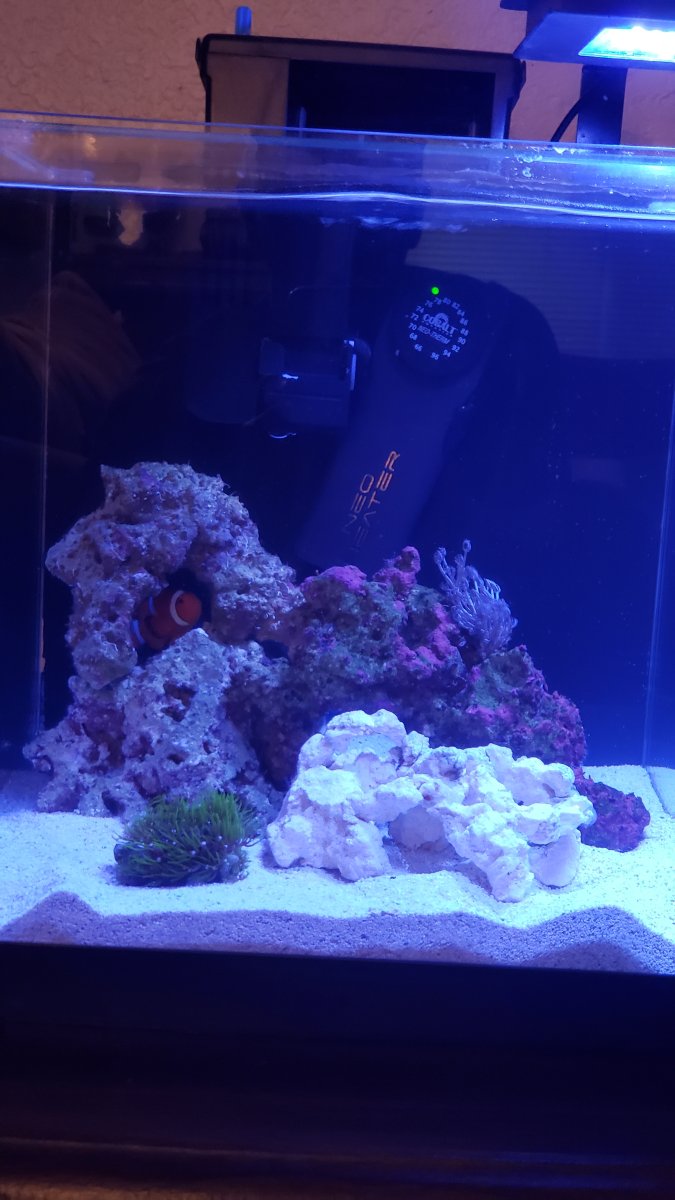 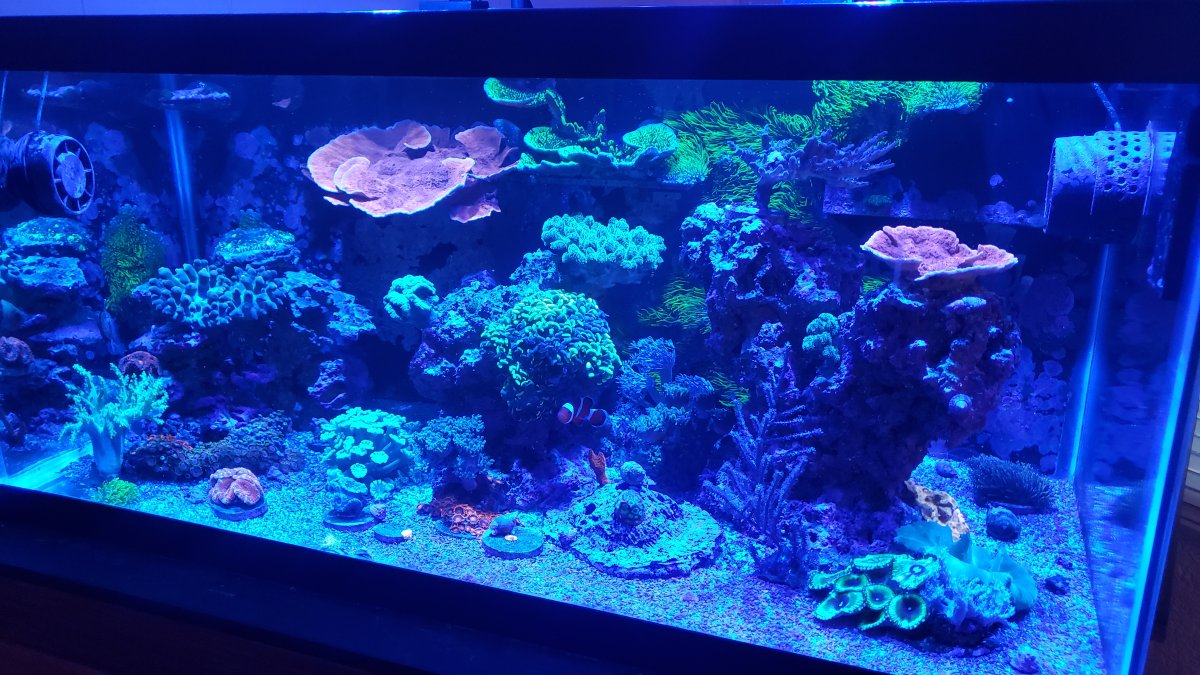 Tank was delivered yesterday... spent all evening setting it up. Moved the clownfish to his new home this afternoon and it seems like he's loving it! It's gotta be better than that little 6g cube he's been in for a month. I think the scape turned out great, thanks to Caribsea and their reef tree. I also threw in the rocks from the 6g (just for now, they're full of pods and micro brittles) as well as some marinepure from my 40 breeder. Right now I'm just running a small Fluval plant light until I get my main light...(almost certainly will go with the 100w Maxspect Razor) 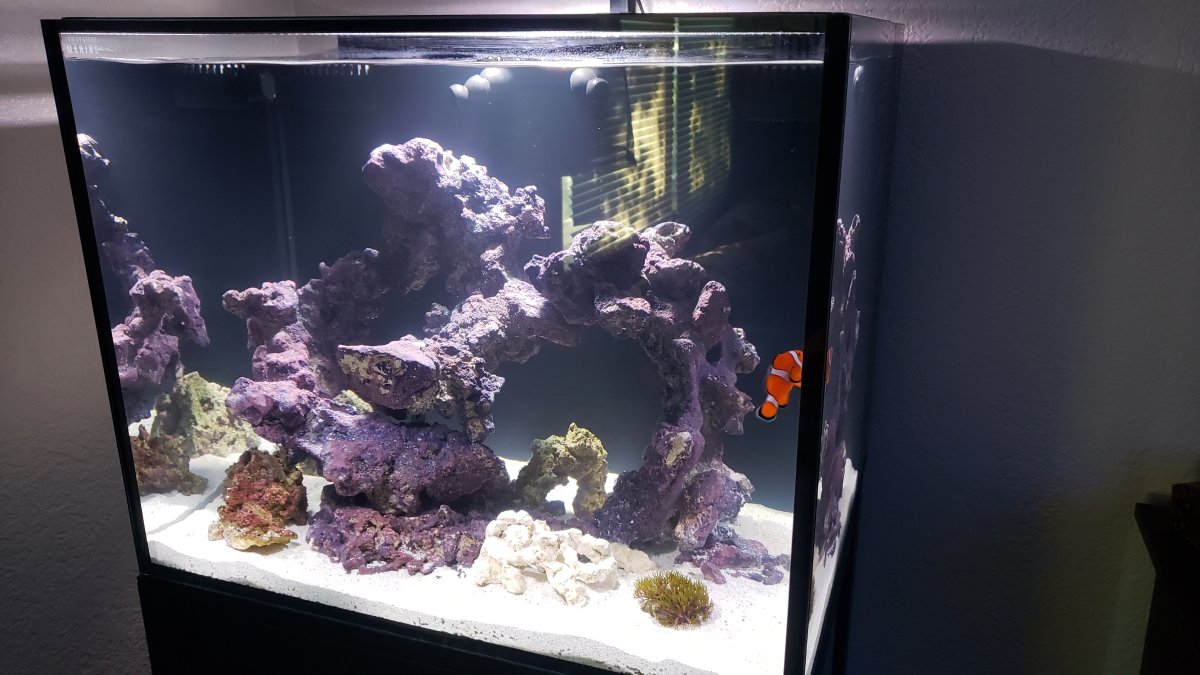 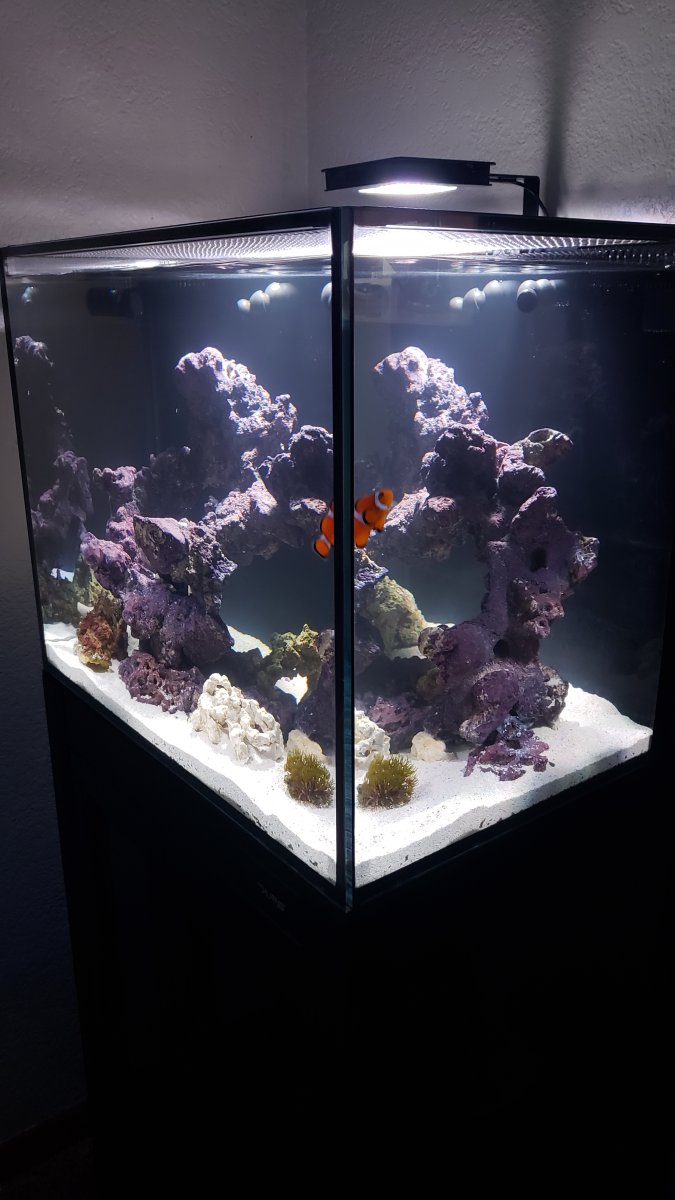 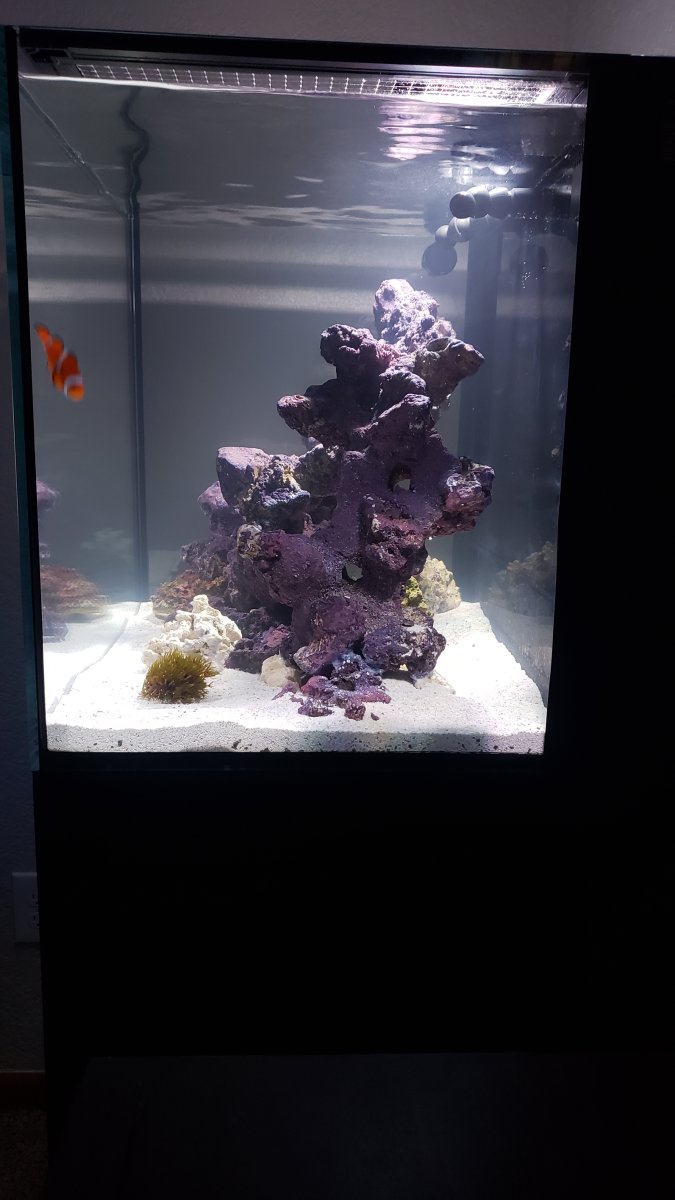 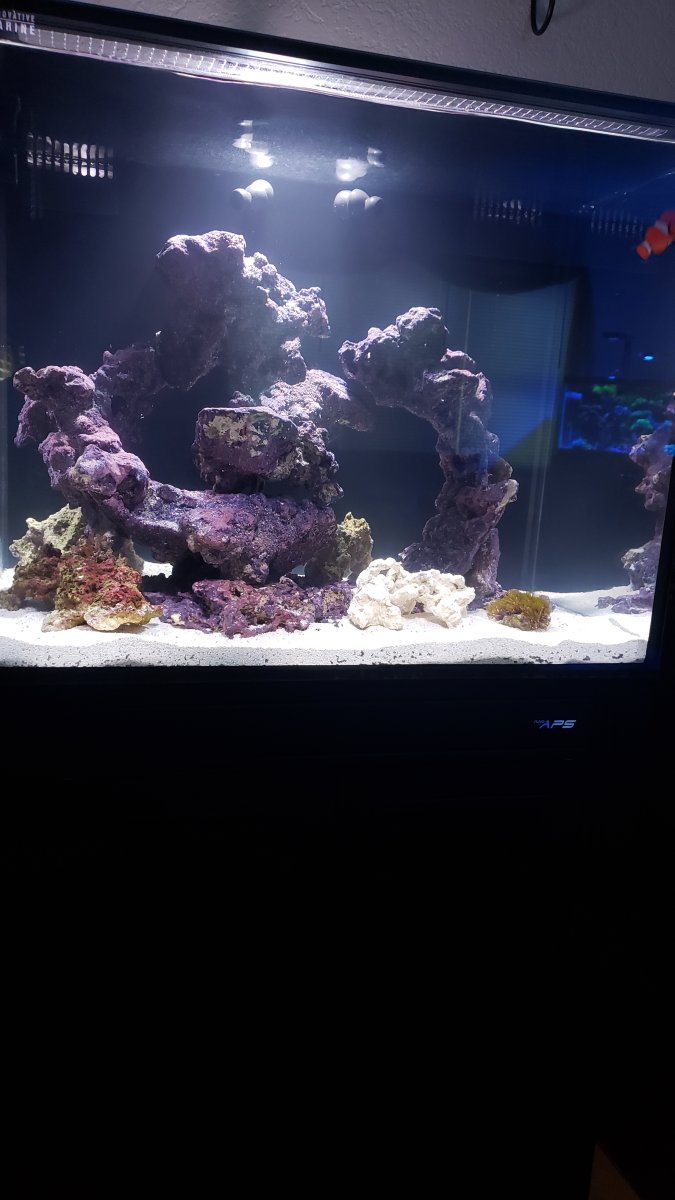 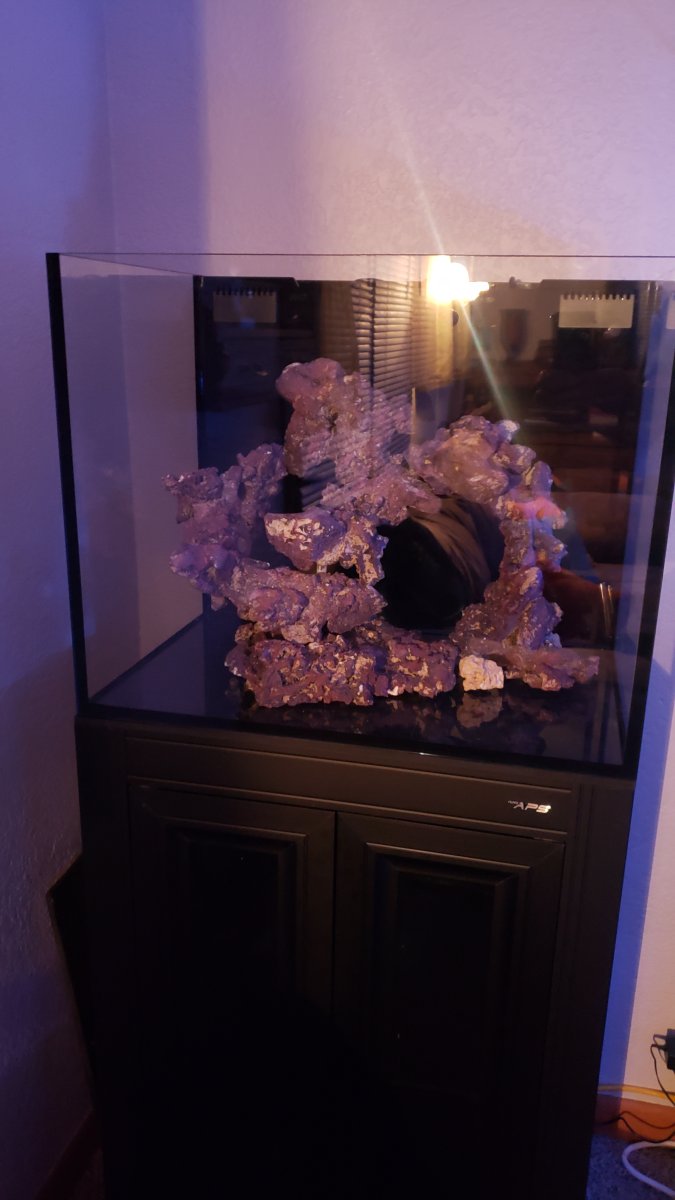 I'm about 6 weeks into the new tank. I added an aptasia eating filefish 4 weeks ago so my clown could have a little buddy... that fish is insane! I've never in my life seen a fish that ate so much- aside from goldfish. But he is so fun to watch. I'll be very upset if he eats corals because I reallllly don't want to have to give little buddy the boot! My phosphates are through the roof and nitrates aren't much better so in addition to carbon dosing, which i started yesterday, I added an Aquamaxx hob 1.5 today. I'm trying not to freak out, as skimmers usually take a while to break in but this thing is pretty darn loud, imo. As in gurgling noises. Fingers crossed. Oh, I also added a Jebao sow...4? and some Tunze ac wavemaker that were both laying around the house. I'm sure I'll upgrade those to Nero 3s down the road but I still need lights too. It was hard enough convincing my gf I needed a $250 skimmer! Haha. I will say this though- that Jebao sow wavemaker that I purchased off Amazon over two years ago has been the best little pump I've ever owned and I'm debating just getting another one of those... and this is coming from a guy that has two Nero 5s on my other tank. Well, that's all I can think of for now but I'm super happy with the way the IM 40 is turning out so far. 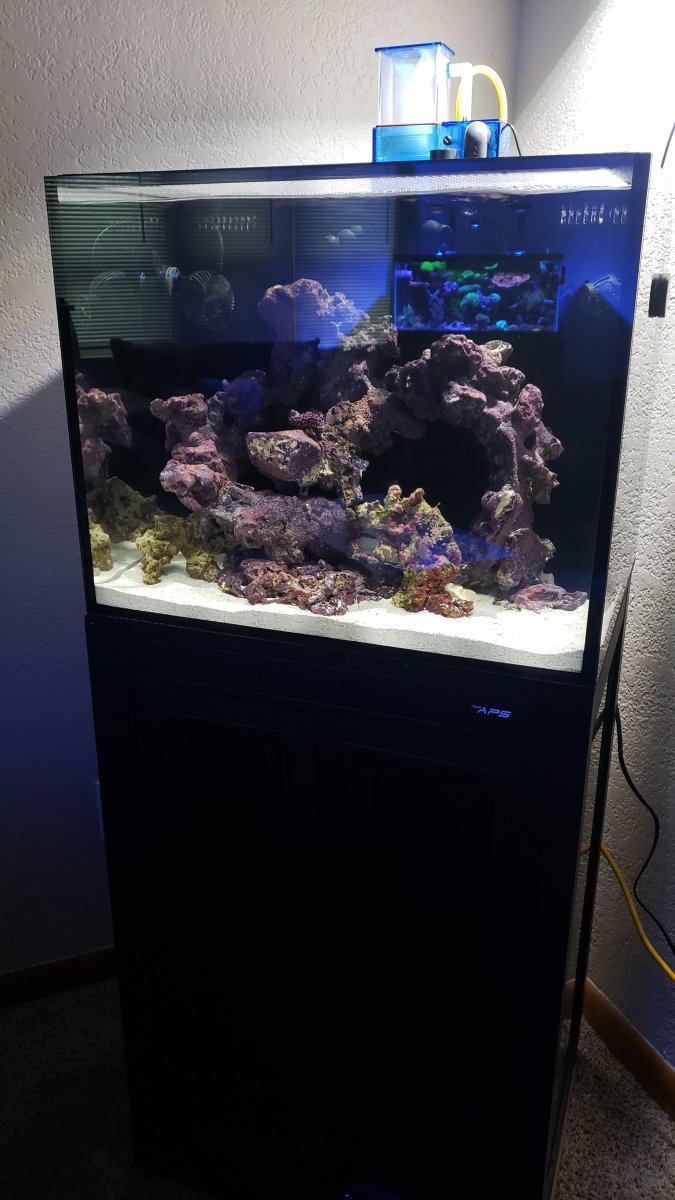 Sooooo.... the Aquamaxx was sucking in bubbles through the inlet pipe and gurgling pretty loud. I decided to use a piece of 1/2 pipe and extend the intake farther down into the "sump." BIG MISTAKE. Leaked all over my floor but I caught it fast so no biggie. Other than the fact I now have a $250 skimmer that could possible drain 10 gallons onto my floor. Don't know what I'm going to do yet... will update.