Honest review of my drunken purchase

viparspectras are good lights, I had good colouration, was getting growth, and they were down right cheap. I have 4 of these lights. 1 was for my coral qt I shut down. truthfully they weren’t that ugly or boxy in my opinion either. I ran mine at 73 blue:17 or 18 white. The middle,one above the glass brace was 100 blue:22 white. Par readings are taken with seneye parts were over 400 par....

so on to the super expensive radions. I have them set to the brs recommended for 4 lights 8,17.5 and mirrored on the other [email protected]” off the water surface.
They are small, very bright, they feel and look premium, however none of this really matters to me, I’m including for others who it may matter to.
the fan? Sorry it’s not as loud as people make it out to be, the viparspectras are much louder.

light spill into the room is far greater than viparspectra.
im running a Modified ab+ I left all the settings the same and increased to cool white to brs recommended 50%. point intensity is 100% and schedule intensity is 100%.

the tank is blue....even with the white up so high, I read countless peoples saying the pros are too white?? Sorry but this reminds me of my old mh double ended bulbs I don’t remember the kelvin but it’s the right amount of blue for my liking. I m happy I didn’t go with blues. Verdict. The tank looks better under the xr15. the florescent colours of some Corals definitely pop more. I definitely like the Look of the tank.

the par measurements....again with seneye....the viparspectra has higher par values.....according to the seneye where I was getting 400 par these lights are only outputting 300. However according to brs at 12” below water surface I should be seeing par values in the 350-450 range. I’ve read the seneye is not accurate so for now I’m going with the brs apogee readings. This also would affect my viparspectra readings. Which probably means I was blasting corals... But it doesn’t change the fact the viparspectras put out more par than lights 10x their price.
this should also be taken with a grain of salt, I understand that these lights are way smaller and I have essentially eliminated a viparspectra size wise. meaning I have the equivalent of 2 viparspectra over my tank....the viparspectras literally went from end to end.

the colour blending and par distribution is better than the viparspectras. Let’s see if the if these lights grow Coral any better...I’ll try to remember to update this thread.

Mobius has a learning curve, but works well.

these lights also throw out lots of heat. Much more than viparspectra I think my viparspectra ran around 26 c. Radions are 41c. I can feel the heat coming off them. Something to consider.
edit. The temp has dropped to 29-30c. Temp taken with fluke temp ir gun.

I also so zero disco ball effect...but I also saw zero with the viparspectras.
just thought I would share An honest review. So far my verdict is I was a drunken fool. Let’s see if I’m saying that in a month or so after corals have had time to adjust and if growth increases. i Always planned on upgrading the lights, it just happened sooner than later.
any comments are welcome....I’ll try to answer questions as honestly I can for anyone who has them.

photo was taken without any filters with just my iPad camera. 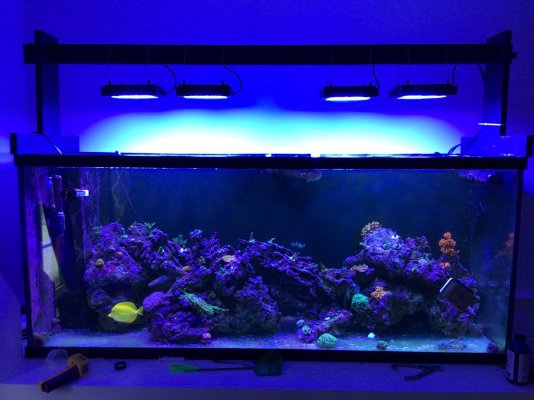 Lol, love the honest review. Not sure what the reflectors are like on the Radions, but viparspectras have those 90 degree lenses, turns those leds into little laser beams. I also have the viparspectra 300w over my 40 breeder, took the lenses off two days ago and there’s a crap-ton of light spillage. But I agree, I like the vipars too. Hope you end up liking your new lights though, I’ve heard great things about them.

I just might get drunk tonight for the new years and go on the Orphek website !!
OP
G

I took my reflectors off and put them all back on...the light spillage and heavy par loss.
OP
G

DO IT! Buying stuff drunk is the best....trust me

is my lights ok for reef?