Just got in 40lbs of KP starter rock. There’s some I know and a couple I removed pending identification:
First up is a couple unknown worms: The white ones. The one has no tentacle things. The other had the tentacles coming out it’s head area. There’s also the one that’s all broken up but I’m pretty sure these are bad guys 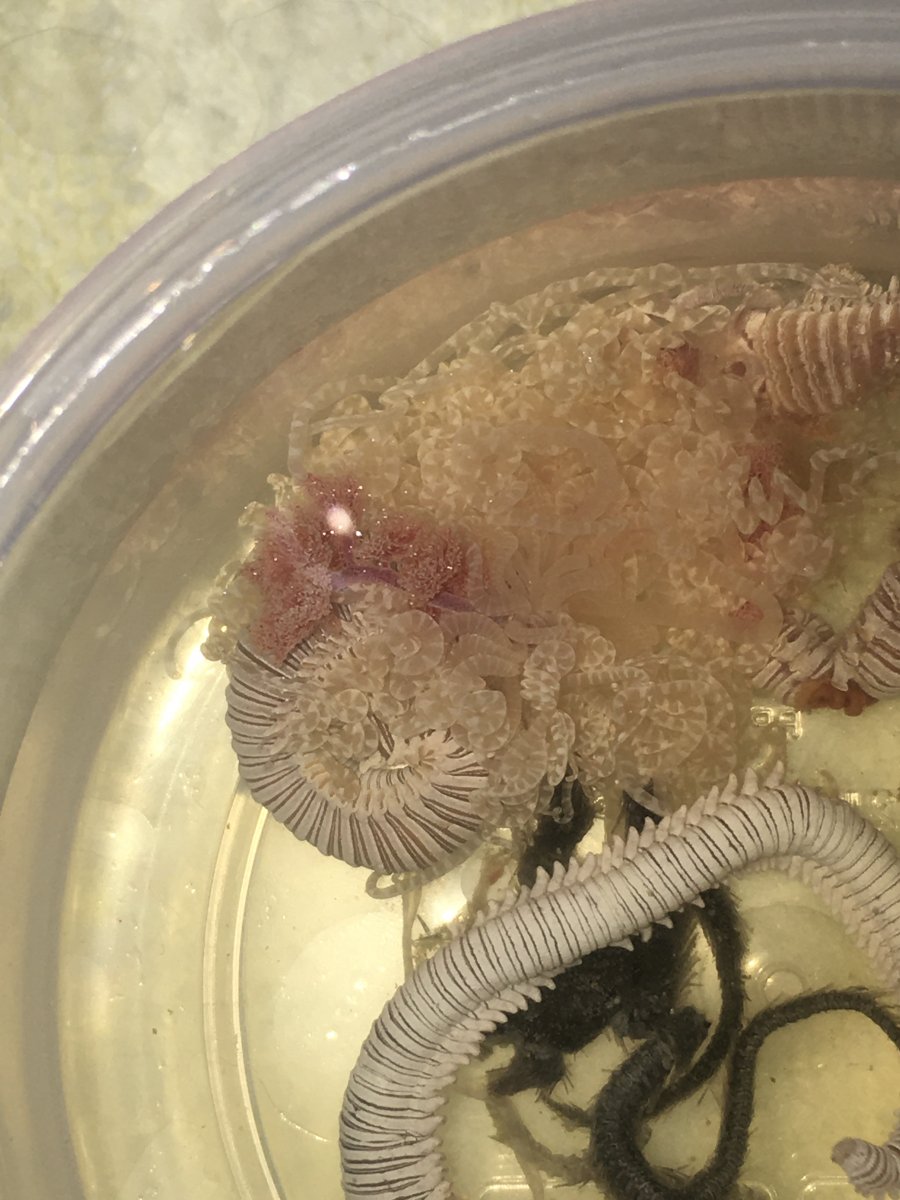 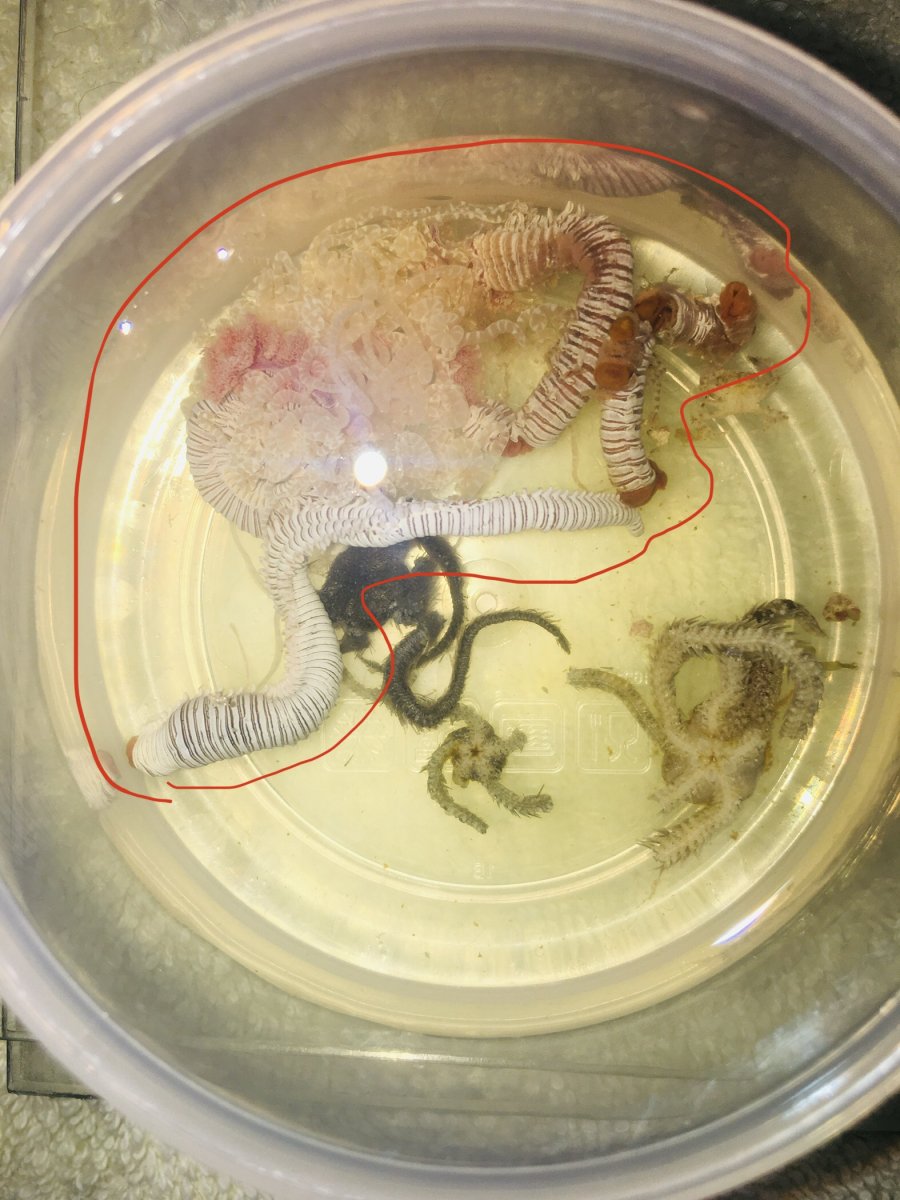 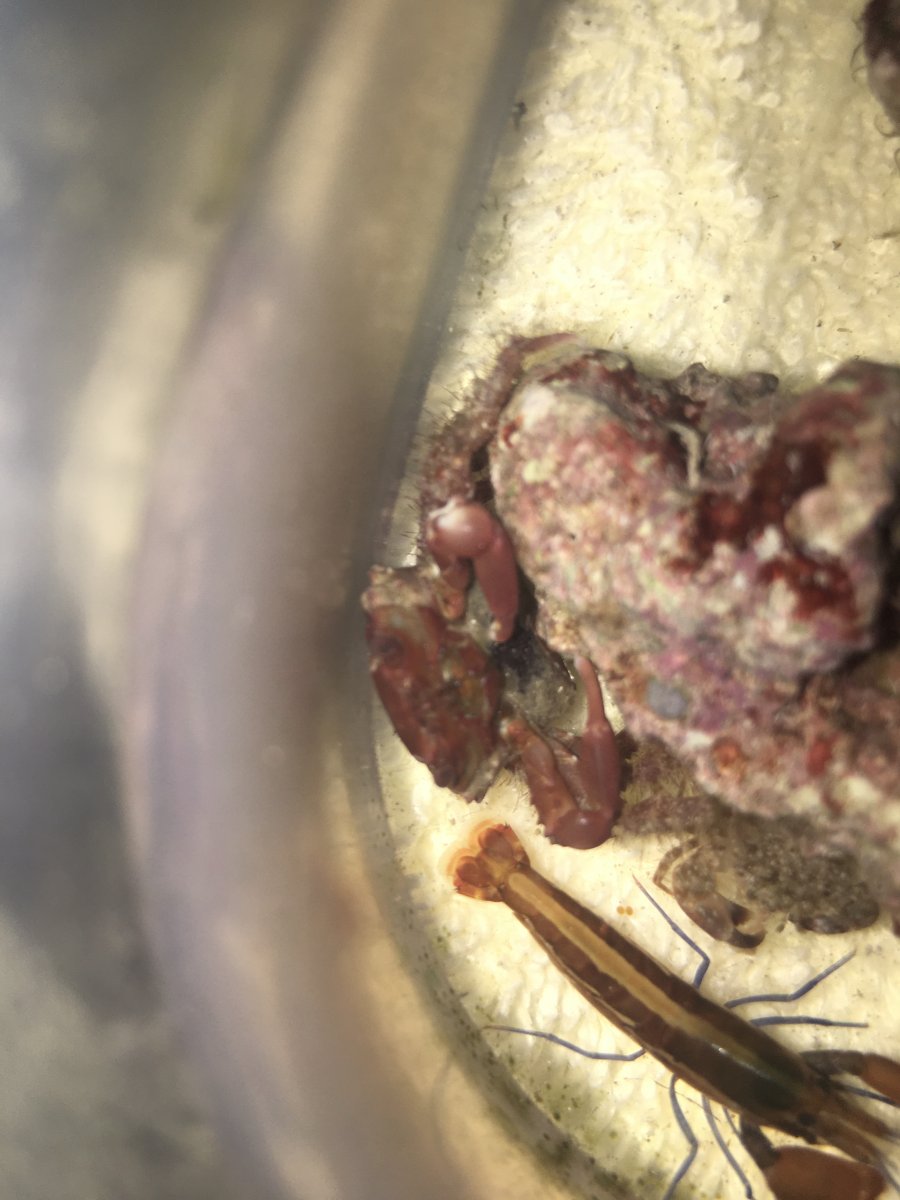 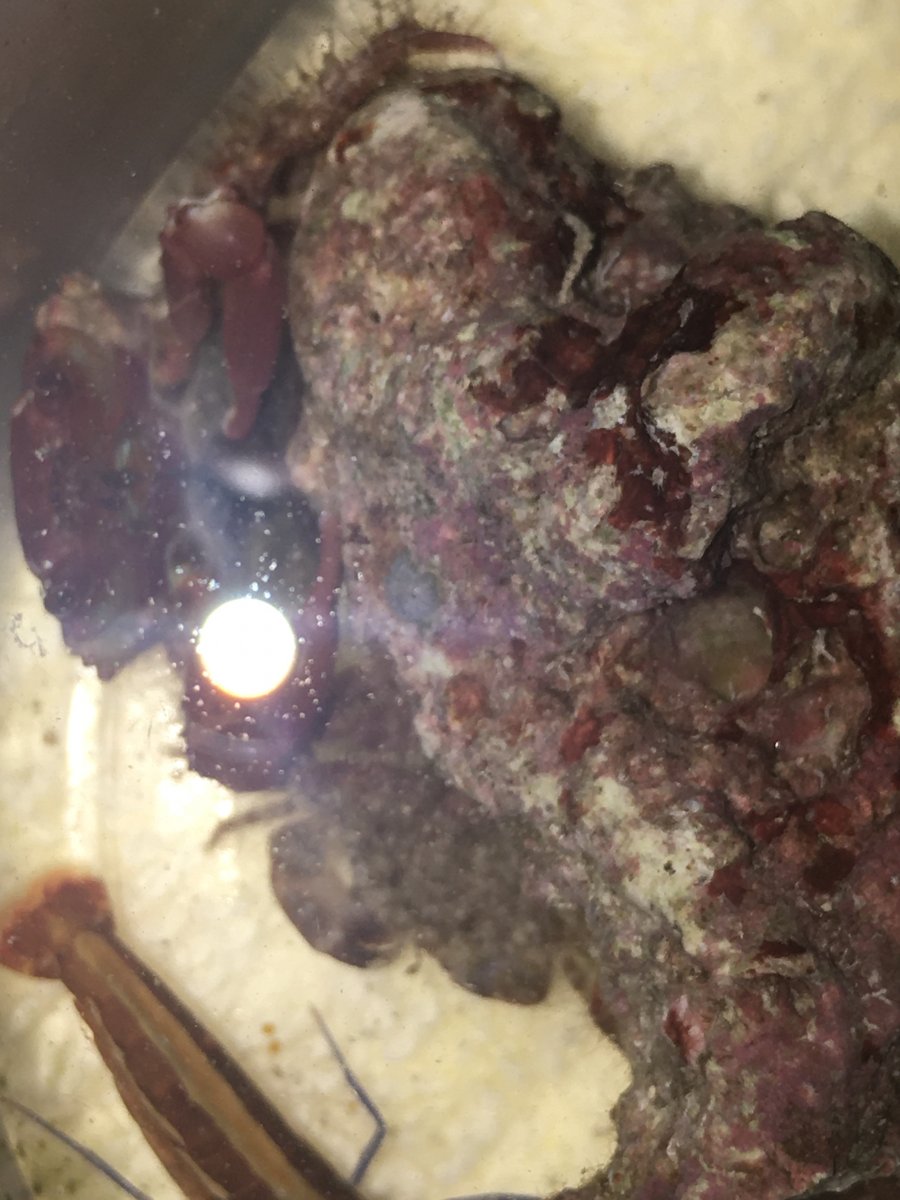 Wow that's a lot of hikers!
Curious, what did you do to shake them off/out of the rockwork? Would be good advice and practice for others to do the same!

The pictures are a little hard. I am not sure many/any were 'bad guys'. One looks like a broken brittle star. There looks like a bristle worm. Some in the red circle almost look to me like feather dusters that are closed. Hope the rock turned out nice
T

Those look like corkscrew anemone tentacles, spilled loose in there with the worms.

I would give the worms a bit in a decent-sized bowl of water, see if they extend any tentacles. They kinda look like tubeworms/feather dusters.

Get rid of the green brittle stars, those are fish-eaters.

The red crab looks like a mithrax, the other I'm not sure of. If you're giving them a good home in the sump, it doesn't matter either way.
OP 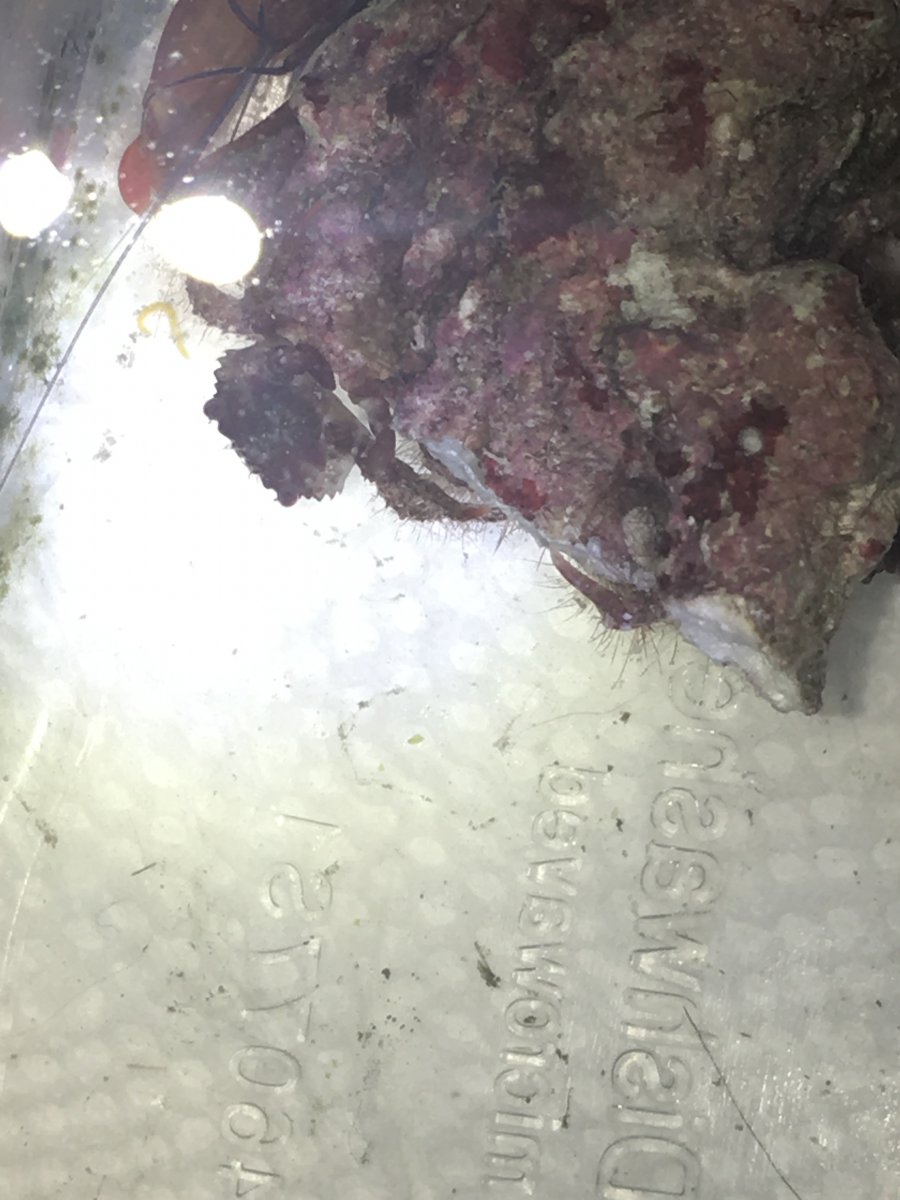 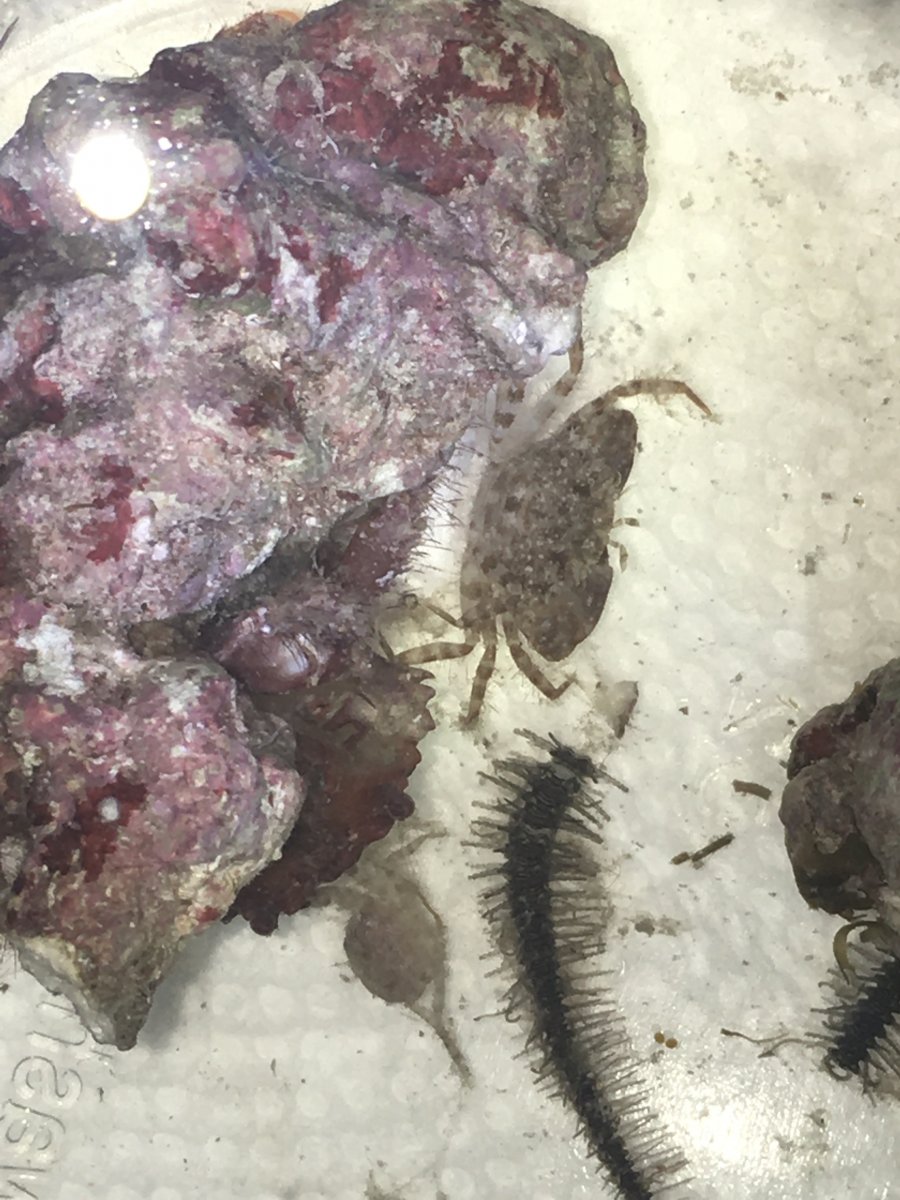 Thanks for the replies! There were a couple feather duster tubes, one with the worm and one empty so that would make sense

I do apologize as there’s a lot of stuff in the pics. The brittle star legs I tossed in to see if there was any life left to them

A lot of the large worms look like bobbit worms. Not all bobbits are predators. Up to you if you want to find out which ones are or are not.
Fuzzy crabs are most likely gorilla crabs. Red crab could become a coral muncher. Females of the species are usually safe because of the smaller claws.
I feel bad for the brittle starfish. The black and white one is pretty safe. If he's still alive.

Blue legged pistol shrimp will not pair with gobies and are aggressive.
OP

Yea there were a couple dead brittle stars but there were several alive that got put in the tank. I sumped all the crabs and the worms. That way if it is a baddie it should get decimated by the return pump if it gets that far.

I have the two pistols in the display already. We shall see what happens with them
OP

The red "fuzzy leg" crab is a red mithrax. Look at the flattened tips on the claws--used for scraping algae off the rocks. KP sells these separate as well.

I just got some of this rock as well last week after giving up on waiting for their "Primo" rock. Have to say I like this rock better than the good stuff I got last Jan. Not a big fan of the macro--some of which was Dictyota (and a little green bubble Valonia) but the red mithrax's took care of that. Would have been nice if they left the Halimeda and Gracillaria alone though.

I haven't found a bad worm yet in mine but I got this rock for the worms to seed a deep sand bed. This will seed a 125gal remote fuge in two years so not concerned too much with "bad" hitchhikers.

My real concern is not being able to get any biodiversity from the ocean if two yrs time. Was surprised when Tampa Bay Salt Water closed shop so used this rock to start a 40 breeder seed tank--and have been pretty impressed with KP.

TBS changed ownership and should begin shipping late summer early fall last I heard. I went with KP since they are from the keys and not the gulf so possibly slightly warmer water inhabitants.
With that said, when I ordered this, they had 2 15lb premium packages in stock but I was mainly looking for the bacteria more than the hitchhikers. Now my wife wants some premium rock for the hitchhikers lol
T

I really don't think those worms are eunicids. Worth noting: bobbit worms are a single species of highly predatory worm. The group they're in, of which some are predatory and some are not, is the group of eunicid worms. They looked like eunicids at first glance, but something isn't right. I think they're feather dusters that have shed their crowns from stress. They may recover and regrow their crowns, in which case you should probably move them to the display.

Crabs in general are not trustworthy in reefs or with easily-captured animals. Some smaller species with smaller claws are much less likely to cause trouble. You should probably feed them in the sump- they aren't likely to get enough food just on their own unless you're overfeeding a ton, and leaving them to barely scrape by seems cruel. I would expect to lose some of those crabs eventually, some of them are going to get biggish and probably consider the others as food.

Most brittle stars should be fine, if well-fed, but green brittles trap and eat live fish. They arch up to make a little hiding spot, then, when a fish goes under them, curl around and catch it.

2 types of worm and a squishy sac