First, I’d like to say this community is amazing. The wealth of knowledge and willingness to share is incredible. Like many of you, I’ve spent countless hours and days just reading and learning. Thank you for all the contributions, links, videos and postings. I don’t know if I would have ventured into this hobby without this community.


After staring at a blank wall in my living room for 5 years, I decided it would be the perfect location for a new reef tank. There were several considerations since this is the center of the house. I would have to allow for foot traffic and contain both light and sound. To accommodate everything, I decided the best tank for this location would be a 90 gallon long (48x18x24) with and internal overflow and a canopy.

Lots of research led me to quite an equipment list:


The tank is on the second floor with a mixing station in the basement. 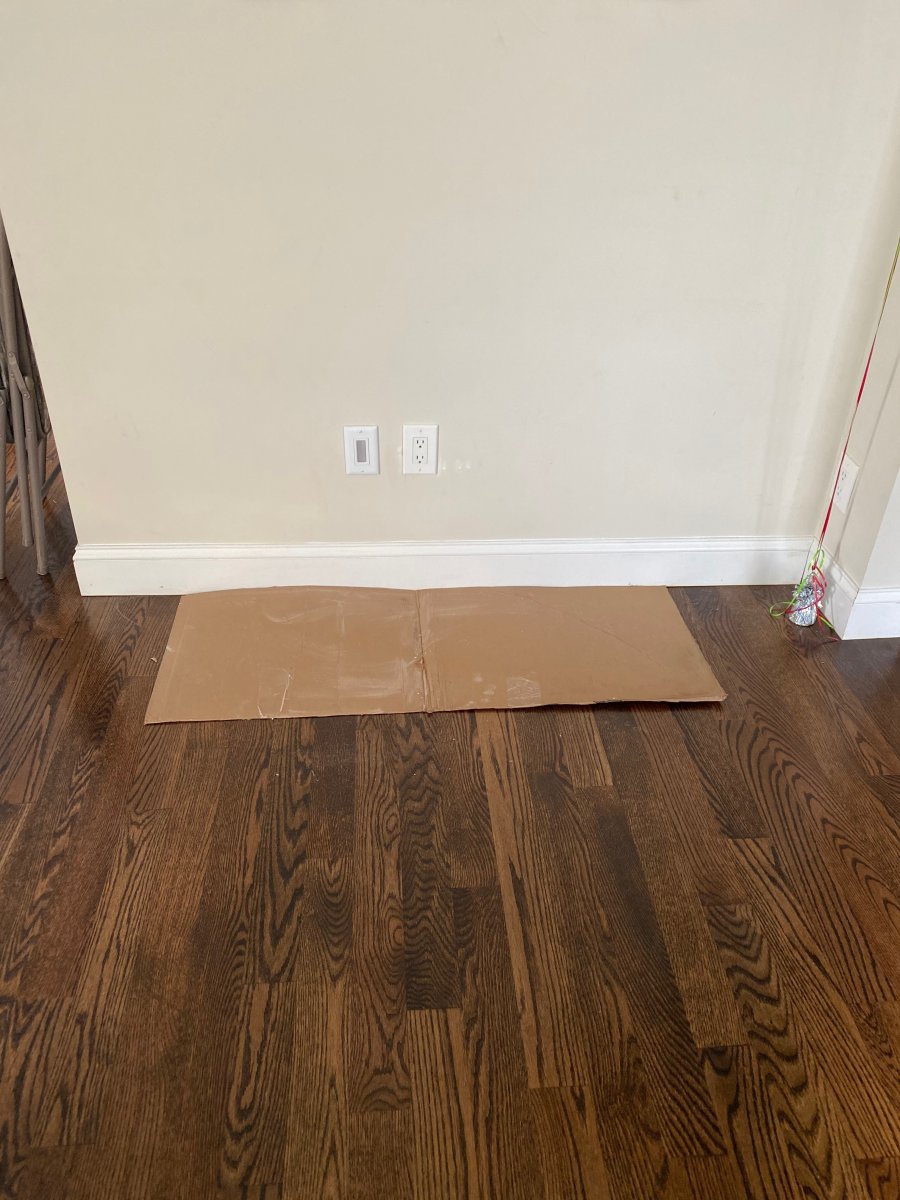 I built a stand for the mixing station, which consists of a pair of 32g brute containers 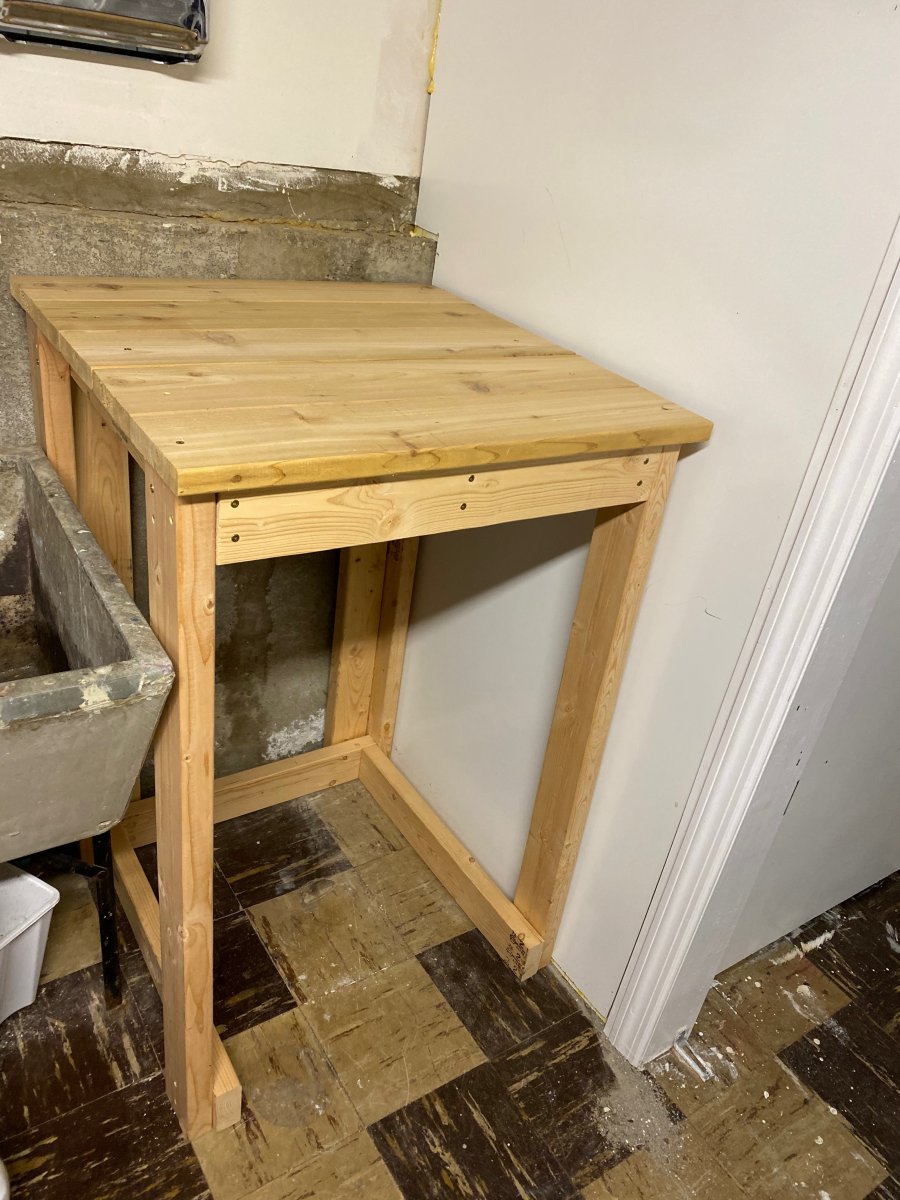 Mixing station will have both RODI water as well as new saltwater. Sine the tank is on the floor above, the plan was to run RO lines from the basement to the living room. The RO lines will support the ATK/ATO as well as AWC using the DOS. New alt water is mixed in the lower Brute container, mixed with a Sicce pump, Korialla nano and Eheim heater. 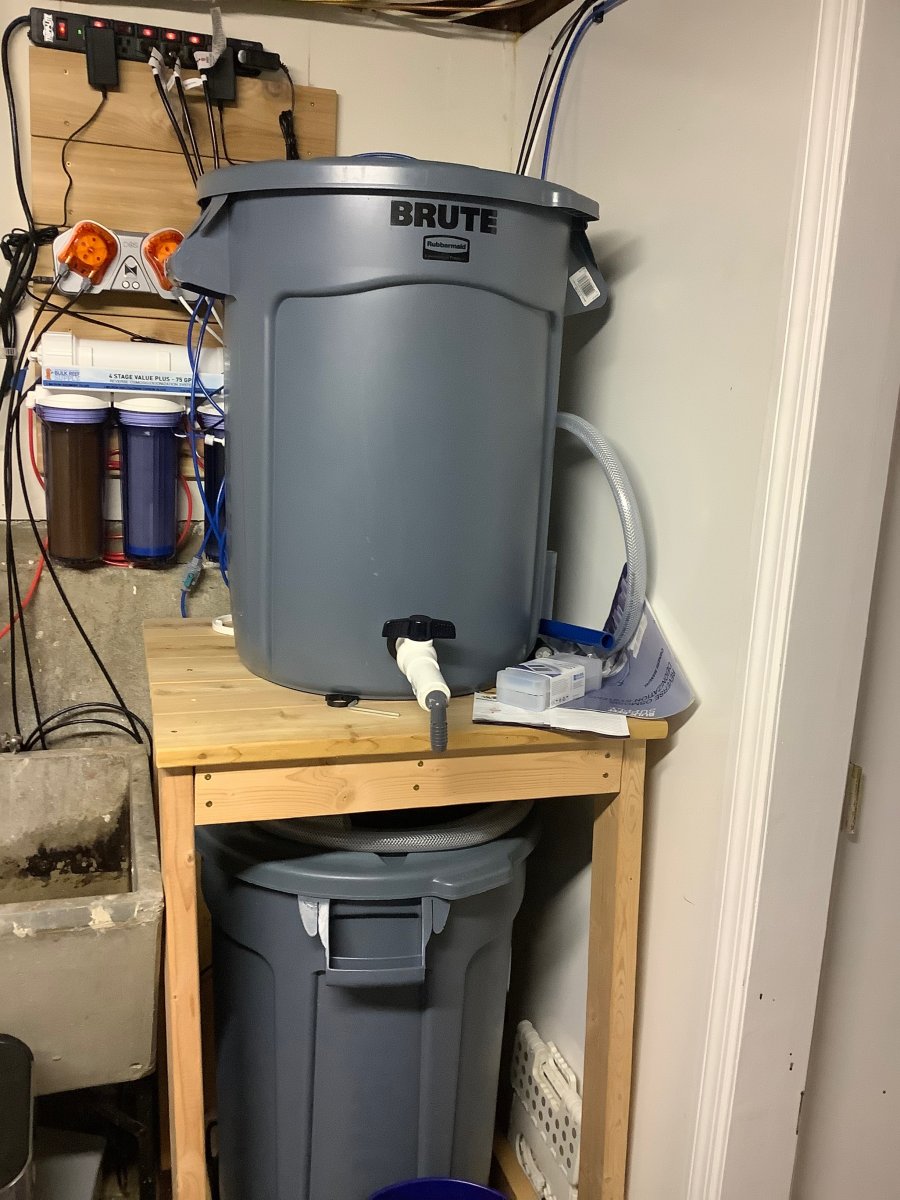 Ran dedicated electric and the RO lines to the living room. 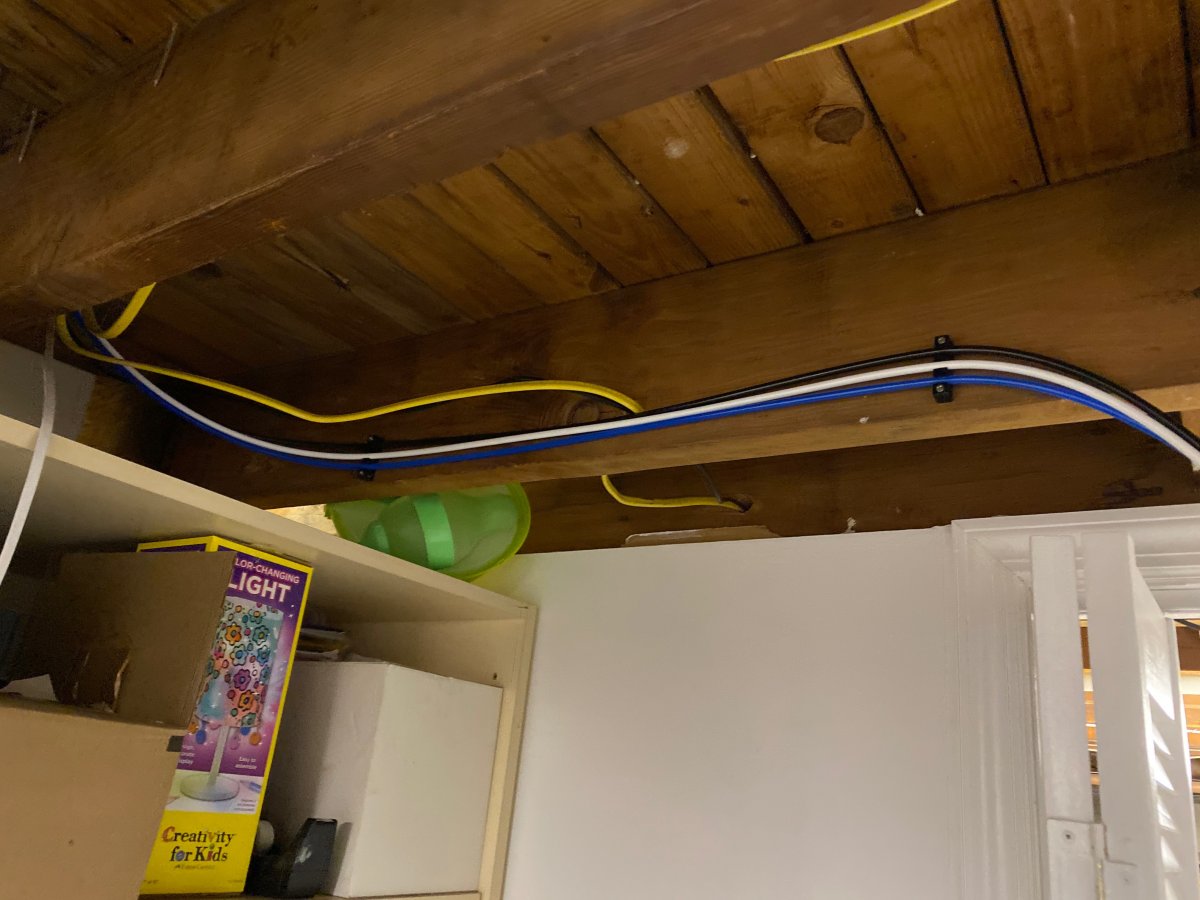 After about 6-8 weeks, the tank arrived in early November! All the prep is coming full-circle. 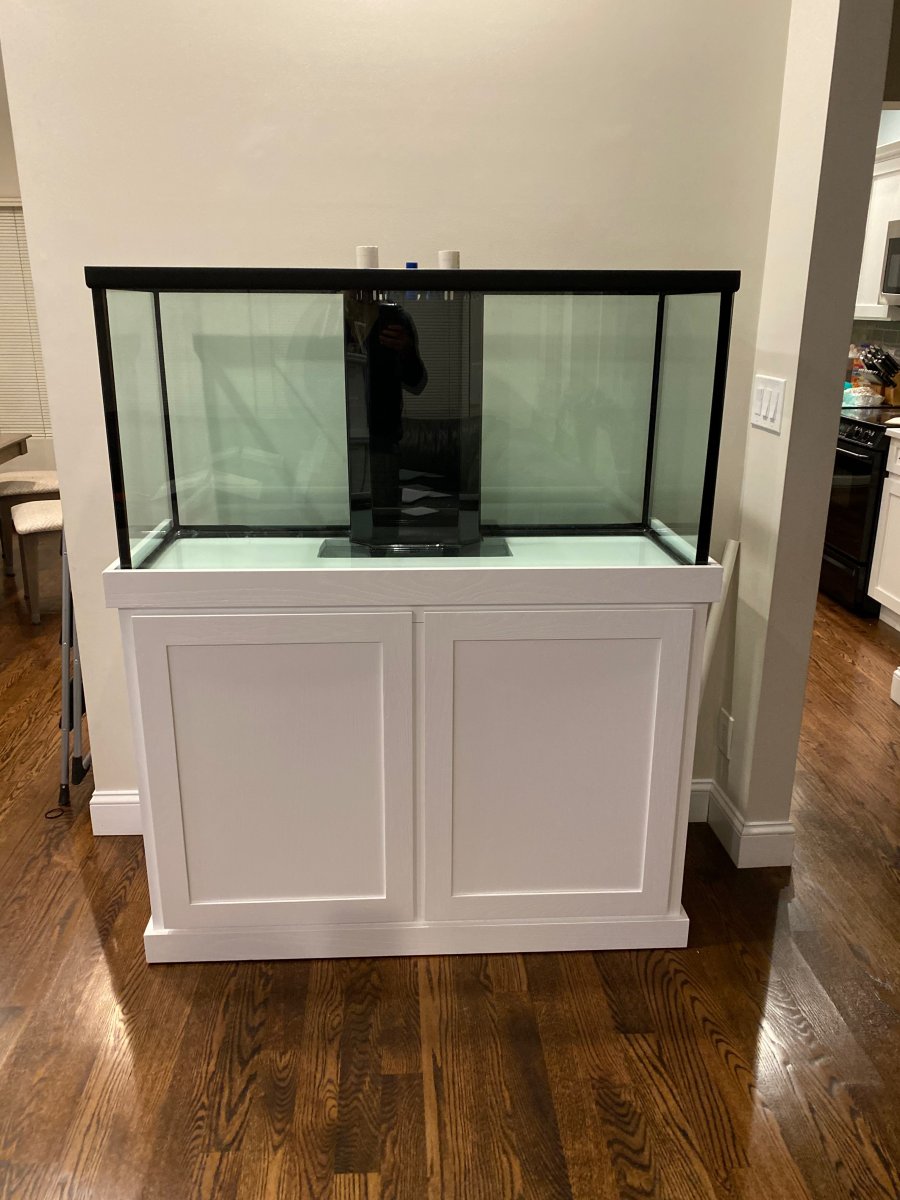 Put the sump in place and started planning the plumbing... 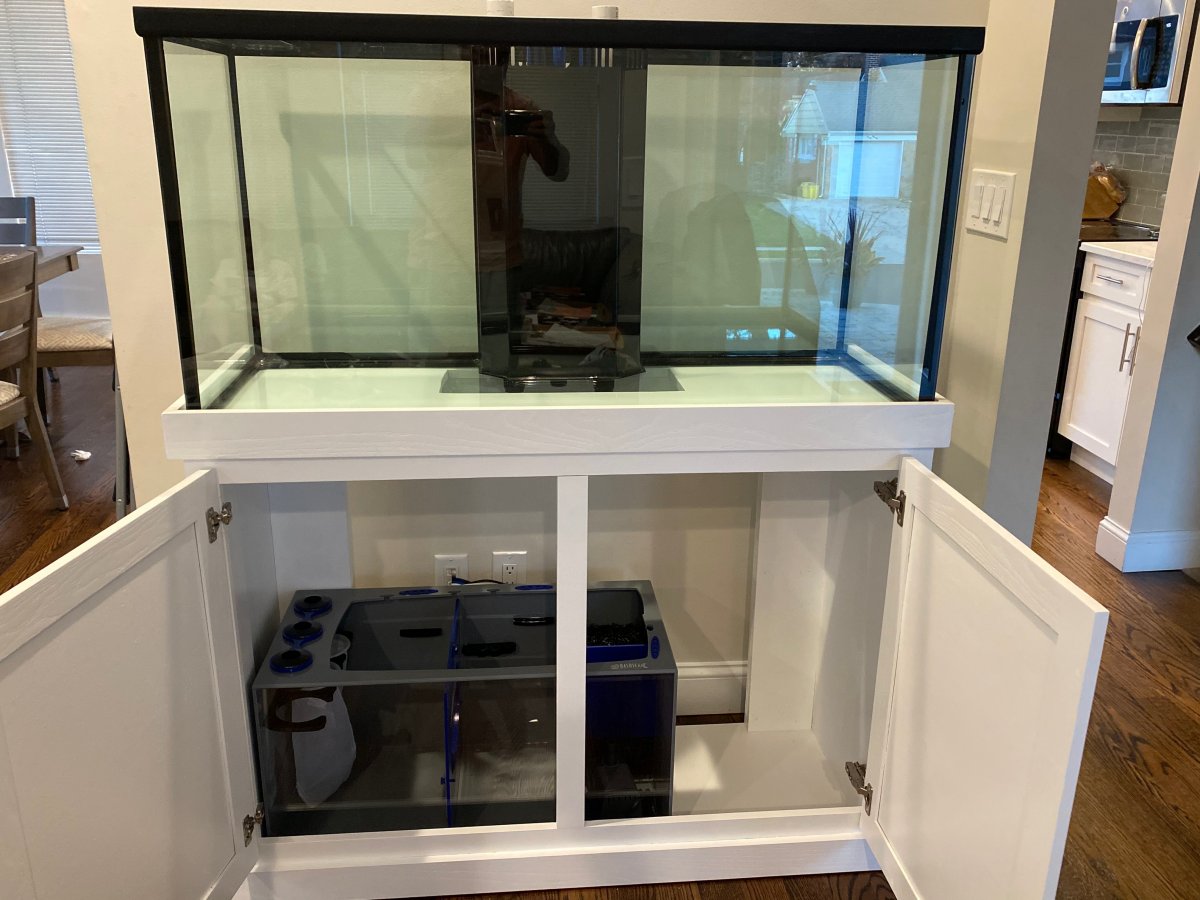 Now, I’ve never plumbed a tank before, but with all the experience and information posted by this community, I felt confident I could do this. Biggest concern, as I’m sure all newbies have - flooding the room. The overflow was drilled for 2 drains and 1 return so this would be a Herbie-style plumbing setup. I decided to try to hard plumb since I thought this would work best for me.


After many attempts at dry-fitting the bulkheads and plumbing came together. This design left me with enough clearance to work and clean the sump. 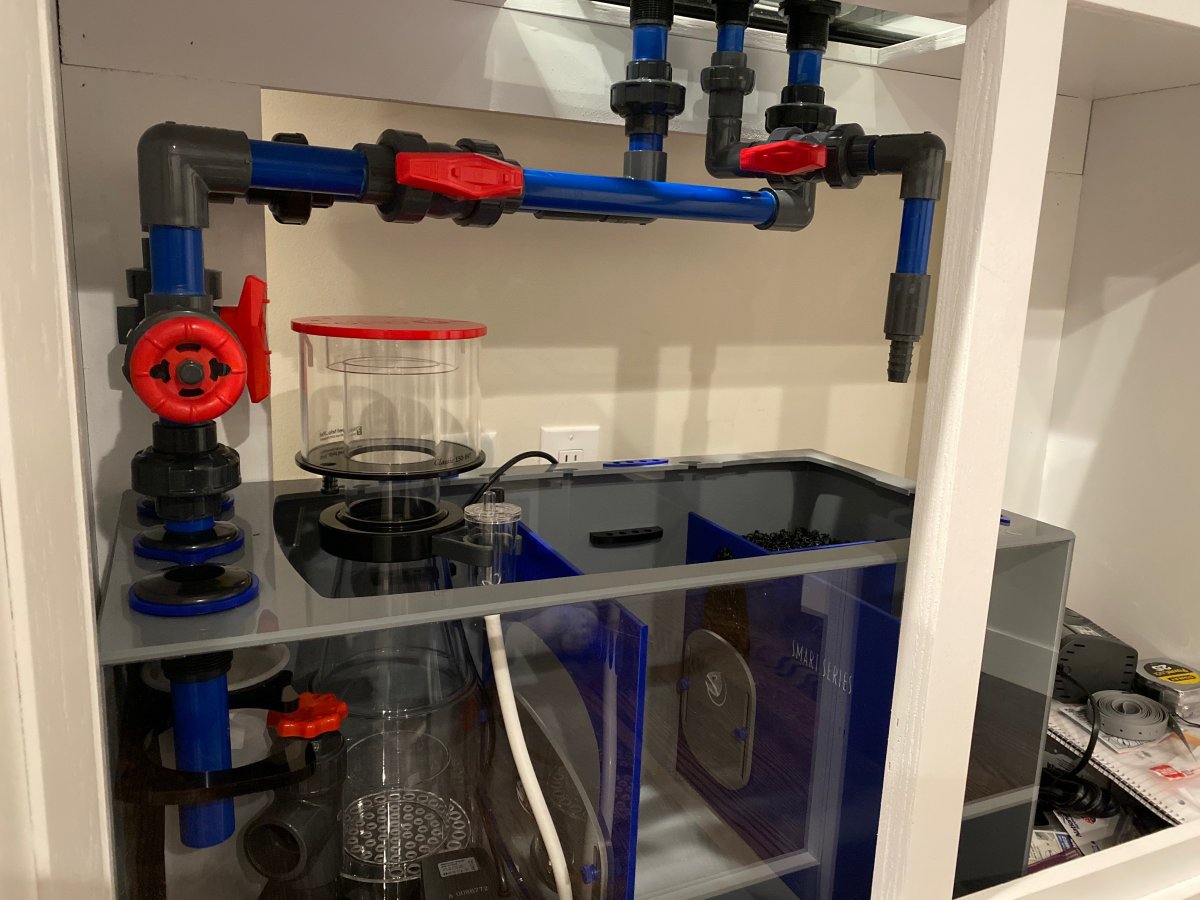 Once all the plumbing pieces were water-tested, next step was to fill the tank and check for leaks. Before adding all that weight, I added a black vinyl background. I used RODI water flowing directly from the basement for the fill up. I figured if the tank showed no signs of leaking, I’d do my initial salt mix directly in the tank. 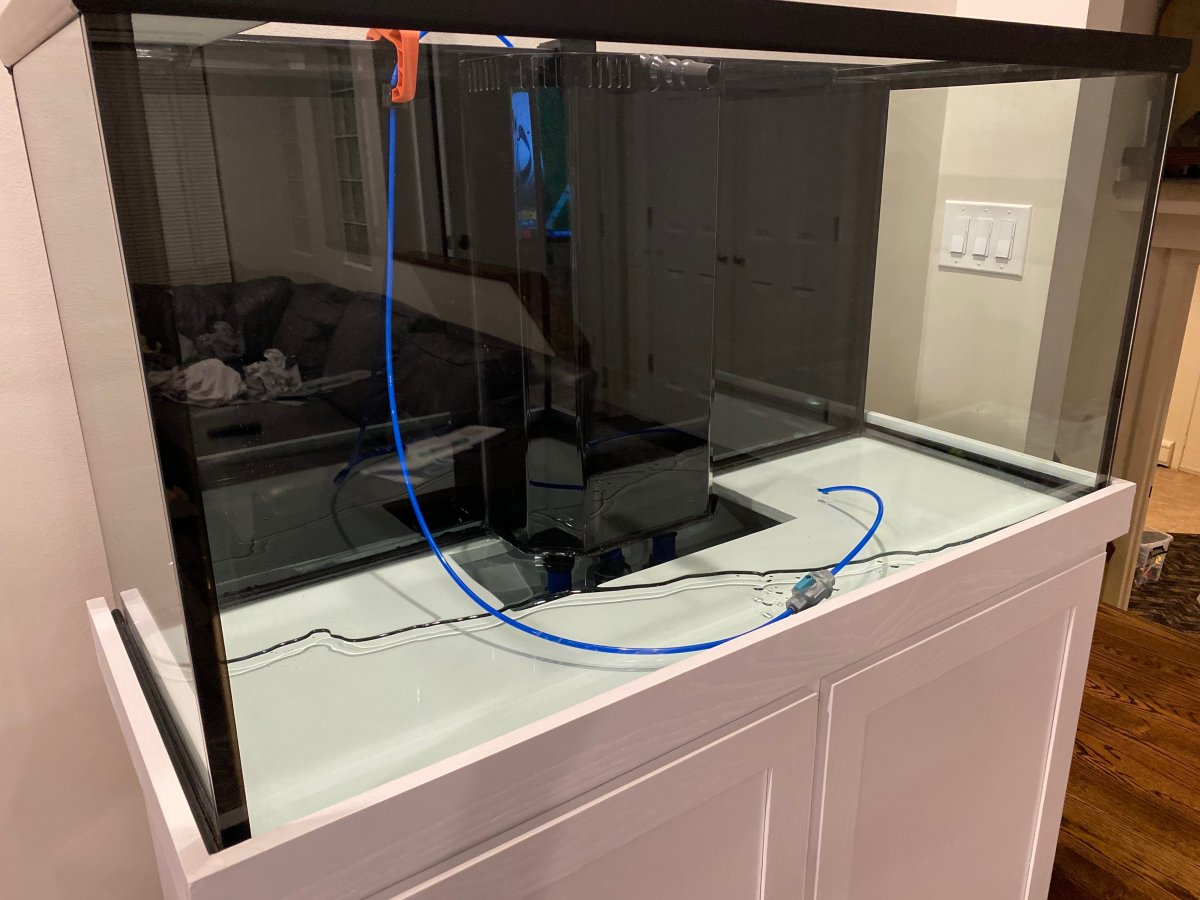 
And while I did this all on a cardboard base the dimensions of the tank, I learned it was nearly impossible to glue, mortar and transfer it exactly as it was on the table. Goal of the scape was to provide various spaces for both fish and coral. Read on here that one concept was to try to provide hiding places that would still be viewable but inhabitants would feel safe. Like hiding in plain sight. TBD if this will work, but here’s what I ended up with 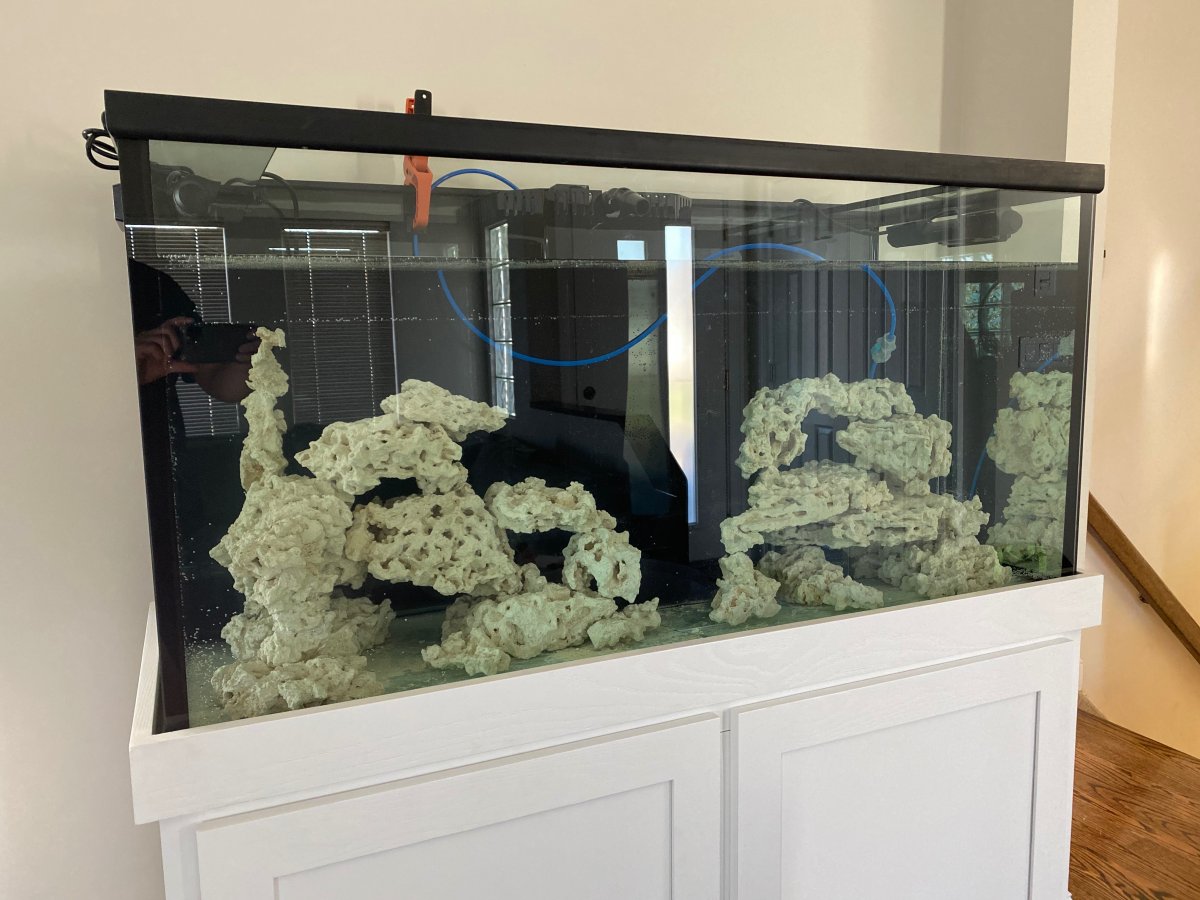 Next step... a control board for the Apex, ATK, Varios and Maxspect controllers plus the Neptune Energy Bar. With a 48” stand; a 30” sump, I used what space I had left to keep things organized. 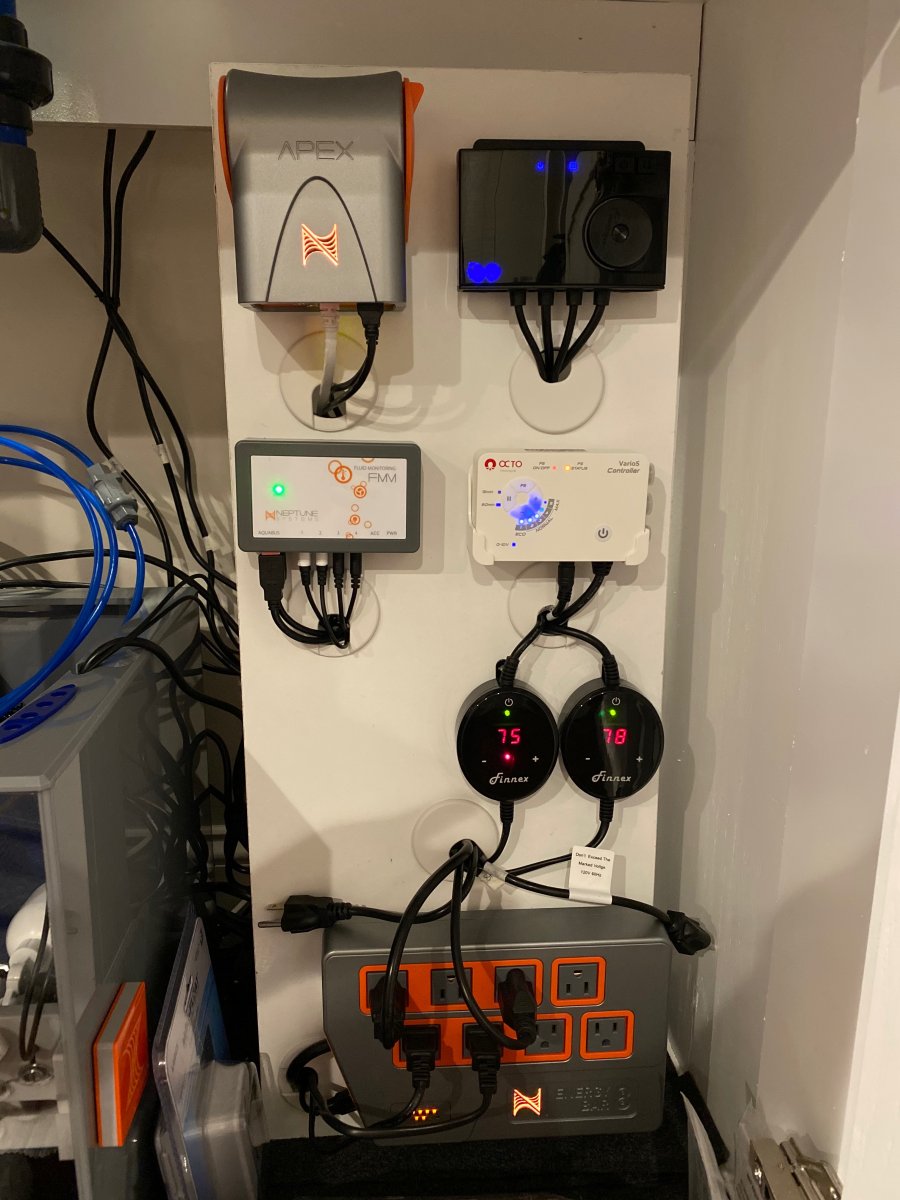 With everything under the tank in place, lighting was next. I decided on using the mounting arm for the Kessil. After all this work, and coming this far, I was still hesitant to hang the lighting from the canopy. Don’t have a good reason for this but just felt more comfortable this way. So up went the AP9X... 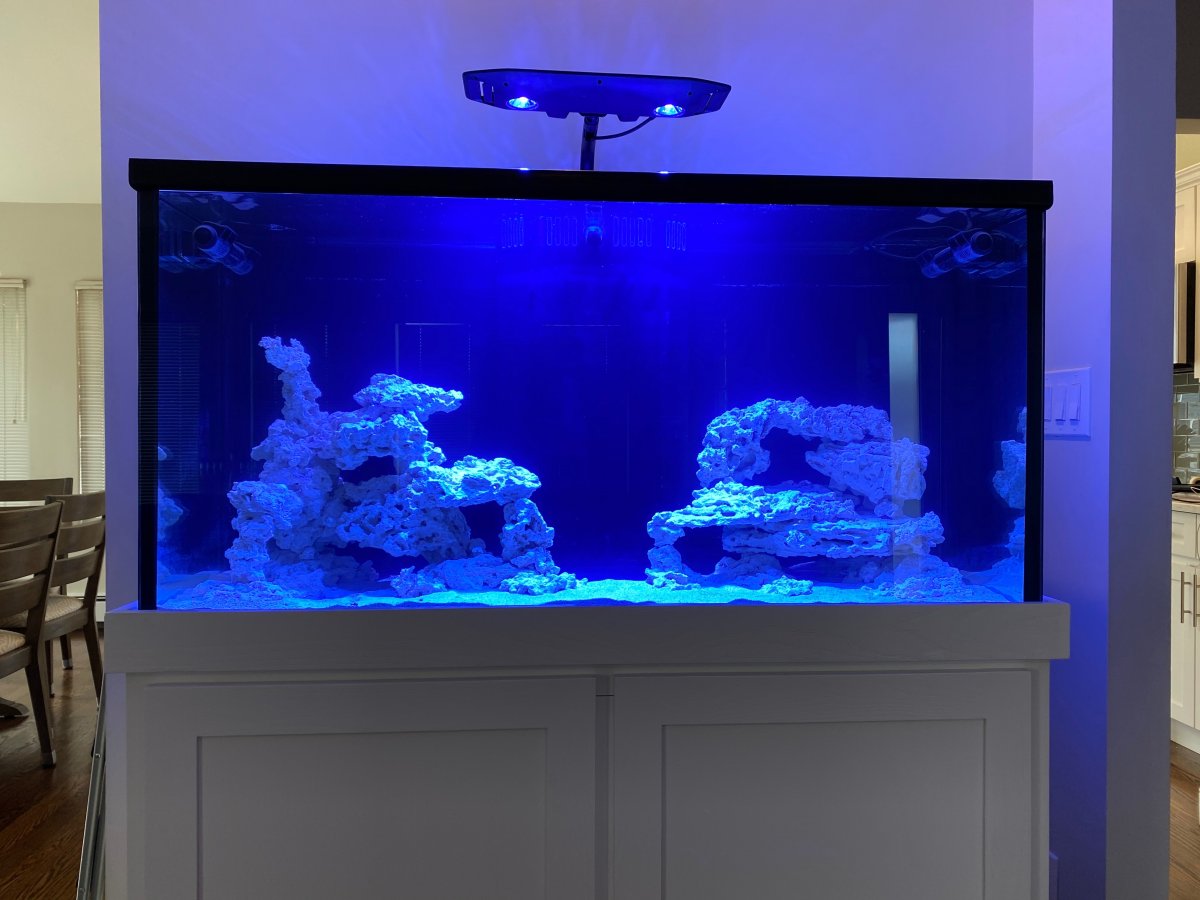 Fast-forward the early December. The tank is set up, systems have been connected and tested, and it was time to cycle. Decision was to do a no light, fishless cycle using Dr. Tim’s One and Only along with dosing Ammonium Chloride. This process too nearly 3 weeks to get ammonia at 0, nitrites at 0 and the tank able to convert dosed ammonia back to 0 readings in a 24 hour period. Current readings are ammonia 0, nitrites 0, nitrates 10-20 ppm (using the Red Sea reef testing kit). 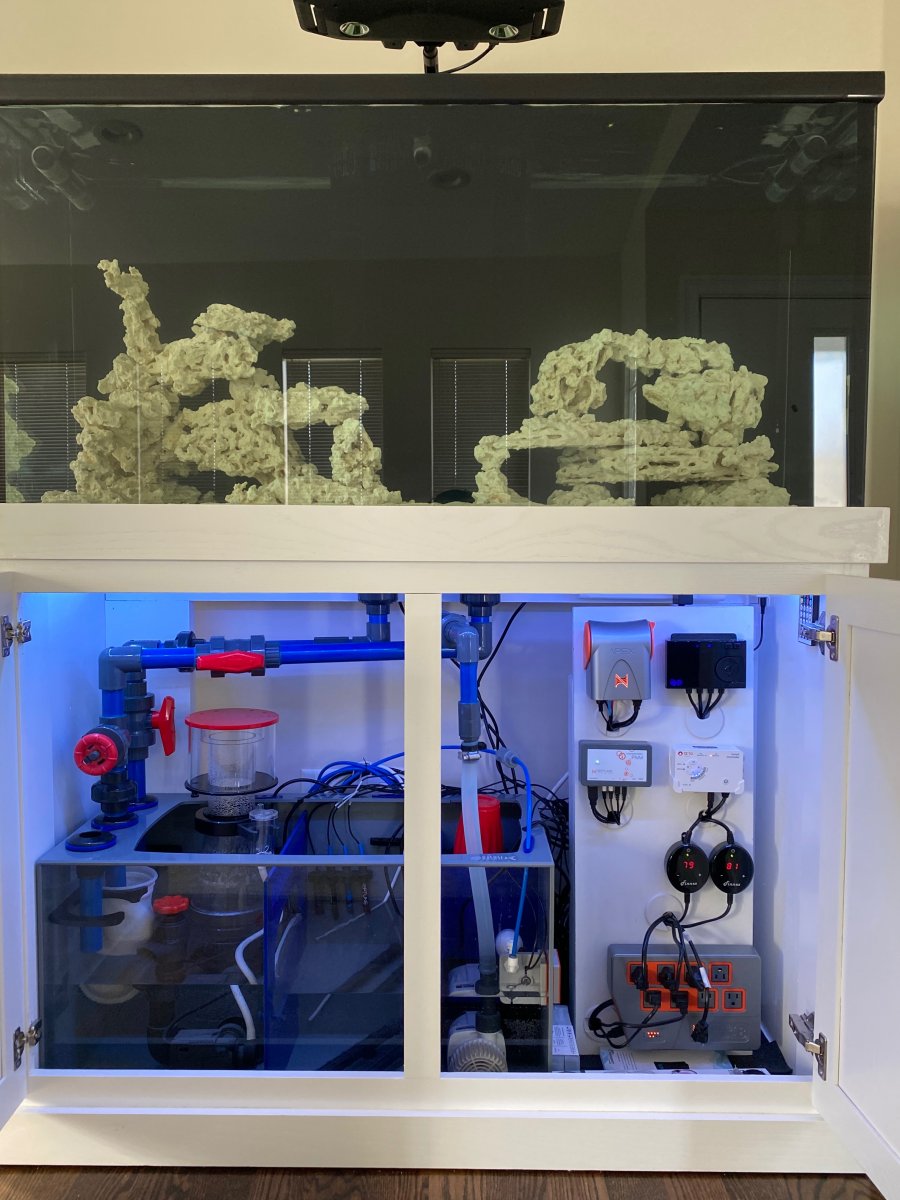 After talking to folks at several LFS’s, I went ahead and added 2 spotted clownfish as my first inhabitants. Readings continued to hold steady so a week later I finally got ready to turn on the lights and acclimate the system over a 2-week ramp-up. Small clean-up crew of snails and hermits are now in the tank as I wait for the new tank uglies to begin.


Ideally I’d like this to be a mixed reef with a nice balance of fish, inverts and coral. Since this is a 90 gallon, I am thinking about this for my stocking list but nothing is final yet....


2 clownfish
Midas blenny
Wrasses (McCoskers, splendid pintail, lunate)... or some combination
Goby (maybe?? Not sure I want a sand sifter where the sand is moved all over since I’d like some coral on the sandbed)
Long nose hawkish (maybe — reading mixed reviews on how reef-friendly they can be)
Yellow-eye Kole tang (perhaps a Tomini tang but NOT both. Only 1 tang for this tank)
Fire shrimp
Skunk cleaner shrimp
Maintained cleanup crew


And here’s where I’m at today. Thanks for everyone to tagging along and for sharing all your knowledge and wisdom!!

Thank you all! Happy New Year! 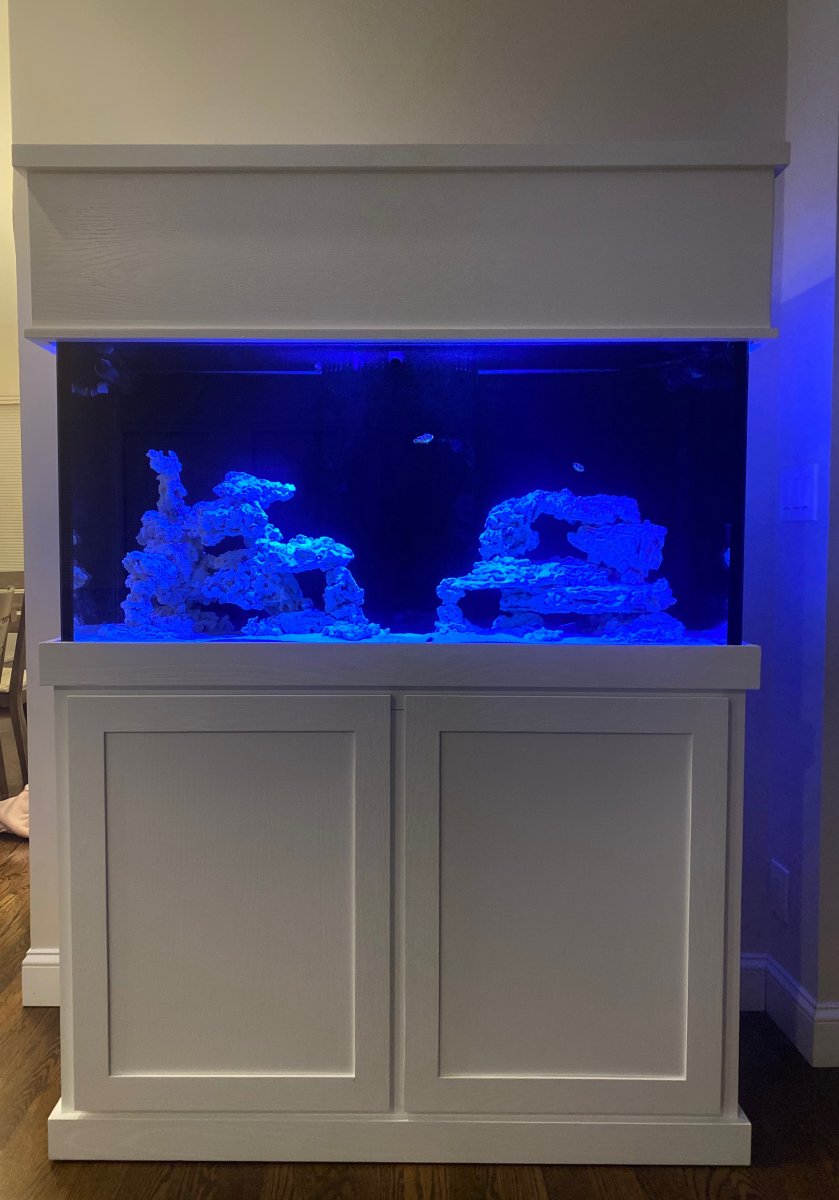 I like the aquascpe too, very nice setup! All the controls look nice and neat in there. Cant wait to follow and see how the tank looks over time. I myself just got a 90g (transported Fowlr tank) no corals for me, just fish so I live through other peoples tanks haha

I love this! My method was the same as yours for the electronics.
I kept adding and adding....
Had to do something, build a stand and moved almost everything over to that and it reduced the heat dramatically.

Hope you keep adding below there!haha
Love how you ran your ATO line too!
My wife would never let me do that unless she left for a vacation or something