I just picked up a new eschemeyer rhinopias last week, and last night I noticed they were looking a little bit plump for having not eaten in a couple days. Today I find this clear blob in the tank, which is definitely not shed and and appears to be an egg raft.

Planning on setting up a 10 gallon w a sponge filter and seeing what happens. Anyone have any experience with this? 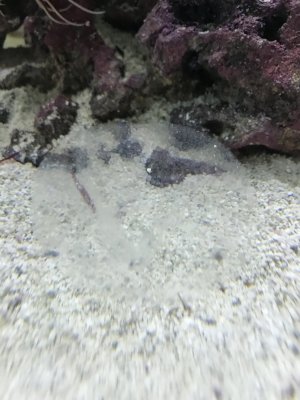 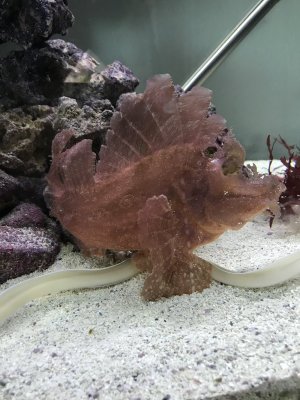 Amazing! Good luck. That would be an incredible feat to rear some.
OP

So I took the egg raft and stuck it in a net breeder, and overnight the raft disappeared and turned into just eggs. Not sure if that’s good or bad?

I’ve found one instance where Rhinopias have spawned in captivity back in 2010 at Steinhart Aquarium. Anyone know if there’s been an instance since?

What’s also interesting is the two Rhinopias seem like they’re displaying at each other now? They’ve been really flexing all dramatically, sucking in water and blasting it past their fins, showing off the big mouth, will be keeping an eye on them for sure 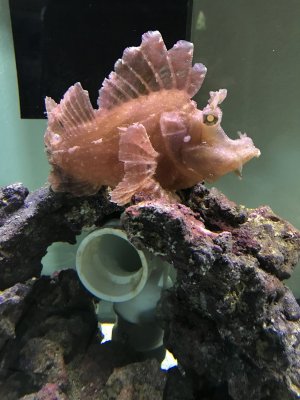 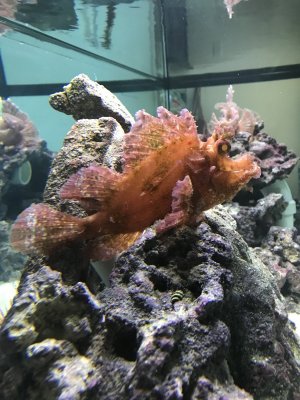 Incredible. Wonder what they feed on as new borns to juvenile and hope you have some stocked up!

LRT said:
Incredible. Wonder what they feed on as new borns to juvenile and hope you have some stocked up!
Click to expand...

Hopefully naups, maybe copepods if not? I have a supply of the first through my work. 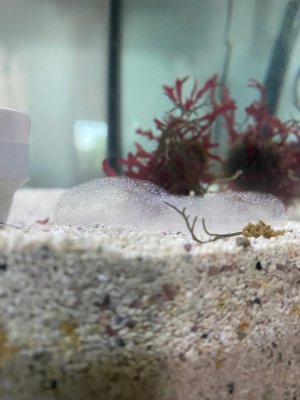 Deepdish said:
Hopefully naups, maybe copepods if not? I have a supply of the first through my work.

I honestly dont know lol that fish looks like it came back from dinosaur age. Very cool.
Let's call in a couple mad scientist propagating reefers here lol. Any advice on food or raising these little monster @fishguy242 or @Copingwithpods ?

sweet, i'm sorry not much to offer at this point..def following

That is very interesting! Good luck with rearing them!
Y

So the eggs from the first raft entirely dissipated, never saw any eyespots developing so probably never fertile.

The second raft dissolved and eggs were floating around for a couple days, but never really got the development going that I was hoping for. Probably infertile was well, despite any of the possible mating behavior that I saw.

After further research and talking to some relevant people, I’ve been able to get more info on the Steinhart Aquarium hatching in 2010. I’ve also confirmed that there have not been any other captive spawnings besides this and my own. Unfortunately, the fish hatched there never made it past a couple weeks. This was with an eschemeyeri paired with a frondosa, while my pairing is two eschmeyeri. There’s a fair amount of debate on whether they’re actually two distinct species, so lots of questions still left on that front.

I’m hoping for a third egg raft, but not expecting any viable offspring regardless. If a third is laid, I’ll be skipping the net box and throwing them right into a bare tank. Even if no larva come of any of this, it’s been an honor to do this. These are a long time favorite fish of mine, and I’m thrilled just to witness everything and be a piece of the puzzle with these creatures. 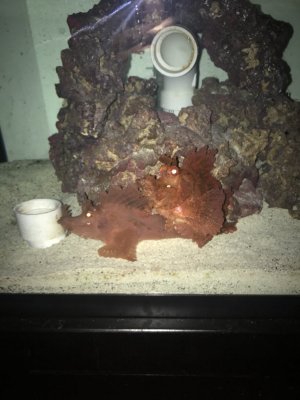 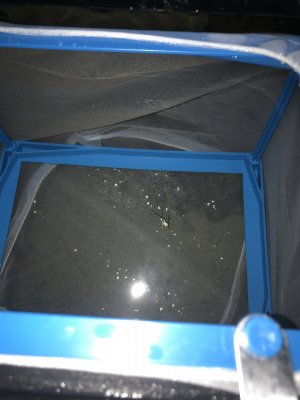 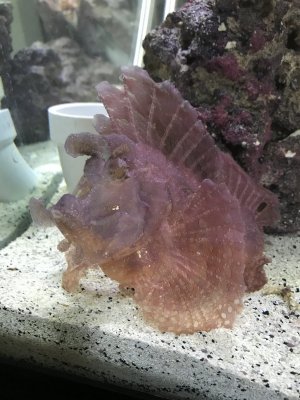 Welcome back the saga continues

Setting the scene, the pair was hanging out right next to each other for a bit and they were flirting up a storm. Spines on both were wiggling, I watched my guy gape his mouth then stretch up higher than I have ever seen before, then turn around and do what looked to me like blasting out some sperm. The female turned herself around, lingered, then swam off and I noticed she is looking MASSIVE. The last thing she ate was a little piece of shrimp so it’s definitely not food again. Stay tuned!

Pics of her big belly and bonus leaf 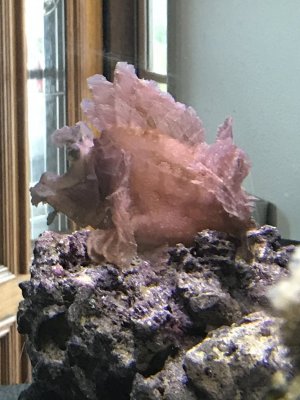 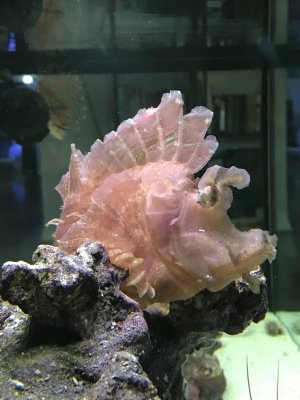 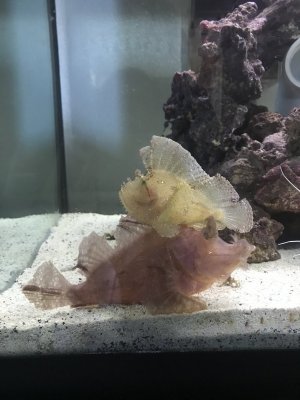 New egg raft was laid today, of course while I was taking a quick nap so I missed the exact moment. Planning to move it into a new tank tomorrow and try again

Something notable I think as well, both previous egg rafts stayed on the bottom of the tank. This one was floating when I moved it to the net box. The lone video of Rhinopias mating in the wild shows the egg raft floating away. I don’t know if this is significant at all, but it’s something! 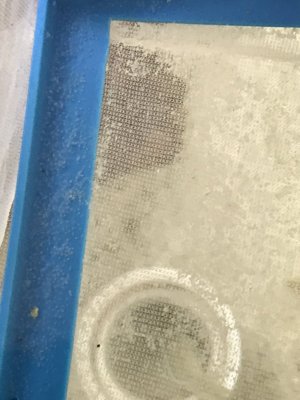 I’ve got an update, but unfortunately it’s not one I wanted to be making.

The last batch of eggs stayed intact much more than the others, but when the hatch time came there was nothing. A bunch of tiny black worms had made their way to the eggs and were likely eating some, but I’m not too sure they were fertilized to begin with.

And that brings me to the sadder part. Last night, my big pink lady passed away. She looked completely normal that evening, but around 10 pm her eyes went black instead of the classic reflective void eyes that the species has. She began struggling to keep herself upright, bellowing her mouth repeatedly, and went completely upside down on the substrate. I uprighted her, but she was dead in the morning. Still in the exact spot that I put her, but clearly dead. Maybe I’m anthropomorphizing a bit, but after I took her of the tank the male Rhinopias immediately hopped over to that spot in the tank and was looking around. There’s so little info out there that I don’t know if this happens after spawning or what, but something tells me that 3 large egg rafts in less than a month was more than enough to exhaust her to death.

My LFS that I got her from recently sent me pics of a new rhinopias they just got in, a gorgeous yellow and pink one. I’m definitely tempted, but I am in no rush to go get it at this point.

I have her body in my freezer, and plan on doing some sort of preservation. She was a wonderful fish, and I’m endlessly grateful for what she gave me. Obviously I wish this story ended differently, but thanks for coming along for the ride. Enjoy this last picture of her and her man, taken around 7 pm last night 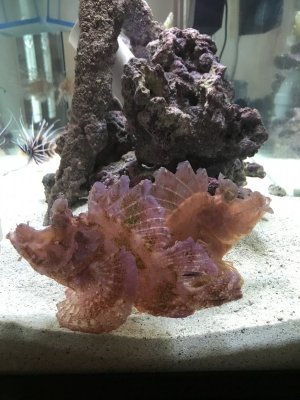 so sorry to hear,best wishes

Yeah was hoping for better outcome here. Sorry for your loss man.