In a couple of weeks my reef will will have reached 40 years old.
Unfortunately I don't remember when I was 40 but I remember when I set it up. I was a skinny 22 year old just back from Viet Nam.
It is still running very well, still using the same reverse UG filter, same dolomite substrait but none of the fish are original. The oldest one, a fireclown is just over 16, all of the older fish died in an accident that was due to my carelessness.
The tank is mostly LPS, gorgonians, giant mushrooms and a few leathers.
There are only three SPS corals, two of which have been with me for a few years and are growing nicely.
I am not sure is any of the original NSW from the Long Island Sound is still in there or any of the original amphipods but maybe much later generations.
I still can't take a decent picture and the tank is not as blue as these pictures but it is what it is. 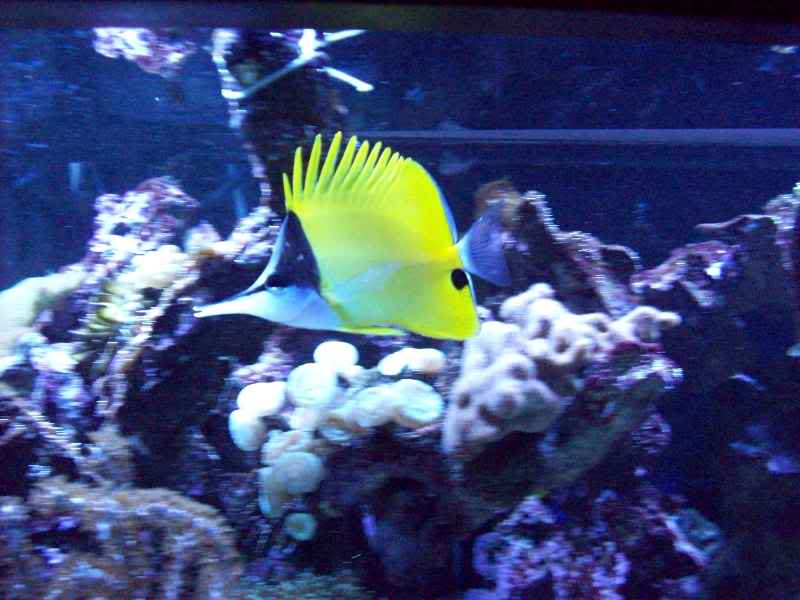 Wow I bet you have seen a lot of changes over the years in the reef business. What is the most memorable of changes in what was "the way things are done" that turned about to be not so smart?

Very cool. Not many can claim to have a tank going that long
OP

Well I never liked the idea of DSBs. They have a lifetime of about 10 years and almost all of our fish live way longer than that.
I think most people keep their tank much too sterile.
I like LED lighting but I didn't build a unit yet.
In the beginning we used regular flourescent lights, then VHO, then compact flourescents then MH, now we will all soon have LEDs.
Besides that, everything is the same except for our knowledge.

Love your little rock mover/dragon wrasse. He will change and get much bigger in time, one of my favorite fish to see in the wild in hawaii. Their swimming style is unique and beautiful even among wrasses.

Very impressive Paul. I'm coming up on 10 years on my tank but due to my age I doubt I'll have the stamina when I'm in my 70s to hit the 40 year mark.

WOW such a milestone that we all should strive for! What was it like back then trying to get rock, corals and fish?

WOW!! Thats impressive. I really like how you have the old bottles in there:wink:

Man 40 years what is your tank made out of? Have you ever needed to reseal it or anything
D

Great job..my first tank was 1978. My store had picked up some rocks on a dive were we lived in Ft Lauderdale, so he threw them in his tank. Jeez...everything did better and we had no idea why.

That is crazy...a long time for a tank. I was wondering the same as jordan3548? That is impressive the tank is in such great shape.

all i can say is wow and congrads

What can I say except WOW! Toally Awesome! Paul your a Long Island reefing legend

Congrats, that quite the accomplishment. The tank looks great. Just curious on how old the oldest fish that you have in that tank?
OP

There were no live corals then, that came 15 years later. Rock was easy. You got on a plane, went to the Caribbean, Hawaii or Tahiti and held it on your lap on the plane ride home. People just looked at you funny.
Fish came from a store like they do now but there was only blue devils, dominos and sargeant majors. Other fish gradually came later.

Just curious on how old the oldest fish that you have in that tank?
Click to expand...

The oldest fish I have now is a 16 year old fireclown. My oldest fish was an 18 year old cusk eel that I killed by accident.

LOL I bet you got some funny looks on the plane ride with the rock. Did you acquire all of your rock that way? How many trips did it take?

Man, 16 years for that clown huh. Thats amazing. I knew those guys had a long lifespan. Just goes to show that this hobby is capable of keeping things alive long term, unlike Snokel Bobs theories

40 years on a salt tank, prettuy cool I had a fresh water when I was ten that made it until a year ago 28 years? before the seal started leaking, after my wife tripped on the vacum cleaner cord and accidentally fell in to it, and I got the tank second hand at that, you rember what brand the tank is?

Paul is your tank one that has the full metal frame around it? If so how has that stood up to the salt?