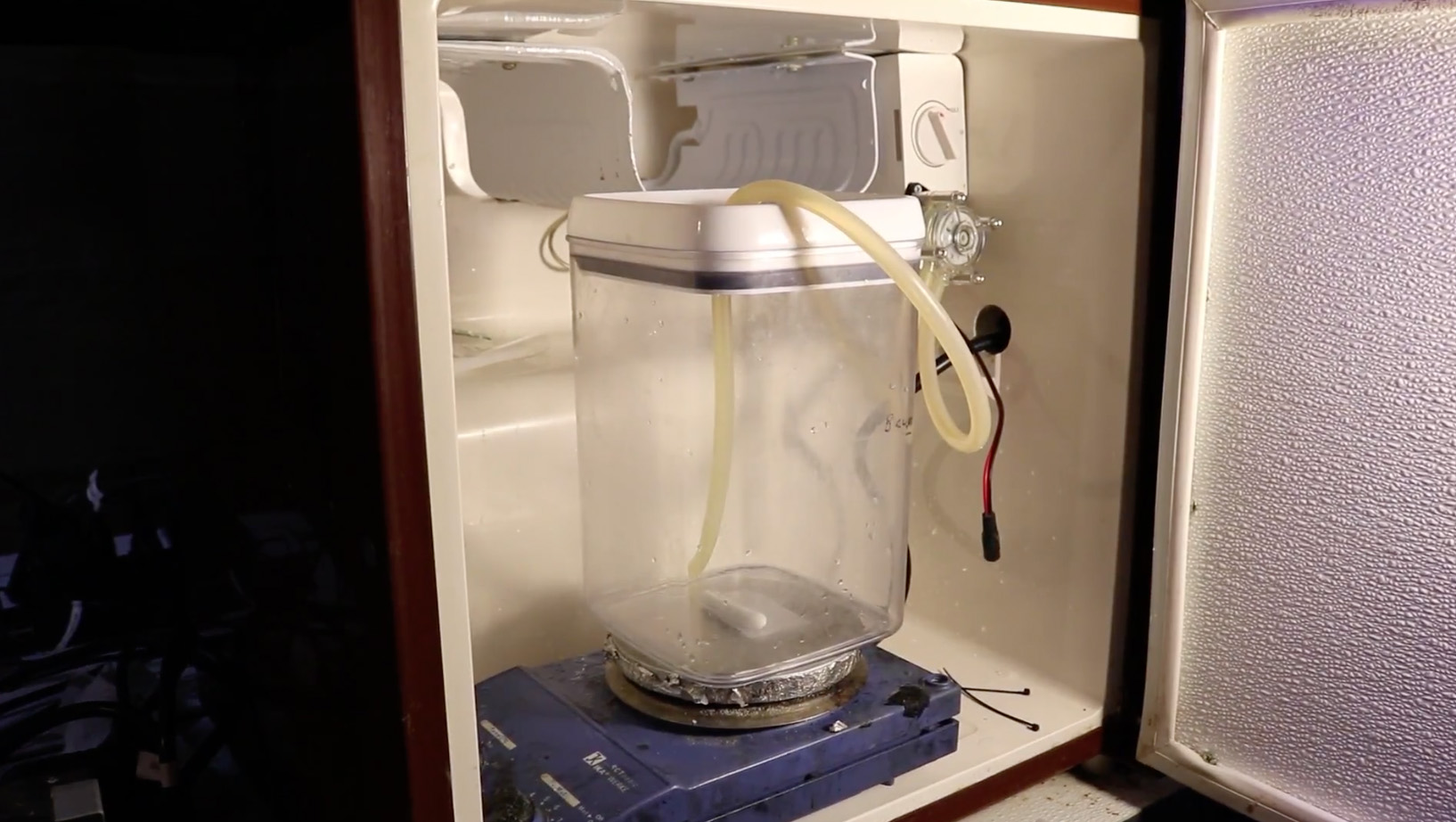 
Hey guys, so I’ve been working on this one for about a year now, and I’m very excited about finally getting this out to you. I wanted a way to automate feeding of diverse and healthy foods to both corals and fish. Dried coral food and pellet food in an automatic fish feeder are decent options, but picky fish tend not to get fed, smaller foods are hard to accurately dispense, and the variety of the food is lacking. There have been successful attempts at frozen food dispensers, but they are too complex for my taste. So I made a refrigerated food feeder. The hardest part of this by far was getting the preservation of food done properly. This first video is going to cover the mechanical components, and in the next I will do the food. What I ended up building is similar to other designs, but is different in a couple of important ways.

I produced my version for under $50 with easily found parts, while the best other version I have seen by Aquabacs cost him $450 without the fridge. The most notable design difference between this and other designs is a peristaltic pump that has 6.8mm ID tubing instead of 1.67mm tubing, increasing the size of deliverable food.

Keeping the food cold is of vital importance, as this is one of the best preventers of food degradation. It is really important that the food be as close to freezing (without freezing) as possible. For this reason most Peltier based refrigerators will not work. I used a really old mini fridge I had laying around, and after the world’s most disgusting cleaning and replacing the door panel with a frp panel to get extra room, it was good to go. However I have this setup in the basement, where noise from a refrigerator compressor is not a concern- If that is a problem I recommend an absorption refrigerator. These are the type generally used in hotels because they are nearly silent but are still energy efficient and capable of freezing.

Option 1: a stir plate. I used a laboratory stir plate that I had. If you search for a diy stir plate, you should be able to find something that will work for a low cost. They also sell ones on ebay for $40 if you don’t feel you have the skills or want something more polished.

Option 2: an airline to the bottom of the storage container, without any air stone- the airpump should be placed in the refrigerator. This will probably result in faster oxidation of the food than a stir plate and a poorer stir.

Option 3: Sodium Alginate- what commercial products use, you’ll have to do your own research on this. My guess is that this will still need occasional shaking.

The feeder works by taking water pumped from the sump/tank, and passing it through a tee fitting located just outside the refrigerator. Into the feed side of the tee, a large volume dosing pump dispenses the food.


To build the feeder you need:

1. Feed line from a dedicated pump or from a manifold off the main return pump (I made mine ½ inch). There are also a couple designs running around that use a DOS to back flush the line with tank water and skip the feed line. This design has some clear flaws, most notably the contamination of the food with tank water, and while the diameter of dos tubing is thicker at 3.33mm, that is not even close to 6.8mm. Hypothetically, one could run two power supplies to the larger peristaltic pump to back flush it just like a dos, but it really is a poor solution.

2. A tee and three barbed fittings. I would not recommend a venturi injector like this (which I initially tried), the ports are just too small and easily clogged, and gives you a false sense of security- it won’t do anything in case of lost power or a blockage. These can all be found at your local home improvement store.

4. A high flow peristaltic pump- this is a cheap knock-off of a masterflex- you could buy a masterflex, but they are not always available or cheap. I used it over a masterflex because it was more compact, which was important in a minifridge. ($30) (http://www.ebay.com/itm/12V-Large-Flow-Peristaltic-Pump-Tube-Dosing-Vacuum-Aquarium-Lab-Analytical-Water-/401222703897)

5. A way of controlling the peristaltic pump. A digital timer ($13)(https://www.amazon.com/WenTop-Programmable-Energy-saving-Household-Appliances/dp/B010AH61G4) or a reef controller

6. A food safe container that is air tight. I found one at Walmart. This is one of the safeguards we are building into the system to prevent flooding. If this feeder is going to be in living spaces I recommend having the food storage above the sump water level.

First, we need to prep the refrigerator. We need to cut holes in the fridge for the power to the peristaltic pump and stir plate, as well as the silicon tubing. Position everything in the fridge and then drill the holes. Drilling through a fridge can be risky- there can be coolant lines or wires that could be severed. I recommend drilling very carefully just through the plastic inner sheathing, then removing insulation by hand, then drilling through the outer sheathing.

Then take your air tight container and drill a hole slightly smaller than the silicon tubing, so that when inserted it seals itself. Then take apart the peristaltic pump head, and replace the short piece provided with the full length of silicon tubing. This reduces the number of failure points and places that catch food particles by 2. Then insert the feed hose into the food container, plug in the pump and stir plate, attach the silicon hose to the tee, attach the too and from lines to the tee, position the outlet where desired, and program the timer to turn on the peristaltic for the required time. I decided I wanted 20ml of food slurry pumped 4 times daily (I have a heavily stocked 180 with frag tank and was replacing all other feedings). So, I took a smaller container with 80ml of slurry and timed how long the system took to empty the container, then divide by 4 to get the number of seconds to turn the pump on for. That’s it! I think this system has the potential to greatly increase coral and fish growth and health, and allow those of us this busy lives to keep some of the organisms we have previously had to avoid. I know personally this has allowed me to keep non-photosynthetic gorgonians and a copperband butterfly, ans well as healthier corals.


Making your own food means not using premade food by reefnutrition or others (which is a great product, but is an expensive product- apparently up to $70 per bottle). I have been using this homemade, automatically dosed food for over a year. Any frozen food or DIY fish food recipe will work, I based mine off of this one (http://www.melevsreef.com/node/1616) and included Mysis, baby shrimp, pellet food, nori, scallops, mussels, Cyclop-Eeze, spirulina, silversides, reef chili, and anything else I could find that looked good. Your local Asian grocery store is your friend here. The one food I do not recommend is squid and octopus—not only are my fish not really a fan, but it is harder to grind into uniform sizes and it tends to somehow congeal when stirred into these balls of squid tissue that are really tough and block the pump intake. Just avoid them, they are a serious pain. Initially I blended the larger ingredients in a food processor, and tried to strained it through a mesh to remove and reprocess anything larger than ~1/8 inch- this worked but not well. If you have a meat grinder I highly recommend it. Any grinder will do- seafood is not hard to grind like pork- even a hand grinder will do. Otherwise you tend to end up with large chunks of certain foods and obliteration of other foods. I guess if you just meant to feed coral you could just puree it. I used a fine grinding plate and let the food just start to thaw- about 30 min in cool water before grinding. Cooling your grinder in the freezer is also helpful. I then add mysis, shrimp and other smaller ingredients that did not need to be reduced in size. I freeze this into blocks that last me about 2 weeks. A few months of food takes me about half an hour to make and can cost under $10- I always end up adding in more expensive ingredients though. One should keep in mind the nitrate/phosphate balance when using any homemade food. I tend to have a lot of herbivores in my tank, and to keep them healthy I use a lot of phosphate rich foods (ie seaweed). Generic shrimp also have more phosphate than Mysis shrimp. The list goes on, but if you already have a nitrate deprived system, this kind of feeding can quickly push you into running a lot of GFO or finally breaking down and starting to dose nitrates, which is what I am going to start doing.

This is the most important step- unpreserved fish food will go bad in far less than a week, depending on starting ingredients and temperature. The preservatives here were carefully chosen with the help of several university faculty with degrees in food science, but this was a little out of even their wheel house, so they are high but safe usage dosages. This recipe is just a baseline, but I have tested this version and had an edible product for 3 months, although I suspect some of the nutritional value was lost by that point. The largest additives, citric acid and ascorbic acid are both used in reef tanks for other reasons in quantities much higher than we are talking here. Calcium proprionate and sorbic acid are used in other commercial aquarium foods, and I have not had any negative effects, although I am not sure what I would even look for. Even so, these are mold, yeast, and fungi inhibitors, and not completely needed unless you want to keep food for a month or more. I have actually cut my additions in half, and may reduce them further, as my container size means I have to make new food every 2 weeks. If you would like to understand better why we are using what we are using, I can point to towards some resources, just ask.

Citric acid (to acidify-- most bacteria we are worried about do not reproduce under a pH of 4.5-- and as an antioxidant): .5% by weight

Ascorbic acid (vitamine C, for stability): .5% I use pills and grind them because it is cheap and easy to measure.

Calcium Proprionate (Mold inhibiter): .1% (may want to cut this in half or more)

One important caveat - it is super easy to overfeed with this system, and while this food is not as nutrient dense as straight flake or pellet food, it can quickly overwhelm a tank. This is of extra concern because one of the main reasons one might implement this system is to care for corals or fish that need multiple feedings per day to thrive (like non-photosynthetic corals, fish fry, or picky fish- I wanted both a copperband and non-photosynthetic gorgonians). As such, I highly suggest an effective particulate nutrient export method. This kind of system more closely reproduces the reef environments we are replicating, with a high turnover environment. Good flow within the tank with no dead spots, so that particulates stay suspended, as well as some sort of mechanical filtration to remove particulates before they break down are important. A rollermat, a diy rollermat (http://www.reefcentral.com/forums/showthread.php?t=2552341), or the new dream boxes (http://www.reefcentral.com/forums/showthread.php?t=2614456) would be excellent, low maintenance choices. I have also found I have to blow off rocks far more frequently, but these are general problems associated with broadcast feeding.
Share:
Facebook Twitter Reddit Pinterest Tumblr WhatsApp Email Link