Ricordea yuma - A Joy to Own

Article Gallery (10) Discussion (9)
Leave a rating
Ricordea yuma - A Joy to Own
Albert Thiel
(reprint from R2R thread - January 14, 2013)​
Often referred to as "Yumas", these are not true corals and not true anemones either, but somewhere in between a mushroom and an anemone. Hence the many common names given to them that may include several names of species they do not really belong to. I have seen so many different ones that it is sometimes hard to even associate the common name used with what the life form really is. But so much for that. Best is to refer to them as "Yumas", and everyone who has been around for a while will know exactly what you are talking about.

R. yuma comes in many different colors: reddish, brown, blue, yellow and so on, as can be seen in the images below. They can grow up to 4 or more inches when fully expanded, and reproduce in a number of ways: dropping “babies” off the main Yuma, or by splitting a small portion of their foot (pedal disc) off, that eventually grows into a little Yuma and keeps growing to become a larger and larger one. An image of such reproduction is shown below as it happened in the Author's 20-gallon Tank.

They are some of the easiest corals to maintain, as they are not particularly demanding on the water quality, although of course the water chemistry cannot be totally off from where it should be or the R. yuma will not expand and will certainly not open up. 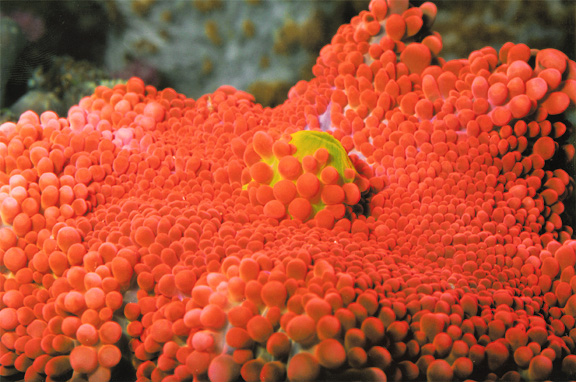 A gorgeous looking specimen. Note that the more colors are present, the higher the price will be. 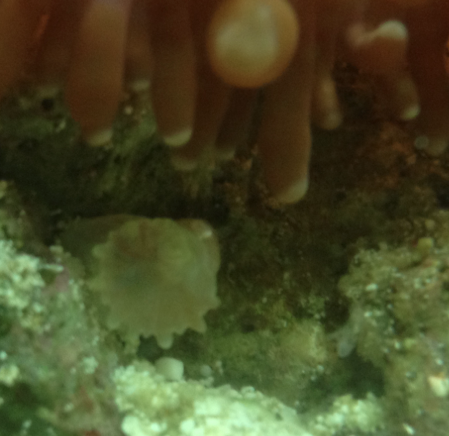 Notice the baby Yuma at the bottom to the left (in Author’s Nano-Reef). First sighting of it
Due to the macro shot, and the fact that my tank is a standard 20-Gallon, and not made with
Starphire glass, the green tint has been accentuated quite a bit in the image above


Yumas can be are very forgiving of water quality as in nature they are often found in turbid waters. However it may take some time for them to acclimate themselves to your Nano-Reef’s conditions, and it is best therefore when you get a Yuma to drip acclimate it for an extended period of time before adding it to your tank. Conditions in your Nano-Reef are likely to be far better than where the R. yuma came from, but even though in the wild it can live in turbid waters, it does not do so all the time as around the reef water is replaced all the time and may be turbid and nutrient laden for a while, only to become far more pristine a few hour later.

As a result of the changing environment it is therefore recommended that you do acclimate your R. yuma to our tank conditions and so so for a fairly long period of time. In fact my two large ones where acclimated by the drip method for well over an hour, making sure that the temperature of the water in the acclimating vessel did no drop.

Another reason for acclimating, and a different one, is if you are using strong lighting over your Nano-Reef, a condition the Yuma you acquired may not be accustomed to. You may Therefore wish to place the Yuma, or Yumas, in an area that is not in full light, and gradually move the Yuma in a little more light, so it gets more intensity. Yumas will adapt to stronger lighting, but it is best slowly, at least in my experience. 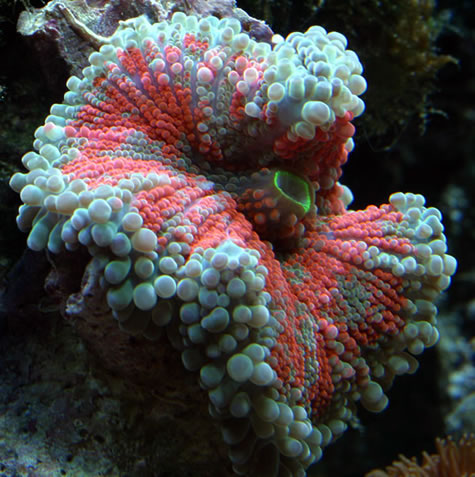 
Water current should be in the medium range, but I have seen them do real well even in stronger water flow areas. The only issue with placing them in strong current is that they will be swept up and down, and if not attached properly to a rock or the substrate yet, they will start to float around, which is definitely something you need to avoid from happening. Start off with a somewhat low current and gradually increase it a bit once the Yuma is properly attached to a piece of rock or the substrate. Although they do not need to be in the lower part of the Nano-Reef, they appear to do pretty well when placed low in your tank. Note that once the Yuma has attached itself to a larger rock, you will need to be very careful if you try to move it as it will not come loose from whatever it is attached to very easily, and when trying to move it you must be real careful not to damage its pedal disc, as that could lead to a tear in it and possibly and infection setting in so be aware of this and make sure you do not try to pull your Yuma off such a rock. If, however, it is attached to the substrate it will be easier to move it as when you lift it up, whatever is attached to the pedal disc will not damage your Yuma as the sand or whatever it has attached it pedal disc to will come loose at the same time as you lift it up and move it.


Ricordea yuma also sometimes goes by the name of Ricordea "False coral" but that can be confusing as there is another Ricordea that is also given that common name: Ricordea florida.

Because of the very large number of Yumas, and the colors they may show some can be quite pricey, especially the specimens that have more than two or three colors. By size they can certainly be considered as really expensive corals.

However a lot of Hobbyists acquire their Ricordea specimens from other Hobbyists or at swaps at Aquarium Clubs, or trade some of what they have for Yumas with other Hobbyists on Forums that are members of. That is certainly a good way to acquire a number of them without having to lay out larger sums of money. I recently saw a multi-colored one being offered for sale for close to $200 and less colorful ones for around $100, whereas R. florida typically goes for anywhere from $30 t0 maybe $40.

Ricordea yuma has very few known predators, if any, making it a fairly long-lived coral in any Nano-Reef as long as it is properly cared for. It is photosynthetic and benefits from your lighting, but it can be fed additional foods by spot feeding them by the mouth opening that is raised and circular in shape. Even if the foods are on the knobby surface it will move the food items to its mouth opening, slowly but surely.

This coral-like organism (Corallimorph) has the same structure as an actual coral but no skeleton. It has a column and a base (pedal disc) which is what it uses to attach itself to a rock or to the substrate. The column is very short. When the Yuma is wide open you will not be able to see either of them, unless the body is raised due to the water flow and swings up and down. 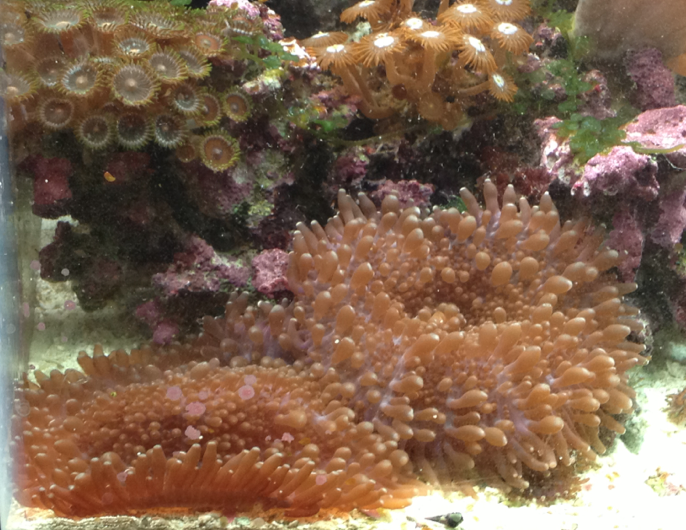 Two Yumas in the Author's Tank. For size comparison look at the Yumas and the Zoanthids above it


As long as your water quality meets the general accepted parameters for Nano-Reefs, your Yuma corals will do just fine and may even reproduce, as one did in my 20-gallon tank, as can be seen in an earlier picture and the image below. The one you see below split off the pedal disc of the larger one and developed into what I now call a "Teen Yuma". I also have some that were thrown off a babies by the same Yuma and which can be seen on other images below. So basically your R. yuma can reproduce in both manners, although many say this does not happen, I guess that is not correct since in my aquarium it did reproduce in more than one way. 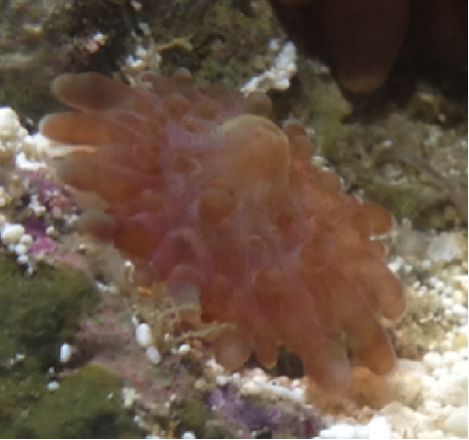 
Yumas are considered semi-aggressive and can sting nearby corals so keep them at a distance from other ones. Of course the reverse applies as well. Do not place it too close to other corals that can sting your Yuma, especially corals with sweeper tentacles, and remember that some of those have sweepers that can extend pretty far (up to 6 inches for some). Remember too that Yumas can extend themselves a great deal and that it may look small at times but can expand to several inches, usually later in the photoperiod. It will start the day as a totally shriveled up looking one but as photosynthesis starts to work it will gradually expand and become larger and larger. 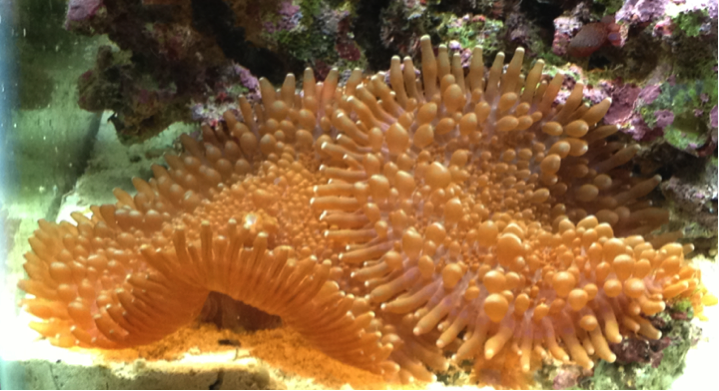 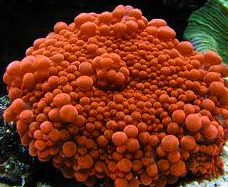 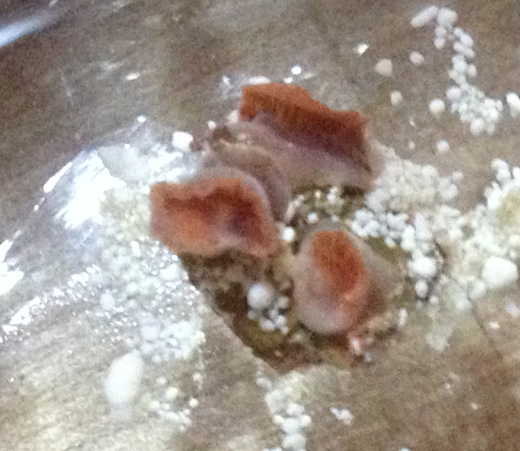 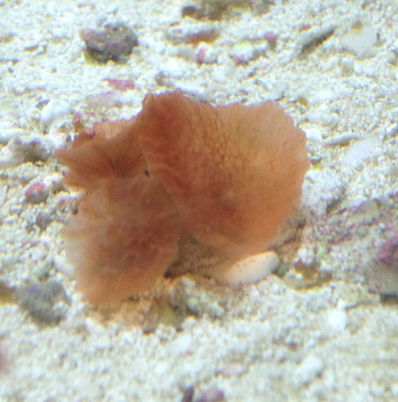 The Babies about 2 weeks after first seeing them. Nice growth
It appears that there are 3 there although it is not easy to see in the pic.

Should anyone have questions about Ricordea yuma and their care or propagation, feel free to post to my thread here on the forum or in the comment section in this article

• Ricordeas are discussed in great detail in my new book " Nano Reef Aquariums "
• For info on ordering at the pre-pub price go to NanoReefAquariumsOrdering
Reactions: Mystersynyster, SouthWestSalt, @[email protected] and 1 other person

alberthiel
Albert J. Thiel owner of Thiel Aqua Tech until it was sold, Author of a number of books on Reef Aquariums