The Harlequin Tuskfish – All Dressed Up, but Anywhere to Go?

Article Reviews (5) Gallery (1) Discussion (16)
Leave a rating
The Harlequin Tuskfish – All Dressed Up, but Anywhere to Go? 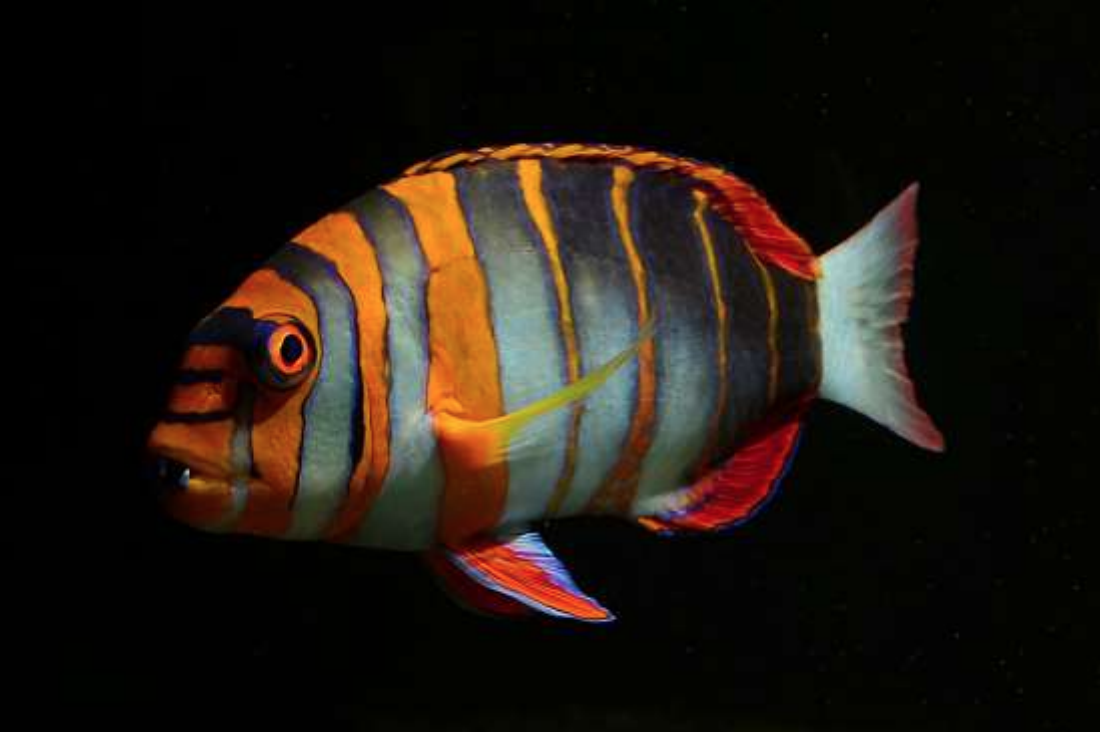 Arguably one of the most colorful Pacific reef fish, the harlequin tuskfish is often the premier subject for underwater photographers, and is commonly used as a subject by artists who portray the coral reef environment in their work. However, in captivity, this species has always received mixed reviews and is not always quite as popular. Home aquarists often anguish over their decision to purchase one of these fantastic fish for their aquarium. Beautiful but pricey, peaceful yet sometimes delicate, deciding to acquire a harlequin tuskfish is not always an easy choice. Opinions abound regarding their suitability for aquariums. This article attempts to address these questions in order to arm the home aquarist with better information so they can make a more informed choice about their prospective purchase.

The Harlequin tuskfish, Choerodon fasciatus, (occasionally still referred to by its older name, Lienardella fasciata) is a member of the family Labridae (the wrasses). Closely related to hogfish, there are about 25 species of tuskfish in the genus Choerodon. The slimmer, white and blue Jordan's tuskfish, Choerodon jordani is the only other species of the genus that is routinely collected and sold for the home aquarium trade.

Harlequin tuskfish reach a maximum length of around 35 cm (11 inches), although they are typically imported at less than half that size and rarely grow longer than 8 inches in captivity. They have a sporadic distribution throughout the tropical Western Pacific Ocean, including Japan to Taiwan and Queensland, Australia to New Caledonia. Their preferred habitat is the seaward side of reefs at a depth of 5 to 35 meters. In the wild, harlequin tuskfish are reported to feed on crustaceans, worms, mollusks and echinoderms (Fishbase 2006).

The gnarly, protruding teeth possessed by tuskfish give many people the mistaken impression that they are powerful predators, able to attack and kill many other animals. In reality, these fish behave more similar to the distantly related, more peaceful parrotfish. The only difference being that rather than feeding on algae and coral polyps as parrotfish do, harlequin tuskfish prefer to feed on small invertebrates. Tuskfish are territorial with one another, so in home aquariums (less than 500 gallons) the general rule is to keep only one per tank. Normally, this species is not considered safe for mini-reefs due to its penchant for feeding on small invertebrates such as starfish and shrimp – sometimes turning over small rocks in the process. Still, enterprising aquarists that have mini-reefs comprised predominantly of stony or soft corals will find that a tuskfish a compatible choice. In all cases where the compatibility of an animal is not assured, you should always have an alternative plan to house it in the event the fish does not work out.

Harlequin tuskfish have no unique husbandry requirements in terms of water quality, but it is always best to try to match an animal’s natural environment. A water temperature of 76 to 81 degrees and a specific gravity of 1.021 to 1.025 will suit these fish just fine. Tuskfish have large, delicate, cycloid scales, and this means that they are more prone to developing protozoan infections such as saltwater ich, Cryptocaryon irritans than are some other species fish. Many other marine aquarium fish share this trait, but tuskfish also happen to be fairly sensitive to the most effective means to treat this disease – chelated copper sulfate at a full concentration for 30 days. One alternative treatment, hyposalinity (low salt content) can result in the proliferation of another protozoan parasite, Uronema which thrives under such conditions. Additionally, harlequin tuskfish are obligate reef dwellers, and this means that their physiology is not well-adapted to changes in salinity and they do not always handle low salinity treatments very well.

Unlike many other wrasses, harlequin tuskfish do not bury under the sand at night. They do however, require a secure cave to retire to at night (or during the day if they are frightened). They also require substantial open water for swimming during the times that they are active. Most meaty seafoods of appropriate size are accepted readily by healthy tuskfish. Krill, mysid shrimp, and small bits of diced fish flesh are all good things to offer. A more varied diet can include diced clams, shredded squid and prepared gelatin diets.

In some instances, aquarists will find this species offered for sale under the name “blue-toothed harlequin tuskfish”. This is normally meant to signify that the fish was collected in Australia. These fish tend to be larger, and are more colorful. In particular, the coloration of their teeth is deeper blue (although this may just be a function of their larger size). Reports are that these Australian fish are collected with barrier nets or by barbless hook. Contrasted to collection techniques often used elsewhere (such as the use of sodium cyanide), tuskfish from Australia are obviously favored over those from other regions. Handling prior to their shipment is also reported to be better in Australia than in other areas where these fish are collected. There is however, the underlying suspicion that any colorful large tuskfish could be labeled as a “blue tooth” specimen (regardless of its collection locale) in an attempt to receive a premium price for it.

So, what kind of longevity should a home aquarist expect when purchasing a harlequin tuskfish? Obviously, the initial individual condition of the fish is so important, that this takes precedence over all other variables. Using historical records from the Toledo Zoo, eight fish acquired during a ten-year span from 1990 to 2020 were examined. Two of these fish were confirmed to have originated from Australia, all were about 3 to 4” in length when acquired, and most of the others were likely collected in either Indonesia or the Philippines. Of this group, two did not survive a standard sixweek quarantine process that included an ionic 14-day copper treatment at 0.20 ppm. One died after three months, one died after five months, one was killed by a tankmate at 8 months, while one lived for almost two years. The two Australian-collected fish are still alive after six years. This data seems to indicate that one should not expect their new non-Australian harlequin tuskfish purchase to be as hardy as might be expected. These losses do not point to a single cause, but rather, seem to show a multitude of problems with this species of fish. Other aquarists have reported that once well-acclimated, their tuskfish have thrived for many years. Obviously, harlequin tuskfish can live for many years in the home aquarium – but aquarists must be aware that there can be difficulties with a relatively high percentage of newly acquired specimens. This is not a unique feature of this species. Some other marine aquarium fish show similar trends: Table one lists a number of marine aquarium fish (including the harlequin tuskfish) that seem very hardy at first, but which long term survivability in home aquariums is definitely not assured.

There are many reasons why these seemingly hardy fish may not thrive in captivity, and in some cases, the problems keeping the species are simply not known. Confounding this issue are reports from some people who have no difficulty keeping individual specimens in their aquariums. This differs from truly delicate species such as pinnatus batfish, orange-spotted filefish and coral-eating butterflyfish that never really do well in captivity for anyone, despite the level of care given them. Of course, even hardy damselfish and clownfish will fail to thrive if not given proper conditions, but many times, the fish in table one do not live long, even when they are given proper conditions.


Table 1. Some marine aquarium fish that SEEM very hardy at first, but that may have issues that make them unsuitable for beginning aquarists.​