Article Reviews (1) Gallery (5) Discussion (10)
Leave a rating
A reef tank is a complete ecosystem operating with clockwork precision in a space of extraordinarily small dimensions compared to nature. As a result, the water chemistry fluctuates at a dizzying rate, implying a strategy to compensate for these changes in a sustainable manner. The export and reduction of inorganic nutrients is one of the biggest challenges in reef aquarium maintenance. Techniques have evolved over the years from a perspective focused on simply extracting as much as possible, to more efficient and reasonable approaches based on recycling. These are the modern reef aquariums, set up with live rock, denitrifying media and organic carbon addition. This article describes three techniques considered “traditional”, but not for that reason, less effective: Water Changes, Refugia and Deep Sand Beds.

Water changes are the oldest and fastest remedy available to solve this problem. For decades it has been used extensively as a fundamental tool for aquarium maintenance, but with the development of modern chemical additive and nutrient reduction techniques, it has become less frequently necessary.

The benefits of water changes are formidable, for example, decreased nitrate and phosphate concentrations, removal of excess organic matter, export of biological toxins, calcium and alkalinity replenishment, pH regulation and trace element replenishment. In small aquariums, they are sufficient to provide all trace elements that has been consumed, while nutrient export systems and calcium and alkalinity supplements do the rest. However, they also have some drawbacks that need to be considered, especially if large volumes are involved.

Any abrupt variation in the parameters of an established aquarium is a potentially detrimental stressor. For this reason, it is advisable to perform water changes in such a way that the impact is as small as possible. A suitable routine is to replace small volumes of about 5%, weekly, or larger volumes of about 15% or 20%, monthly. There are emergency situations where there is no choice but to perform large volume water changes, for example, when ammonia concentration rises above toxic levels.

In aquariums with high nitrate and phosphate concentrations, before implementing some nutrient reduction techniques, it is necessary to perform water changes to bring the system to a “manageable” state. If this first reduction is not done, it is very difficult to reach the desired situation with in a reasonable time. So, before using phosphate absorbing media or artificial organic carbon, a water change can be done to reduce inorganic nutrient concentrations below 15 ppm for nitrate and 0,2 ppm for phosphate, respectively.

Water changes allow us to quickly decrease the concentration of any dissolved substance in the aquarium, nutrients, toxins or even the dissolved salts themselves. For example, if we want to decrease the salinity of the aquarium from 37 gr/l to 35 gr/l, we can do it by diluting with fresh water. To find out what volume of seawater we need to change and the number of changes needed, the following mathematical formula can be used: 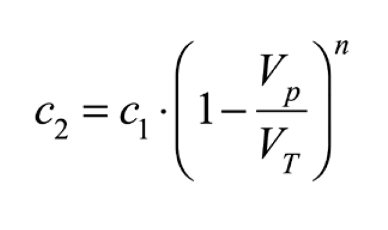 For example, suppose we have an aquarium of 450 liters volume, with a nitrate concentration of 10 ppm. To determine how many changes of 100 liters would be necessary to reach 2 mg/l, we apply the above formula, obtaining the result of 6.4 changes. This gives us an idea of the effort and cost of the synthetic salt needed.

The following figure shows a graph relating the number of water changes as a function of the volume of each partial change, for this particular case. 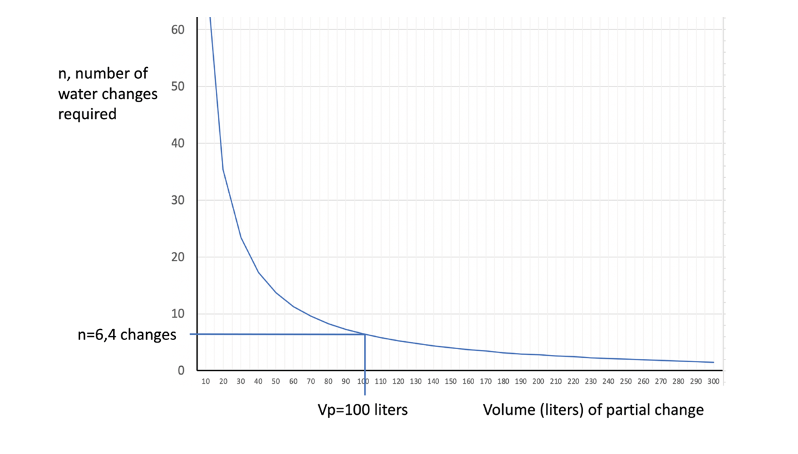 When a coastal zone is declared a marine reserve, there is a significant increase in biological diversity beyond its geographical limits. A large number of species that have a new environment, free from human pressure, reproduce and migrate outwards in search of new opportunities. As a consequence, the volume of fishery catches in nearby areas increases. In a reef aquarium, a refugium serves the same function. It is a safe space that shares the same water with the display aquarium where fish and invertebrates do not have access. Within such a space there is no predation pressure on the plankton, which can spread more easily. The refugium is usually installed inside the sump or in a smaller tank equipped with an overflow and connected to the main aquarium by a second return pump.

Using a separate tank has the advantage that it can be disconnected at any time without major complications. Properly maintained refugia are an element of extraordinary interest to the aquarist and provide remarkable benefits to the system, however, certain advantages of questionable effectiveness are attributed to them, for example, the reduction of unwanted algae during the cycling and maturation period, or the tank´s pH stabilization by means of an inverse photoperiod.

The plankton transit from refugium to display tank provides a small continuous source of live food for corals, fish and invertebrates. To establish the initial population, recently imported live rocks can be added, preferably uncycled if they are small in size. Subsequently, a periodic supply of phytoplankton will facilitate the feeding and propagation of various species of zooplankton, providing biological diversity to the aquarium food web.The refugium tank should ideally be placed above the display aquarium, to avoid that part of the planktonic organisms die when passing through the return pump. The water feeding the refugium should be collected away from sump areas where chemical additives or ozone are added.

A refugium can be used for nitrate and phosphate reduction by growing macro algae. Algae growth involves the removal of these two inorganic nutrients, lowering their concentrations in the system. Regular pruning removes excess algae, which can be given to other aquarists for the same purpose. It is not appropriate to feed them to fish, due to the possibility that they may have assimilated pollutants, such as heavy metals. Algae grown in this way require some availability of inorganic nutrients, so they will not work well in tanks with very low levels of nitrate or phosphate, for example, ultra-low nutrient systems (ULNS). 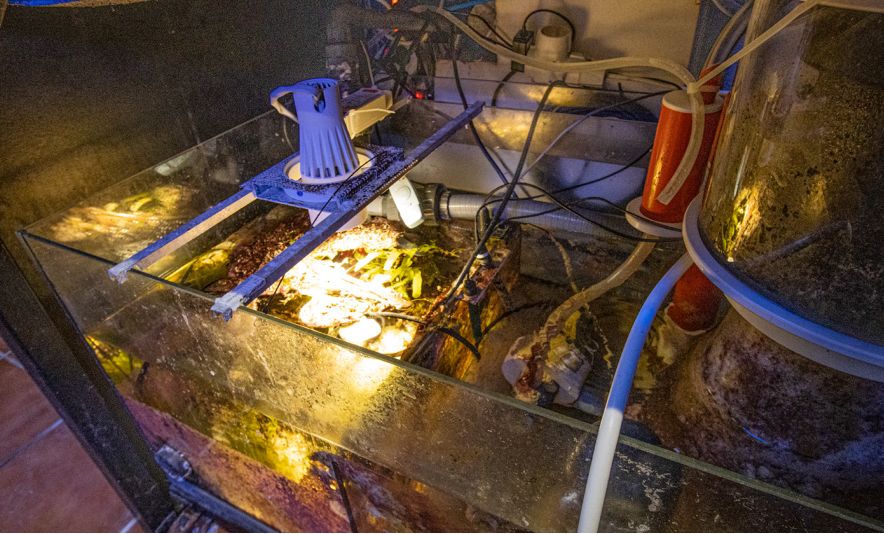 A refugium inside the aquarium sump receives water from the downstream pipes.

There are some species of algae that are not suitable for use in refugia, because they transfer nutrients to the water in some situations. For example, the species Caulerpa racemosa, Caulerpa prolifera or Caulerpa taxifolia, can ego into sexual reproduction and release the reproductive packages, dying later. The effect is a sudden increase in organic matter, nitrate and phosphate, with detrimental effects. Caulerpa was widely used in the past, but has been replaced by more suitable species, such as Chaetomorpha, which grows easily without risk of contamination,

In a refugium not only macro algae can be grown, but any type of organisms that are compatible with the tank water chemistry. A very interesting contribution can be live rocks with sponges and other filtering invertebrates, which benefit from the plankton produced. Also, corals of very easy propagation, which we do not want to introduce in the display tank because of the possibility of generating a pest, for example, some Actnidodiscus or Xenia. If the refugium is large enough, it can also be used as acclimation tank for new fish, which, being separated from the rest, can quietly recover from stress without harassment or competition. This makes the transition from frozen to dry food easier.

A DSB, or deep sand bed, is one of the most interesting ecosystems that can be maintained in reef aquariums. They have been used for decades until other nutrient reduction systems, such as organic carbon sources, replaced them. The theory behind their operation is fascinating, although they do have some limitations and risks that need to be considered.

To build a DSB, a layer of fine sand of considerable thickness is placed at the bottom of the aquarium, so that the deep areas are not subject to water circulation. This sand bed, with a minimum depth of 15 to 25 cm, is colonized by bacteria, unicellular algae and small benthic invertebrates, such as polychaetes, amphipods, copepods and nematodes, which feed on carrion and organic debris. These organisms are known as interstitial fauna, meiofauna or infauna. To promote biological diversity within the sand, it is advisable to use a mixed granulometry, combining “sugar size” with 30% finer sand.Within a DSB, a gradient in oxygen concentration is established with depth. The surface zones, where nitrification processes predominate, are completely aerobic. Further down, in the anaerobic zones, oxygen is scarce and organisms use nitrate for respiration. All along the way, communities of nitrifying and denitrifying bacteria are established, completing the nitrogen cycle in both directions.

To properly function, a DSB needs to have a population of tiny invertebrates and microorganisms to recycle the organic debris deposited on its surface. The resident microfauna stirs the surface layers of the sand, contributing to its oxygenation to maintain an aerobic environment. Copepods and amphipods feed on cyanobacteria, diatoms and dinoflagellates, limiting their settlement. Some suitable species are detritivorous bristle worms, e.g., Cirratulidae, Amphionomidae or Phyllochaetopterus and Chaetopteridae tubeworms.If the sand bed microfauna is not well established, decaying coarse organic matter, too large to be recycled by bacteria, will accumulate. Excess ammonia, nitrite and nitrate will then stimulate the growth of unwanted cyanobacteria and diatoms, collapsing the sand bed. The buried areas of decomposing organic debris are known as “nutrient bombs”, because if for any reason the sand is disturbed, ammonia, nitrite, nitrate and phosphate will be released back to the aquarium water.

As a reference, a DSB needs about three months to be fully operational, so it is necessary to integrate it into the general dynamics of the tank maturation. Until stability is reached, we should not allow excessive organic matter to accumulate on the sand surface. It is very important not to introduce animals that prey on the micro fauna, because they would destroy the sand food web, disabling the recycling capacity.Examples of non-compatible animals are Archaster typicus starfish, sand dwelling gobies, sea cucumbers and carnivorous hermit crabs. These invertebrates can play a beneficial role in maintaining a decorative sand layer, with a thickness of a few millimeters, but should be avoided as part of the cleaning crew when maintaining a DSB.

Because of these limitations and the relative difficulty in achieving robust biological stability, it is safer to install DSBs inside a remote tank (as a refugium), so that they can be disconnected from the overall system if necessary. 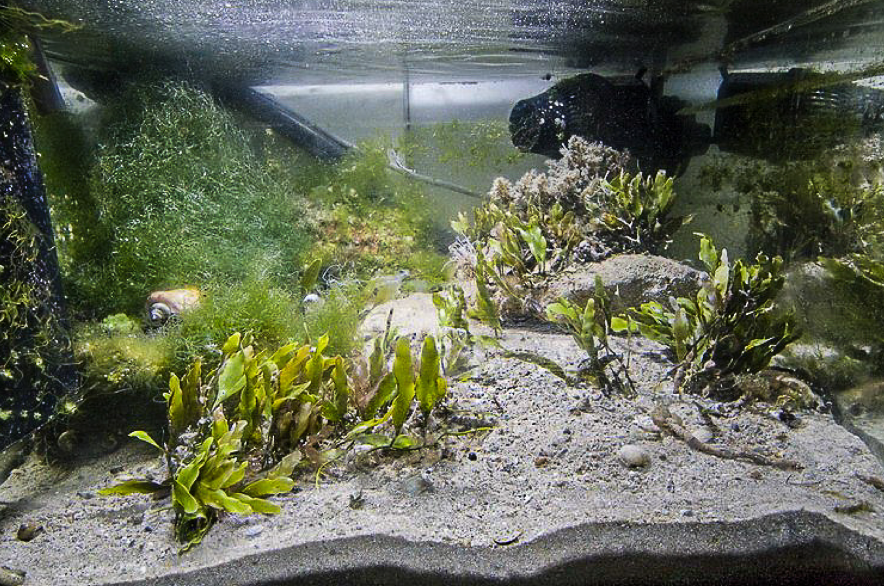 Refugium with a DSBs located within the sump of a reef tank. The algae Caulerpa prolifera and Chaeotomorpha are cultivated.
Reactions: ajsud, Kitjo, Cool Fish and 12 others
About author

Beuchat
Angel Cegarra is the author of the book “Reefkeeping Fundamentals”, where he presents a fascinating journey through the science and technology that govern life inside a reef tank. From nutrient recycling processes, through coral biology, project initiation, feeding techniques and maintenance of water chemistry. The book includes world class reef aquariums description along with priceless advice on how they were planned and how they are kept healthy and vibrant. Covering the biology of coral reefs and relating it to the biological, chemical, and physical parameters considered when creating a reef aquarium. Home aquarist moving into an area of knowledge that was once the exclusive domains of scientists. Order at Amazon.

Pros: Great Article
Cons: None
This is a very good write up, thank you! Something all should see
Read more…