I have always had fish tanks growing up. I mean my dad back in the 80s/ 90s had around 10 tanks 180s, 240s. It was insane, he literally had to rent a uhaul to move his fish ... My mom even let me fish in the tanks (no hooks), man my dad was mad lol. So my love for the ocean started- surfing / scuba diving. As I grew up I did freshwater- I had a monster 135 in my room... Then I got out of the hobby... One day I watched my friends tanks, not even 24 hr later, I was
buying my first 30 gallon bio cube.. Which is now my wifes tank, not sure how that happened.. I mean I do all the work.. 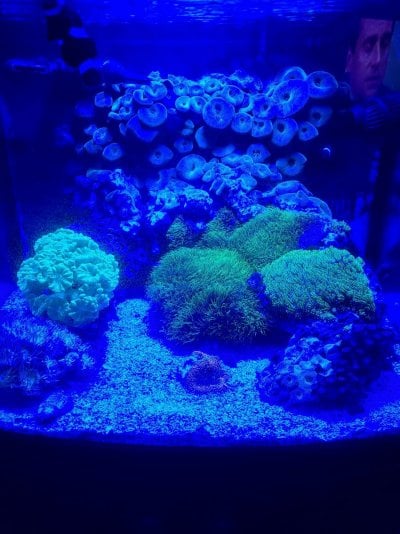 Well I wish I would have know about this site when I set up my tank a while back . So rather then seeing the current build from the start, you will have to see the progress going forward. Also I would like to share my mistakes and improvements- if it saves anyone time and money it was worth it .

So I was so stoked to build my dream, I rushed and over looked so many little things that I am now correcting. I have had 2 itch attacks and even hair algae issue. I basically lost everything and was on my way out of the hobby. Some of the issue I had was following: skimmer was not in enough water (at the proper level), light were on the wrong setting, power heads were not at the right level and last but least my water changes were to small. My rock work was also an issue, everything died behind my rocks and I was SOL. My sand bed, well lets say I let slip on vacuuming it out once in a while. 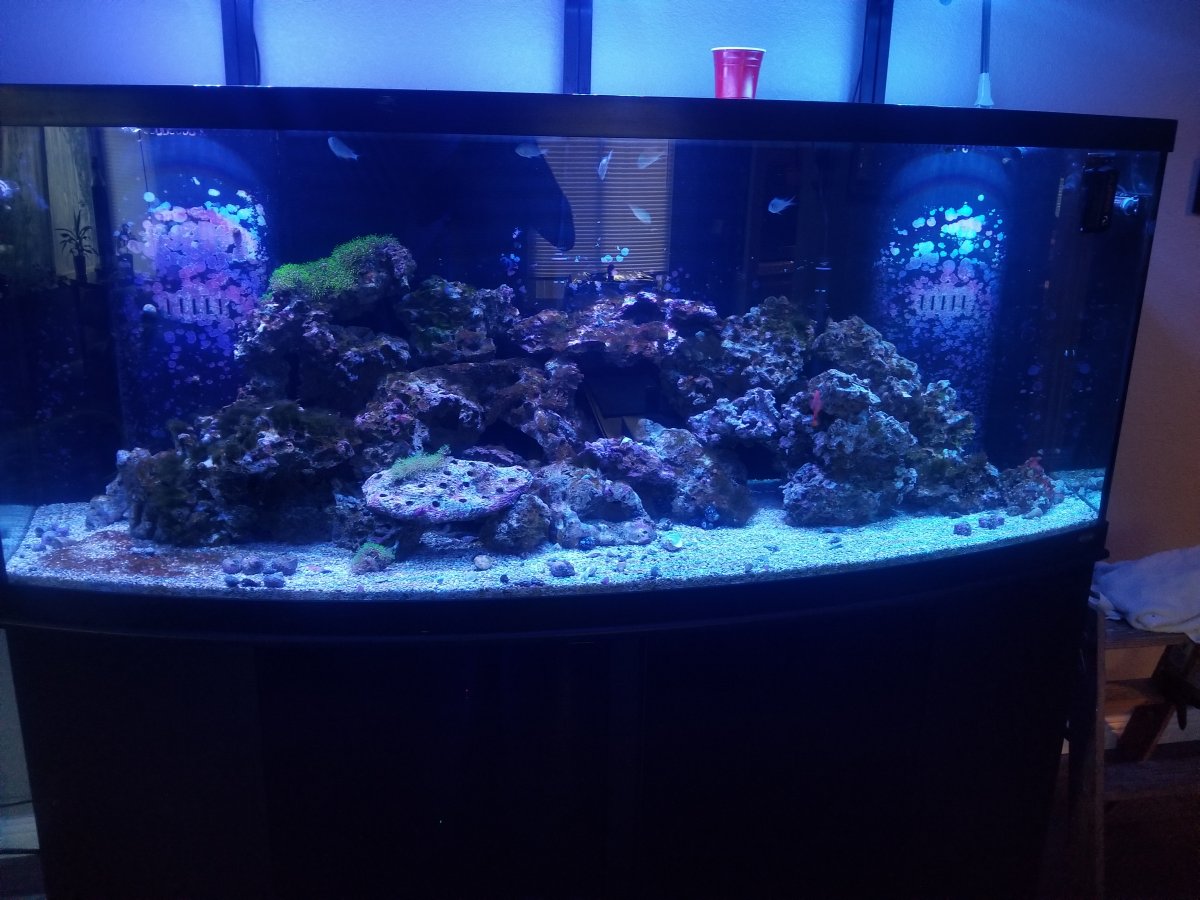 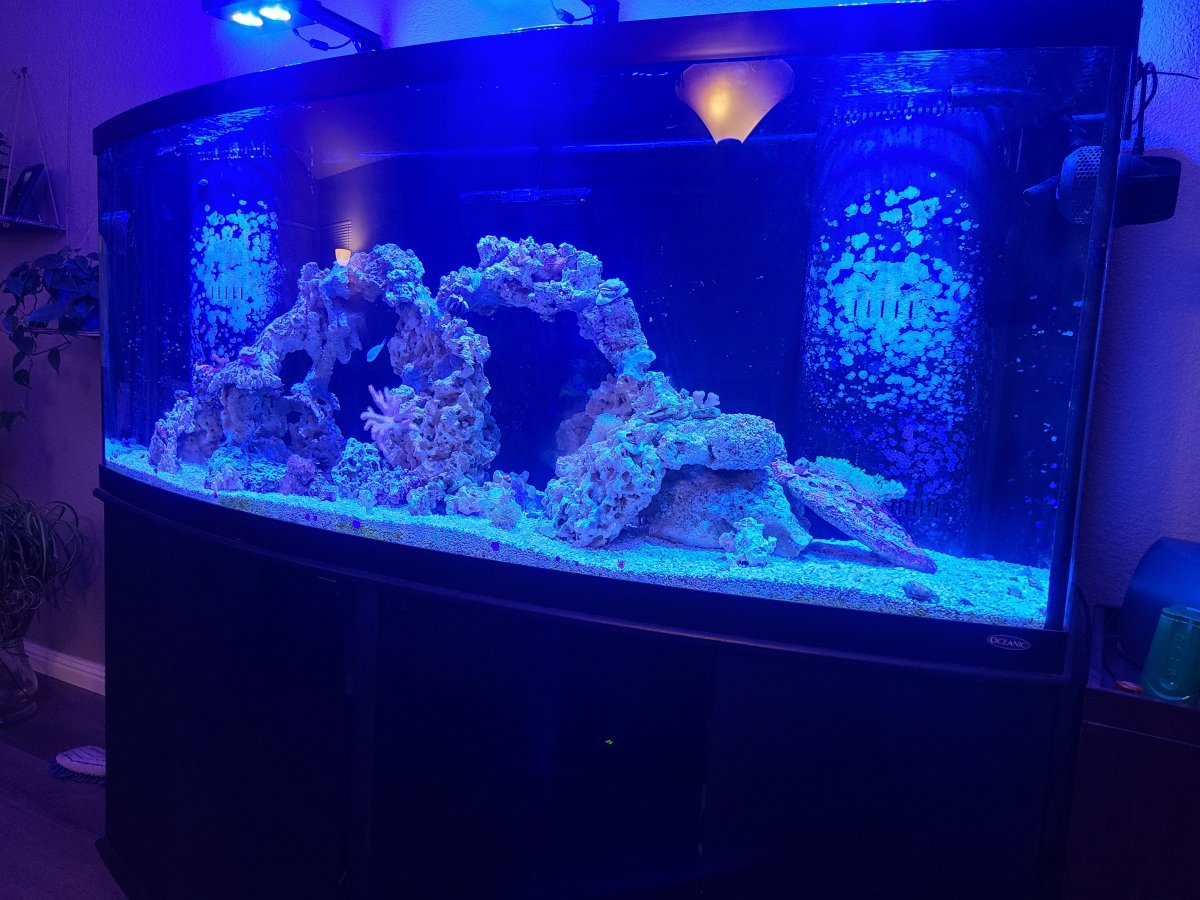 Here is the new rock work, I went with. I still need to finish a floating island on the right side. I love it, night and day.

I used to use 55g brute trash can, with hoses to do my water changes.. It was the easiest at the time for me. I have recently upgrade to an APEX DOSE Auto water change. I ran it all in PVC through my attic to my garage. I did not want any attic critters to chew my line. In all I wanna say it is around 60ft in all and I currently just doing 2 gallons a day. 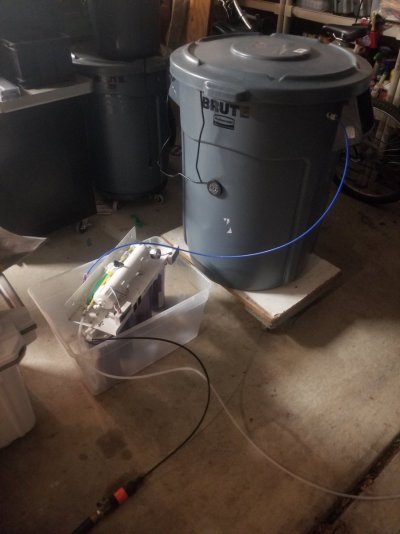 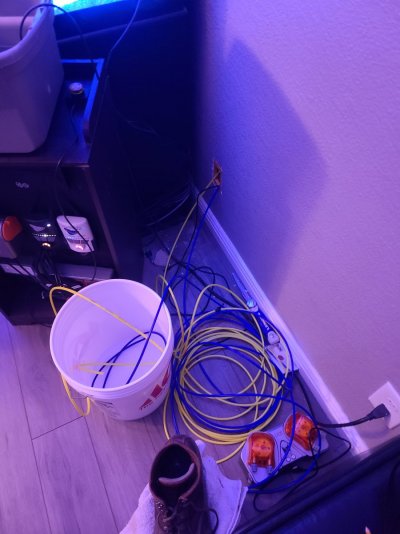 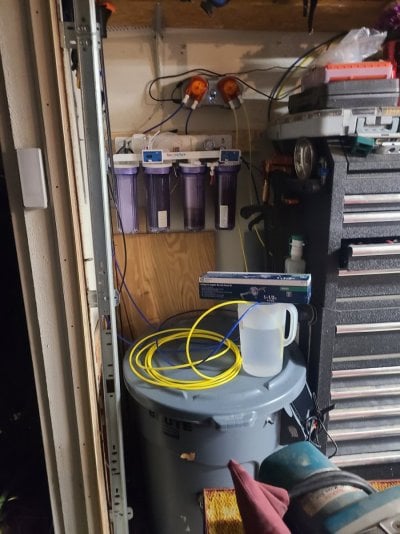 I used to keep all my equipment under my tank, but ran into a few issue at one time. Decided it was time to build a equipment box, which I did not leave room for expansion. So now I will be trying to build another one, even better than the last. My wife is not a fan of more fish tank stuff. As this is center of our house... 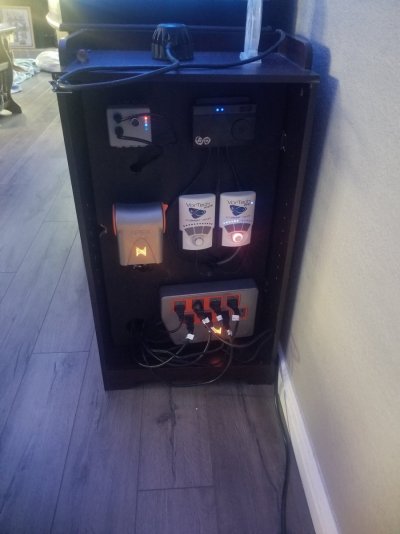 So as for the under the tank- i wish my local reef tank store would have not sold me on eshopps sump. I would have gone with banshee sump, I a huge fan of their products. I also used a 10 gallon brute trash can for my ATO. My wife decided she wanted to make my house into the rainforest, which then I got these stupid bugs in my ATO container under the tank ... So I ordered my self a little Christmas present..

My new project for the tank is the following, redo the light under the tank. I hate having to use a head lamp. I recently ordered a ecotech L2, which has prompted me to redo all my plumbing under the tank. I was excited and over looked alot of items. Such as unions, and even a manifold. Another issue I have is my electrical in my house, 2 of my rooms (including the tank) are one breaker. So I felt a manifold would help me a little bit. So I'm like a little kid waiting for my BRS order to come in with my fittings and colored PVC.. Plus im waiting on my 10 gallon ato from Banshee. 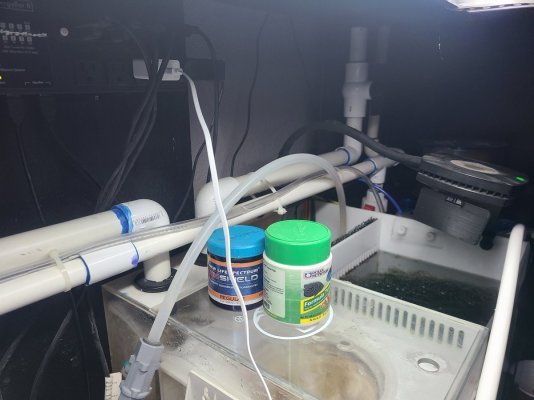 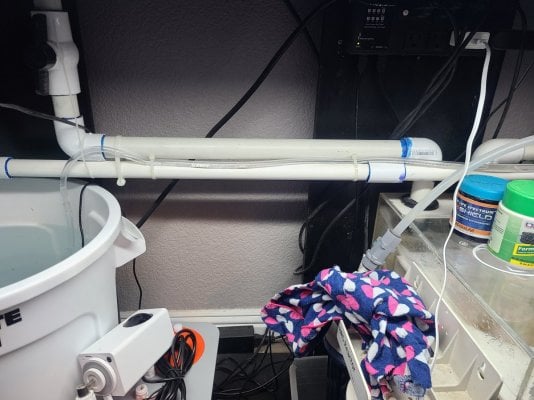 I'm just starting to get into dosing as I went crazy with corals... I notice my cal is high and alk is low, so ill be using BRS 2 part. Those guys are awesome and have helped me a ton... Last but least I will be entering into a fallow period. I teamed up with a great (friend now), who has a small out of his house aquarium business. I team up with him on builds once in a while, I do for free just learn and help him out. So 80 days of no fish is going to suck, but I do not wanna go down the same path as before. Flushing fish down the toilet is by far the worst. As fish prices have gone up from covid and me not quarantining, my buddy does it out of his house. For an extra 10 to 15 per fish, they go through 3 months of quarantine.
So it gives me time to play with my corals and upgrade various things with the tank. I am a OCD when it comes to my tank being silent and I HATE cords.. Also my I have learned so much in regard to what an apex an do and how to write these codes...
My bigger plan is to buy a separate gfo, carbon and bio pellet reactors. I feel I might be out growning my BRS duel reactor. I also need to set up 2 of these WYZE camera on the tank. Then I can keep an eye on my wife, while she sits on the couch. Ya, I get bored- I love to mess with her..

Please feel free to throw out an idea or anything you think will help . But must of all thanks for taking the time to read my post. Till next time, Happy Reefing.

Well I was super excited to get busy this weekend with my plumbing. But sounds like my L2 was delivered to the wrong house in the wrong state. Also my box from BRS got opened on its journey and I'm missing a few things. I had to also return my LED lights for the cabinet as they did not provide hardly any light..
Anyways I been trying to figure out the best way to go with my plumbing in my tank. I have done some drawings to help me figure this out. Blue is unions, red is T's .

If anyone has some some input, please let me know. I am on the fence about my tank having another pump for the media, not sure how I would run that idea? 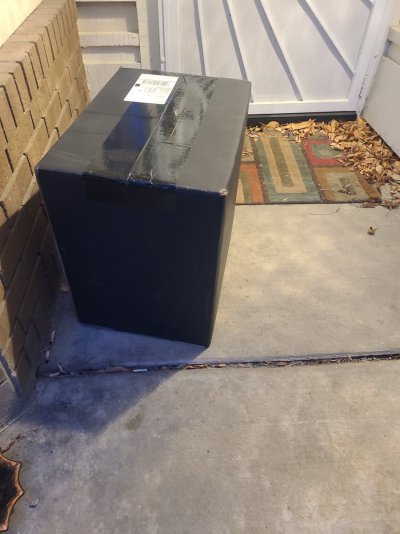 well the black boxs from Bashsea showed up, pretty excited to get below the tank. While I wait for a few more parts to slowly make there way here. Then I can finally do the plumbing, wiring, redesign sump, wire control, and get my dose on the tank. My alk is low, cal high and mag on the money. If you get a chance to get a trident, I suggest it.

I tackled the cabinet lighting finally. After countless returns- I finally got a light I can get down with. I no longer have shadow areas under the tank, which has already made my life a little easier.

This was my old light, it was bright. But it was not long enough to cover the 6ft of real estate. Some old 10k- 3ft fish tank light. 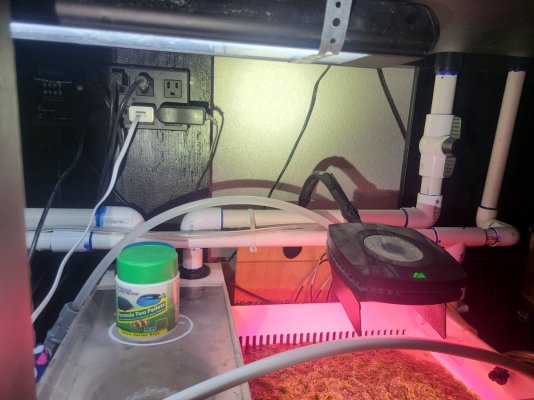 Here is the link to the lights I used. Pretty cheap, but get the job done.. Thank you amazon...


I also picked up two cameras for the tank. I been on the fence about adding one below and one on the tank. I'm changing jobs, so I will be gone for at least 3 days a week. I have way to much money invested in this tank to not keep an eye on it.

Is your tank on main level...is there another level below it...did you add floor support?

muggle0981 said:
Is your tank on main level...is there another level below it...did you add floor support?
Click to expand...

Hey
Concrete slab under the tank, its a one level house

Do you have any updates for us?
OP

Well I have been slacking on posting an update on my tank.

Between parts coming in, my local fish guy, and getting into 3d printing- im slacking.

So I got my plumbing done for the most part. I did 1" lines and my reactors are 1/2". I still need to plumb my return lines off my reactors. I also still have a small section of rock work to finish . l need to finish my control board under my tank for my dose.. 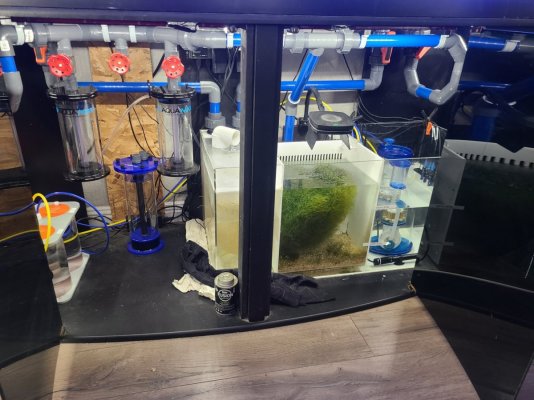 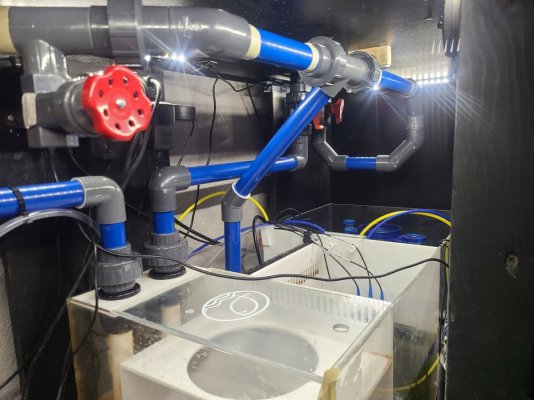 I hate the eshopps sump, I had to get a little creative with it- my pump is way too powerful. So for now it will stay where it is, if i need to move it, it will be easy.

If you live in Northern California (solano county / Sacramento) I would suggest you check out Dan at https://aqualifestudio.com/catalog/index.php or even check out the website. I was looking for a fish guy for help with my tank and guidance. Everything you see is Dan's doing, He brought my vision to life and updated it. Plus I got some mp40 extension cords from him. He is also where I will be getting my quarantine fish from. Hopefully this advice will help out a local guy..

Build Thread My Journey Reefing On A Tight Budget 55 Gallon