Well for starters I assumed this would be much easier than it is so I thought a Biocube would be the way to go. Maybe I’m impatient, maybe I should have done some more research. Well, I have wasted a ton of money on mistakes I made personally. Here is my story so you don’t do the same.

Going into this, I wish I had planned on going with a rimless tank from the outset and never made the Biocube purchase. I decided after receiving the tank that I wanted a rimless tank, which means I needed to remove the Biocube rim and YouTube made it look easy. But not many people post videos showing you their fails, huh? Had I made a YouTube video, it would have been in the bloopers reel. Shattered that thing like it was hit with a baseball bat. No clue why since it is not tempered glass either. $400 more and a week later another one arrives. This time I took hours to take the thing off and now it looks great.

In the course of my research I had seen some people talk about fish jumping. My first purchase was an Octo lid from from Octo Aquatica. After doing more research and not having the tank up yet I also decided to go with the InTank media basket and the Tunze 9001 skimmer. I made the necessary changes to the second chamber... that’s not a PITA at all.

Mistake number two: It was time to decide on my rock and sand. I went to my LFS and got cured rock and live sand since everyone said it speeds up the process. Well as I stated above, I’m impatient, which is not a good thing in this hobby. Got 22 LB of rock because I eventually want to try my hand at acro. Seems if you have the rock too high, you will eventually have them sticking out. Rearranging live rock when you’re trying to start up your tank is extremely hard on the system, and will likely kill everything outright. I liked the look of black sand. Black sand has some magnetic pieces, and general advice is to run a magnet over it before putting it in the tank. Well with the flipper being magnetic I’ve repeatedly scratched the hell out of the inside of my tank.

I finally get the rocks and sand settled. Setup my scape and it’s the way I want. Got a Rodi system with 2 brute barrels in the basement that run rodi and saltwater up for auto water changes with individual lines ran inside pex-a tubing. I have a septic drain installed next to the tank, and a small pump with 1/2” tube running from chamber 3 so I can auto remove water right down my plumbing. 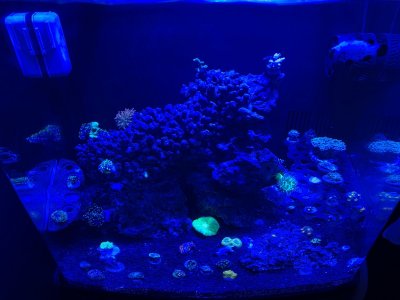 Hahahaha, I made mine rimless too. It was easy. Razor blade on the inside to cut the silicon and hacksaw to cut the rim. What did you go with for lighting? Dosing?
OP

45ZoaGarden said:
Hahahaha, I made mine rimless too. It was easy. Razor blade on the inside to cut the silicon and hacksaw to cut the rim. What did you go with for lighting? Dosing?
Click to expand...

Crazy, don’t know how I missed that. I went with an AI hydra 26 HD for lights. I wanted to go with an automated approach and the WIFi option is more my style. I haven’t needed to dose anything as I have one gallon draining and being topped off every day from my basement. Keeps the parameters pretty much at always the same levels so far. 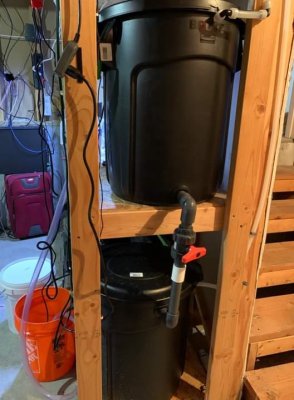 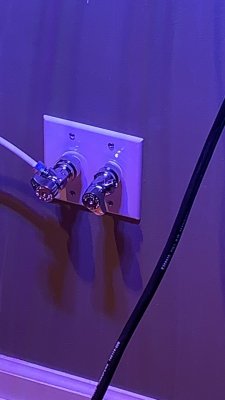 Using the WiFi inkbird setup with the BRS 100 for my heater.

Good choice on the lights! The auto water change system was also a great idea. Wish I had a basement to have a mixing station, awc, ato etc. looking forward to see where this build goes!

Following along. Looking forward to see pictures of the tank now
G

I cracked an old biocube 34 gallon I got for $40 trying to make it rimless. Almost had it all off to.

45ZoaGarden said:
Good choice on the lights! The auto water change system was also a great idea. Wish I had a basement to have a mixing station, awc, ato etc. looking forward to see where this build goes!
Click to expand...

Well my back was broken a few years ago so doing the bucket thing was kicking my butt. Was more of a need then a want for me personally. That along with the fact I could not manage to achieve the task without getting water absolutely everywhere.
E

I still have my Biocube 32 with rim and Steve’s LED. 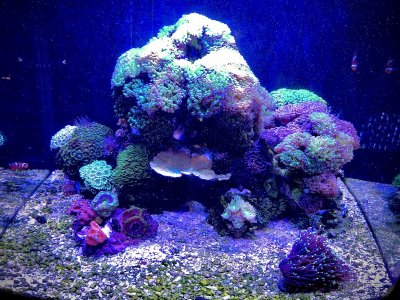 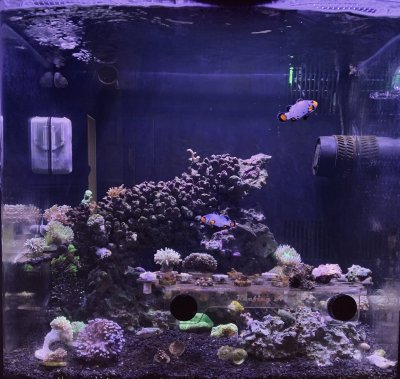 How many pounds of sand for biocube 32?