Started this build about 3 months ago. I've had help from a few locals, and quite a few members. So thank you R2R!

I bought the tank about 6 months ago, with plans to reef, responsibly and on a budget. I found a local woman, who had tried this hobby without cycling and just threw a few hundred bucks of fish in. They died within days, she gave up the tank for next to nothing. I then found a member selling his current usa marine ic loop for fairly cheap, so I grabbed it. And so it started...

Tank was started with 40lbs of live sand, 7lbs of base rock, and a Seaside Aquatics HOB skimmer. After the first week, I added about 50 or so more pounds of rock, and added a raw shrimp to the tank to kickstart my cycle.

3 weeks in, the hangar on the skimmer broke, and water was everywhere. I cleaned the floors and removed the bits of skimmer that made their way into the tank. Then went and bought a Tidal 110 HOB filter, purigen, and carbon.

Another month and a half, the first half of the cycle was through. I added my CUC. 2 weeks later, while looking at the LFS, my girlfriend found a "cute little Nemo playing in his anemone". She bought the Thunder Maroon clown, GBTA, and a smaller Lightning maroon clown...

I took to reading about the anemone. I found that my tank was MUCH too young for the nem, AND with a tank as deep as mine, (30 inches), there was no way the current USA light would be good enough to sustain it. LFS wouldn't take the nem back, so I bought a Mars Aqua 165w and had it hung from the ceiling the next day.

The GBTA survived, found it's home and settled in. The Thunder maroon (larger of the two), found her nem and settled in quite aggressively. The lightning maroon stayed in the upper backside corner. (To this day, she does not venture far from the nem, except to bite me. He does not venture far from his corner, except to eat. No fighting, a chase every now and then but very rarely.)

I knew I wanted a mandarin or goby or something eventually, so I then added copepods, from PODYOURREEF, (super cheap, super good, and the bags are absolutely PACKED with pods. Shipped quickly too). Also, I paid for a 20 oz bag of pods.... THEY SENT ME 2 FOR 20 BUCKS!!!

A few days later, my girlfriend, (again shopping at the lfs for our freshwater tank), comes home with an Elibi dwarf angelfish. I take one look at this thing and am taken aback by its beauty. Can't even be mad, I'd had done the same thing.

I monitor the tanks parameters 5 times per week at this point. Everything is still good to go: 0 ammonia, nitrites, and <10 nitrates, low phosphate, 1.025 holding steady at 8.0.

My GBTA, did this weird thing every night, where it would deflate for a few hours. Scaring me to death that i had lost it. EVERY SINGLE DAY. Some days were longer than others, and I'd take PTO at work so I could monitor it. I knew they pooped, I knew they deflated for intake of new water, but I couldn't figure out why it did this every single day. I tried different lighting levels and nothing. The nem would never move from its spot, his foot never detached, so I was at a loss.

I wanted to get more surface agitation, and more flow throughout the tank. So I ditched the eflux powerheads and the loop system, for one 3k icecap gyre. Much fewer cords, and only needs 1 outlet, as opposed to the 3 for the LOOP. (Which is for sale if anyones interested )
Had to turn that baby way down to 20% in all modes my for tank, but it works and if I decide to move to a bigger tank, I've got it.
1st day of having this in my tank, the nem didn't deflate or close up. Happily waved in the (pretty low) current. It's been 3 weeks, and it seems very happy now.

I then decided I wanted to buy a couple of the things that I wanted. I'm a big fan of palys and zoas, but she found out about the palytoxin... ATM I'm banned from getting them. So, I grabbed a diamond watchman goby, and a skunk cleaner.

This was last week, tank parameters are all the same, with exception to the ph, which is now at 8.2 and holding steady.

My next aim, is to start adding some of the easier to care for coral. But... with the angelfish, it appears that will be harder to do than not. Any advice here?

Also, is it normal for the clowns to completely ignore one another 99.9998% of the time? 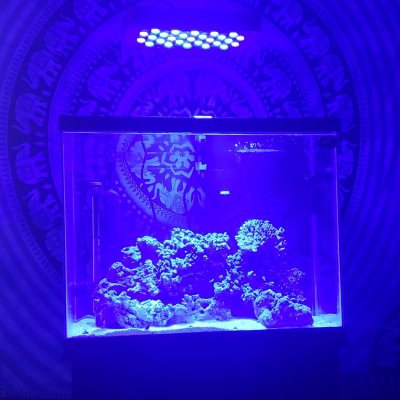 Been awhile since I've updated this...

Sorry in advance as I did not take pics to document my journey...

About a week after the last post I switched tanks to a 70 something gallon bowfront.
The changeover went very well, took a few hours but no spikes and no deaths. I also added a big Halloween hermit.

2 weeks later, I started adding my corals. First up was a 1 polyp acan, 1 polyp blasto, and a 1 headed frogspawn. Minutes after adding these, the eibli angel started going to town on the acan.

I started the hobby with a good balance of love for both the corals and the fish... after my first taste of corals, that changed. So, I called my lfs that sold me the angel and they agreed to take it back. I made a plan to return him the next morning.

Once I made it to the tank the following morning, I looked all over for the angel and couldn't find him. He had a tendency to swim into the smallest holes in the rock work and come out the other side, so I looked throughout the rock. There I found him, lodged into one of the smaller holes that he had previously always swam into. Something happened this time though, as he was flat and motionless. My Halloween hermit had been munching on his anal fin. I moved the hermit and slowly grabbed the eibli. As soon as I touched him he flopped pretty hard, so he was still alive. I pulled him out and put him in a makeshift hospital tank. He did not make it, and died an hour later... this was my first loss.

I continued to add coral, next up was a vivid riddler chalice (? I think), JF Aquaman, G.I. Joe favia, and a rainbow ricordia. All of these started as 1/4" pieces except for the riddler. Most have grown very well in the 3-4 months since adding. With the exception of the aquaman and favia. Aquaman was broken off the rock it was glued on, and covered in sand by the hermit. By time I found it, it was not in good shape, (ended up losing it 2 weeks later). The favia just kinda "is" right now, no growth, no recession, just there. Not sure what I'm not doing correctly there. I've tried it in different lighting's and flows for weeks at a time and still no change.

At this point I'm testing Ca, Kh, and Mg daily to monitor my intake. No noticeable changes and nothing bi-weekly water changes of 15-20% couldn't handle.

My nitrates were fairly low <5ppm, so I let me gf pick out some more fish for the tank. So far we had 2 clowns, 1 diamond goby, CUC, 1 GBTA, and a small handful of frags.

We picked out a ORA yellow tang, 3 blue damsels, and 1 yellow tail damsel. These were all QTd at a lfs, and added over the course of 3 weeks. Yellow tail went first, then tang, then the 3 blues.

Next coral additions came shortly thereafter.
1 indo torch (1 head), 1 aussie black torch (1 head), 1 crostata torch also one head. After trying to remove the indo from the plug to glue to the rockwork, I shattered the skeleton. I did everything I could to put it back together and hoped it would recover. It didn't thanks again to my halloween hermit rampaging through the tank.

***I do not believe this guy is purposely killing things off at all. But he is big, and not graceful at all.


2 to 3 weeks ago, my GBTA split from 1 to 3 out of nowhere. all parameters were the same as they have been, no change in flow, nor lighting. All three are very healthy and look amazing.
They've all grown around 1 inch since the split.

My cristata now has 2 almost 4 heads, my torch has two full, nearly a third, my frogspawn has 3 heads.

That brings us to this past week, (Wednesday)... I took all equipment down to clean. The light needed some extra loving so I took the back panel off to really get the dust out of the fans and clean the vents. Once I put it back together, the LEDs would not come back on. I took it apart several times and made sure both connections were right. They were. The fans would come on, but no lights. Have no idea what I've done to them but I was on borrowed time. I dug in my closet and found my current usa 36-48in light and threw it on the tank. Somethings better than nothing right?

I bumped the blues to 100% and the whites to 30%. Here we are 1 week later, and everything is still pretty happy.

I do plan on getting a new light to replace this with, but this is not the best time of year to do so. So unless I find a great deal, I'm stuck with this one for now.

**I am not trying to knock Currents lights by any means, I'm sure they are great on shorter tanks. My issue lies with the power to reach deep and deliver good par for the sandbed. That's all. 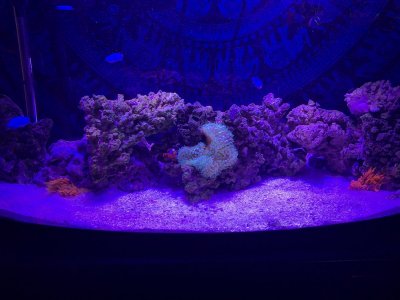 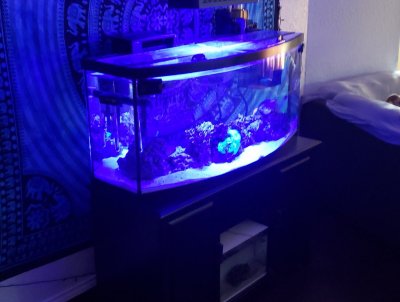 Oh, how could I forget... I also got a marine betta, maybe 2-3 months ago! He's doing great. Sorry for the bad pic, he's pretty hard to catch. Since the switch in lighting, he has been more active in the tank. He now swims to the far side of the tank and just hangs out!