I have what I believe to be a condylactis anemone. I’ve had it for about 2 months.

long story short I was in between tanks, had fish in hypo, everything was well, I had the DT at around 1.019 salinity just so I can slowly ramp up salinity in the new tank rather than still in QT before I put corals. Took about 3 weeks for me to hit 1.025 but I still put the other corals when I hit 1.023

i had the condy, my only “coral” in the dt, it didn’t have light for the first week or so but it was happy. I ended up putting the lights about a week or 2 later and she was fine (I did not feed much and I think that was my mistake).

suddenly the anemone bleached. I don’t know the cause of it. I tried spot feeding it for the last 9 days since I noticed the bleaching. (Spot fed her with mysis, krill or brine every 2nd day). Still no sign of improvements, the anemone looks a little worse actually. The anemone moved spots, she was at the corner of the tank and now she’s towards the middle. Her old spot was between 2 rocks stacked on top of each other and she could freely move under the gap if she had too much light. I’m really confused at what I should do and I’d like to not lose her. Every other coral is doing amazing, including 3 SPS I have.

here’s a picture of the same kind of anemone from the LFS, mine was a little smaller with thicker but shorter “polyps”. It’s green with purple tips.

2nd pic is my anemone last Friday, now it actually looks worse and the “polyps” are skinnier, shorter and more pale than last Friday,

any guidance is appreciated, thanks. 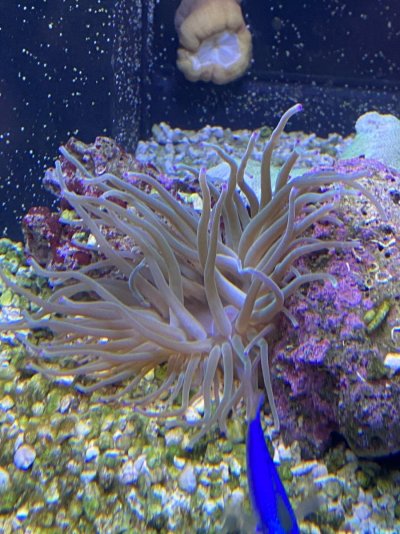 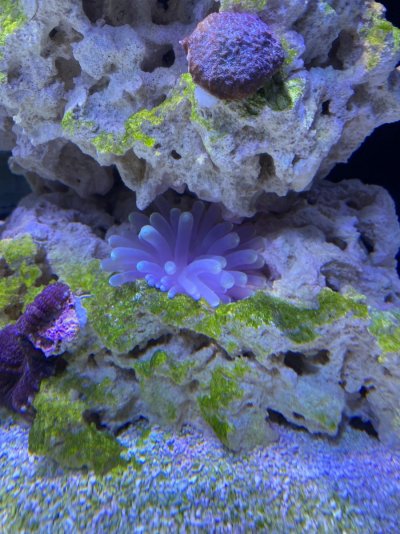 Give it time to adjust to your lights. Are you sure it’s not a purple condi?
OP
B

chizerbunoi said:
Give it time to adjust to your lights. Are you sure it’s not a purple condi?
Click to expand...

It was actually fine with the lights on for a solid 3-4 weeks since the lights that’s why I’m worried. It looked exactly like the one on the picture from the LFS before it bleached
OP
B

chizerbunoi said:
Give it time to adjust to your lights. Are you sure it’s not a purple condi?
Click to expand...

so should I keep feeding every 2nd day or less or more?

I’m glad I shouldn’t be worried

Slowly ramp up normal lighting. These respond to light and water flow.

do you think I should move it? Or let her find a spot

If it’s taking the food I would feed it daily as long as you nutrient export allows, at least until it recovers.

do you think I should move it? Or let her find a spot
Click to expand...

Moving it may stress it but if you can do so safely, move to a part of tank that receives moderate lighting.
These are photosynthetic so light plays an important role with them as they use it to produce zooxanthele.

It will move on its own if it doesn’t like the intensity. One week of lights out to lights on is a shock. I bet it will be out in a few days. They are used to shallow waters with high intensity.
OP
B

chizerbunoi said:
It will move on its own if it doesn’t like the intensity. One week of lights out to lights on is a shock. I bet it will be out in a few days. They are used to shallow waters with high intensity.
Click to expand...

My only worry is that it’s not the lights, it was doing fine for 3-4 weeks since I turned the lights on until the sudden bleaching.

I don’t kno if it’s 100% accurate but I read that condy need colder water than most reef tanks? Like 76 degree max , could that be an issue?

I had a Condy for many years with no issues at 26c. But it succumbed to the powerhead. But my anemones do like cooler WC and top ups.

I misunderstood your original post. I didn’t realize that was two months ago. I believe it’s starving for light and even at 40% is craving for more. But it will take a while for the color to come back. Don’t expect it to be a two week process. More like 3 months.
For many years I had my LEDs 4” from water surface at 100%. Condi was near the top.
But don’t crank your lights just like that. You don’t want to shock the SPS. Your anemone will adjust. Just give it time and don’t think too much on pigmentation.
B

Seems to be just adjusting. Partly by repopulating its zoos culture, which was probably rather exhausted after the period without light, and partly by putting its focus on getting its foot securely attached, after finding a great spot in the light. Take it nice and slow.

Help with my bubble anemone!!!