Bloom of some sort.

I'm having a relatively odd bloom of sorts in my tank, it happened about two days after the weekly 10% water change in our 32 gallon biocube. The tank is new, about 5 months at this point. I've had similar issues with our freshwater tanks, but it was usually because something got added that shouldn't of been, or a fish died in the aquascape some place.

I counted all the livestock, and everybody is accounted for, so I don't think something died in this case. I originally thought okay, maybe the RODI membrane is shot, so I tested that, and still reading 0 TDS. I added extra airlines as soon as I noticed anything, just in case, but thus far the inhabitants are acting like any other day. I did notice on the rocks toward the intake there seems to be some pretty heavy calcium deposits (I touched it to make sure it wasn't some sort of cyano, and its rock solid). I'm still trying to get my nitrates down, and phos leaching from the dry rock (I suspect) is occurring. Feeding schedule is once per day, pellets, a small pinch as my tank doesn't have a lot of live stock on M, T, T, F, S. On Wed. and Sunday, I feed about 1/8th cube of frozen mysis that gets gobbled up pretty quickly, anything left over after that I pulled out with a turkey baster. For filtration, I just have the filter floss in an intank media basket (top shelf) and chaeto in the fuge basket, that I trim every couple days.

Anyone have some advice? Right now I have the tank in a blackout, and the corals are very cranky at that.
Sorry about the lighting. It doesn't really have any sort of green tint to it like the blooms I'm used to in my FW tanks, no real smell to the water, so I wouldn't think bacterial, but I'm at a loss. Just want to make sure the livestock is okay. I will be doing a 20% WC later this afternoon, and another in the morning. 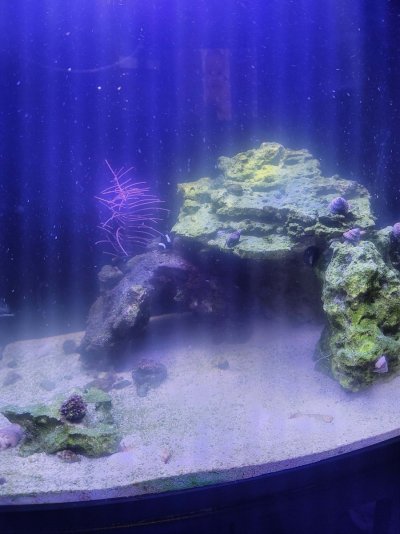 Could be a bacterial bloom
Salt water one will not smell like a fresh water one
Oh and 0.1 on Phosphate or really 1 ?
OP

water got cloudy in my 40b...everything i read about bacterial blooms said ignore it, it will go away on its own...well ignored it for 2 mo and stayed the same...so blew the rock off with a powerhead, used freshwater gravel siphon to do the gravel (i have gravel not sand) and a 15 gal water change and a couple days later it was crystal clear

Bacteria of some sort.