Thanks for the tip dbraun15. But I don't think I want to try any additional varieties of anemones in my tank. It's bare bottom so hard to keep any other carpets except for Gigs which get too large. With the mag and sebae already, I won't have the room. I wish I had a 210 like yours.

Unfortunately, I have been having some misfortunes. The caulerpa went sexual and started to release nutrient back into the water. It started turning white and rapidly. I did not catch it for 3 days as I stuffed it in the back, behind the rock work (where light still penetrates).

The LTA started gaping its mouth and the male Clarkii kept driving deeper and deeper into its mouth. This went on for two days straight and then it died. I had to toss it before it killed everything else.

Now the Sebae Malu also has a gaping mouth and released from its former spot. I'm hoping to nurse it back to full health. Fingers crossed.

Sorry about the macroalgae and your losses. This is really a great thread. Thanks for sharing your experience.
OP

Thank you. It is only the LTA that I lost. The Sebae has now bounced back and I think it will be fine.

I like your build. Always loved those nanos and your plan/diagrams are spectacular.
OP

We'll we got ups and downs lately. The first awesome bit of news is that I noticed the large GBTA was agitated as I was feeding it. It had moved to the right a bit and wasn't fully open as normal. Then I notice that the tomato female stole its food and started making a weird chattering noise. Yes when they eat, they chatter their teeth together, so awesome! Then I look behind some tentacles and look and behold. The first clutch. They must be several days old as there is a white head on each egg. 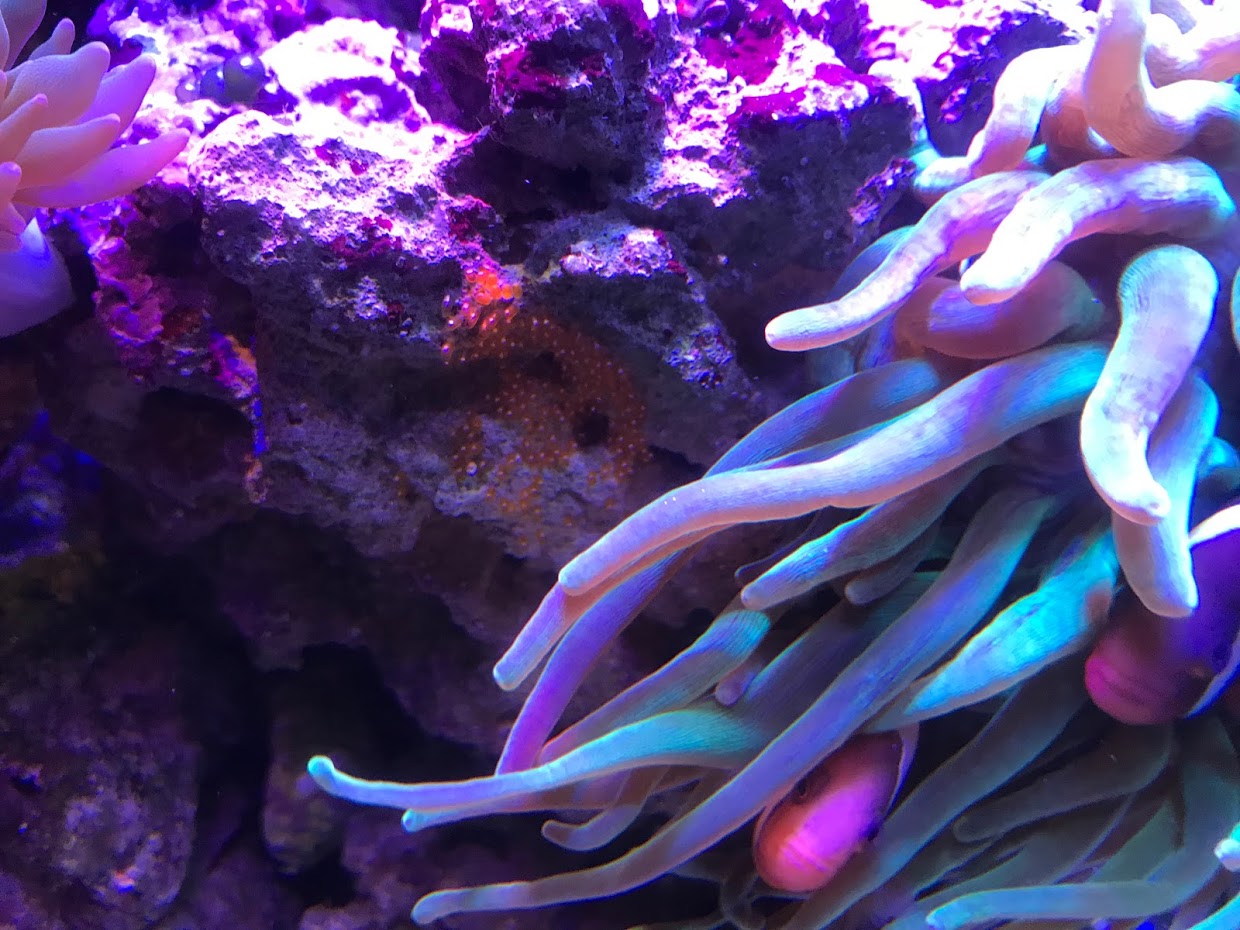 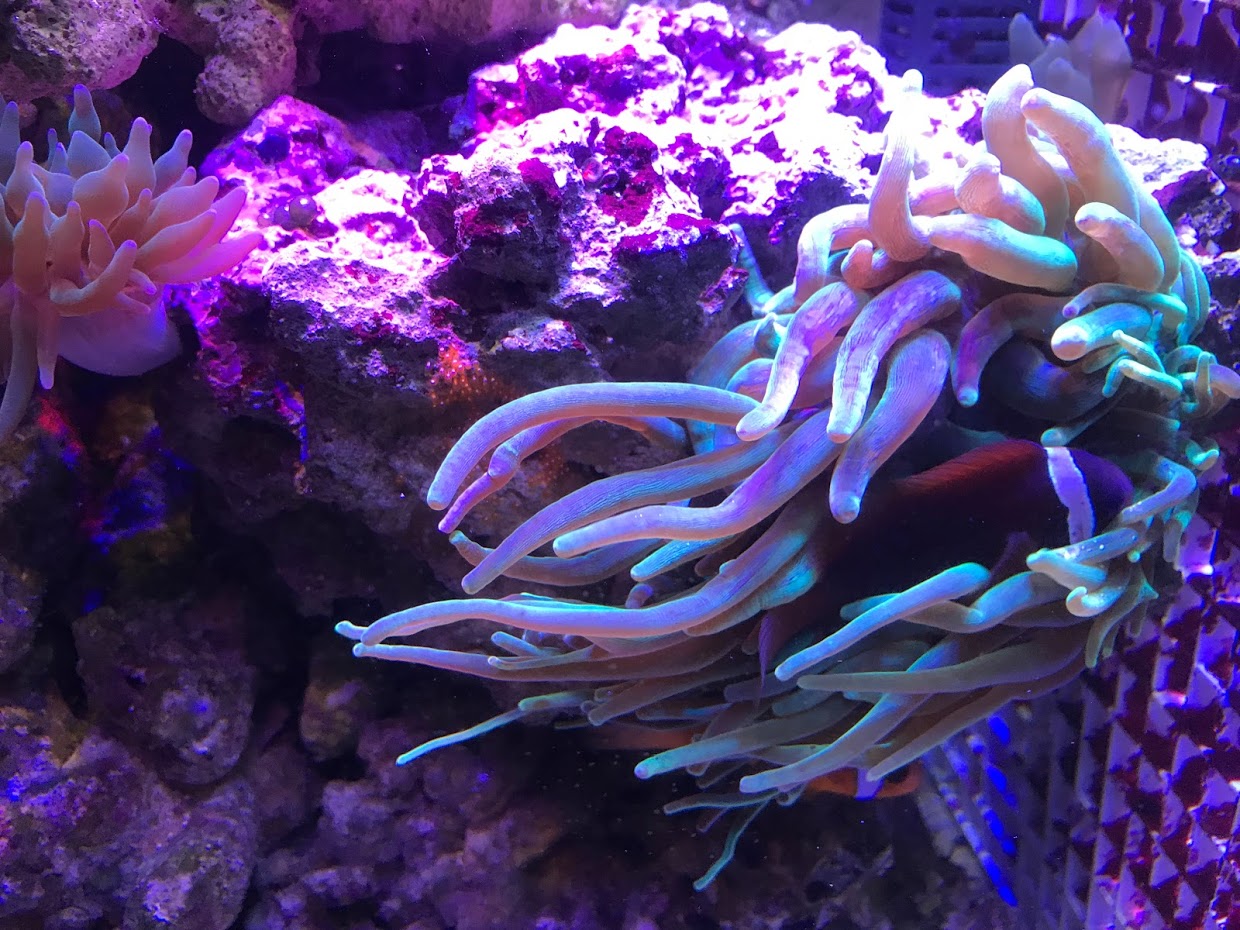 The Sebae is still not doing good. I don't think it will survive long term. It's mouth is still gaping open. 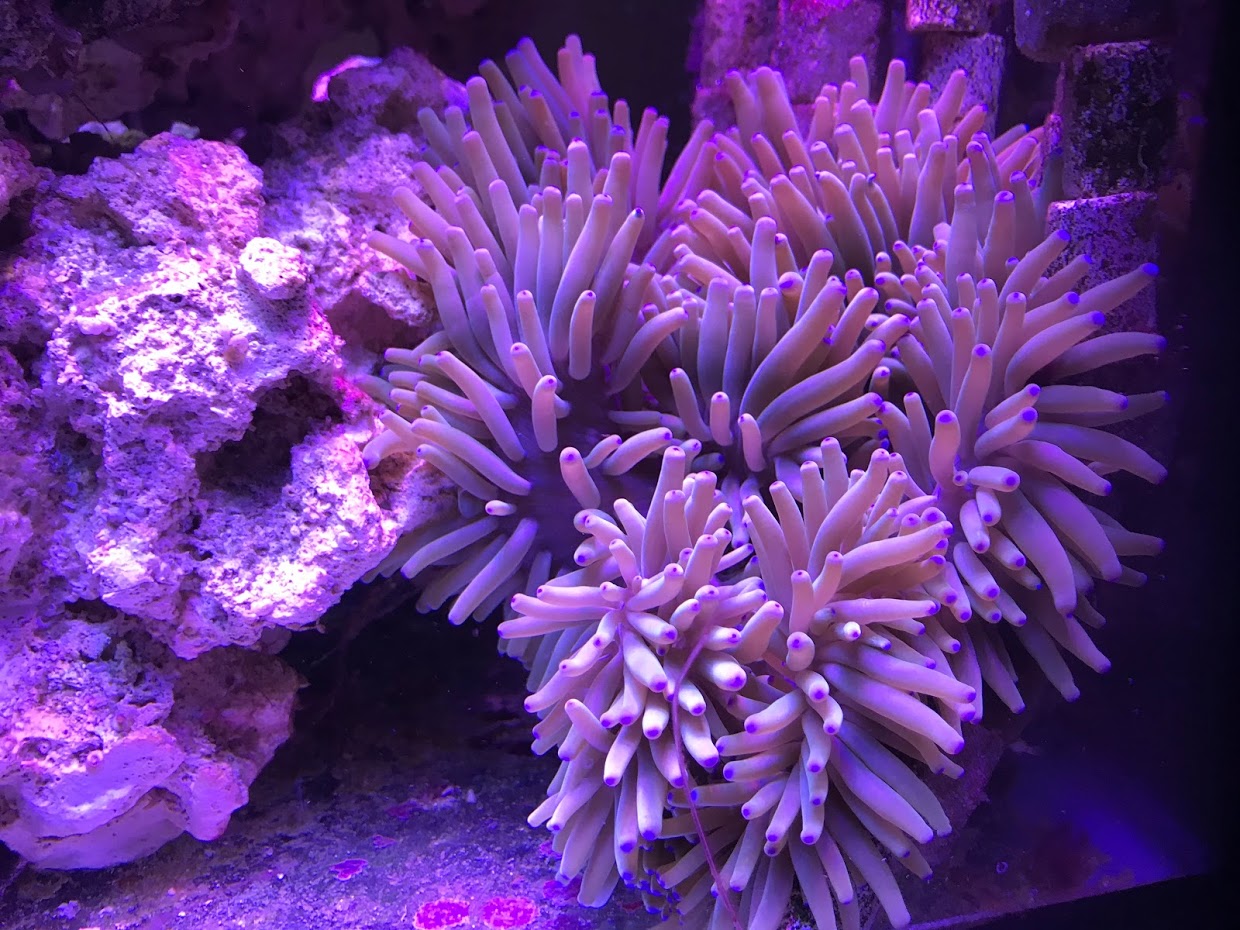 There is a major out break of algae and cyano. This was a large chaeto ball. 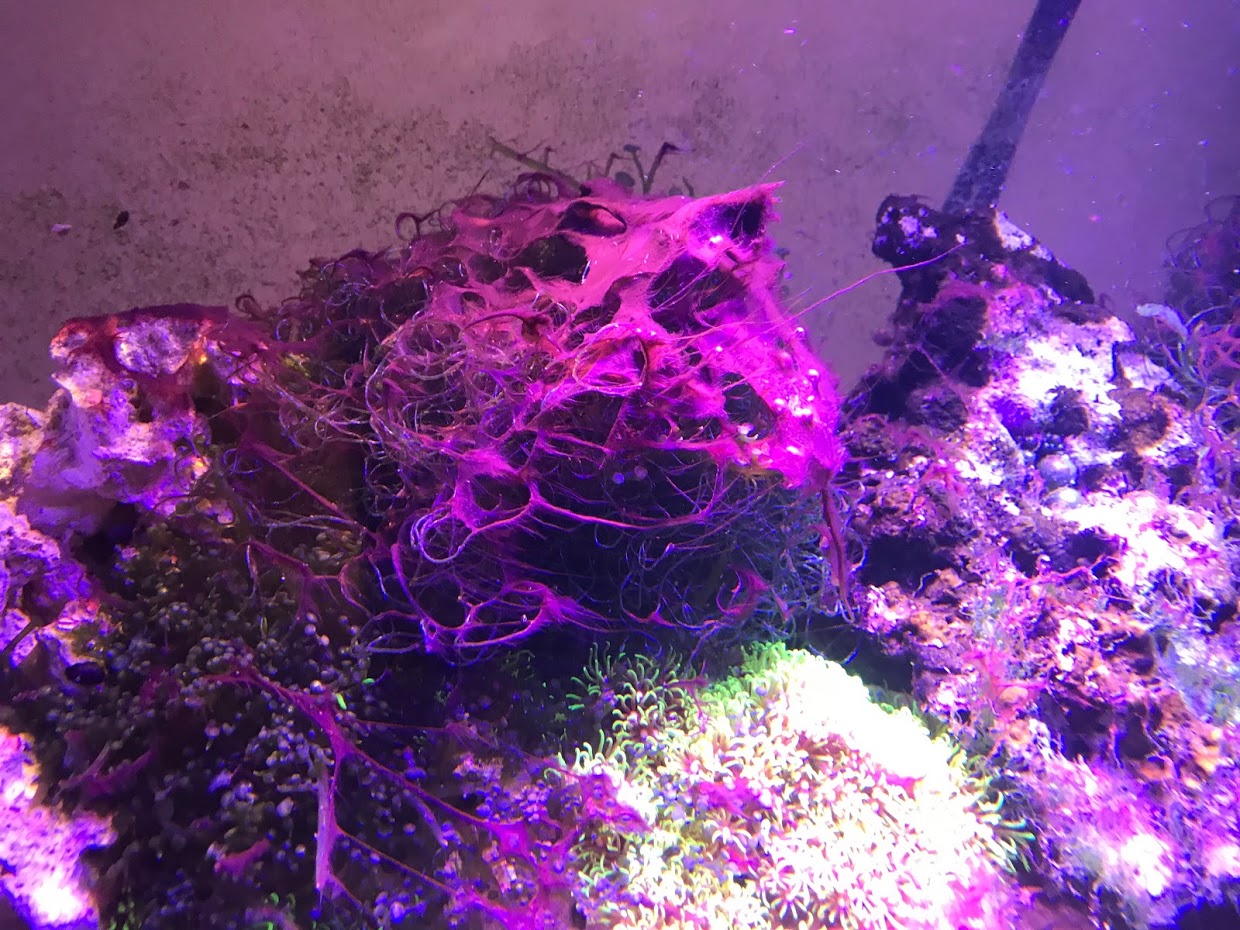 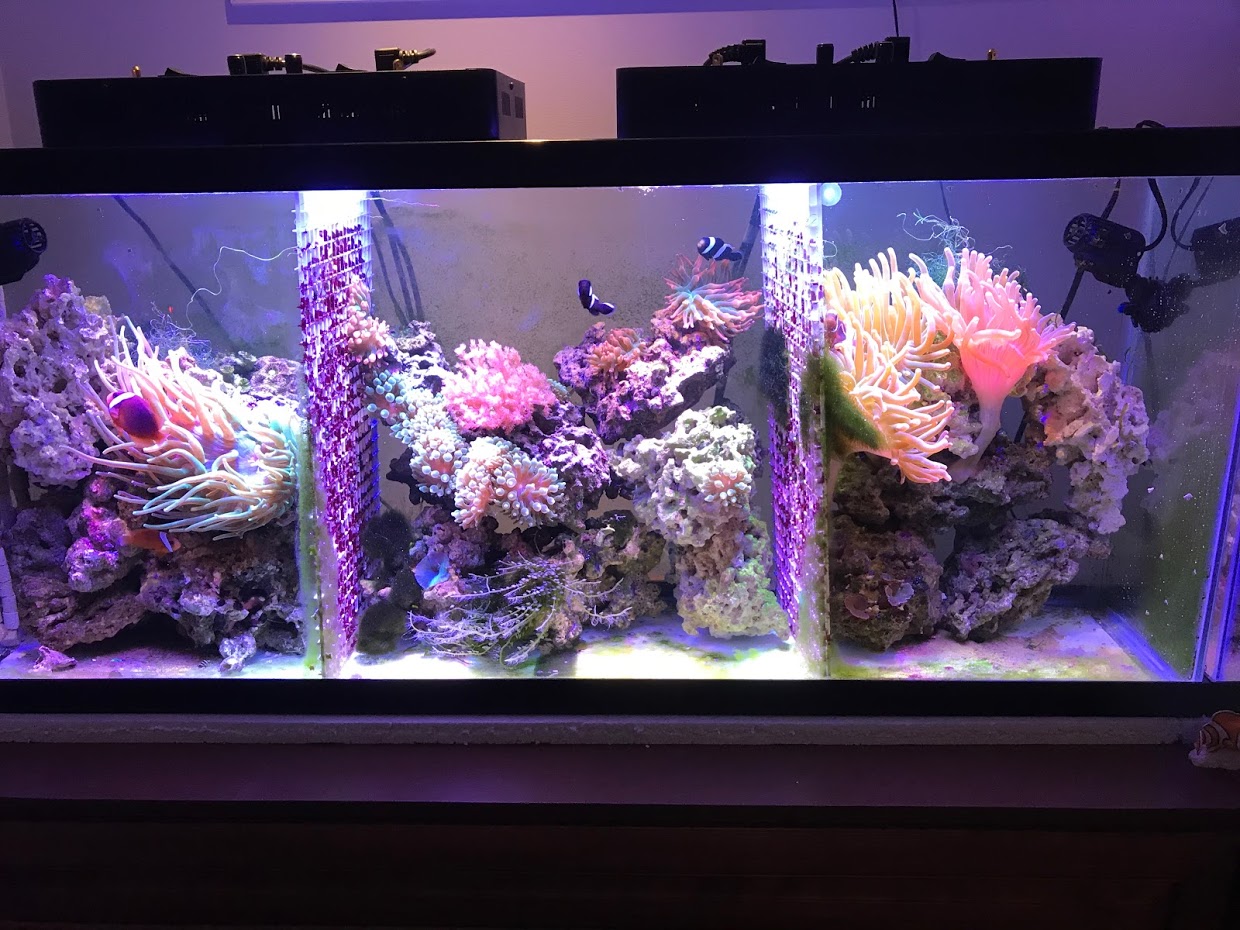 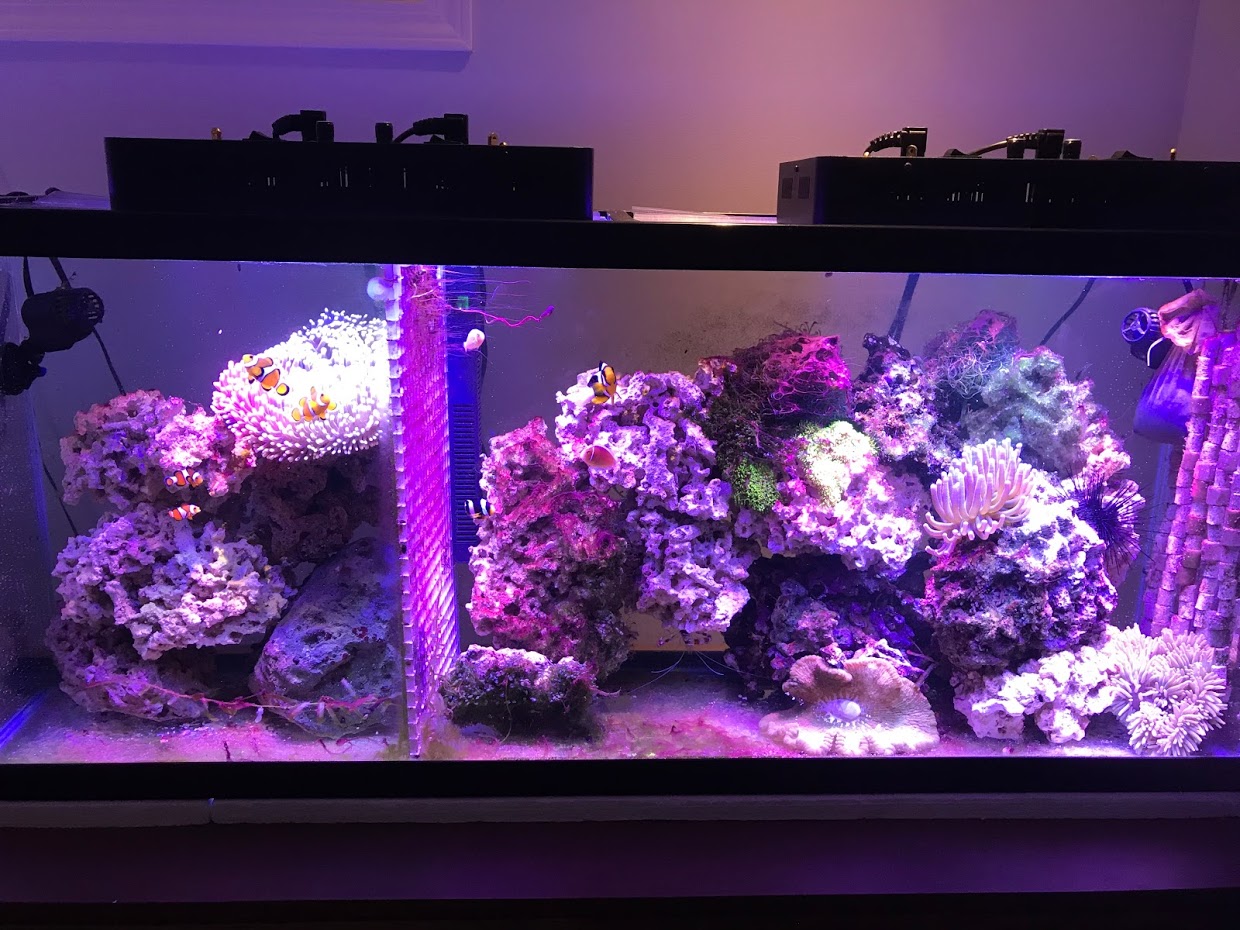 You can see the carpets mouth is now inverted as well. I might have to give in and get a sump/skimmer. If these anemones die then i'll just stick with magnificents/ condi's in this tank. Really didn't want to make the tank complex though. I like the simplicity of it. That was one thing I wanted to do differently from my previous SPS tank.

Do not be discouraged. You may find it simplistic in some ways, but it is still quite ambitious.

have you thought of raising the height of those blackbox leds to get a little more spread and less intensity on the nems?

Please don't do this, but I keep imagining what would happen if at some point you remove the egg crate. The fish are used to seeing each other constantly so maybe they would be ok... for a few minutes

How are you 4 ocellaris doing?
OP

NY_Caveman said:
Do not be discouraged. You may find it simplistic in some ways, but it is still quite ambitious.
Click to expand...

Thanks. I never had much success with sand in the past. But now I feel that sand dwelling anemones must have sand to be happy. Either that or a rock with a good hole/crevice to make its foot secure.


mike werner said:
have you thought of raising the height of those blackbox leds to get a little more spread and less intensity on the nems?
Click to expand...

The lights are adjustable/dimmable. I don't think the intensity is the problem. There should be another light to span across the top for full coverage but its in use for another project. I actually don't like the look of the lights raised above as my office desk is right next to the tank. I don't like to be blinded by the light while working.


Ardeus said:
Please don't do this, but I keep imagining what would happen if at some point you remove the egg crate. The fish are used to seeing each other constantly so maybe they would be ok... for a few minutes

Hey I've been following your youtube videos for a quite a while. Love your tank setup and sorry to hear about your troubles over the years. I do remove the egg crate every couple of months to wash it off. The fish just stay on their sides as they are used to own anemones. It's weird how they behave that way.

Honestly, once they settle into their homes, they don't move far from their anemones. But I will move them into a larger tank once they get bigger. I am planning to give each pair at least 30 - 40 gallons each. It's just hard to decide if I should build custom tanks for each pair, or just silicone in egg crate into a 90/120 gallon.

The Clarkii/Pink Skunk have been together since day one. Actually its kind of sad as I think the two largest ones paired with each other (instead of with their own complexes). I used to have a egg crate to seperate the two different pairs but they would always go and be with each other. There is aggression but no bites or excessive bullying.

The 4 Ocellaris clowns are doing good. The Ritteri is large enough for them. The two largest ones are paired but have not spawned yet. The other two were added very small and it's interesting that they have never grown. I think if the dominant male passes away, then they will start to grow.

I am currently in search of a Gold Strip Maroon or a Lightening Maroon to pair with my female. Also have thought about putting in phytoplankton into the tank to see if the fry will survive on their own.
OP

Well I think its time for another update. The BTA keep growing and splitting. I am at 27 total anemones now. I started propagating them into the second tank. The lights just turned on so everything is just waking up and opening up. I started feeding Vitalis anemone pellets which is a lot easier compared to fresh shrimp. 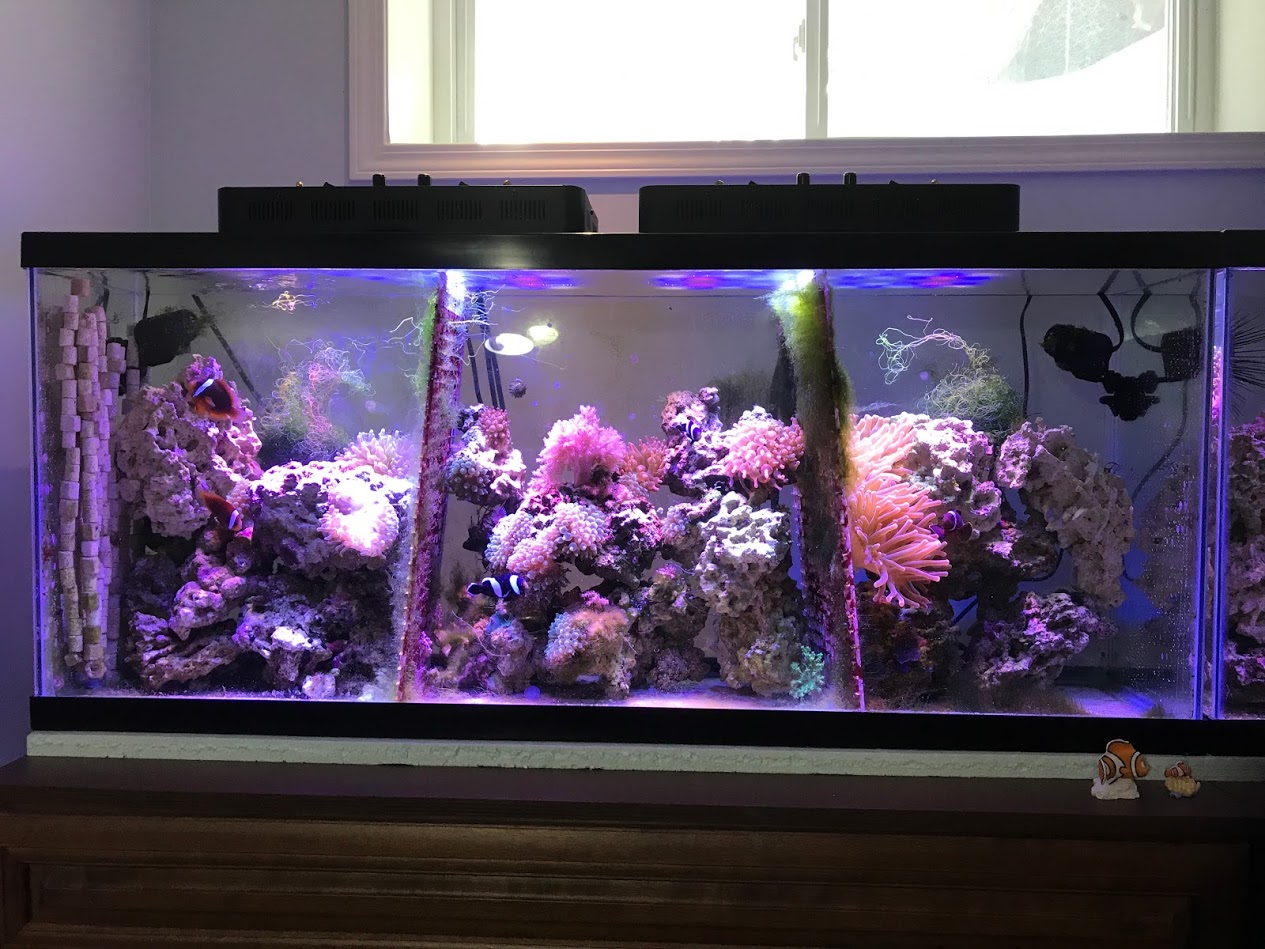 I have now witnessed chemical warfare between two different BTA. In the photo with the pair of tomato clowns, the large green one pretty much got destroyed by the RBTA behind it. It's only 1/4 the size it used to be. The tomato's still lay eggs every 14 days. 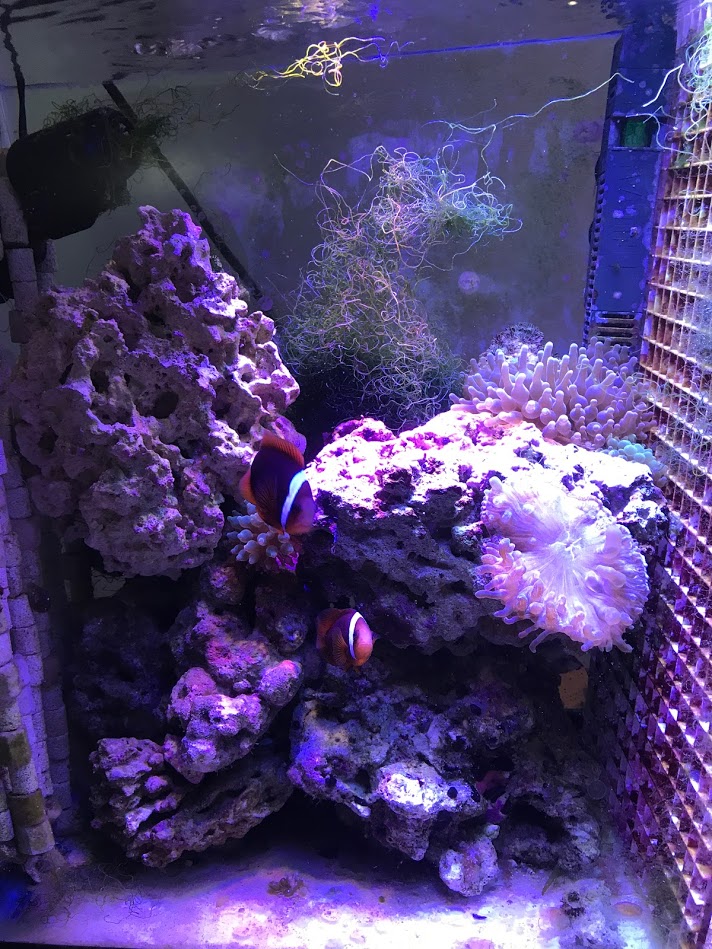 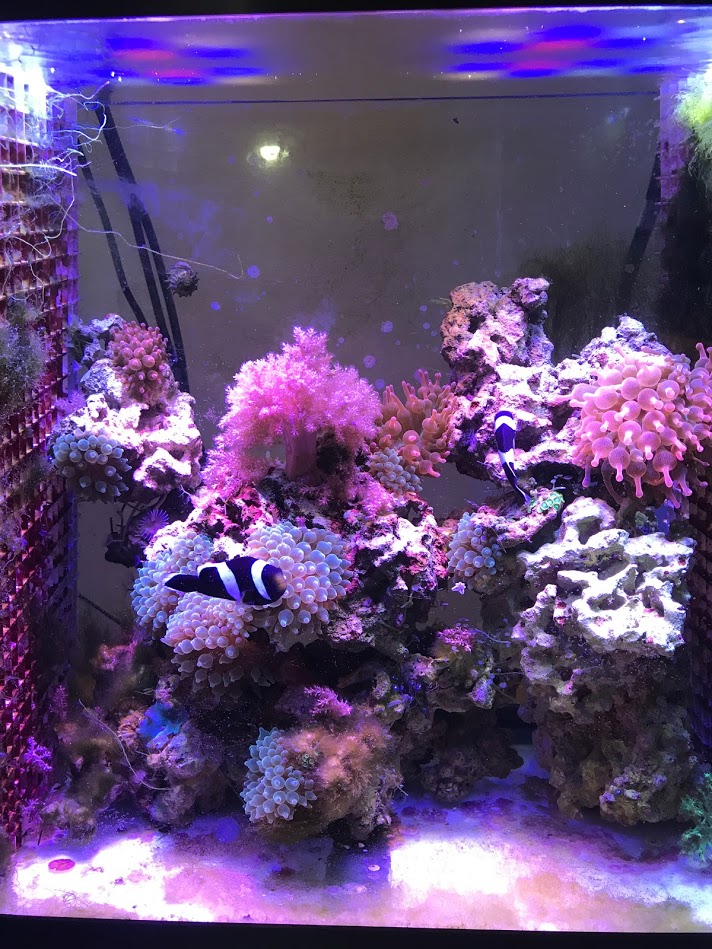 The hair algae bothers some people. But since I don't have any filters and only rely on the LR, it will have to do. I'm down to one 4 gal bucket water change every 3 weeks. I don't monitor any tank parameters, hence the low alkalinity/lack of coraline. 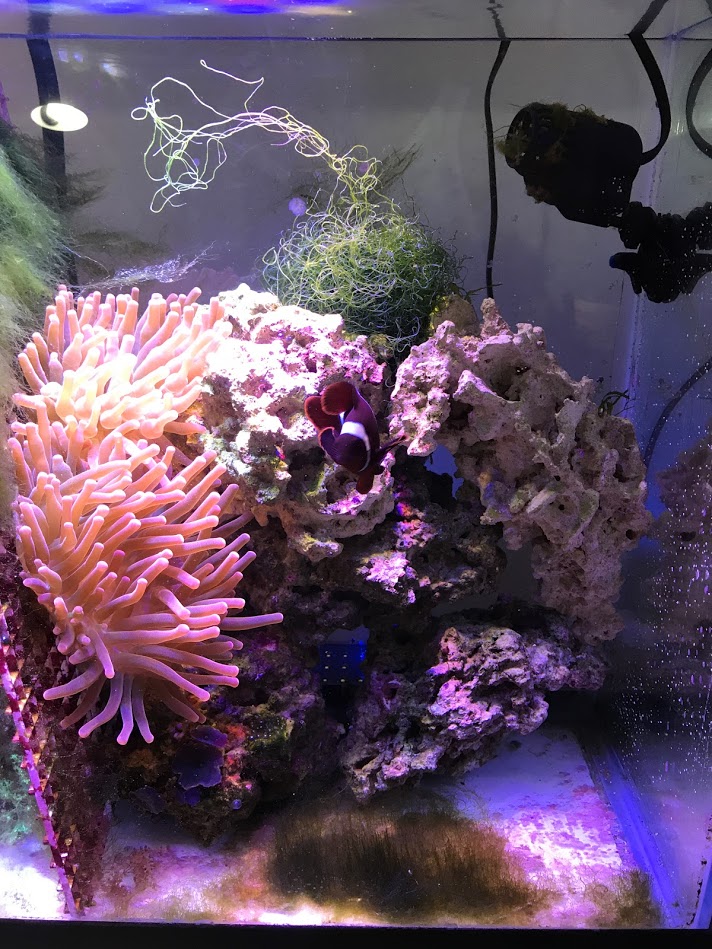 The cyano in this tank died out as per predicted. I did not dose anything to get rid of it. Now battling bubble algae. 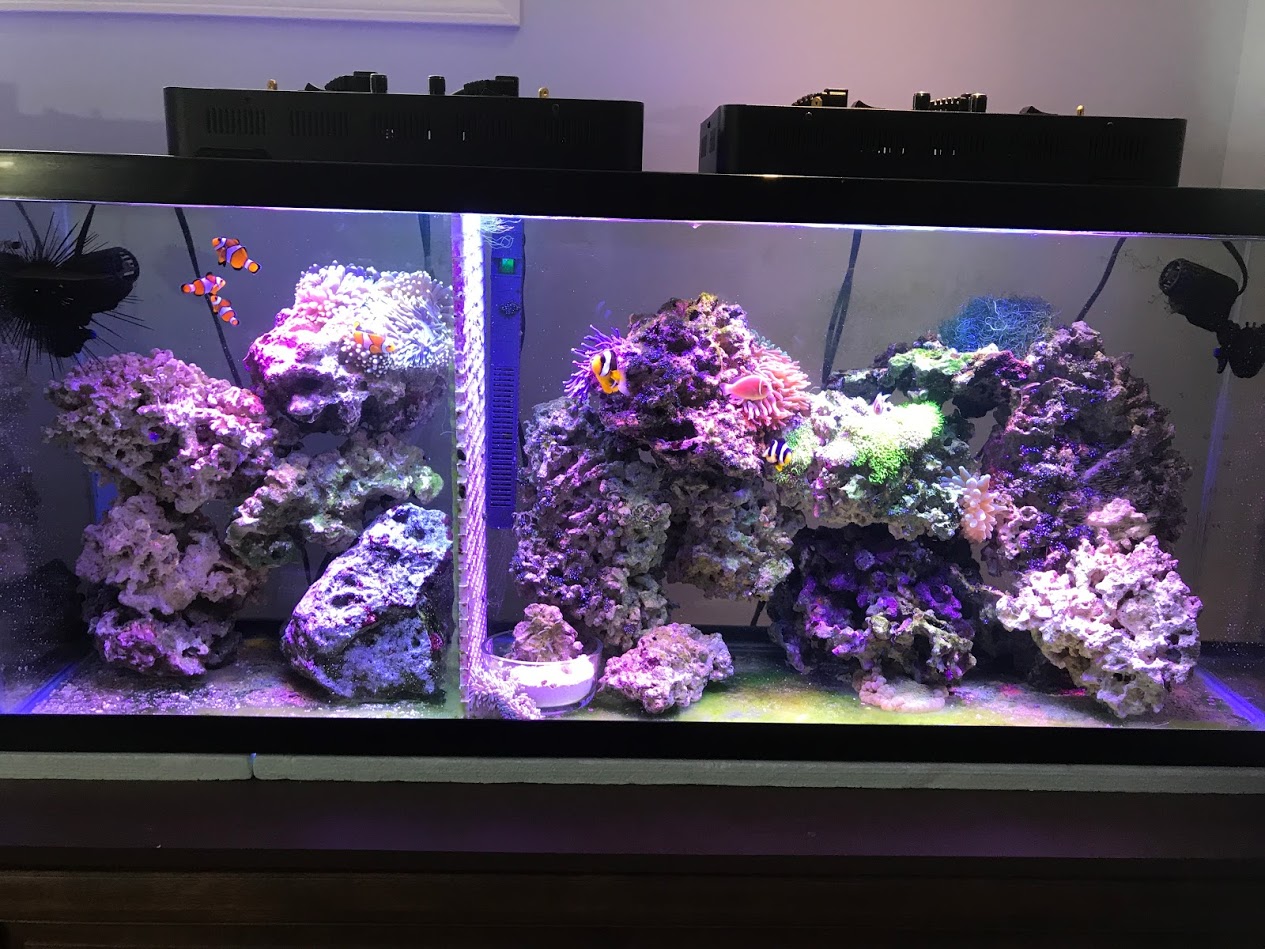 The smaller clowns grew slightly. But are still very similar in size from when I got them in December. 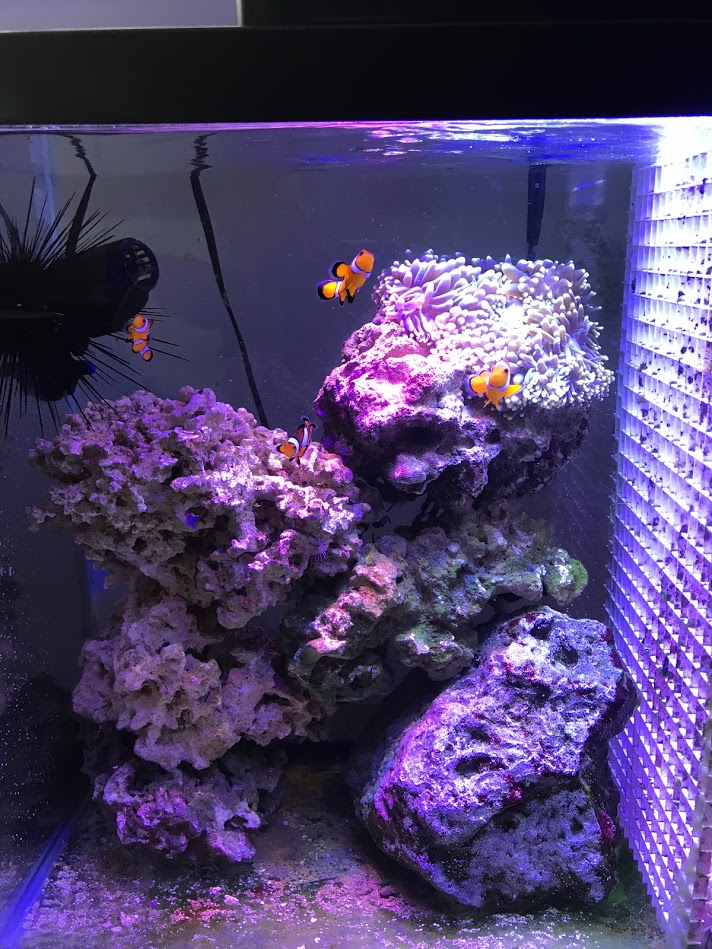 I added 3 BTA to this side. The Clarkii and Pink skunk still get along. The two Clarkii actually host the carpet anemone now. 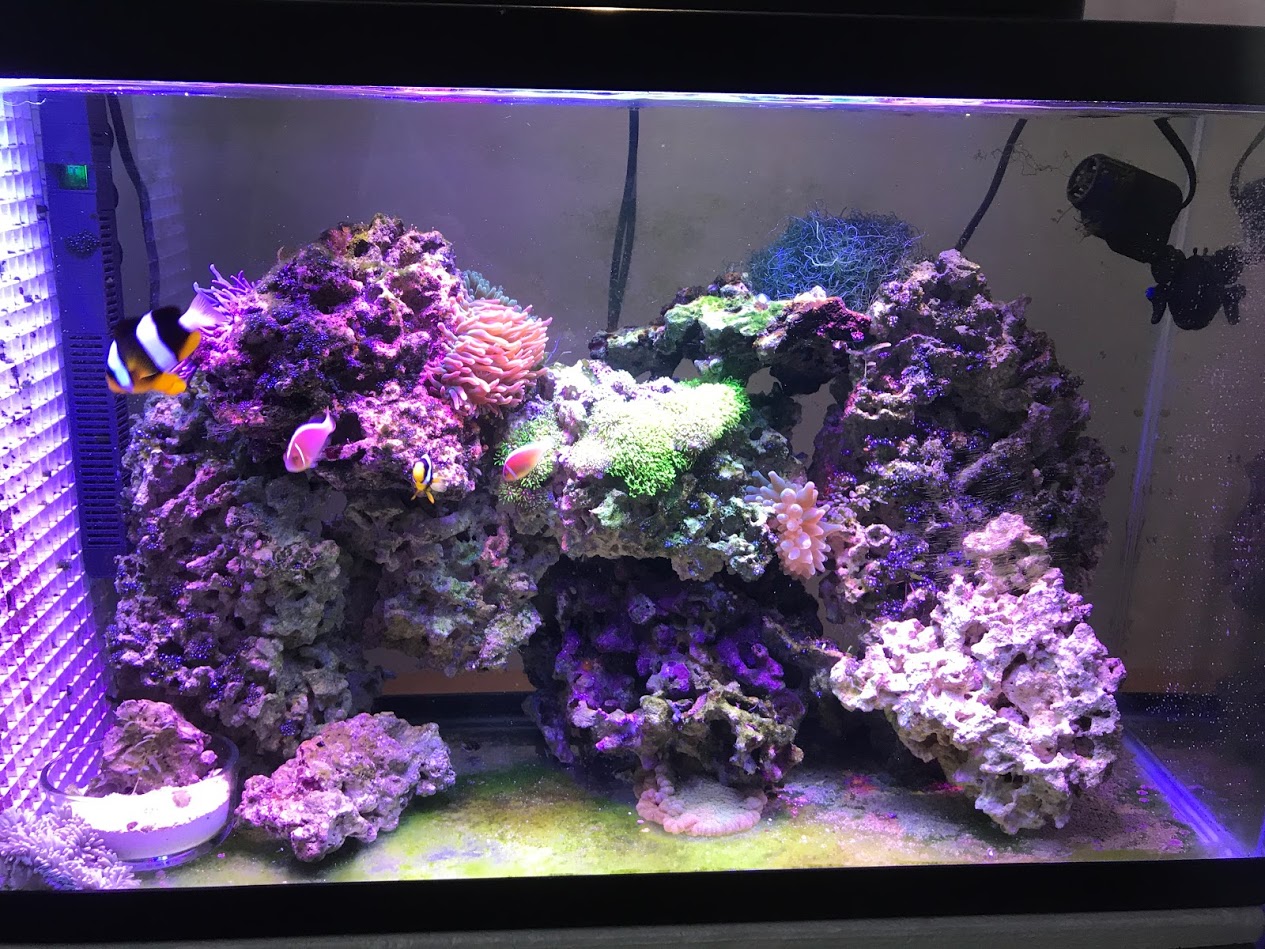 The sebae is not doing well still. It was in the sand bowl but the Clarkii keep pushing it out. I don't think it likes being hosted. Same goes for the pizza anemone. It is now very small. 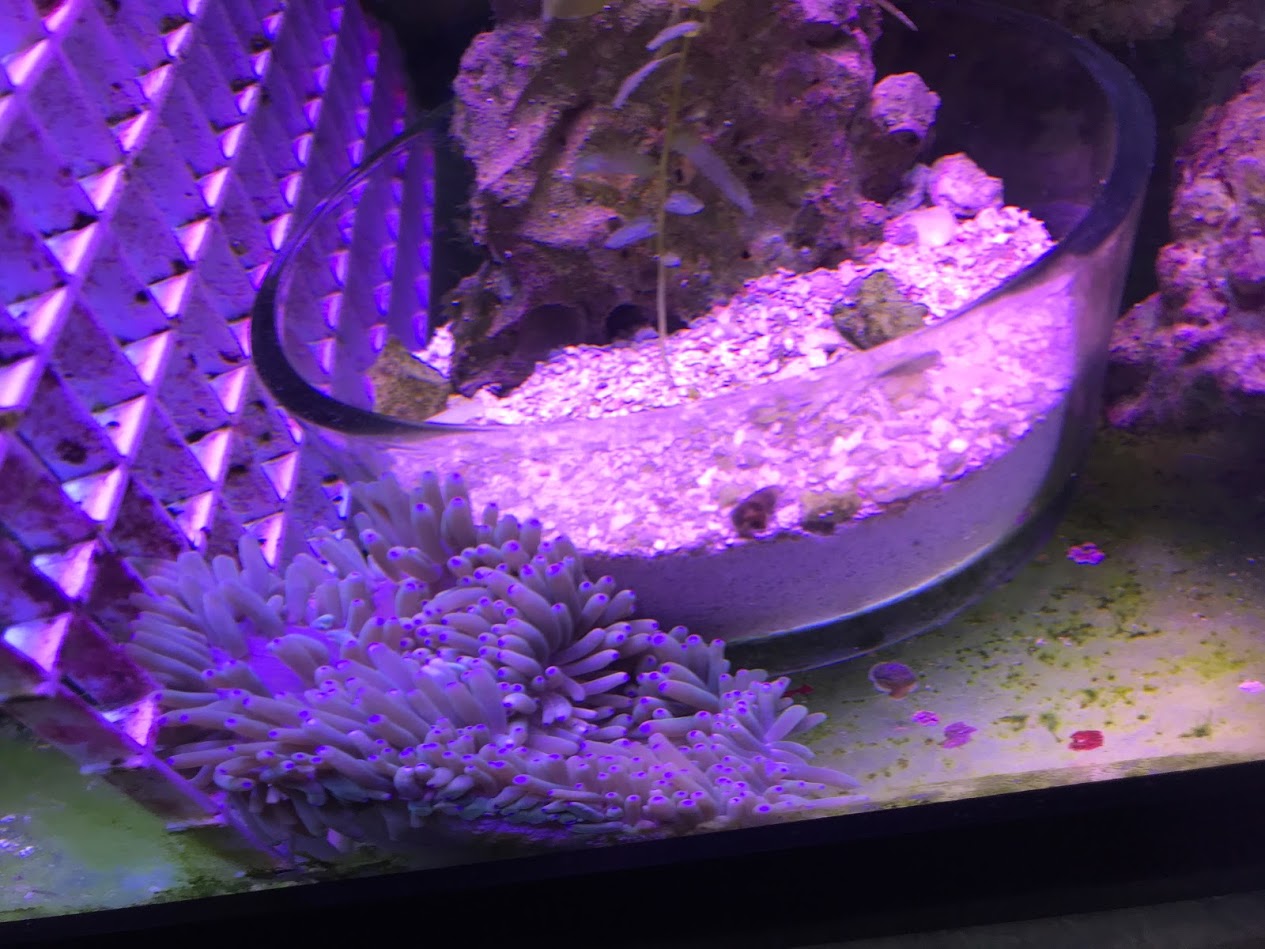 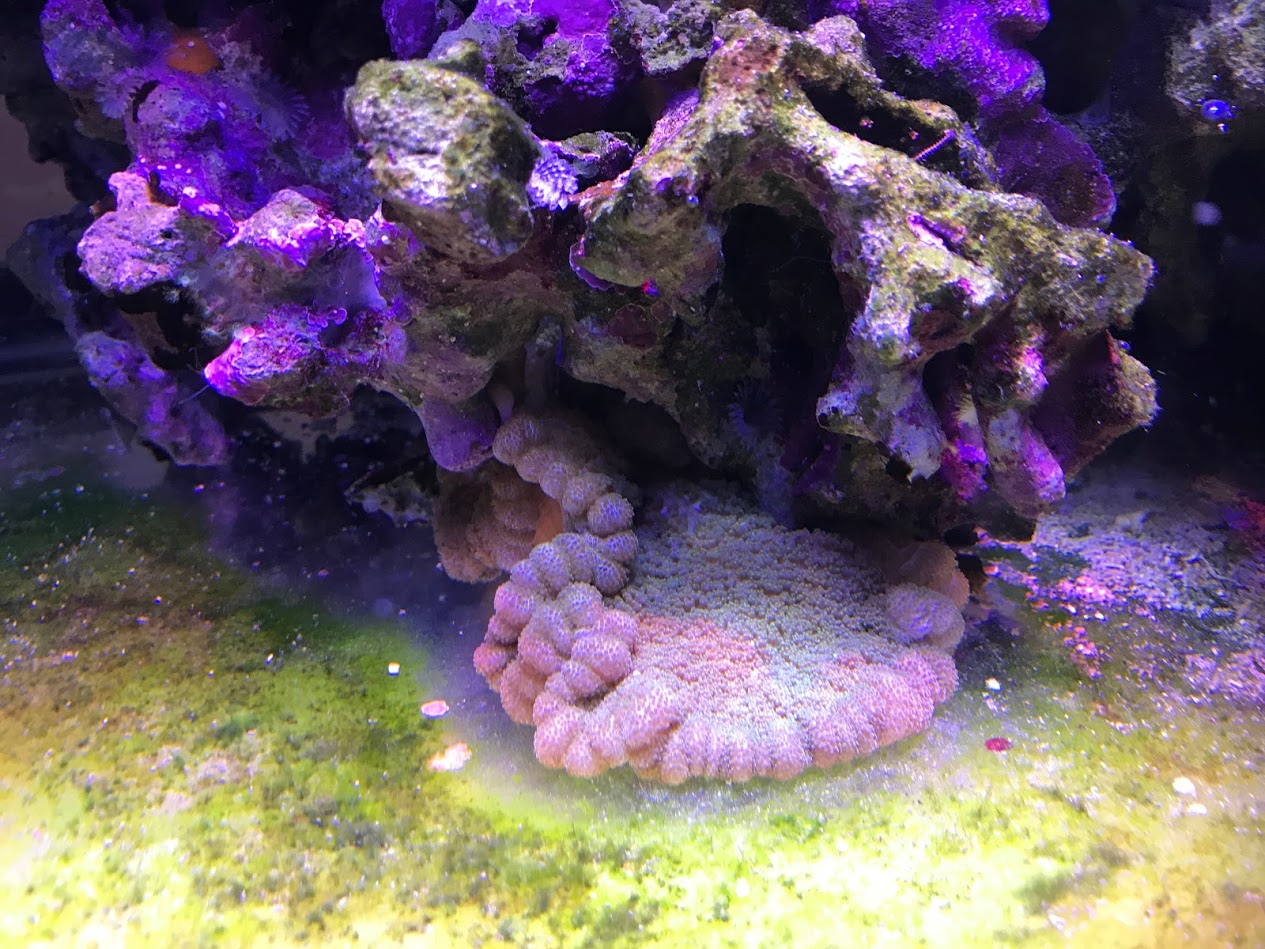 I think I will stick with BTA from now on. It's $120 per anemone where I live.

chizerbunoi said:
I have now witnessed chemical warfare between two different BTA. In the photo with the pair of tomato clowns, the large green one pretty much got destroyed by the RBTA behind it. It's only 1/4 the size it used to be. The tomato's still lay eggs every 14 days.

Interesting. I would not expect the same species to exhibit warfare. Have you seen this before (since you have so many together )?

This is the first time that I have witnessed this. I heard and read about other peoples wild species causing this. But both of these were from splits.

Here you can see the RBTA moving in, overtaking the GBTA. I guess it lost though as it moved back to the heater now. This is over a period of 2 months. 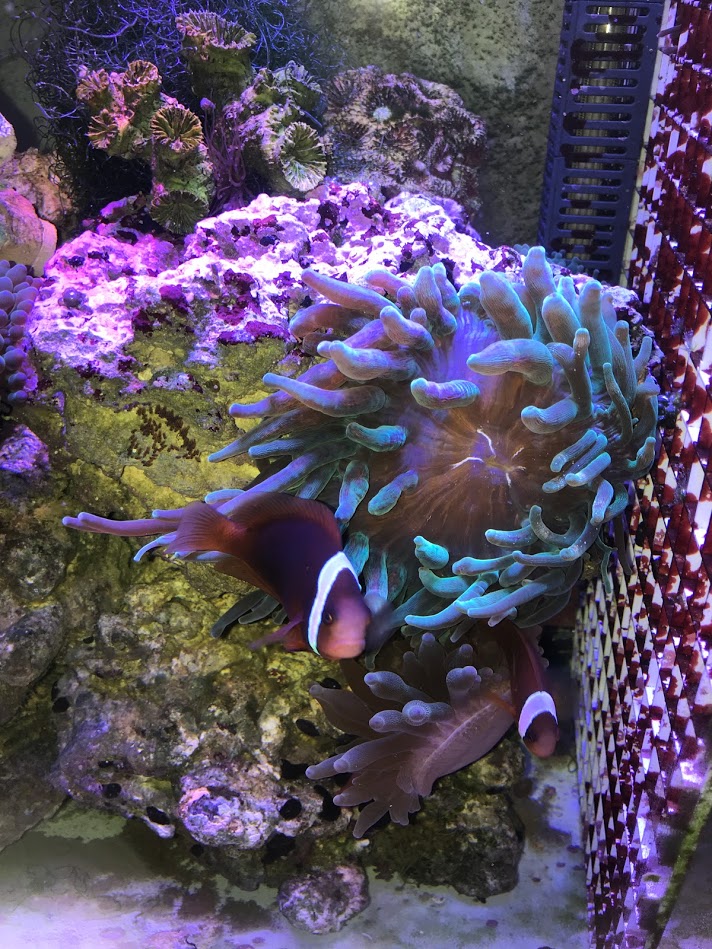 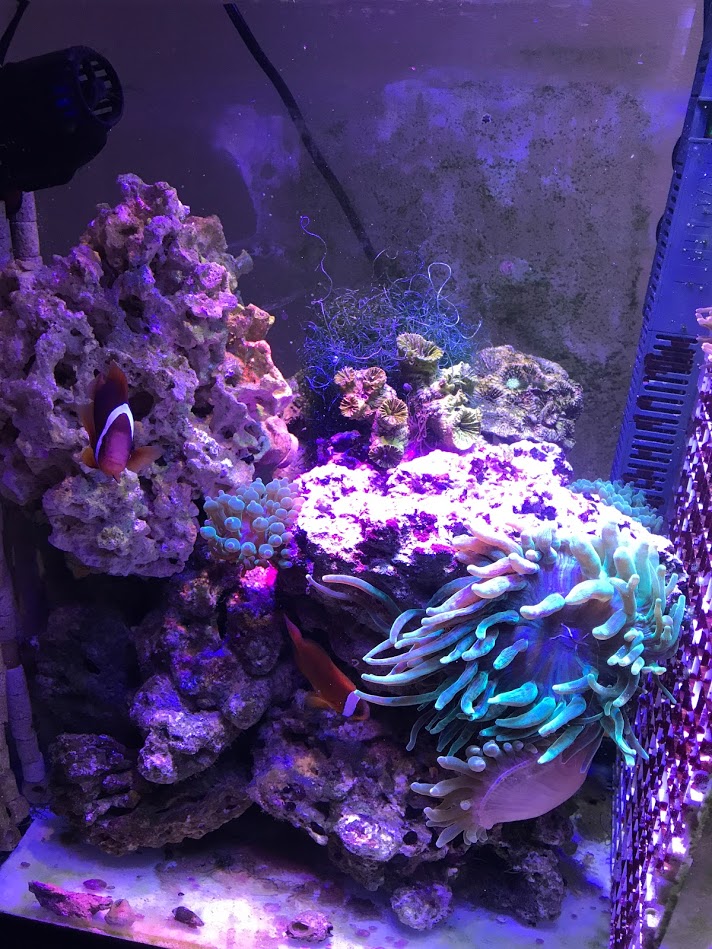 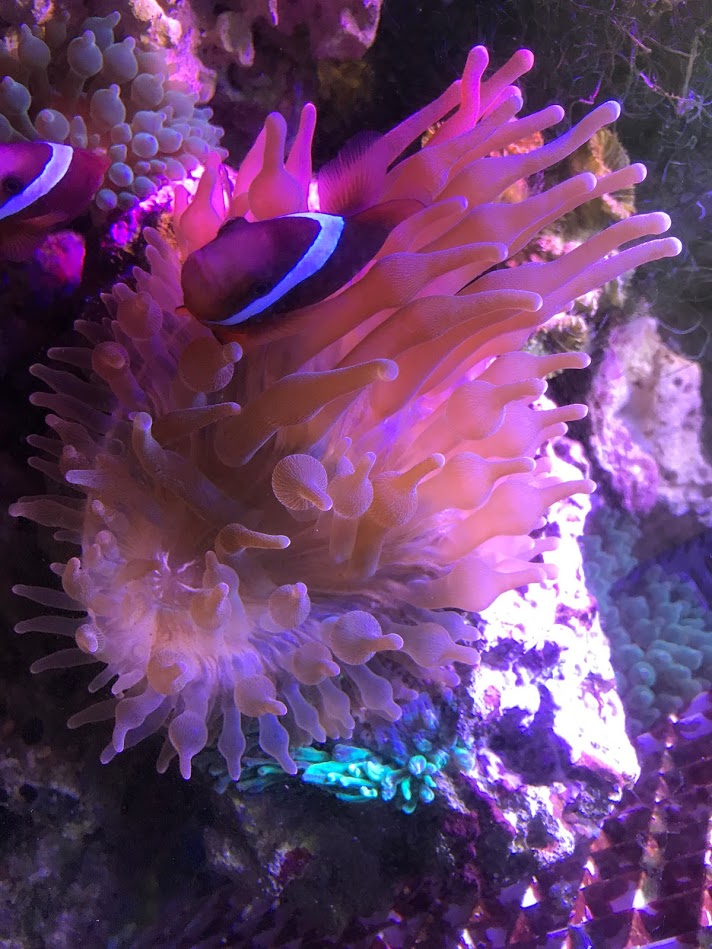 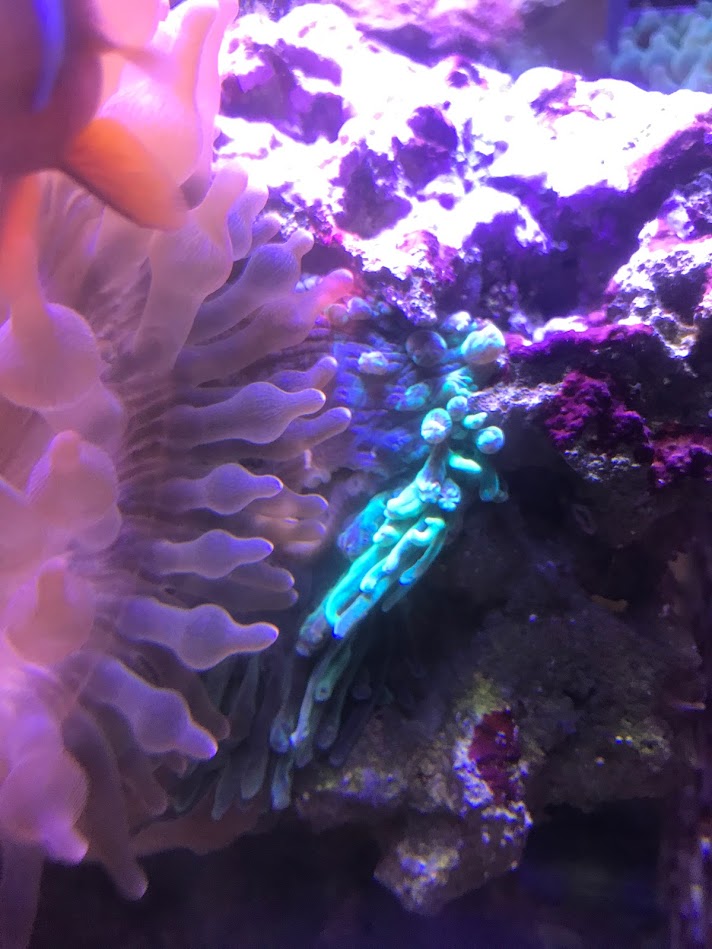 Crazy. Always something new in reefing.

Well with a new baby life sure gets busy. I never got the chance to upgrade my tanks to something larger. The tank is still kicking around but with maintenance once a month. Since it has such a high bioload, and no form of nutrient export, it's a refugium now. I don't use carbon/GFO anymore. Pretty much all the only anemones that made it are the BTA and the Condi. Everything else died off. All the clownfish have paired off, but only the Tomato and Clarkii are breeding.

Pics from new iPhone which I have no idea how to adjust the image lighting. There are probably over 60 anemones now. The big ones spread to over 10" wide. Lots on the top back rockwork which you can't see. I don't even feed the anemones much. I put food in and the fish feed the ones they favor to host. To get them to split, just raise the salinity to 1.028 and then perform a water change where the salinity drops to 1.025. 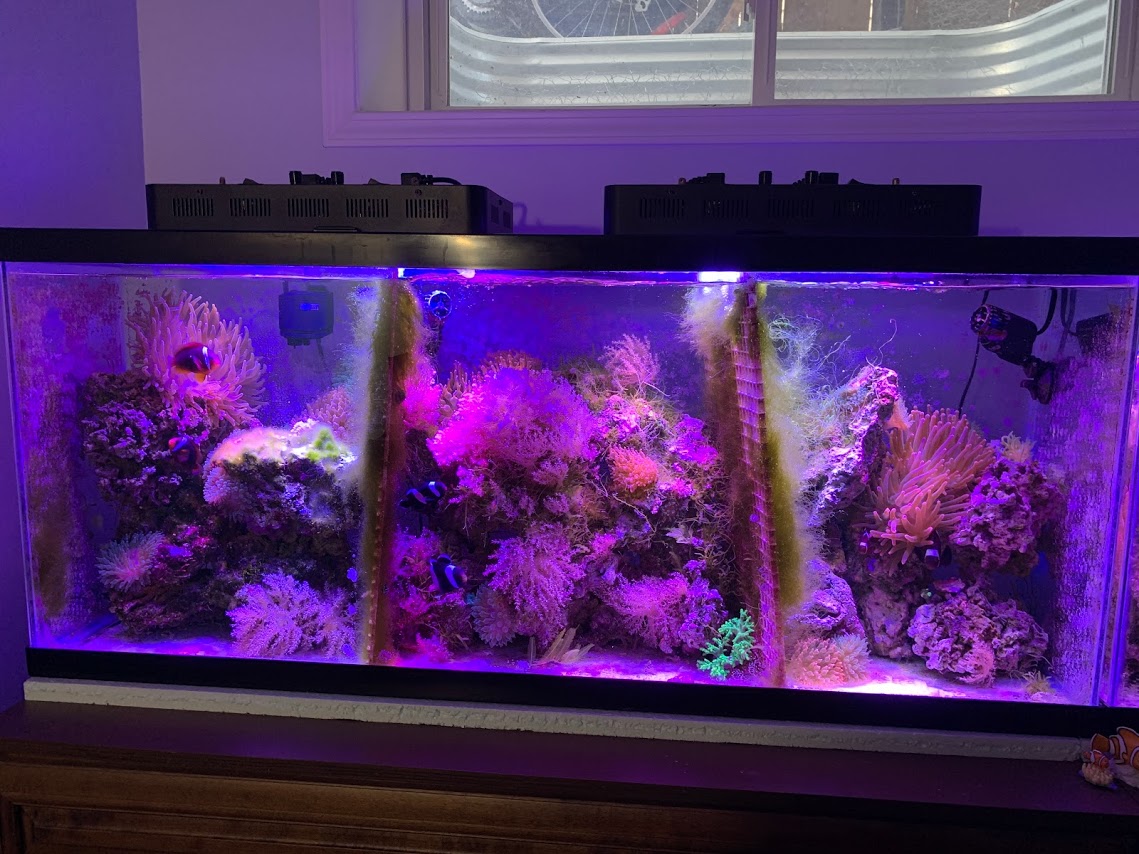 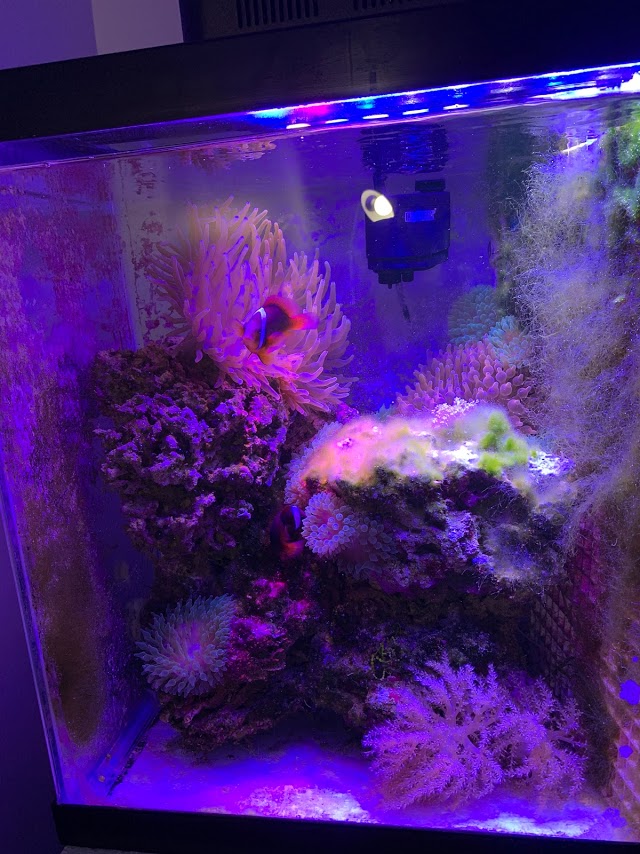 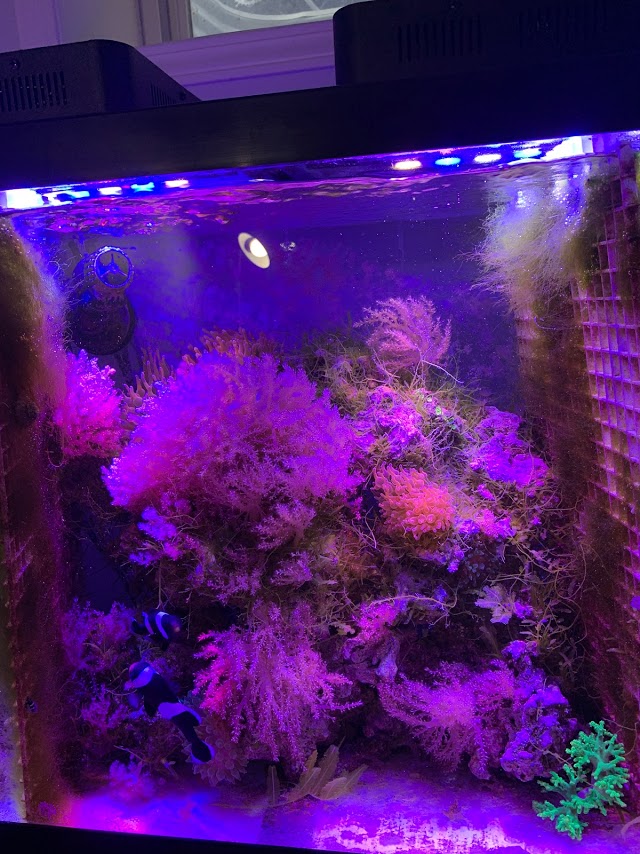 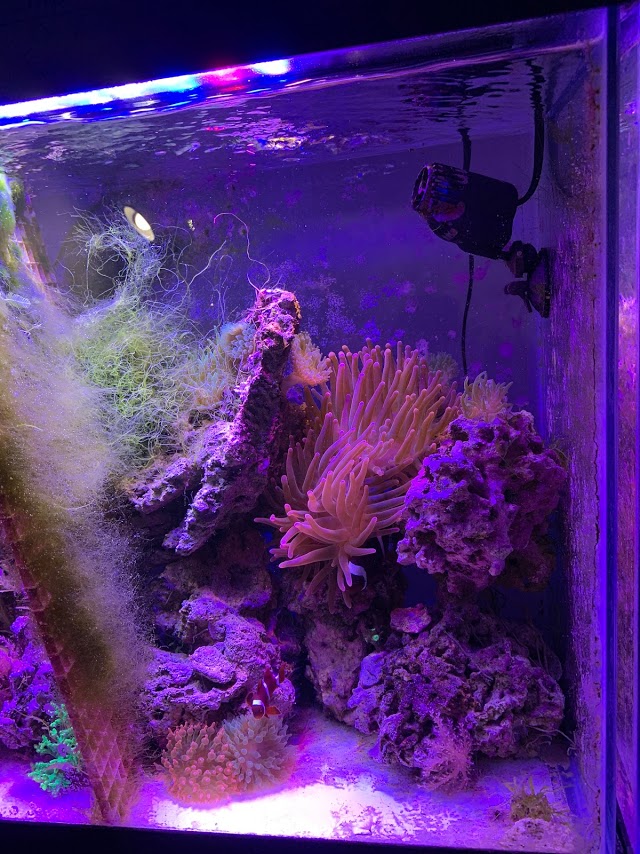 Maintenance
Daily - to feed the fish
Weekly - top up the water
Monthly - clean the powerheads, remove as much manual algae and perform a 8 gallon water change. 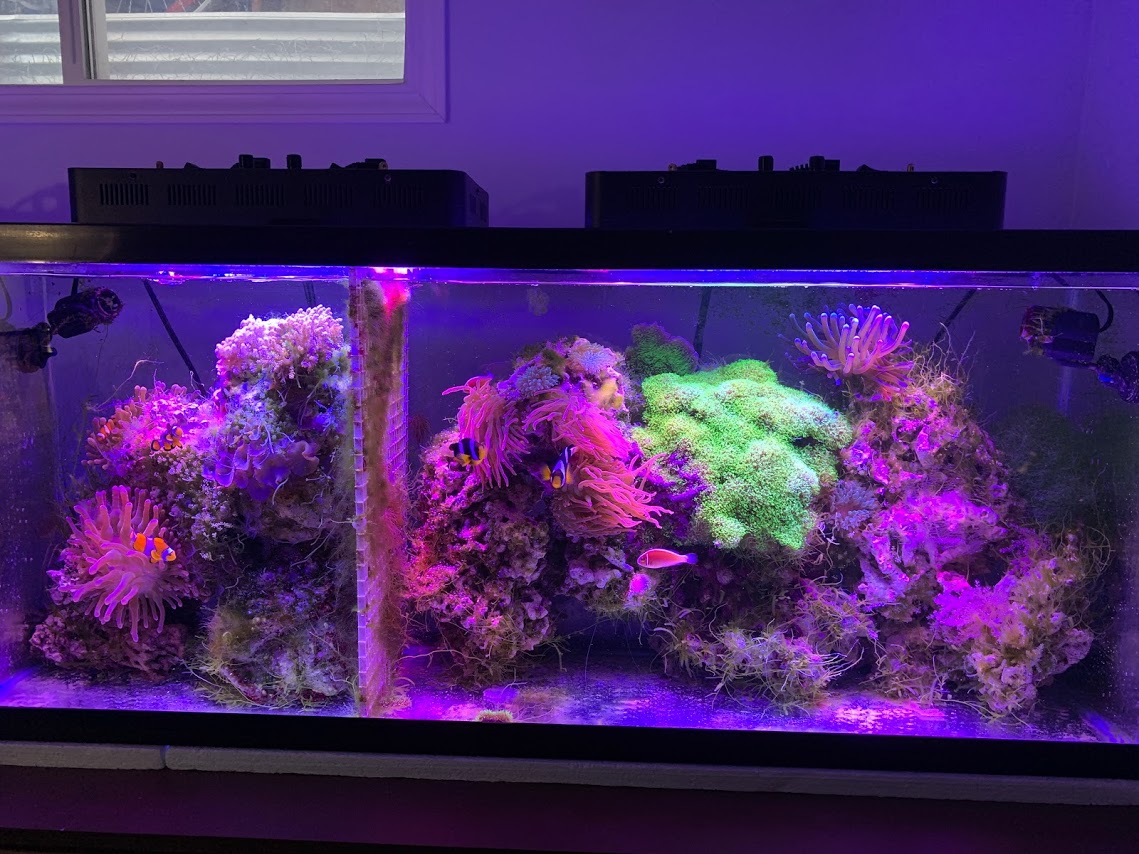 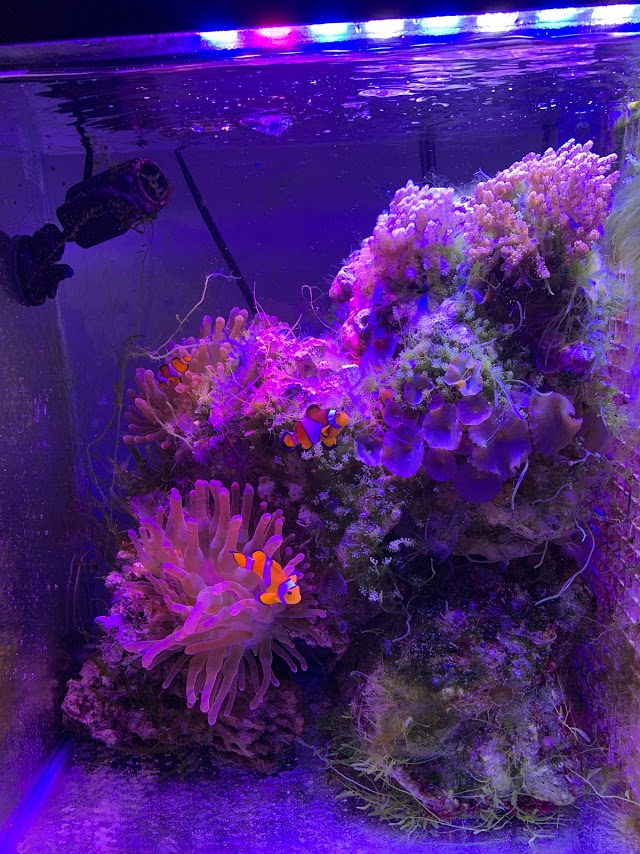 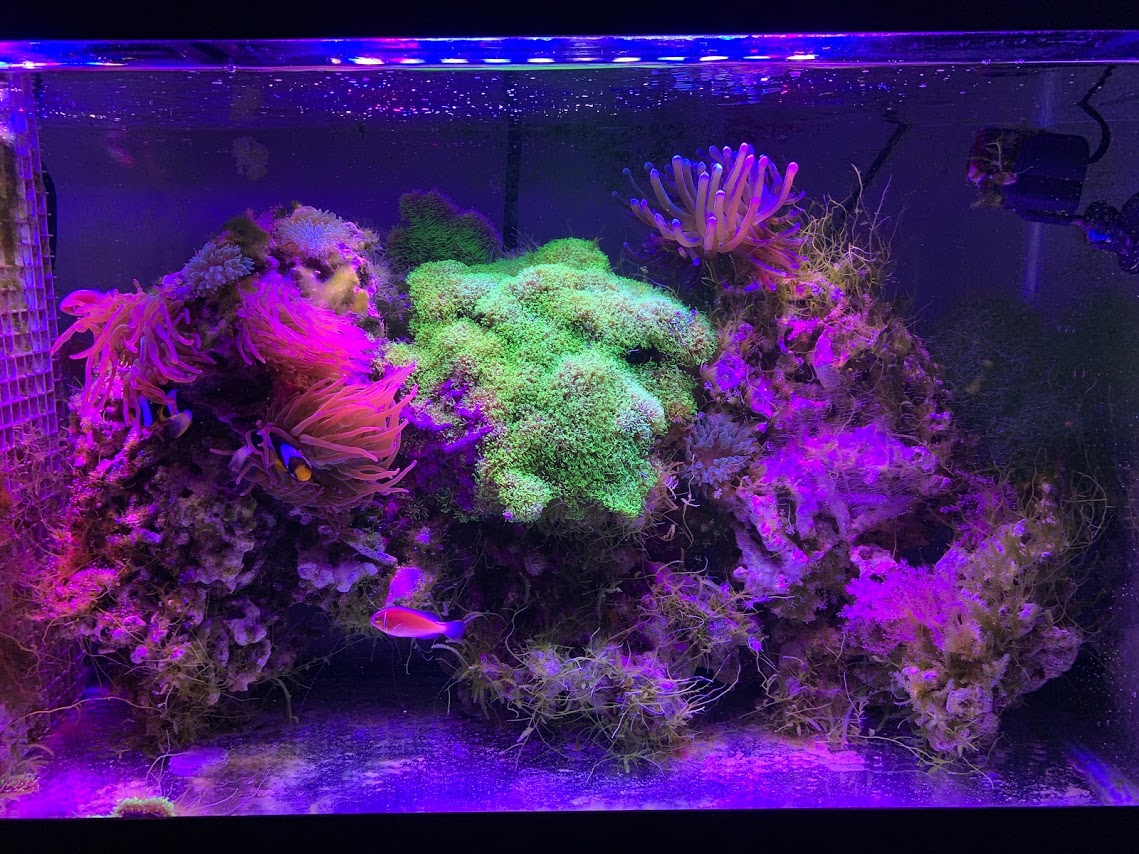 The BTA'S manage to keep the GSP in check?

The new fish on the block

Do you still have the Mag?
OP

The green star polyp is invading on the anemones. Even though the anemones sting it, it still keeps growing. I am going to have to pull it off that rock and put it on the ground.

The sebae died which then caused the mag and then the pizza anemone to die as well.
OP

I don’t know how to take pictures of my tank anymore. With the new phones, everything is just blue or red and saturated. Here is a video instead.