About 12 hours ago one of my 2 x 200W Cobalt Neotherm heaters exploded/cracked leaving a very nasty smell, tripping and killing my GFCI outlet. I immediately removed the heater, did a 30% water change replaced carbon, added poly filter, and cuprisorb. So far everything is *still* alive as far as I can tell. Among the many issues is that my water for the water change wasn't up to temp bringing it down from 79F to 74.9F in about 1 hour. It's the middle of the night and it's hard for me to tell how things are going, but I think the water change was necessary.

I had this heater since 09/2019 (bought from liveaquaria) and it was manufactured on 09/2018. I did do a search and it seems this is a well-known issue with these heaters, but I also read that whatever manufacturing defect should have been resolved in later batches. Has anyone encountered this issue with later batches?

My GFCI outlet is also completely dead; in that, it won't reset any more. I'm assuming it's some safety feature for the outlet itself but could there be another cause? The circuit breaker did not trip. I have an external GFCI that I'm using with another outlet for the time being.

Figuring out the hobby one coral at a time

Well known issue with those heaters.

GFCI is probably toast, as once they are really tripped(not a false trip)I find they don't like to reset.

I did read you can try and "dry" them out with a hairdryer, but I don't know how well that would work in your situation as the outlet itself did not get wet. I would just replace it if it won't reset.

I am not an electrician I have no clue what I am talking about here ,, I have / did ,, two of the 300 watt heaters on my 150g system ,, one was two years old and the other one years old ,, I just replaced both of them yesterday with a new heater from BRS ,, one of their heaters ,, the 2 year old heater wasn't working ,, my system got up to 84 ,, removed it ,, the newer heater was keeping the tank at 78 while I had a new heater on the way ,,

Not sure it was the only reason ,, but the tanks water got to cold before he got home from work ,, I thought if I plug the heaters straight into the non GFCI wall outlet ,, if the power strip ever tripped on me ,, at least when the power came back on ,, it would at least keep my tank to temp ,, I have Eco Tech power heads and return pump ,, they are on Eco Techs battery back ups ,,

Back to the point on hand ,, the double non GFCI outlet I had the heaters plugged into ,, the socket I had the 300 watt heater that quit working right plugged into ,, had power going to that heater ,, once I un plugged the bad heater ,, and went to plug the new heater into that plug ,, its now not getting power ,, the second outlet on that plug was still getting power ,, I didn't use it however ,, I have the new heater plugged into the GFCI power strip ,, I have nothing plugged into the non GFCI outlet ,, better safe than sorry ,,

Normal ,, not normal ? I will get a electrician out here to take a look ,, second question ,, since the GFCI outlet is a couple years old ,, should I just have the electrician replace it when he comes to check on the non GFCI outlet?
Last edited: Apr 23, 2020

So sorry OP. Sounds like you caught it early and may not much damage. I’ve read a few posts about these heaters busting unfortunately. I think you should have the gfci outlet replaced, it did exactly what it was supposed to do.
OP
J

Thanks for the responses. The GFCI is dead for sure, getting an electrician to check it out.

So far the tank is okay. The skimmer pulled out a lot of stuff. I suspect the resin/epoxy in the inside of the heater is nonpolar/hydrophobic.

its time this company refund anyone who bought this brand of heater. post results are shameful, shameful NeoTherm. I ditched their 50 watt before it could kill my old nano.
Last edited: Apr 23, 2020

I have a neo therm 50 watt that is stuck on ON position after less than a year of use.

I use Eheim now with my apex.
J

It seems to be a particular problem with the 200W model. I've read many of the posts on these explosions and it always seem to be the 200W

The lower watt versions seem to be fine. I have had about 6 100W model, while three of them have gone bad and replaced under warranty, never an explosion.
Last edited: Apr 23, 2020

Had the same thing happen. Switched to JBJ True temp Titanium & it's been going strong for 3 yrs.
C

I would still utilize a powerstrip. It creates an extra backstop and usually prevents the GFCI outlet from frying. The average powerstrip is not built for the high wattage utilized by our tanks, esp. from lighting. Not sure what kind of powerstrip your friend was using or the load put on it, but if he had a standard $5 powerstrip I could definately see the strip tripping because when power comes on a line with a large load on it you get an additional surge on the line. Forinstance, a powerhead can take anywhere from 13-25 wats... when plugging in you get surge close to 25 but stabilizes somewhere in the middle when operating depending on mode, speed etc. If you get an industrial strength powerstrip. Typically in the $40-60 range, these are built to withstand a high amount of wattage and a high amount of joules to prevent it from tripping in that scenario.

Thats terrible of them considering the 200W is one of the most popular sizes.
OP
J

Picture of the split. 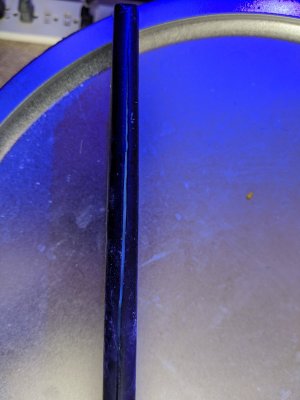 Do you even Reef bro?

I have a 100w in my mixing container because it’s broke and stuck on 94 degrees. It fried my tank awhile back making it reach 88 before being noticed. Now it sits in my mix station keeping the salt water warm. I like the slim look and set and forget with the thermostat light. But this is scary

I have the same heater but the 100w version , less than a year old. It flat out would turn off I would have to unplug it and replug it to get it to work. Replaced it with a different brand no problems since. It’s now my water change heater.

That does it! I've always had my suspicions about the small 50 or 75W model I have. Got it because it was small enough to fit in my sump. My main heater is a Hygger 200W titanium that seems very solid but I need a backup so maybe it's time to upgrade?

as a thread pattern watcher 24x7 long time = i w never go back to this brand of heater.

Are they those plastic heaters?

Every lfs around me recommended those heaters, but thanks to R2R I avoided them for this reason. I've had 2 1eheim Jager on my tank for close to a year now with no issues whatsoever
C

you can never go wrong with a titanium finnex