Starting build thread for my first Reef build. This will be an ongoing project as parts are still in route.

This build has been nothing but delays and frustration. However it's not breaking my spirits.

After finally getting the tank and stand in. Fiji only sent it with two brackets instead of three. Making it a royal PIA to get the door level. It's not perfect but I'll call CS in the AM for a replacement. 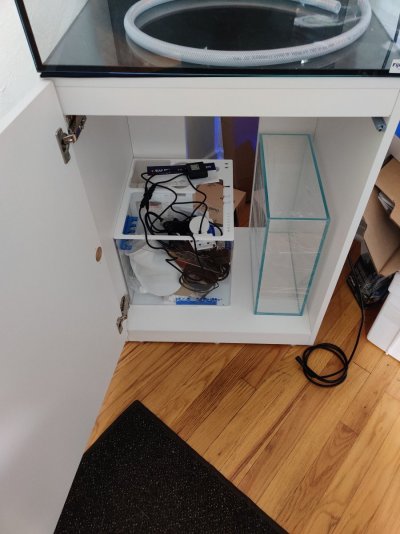 I will post all the pictures here. On week 3 of waiting for my tank to ship from Fiji.
OP

RMS mount for the XR15 doesn't fit well. Using it as suggested without the spacer caused it to droop and be unlevel. Trying to tighten the mount resulting in my tank glass cracking.

Starting the plumbing and leak test tomorrow. Hopefully can start the cycle early this week.

Update: Bit behind schedule due to work. Finished the return plumbing and glued all fittings except the final connection to the bulkhead in the sump. Glued the tank bulkheads into the 90 and thinking I probably shouldn't have. Any issues ill have to cut it out to remove the bulkhead from the tank. That's why I left about an inch of pipe exposed between the bulkhead and the 90.

Fiji Cube cut the return hole on the sump to fit 3/4'' bulkhead an also included the 3/4'' bulkhead but didn't send the 3/4'' to 1/2'' reducer. Not sure why they do this? Either cut the sump for the 1/2'' or make the tank return holes 3/4''. Fiji is supposed to send out the reducers but being impatient, I went to homedepot.

Having already purchased 1/2'' barbs and hose for the pump to return, I wanted to make them work. Not being able to find a 3/4'' slip to 1/2'' female thread for my barb fitting lead me to get creative. I went 3/4'' to 1/2'' then 1/2'' to 1/2'' female thread then to 1/2'' barb. This dropped it pretty low into the sump forcing me to loop the hose into the pump barb. Overall I'm not really happy with this because I'm not sure if it will add to head loss and it's harder to get the pump out for maintenance. I left all of those pieces unglued so I can change it when I find the right fitting. In the meantime if they leak it should be minor and right back into the return chamber on the sump. Hard to see in this picture so I'll add a better one tonight. 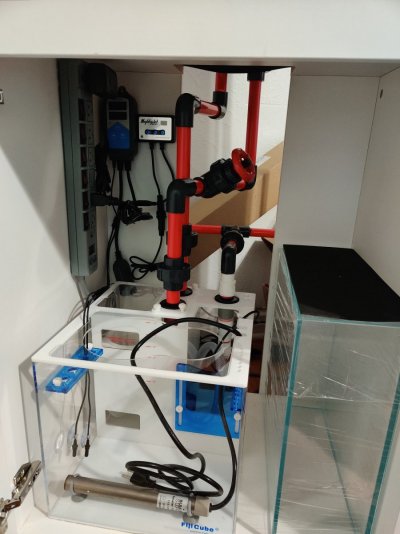 Update: Dry fitted all of the drain lines in last night. Tonight I'll go home and glue them and possibly do a leak test tonight if time permits.

I'm leaving the final piece into the sump bulkhead unglued. Everything else will be glued together. I also glued the main drain into the overflow bulkhead and probably shouldn't have done that. On the emergency side the blue pipe is actually what comes to be used as the E-Pipe in the overflow. I put it on backwards when dry fitting it and for the life of me can't get it back out. So I just used it for the other end and cut a piece of red pvc for the overflow. Since I couldn't get it back apart that means its not glued. But I seriously doubt its going to leak since its so tight. I didn't glue the red E-Pipe into the bulkhead inside the overflow. The blue pipe between the bulkhead and the union is also not glued so we will see how it does. 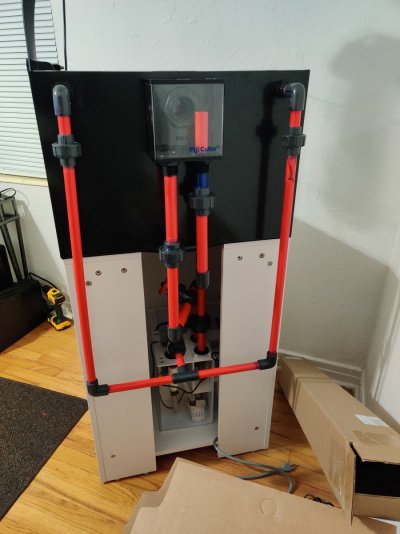 Update Friday 9/24/2021: preformed leak test tonight and ran until Saturday afternoon. No leaks detected and overall happy with the plumbing and flow.

Tuned the overflow a bit to learn the basics. Will have to dial it in more when the saltwater goes in.

Tested the lights and heater. All work well so far.

Update Sunday 9/27/2021: Rock, Sand, and Saltwater added today. I'm not 100% sure I'll keep the rockscape this way but my lady did design a cool cave on the left side. Should be awesome for the YWG I plan to add.

The foundation and arch are all glued together. The rock on the front right and back left are slightly away from the main arch. I plan to use one as a zoa garden and the other for anything in the future that needs isolation.

I have it slightly angled so water should be able to flow around circular and through the pass through. Still haven't decided on the power head. MP40 or Nero 5. Any suggestions?

Birthday Update 9-27-21: Tank ran all last night and cleared up nicely. Dr. Tim's is going in today to start the cycle! Officially the birthday of my tank. So excited!

Day two following the Dr. Tim's chart. First test came back and follows. Cycle has been ran without lights on so far. PH is lower than when tested on salt mixture.

All taken on Red Sea marine care test kit except for the DKH on the Hanna.

I'll check it out. I wish I could have gone larger but size is limited till we buy our house next year.

lagnew904 said:
I'll check it out. I wish I could have gone larger but size is limited till we buy our house next year.

I wanted to do a 6 ft tank but didn't have a good spot for one so got this one. Honestly the only things I have tested so far have been temp salinity ammonia nitrates and nitrites.
OP

Update: day 7 of cycle. Added half dose ammonia per Dr. Tim's chart on day 1 (Monday) and day 3 (Wednesday) I skipped day 6 (Saturday) does as my total ammonia is still off the red sea chart.

TAN by temperature 78.1 and pH of 7.6 shows roughly 0.05 which is exactly concurrent with my ammonia alert badge that monitors free ammonia.


Today's parameters show the cycle is continuing but the red sea test kit is maxed on total ammonia at 2.0, maxed nitrite at 1.0 and maxed nitrate at 50.

Added ceviche the yellowtail damsel last week 10-10-2021. The yellow tail damsel is the first fish I ever saw snorkeling and will always be a favorite of mine. I actually mimic the cave in my tank after a yellowtail damsel in a cave when snorkeling Fort Jefferson in Dry Tortuga national park 70 miles west of key west.