Thanks for joining my build and please contribute your suggestions! I'll cut straight to the chase:

My tank has been up and running for almost a month now. Let me backtrack and start from the beginning. Setting up my Fluval Flex 32 was pretty straightforward. 40 pounds of CaribSea Arag-Alive Fiji Pink Sand, 16 pounds of LFS Dry Rock, RODI Buddy 4 stage unit, Fritz-Zyme Turbo Start, a little pure ammonia, and Instant Ocean Sea Salt. I was off and running. My ammonia was off the charts after dosing and cleared within a few days. I also had issues keeping my temperatures down so I added a computer fan and an ink bird. This has allowed me to keep the temperature within one degree (plus or minus) of 78 at all times. I then added a JBJ ATO since I was losing more water with the addition of the fan. I added my first livestock 8 days after setup. A LFS Ocellaris. I didn't know what clownfish are supposed to look like before purchasing and quickly realized what bad shape he was in. He is clearly super skinny and had a pinched stomach. He still had a ravenous appetite so it took me about a week to realize he had issues that needed fixing. So I soaked his NLS pellets in tank water, diced garlic, Seachem Focus and Seachem MetroPlex. I continued feeding him this medicated food for 10 days (twice per day). During this time he has completely filled out!

Here is the before: 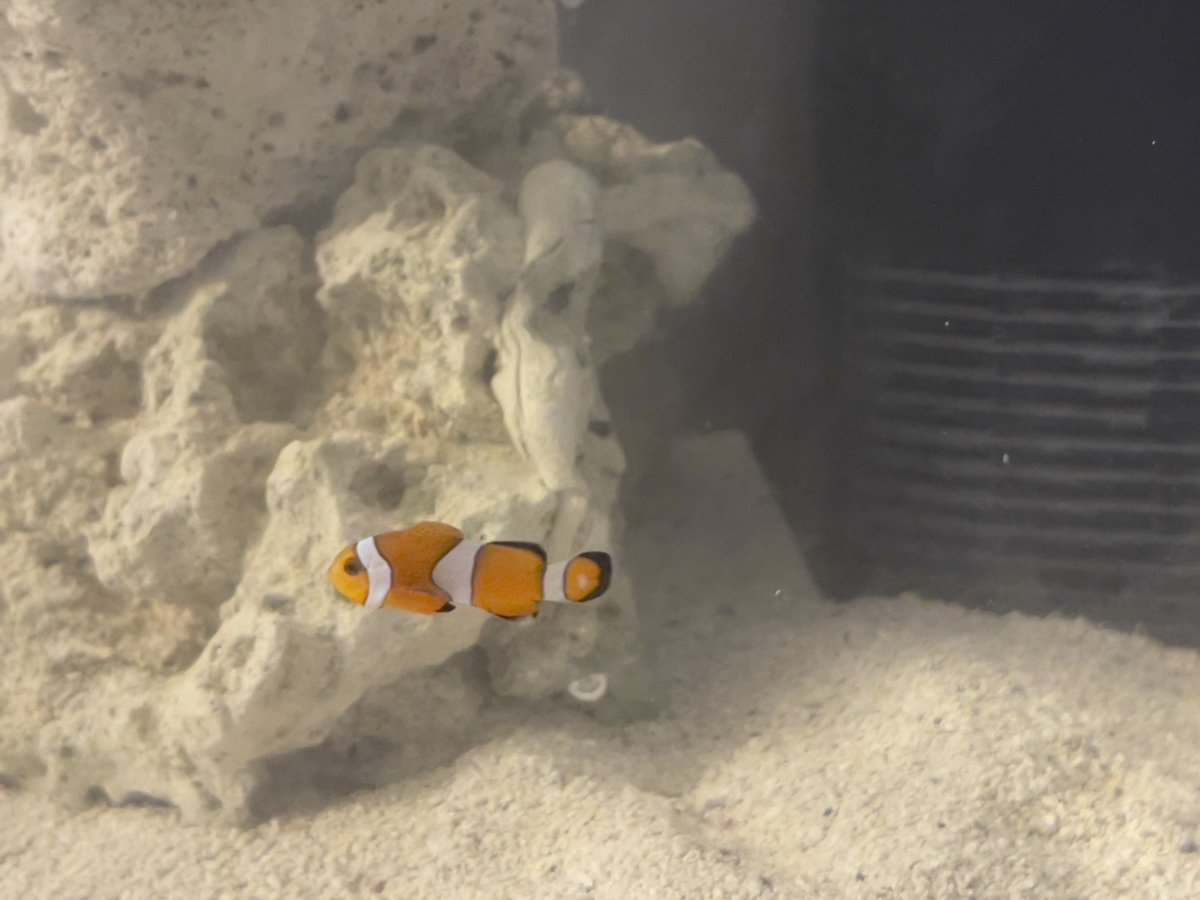 Here is the after. I've also started feeding him NLS Grow as these pellets are smaller and he can handle them better. He is also getting LRS Fish Frenzy about once per day and man does he tear this stuff up. I am hoping this combination will help him grow maturely as he is still only about an inch in length: 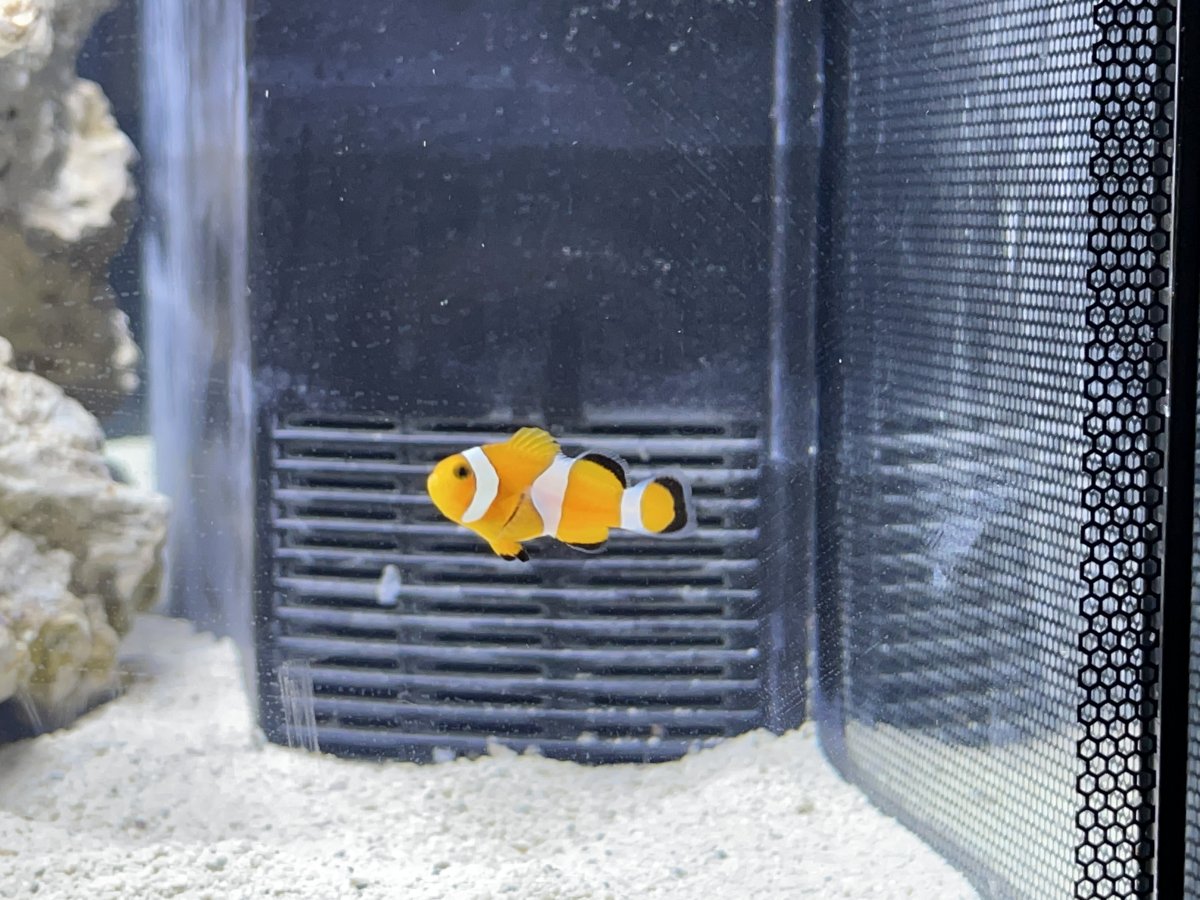 In the meantime, I started noticing some weird growth on my dry rock. NOTE: I had not been turning the lights on other than quickly for occasional pictures. The tank is in no direct sunlight and a pretty dark room. I determined this growth must be Cyano through a hydrogen peroxide dip. I resorted to manually removing the bulk of this growth. The remaining small bits remain and are not growing at all.

Here it is on the dry rock: 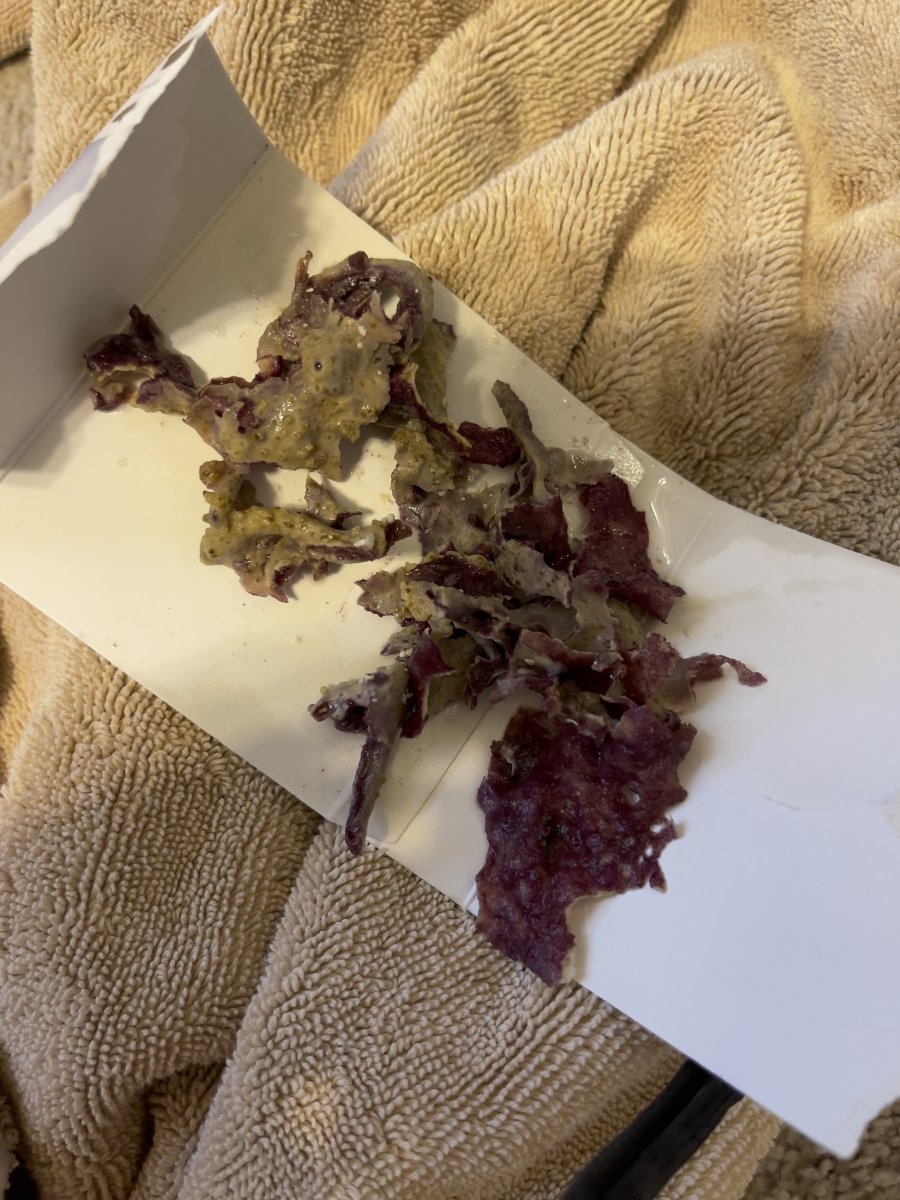 Other than these issues, the tank has been doing great so far. I am now just starting to see the first signs of the ugly stage about 4 weeks into the process. I also noticed some concerning signs in my clown. He started flashing and spending most of his time floating near the surface today which led me to the conclusion that he has Flukes (I will never go to my LFS again...). I gave him a 5 minute freshwater dip and he immediately showed signs of relief and normal behavior for the last couple hours. I am also treating the tank with PraziPro. I will dose again in 6 days after a water change.

Here is how it began: 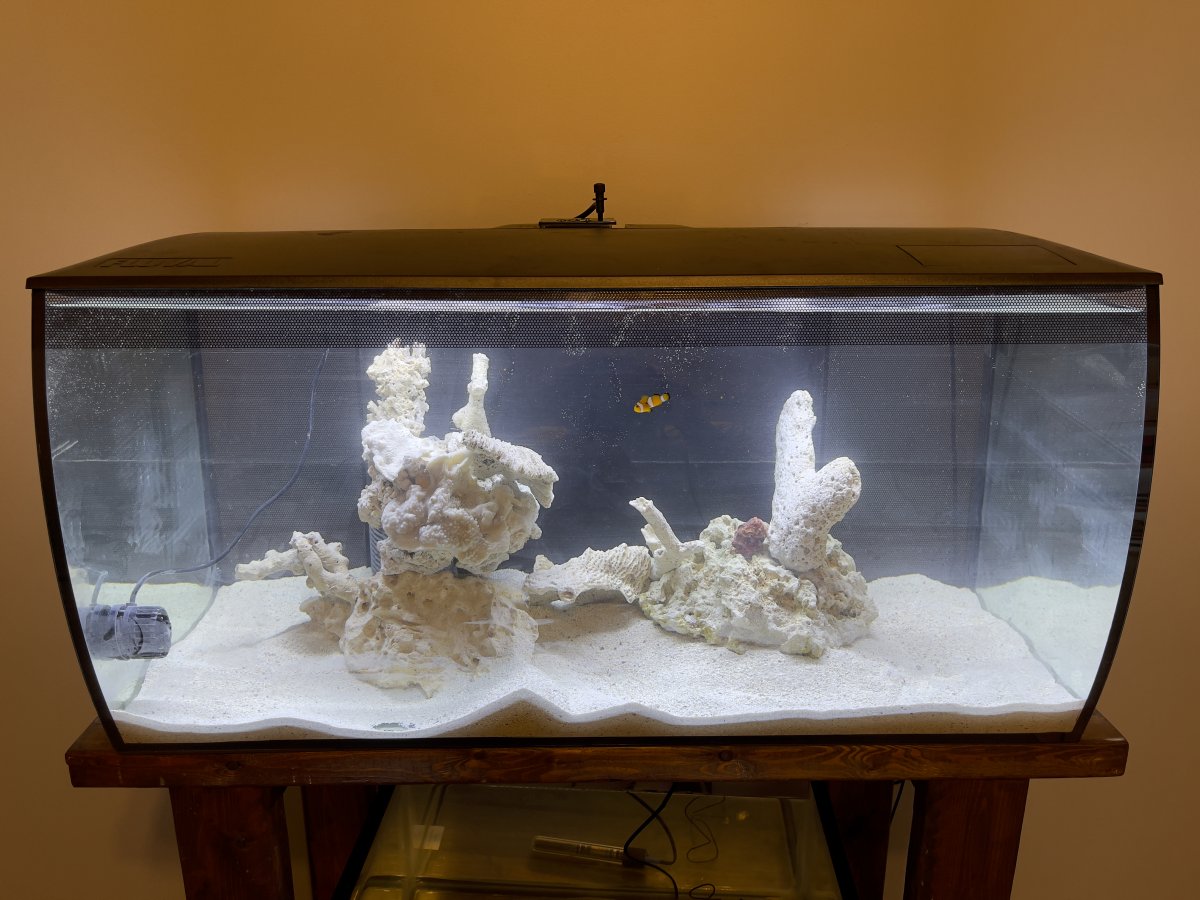 Here is what I have now. Which do you prefer? Any suggestions? 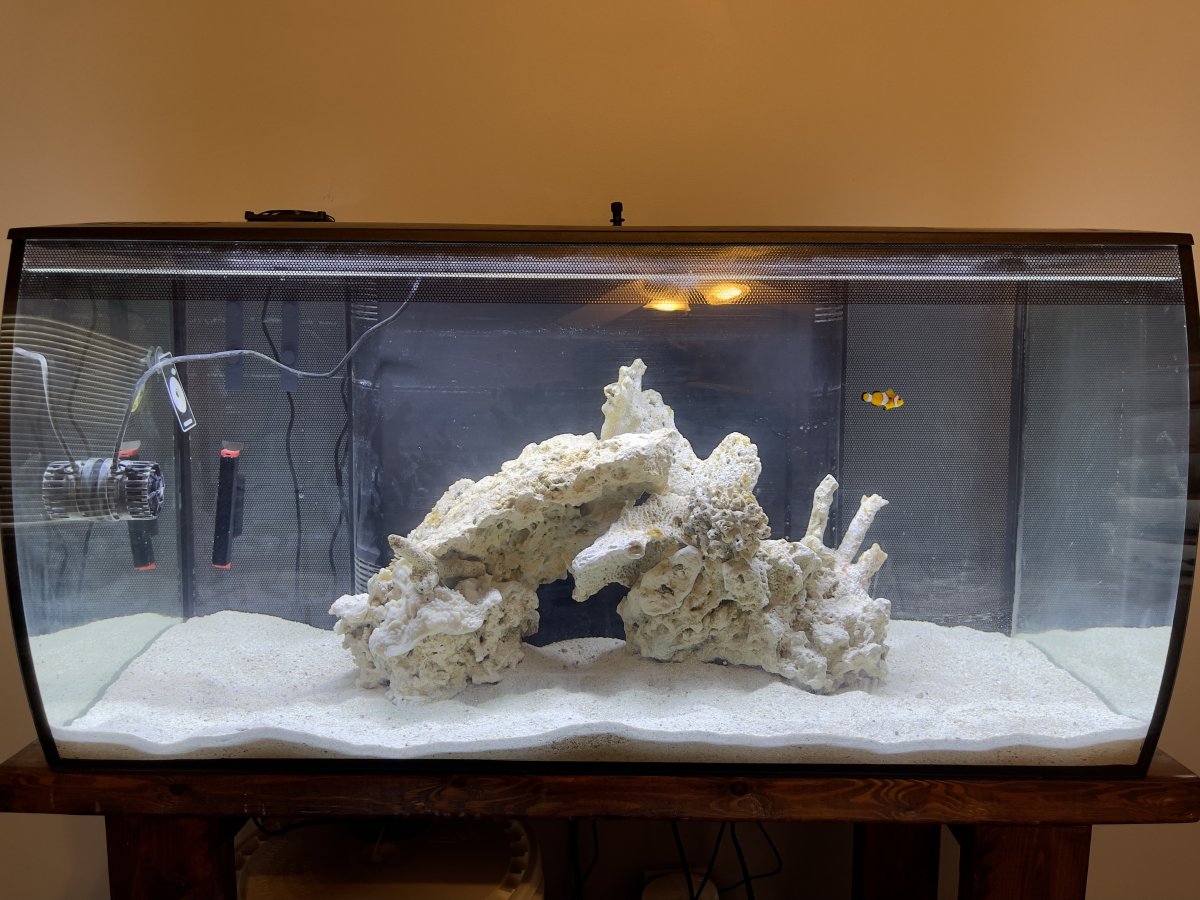 Thanks! Been a lot of obstacles already that I'm learning to overcome.

Great start BombadBrad! I was headed over to the Member Tanks section to start my own thread for my Fluval Flex when I saw yours. Really glad to see a few people with our tank on here to get some ideas and learn as they are newer with far less tips, tricks, and mods out there than something like he BioCube that’s been around forever. I’ll be following along for sure. Good luck!