Starting to plan my upgrade. Still lots of decisions to make and looking forward to the process and sharing along the way.

First decision is the location. I was leaning towards a peninsula against the wall in my home office/guitar room. You can see my current Red Sea Max 170E in the adjacent family room. The other option is to place the tank there. We will see. I think the family is leaning towards the family room which is great because they enjoy the reef. Works either way for me. I have guitars in there too..

Still going back and forth between the 170 gallon and 190 gallon Waterbox options.

So. Lots of decisions! I have started with building a new mixing station to eliminate bucket water changes. First thing first!

Stay tuned and thanks in advance for all the help! 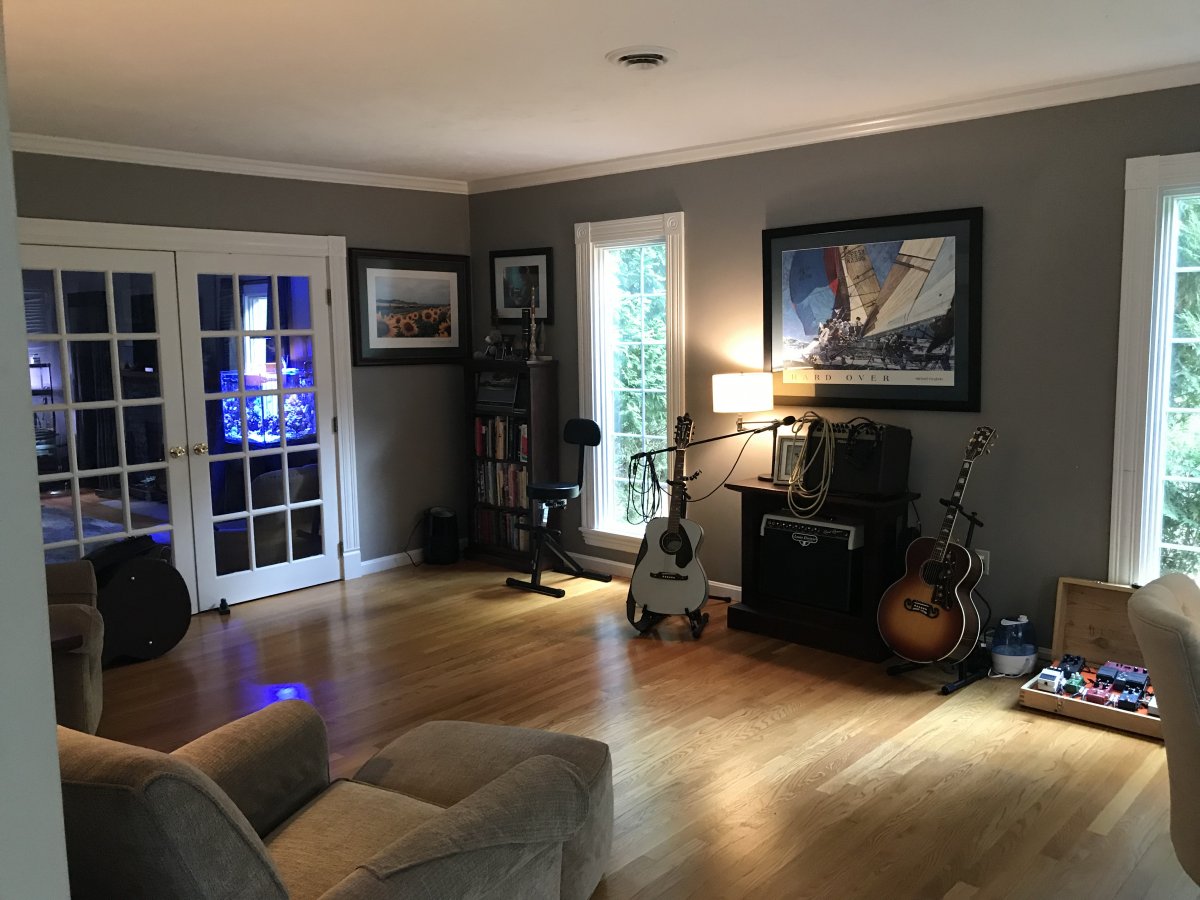 Nice start and interesting title! I can't wait for the background music on your upcoming videos!

Peace River said:
Nice start and interesting title! I can't wait for the background music on your upcoming videos!
Click to expand...

hanks. i guess I will have to add some!
OP

That is good to know. Any other specific reasons than length?

I like that the sump and ATO is a little bigger and it would give me a little more room to create a bigger island in the DT. I’m sure tank envy plays a big part. If I had the 190 I’m sure I would’ve wished I had gotten the 220. LOL. Overall I’m very happy that I went with a Waterbox.
OP

MW319 said:
I like that the sump and ATO is a little bigger and it would give me a little more room to create a bigger island in the DT. I’m sure tank envy plays a big part. If I had the 190 I’m sure I would’ve wished I had gotten the 220. LOL. Overall I’m very happy that I went with a Waterbox.
Click to expand...

Starting with my mixing station. This basement sink is in our winemaking area. We had a small vineyard of a few hundred vines when we lived in PA a few years back. We still make wine but don’t grow grapes. This weekend I started to plumb brutes and took apart and cleaned the pump in the photo which is food grade and will be used to pump water out and in one floor up for water changes.

This sink on the opposite far wall and one floor down from where the tank will be but there is no good way to drain on that side of the house come winter. I am likely to mix my salt water and roll over to the pumping station for the change. I need to drywall the ceilings in both areas as well. It is a bit of work but much less than toting buckets. I also like that I can rinse my brutes as often as I like. We will see. 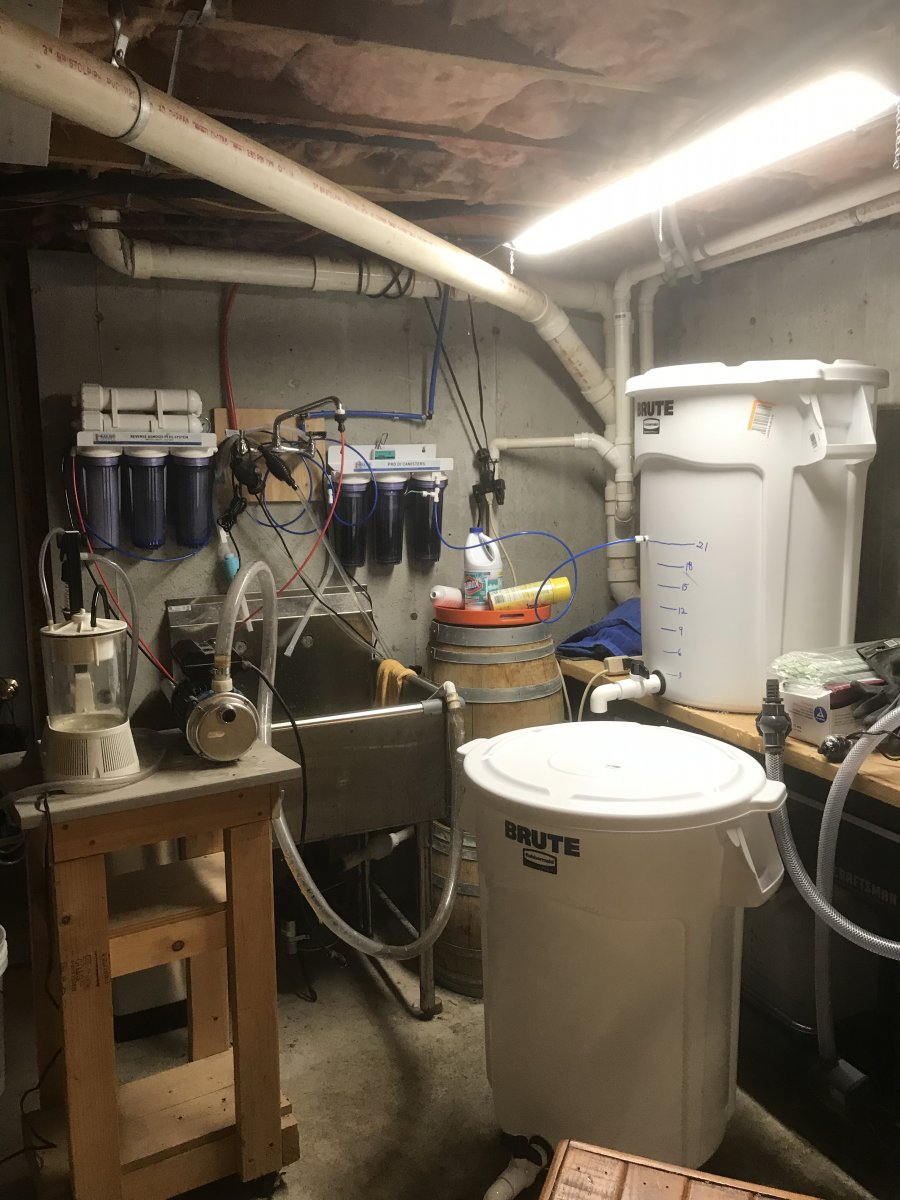 Things are coming along. Some pictures from the mixing station build are below. Had most of the wood lying around including some 4x4 cedar cutoffs from garden projects. This station is directly below where the tank will go. None the plumbing is glued or finalized. I am still messing with it because its kinda fun.

The table is covered with vinyl flooring. I enjoyed and was impressed with the latest @BRSTV video where Ryan showed all the water damage around the various surfaces around the BRS 160. Very helpful video!

This particular room also contains the furnace and hot water heater so the water will be stored almost warm enough for use with short notice. 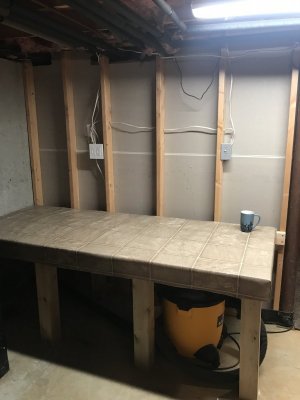 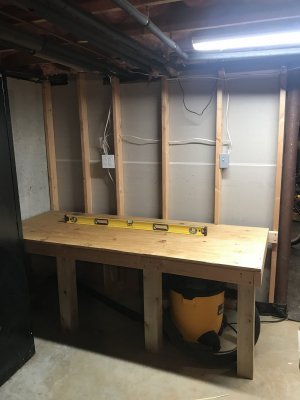 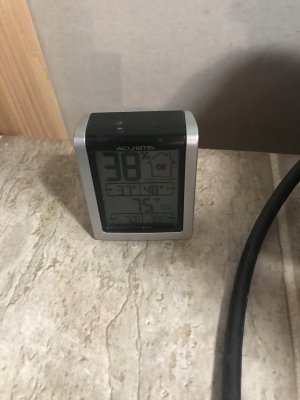 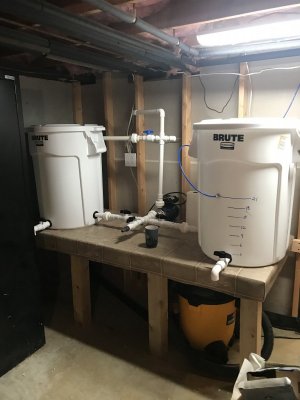 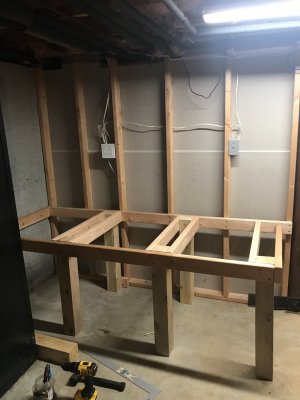 Despite brief reconsideration of my plans, I am excited to have purchased a new Waterbox 5526 Peninsula this weekend! They must have a new design on the way as they had them on clearance at 20% off. Done and done.

I am not sure if I will use the stand or whether I will build custom. I am leaning towards building custom and using their stand as shop furniture in the workshop.

I also ordered an assortment of Marco rocks dry rock from @BRS this week as well and am excited to start designing my aquascape. Oh yeah, and I had some surgery this week which may explain much of this burst of productivity.

Rocks arrived and had a great time playing with aquascapes. Nothing permanent was decided. i was really just ensuring myself that I had purchased enough rock. I think it is plenty, especially as the live rock from my RS 170 Max-E will all be moved over as well.

Going to start the bleach cure today and let it go a week before rinsing and starting the normal cure. Cheers! 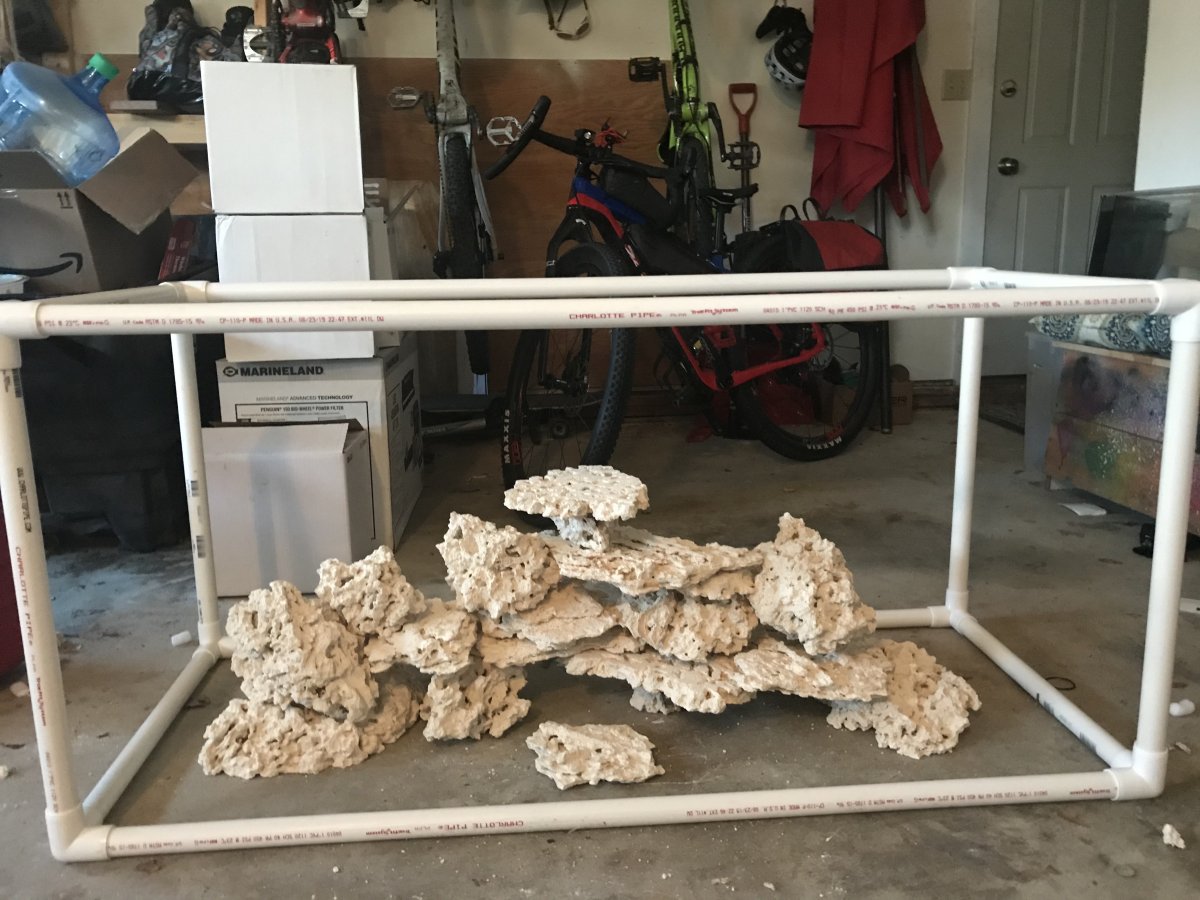 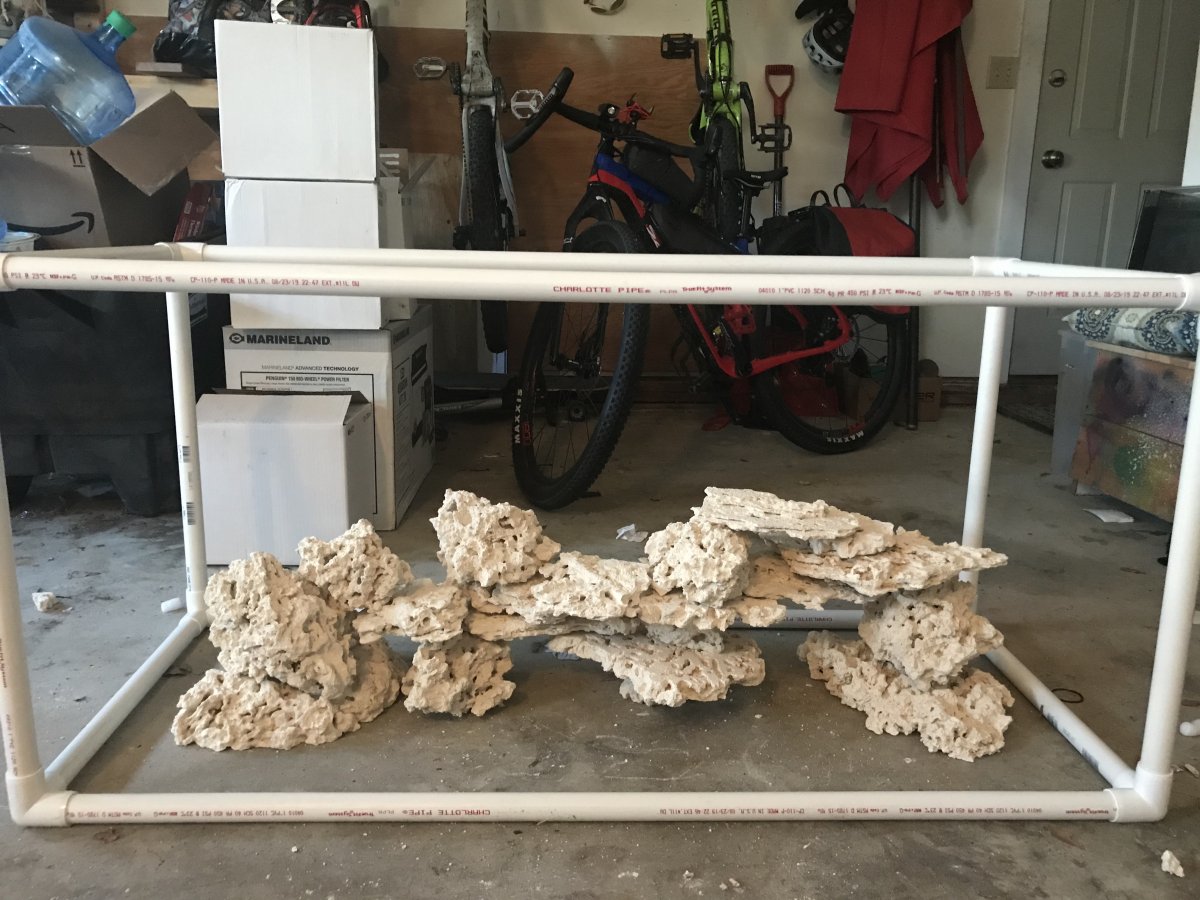 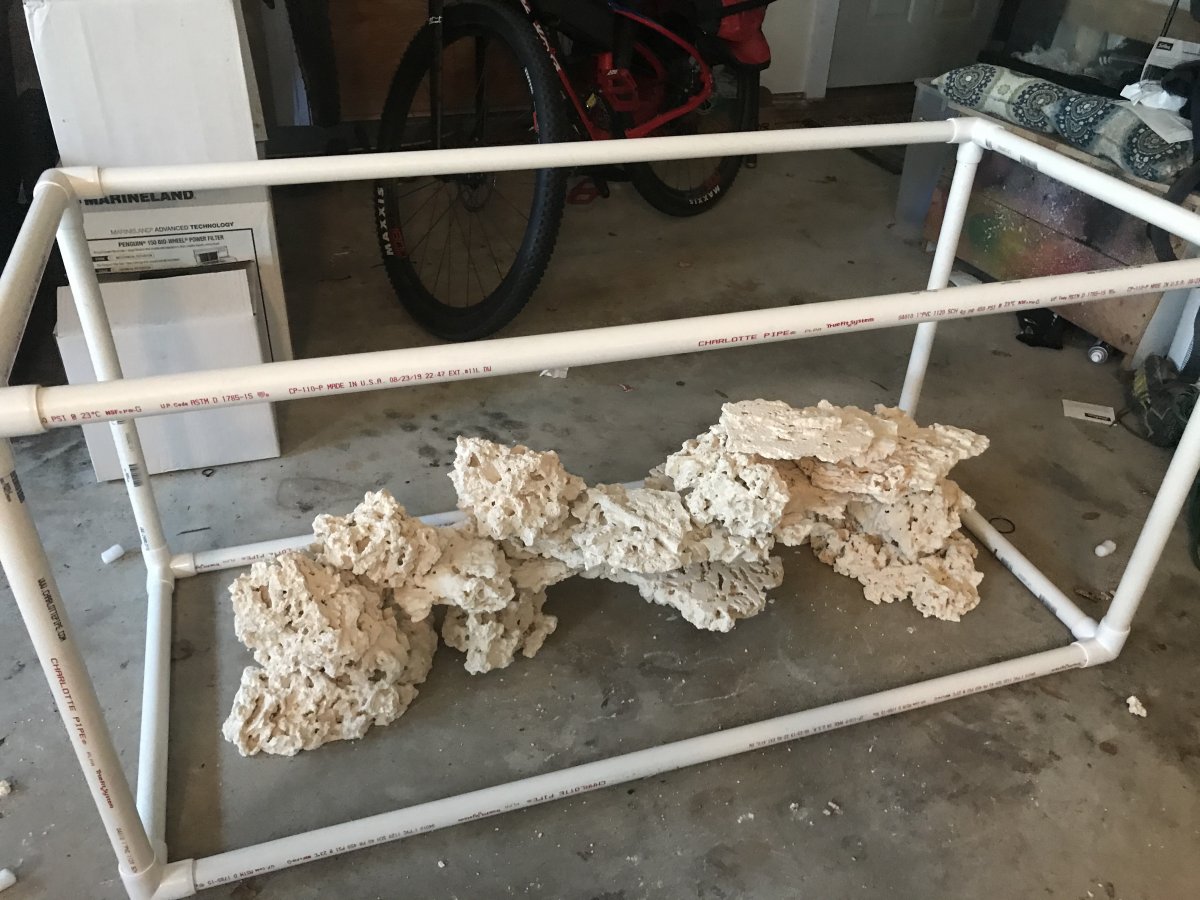 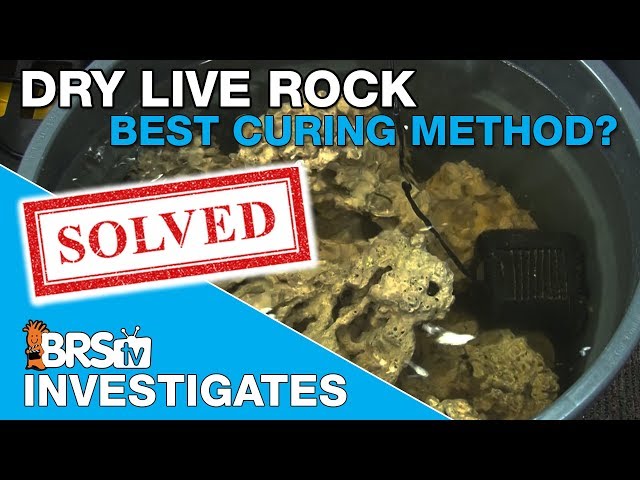 BRStv Investigates: What is the best way to cure dry live rock?

Today on BRStv, we have a brand new episode of our series, BRStv Investigates. In this series, we explore popular reefing theories, products, methods, and what the manuals are missing, with a focus on putting them to the test! There are many different methods for curing rock out in the reefing...

Tank arrived!! Woohoo! I have also decided to custom build the stand and to plumb the sump down in the basement so this will be an unconventional Waterbox for sure. Stay tuned! 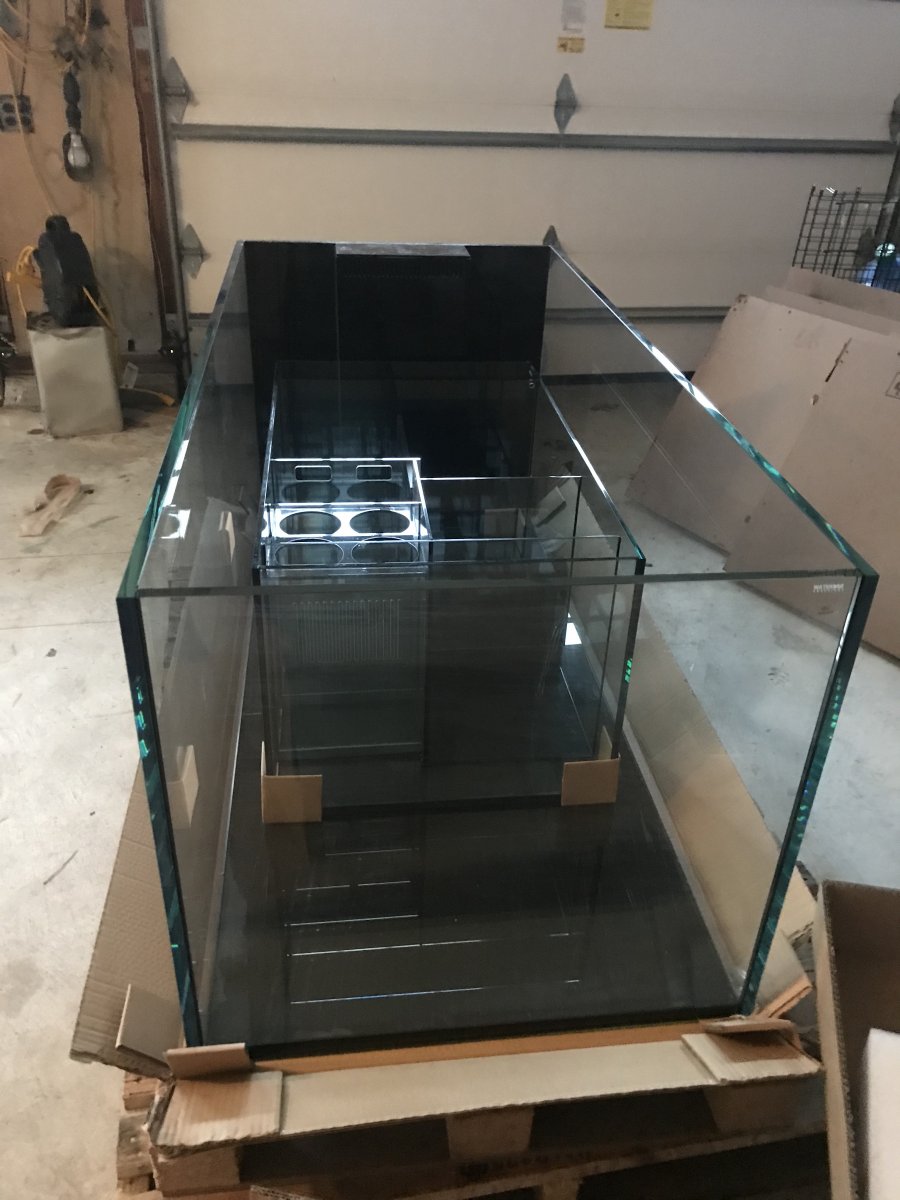 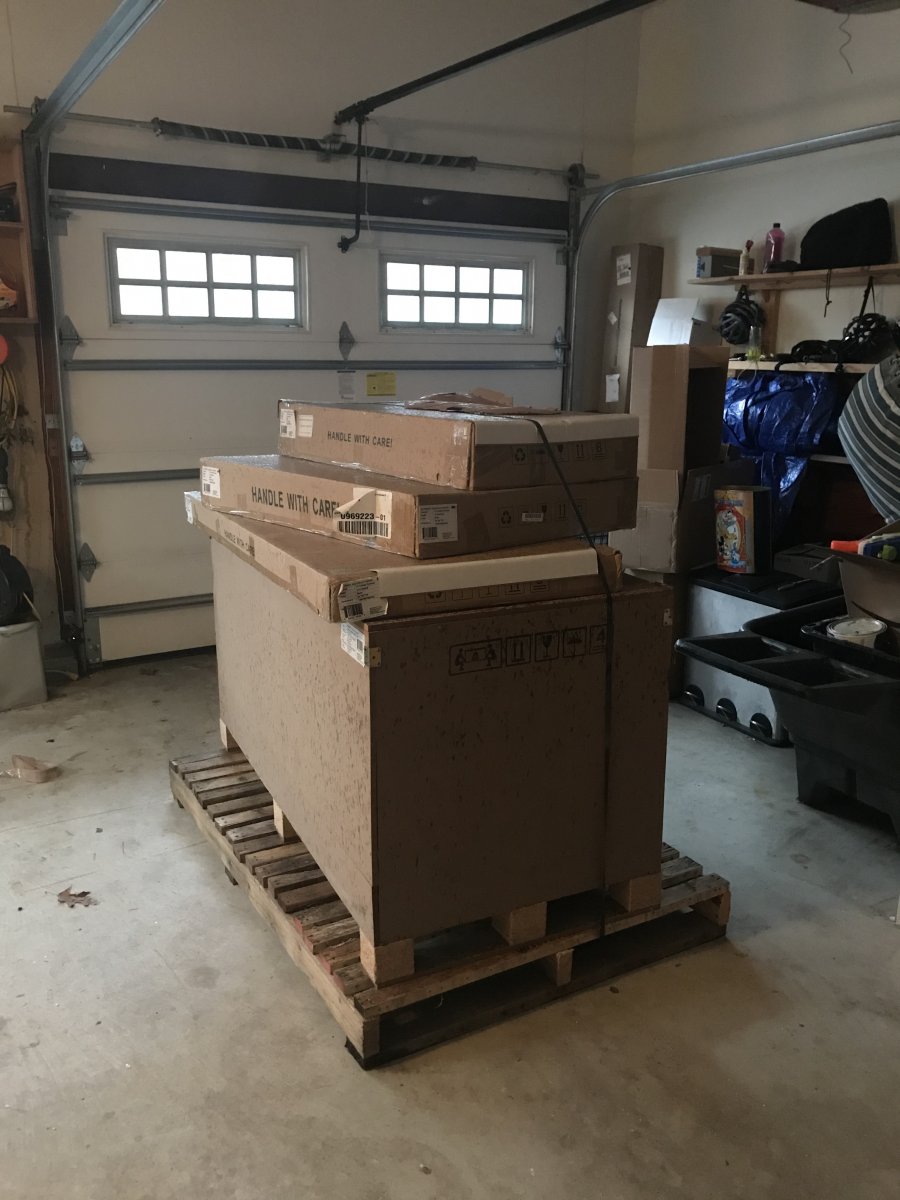 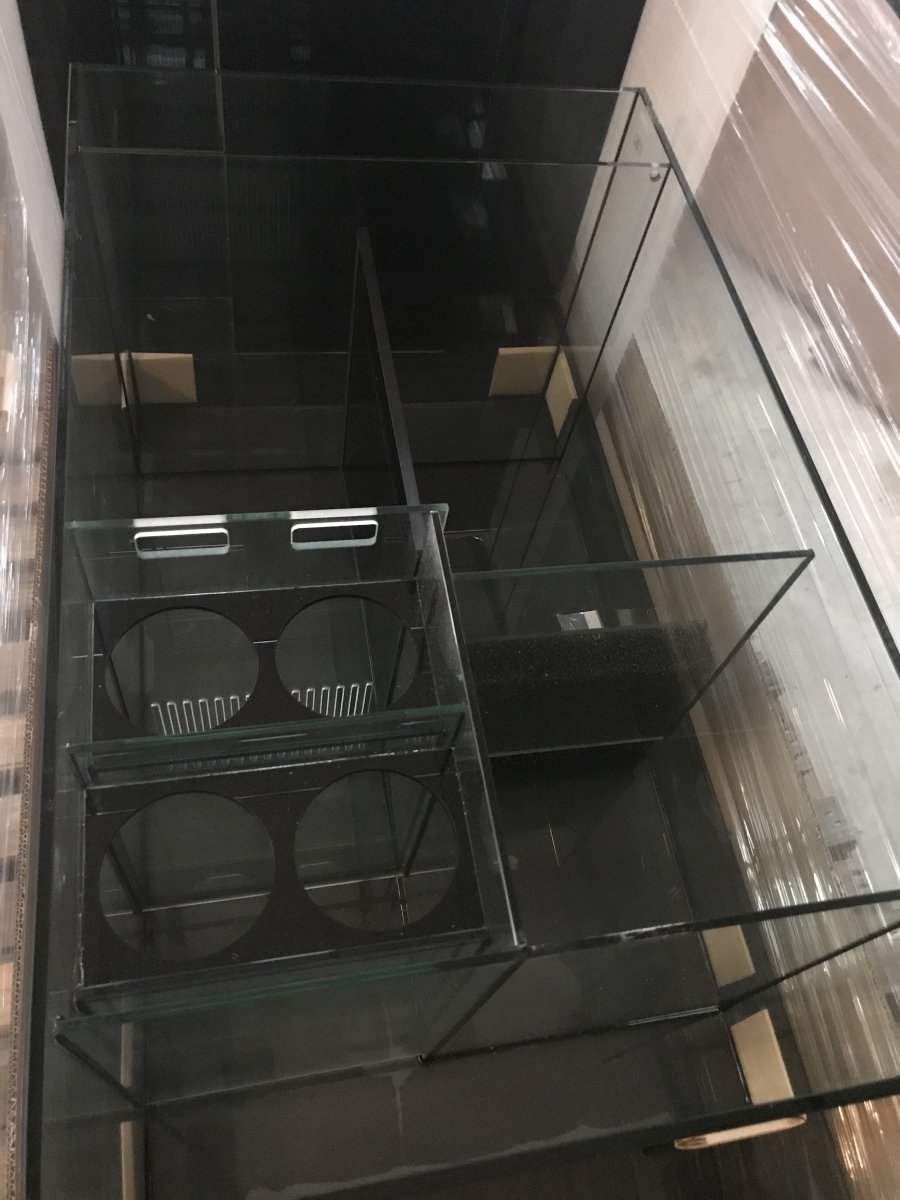 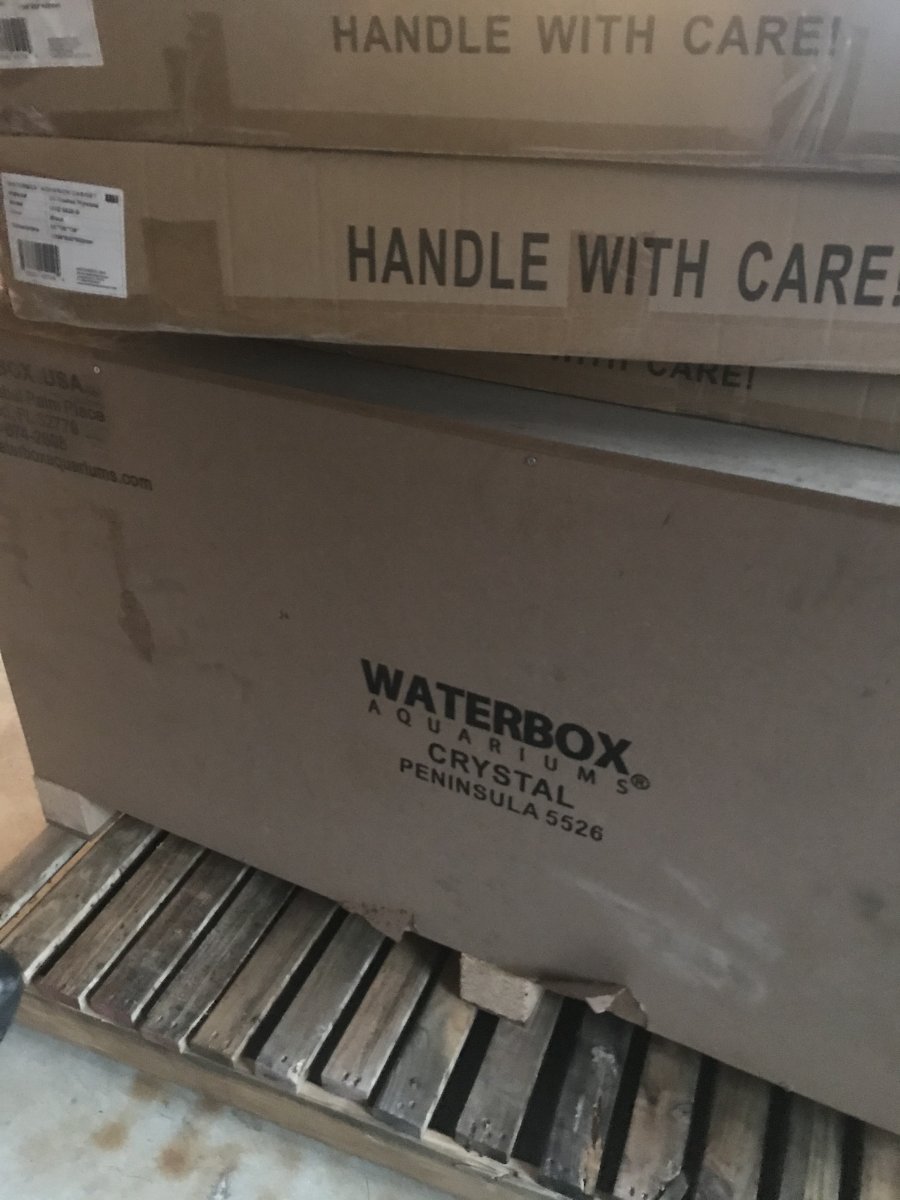 Built the stand today and am VERY glad I decided to build my own dIsplay stand.

The Waterbox stand arrived in good shape. It was very well packaged. The manual gave little information but the stand assembly video was easy to follow.

The problem is with sub-standard components. The IKEA style locks were brittle. At least 4 or 5 of them snapped when locking them into place by hand with a screwdriver. The real issue though is one of the doors tore out of the casing the first time I closed it. You can see from the pictures below that the anchors for the door hinges are just plastic glued into holes in the plywood. It looks like the glue was faulty or missing as, when I closed the door, the hinges just peeled right out of the car as of the cabinet.

As I am using the case in the basement fish room, I just used slightly longer screws to attach the door. I contacted Waterbox support and they were friendly but did not seem surprised. They offered to send replacement parts which, in this case, would be the entire rear of the case and require almost complete disassembly. I am inclined not to bother as I am concerned other things would break in the process.

Again, I am very glad I am not resting 130 gallon tank on that stand. I am sure others are fine but definitely suggest buyers be very careful with these.... 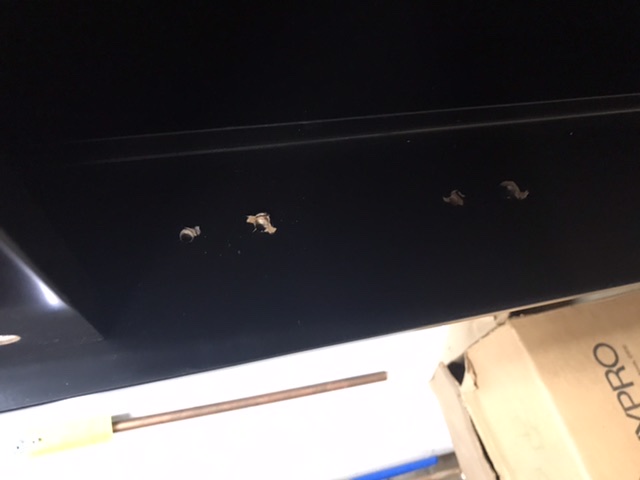 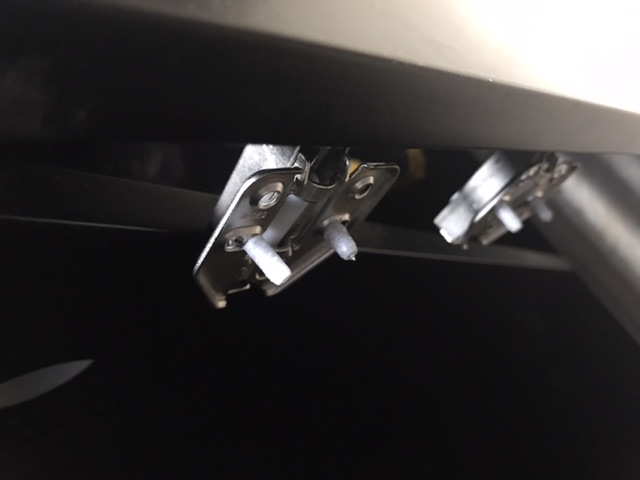 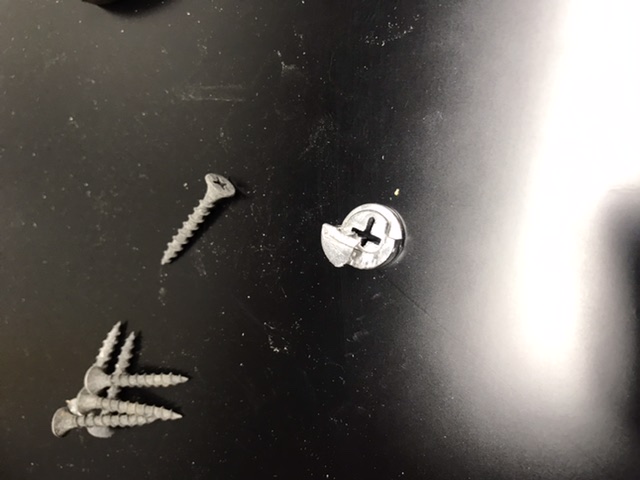 Thought it was time to share progress on my upgrade to a Waterbox 5226 build.

The primary modifications were to plumb the sump to the basement and build a custom stand. The latter proved a great move as the stand came damaged with damaged doors and glue joints and Waterbox support just wasn’t interested in fixing in properly. (See thread above)

No problem though as the Waterbox cabinet is in the basement serving as the base for the sump.

plumbing was complicated by the metric stuff from Waterbox but manageable.

For the stand. Over the holidays i had fun with the joinery as shown in the inset pictures. Went with LED lighting and glass shelves. The case is empty due to the basement sump but will soon be insulated, lit and will hold my single malt collection. The stand is 4x4 and 2x6 clad in maple and oak.

The bar is a solid piece of oak. We already had the wine barrel barstools

Tank has been running two months. The lights, dosers and volumes of invaluable advice are from the wise and generous Dong @ Acro Garden.

Sump is setup stock. I added a hood, because its in the basement, and it sits right next to my mixing station.

More to come as things evolve. 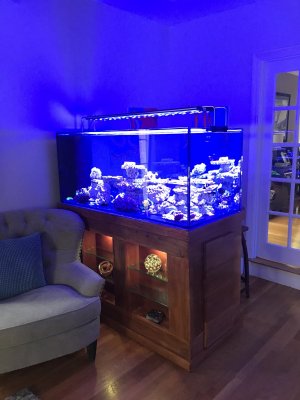 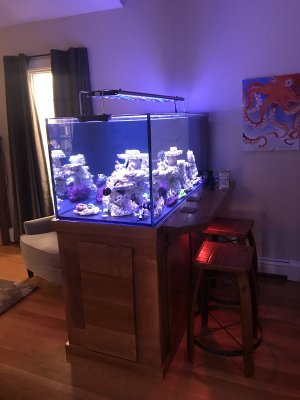 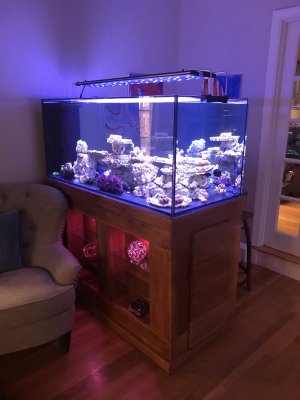 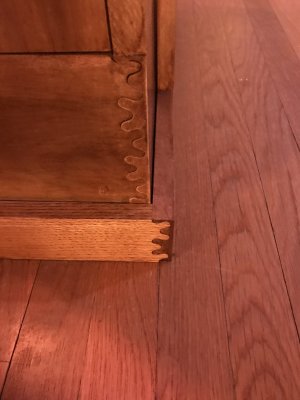 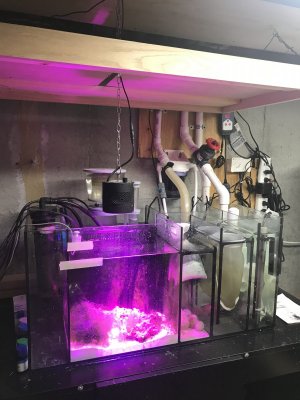