I am just going to run a loop in the sump

Still waiting on new UV pump. I notice today that I have a major pod population. I was thinking just a week ago that they had all died but no. They are covering the back glass. Thousands. Time for a mandarin?
I recently added this Leopard Wrasse. Such a beautiful fish. I got lucky as this was from someone else’s tank. Probably 3” long, very healthy and eats everything. Supposed to be an expert only fish but so far so good. 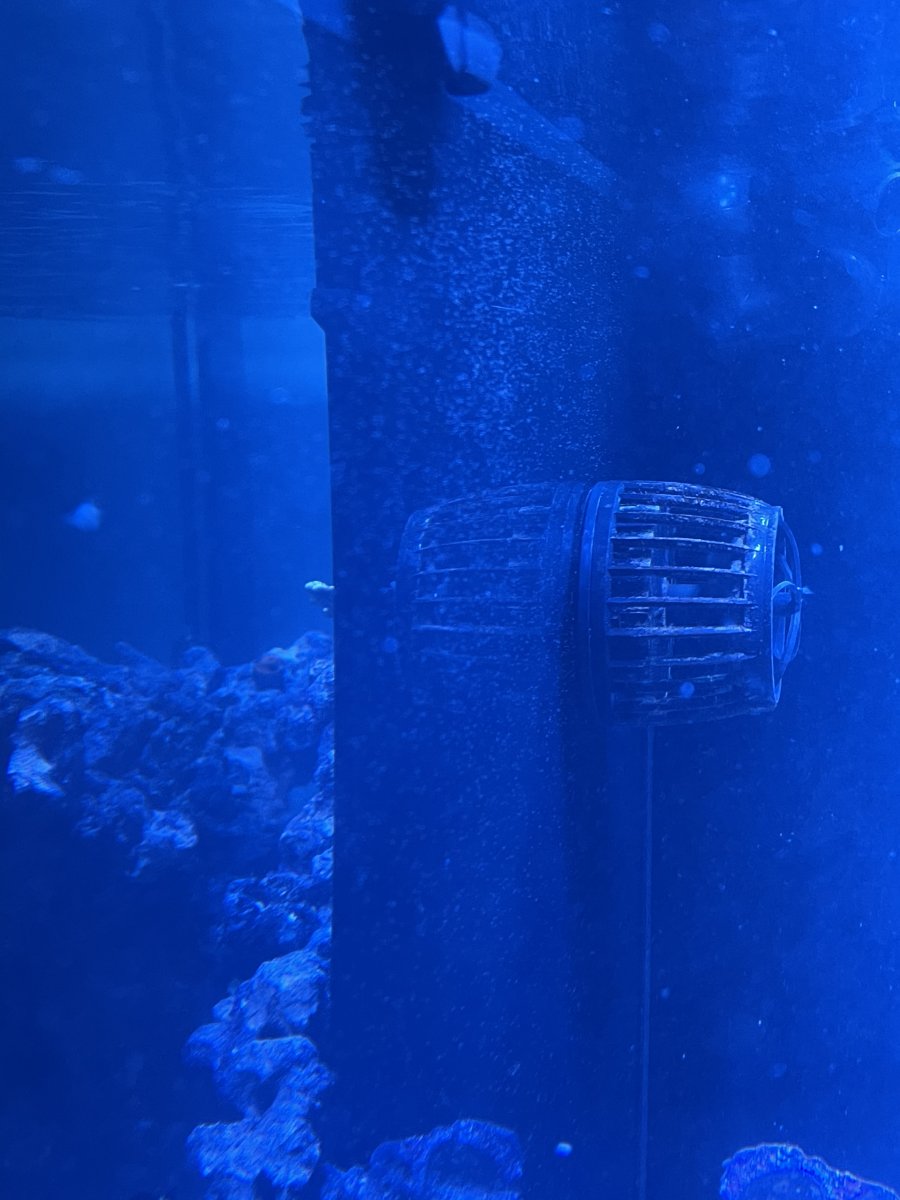 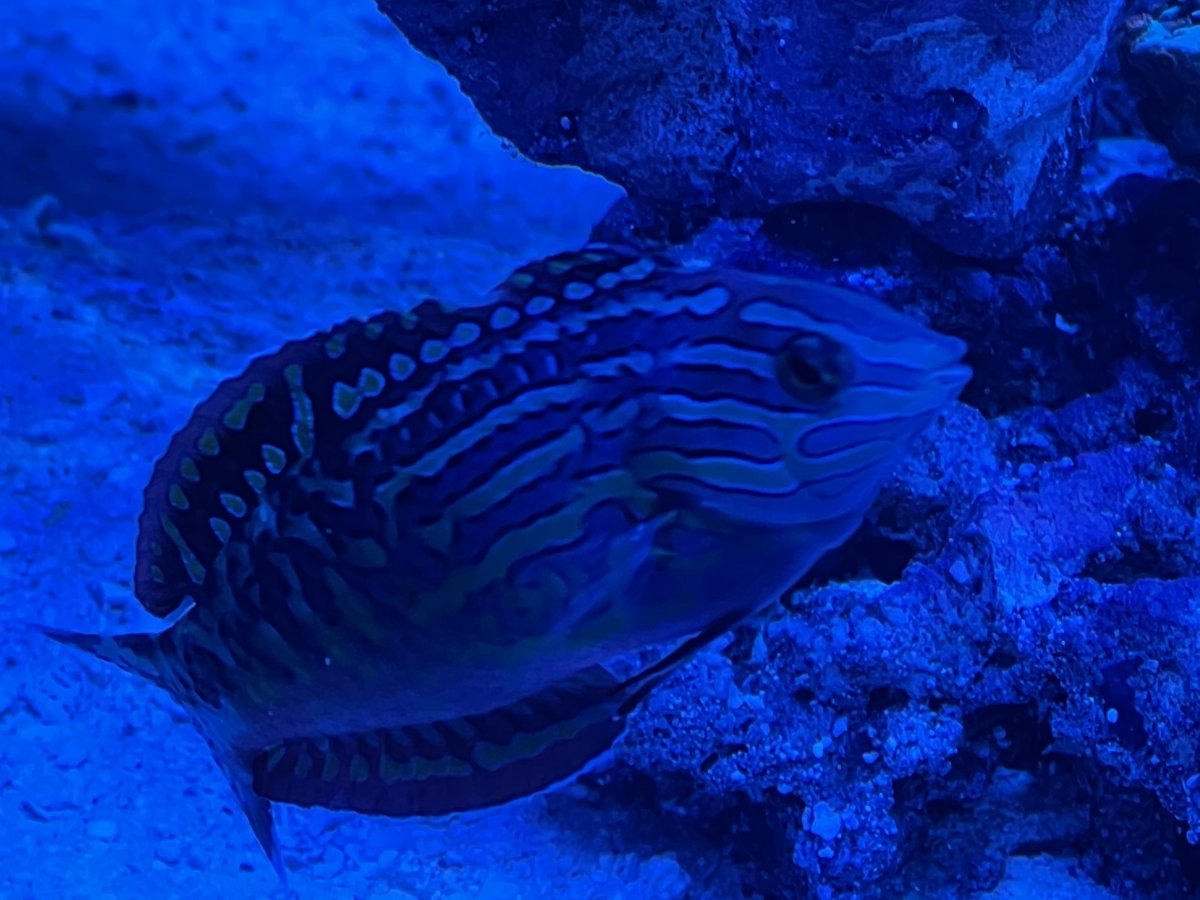 Received the new pump today for my UV. What an amazing little pump! I almost went with a COR-15 which would have been overkill and ended up going with a Platinum Blue 800. https://sevenports.com/platinum-blue-series-pumps/

This pump is literally silent. You can’t even tell it’s on its remarkable. It’s DC so completely controllable and very easy. These would work well for a return pump but I’m happy with my COR-20 return pumps. I have the pump running at about 450GPH which gets me close to 2x tank turnover per hour.

which reminds me... if you are looking for a UV sterilizer you should visit this website https://www.americanaquariumproducts.com/AquariumUVSterilization.html the owner of this place knows a lot about UV. He helped me determine what I needed and he really likes TMC UV sterilizers. As described above I went with two 25 watt units installed in line and in a closed loop taking directly from my display and going back to my display. It was a bit of a pain since I was installing in a small area in a cabinet in another room behind my tank. If I had it to do over again I would have plumbed it before setting up the tank. But it’s in and everything is clean and no leaks. Yet....

Also a new addition Scopas Tang. Within about 15 minutes he and my mimic tang became great friends and follow each other around. 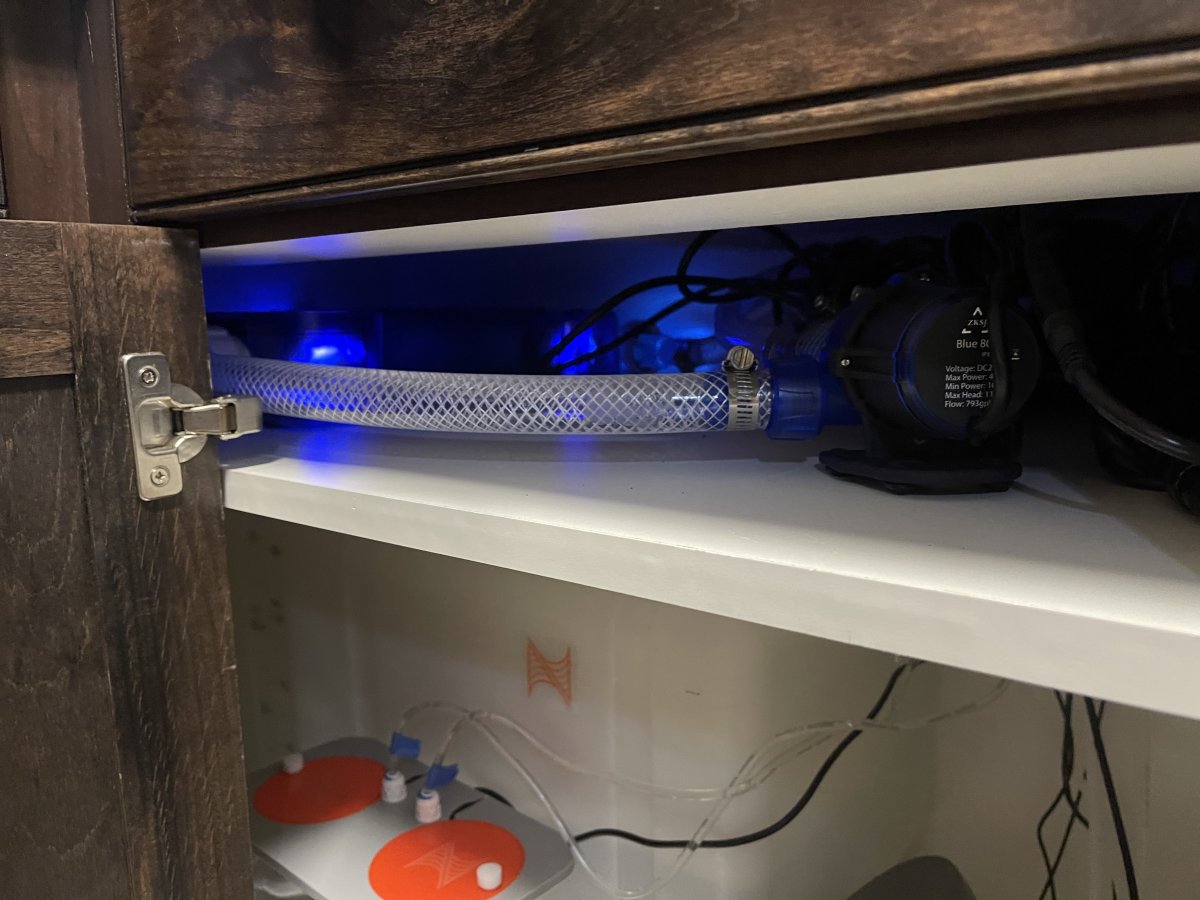 Little update. I’ve been a little unhappy with my PH. It was dropping down to around 7.75 so I started to look into a CO2 scrubber or dosing Kalk. Before going that route I decided to try to run an air line outside to my skimmer. Drilled yet another hole through the wall into the cabinet behind my tank. Then down through the floor into the crawl space and out a foundation vent. Almost instantly my PH started to go up and is now sitting at 8.13. Much better. Attached are my apex water parameters. My nitrate is at 5 and my Phosphate is at .06.

have added a few more coral frags and fish. Added a Citron clown goby which I may regret. He seems to like to sit on my SPS. 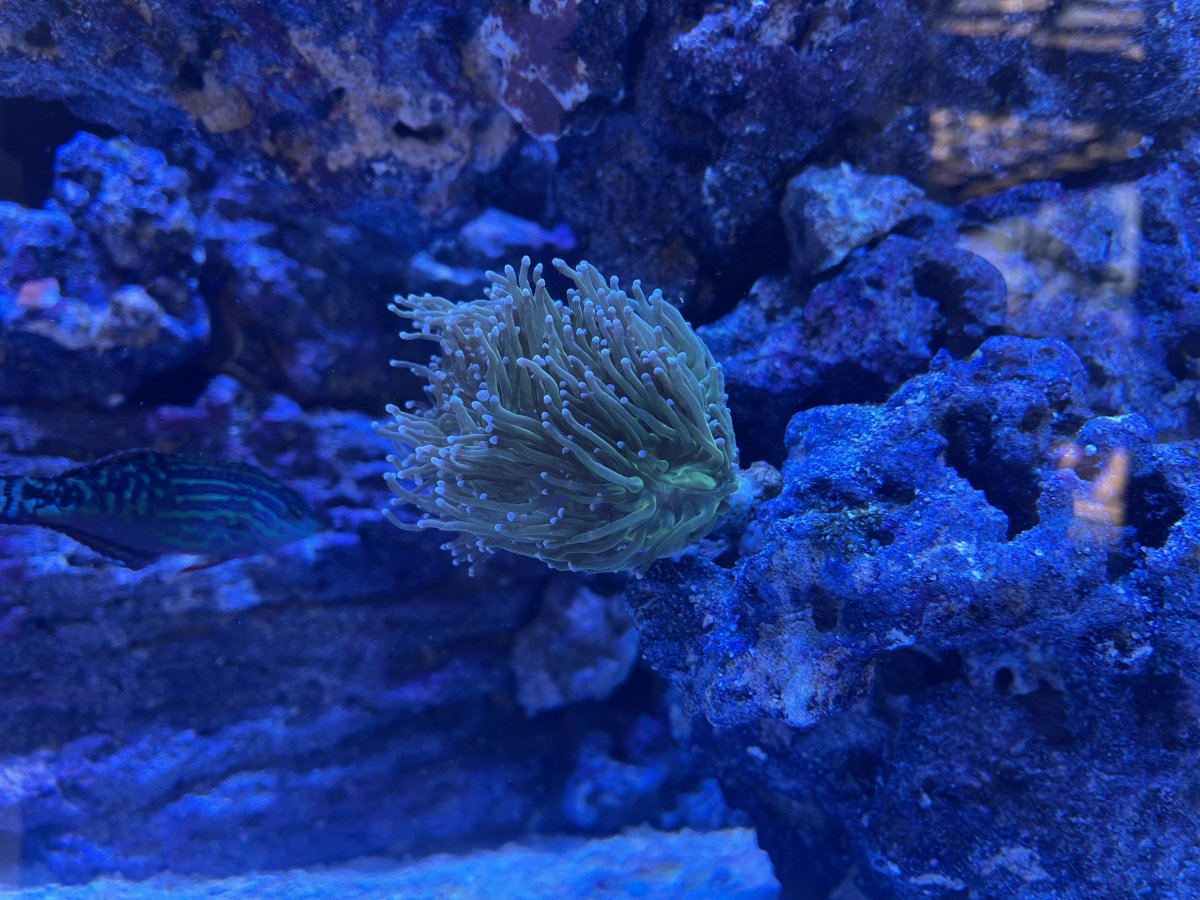 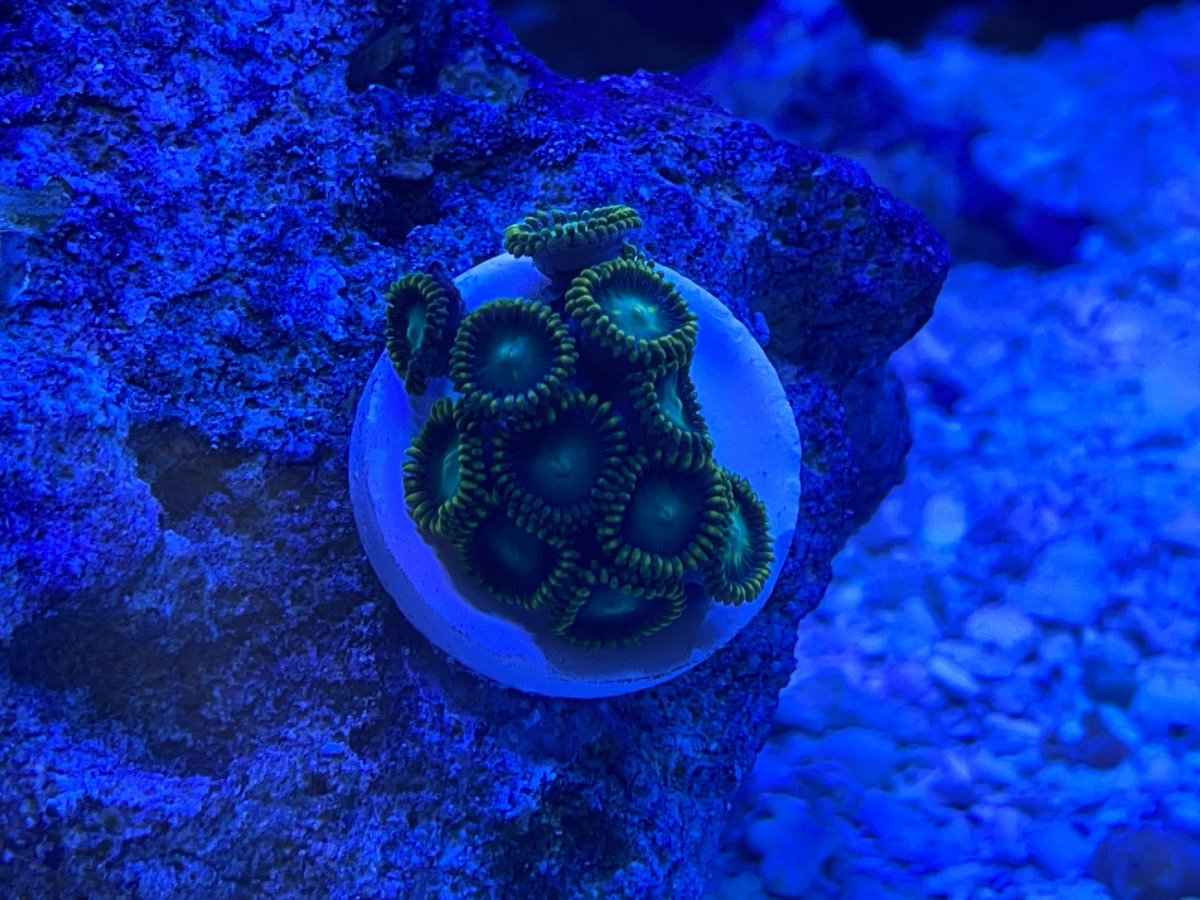 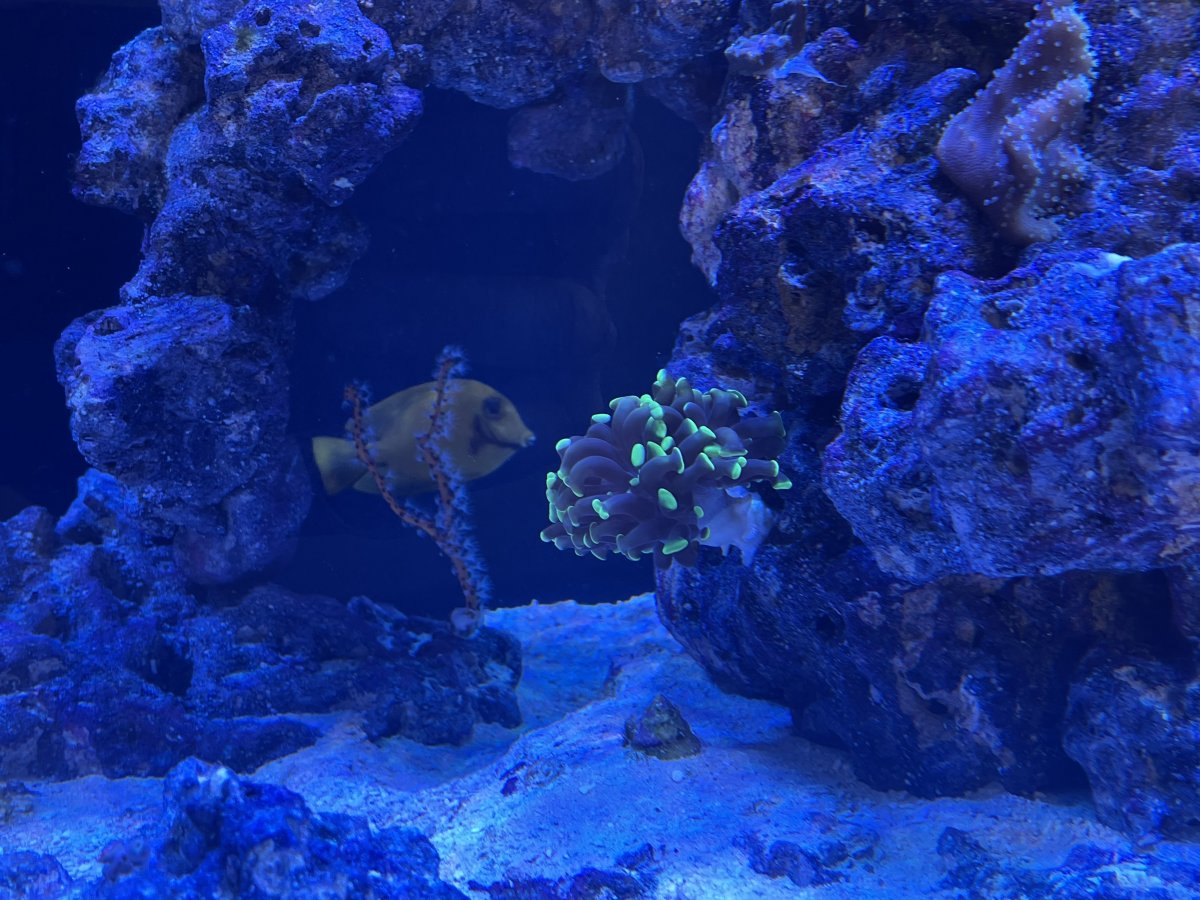 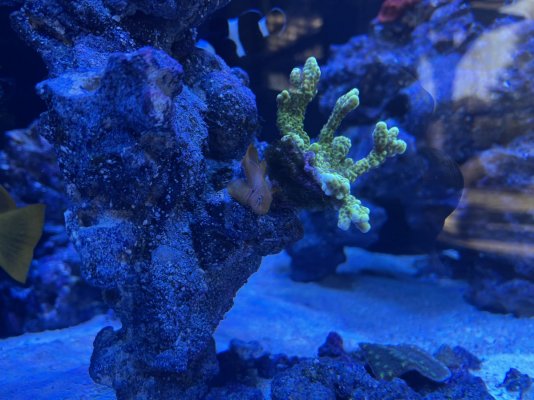 So end of the year update.
Clown Goby is gone. He was sitting on and was nipping on a couple Acro frags. He also appears to have took a bite out of a branching Monti. I saw him sitting on it several times and now I have a small white spot..

Unfortunately my Midas Blenny disappeared. Im guessing he died which is odd as he was always a big eater.

My PH has been stable and ranges from about 8.21 to 8.12 - much better than where I was just from using an outside air line. My ORP which I understand isn't something to watch closely really has some big ranges... It will go from 275 to almost 400 a couple times a day. I think it coincides with my Auto Water changes but not sure. Any thoughts?

I finally have spots of Coraline algae all over the tank which is a welcomed site.

Unfortunately I also have patches of hair algae (assuming its hair algae) growing on the rocks and sand bed. I know its normal for a newer tank but a little unsightly. I only have maybe 6-8 snails which isn't many for a 200 gallon tank so Ive bought 20 more various snails a conch and an urchin. Also a dozen more frags from Aquarium depot.

The Monti with a white patch which I assume is a bite from the Goby. 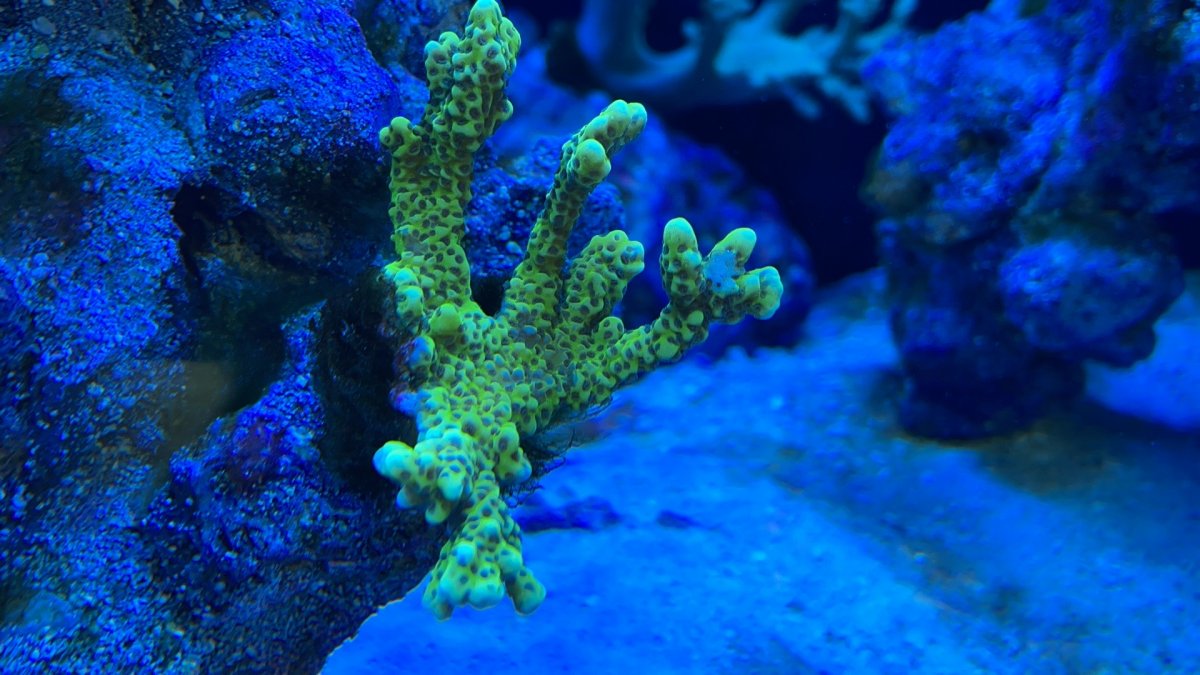 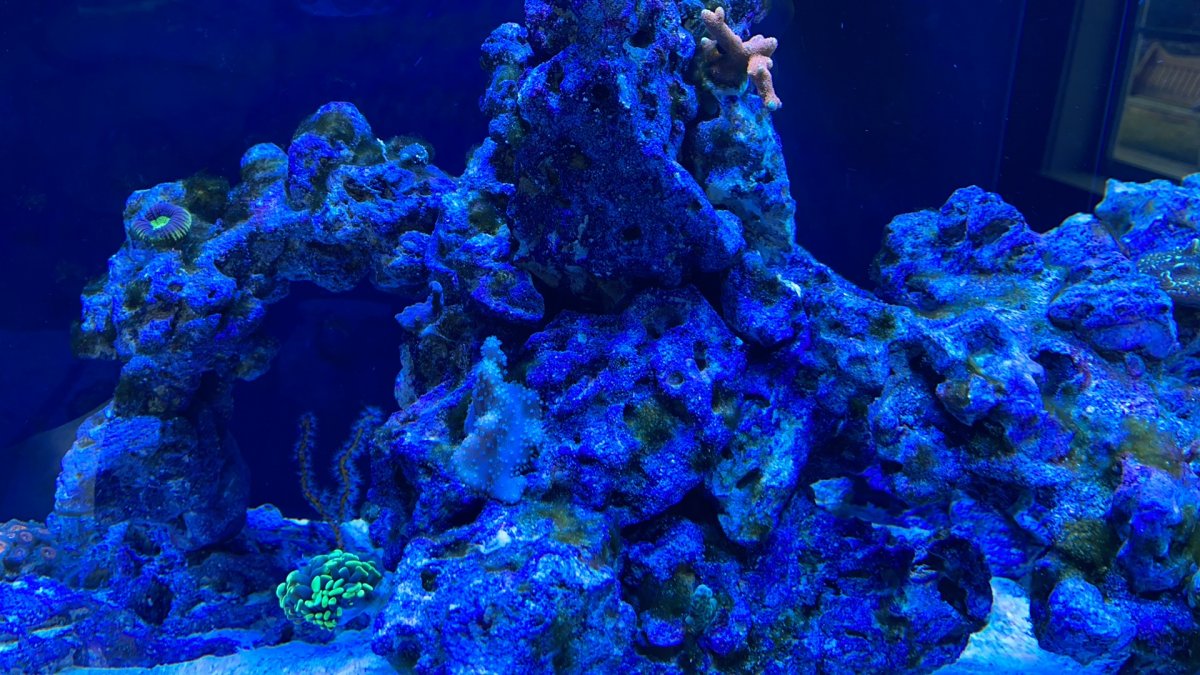 A Hammer I bought a couple weeks ago with what I think are new heads forming? There are several small branches around the base and it appears that there is a speck of color on the ends... hopefully they are new heads - there are about 7 of them. Thoughts? 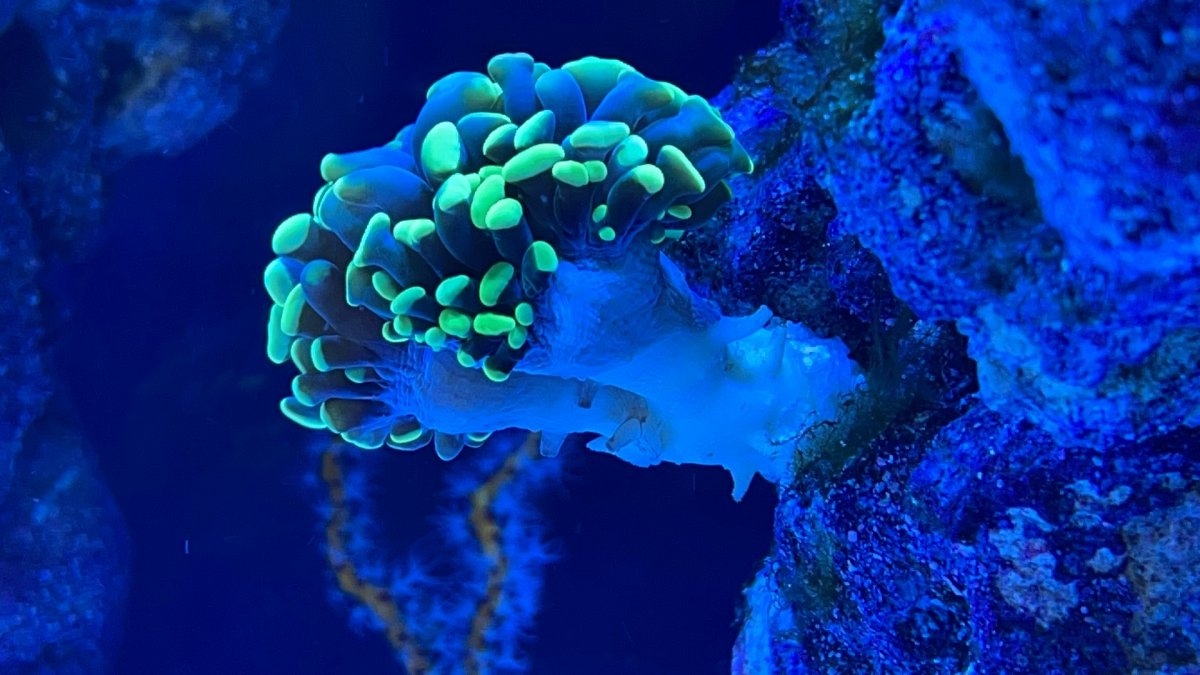 Been a couple weeks since last update. Things are going well. Algae patches are mostly gone, now just have a bit of red cyanobacteria. Working at keeping it in control and so far its just patches in a few areas with lower flow.

I am up to around 50 frags now (counting zoanthid frags). Seeing growth on the SPS albeit a small amount but then its only been a few weeks for many of the corals in the tank.

Have started dosing Alk daily. Ive managed to keep Alk up around 8.25 which is about where I want it but as soon as I started dosing my calcium has gone up and stays around 460 now. Not dosing any ca - just 3 gallon water changes per day I guess keeps it up. 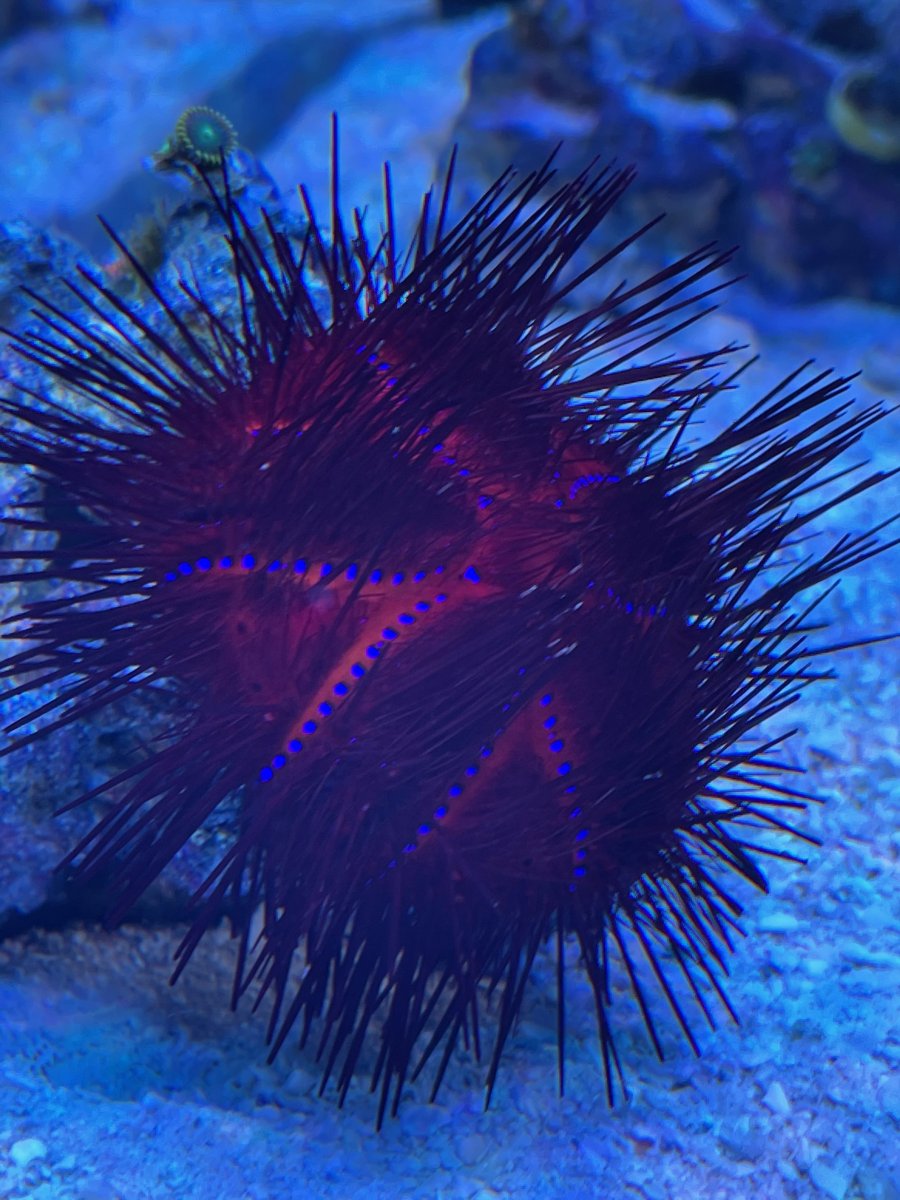 One of three future zoanthid gardens. Still really early obviously. A few frags started out as single polyps so there is at least some progress. 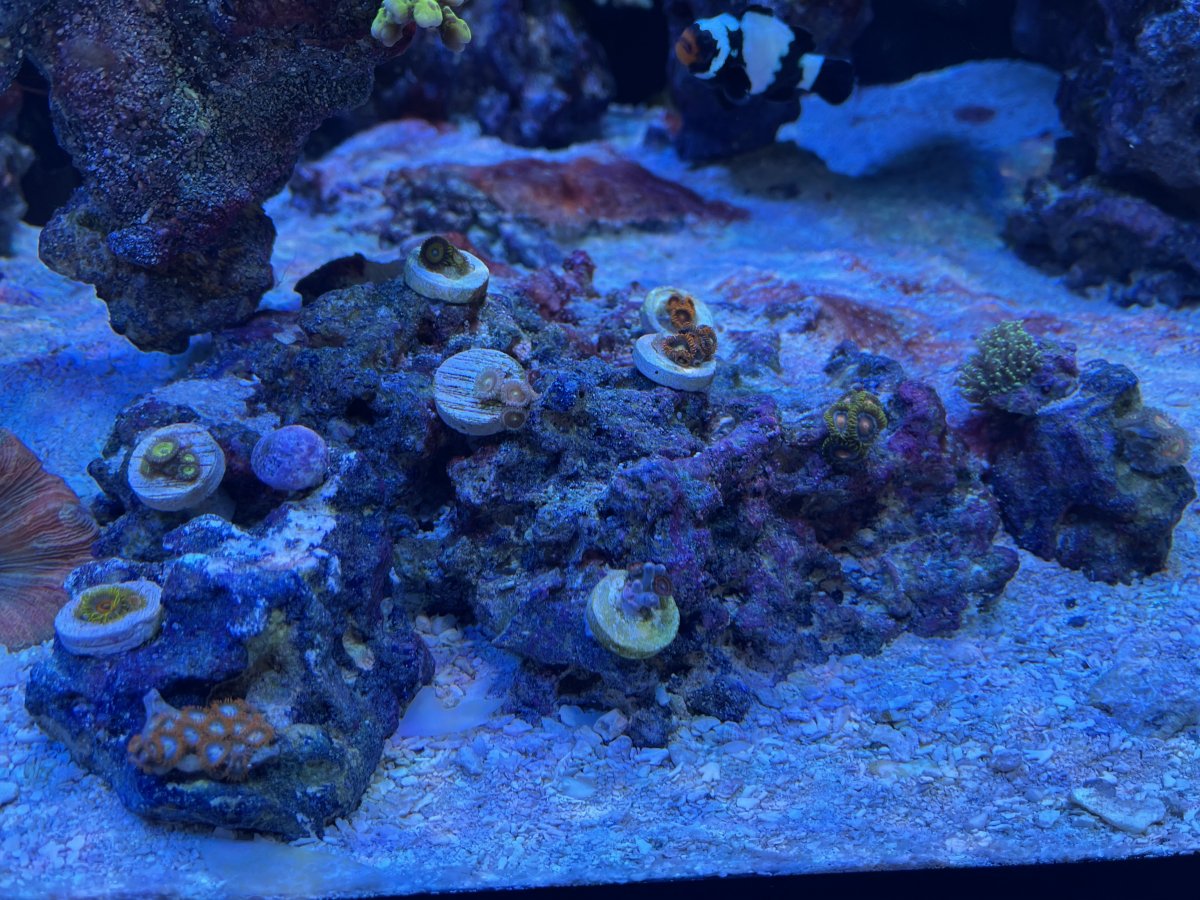 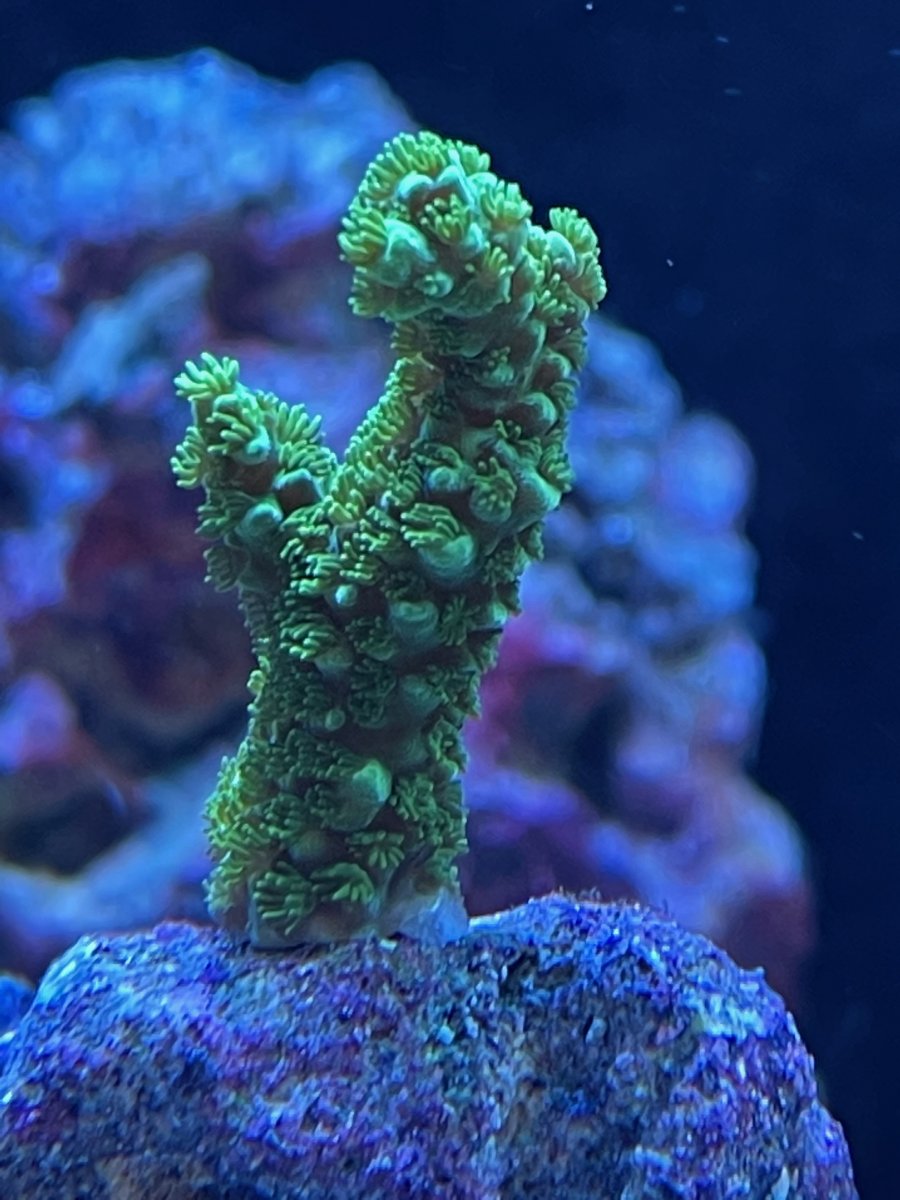