Rating - 0%
0   0   0
I've been itching to get this thread posted, tank finally came in today so figured time to get it started. Finally joining the ranks \o/ lol
So, a little bit about my start... I originally bought a used IM 20g peninsula locally about 2 months ago, came with an A80 kessil which I sold, and a cobalt 150w neo-therm thermometer. Got some of that purple caribsea rock from a few places around me and one of the older model stands from IM thru their ebay store. Watched all of the Marine Depot->BRS 52 week beginners guide to saltwater aquariums videos, a few times and couldn't decide how I wanted to do my aquascaping (trying out this NSA type stuff or just sticking to piling it up and just going with that). I decided to try and break up the rock and make something more of it than just piling up the 'shapes' that I had. Well I quickly realized this type of rock isn't exactly the best rock to be trying to break up, and I ended up with just more boulder type rocks just smaller, and now they weren't all purple all over anymore. So I did what any rational person would do.... I went and bought a new bigger tank. Got a hold of some marco type rock (not sure if its actually marco rock, but its close enough) from some locals that were getting out of the hobby and have it sitting in some bleach for a few more days. Then I can start this aquascaping nightmare again

For my equipment, I am still up in the air for most things. I have the tank and stand of course, I plan on going with the butcher block and casters hack that I have seen others with this tank do. Have been debating on whether or not I would want to get into any type of controller, but even if I do it would be something later on after I get the hang of dealing with things myself and not depending solely on the tank being totally automated. On lighting I been leaning towards a Kessil AP9X (might be a bit over doing it with this as from the coral I have been interested in so far have been mostly lps/softies but don't want to have to upgrade if I have a change of heart sooner than later), but still open to suggestions. For heating and filtration I plan on going with a helios with dual heating elements, and upgrading media caddys with InTank media/fuge caddys. But before all of this, first things first... ATO. Thats as far as my planning has gone... I know I'll need to get some flow in here but I haven't really done any homework in regards to flow just yet.

To top this all off I just realized that my current lease runs until the end of July and not sure if I plan on staying in this place or not... so until that is settled I wont be putting water in this thing. I would sign a new lease just so I can get my cycle started lol but the way things have been going in this economy, if they are going to raise the rent I'll most likely be heading elsewhere. What's that thing we keep getting told in this hobby... patience? 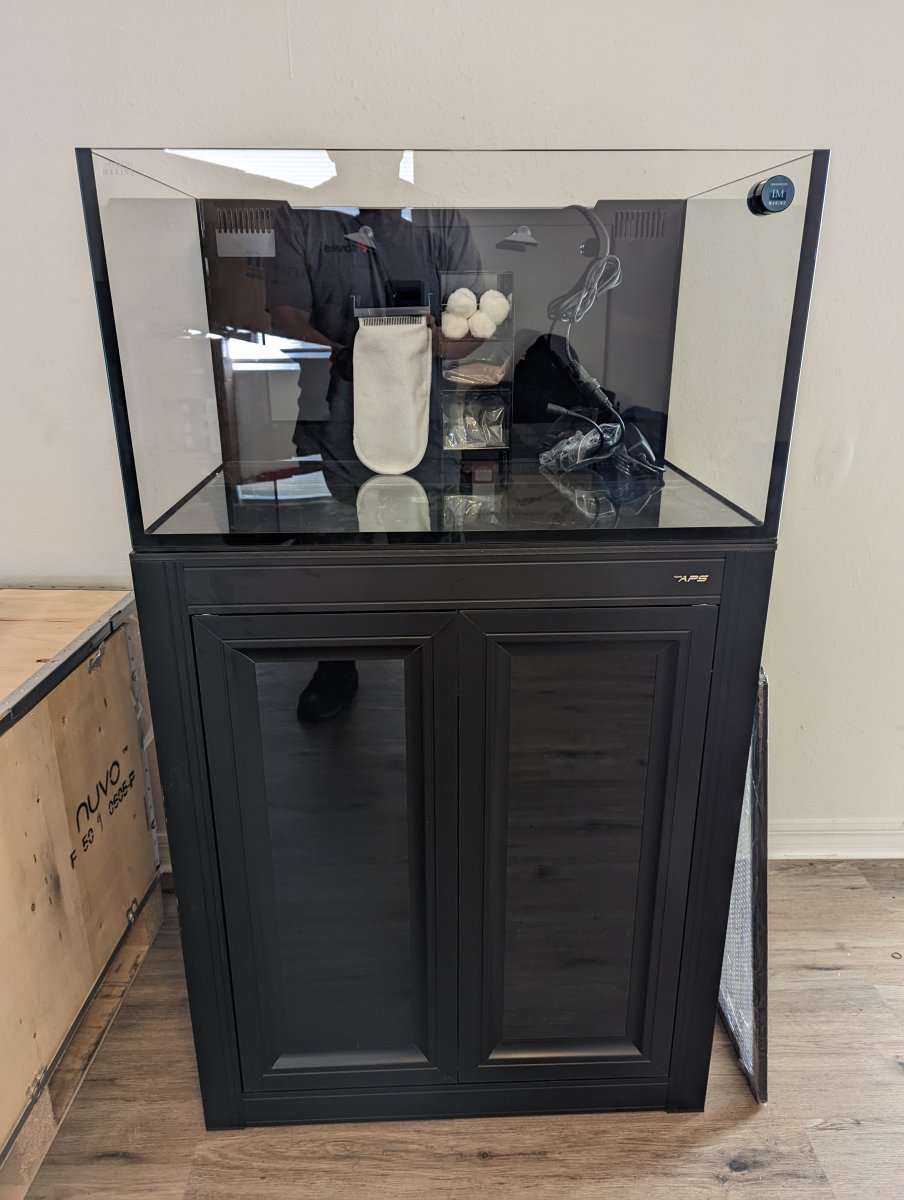 Rating - 0%
0   0   0
So I finally got the rock scaping done, to be it looks ok... Not what I had imagined in my head but then again I'm not even sure what I had imagined, I was just tired of having it all just sitting there lol. We are still in the fence if whether we are moving or not so holding off on doing much else right now.

MaD_ReefeR said:
So I finally got the rock scaping done, to be it looks ok... Not what I had imagined in my head but then again I'm not even sure what I had imagined, I was just tired of having it all just sitting there lol. We are still in the fence if whether we are moving or not so holding off on doing much else right now.
Click to expand...

I like the layout, i think it looks goods, I have notice i had to pick up a few extra socks, as mine are getting clogged and have to change them out every few days.
OP

Mr.OK said:
I like the layout, i think it looks goods, I have notice i had to pick up a few extra socks, as mine are getting clogged and have to change them out every few days.
Click to expand...

I don't plan on using the sock for very long. I will use it now since I have it, but I plan on replacing the media caddy that came with it with an InTank media caddy, and putting an InTank fuge caddy on the other side.
OP

Rating - 0%
0   0   0
So we are staying put for another year, time to get some water into the tank! Let the cycling begin. ( I feel like I have to get a backdrop or something to prevent all the reflection on the tank lol) 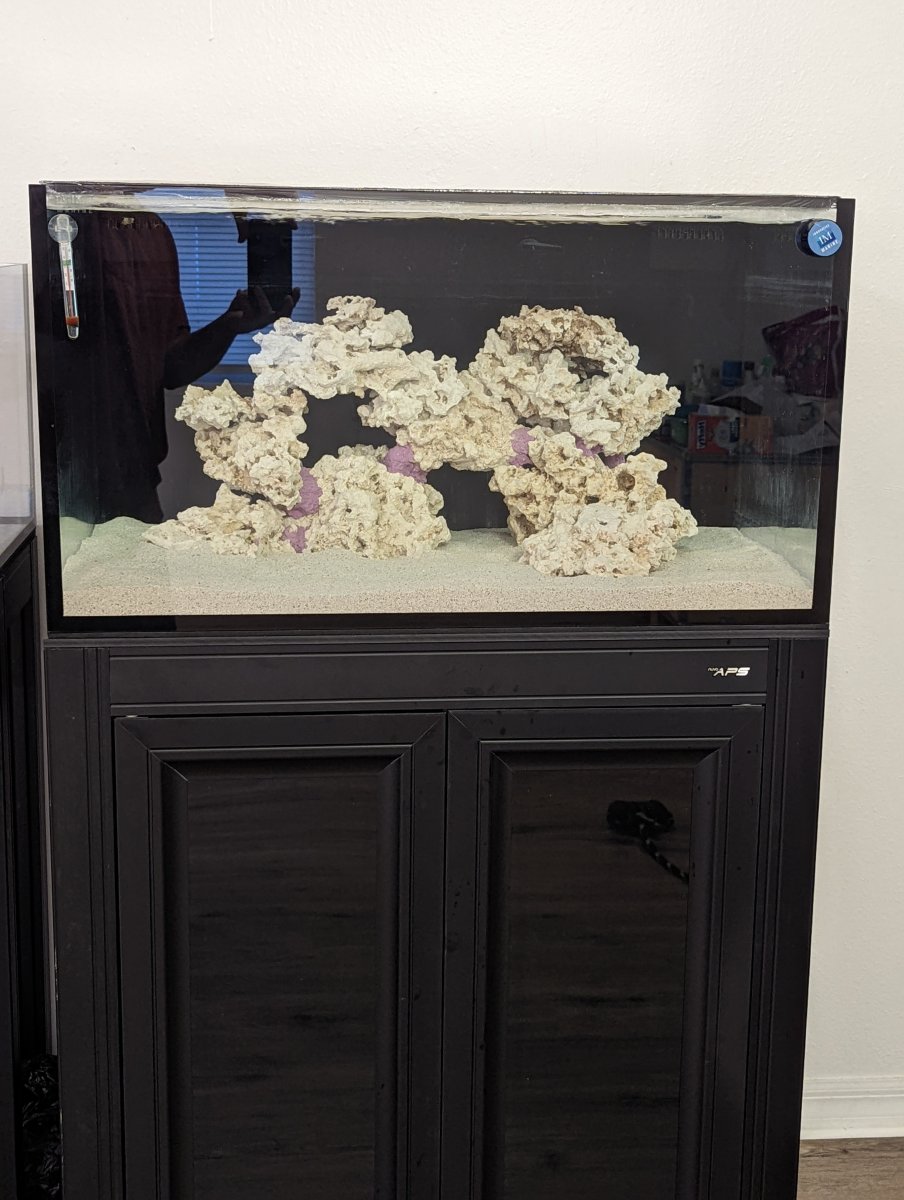 Rating - 0%
0   0   0
So tank has been running for about a month, bought a pair of Nero 3s since I saw them in stock and finally an ATO so I can stop depending on my roommate to check on the tank when I'm out of town for work. Still no light yet but figure it's not NEEDED just yet (the pumps were a last minute purchase, was originally planning for the lights this week and got sidetracked lol). Added a pair of clownfish this weekend, think they will be the only additions for a while. 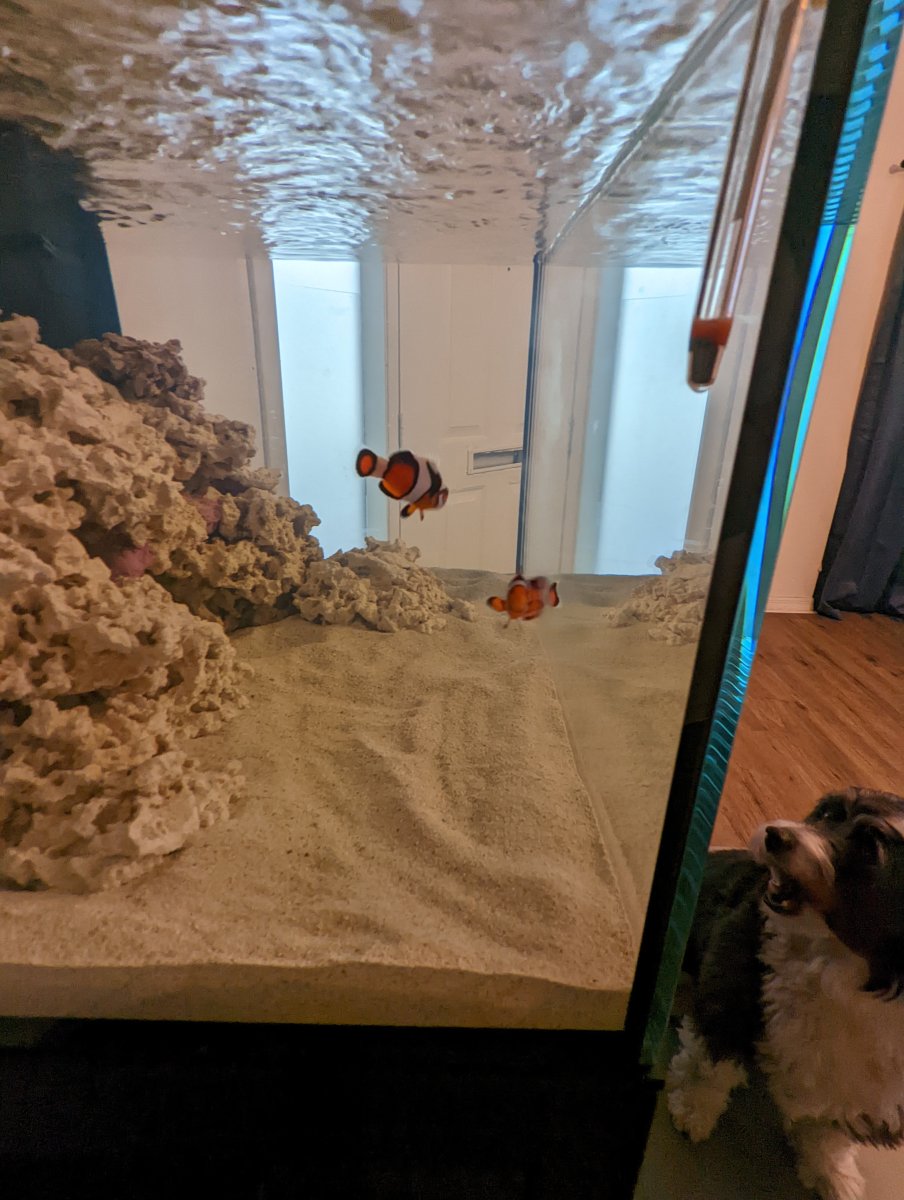 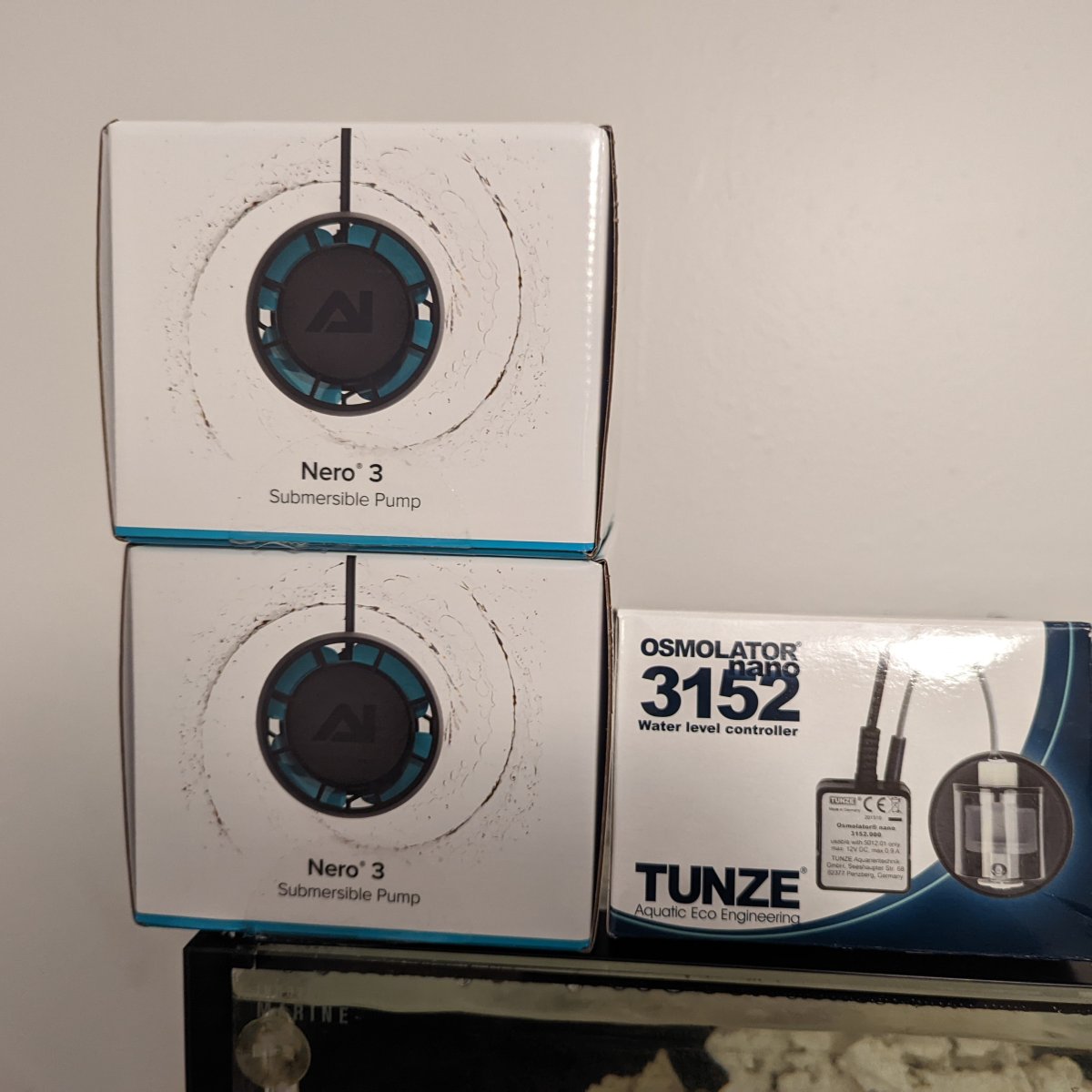 Rating - 0%
0   0   0
Let there be light! So I have been debating on lights since before I got the tank. Originally I was kind of set on getting kessils since others with this tank seem to have gone in other directions and I just wanted to try something new, but I ended up just going with what I found available on marketplace when I had the funds... Pair of G5 XR15s 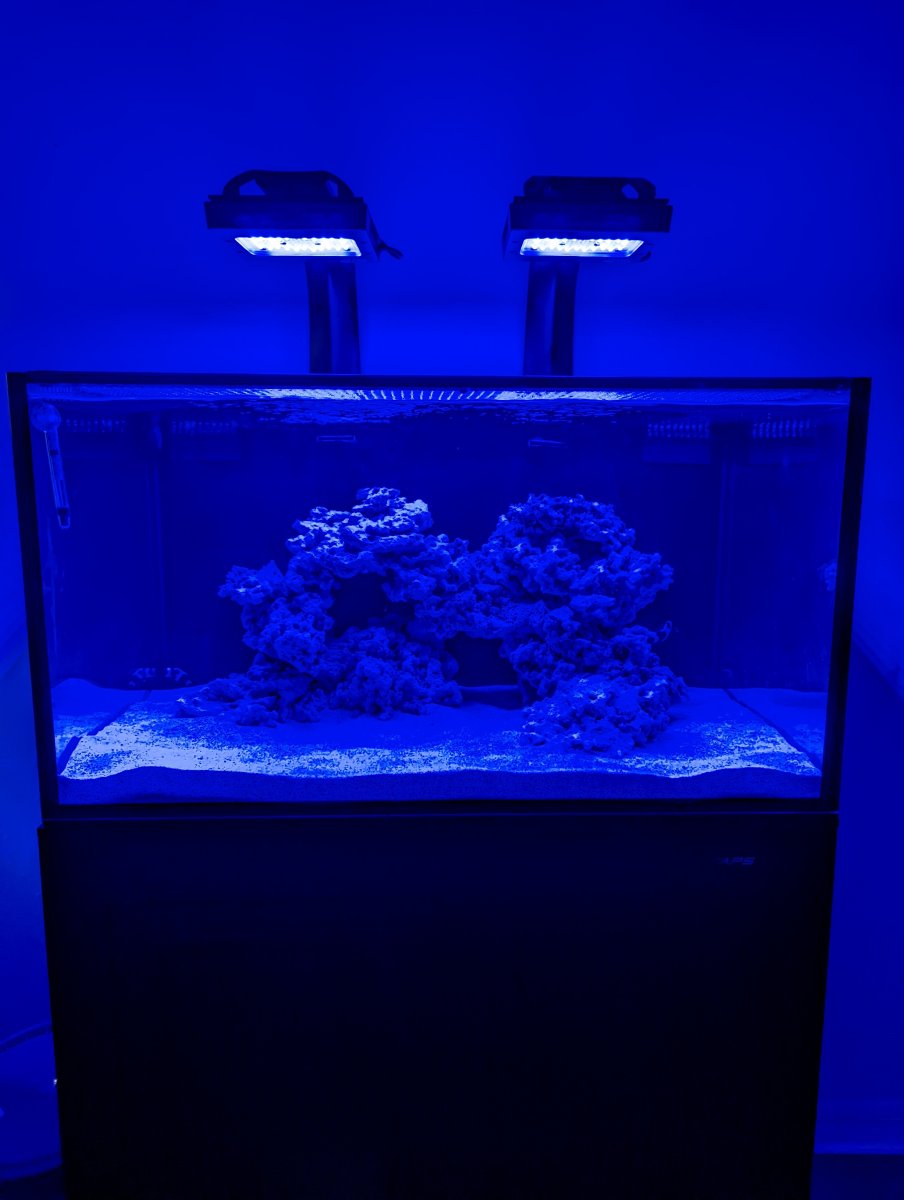 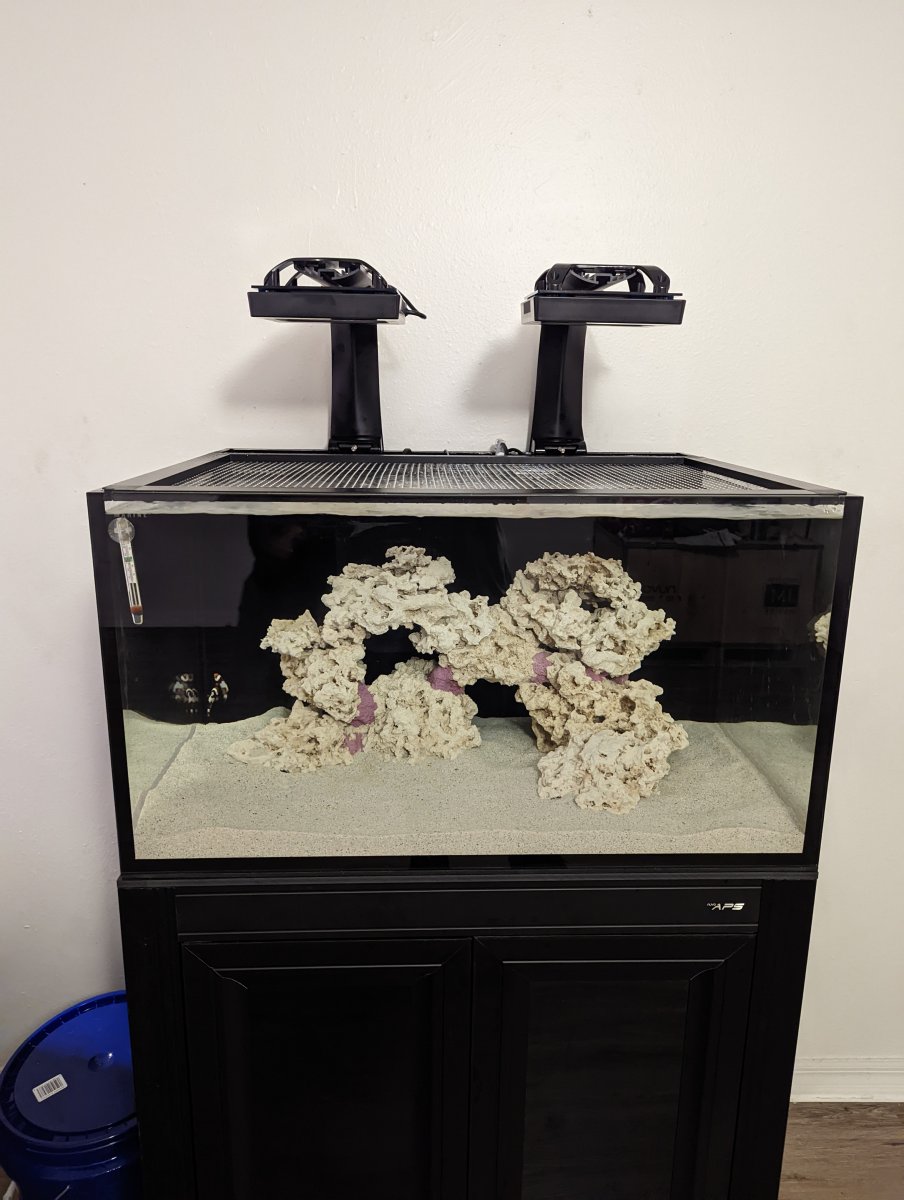 thelonereefer1 said:
Awesome, looking forward to following along. Let us know how you like those Nero 3’s!
Click to expand...

Havent set these up just yet, not sure where to put them/aim them. Will have to check the forums and see what others have done, and I don't have any coral yet so guessing once I do that will affect their setup as well.
T