Major Rescape from NSA to IDK

Rating - 0%
0   0   0
Around the time that videos from Bulk Reef Supply started floating around I had decided to set up a new tank (See That Build Here). I wanted to take everything that I had learned in the two years of being in the hobby at that point and apply it to a totally new setup. I also loved the way that the Negative Space Aquascape looked... well things don't always work as you'd expect them to. After 2 years my tank was still having some serious struggles. Though I wasn't losing fish, I was losing corals and experiencing ugly tank syndrome from 6 months to the 2 year mark. A few weeks ago, my wife and I took a trip to Ambergris Caye in Belize. When we climbed back up onto the boat from one of our dives I looked at her and said, "My tank sucks. I'm redoing it." Two weeks later, I've finished the project.

I got lucky, I had a ton of extra dry rock and sand that I never used when doing the last build. I also had some large plastic storage bins that I converted into tanks for the coral and another for the fish. I moved everything out, pulled out the old scape and spent a cumulative 35 hours (sincerely) constructing the new aquascape. I knew that the last one had several issues: 1) it was far too open. Fish had very few places to hide. One had even taken to hiding behind the magnetic scraper due to lack of any other spots. 2) Too much of the rock was hidden in shadow and a great deal of the rest of the rock was up too high for any coral to grow vertically even if it could deal with (what I assume was) insanely high PAR. 3) While the scape was beautiful and creative it just wasn't natural. I knew it, the fish knew it... it was time to change.

A common structure that I've seen when scuba diving and snorkeling is a half oval-like shape, flat on the ground (rather than an arch) that is lowest on each end and then builds up as it approaches the center. As it does this it often curves forward towards the opening of the shape. Every time that I saw it I knew that I wanted to mimic it, thus I used that as inspiration for this build. I also wanted to see less of the back wall of the tank, but didn't want the fish constantly hiding behind rubble. Simultaneously, I wanted more dimension to the structure and really wanted to use the space along the sides. This was something I had attempted with my first tank, but it created a nightmare situation when trying to clean the glass with very little room between the rock and glass. Lastly, I wanted plenty of caves and overhangs to give the fish places to hide when they wanted.

I'll be brief, because I know that most don't want to see a set of instructions. To solve the afore mentioned issues, I focused on the shape that I liked, built along the back wall of the tank, in addition to a portion of the sides as well. I did this layer by layer (meaning that there really couldn't be much planning beyond the existing layer). As I laid down a section using super glue and accelerant I would then use Great Stuff Pond and Stone to fill in the area between the rock and wall/glass. I'd move on to a different section and then return to the first about 3 hours later, tare off the hard outer layer of foam and repeat the process. I also used foam to fill in cracks and crevices that would lead into the back section so that fish didn't get trapped. Importantly, I also used E-marco-400 mortar to reinforce the joints. Some sections also had to get mortar ever layer, rather than waiting until the end. The reason for this was because overhangs and caves made it VERY difficult to do if it wasn't done early on. Lastly, I went along the final edge, covering the foam and a bit of the rock with aquarium safe silicone. This is because the foam will discolor and degrade when exposed to UV for long periods of time. I suspect that this will prevent that. In retrospect I wish that I had done a time-lapse. I did get pictures throughout the process, but because I was using clingwrap to protect the glass from glue and cement (probably wouldn't have protected against rock scrathes), the picture quality is lacking. I will use window blackout on the outside of the tank to cover the sections that only show foam. I've done this on my vivarium and it has held in place for 3 years. I did use silicone as an adhesive though. The nice thing about all of this is that I can remove everything with a little bit of elbow grease without damaging the aquarium if I ever want/need to!

Before the pictures, one last note for anyone considering this... The foam does not adhere well to the glass. In many sections it has pulled away and created cavities. I'm very glad that I did not use this as structural support. All of my rockwork is self supported, the foam is only to fill gaps! The silicone was also essential for sealing things up, otherwise they would have been MORE LIKELY to get stuck behind the rock (and foam).

I'm VERY pleased with the final product. The fish have already been exploring nearly every one of the caves and even the timid fish is out in the open now that it knows it can retreat to within a few inches of any place it may be swimming. Also, I couldn't help myself... I created two caves that have a window for me to look into from outside the tank. I've already seen one of my gobies hanging out in one! By the way, the fish are already in there, I've included several pounds of rock from the previous build in the sump, along with several pounds of sand from it. I didn't have much of a choice given the circumstances anyway. Coral will wait for 4-5 weeks as I run with lights out during initial setup.

Please let me know what you guys think. Would you have done anything differently?

P.S. I did get a PAR meter. I'm not losing anymore coral in this tank because of incorrect placement. I spent less on that meter than I've lost in coral over the years.

Link to video - Pictures don't do it justice and don't show the depth: Short Clip 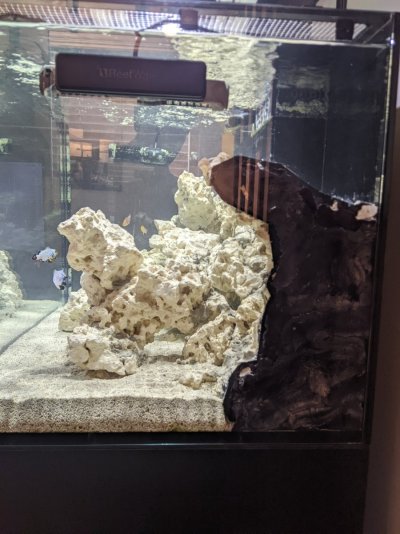 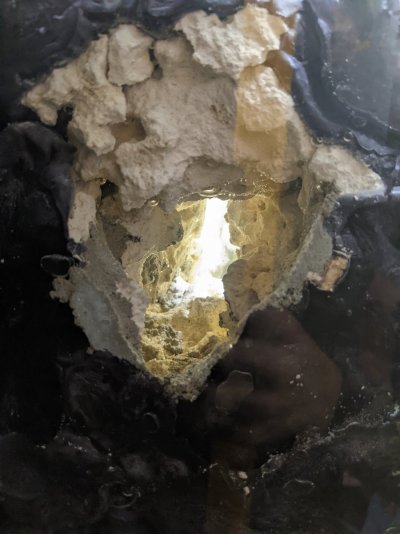 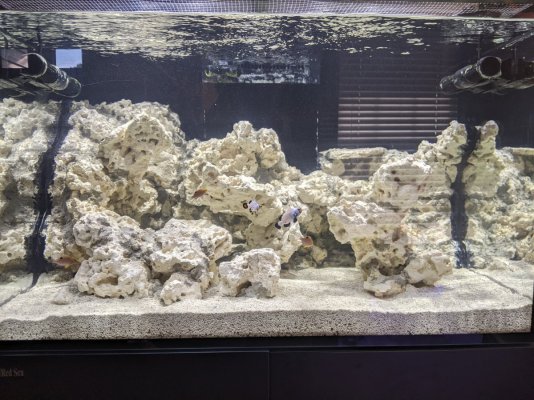 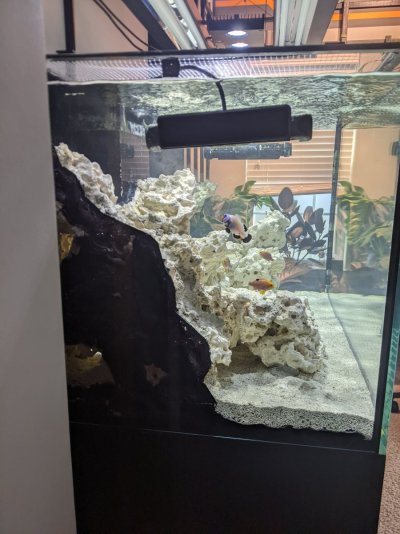 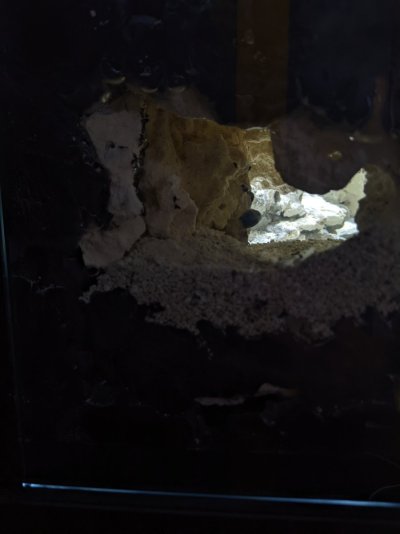 Rating - 0%
0   0   0
Sooo you went back to wall of rocks. It still look nice though. Good luck with the refresh. There are ways to do NSA with lots of hiding place for fish.

Rating - 0%
0   0   0
1. Your original tank did not look like NSA - or am I looking the Wong pictures.
2. I disagree completely with the 'debate' - since - its your aquarium. - and if you are growing corals - they will grow in where they want - and NSA quickly becomes filled with coral.

MnFish1 said:
1. Your original tank did not look like NSA - or am I looking the Wong pictures.
2. I disagree completely with the 'debate' - since - its your aquarium. - and if you are growing corals - they will grow in where they want - and NSA quickly becomes filled with coral.
Click to expand...

Unfortunatley, the coral in my NSA hadn't grown much at all in 2 years. I'm sure it was operator error though. Things I hope to address this time around.

zheka757 said:
its funny because, im actually switching to nsa, from big boulders in the tank
Click to expand...

Haha. I'm sure I'll get the itch to try something different in a few years. At that point hopefully I'll get a new tank rather than have to restart. 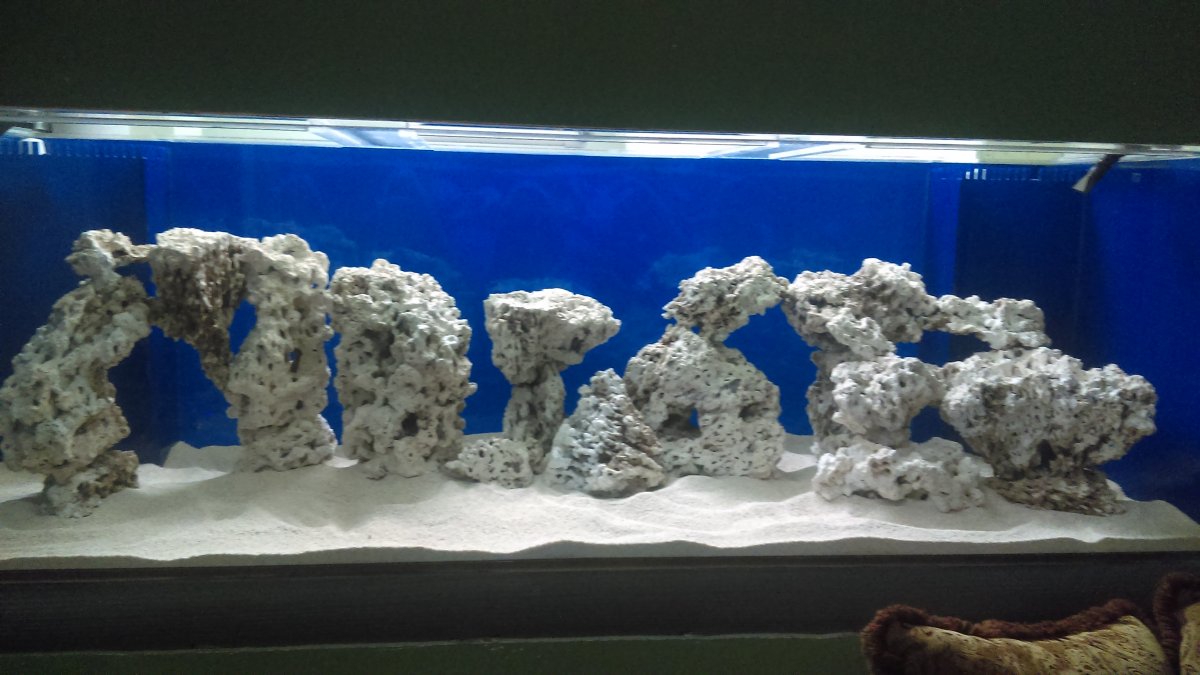 This is tank now 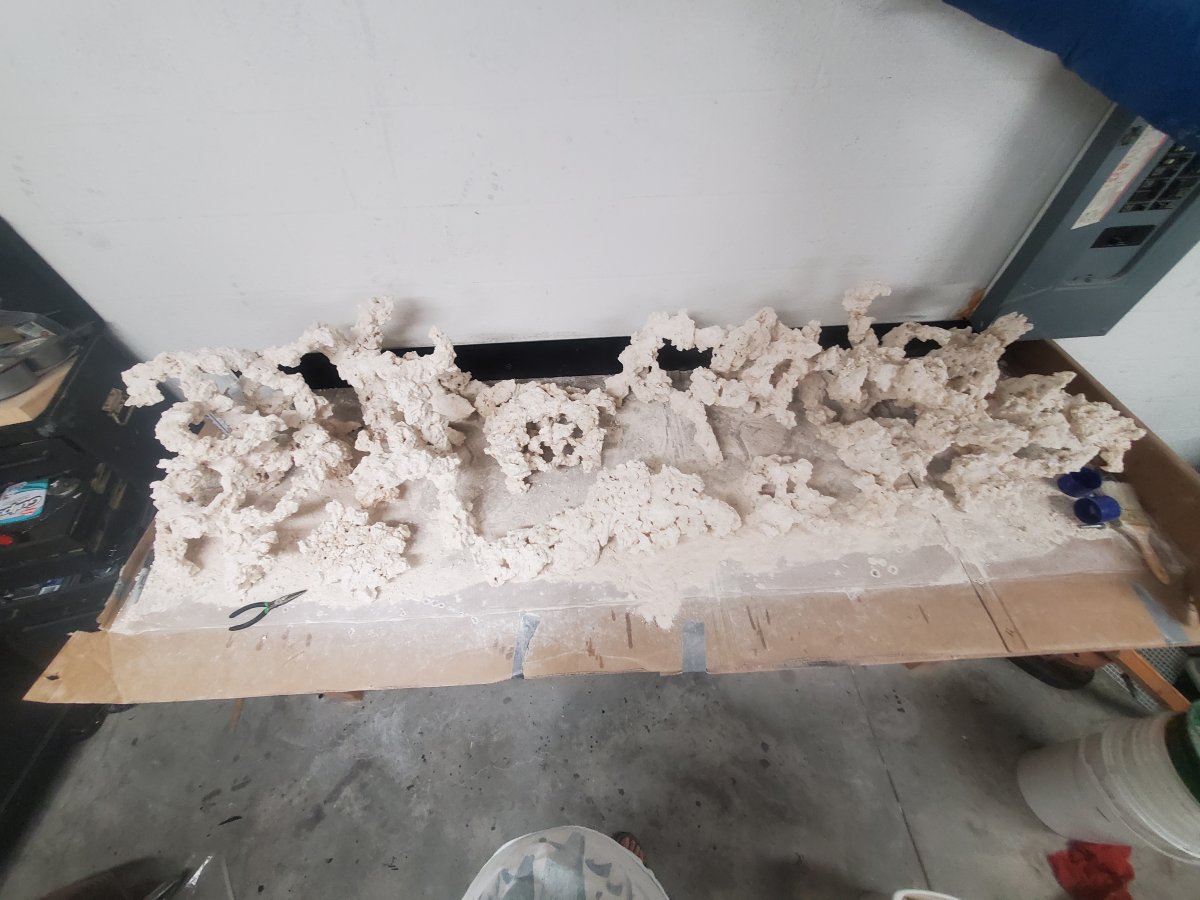 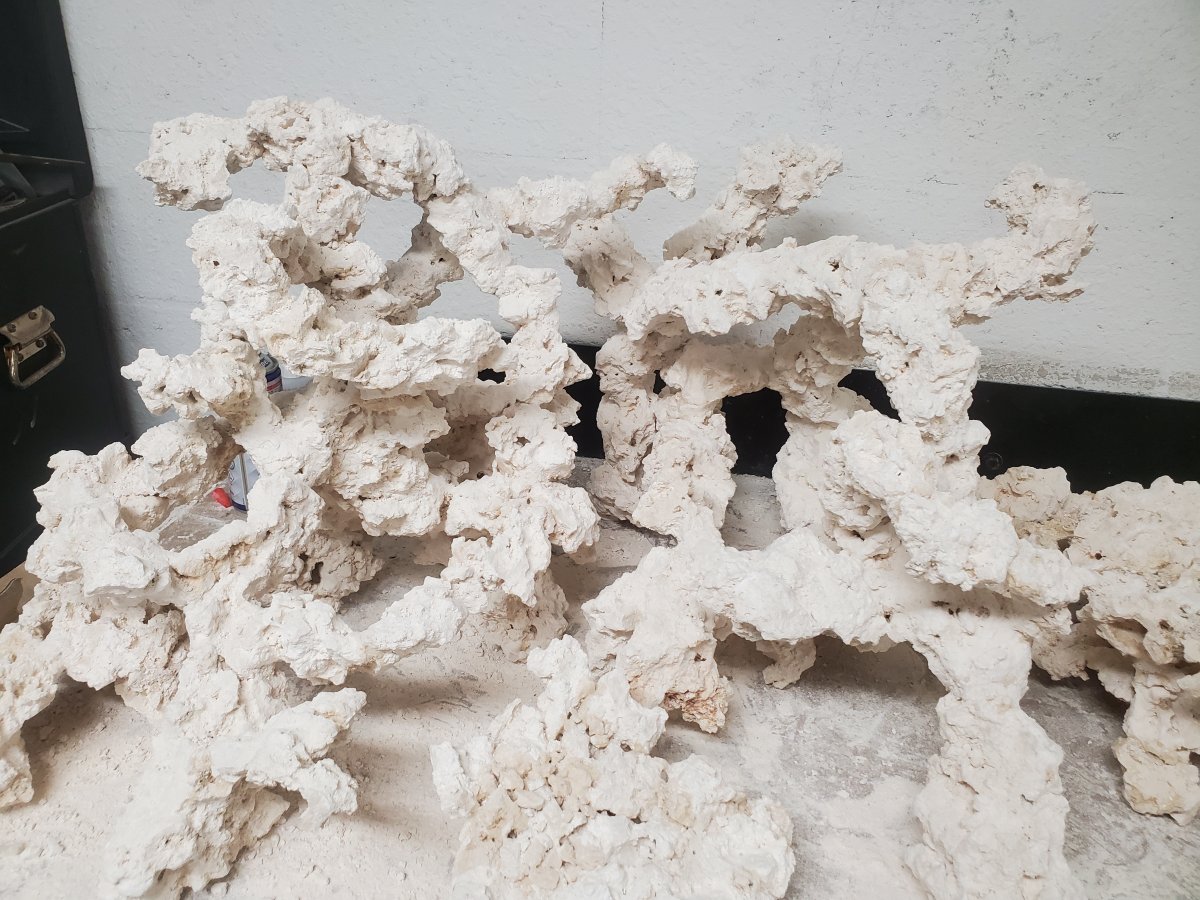 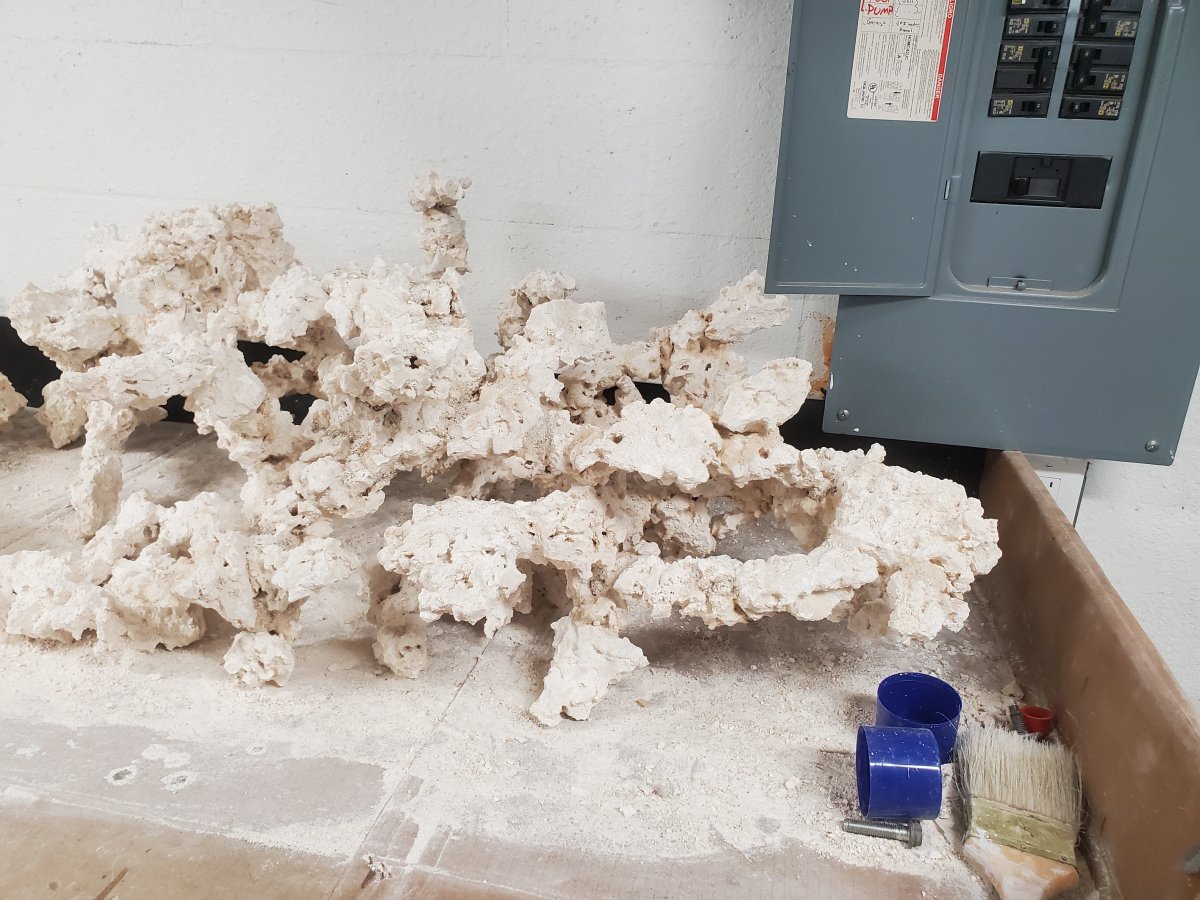 zheka757 said:
This was my initial set up

This is tank now

Pretty neat. I really like the depth that it has

Rating - 0%
0   0   0
An update:
Went through a terrible fight with dinoflagellates. Started with Amphidinium and as I out competed those by increaseing phosphate and nitrate in addition to diatoms via silicon dosing I started to see an increasing population of Ostreopsis. Within 2 days of identifying massive populations of Ostreopsis I ordered a UV sterilizer. I continued to monitor phosphates and nitrates while maintaining a slowly increasing dosage of silicon (10mL per day at the end). I installed the UV sterilizer the day that it arrived and started a 36 hour blackout after thoroughly scrapping as much of the rockwork as possible using a brush that I got from BattleCorals. About 24 hours in I did another rock cleaning (at this point I noticed there was already a significant difference). When I ended the blackout the tank looked incredible! Here is a picture I took this evening to show the progress and my success in beating not just one, but TWO types of dino with this approach!

I'm still loving the way I made the rockwork seem as if it projects out of the glass. I was quite pleased when a friend visited last month and commented that it looked as if I used a laser to cut out a section of reef.

I included a picture to try to show the cove in the back. The fish seem to LOVE that area - they all sleep back there and the clowns have started hosting in the duncans.

Finally can stop stressing and just enjoy the tank! 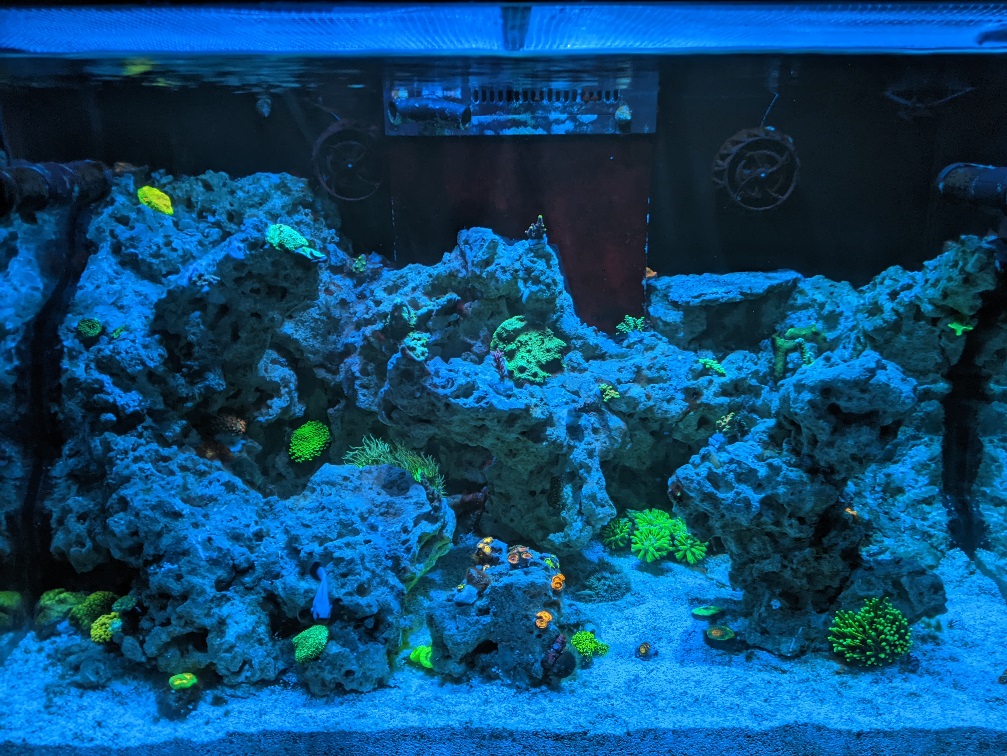 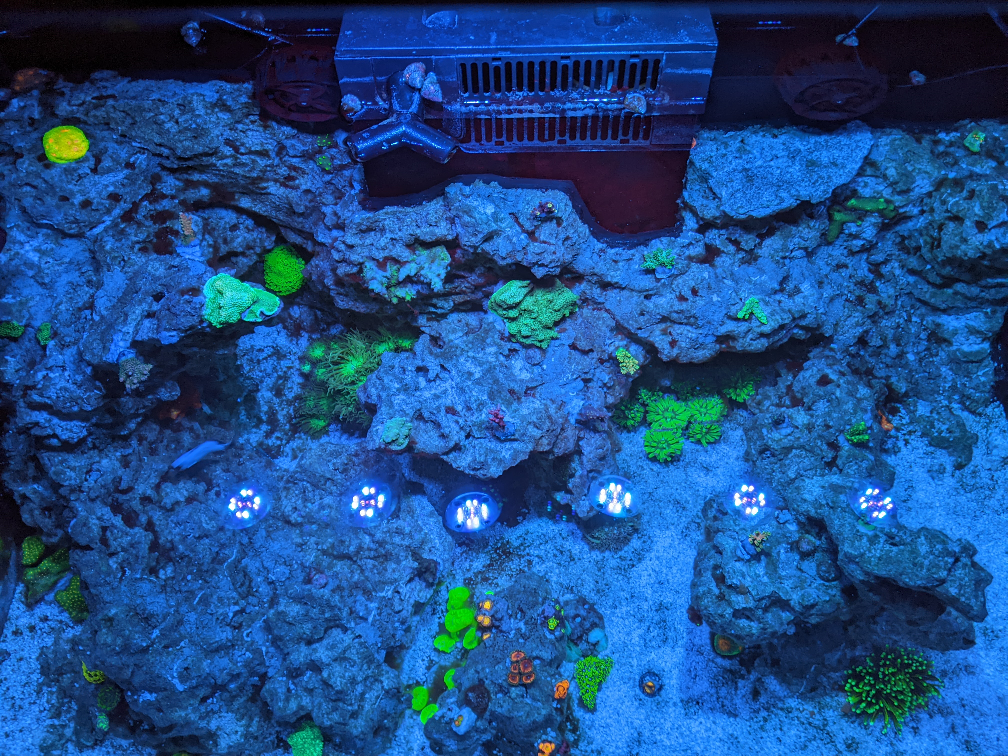 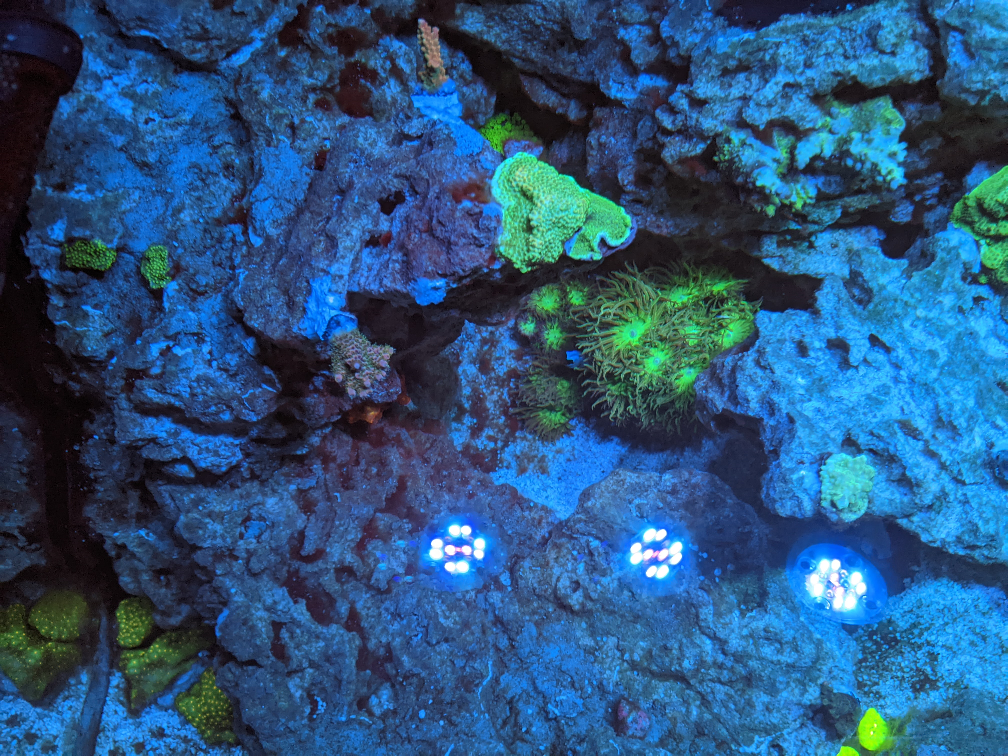 Build Thread My first tank after 20 years away