Backstory: my son and I setup a biocube 29 about 15 years ago. It developed a leak a couple months ago and I had to make some quick decisions and action to save the inhabitants, mainly Nemo who I’ve had for ~ 11 years. After the replacement biocube arrived at Neptune Aquatics with a crack (and my wife saw all the beautiful tanks they have setup) I ordered a Reefer 170 & started gathering all the other items.

We looked at all the lighting options and decided on the Kessil a360x and a controller. I also picked up an Octo various 4, which I exchanged a few days later for an Octo various 2. In hindsight, either will fit, but I thought they would interfere with the space available for the skimmer, but I was wrong.


Here’s some pictures of progress:
Unboxed the stand/cabinet 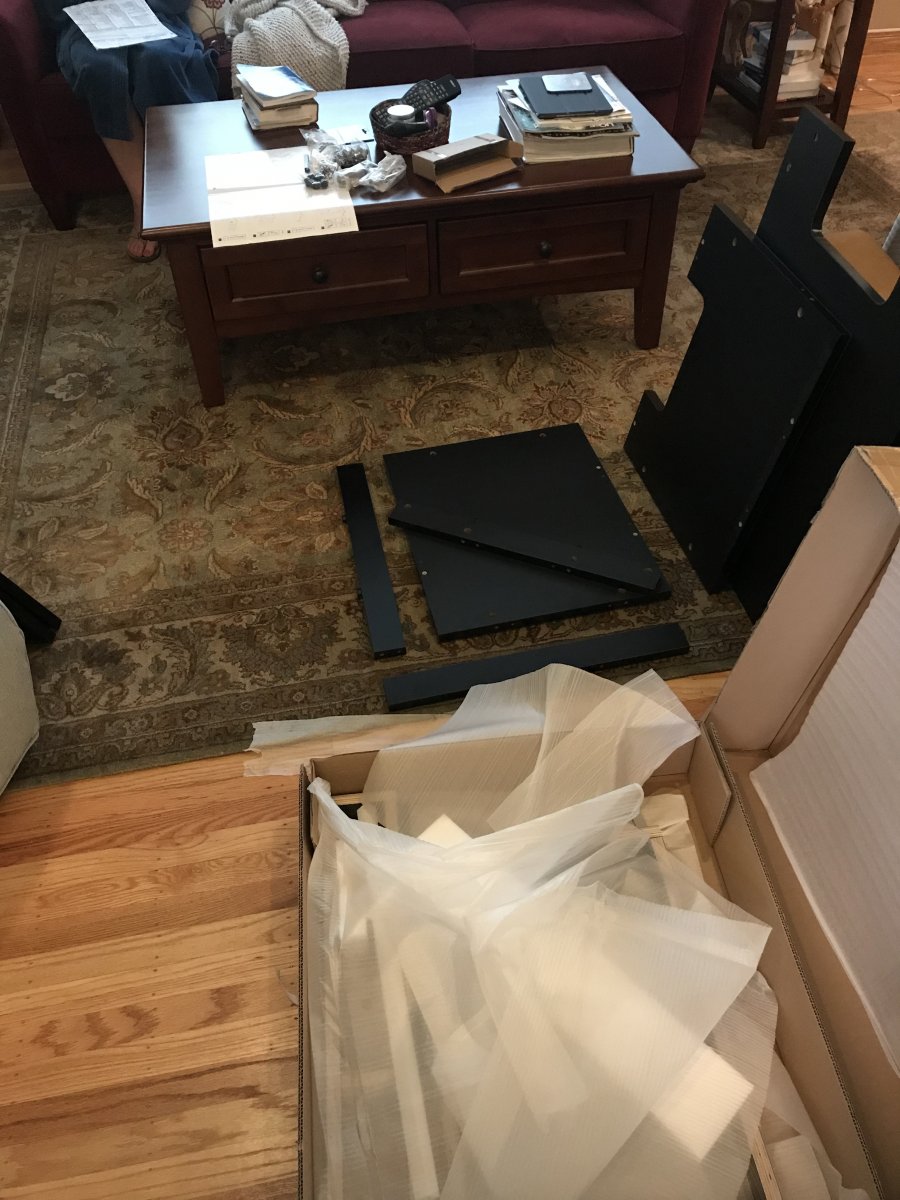 Looked at the construction of the stand and decided I should ask about gluing it, posted this thread:

Setting up a new reefer 170 - should I glue the stand?

From the instructions it’s built like an ikea dresser which eventually starts falling apart, and I’ve repaired them with glue. Should I glue the Red Sea stand before I put the aquarium on it? Thanks in advance!

And here’s a picture of it after it’s assembly with glue. No door yet. 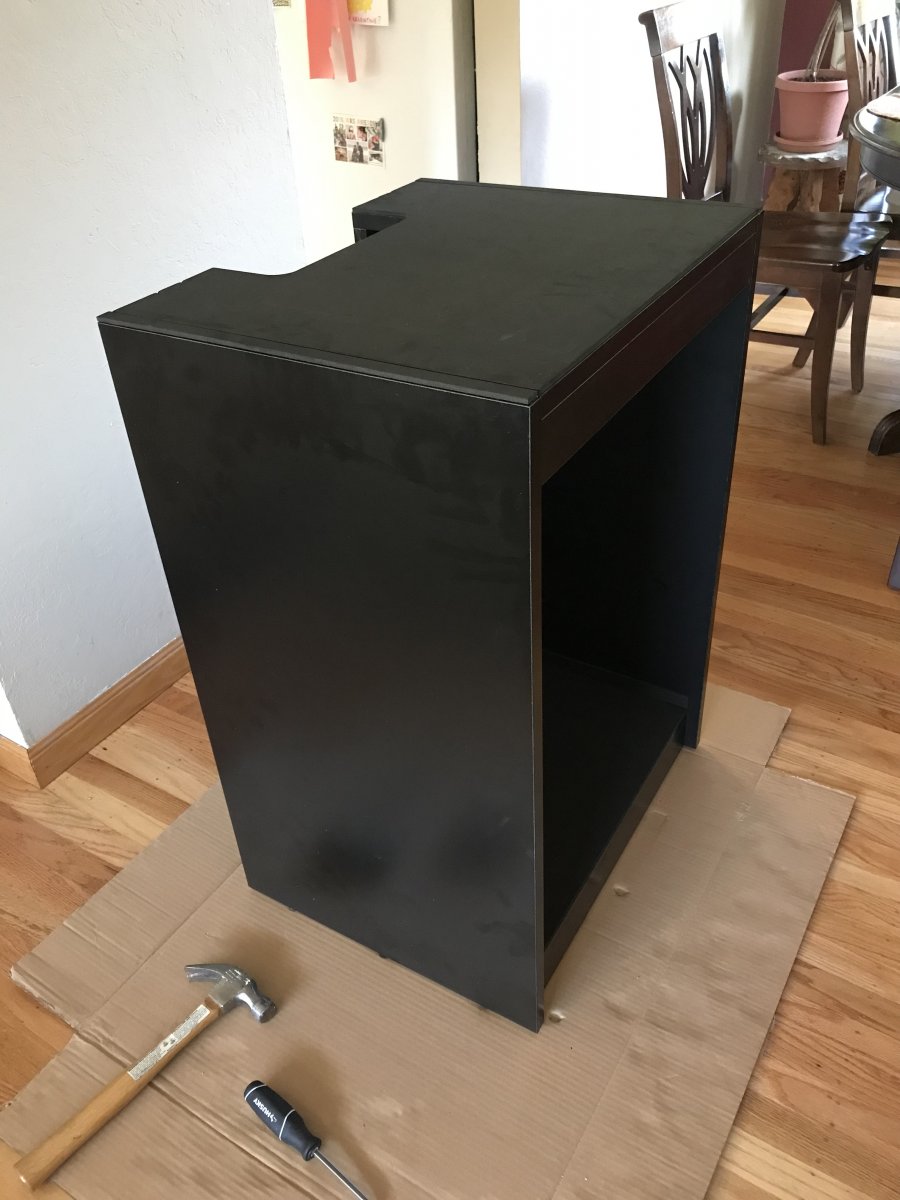 Had my wife and friend help move the existing tank over so we could put the new stand and tank into its final location. To move the biocube, I drained half the water, slid it 3-4 feet down the wall, then re-added the water. Also put plastic under the biocube to slow the leaking into the hardwood floors.

As my plan was to relocate the reef from the biocube, it was suggested to start with fresh sand.
Here’s the reefer in place with sand and water: 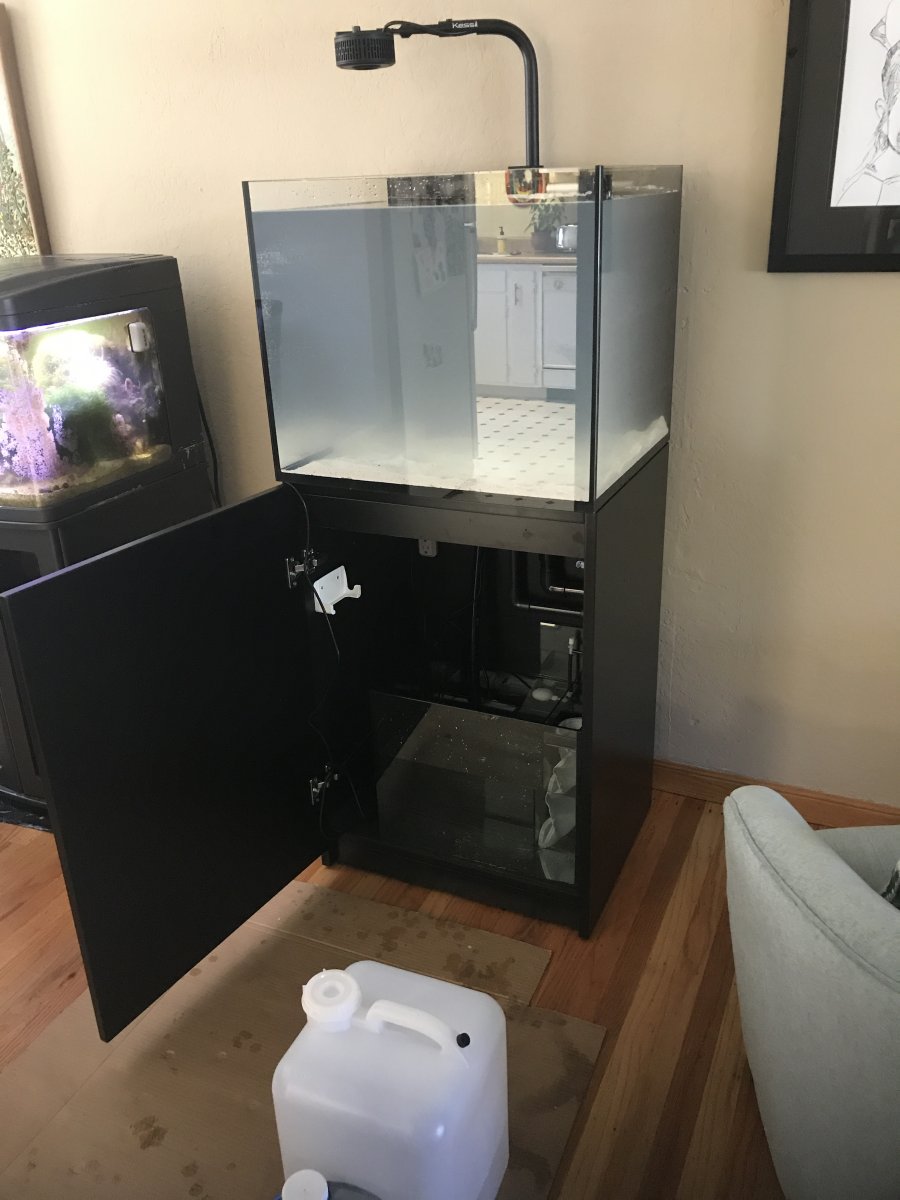 I waited a day for things to settle and fired up the pump to check for leaks. Yup, I had leaking where I adapted the 3/4” to Red Sea (metric) parts. A couple more trips to Neptune Aquatics (my LFS) and I was able to obtain fittings that didn’t leak. Then I installed the heater in the sump and started bringing the tank up to temp.

I waited one more day, and on Labor Day, checked the biocube for the severity of its leak. It was leaking several ounces a day, enough to cause pools of water on the plastic and run off onto the floor. I decided to move the whole reef that day before the new reefer was cycled, or had started a cycle.

Nevertheless, we got everything moved over that I could find, live rock, the anemone, a couple bunches of macro algae, and lots of Green Star polyp coral. I removed some of the GSP, and will remove more later as I get some other types of coral to fill in. I was unable to locate any of the smaller critters, crabs, worms, etc, so I kept my eyes on the biocube for a few days. Those critters never turned up in the biocube, but they had made it to the reefer, presumably hidden in the live rock.

So, here are some pictures of how everything is looking one week after the reef relocation. It took a few days for the GSP to come out. 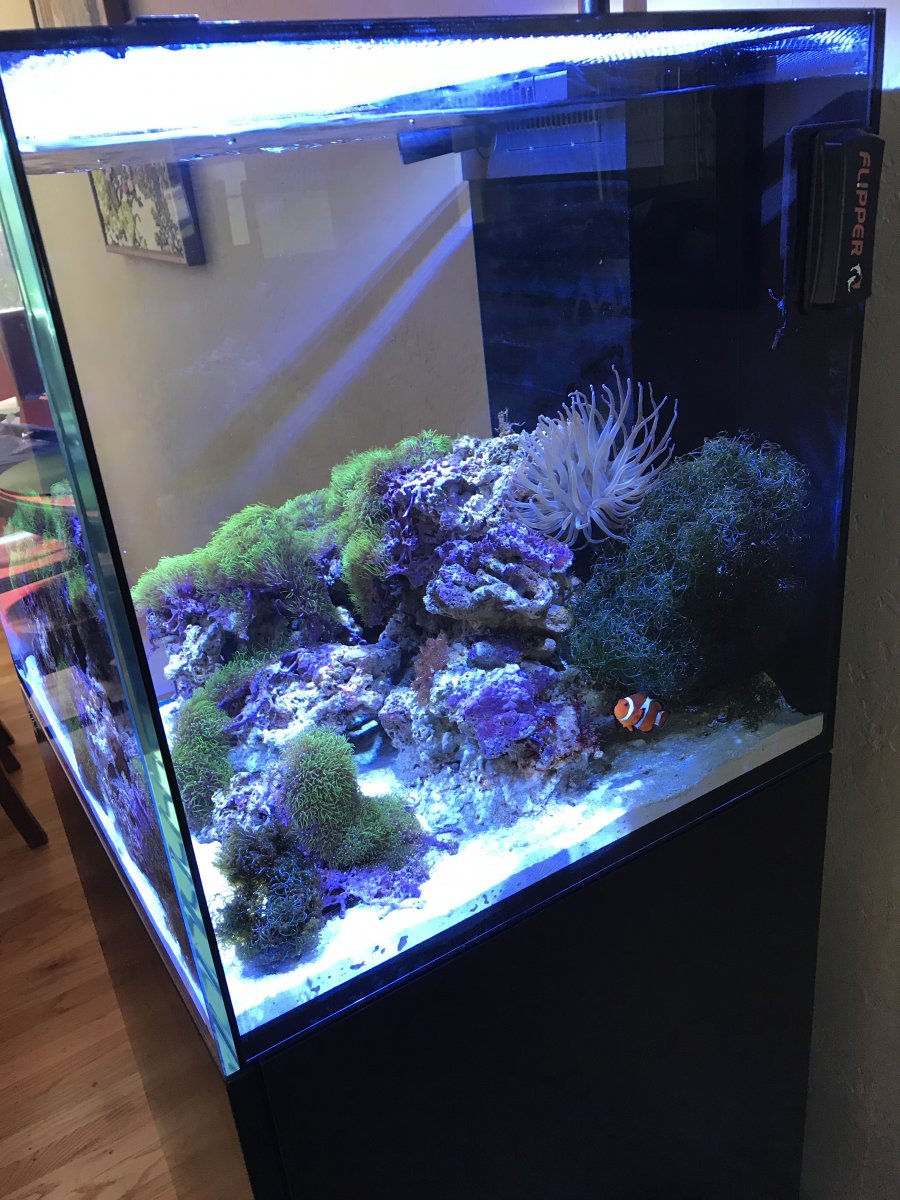 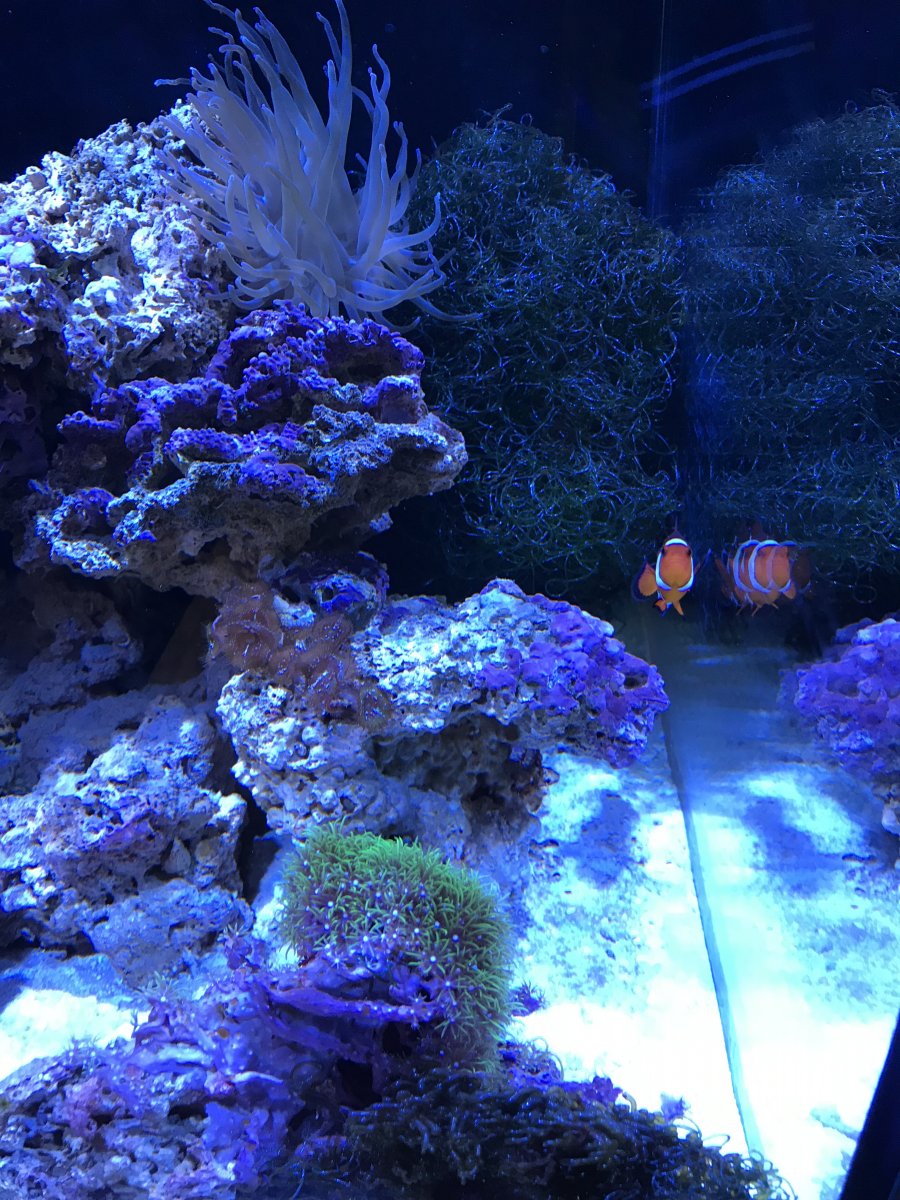 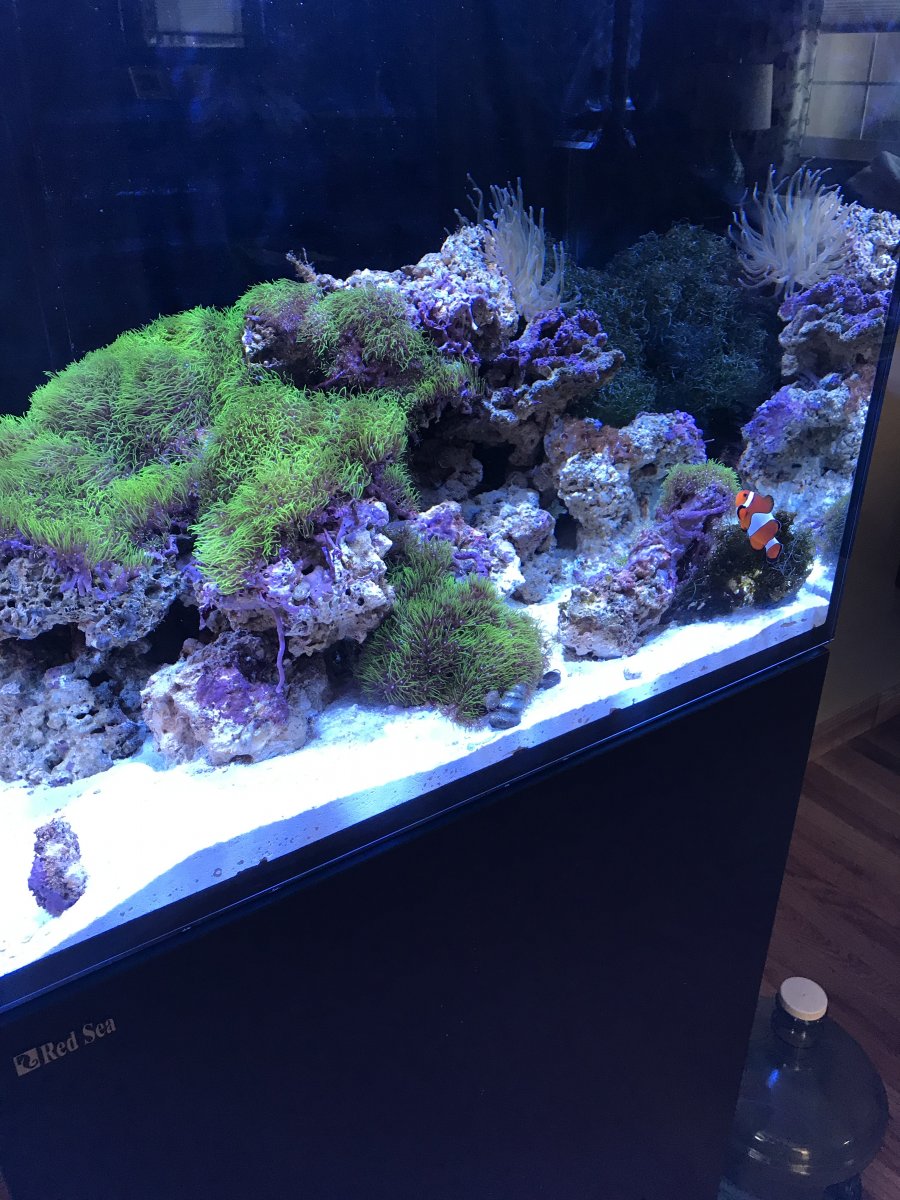 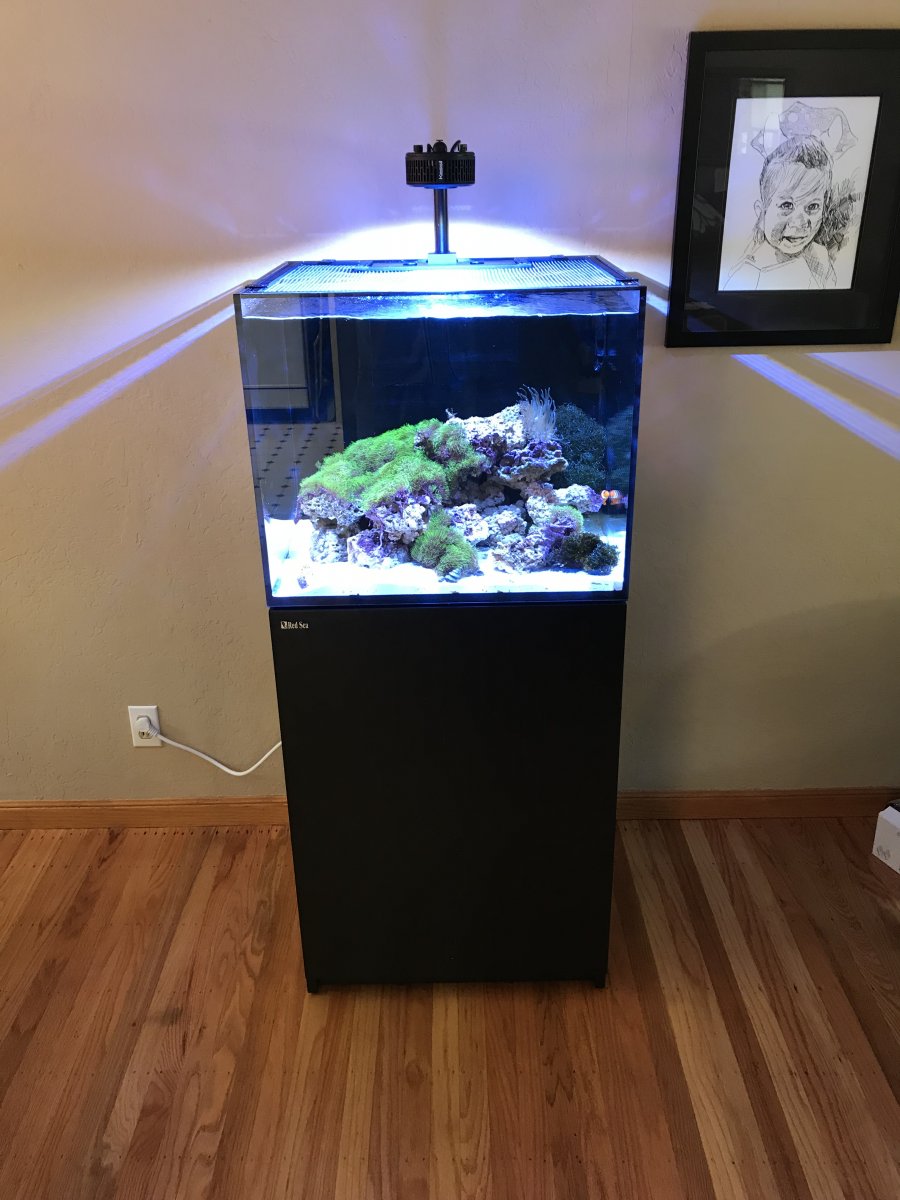 Now I’m waiting for my Random Flow Generator to arrive, and a Kessil H80 light for the refugium, while thinking about what I want to add — another fish or two, some more Zoas.... after a few more weeks to let everything stabilize in the new tank.

Thanks to all the help I received, a lot from searching posts and my son in law, and Linh at NA. Nemo now has a new home.

Looks awesome. Any idea on what you plan on adding as a second or third fish?

Old Fritz said:
Looks awesome. Any idea on what you plan on adding as a second or third fish?

Also I work in a fish store and whenever someone calls a clownfish "Nemo" it makes me cringe because those tend to be the people that want to put them in a bowl with goldfish lol
Click to expand...

I am open to suggestions for a second/third fish. I’ve had quite a few in the past, I was thinking a 6 line wrasse or royal gramma, or three spot damsel... something easy to keep that can hold its own against a clownfish that’s been living alone for a few years. I expect Nemo to be territorial, although maybe not so much because of the recent move. Sorry about the bad association with the name, but this clown has been around for a long time.
D

Id stay away from a 6 line...they get p-issy and will harass every new fish you put in...

Hard to say how they'd get along with a clown that's been alone its whole life. If you think it will be aggressive skip out on easily bullied fish like the fire fish

Hard to say how they'd get along with a clown that's been alone its whole life. If you think it will be aggressive skip out on easily bullied fish like the fire fish
Click to expand...

The clownfish has had other tank mates, but in the last couple years it’s been alone. When I introduced other fish in the past, it was somewhat territorial, more so with fish that were similar

I'd suggest a Tailspot. Never an issue with my clown.

I went to the coral farmers market yesterday. Quite a show, lots of coral and vendors. I picked up a Picasso clown as a second fish, the two fish are getting along good. 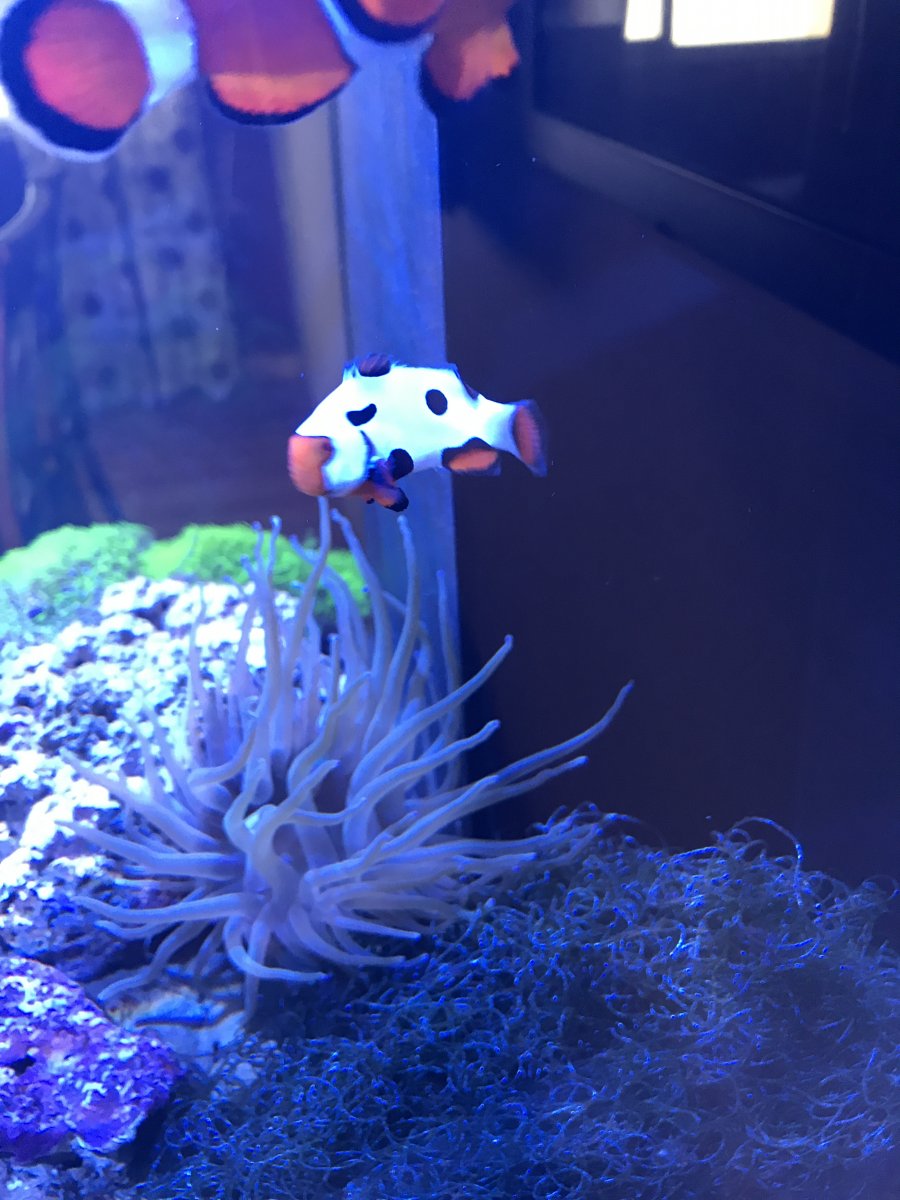 I also picked up some frags of ricordea and extreme utter chaos — they both have a lot of neon orange in them to offset the field of neon green star polyp coral. 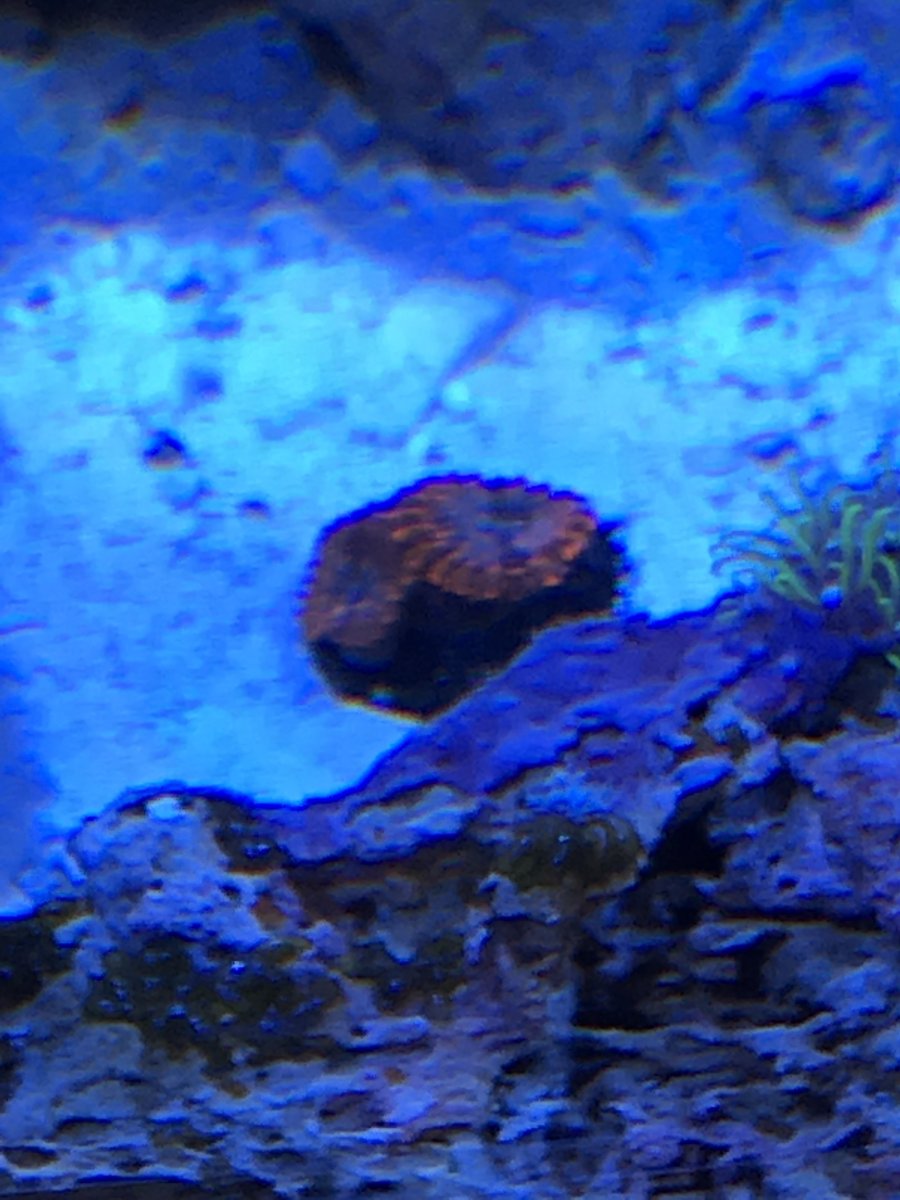 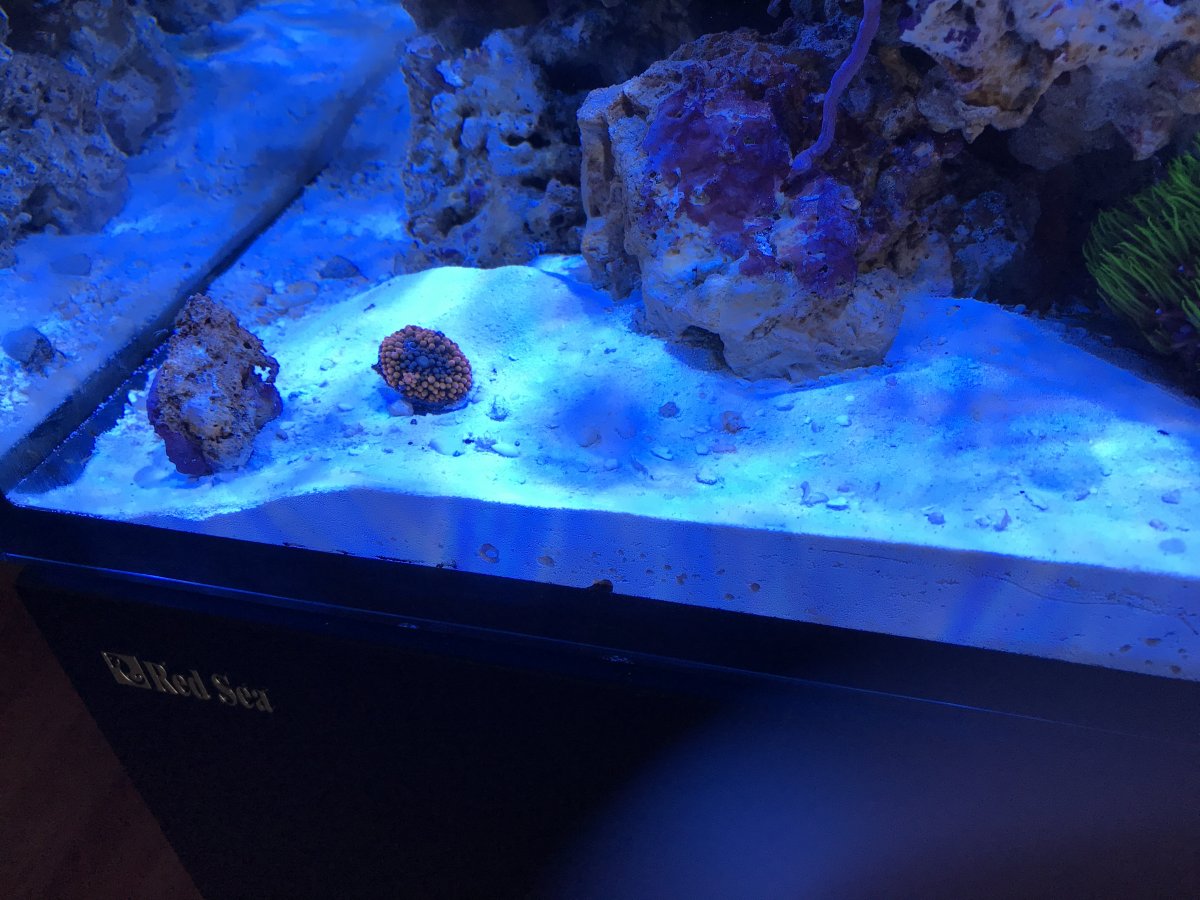 The event was really interesting— I’ve never seen so many reef hobbyists in one place at one time before, and it was really easy to talk to the vendors.
OP

Update: I received the VCA random flow generator and installed it a couple weeks ago. I wanted to play with it a bit and view the results before posting.

it really creates a random, turbulent pattern of flow.

Prior to the RFG, I was running my Octovarious 2 pump at 60%. After installing it, I noticed a decrease in return flow, so I had to adjust the return diaphragm down to control noise. I also cranked the pump up to 80%. Within an hour coral that was in what had been a low flow area was showing better extension, and the Anemone really liked it also.

Running the pump at 80% I noticed that it frequently sucked air into the RFG via little whirlpools, so after a week I turned it back down to 60%. The Green Star Polyp & Anemone sure like the flow. Oh, I also noticed an increase in the amount of detritus that gets picked up, especially at first when I put it in.

I’d say the RFG is a great addition— I don’t think I’ll need a wave pump, I have one, but I didn’t want to have wires running in the tank if I could avoid it.

I installed a Kessil H80 in the sump and moved the chaeto into the sump. I noticed growth in the chaeto today, so it’s doing it’s job stripping nitrates. 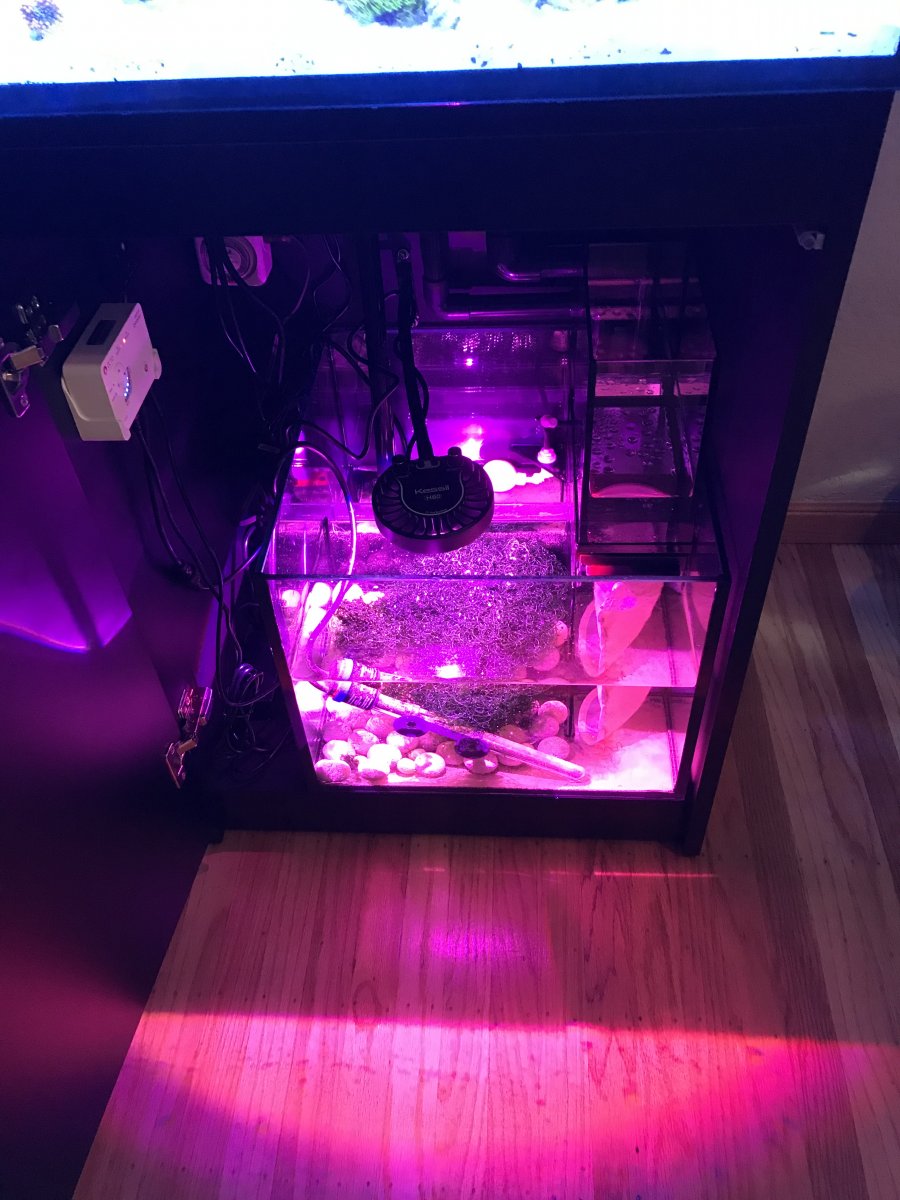 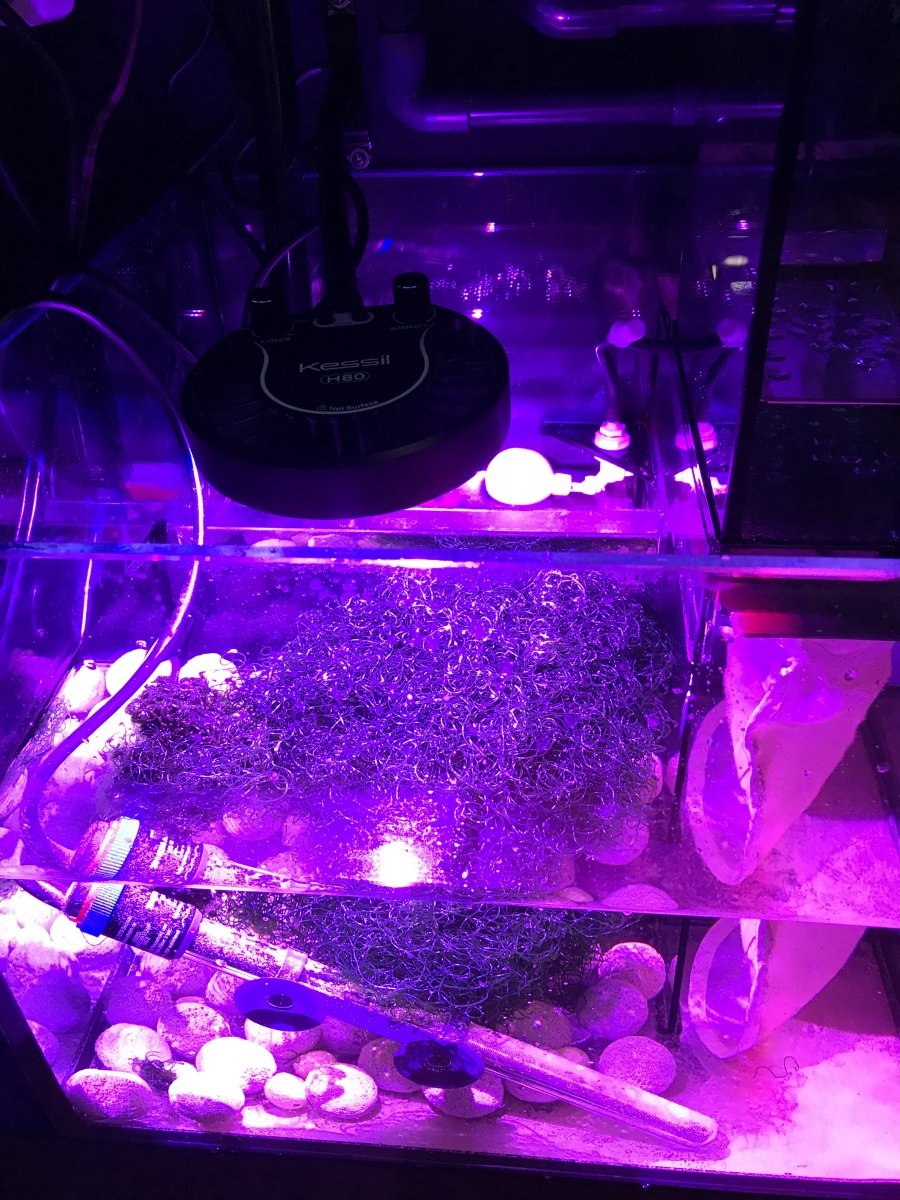 Thanks for the tip. Should I be doing anything special with the balls?
S

My LFS suggested putting the balls under the chaeto, in my previous tank I had removed all filtration so I was actually not planning to use any bio balls. I found that live rock and sand, with macro algae, keeps pretty stable water quality if feeding is controlled.

I’m curious why I would want to keep the balls separated from the algae, will they clog?

I added another partition to the sump and installed the tunze 9004 DC skimmer in it. I am happy with the functionality of the sump now.

I used gel super glue and then JB waterweld to hold and seal for the higher water level needed by the skimmer. 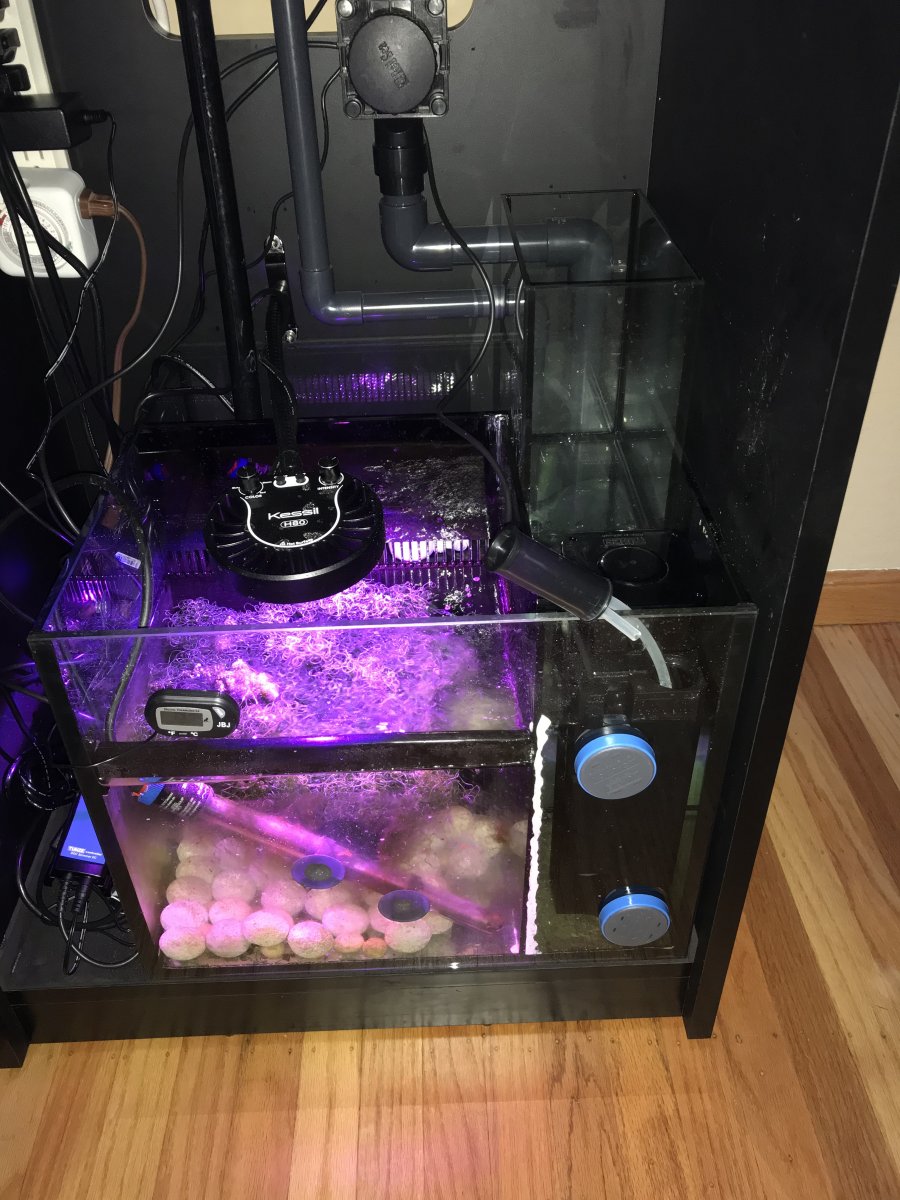 splitting_lanes said:
I added another partition to the sump and installed the tunze 9004 DC skimmer in it. I am happy with the functionality of the sump now.

I used gel super glue and then JB waterweld to hold and seal for the higher water level needed by the skimmer.

What are you using as a partition?
OP

Brittany721 said:
What are you using as a partition?
Click to expand...

I used both of these pieces from another member -- he's got one posted here, and another piece posted on another forum. I used the long one first, but to get the separation and water level needed for the Tunze 9004 both are required (although some install the skimmer into the drain, but I found it too hard to service back there) 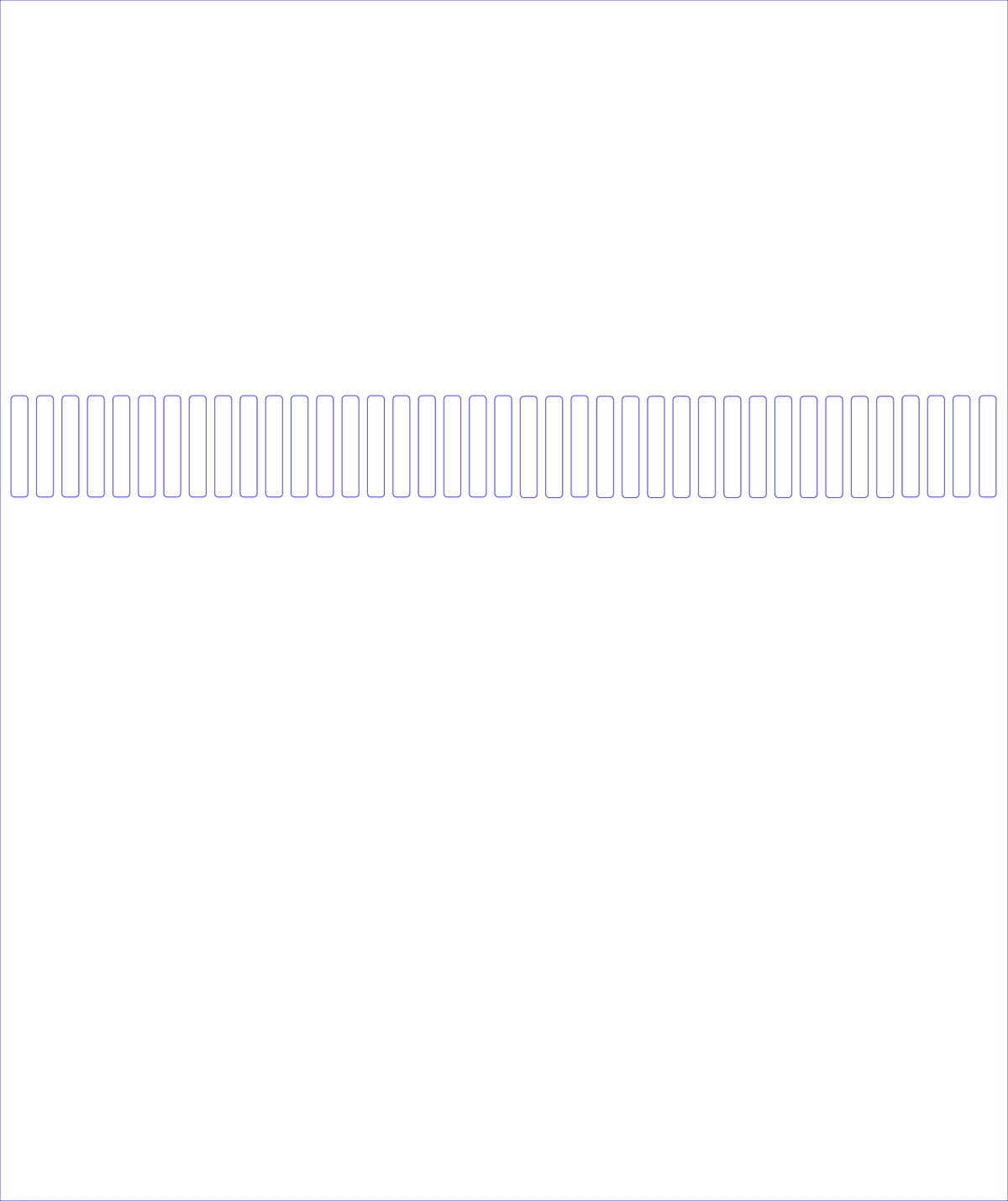 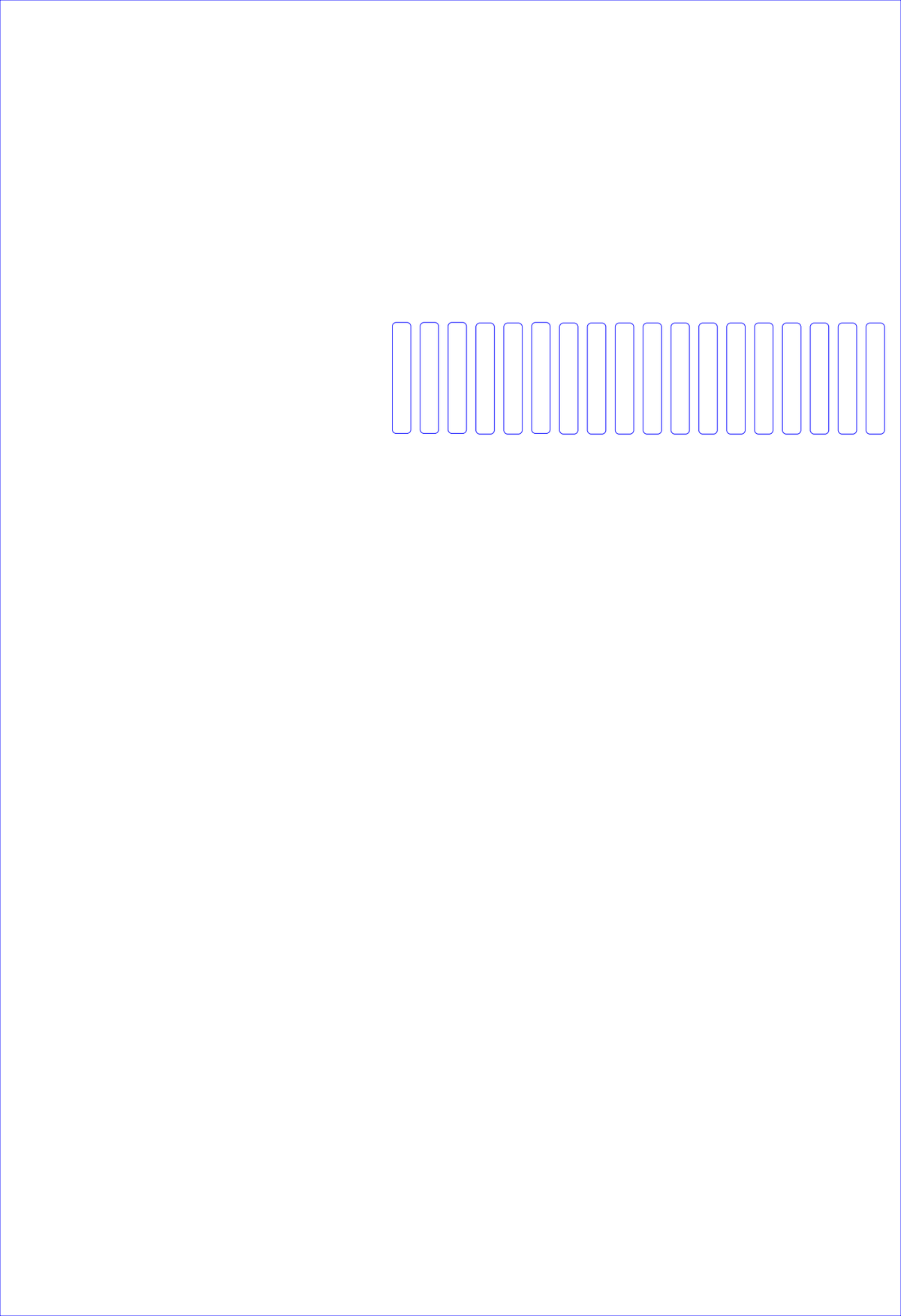 You'll need some Gel superglue for the structural hold, and then JB Waterweld to fill the small gaps. I think it's a great modification.

FYI, you don't need to drain the sump to do this modification, you can do it on a stocked tank, also, these pieces can be ordered from https://www.ponoko.com/ -- I used black .22 acrylic
Last edited: Nov 22, 2019
OP

The sump is in a place where I’m going to keep it like this for a while.

i ordered the Hanna hireef set so I can start monitoring parameters for stability. The tank has been up three months now, with all the live rock from my previous tank.

Running out of room in the sump, may need to get creative to dose Kalk, TBD 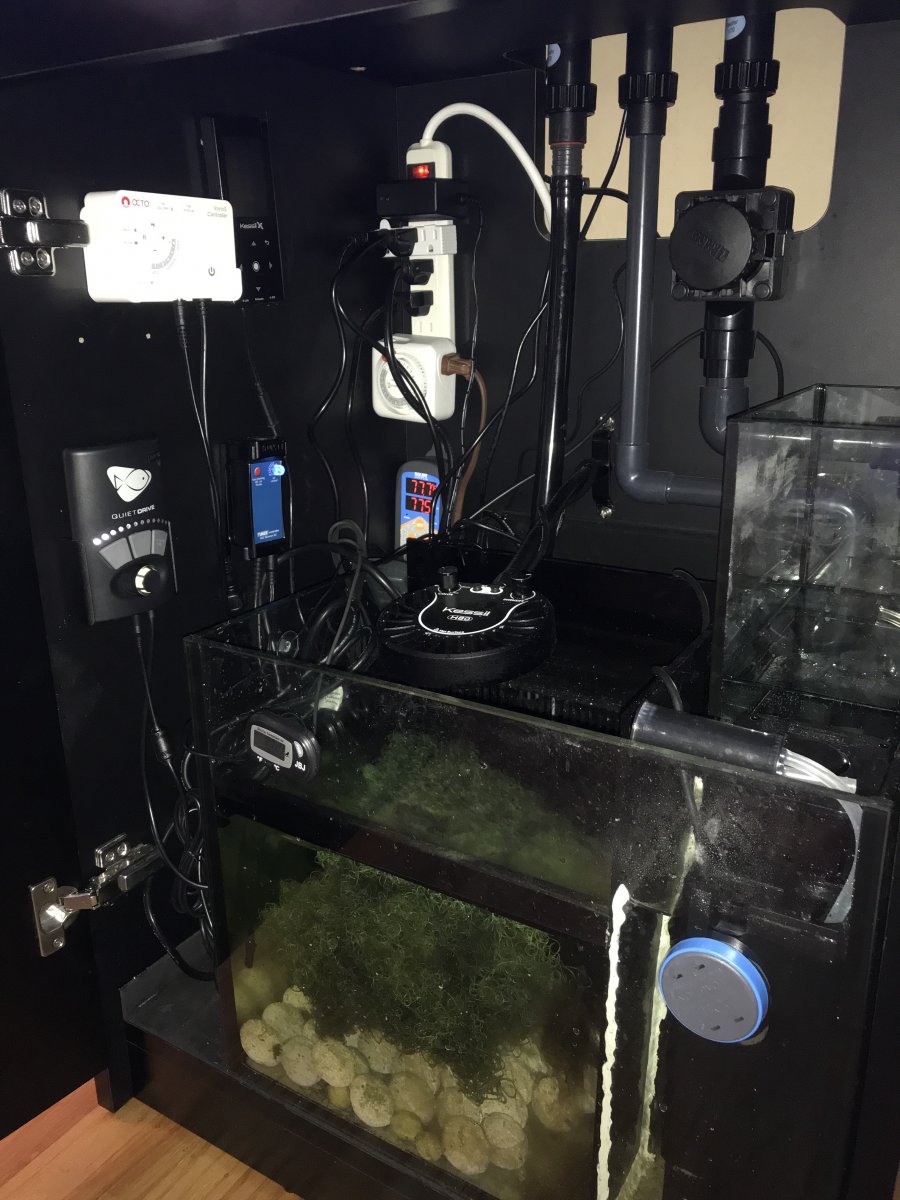 Got some new corals from my stepson for Christmas, here’s a current FTS, sump, and frag shot. 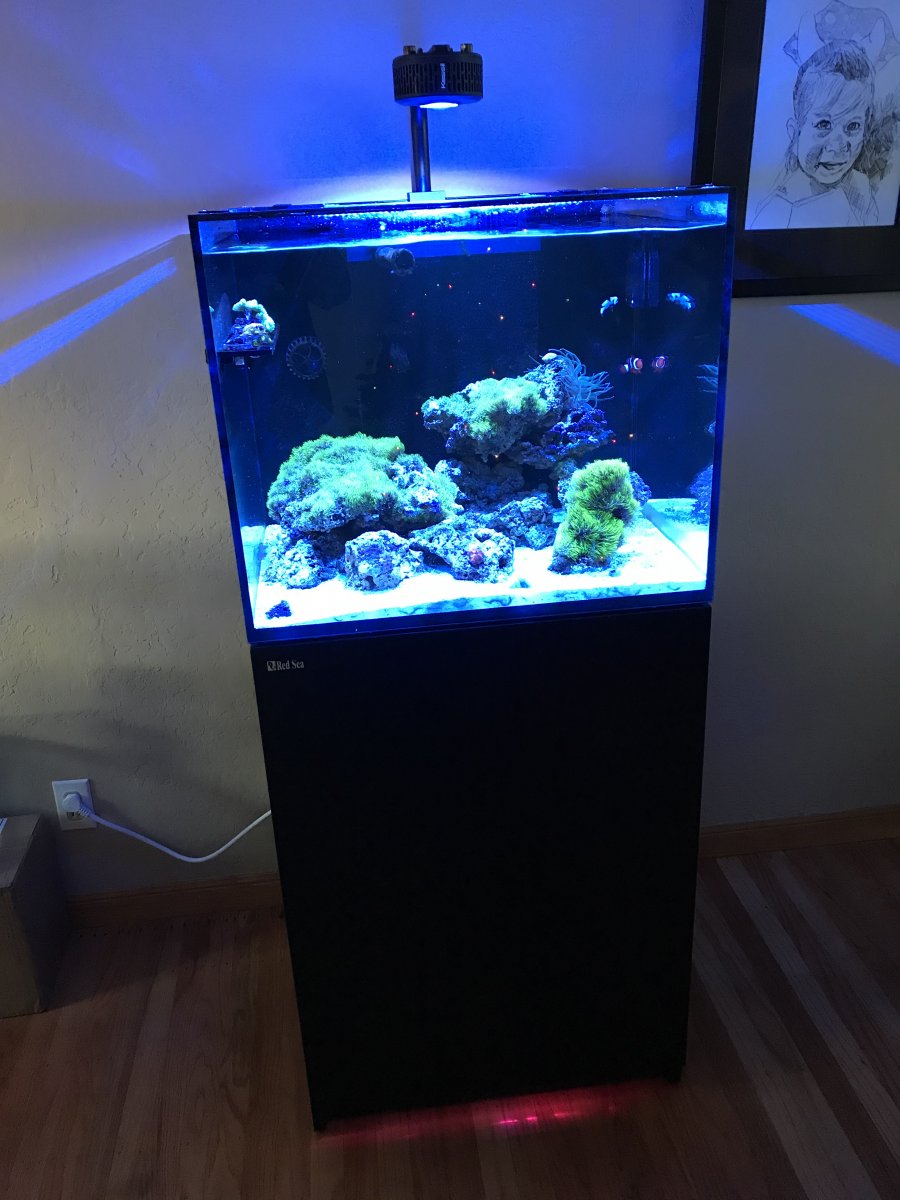 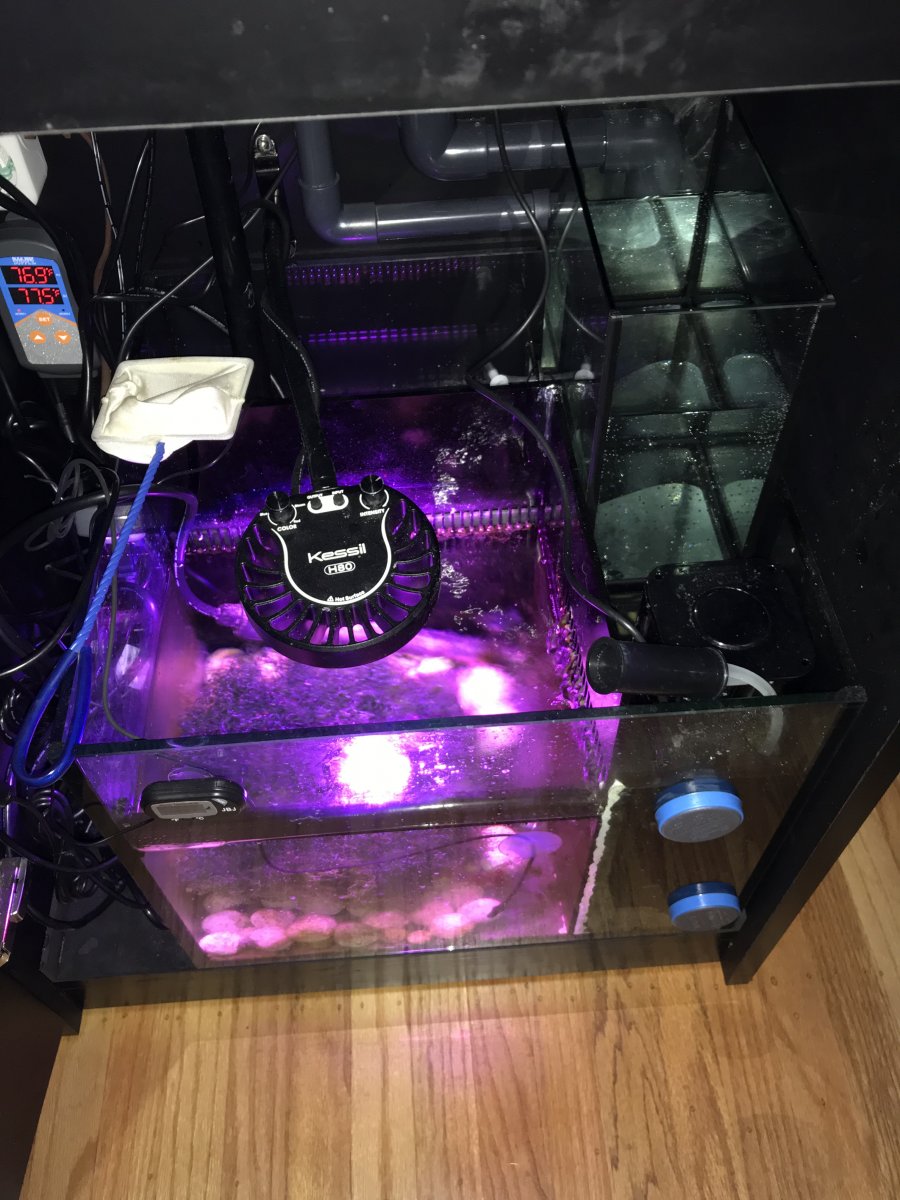 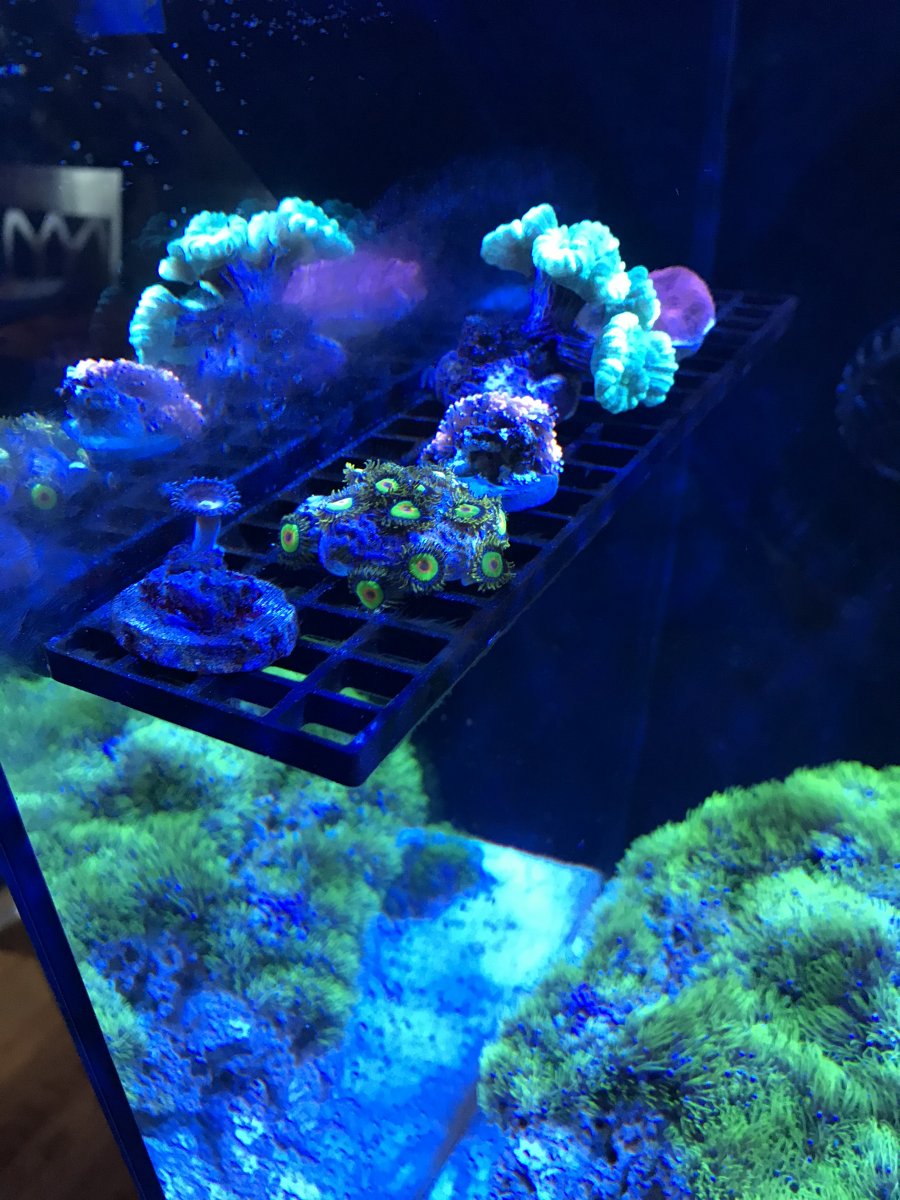