Thought I'd made a build thread to keep a record of the changes my tank goes through and to get feedback from other keepers!

I'm not testing my water too often yet but I intend next month to start doing water changes with Red Sea blue bucket and dosing all for reef to maintain and alk of 8 or 8.2.

Hopefully, I see some growth with the tank being more stable. Currently, my alk is 10 and I'm doing water changes with RS coral pro which has the alk of 14 and no dosing. Not ideal but hopefully by next month it should all be at the level I want 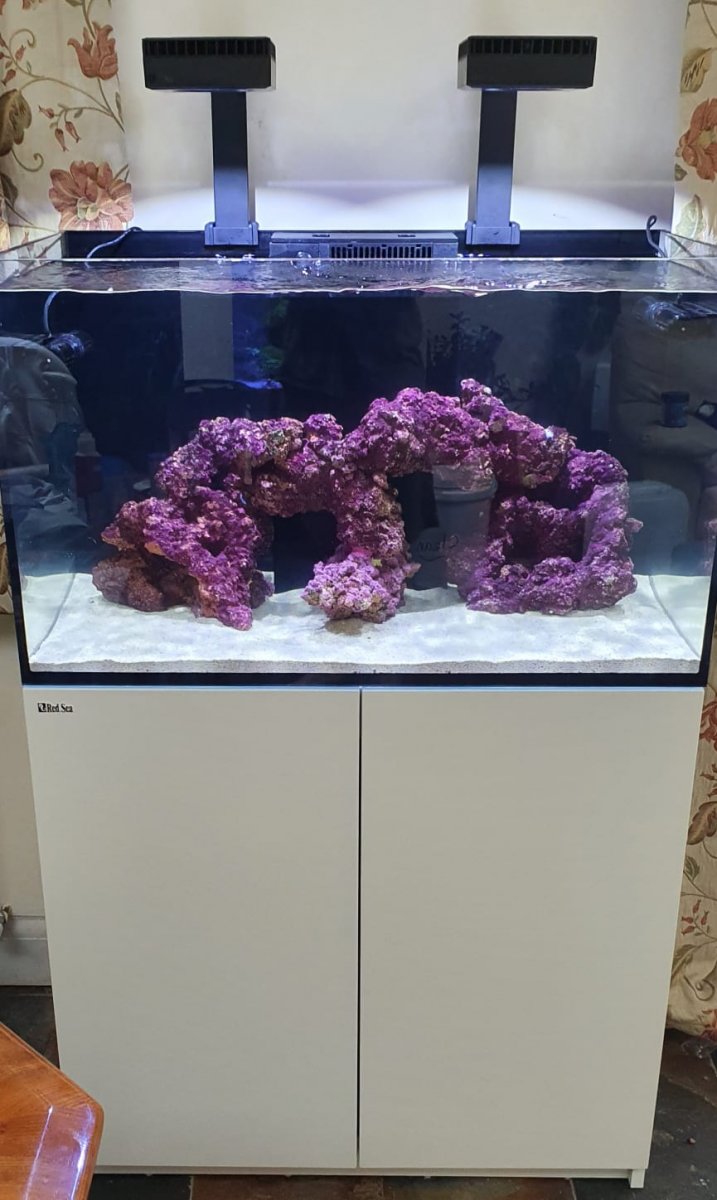 Thanks, it's my first attempt of doing a rockscape and I'm actually really happy with how it turned out. Loads of caves for fish, holes for frags and for corals to be mounted.

I'm new to sps and the cactus coral doesn't look great. I got myself a doser (jebao 3.4) but it doesn't really work so I'm going to go look for a more polished product


I've been assured the size of my tank and the size of the fish is more than fine. I have every intention of upgrading my tank in the future which is why I went for fish I know will grow. I'm super happy to hear concerns, criticisms or opinions but please be respectful
R

How thick of a sand bed is that?
OP

ramullins86 said:
How thick of a sand bed is that?
Click to expand...

I'd say it averages out to be around 2cm. It looks much higher in the pic i posted as i just raked the sand to get rid of bubbles

ThatsNoMoon said:
I'd say it averages out to be around 2cm. It looks much higher in the pic i posted as i just raked the sand to get rid of bubbles
Click to expand...

Ok. I was just asking because I actually just received a 250 and will be getting it set up later this week.
OP

ramullins86 said:
Ok. I was just asking because I actually just received a 250 and will be getting it set up later this week.
Click to expand...

Awesome! Good luck setting it up!! Take your time with the rockscape. It took me 2 or 3 days to get it how I liked it.

On the 25th of December of one my frogspawn heads shrivelled up after being perfectly fine for 6ish months. Within a day it fell off the skeleton and the next day the second head followed.

All my water parameters were fine except for phosphates which were apparently 0.25 (but zero the day before?) I decided to just invest in a Hanna checker so I can keep a close eye on those values since the test I have is as accurate as a tarot card reading given outside a McDonalds car park.


All my other LPS, SPS and Softies have been perfectly fine so I added phosphate remover to the water as it can't hurt but I'm not going crazy since there is no point killing the rest of the corals by messing with the parameters too quickly.

I got a colour correcting lense for Christmas from my partner. Allows me to get some nice shots of the corals. I'm going to post a few here and soon I will be doing a stock list and new pics of the tank.

I've had issues with bailout (caused by not changing my resin in my rodi unit) and dosing without having proper nutrient export.

I had some corals lost, new corals purchased and things moved around. In terms of fish, it's all the same as it was though the tangs have grown a lot faster than I expected. They haven't outgrown the tank yet and they all get along well so no need to panic-buy a new tank but it's certainly a plan for the near future

I hate to have frag racks in the display tank but the dang corals grow so fast with these ReefLed lights that i just can't help it.

Here are some pictures showing the new corals and tank layout.


(the picture with the acans has a red one at the bottom right of the picture that is totally closed up, it was just added so it was still acclimating when taken)