I have a 29 with a diy sump with a 2.5 gallon section for a fuge. I was running a 50w led grow light on it which was putting out 600 par at the water surface. Tank is stocked with two clowns, royal gramma, clown goby, and a fire fish. I not changed the water in 8 months and I have to dose nitrate and phosphate. I mainly feed frozen food. I had removed my skimmer cup around thanksgiving because my nutrients were dropping again. I swapped out the led for an old small t5 fixture to try and reduce the amount the macro was growing. With a 20 display fuge you will need a lot of food going into that tank to keep any nutrients in the water. I got dinos twice because my nutrients bottomed out.

Vwluv10338 said:
I have a 29 with a diy sump with a 2.5 gallon section for a fuge. I was running a 50w led grow light on it which was putting out 600 par at the water surface. Tank is stocked with two clowns, royal gramma, clown goby, and a fire fish. I not changed the water in 8 months and I have to dose nitrate and phosphate. I mainly feed frozen food. I had removed my skimmer cup around thanksgiving because my nutrients were dropping again. I swapped out the led for an old small t5 fixture to try and reduce the amount the macro was growing. With a 20 display fuge you will need a lot of food going into that tank to keep any nutrients in the water. I got dinos twice because my nutrients bottomed out.
Click to expand...

Have to see if I can update the title, keep meaning to stop posting here and start a build thread but a few people were already following this one. Just doing the 30 by itself, running 2 ac110 fuges and an ac50 for filtration. Also decided to stick with macroalgae, yeah have a feeling I'm gonna have to overstock this tank like my 1st sw macro tank. Only been running just over 2 weeks with life rock and biospora, planning to ghost feed it through winter before lights, macro and fish go in.
OP
J

Only idea I have come up with for the bioload is 6-7 juvenile ocellaris clownfish but I think it would be a bit of a gamble. If I could manage to keep them from killing each other I wouldn't have any issues of running out of nutrients. Probably have to change water to make up for the heavier feeding as well.

Might even be enough to grow graciliara in the rocks, chaeto in fuges and back glass, but haven't decided how I want to put it on the glass. Could just glue it to magnets or go all out and get black plastic mesh, like fw planted java moss, and zip ties and go for a chaeto carpet. Not sure how well it would work though, so I'll leave that for a someday project.

Really don't know if this stocking would work long term but sounds better than trying to care for 4-6 different fish. Plus omnivores are much easier to feed, can offer more food variety. Will try to see if I can come up with any other ideas but so far I haven't come up with much. Imagine I will need 4-6 3" fish and I would rather change water than dose nutrients.

Edit: Water volume should be just over 29 gallons once the other fuge is filled and ac30 swapped for the ac50.
Last edited: Jan 3, 2021
OP
J

Simpler option on the fuge lighting would be to put them side by side, with one 24" fluval plant 3.0 over both. Just slid the ac30 down to the end for now, makes 2 fuges simpler. Maybe overkill on lighting but should grow chaeto no problem, think I'll keep cutting it up into small pieces to keep it moving.

For battery backup to keep flow going I think I will pick up a power inverter with auto switch and battery charger/battery and run the 3 filters off of that. Should be enough flow but could always run 2 batteries and add the wave pumps on as well. Will worry about that in the summer or fall and just ghost feed thru winter.
Last edited: Jan 3, 2021

Yeah I'm stumped at the moment, so far the only fish that really seem to interest me are ocellaris clownish and coral beauty angelfish. Not sure the tank is big enough for a cb and I doubt 6-7 clowns would work for long in a 30g macro tank.
OP
J

2nd fuge is up and running now. Don’t think I’ll have any issues with flow once I get the ac50. Could probably even downsize these wave pumps possibly. Pushing somewhere around 1200gph with everything, hard to say what the ac110s are pushing for a flow rate now.
OP
J

Actually considering them now, not sure how this stocking would turn out. Trying to consider some wild fish, hard to pass up the Midas Blenny. Does seem like a small tank for a 6" fish though.

Picked up a few hermit crabs and nassarius snails, wasn't a lot in stock. Also grabbed a pair of ocellaris clownfish, was gonna start with pj cardinals but they just came in and still looked stressed. Almost grabbed a tiny ywg that was hiding in a corner but I haven't seeded the tank with pods and I don't have a cover on the tank yet. lfs said to scratch the midas blenny, he's also trying to talk me into going with corals instead of macroalgae. Which is what I will spend the next week debating, a lightly stocked tank with corals may be simpler to maintain than an overstocked tank with macroalgae.
OP
J

I see quite a few people with midas blennies on the forum in 30 gallon tanks without issues. Considering going back to the neon green star polyps and just doing the clowns and midas blenny. Think that would be a medium bioload after inverts but I have the fuges to feed as well as the ac50 to get, could always drop some biopellets in there if need be.

Thinking I will make the ac50 into a cryptic zone once I pick it up. Rinsing sponges will be a pain once I add pods and it seems like a more natural option. I was shooting for a strong microfauna population, minus the dsb now anyways. The pair of clowns seem to be settling in well.
OP
J

Not gonna lie, corals sound terrifying to me, too much that could go wrong, and honestly too much money for my budget. Gonna stick with what I know, will have to figure out a few tank mates for the clowns for the bioload. Been wanting to do a tank of graciliara for a while, plenty of them to chose from.

May have to break from captive bred and omnivores, also debating between adding 4 smaller fish or 2 bigger medium sized fish. Not sure if I will still do the midas blenny, going back and forth on that one. Almost wonder if I may need a 4th fish to balance out the aggression with the midas.

Only thing that came to mind so far was a coral beauty but I would assume there would be territory and food issues with them both eating algae, not to mention the tank is a bit small for the cb and midas honestly. I do worry a bit about adding the blenny, which will be twice the size of the clowns.

Other small fish I am slightly interested in, no ywg since I cut the sand down. Tank will get a cover either way, don't want to risk it.

I would really say all the smaller ones are slight maybes, I figure the more actual fish the more complicated it will be. Also have to plan ahead for ones that can handle the clowns at maturity, ie keep them in line and not get pushed around.

Mixing omnivores and carnivores also seems to make feeding complicated to me, much easier if possible, to do all omnivores so I don't have to do special feedings only for certain fish. But I feel finding enough omnivores that will fit in this tank with the clowns may be a bit of a challenge. 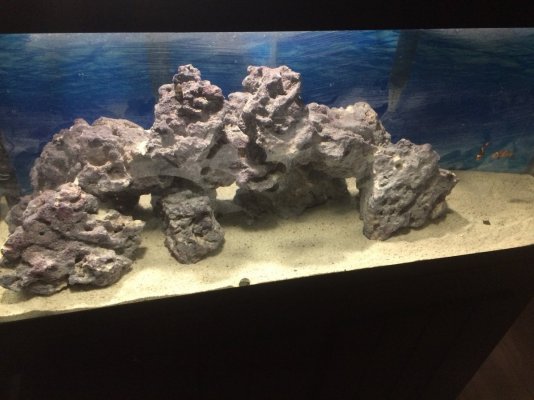 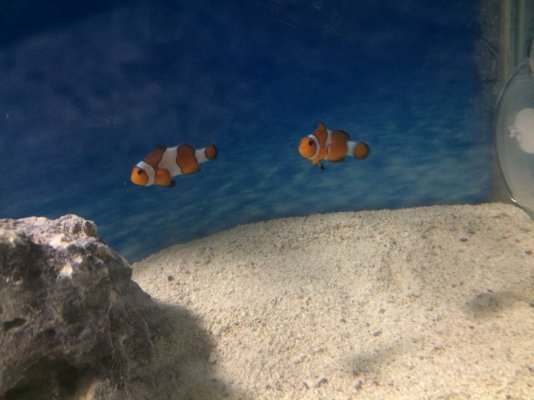 Not sure I will go this route since it seems a bit unbalanced but if pj cardinals like to hide in plants maybe I should just drop 4 pjs in there and feed frozen daily with a mix of flakes before and after.

Still have to get lights, macros, copepods and phyto but that should give me more than enough of a bioload to sustain the macros. Hard to say since I see a lot of reports say pjs are good in groups and other suggest single only. Plan to harvest chaeto and let the various graciliara in the rocks grow until it gets to be too much of a jungle.
OP
J

Going with the 4 PJ's so stocking is settled.