I realized I have had my reef for a full year from photos that popped up as “memories” from the date a year ago. I didn’t make a build thread then because I didn’t really feel like I was building anything and at that point I was still just skulking around reading posts to figure out how to keep everything alive.

I plan to use this as sort of a tank diary as I have seen others do and it may end up chronic along an upgrade or expansion to another tank in the near future.

i had kept freshwater fish for probably most of the last twenty years since I was a kid and always thought saltwater was too difficult and expensive, maybe was something I would try someday after we settled in a house I knew we weren’t leaving for a very long time. I had been moving at least every 1-3 years for the prior 15ish years for school and training. We were about to move to what is planned to be our permanent house and I saw an add for a used AIO tank with a light. I had been looking through how to keep a reef tank and figuring out how to get started with a plan to set up a tank once we moved. This seemed like the cheapest way to get jump started equipment wise as it would come with a bunch of used gear. As I was talking to the seller he offered a different tank that was a little more worn but even cheaper and would come as a complete set up, I chose that thinking I would use it to get started and would have everything. I didn’t realize this when I started agreeing to buy but I ended up picking up a fully set up reef tank that included 3 clowns, 2 urchins, a snail and an assortment of beginner corals. Everything but one of the urchins survived the 45 minute drive back to my place and I got to explain to my wife that while I had planned to get a tank to set up after we moved in a month or so, I actually had to set it up right now to keep everything alive.

Below are pics of when it first came home. If anyone actually reads this thanks to R2R for helping me make it to a year! Will post more with current pics. 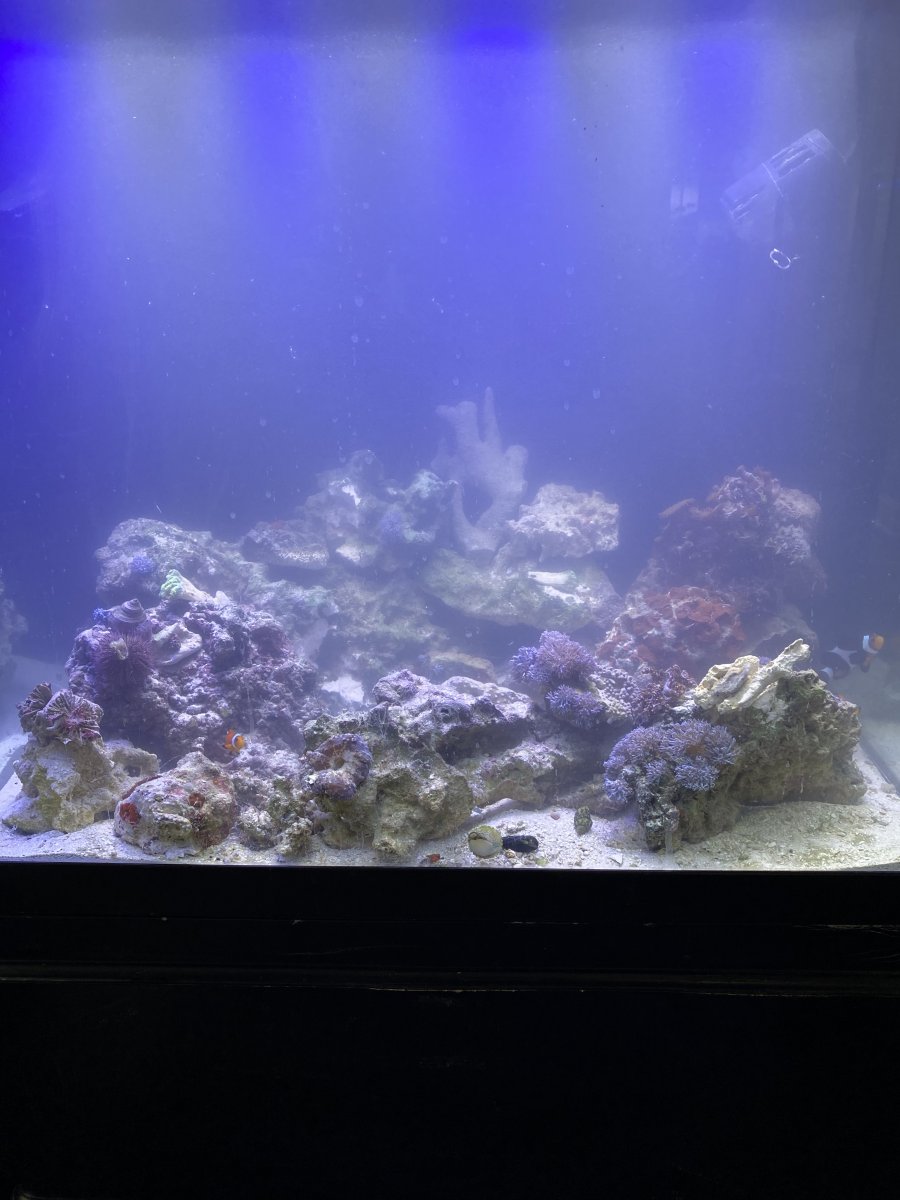 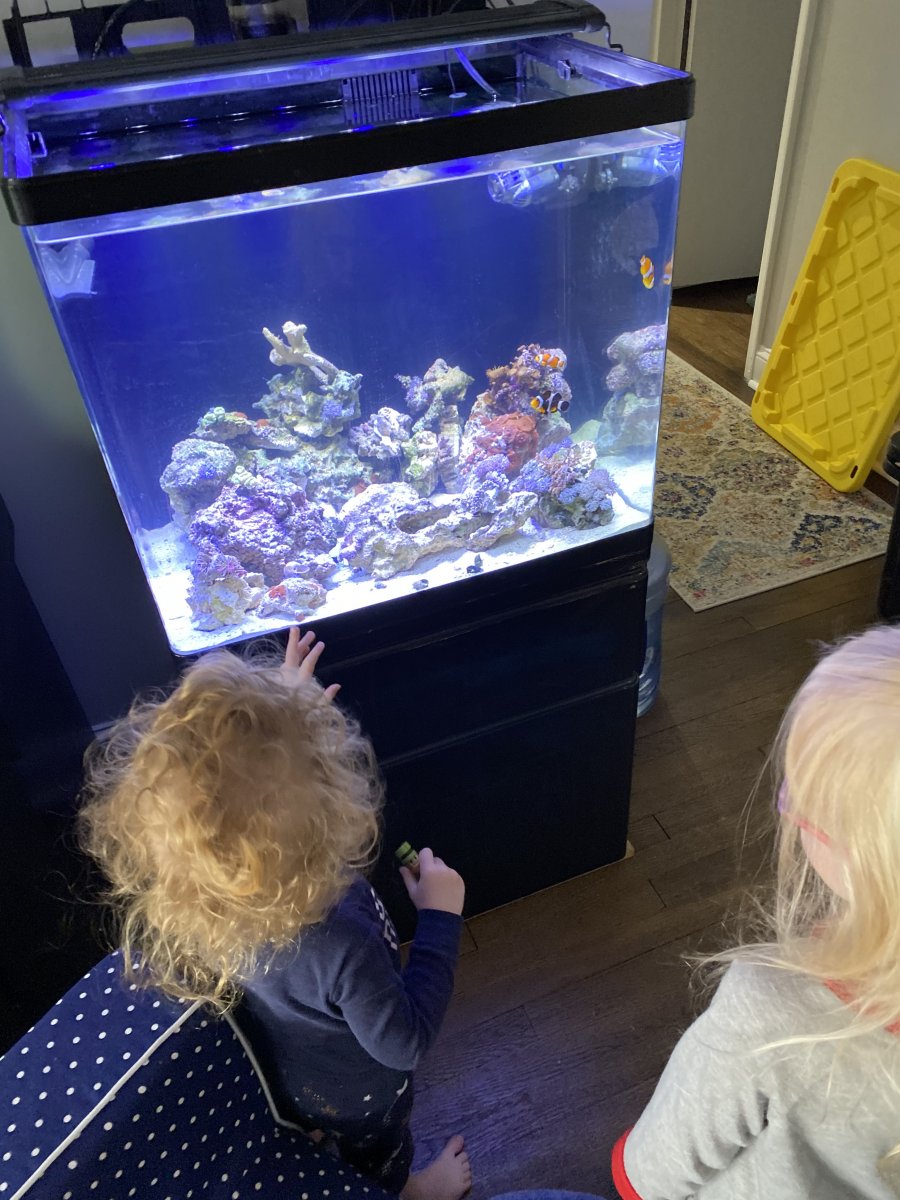 and after about 2 weeks of it settling in: 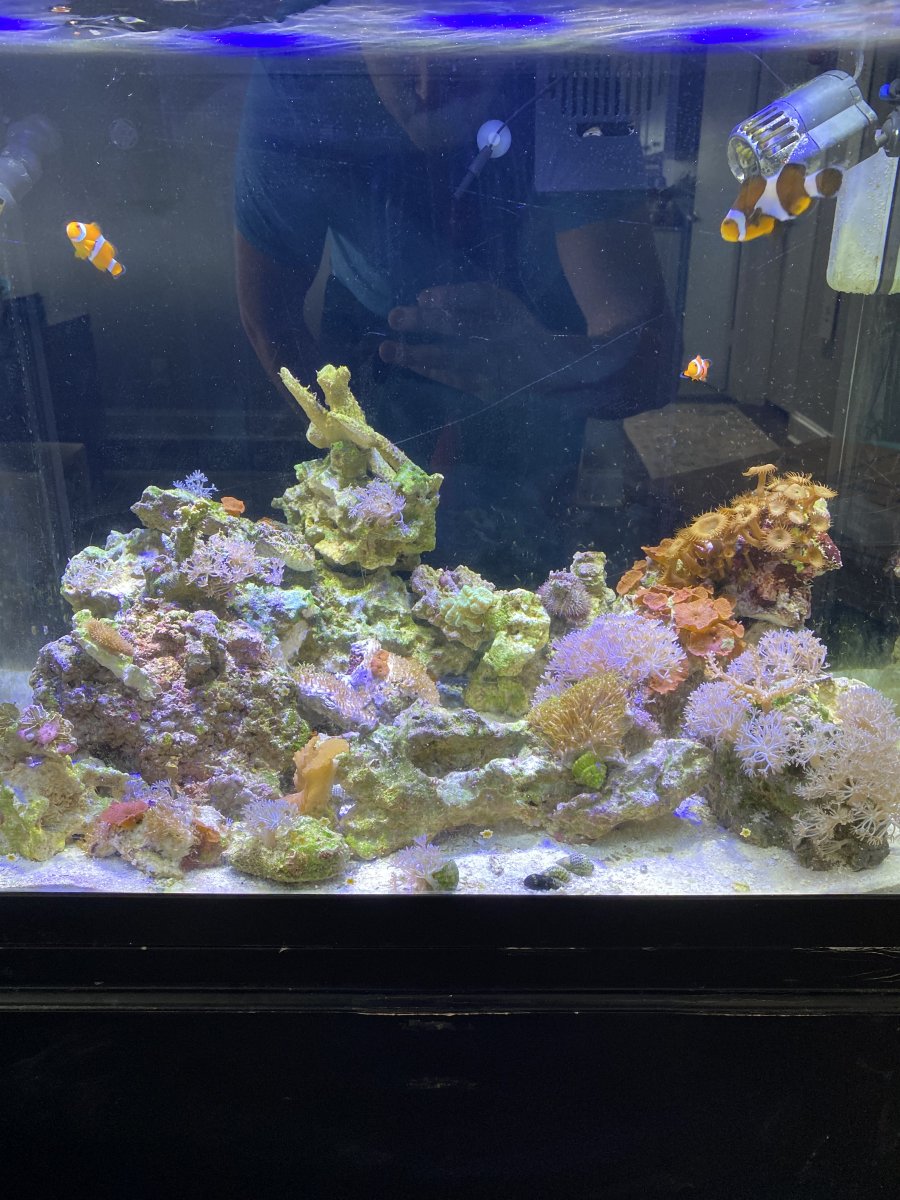 About a month after getting the tank we moved to our planned forever house where I had thought I would start the set up in the first place. Having just done this, that move was a breeze. Over the year I made a few changes and additions. I lost the biggest clown to the powerhead running in reverse so that was swapped out and upgraded to a Sicce voyager nano. The return pump gave out and I picked up an upgrade from fish tanks direct that is intended to run as a solo pump also manufactured by Sicce. I added a prism ATO ordered from BRS that was a game changer. A heater malfunctioned to put temps crazy high and killed off the GSP. I had a run of Cyano that I think is finally under control.

I added a Duncan, Hollywood stunner chalice, Rasta, Orange bam bam and radioactive dragon eye zoas. Also got a six line wrasse and royal gramma. The Duncan and the fish were bargains at Petco and the rest of the coral came from a member selling in the classifieds on R2R.

I found a reef shop near work so I dropped in to check it out and ended up getting a few blue leg hermits, some bumble bee snails and nasaurus snails. The rock that I have I think at least a chunk of it started as real live rock as it came with 2-3 types of sponges, bristle worms, and a few snail like things I haven’t been able to identify yet, the bumble bees were to sort the vermatids it also came with and have done a great job.

Pic after adding the Duncan, rocks moved when tank moved. This is before the heater disaster about 4 months after I got the tank. 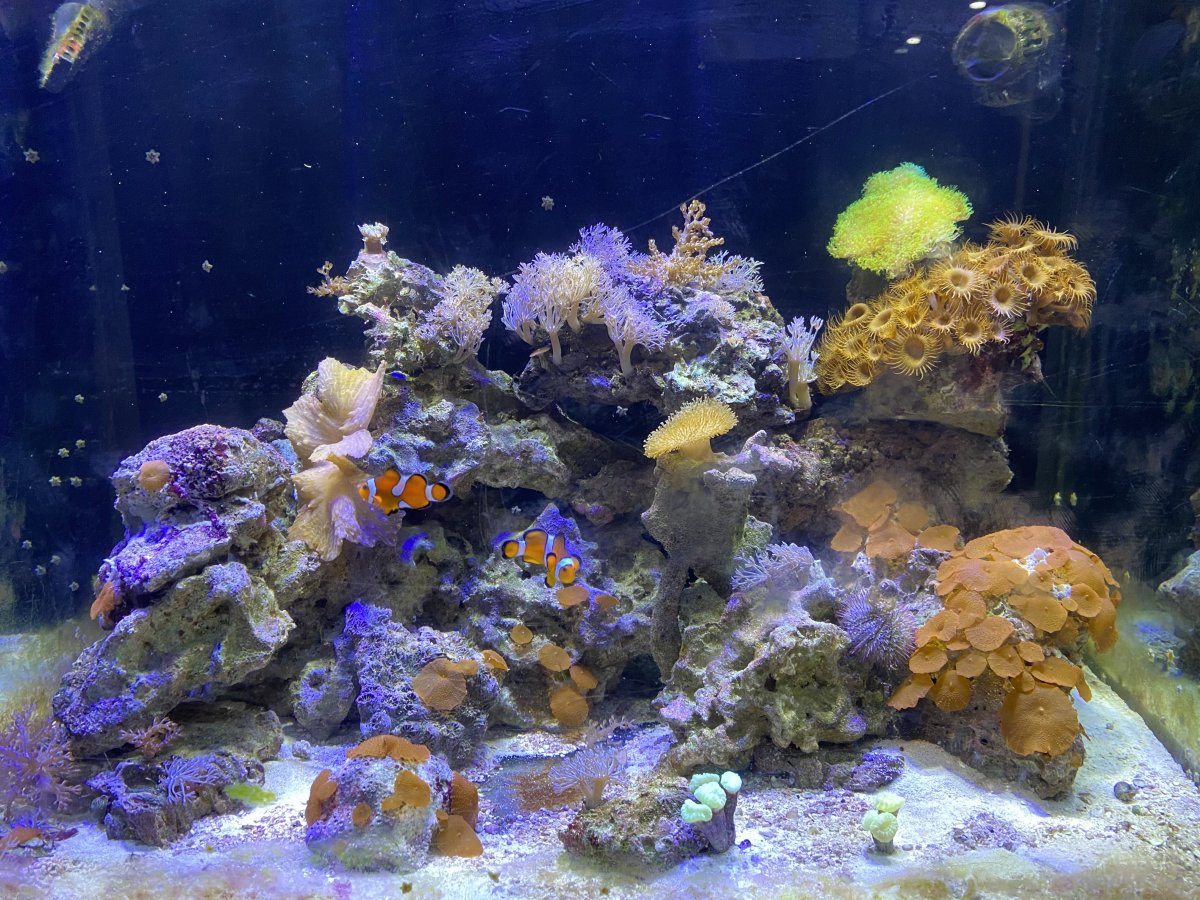 Mushrooms recovering from bleaching out w the heat, I had posted this before bc I thought it was cool. Everything that went clear recovered now. 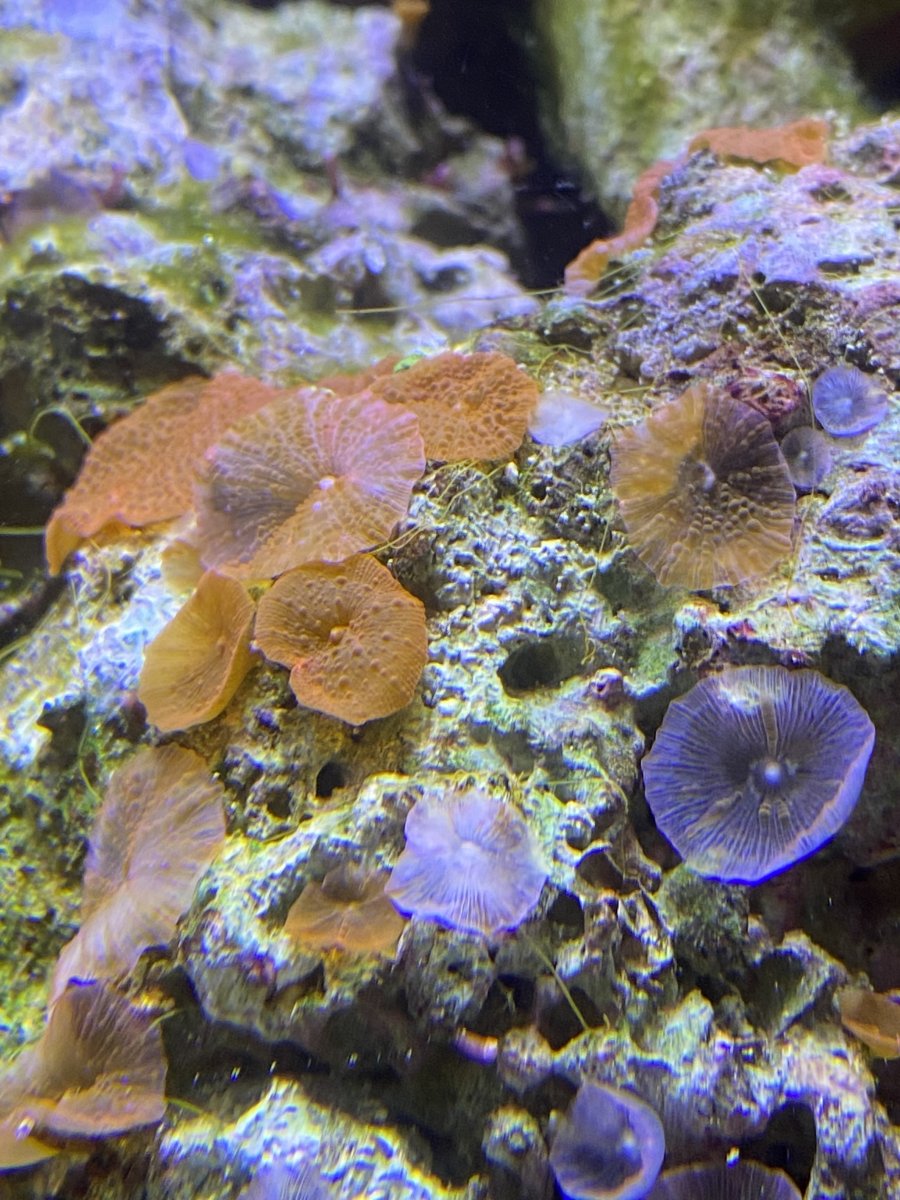 The chalice and bam bams showing growth, about double in size from when I got them. 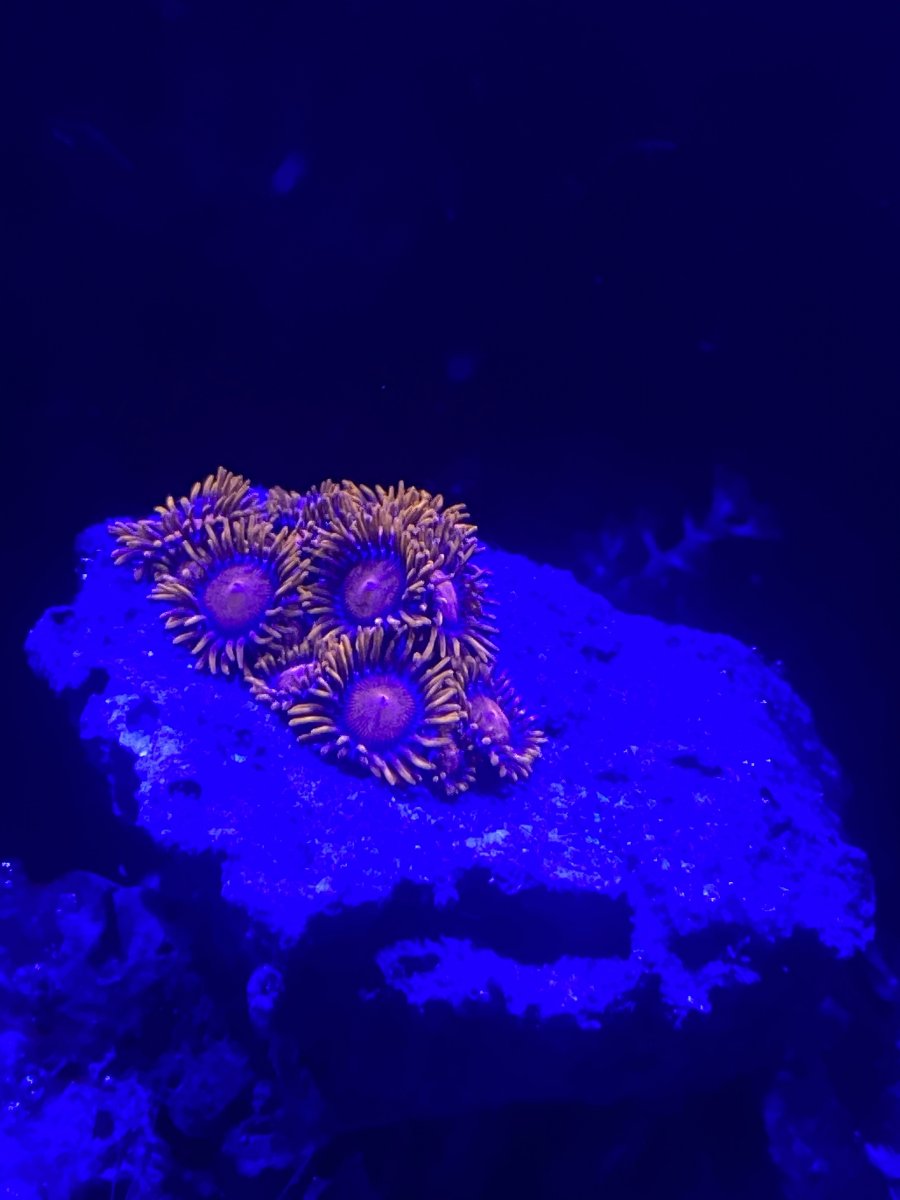 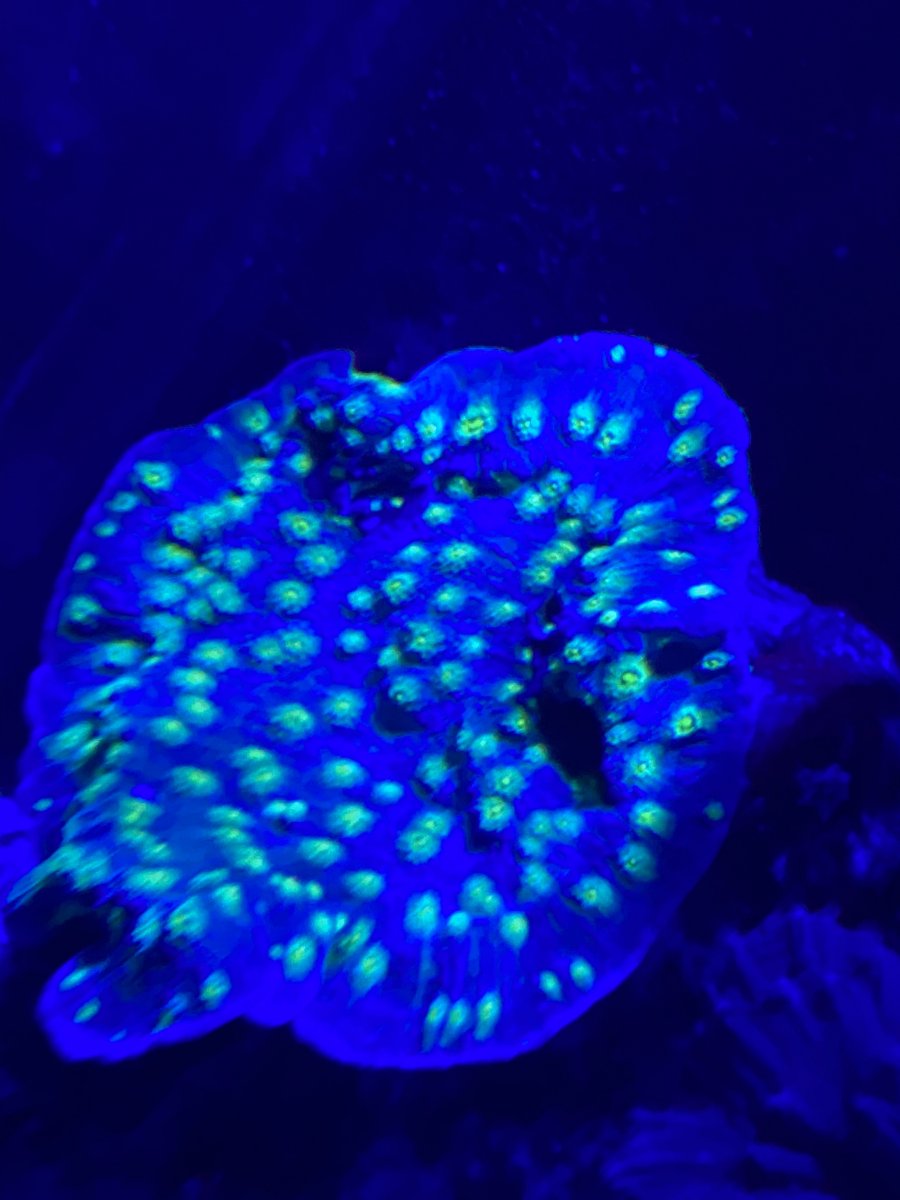 Water change day so everything is looking sulky. Got a new light Nicrew Hyperreef 150 in the last week. Have it on about 40% power mix white and blue. Slowly taking out the sand and plan to swap to a larger grain bc it flies all over if you even look at it.

The system is really coming along nicely.

Swapped the sand for caribsea special grade a few weeks ago and have been happy with the decrease in sandstorms whenever anything moves. Got a bunch of of frags from @Pong huang , a relatively local reefer who listed through classifieds. Decided to take a shot at moving in to some more advanced corals with a few theoretically easier SPS as well as some other stuff that just seemed cool.

everything but the monti caps seems to be settling in nicely, they did not seem to appreciate the transition and are showing some bleaching, hopefully they pull through after some adjustment period.

I added 2 new chunks of rock to allow some space for the new additions and to start getting more rock ready for an eventual upgrade to a bigger tank sometime in the next few months. With the mini re scape I moved my Hollywood stunner more to the front so it’s less hidden.

so far the new mushrooms and the digi are probably my favorites.

The new corals all seem to be showing at least a bit of growth except for the monti caps. The purple I’m pretty sure is a goner and the lime lost a bunch of tissue but has a section that seems to be hanging in. I think they were just too freshly snapped off and stressed too much traveling too soon. Extra pleasant surprise the forest fire digi seems to be doing great, I was worried buying it but it definitely shows lots of little growth tips and in one side seems to be encrusting down as well off the plug.

I have been trying to watch my pH KH and Ca pretty close because I had never dosed or anything before and kind of just let things be when I had pretty much all soft coral.

I also checked out a saltwater / reef shop near by work recently and today ended up getting a yellow watchman goby and a green clown goby. Both seem fine and no signs of aggression from the existing fish. Store was Jawz aquarium in Elmsford NY. Will def go back. 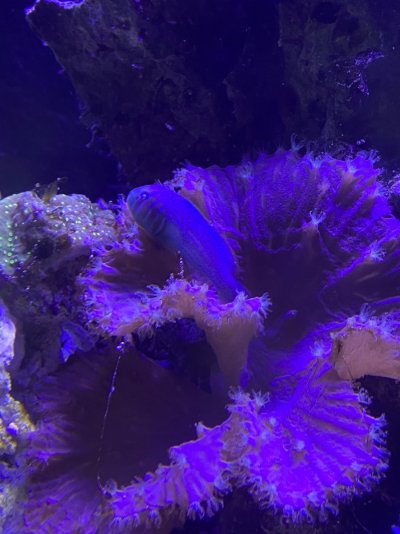 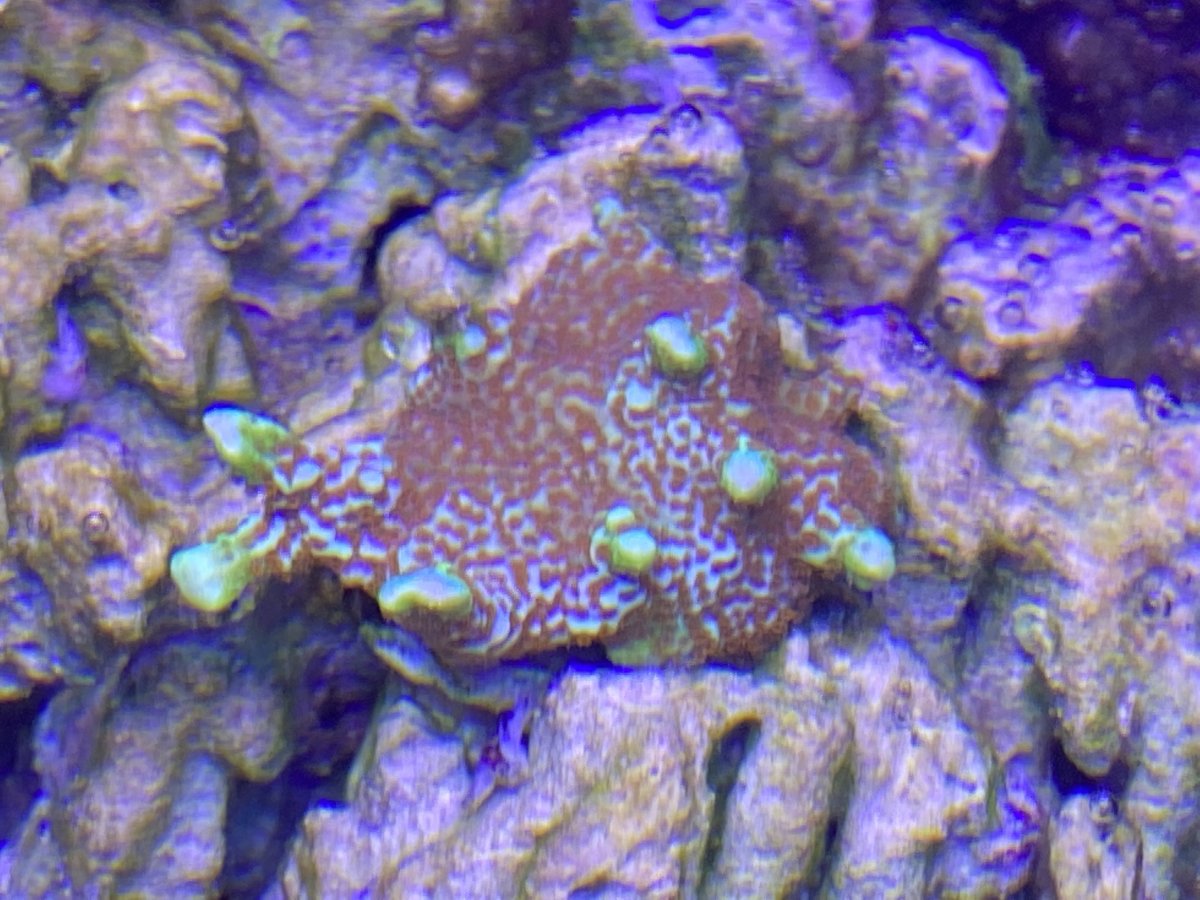 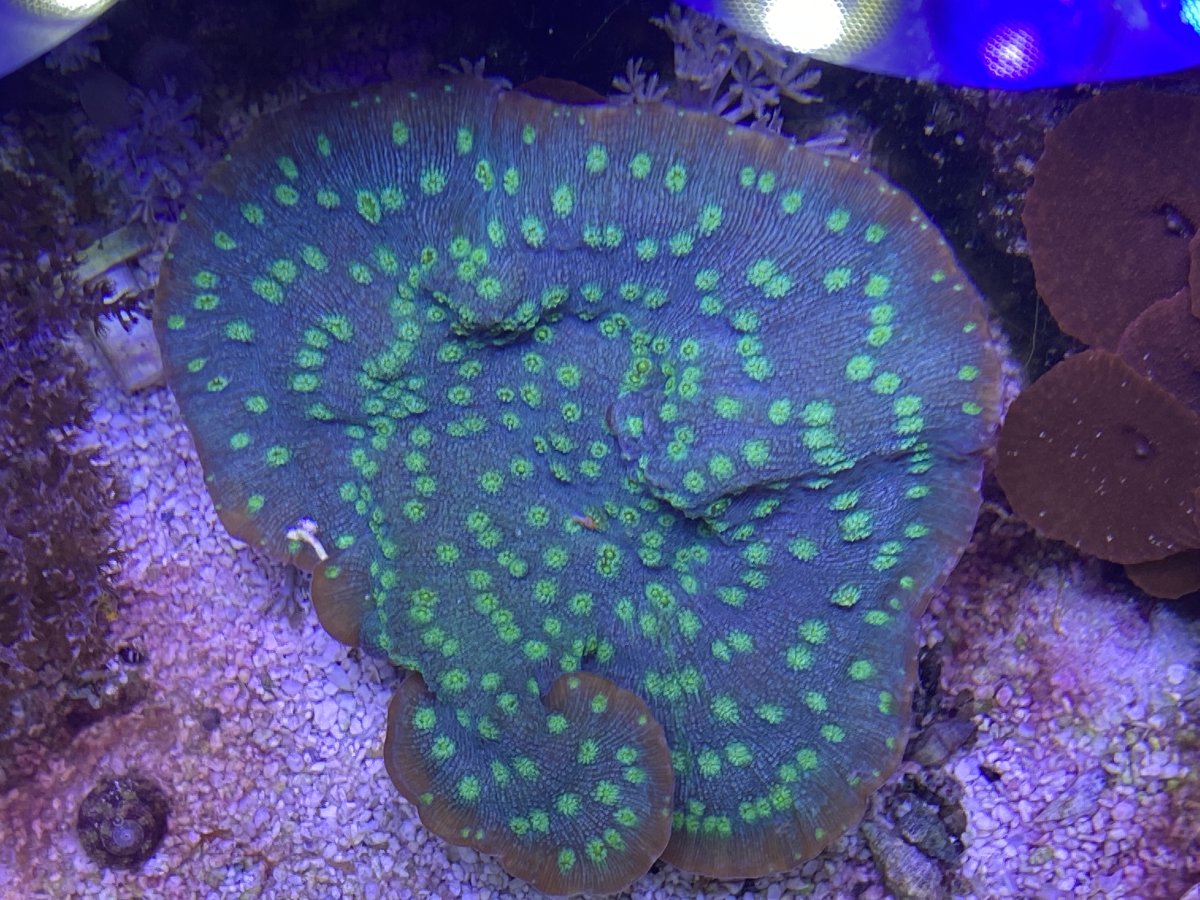 Both new fish still doing well, the clown goby is awesome and quickly became a favorite. The yellow watchman is neat when out but almost never seen. Testing a bunch more and dosing seems to be keeping things happy. Seeing really solid growth on my stony corals- Hollywood stunner and the newer addition of the forest fire digi in the pics. The digi came to me with none of the green and all the “digits” are new since it’s been in my tank. I added a dosing pump as we are planning some trips this summer and it feels like something asking to be automated. Just went for a Jebao 4 head WiFi as I wasn’t looking to break the bank. I’m starting to think of this tank (first saltwater and first reef) as kind of like a first car. It shouldn’t be anything flashy in case you crash but shouldn’t be total trash. Pump was pretty easy to set up but I watered my Ca and Alk to half strength to give it a bigger margin for error just in case.

Things going well with the dosing pump but went away for the weekend and I think the tank overheated because we let the AC go in to energy save mode. Came back and the house was like 77, gramma dead, gobies MIA but still holding out hope they are just in hiding. Before leaving all had been active and eating well, the gramma a little chunky if anything. Corals don’t seem to have minded and continue to grow. I think the lime monti cap is out of the woods and has an expanding area of healthy tissue. Bird nest bleached out randomly one day before we left. Have saltwater mixing now for a WC to wash out any ammonia etc from the dead fish. Plan to start dosing Mg / figure out how much Mg to dose as a next step. Think a jump up in tank size is coming soon whether it’s to a 40 breeder w a sump I found on the curb or to converting a FW 75 in the living room and shuffling around. Either way surprise reef rocks and inhabitants will make up the new setup, don’t think I’m up to maintaining 2 sets of water parameters. Attaching my testing and interventions recently. 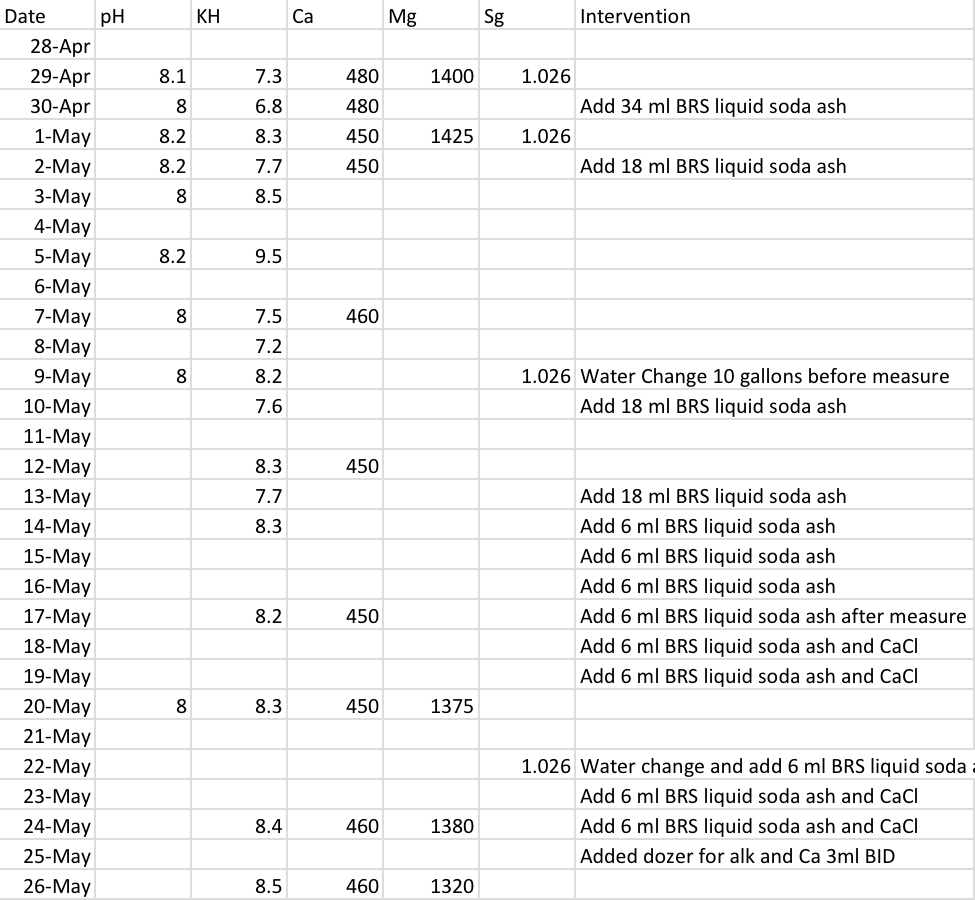