The 125gal Experiment in Saltwater

It’s been a long time coming, but I’m finally building my saltwater tank! I’ve had freshwater my whole life, from guppies to cichlids, glow fish to a largemouth bass that we had in a 75gal tank in our garage that we fed dog food kibble to! (Was later released at a healthy 8lbs into our pond).

Few years ago we moved and I had to give up my cichlid tank. Decided this time around I would take the plunge, and go as slow as possible learning as much as possible about saltwater. Not long after this decision, talking with a coworker about it, he gifted me a 125gal tank and stand! He had turtles in it before, but was ready to get it out of his house. 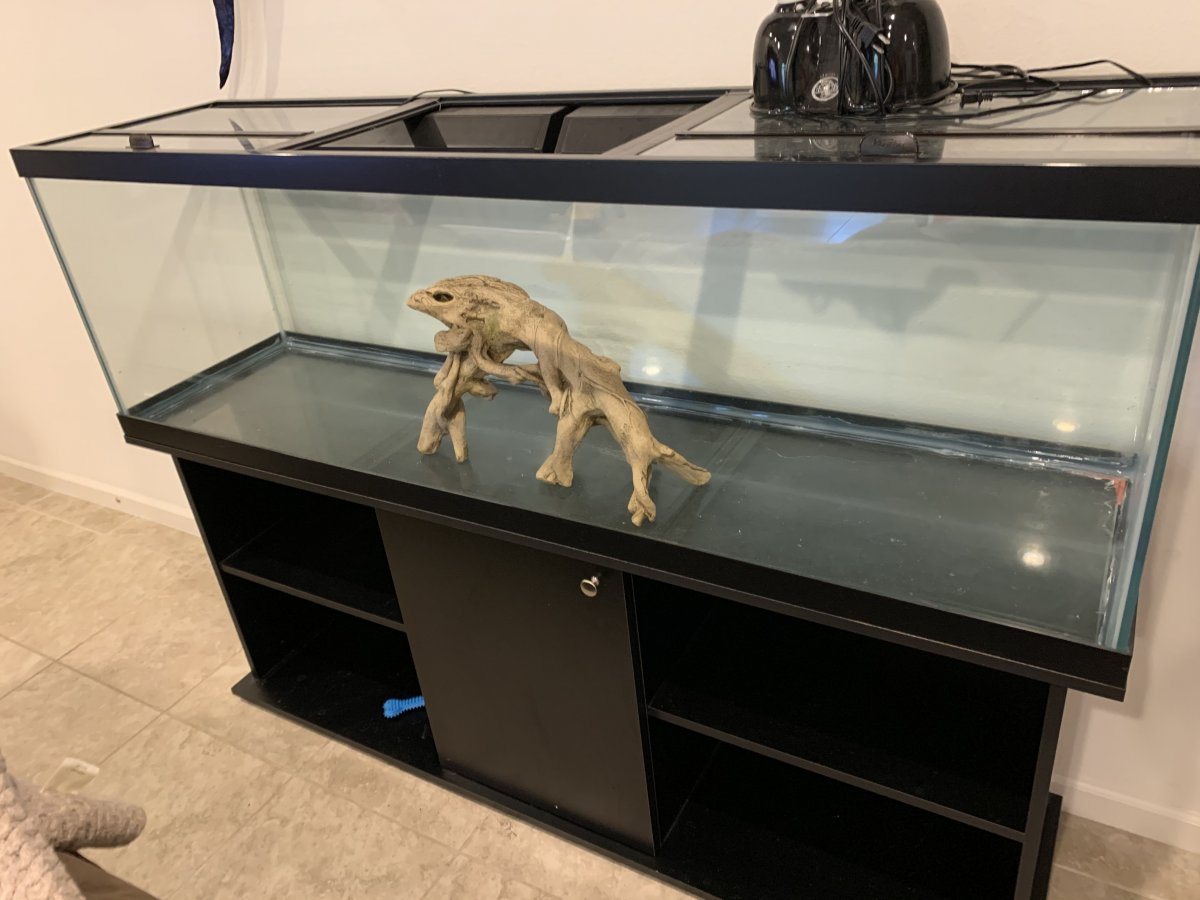 I briefly thought about making it a reptile tank (hence the contents) as I wasn’t really ready to start the tank yet, but decided against it. So there it sat in my living room, staring me down for the better part of a year. Decided I didn’t want to drill the back, and since I do have a growing family that travels for vacation often, I was leery of an overflow to sump, being left unattended aside from someone coming over to feed once a day. So a few months later when this FX6 came up for sale for $20, I grabbed it. 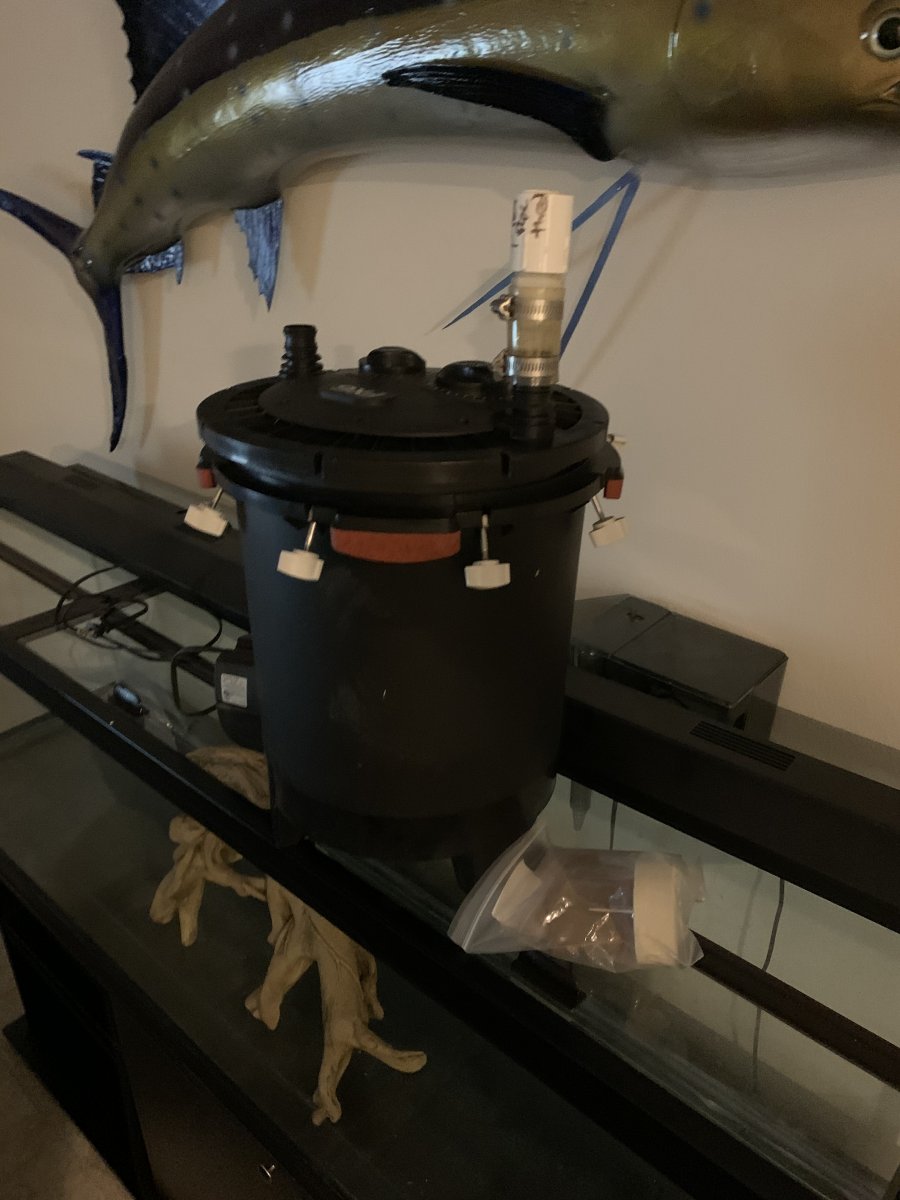 Replaced all the gaskets, tested it out...all good.
So that’s two pieces to the puzzle. Now...I started questioning the tank. After cleaning well, I saw where there was a had water line etched into the tank glass halfway up from where previous owner kept waterline for his turtles. No amount of scrubbing, elbow grease, or product was removing it. It’s one thing to go sumpless for a free tank, but I’m not going to stare at my beautiful fish and corals through etched glass. Then I read a review somewhere (probably on here!) about Cerium Oxide. 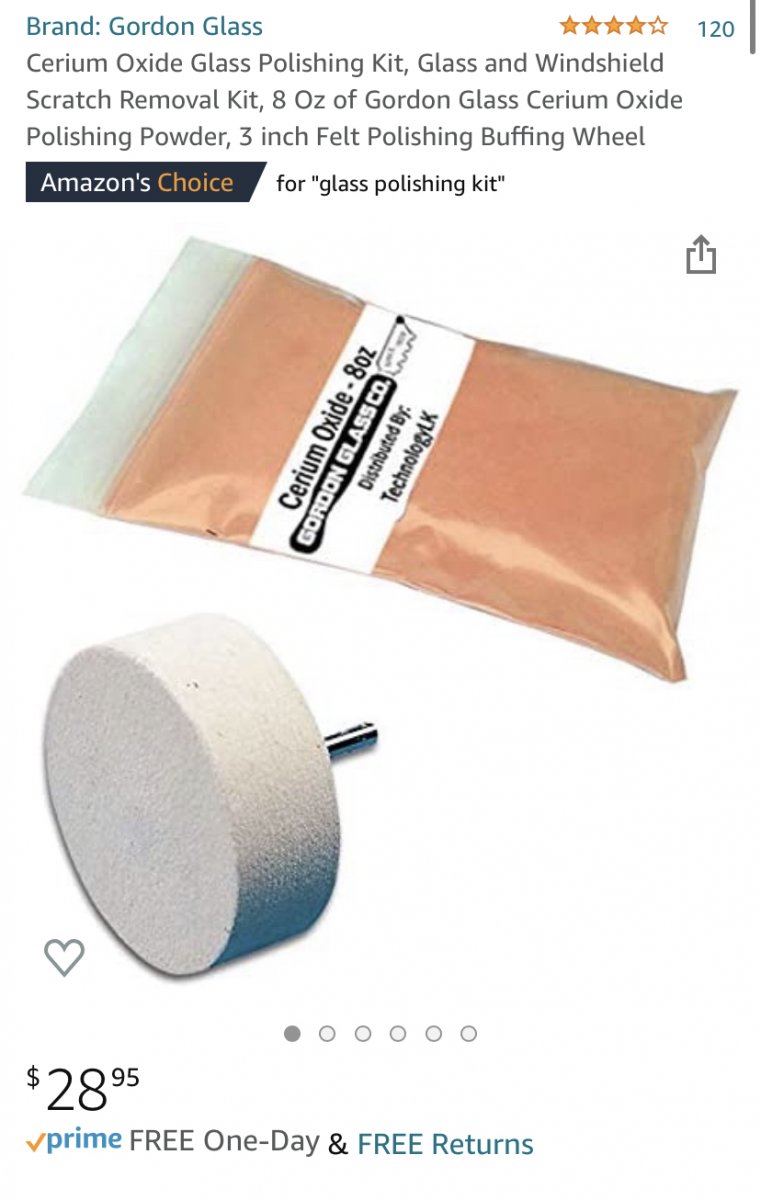 I chucked this into my drill, and in a couple hours (and 4 dead batteries later...should have used a corded drill) I was etch free!!! So first hurdle successful! Albeit sore arms.

Now, I’ve started saving some change, so I figure I’ll buy some dead live rock and start playing around with landscaping. Then comes COVID. No rock to be found at any nearby stores. I guess everyone decided to build tanks, stores can’t replenish fast enough, and everything online was either not in stock, too expensive, or shipping costs made it unfeasible. So...back to diy. I made my own rock. This I didn’t document well, but I found several different versions/recipes online and went to town. Sand, Portland cement, oyster grit/shell, and several sizes of salt rocks and salt water softener pellets, mixed into containers of sand forms, and this was the result. 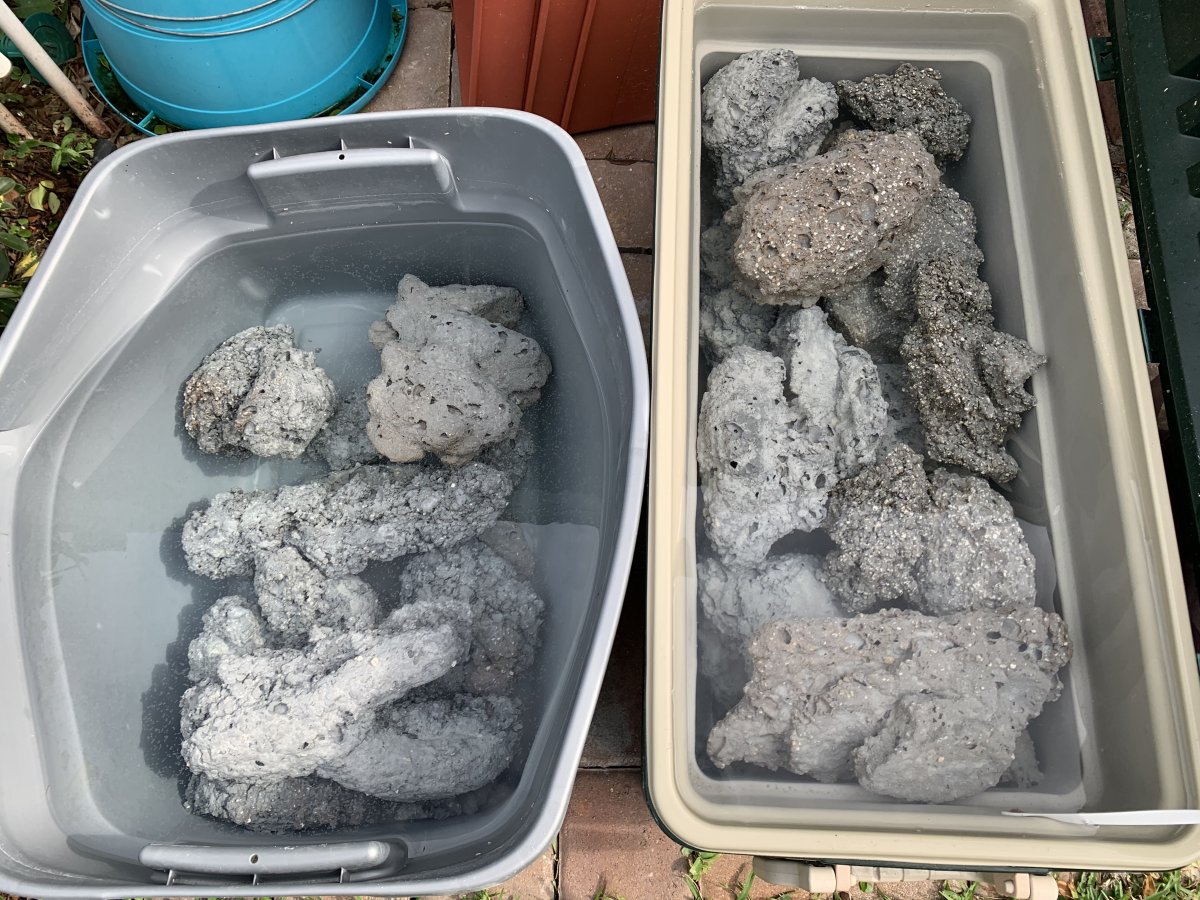 Here they sat and cured for the past year. With COVID and as busy as I was at work (a hospital OR), it was the perfect time to be patient. I did regular water changes in the containers the first couple months, testing pH until I finally started seeing it drop, then let Mother Nature’s rain do it for me. Last month I filled the tanks, tested the water, and after a week had zero change in pH. Played around with some landscapes, and really it looks pretty good! Not as pretty as the purple rock, or some of the really nice rock BRS sells, but for less than $60 in materials and a year of patience, I can’t complain about something that will be covered in coralline and corals one day anyway. 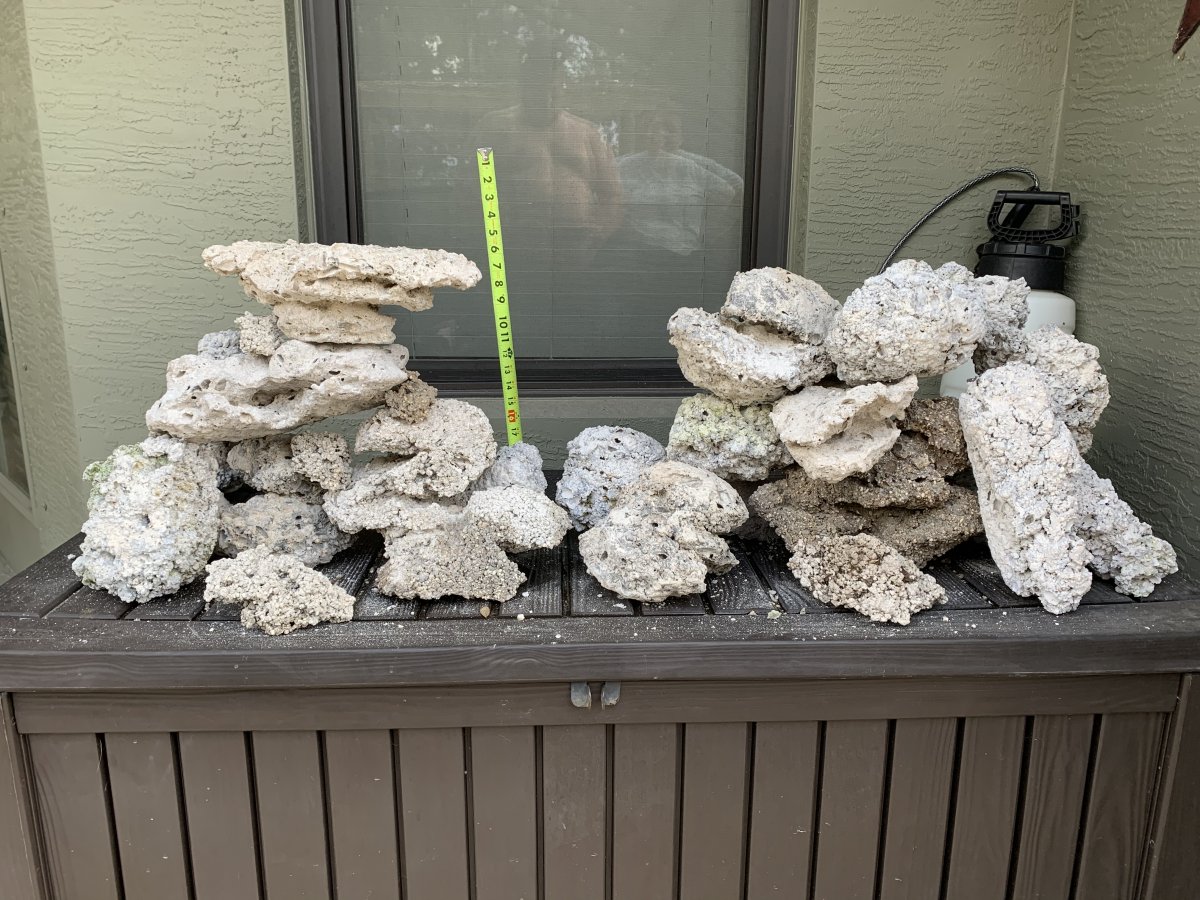 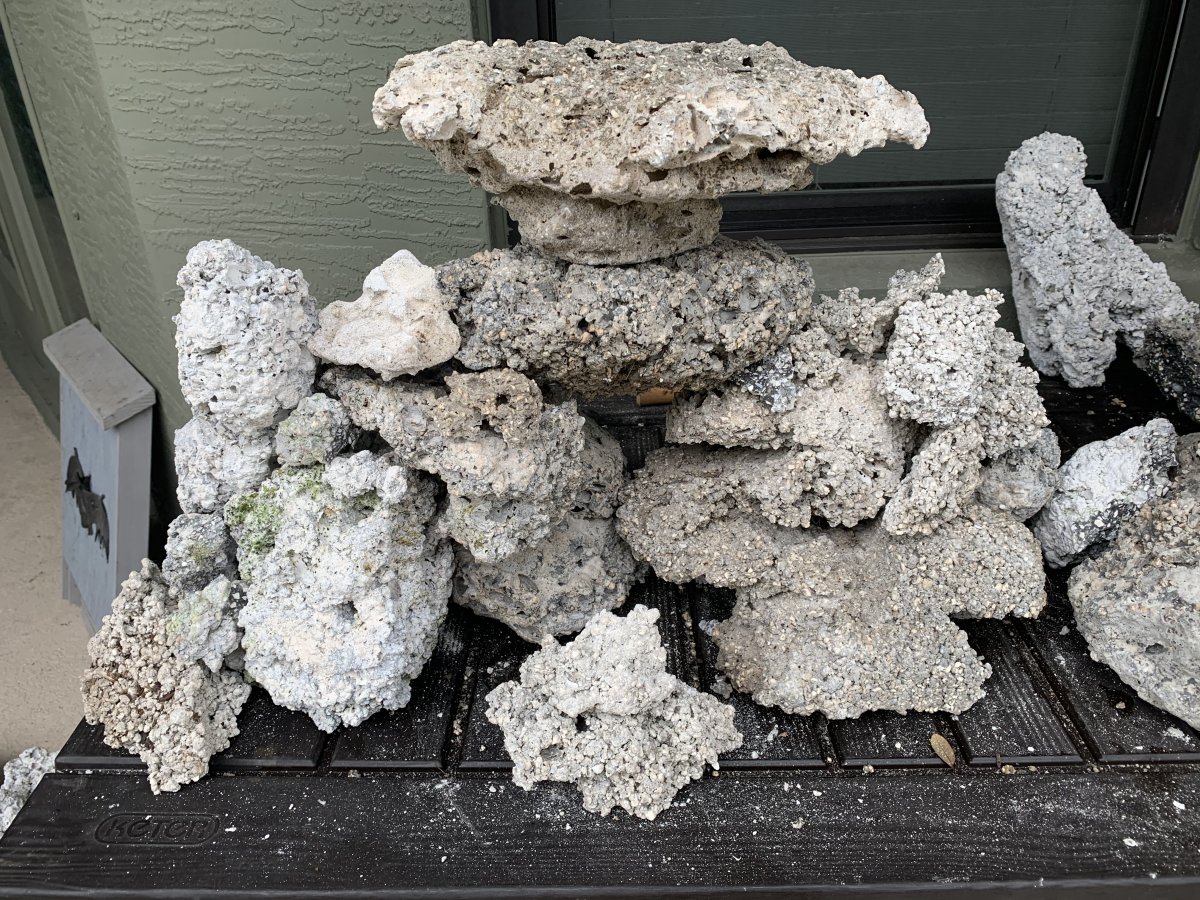 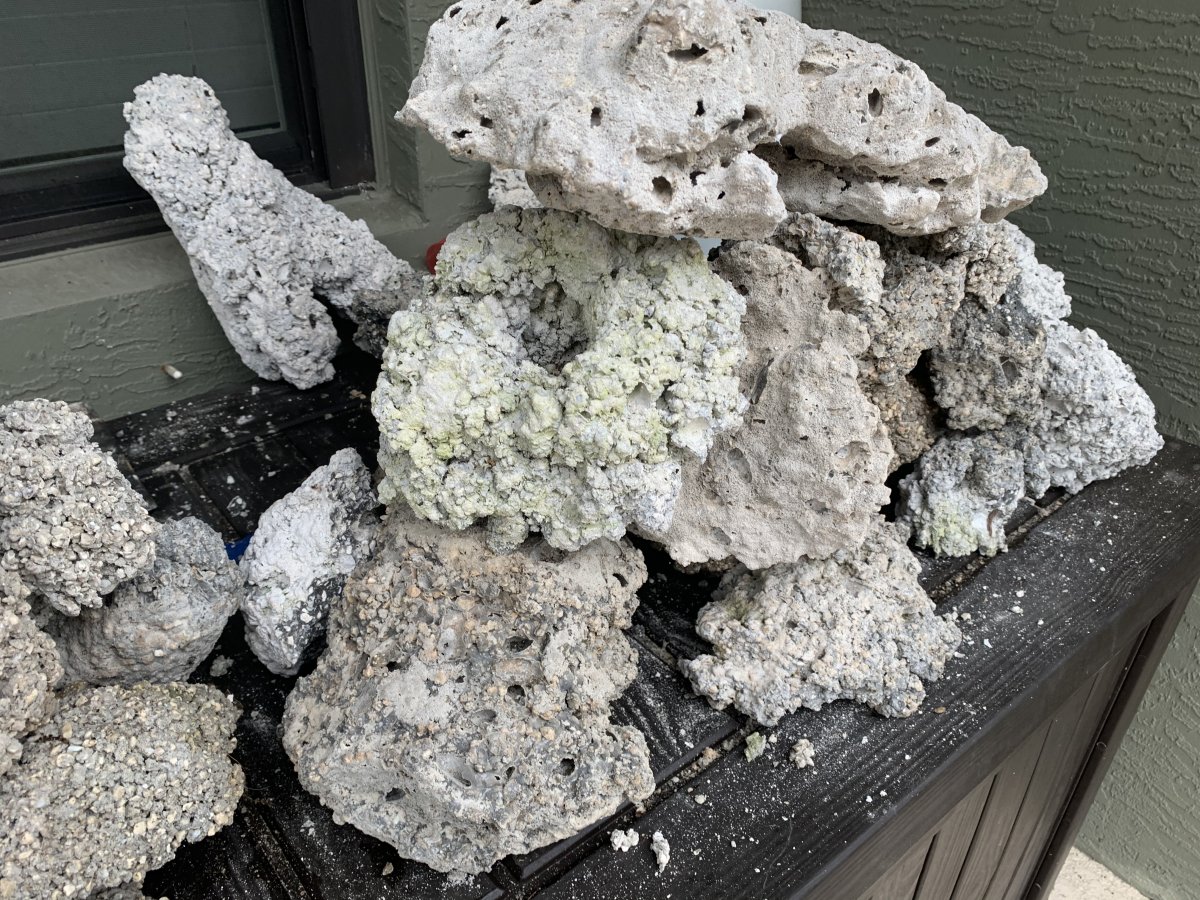 Next was the tank stand. I’m gonna have enough stuff on the back of this sumpless tank, I needed something to store more, and have more strength, than this store bought pressboard thing had to offer. 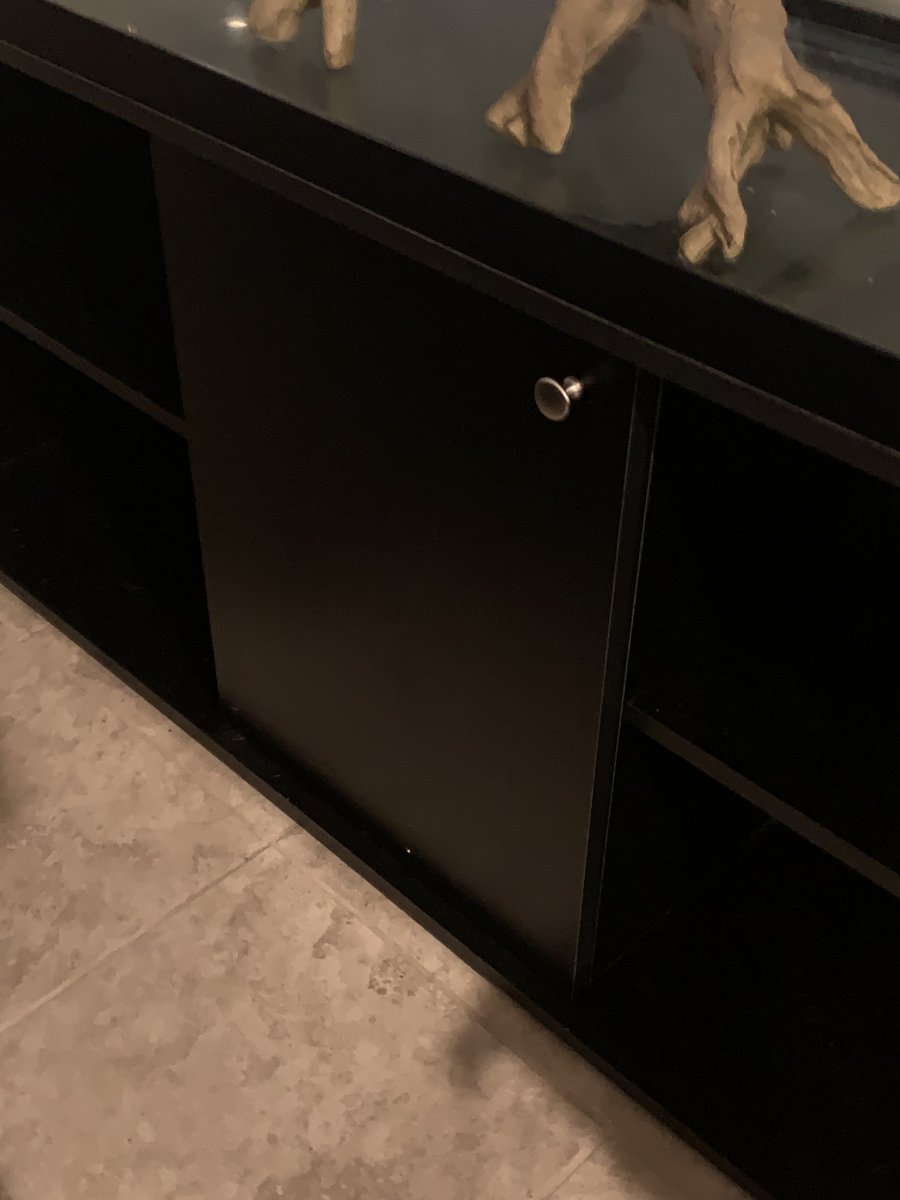 So I built a stand to support not only this, but I side portion to house the filter and make it easier to remove, as well as a place for a lamp and a place to run my tests. Painted the back of the tank a dark blue while I was at it. Didn’t like black, didn’t like the bright fish store blue...this did the trick of being in the middle.
Also instead of small doors, I made the entire front panel removable with heavy duty magnets. Can reach and see everything by just pulling the panel off, or removing the lid to the filter compartment. Stained a dark gray to match the other furniture, coat of poly, and she’s ready to fill and cycle! Oh, lights....just cheap T5’s setup and my old freshwater led for now...will upgrade those before doing any coral. Starting out as a fowlr to learn the ropes, then add coral later. More research to be done. 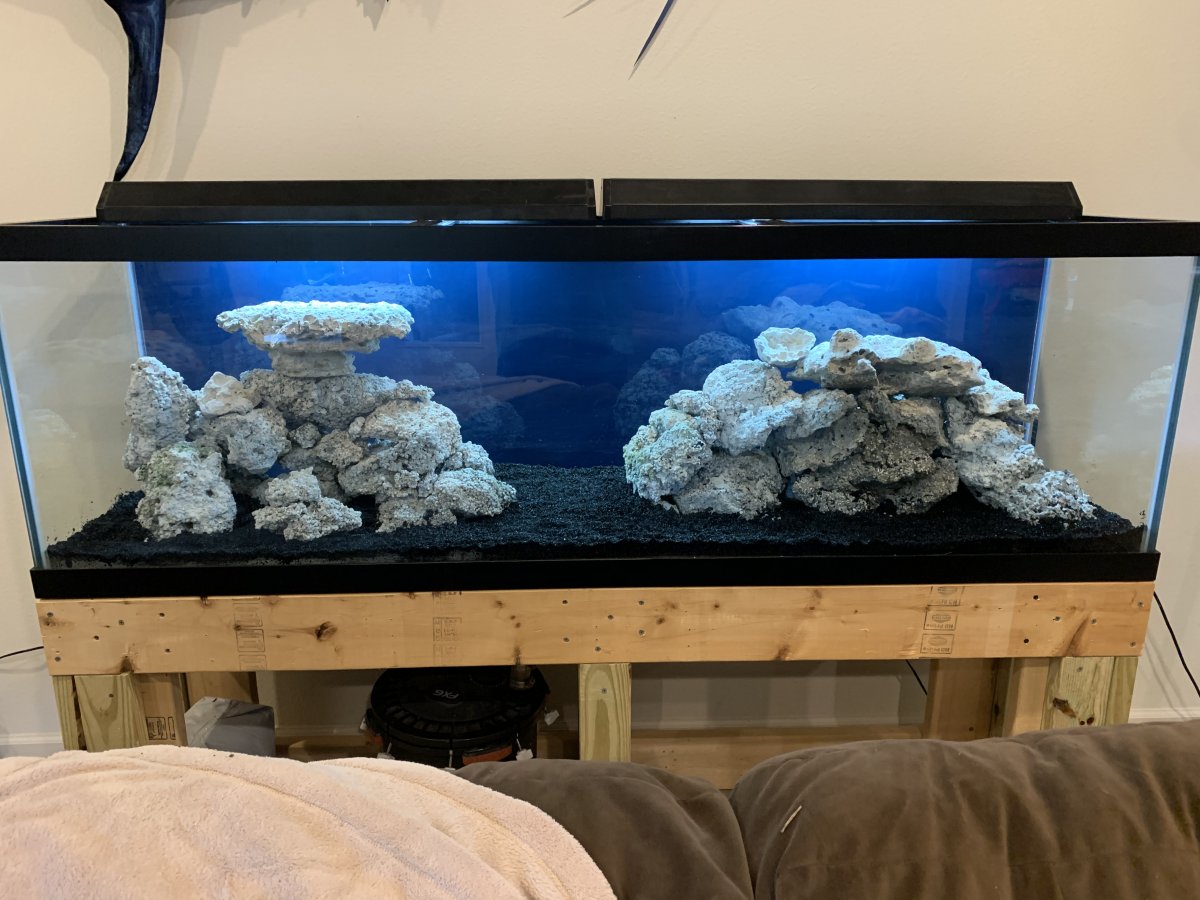 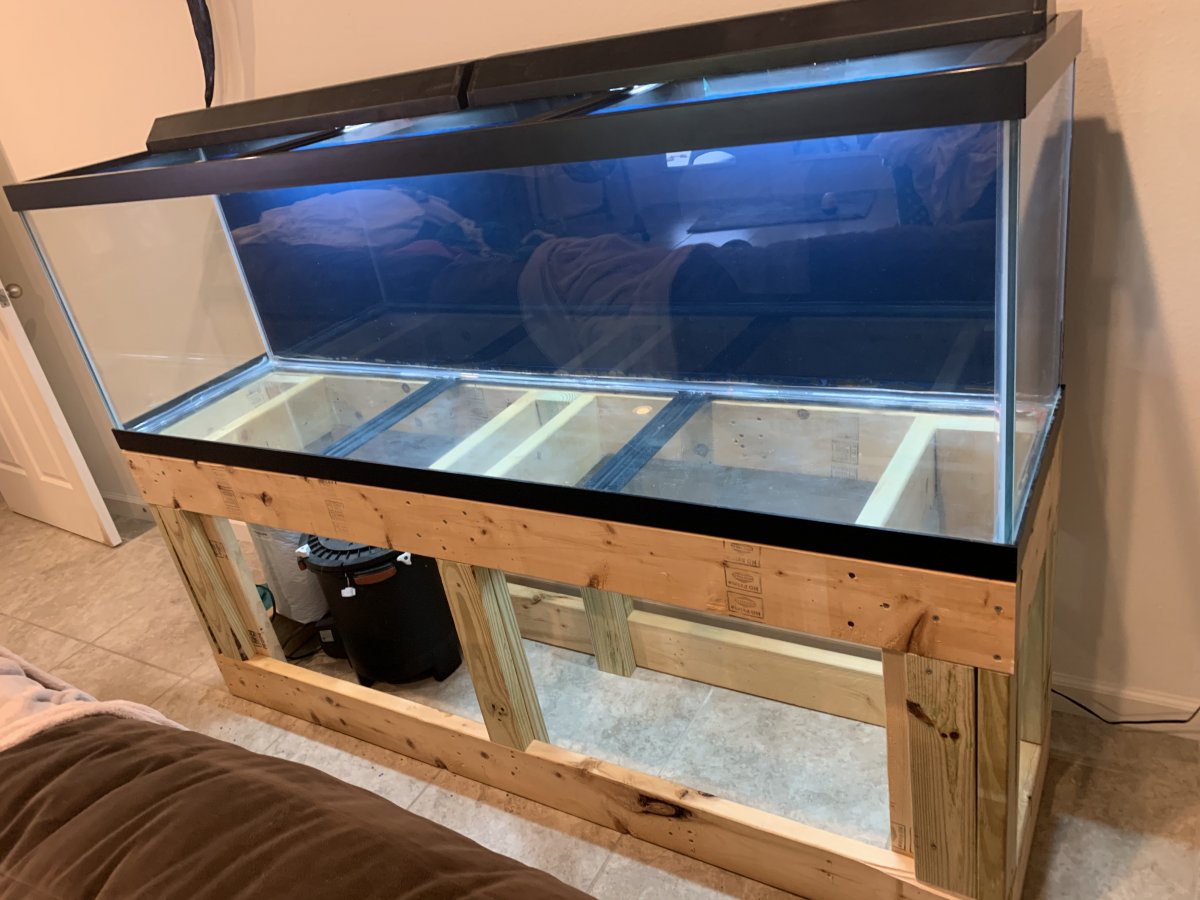 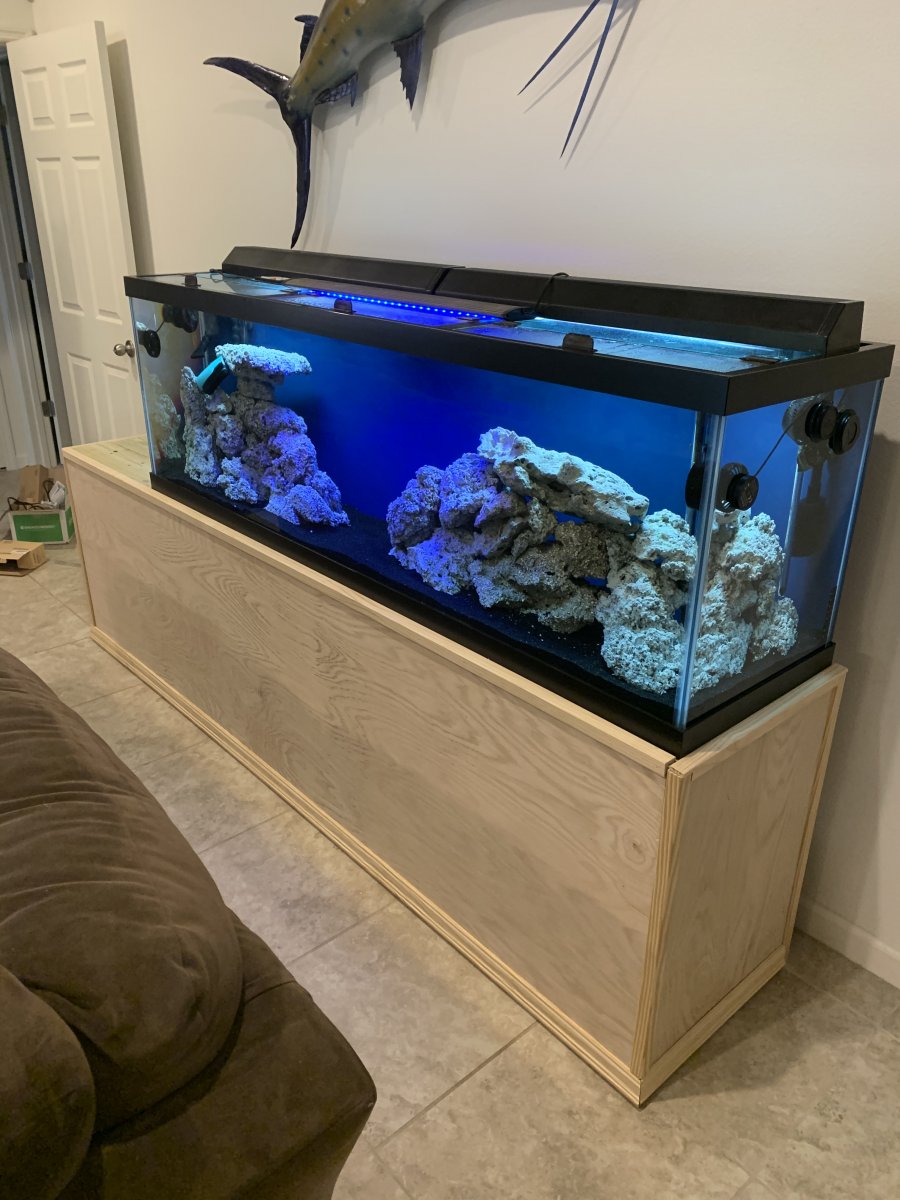 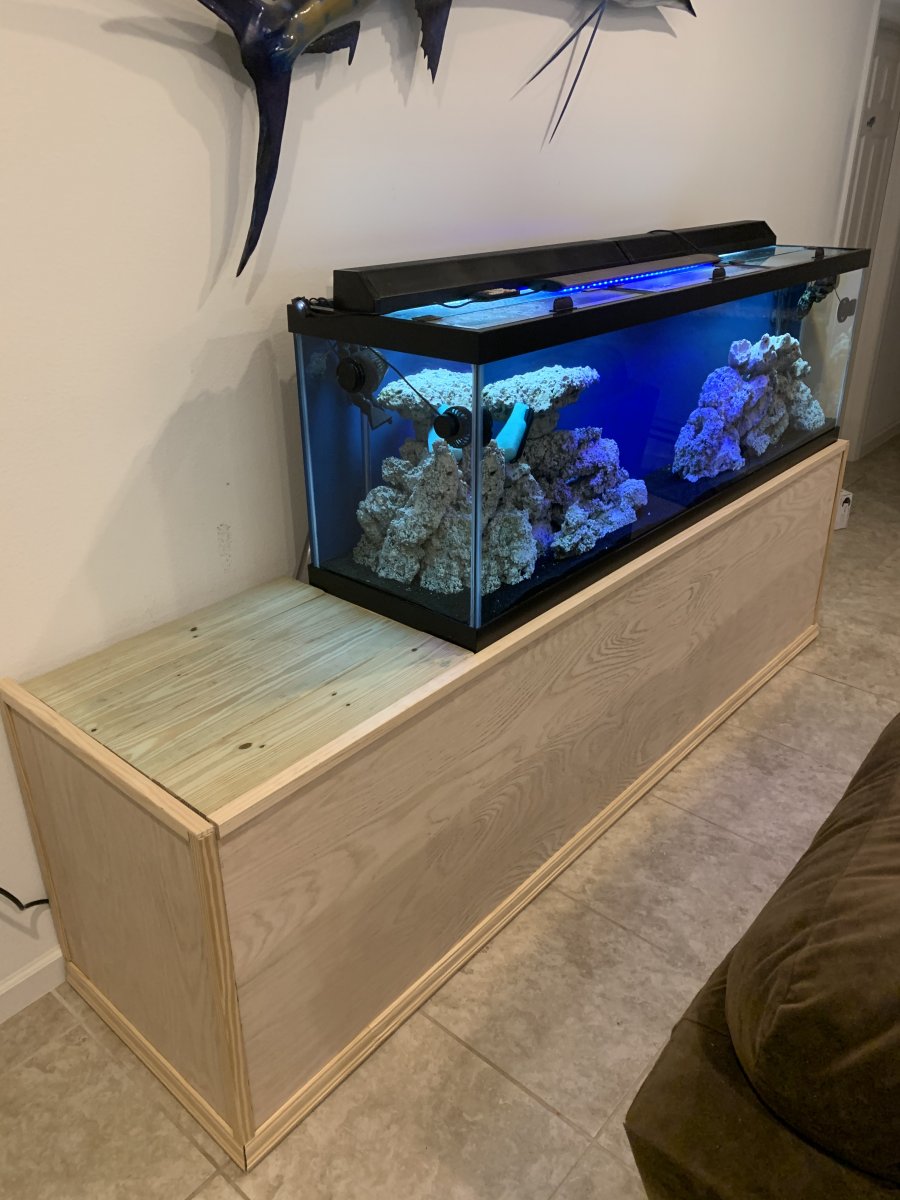 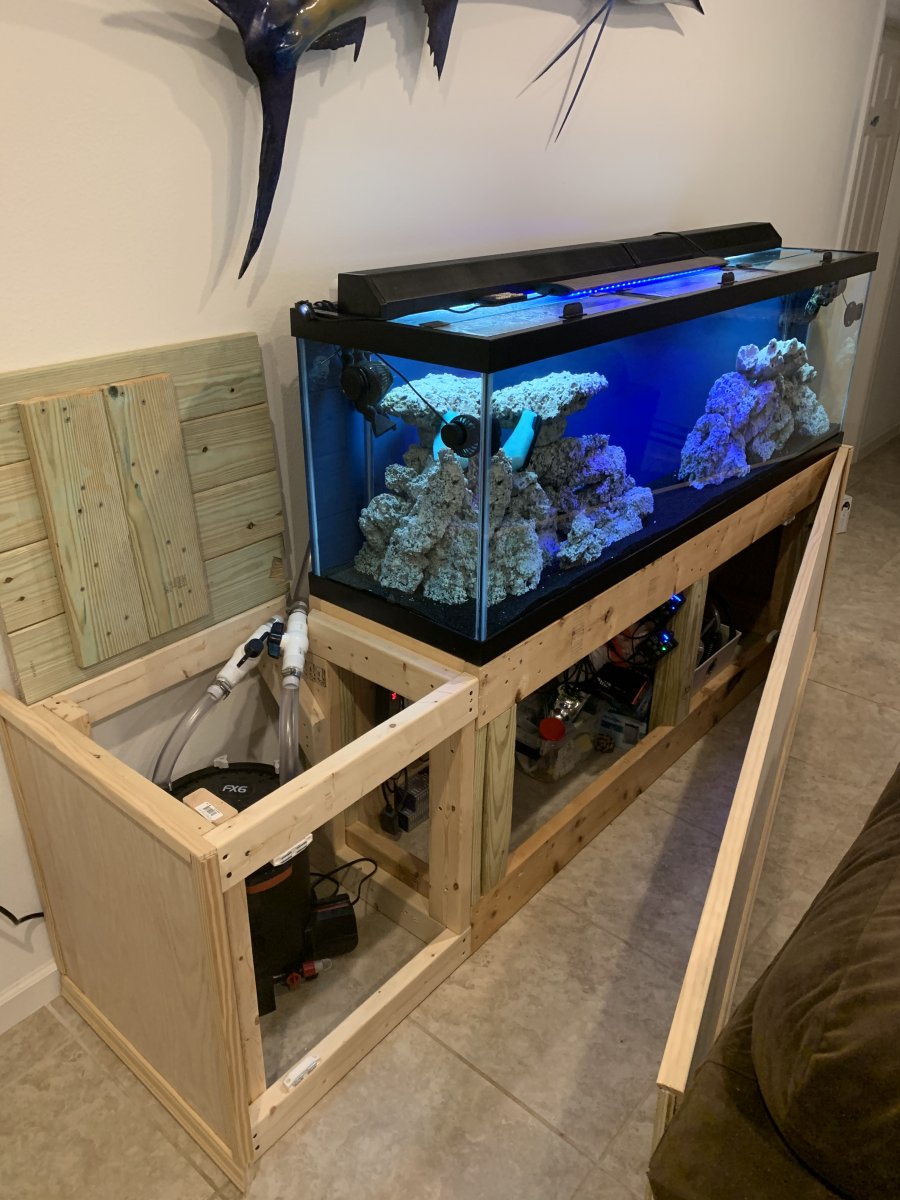 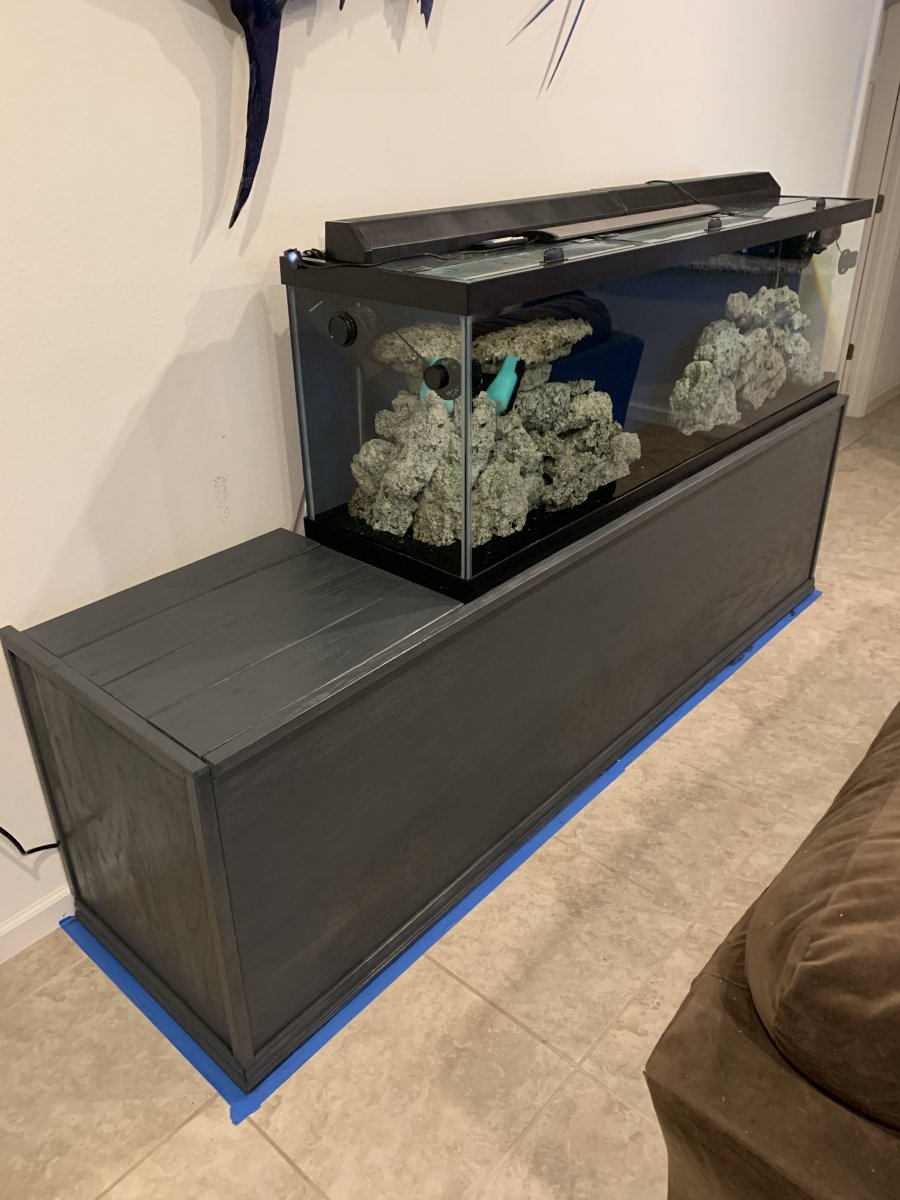 Used the Microbactor dry rock curing kit and tested daily. Finally got pH of 8.2, zero ammonia, zero nitirites, and 5 nitrates after about a month. Had my small filter for my 10 gal QT tank cycle with it, and picked up our first two fish, ocillaris clowns, the other day and dropped into QT. Going to do the full gambit, 30 day copper, prazi, etc. I’m an experimental biologist at heart forced to work in healthcare for a better paycheck, so running tests and experiments, observation, note taking, is no big deal for me. 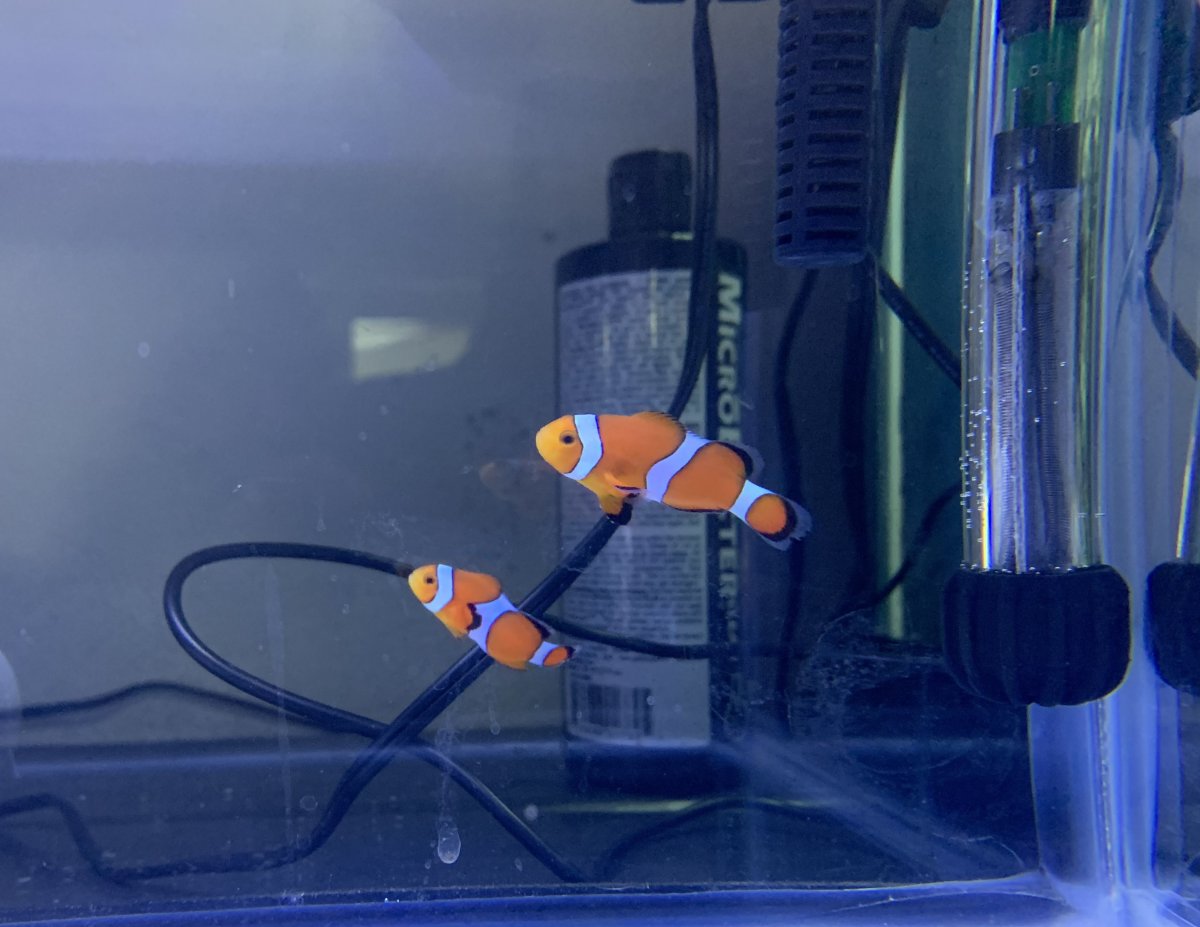 So here we are today! Look forward to joining the discussions now instead of lurking, and can’t wait to update you on the journey.
Last edited: Jun 8, 2021

Congrats on the new tank!!
OP