Hi everyone, I've been using Triton water testing for over a year now and I was always curious how my Triton test results would compare to another lab's test results that uses similiar technology. At MACNA this year I received a free ICP-OES test from Aquaforest, so I decided to send in the same sample from my tank to both of these labs.

Yesterday I received the results back from Aquaforest as well and just wanted to share this with you in case you're interested.
Last edited: Nov 1, 2016 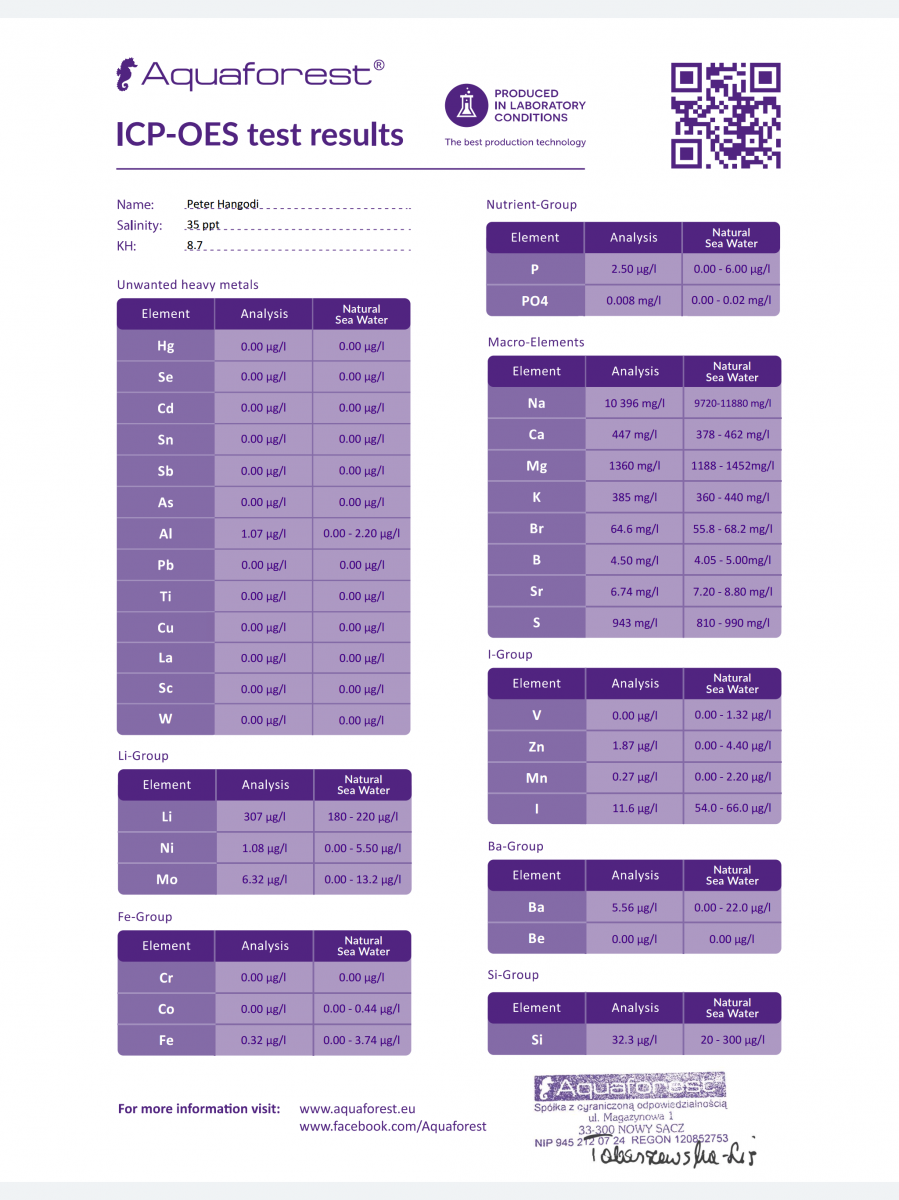 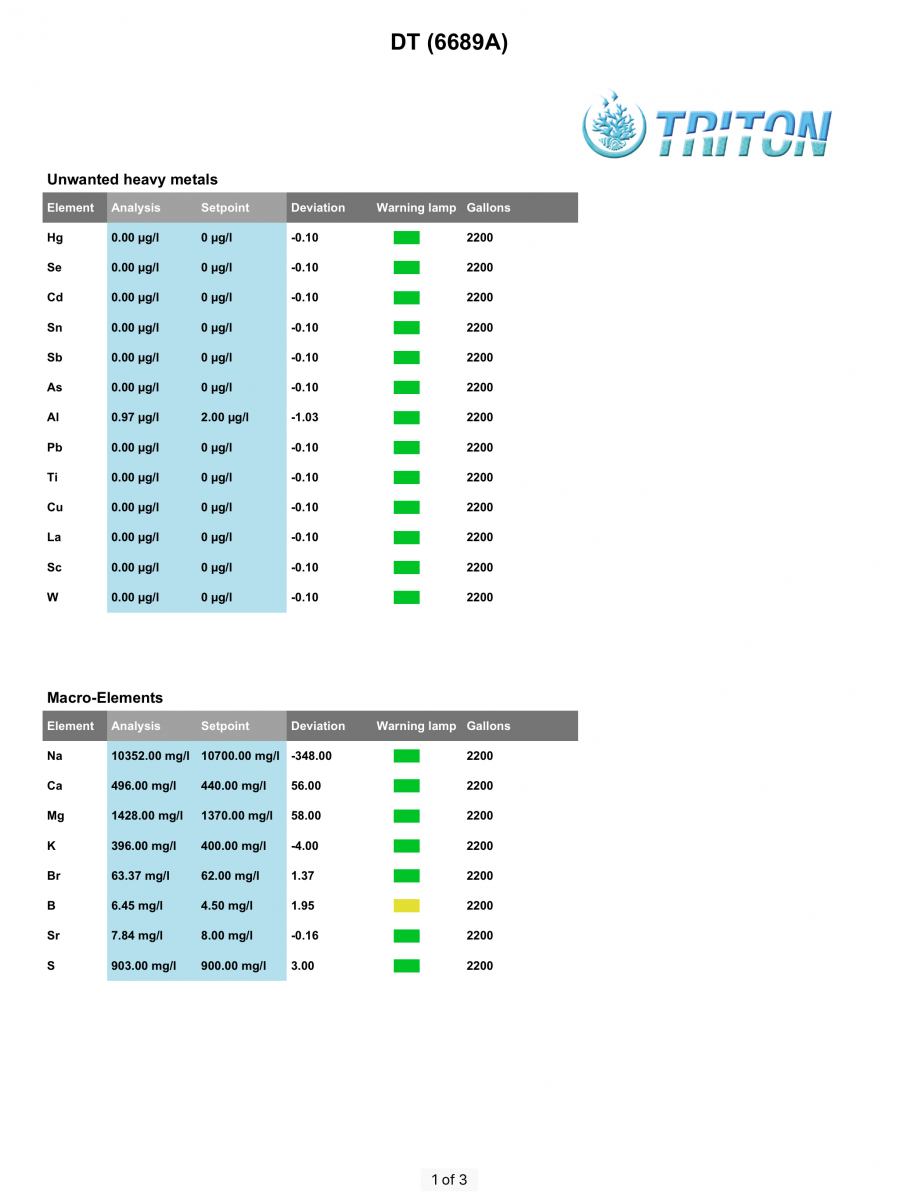 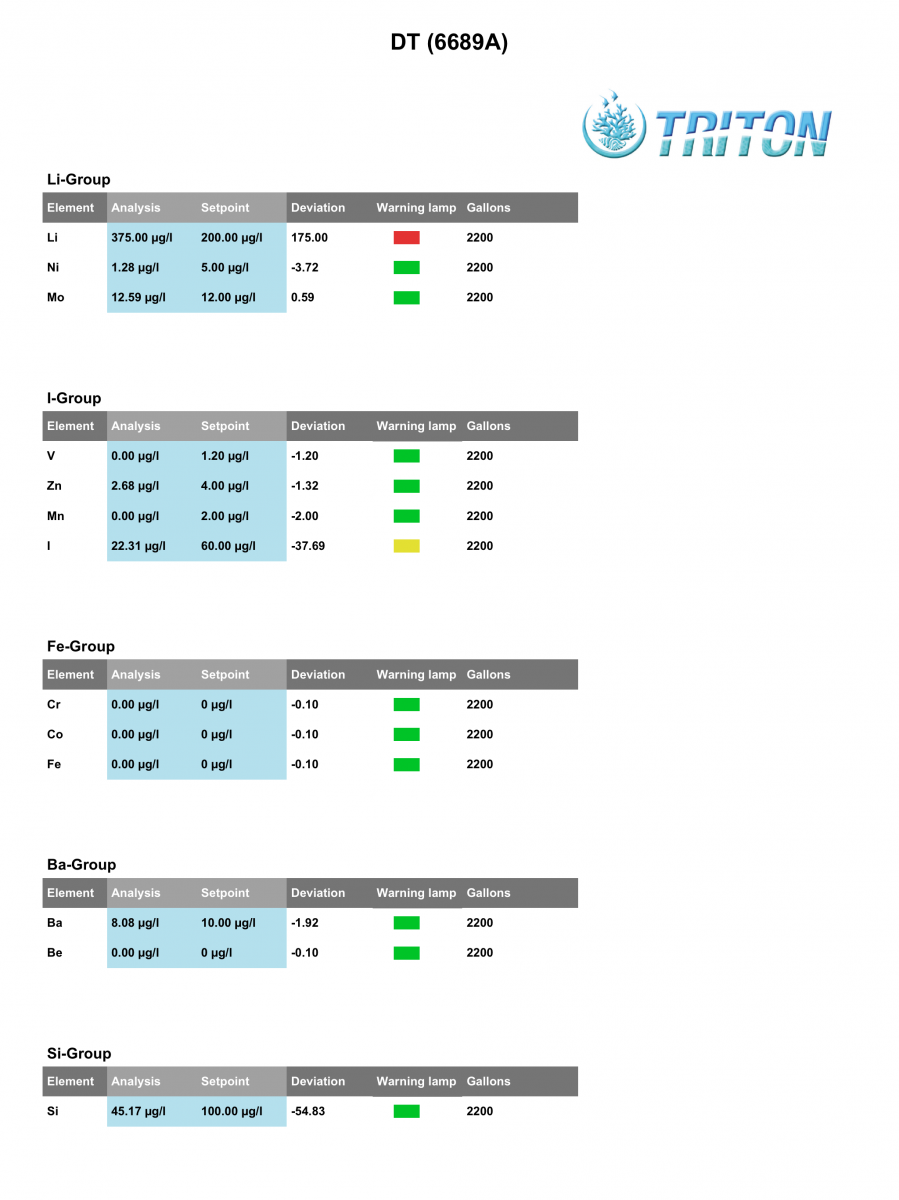 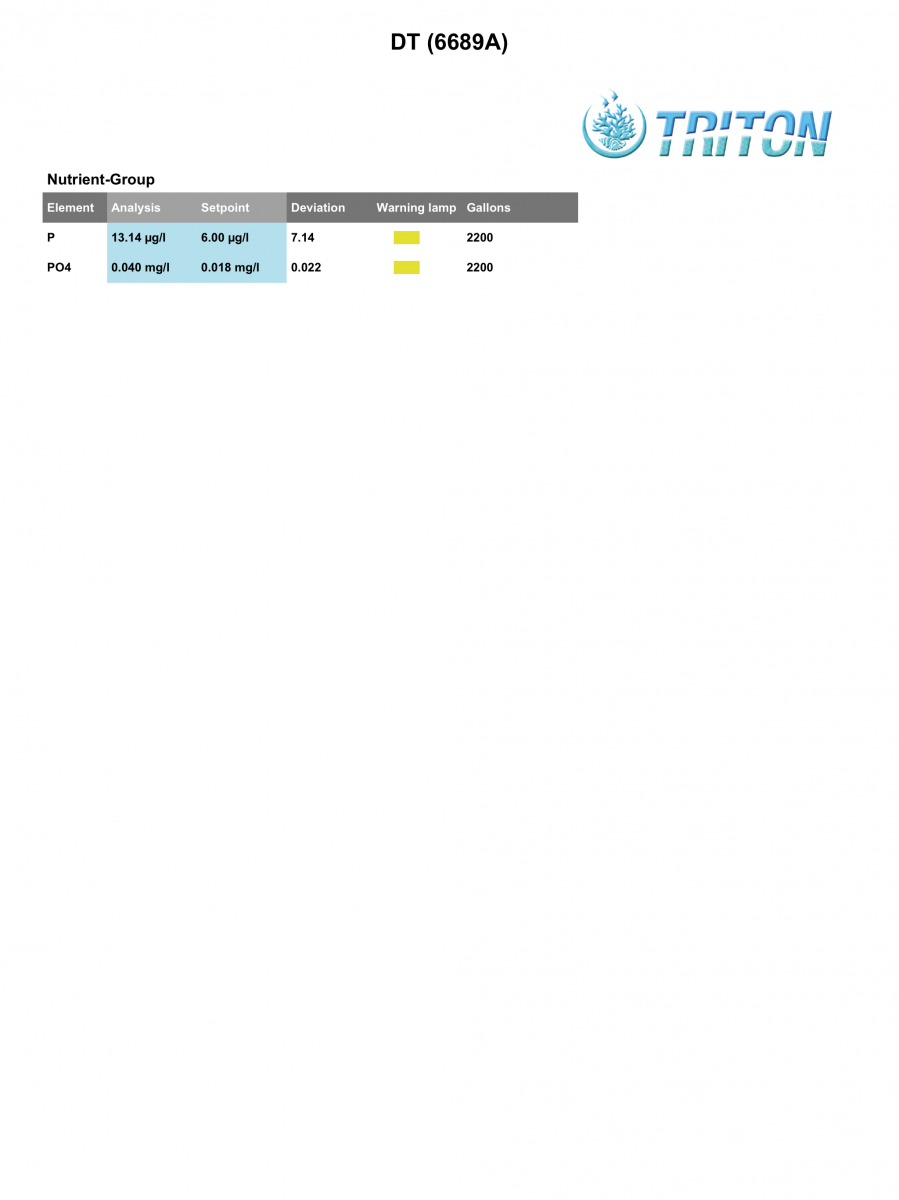 How long to get the results?
OP

This was my RO test from Aquaforest 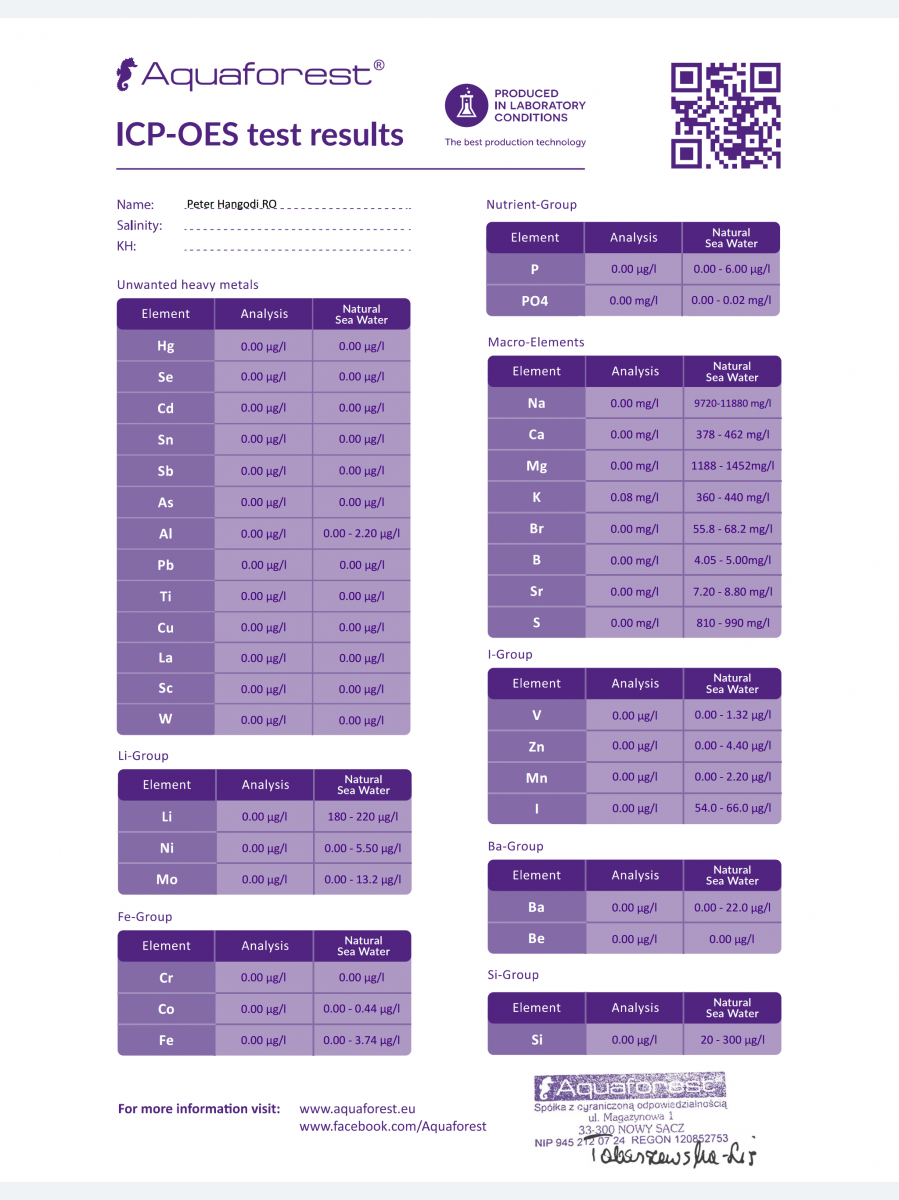 jsker said:
How long to get the results?
Click to expand...

Triton took just a little over a week, ** about a month.

I didn't know ** was doing this. What's the cost comparison? Does ** have their testing in the usa?

I believe that they only offered this for free at MACNA and this service currently not available to the public.
OP 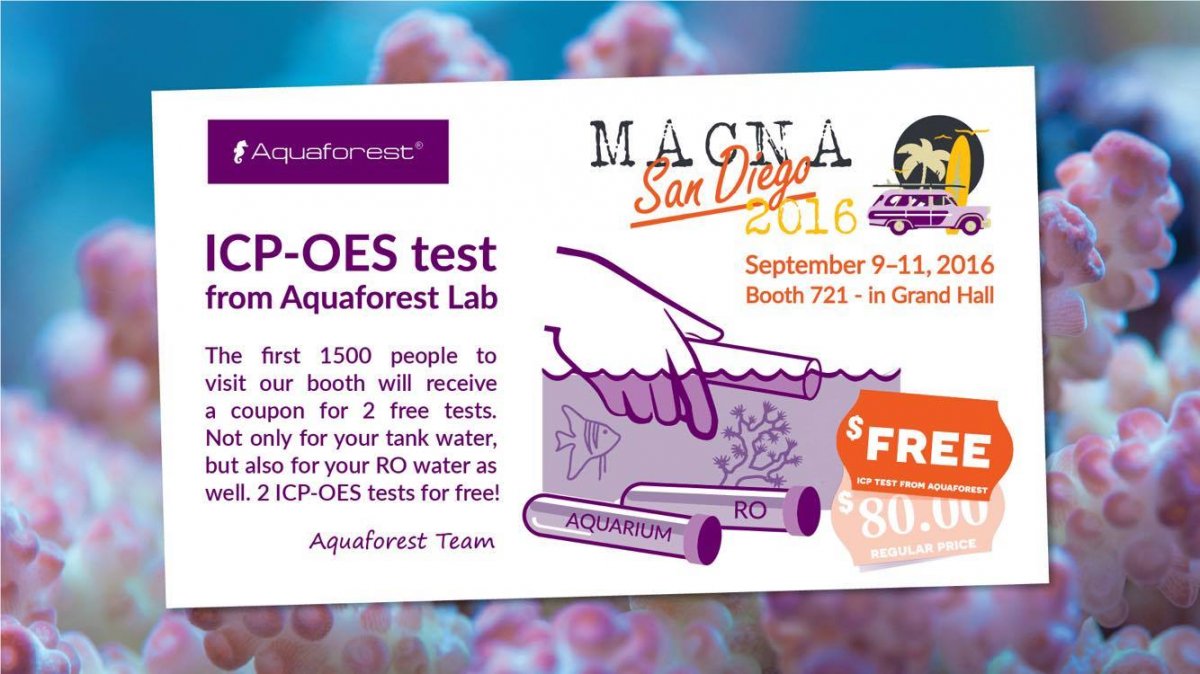 I too found variations between Triton and Aquaforest.
http://reef2reef.com/threads/saltmix-parameters-bring-on-the-test-results.233233/


It's not surprising though and I wouldn't be as concerned about those differences but understand we don't know what methods they use to perform the ICP-OES analysis so its hard to trust either of them for anywhere near 100% Accuracy. But both can be useful to give an indication of certain parameters and trends.

Thanks for doing this...

The method is same for both companies as the name itself is the method ICP-OES (Inductively Coupled Plasma (ICP) and optical emission spectrometer (OES)). The difference between them is the level of standardisation and standards used for the machines and even the machines. Interesting fact is that the levels for some elements are quite big....but for some they are almost same....I think the difference is due to difference in calibration level of the machines or standards

Semantics. Method is a very broad word and can apply to the methodology of how they perform the tests, calibration as you point out, and maintenance.

I believe its more then just calibration as that could be one thing. Seawater is also very complex and if the testing is done for all elements at once will not be nearly as accurate as testing for individual elements at a time. And even then ICP-OES isn't perfect for seawater. It also changes time and costs to get results depending on how the tests are performed.

According to another source ICP-OES is OK for the major ions in seawater but worse for the minor and terrible for the trace. ICP-MS would be better and even it has a hard time with the trace elements. And AA may be even better.
Last edited: Nov 2, 2016

ICP-OES (or AES) can be complicated to interpret.

I have run it myself on my own (well, my company's) machine. There is not always just a single answer from a single run of a single sample. I was doing it with much more careful oversight of the actual data than I'm sure any analysis company does, and this was my comment in one case:

"For initial testing I chose to use as the "standard" a sample of artificial seawater that was mixed to an approximate salinity of S=35. I mixed a 44-gallon batch using Instant Ocean artificial salt mix and reverse osmosis/deionized (RO/DI) water to a conductivity of 52.7 mS/cm, and allowed it to settle for three weeks. I then proceeded to measure its calcium concentration by ICP-AES (inductively coupled plasma-atomic emission spectroscopy, an $80,000 analytical instrument. I was somewhat disappointed with my inability to use this sophisticated technique to get a precise answer. Despite taking five different samples and analyzing them at eight different emission wavelengths using two different calibration methods (five standard additions of known calcium concentrations to each sample, as well as comparison to a fixed 1000 ppm commercial calcium standard), I was unable to get consistent values. Some of the samples were acidified or filtered through submicron filter membranes to determine if solid materials were impacting the result (they were not). Overall, I took more than 200 measurements, each involving three replicate observations of the emission intensity. Nevertheless, the result was not very satisfying, with a substantial variation occurring between the different values. The average of every measurement taken was 336 ppm. With the uncertainty involved, however, I'd conclude that the true value was probably 340 ± 40 ppm. I also measured the same sample once with a Salifert brand test kit and got 330 ppm calcium."

I was thinking about setting a standard for the test. How one will decide what should be an absolute standard value for a particular ion? Or what serve as standard source comparable to see water? I think it will be average of some ocean water samples but in a true scenario that varies too.

From my communication with Triton they test the sample 7 times.

Also, they do not acid wash the vials they send to have samples collected. They claim they don't as acid washing the vials will cause interference with some readings like Iodine.

According to a 3rd party source acid washing is important to remove potential contamination and properly done and rinsed will not interfer with test results.

My guess is they don't to keep costs lower.

Anirban said:
I was thinking about setting a standard for the test. How one will decide what should be an absolute standard value for a particular ion? Or what serve as standard source comparable to see water? I think it will be average of some ocean water samples but in a true scenario that varies too.
Click to expand...

It is very difficult to DIY if a seawater matrix is important. Buying one is best, but it is expensive. Second best is the method of spiking samples that I mentioned above.