My name is Bryon (pronounced like Brian or Bryan) and I live in Oklahoma. Been wanting to start a Reef Tank for a long time just never pulled the trigger. I finally did this year and am excited to get started with everything. I ended up ordering a WaterBox Cube 20G with AI Prime 16HD. The Tank arrived here last week and its currently setup and cycling. I ended up going with Caribsea Fiji Pink Live sand, Marco Dry Rock, Cobalt Neo-Therm 100W heater, XP Aqua Duetto ATO, Marine Pure Spheres, Marine Depot RODI Advanced 100GPD, Hanna Checker Kit, RedSea Reef Pro Salt, and the Tunze Care Nano. The Stand i went with was the WaterBox 2418 stand in Beige. Wife liked the color as it matches our room better than black or white. "Happy Wife". Tank has been up and cycling for almost a week now and have been taking it slow. No fish while i wait on the cycle to finish. Added some Fritz Turbostart 900 day 2 and have been ghost feeding some pellet food every other day or so. Looking forward to learning more and getting further into this new hobby. I have had fresh water in the past but always loved reef tanks. Hope you all enjoy the build thread as i get further down the road. 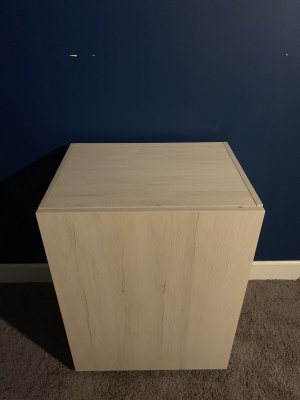 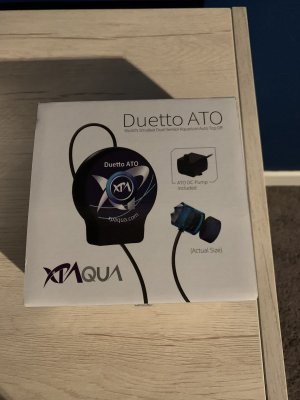 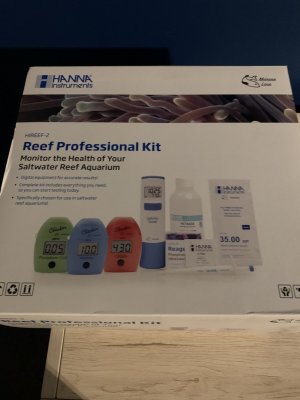 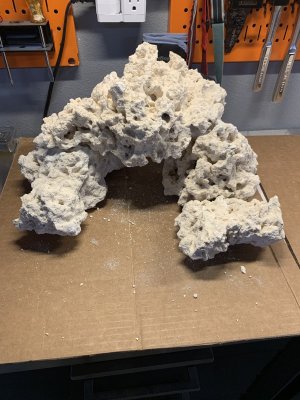 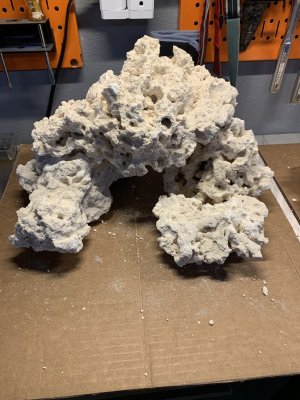 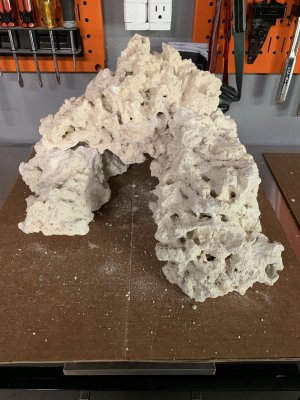 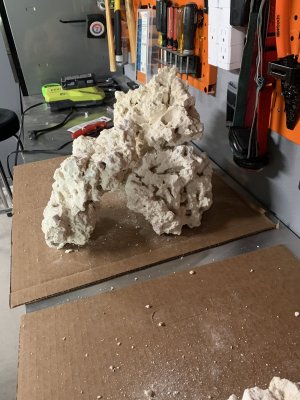 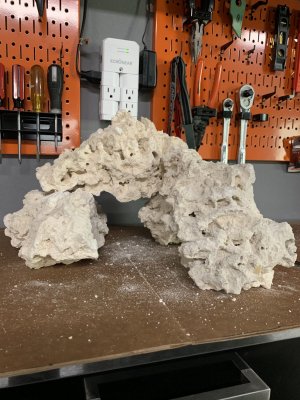 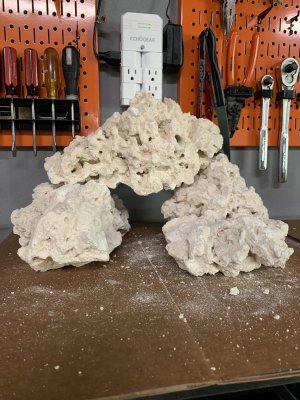 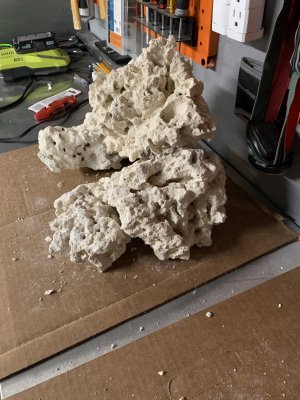 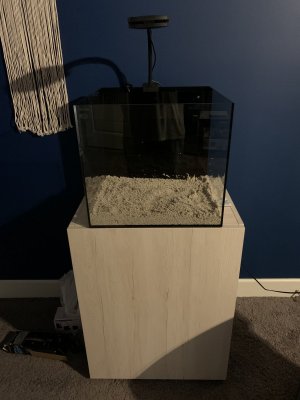 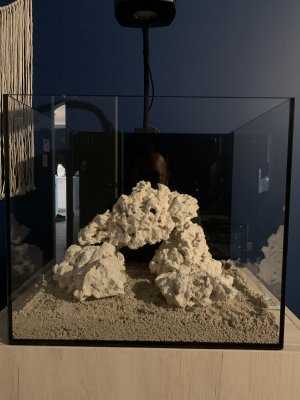 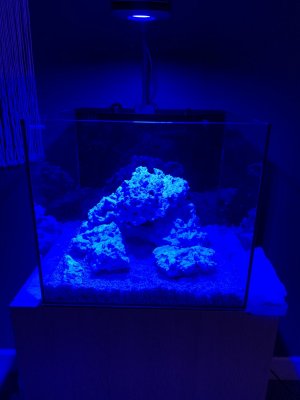 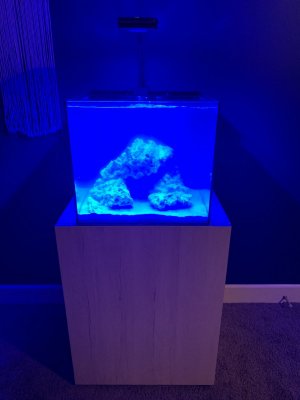 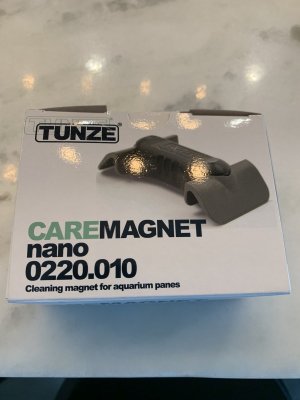 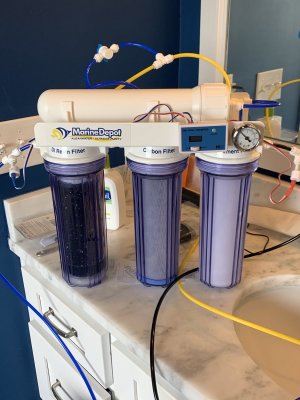 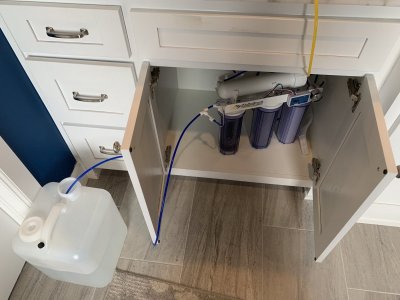 Very nice start! Love the look of that tank and stand. You'll probably want to keep your lighting very limited while there are no corals in the tank, but have you looked into what settings you want to use? If you haven't come across the AB+ settings (ATI Aqua Blue Plus T5 emulation), take a look at this video on BRS:
And maybe this for more background:

Using these "bluer" settings will help control algae as well as make any corals or anemones pop in color.

Does that cabinet have doors/storage space, or is it just a "solid" box?
OP

TriggersAmuck said:
Very nice start! Love the look of that tank and stand. You'll probably want to keep your lighting very limited while there are no corals in the tank, but have you looked into what settings you want to use? If you haven't come across the AB+ settings (ATI Aqua Blue Plus T5 emulation), take a look at this video on BRS:
And maybe this for more background:

Using these "bluer" settings will help control algae as well as make any corals or anemones pop in color.
Click to expand...

Thanks. Lights were only on to take a pic. They have been off ever since until the cycle is complete. Currently im running Waterbox's lighting profile but will take a look at the video to see about any changes. Have also looked at a few from AI and WWC as well. Sure ill get it all lined up once things are settled in.
OP

TriggersAmuck said:
Does that cabinet have doors/storage space, or is it just a "solid" box?
Click to expand...

Yes it does have one door and plenty of storage space. Store my Salt tub, most all of my water testing equipment, and a 5G bucket for ATO under there right now. Im really glad i went with the oversized stand for a little extra room.

Update - First inhabitants are in the tank. Clowns have been in for almost a week. One is an Orange Storm and the other a Frostbite. Frostbite is a little bigger than the storm but other than feeding time they seem to be getting along pretty well.

Added some various snails and hermit crabs over the weekend. Crabs are kinda fun to watch. I actually got to watch one swap shells the other day.

Added the Toadstool leather at the same time and had full extension within an hour or so of placing it in the tank. Wifes reaction to it being partially extended was pretty funny. Once it was fully extended she liked it.

So far everything is doing great in the tank. Cant wait to add some more corals and get this looking better. 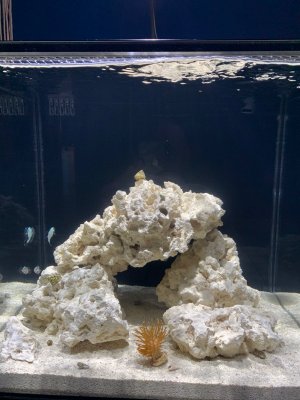 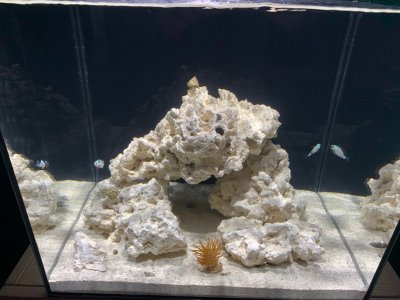 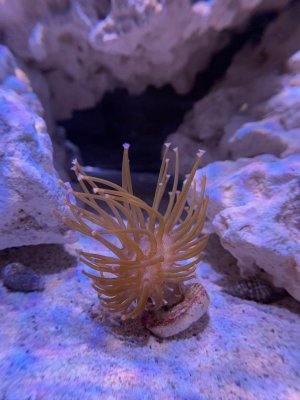 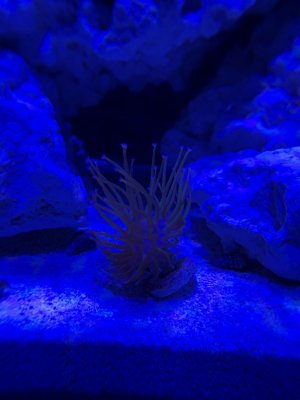 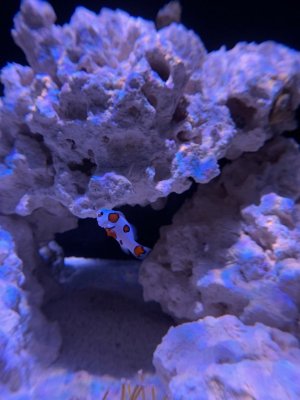 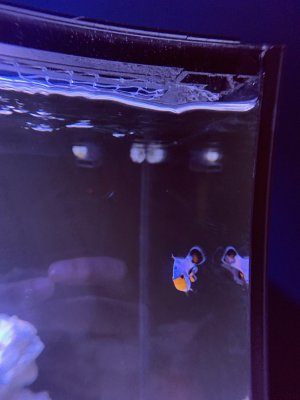 Guess I need to update this.

On September 9th I lost my Orange Storm Clown. Pretty sure it was due to aggression from the Frostbite. It wouldnt come up to eat and just stayed hidden majority of the time. Tried different kinds of food and tried target feeding but nothing seemed to work.

On September 19th I got a DaVinci Clown and a Lawnmower Blenny. Had some initial aggression from the Frostbite so I added her (pretty sure its female) to an acclimation box for a day and that calmed him down a bit but then it started up again. Put her back in for 2 more days. Then started noticing white poop so setup hospital tank and moved them both over to medicate the food. After 2 weeks everything was good and moved back to display tank and they have been pals every since.

I participated in my first ever live sale with the TSA Live Sale. Was quite a bit of fun and got some corals after my wife told me I needed to add some color to the tank. So picked up a Holo Hammer, RFA, Duncan, Ricordea, some Zoas, CandyCane and a Monti. Everything acclimated and dipped and has been happy. Did end up loosing the Monti and not sure if it was too much light or not enough flow.

With everything doing good in the tank and the parameters stable decided it was time to add another batch of corals. I participated in the WWC Live sale in October and picked up a few more things. Favia, Favities, Ricordea , more Zoas, Echinata, Discosoma Shroom, and them a mystery pack which came with a chalice, Turbinaria, War Coral, Montipora.

Somehow ended up with a hitchhiker Stomatella snail in one of the shipments but thats ok with me. Free clean up crew. So far fish and all corals with the exception of the montiporas are great. Added a Nero 3 for flow a few weeks after adding the WWC corals as well as changed out my stock return pump nozzle to a RFG from VCA.

Funny story as you will see in one of the pics attached. The Discosoma shroom came in not attached to the rock it was on. I placed it in a small cup with some rubble rock to try to get it to attach, placed it in a low flow area and left it there. 2 weeks later i checked it to see if it was attached and while pulling it up it flew out of the cup and right into the Nero. Luckily the whole foot and middle section was still intact so tried it again and was going to leave it for longer. This time however it decided to attach itself to one of the hermit crabs and take a ride. Eventually it came off and settled in a spot on the top of my rock work and attached quickly. So guess its happy but did ride around on the crab for a day or two.

Tanks is now 4 months old. Have learned a ton from reading posts here and doing research. Have not added anything else to the tank at this point as I want everything to settle in and grow. Did recently notice my first Aiptasia so tried to superglue over it since its growing out of the side of one of my Utter Chaos Zoas. That didnt work and it just moved to the other side. So working on another way to get rid of that. Had some bubble algae crop up recently as well, luckily it was on a plug so i just removed it and scraped it off.

Well just put a deposit on a new system. Getting a 150G Planet Aquarium system. So hopefully in about 6 weeks or so i will be able to start getting that up and going. I knew in the beginning that i would want a larger system but wanted to try my hand at something smaller to start. So almost a year into it and here we go. Diving head first. Excited to build a new system and expand my knowledge in the coming months. Getting the stand and canopy unfinished as my wife is very particular about the color matching the rest of the furniture. So will be painting it when it comes in. 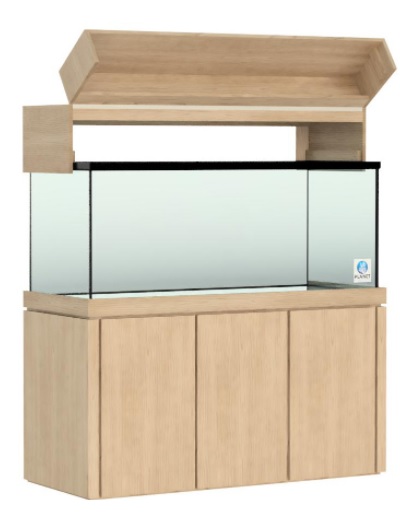 Here is FTS of current 20G. Things are starting to fill in a bit. Hammer has already split and one of my Yumas split 3 times so far. 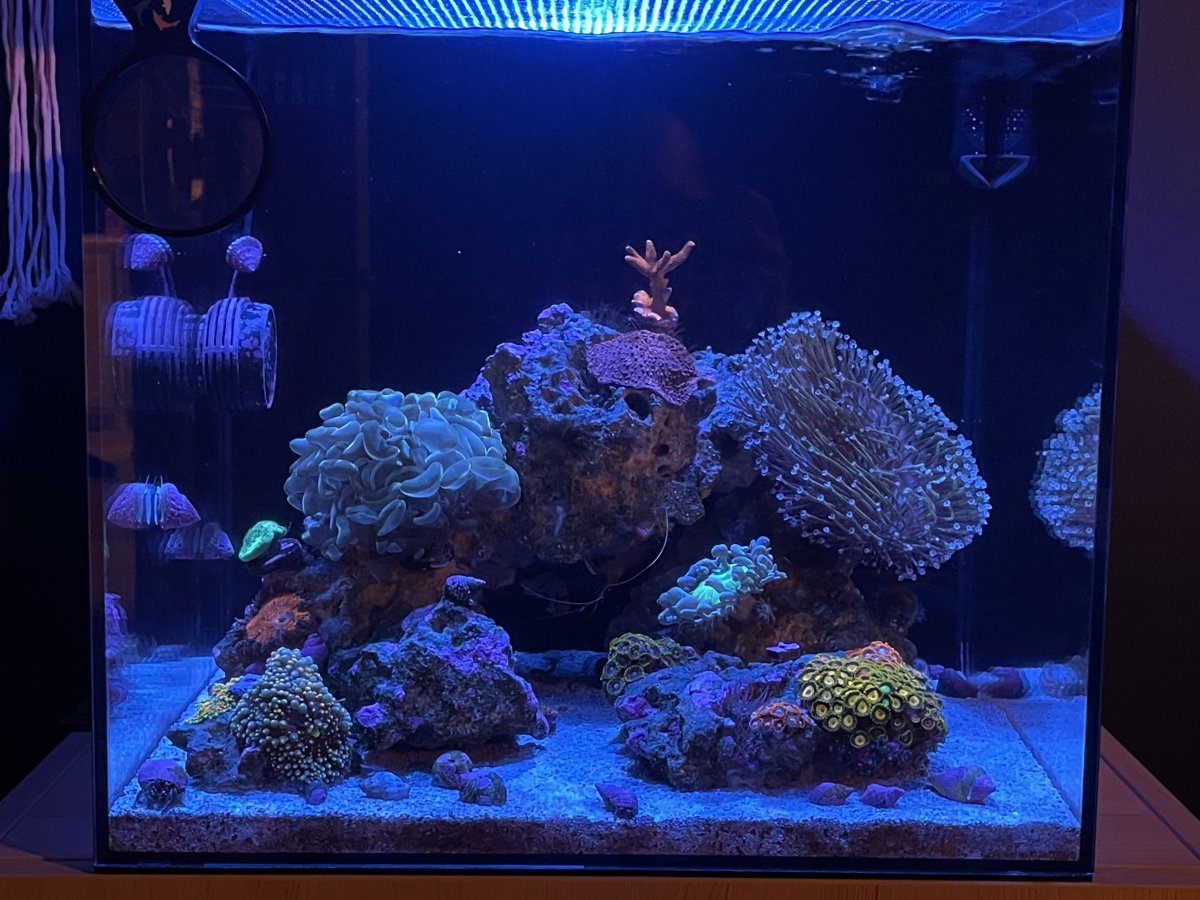 Looking forward to your 150 build ! Beautiful tank you have now
OP

Oldsman said:
Looking forward to your 150 build ! Beautiful tank you have now
Click to expand...

Thanks. Got a call from the LFS yesterday and it should be delivered to them today. So hopefully can get everything picked up this afternoon.
OP

Tank is now almost a year old. Here is the 11 month pic. Everything is doing well. Finally getting nutrients under control. 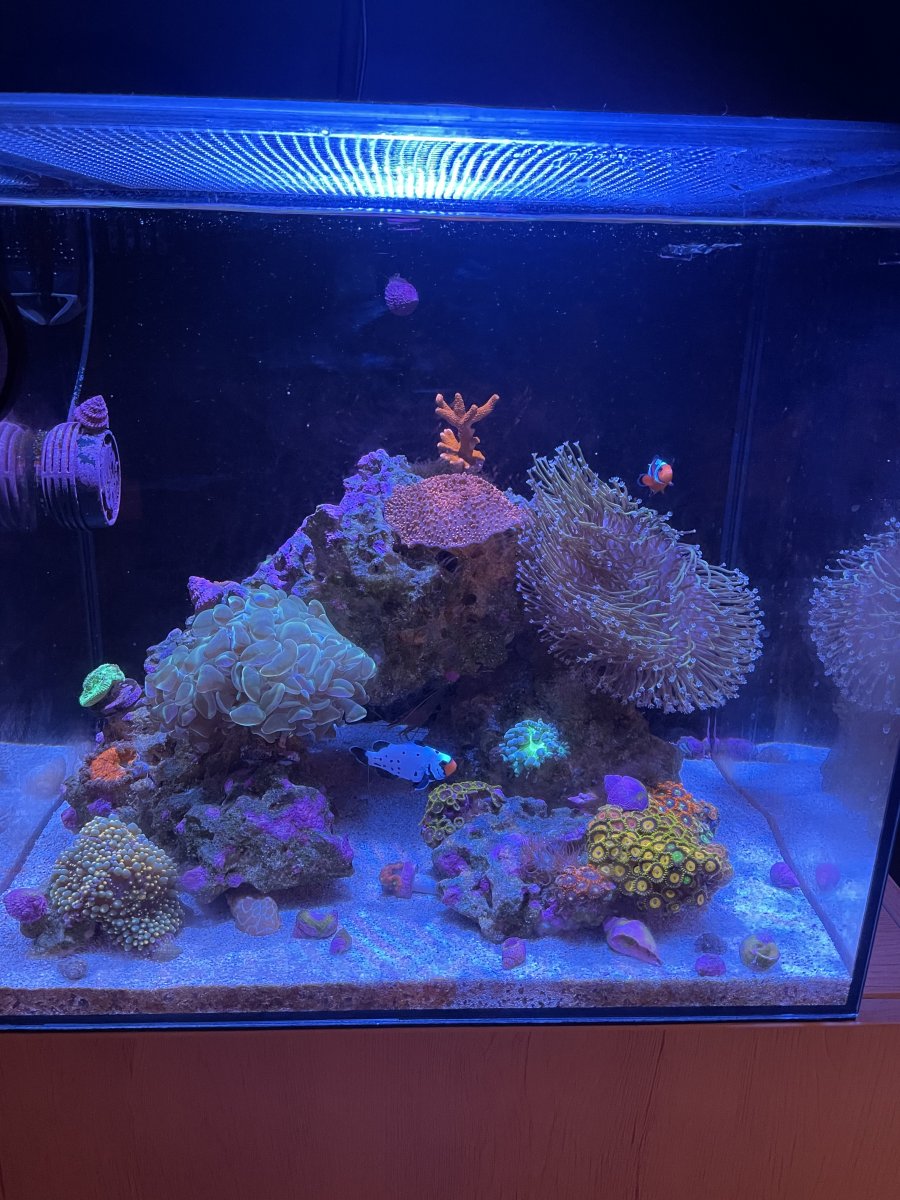 Your tank looks great. Makes me wonder what I have been doing so wrong with this thing.