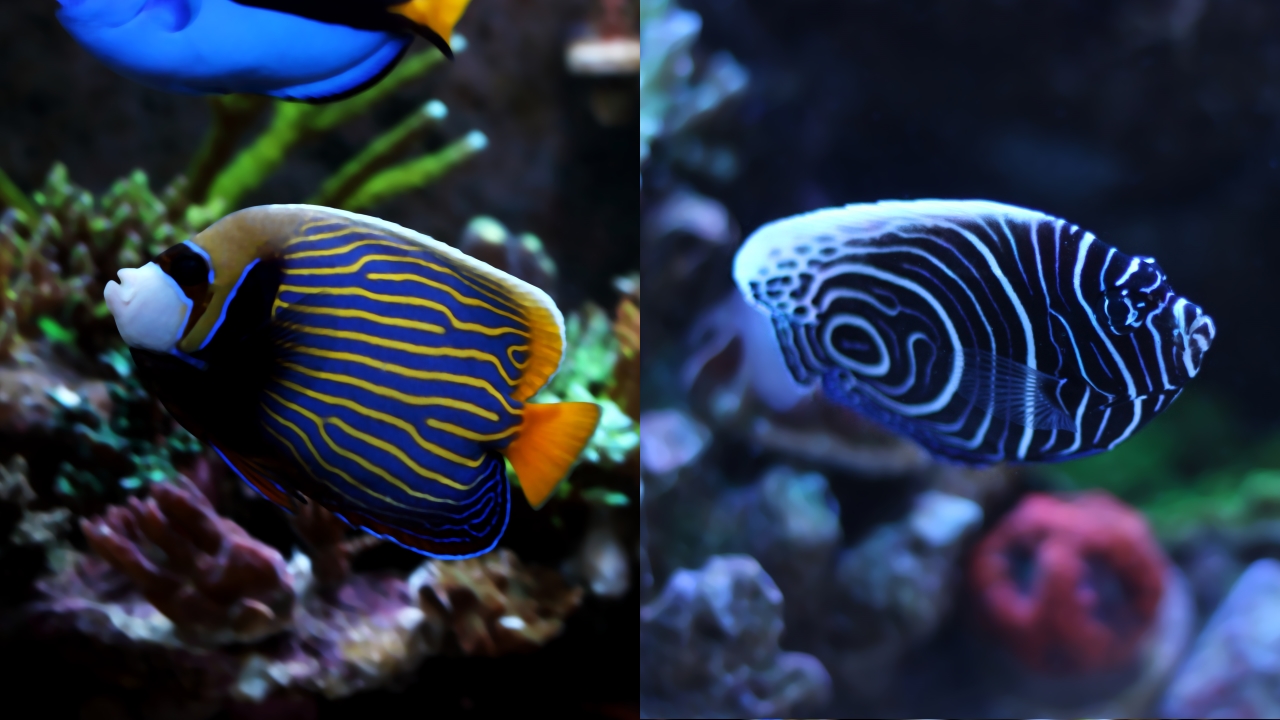 The emperor angelfish (Pomacanthus imperator) is the most well-known angel fish in the aquarium industry, With striking colors, bold body, combined with personality and an attitude, It is not only me but also many other hobbyist consider it the most beautiful fish. It is readily available and relatively hardy fish and will thrive in most aquariums given certain requirements of nutrition, water quality and space.


The Emperor Angelfish transforms through three different stages (juvenile, sub-adult and adult). In each stage, its appearance drastically changes.

Juveniles are dark blue with electric blue and white rings; adults have yellow and blue stripes, with black around the eyes. It takes about 24 to 30 months for an emperor angelfish to acquire its adult coloration. Full adult size in the wild is about 40 cm (15 “) in length. While in captivity, it can reach up to 30 cm (12”).

The Emperor Angel can quickly get pretty large, it requires a 220 gallon or larger tank with live rock for grazing and hiding. I keep my Emperor in a 180 gallon, my tank can hold a young adult for some years to come. From what I noticed the footprint of the tank is the most important to kept it long term. minimum footprint is 72” X 24” . Height of the Tank is not a big factor as the fish only swims mid tank and between the rocks. They also require extensive rock-work and deep caves to feel secure, combined with open spaces between the rocks.

About Emperor fish tank mates, this fish is compatible with most fish commonly kept in Reef Aquarium. like dwarf angels, genicanthus Angels , tangs, wrasses , clown-fish. it is considered an aggressive fish as you cant keep more than one of the same species in the same tank. it is not recommended to keep multiple large Angel species unless the tank is huge and 300 gallon or more, and the fish are introduced at the same time.

It should be fed a diet of Spirulina, marine algae, high-quality angelfish preparations, Mysis or frozen shrimp, and other meaty items. I feed it with my frozen fish recipe that all my fish love. you can check my previous article on How I make my food.
https://www.reef2reef.com/ams/feeding-fish-and-corals.422/


Yes I know the Tank is heavily stocked.

The Fish went - as most of my other fish - to QT tank for 4 weeks and treated with PraziPro. didn't do copper as angels sometimes can be sensitive to copper.
It was the second fish Added to the Tank after a tiny blue hippo tang.

The emperor was and still the king of the tank from day one even when it was still a juvenile. at first there was few fights with the purple tang. as time went by fights stopped completely and the emperor dominated the tank. fish avoid him with one exception, the cleaner wrasse. Any fish that goes near him, a little grunt will send the fish swimming fast in the other direction. he is not aggressive but he is dominant and all other fish respect that. an attitude of a King !!

Now that the Tank is his kingdom there is few places for him to hang out, his favorite cave and two spots for cleaning station.

Regarding if the angel is reef safe or not, it is safe with sps and many lps. When I first added it, It started to eat my acans and chalices until all were wiped out. The good thing that it didn’t touch my sps corals. So it was either acans or emperor. Obviously I went with the angel.

Also I had a few regular Zoanthids, Not the ultra ones , the emperor was nipping on them but they are still alive but growth and spread is limited.

Then I decided to add some colorful Zoanthids frags, these were instantly eaten by the Angelfish.

Thankfully until now it is not touching all the other corals ( SPS, Goniopora , Blastos, Euphyllia ) and even my clams.

Recently I added few chalice frags to test, the Angel didn't touch them at all, My theory that after 2 years without eating coral and getting highly nutritious and tasty food the angel stopped sampling corals. to confirm this I'll try to add an accan frag to see what will happen. if this go well i'll start adding more fleshy LPS.

This Fish is not Hard to keep it just need enough space, good nutritious diet and clean water. water quality is very important for the health and immunity of the fish. Water Quality is achieved by good filtration and large good skimmer . I also have a a good sized refugium with the powerful kessil h380 led. in addition to regular 10% weekly water change.

For More Info about my tank, you can check my build thread

And Reef of the Month for April 2018 spotlight 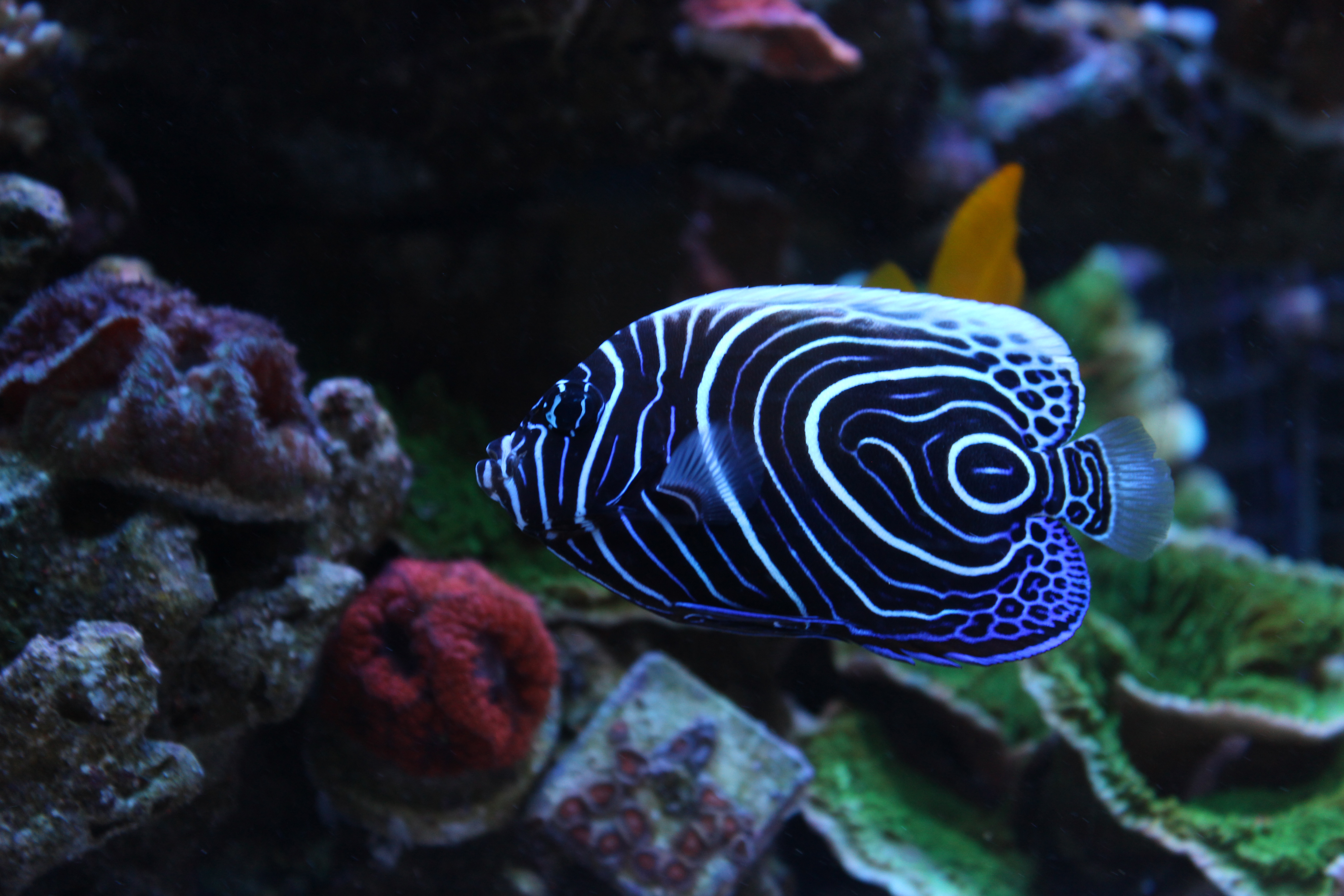 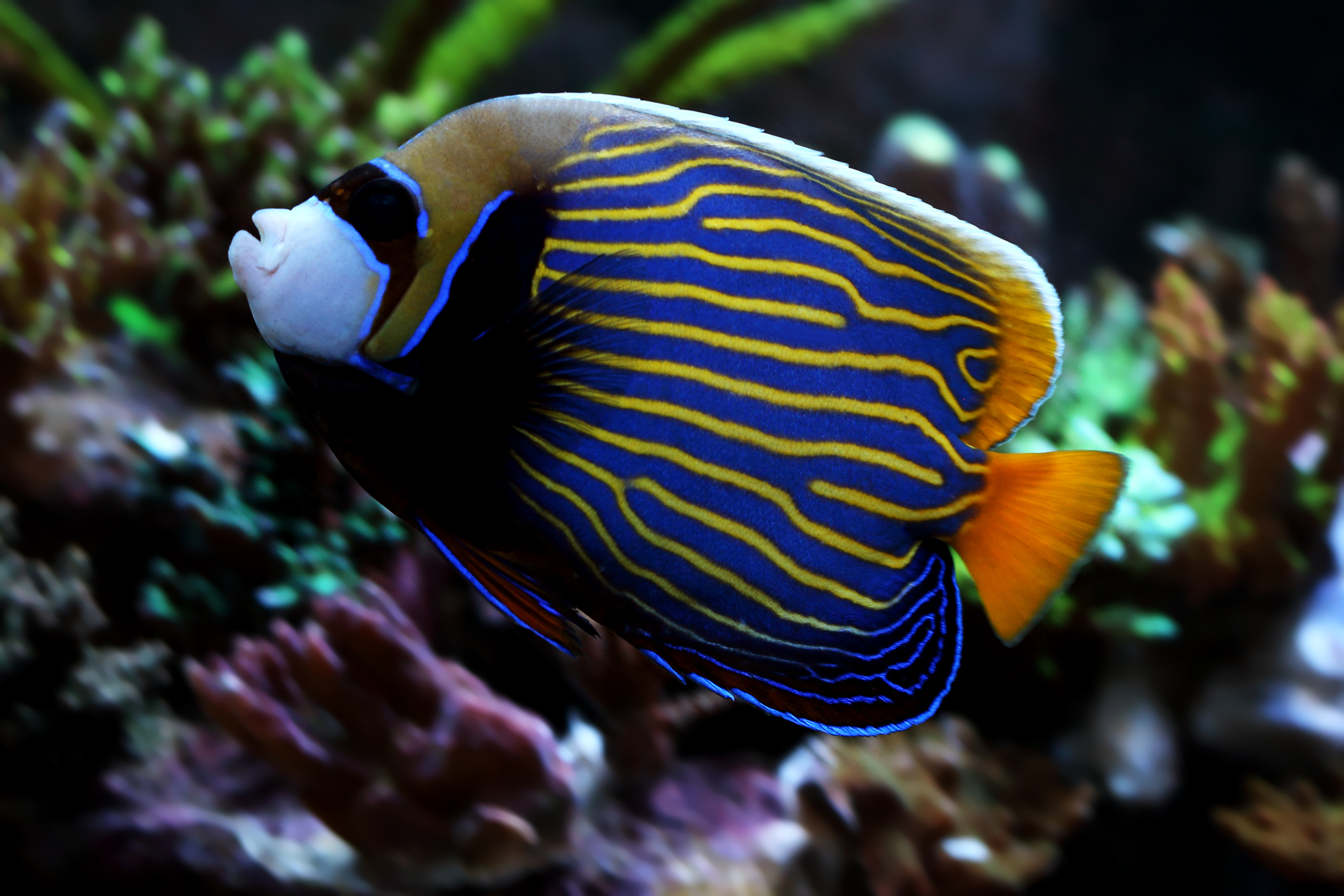 I bought this fish November 2016, it was Juvenile that came in fish shipment from Srilanka. I picked the smallest one and took it home.


Here is some growth timeline photos 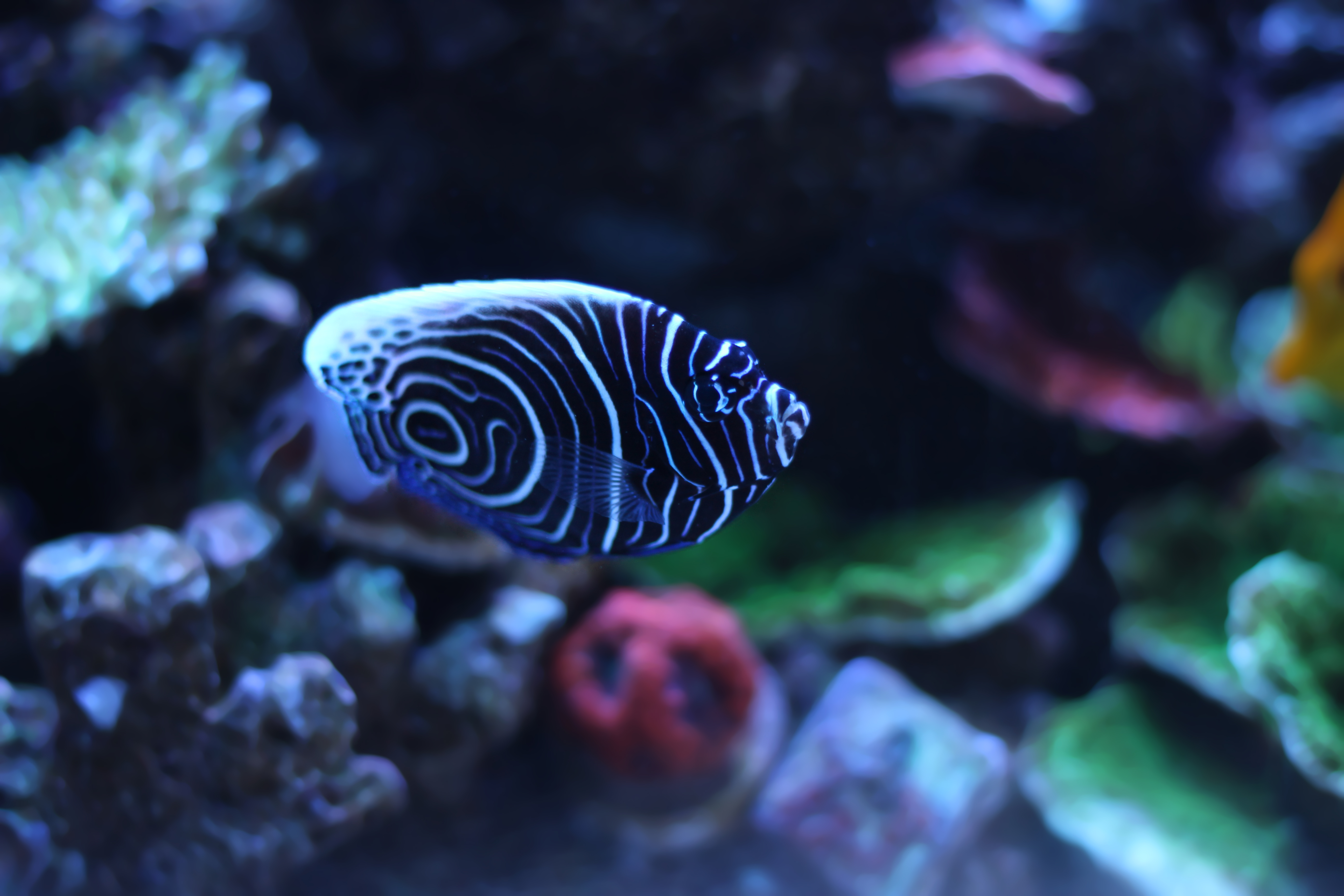 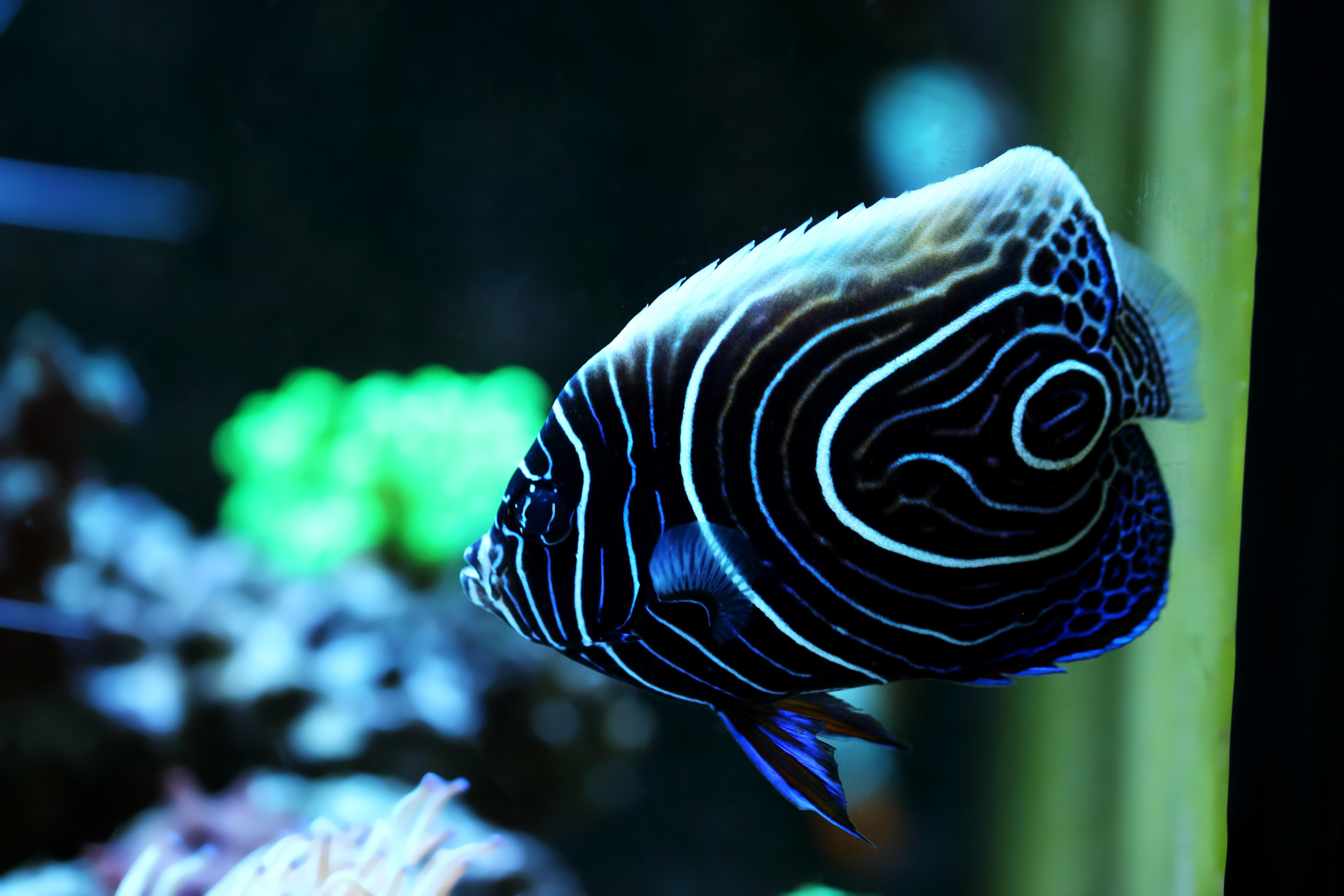 July 2017, a small hint of yellow is staring to show at the back of the dorsal fin and mid upper body. 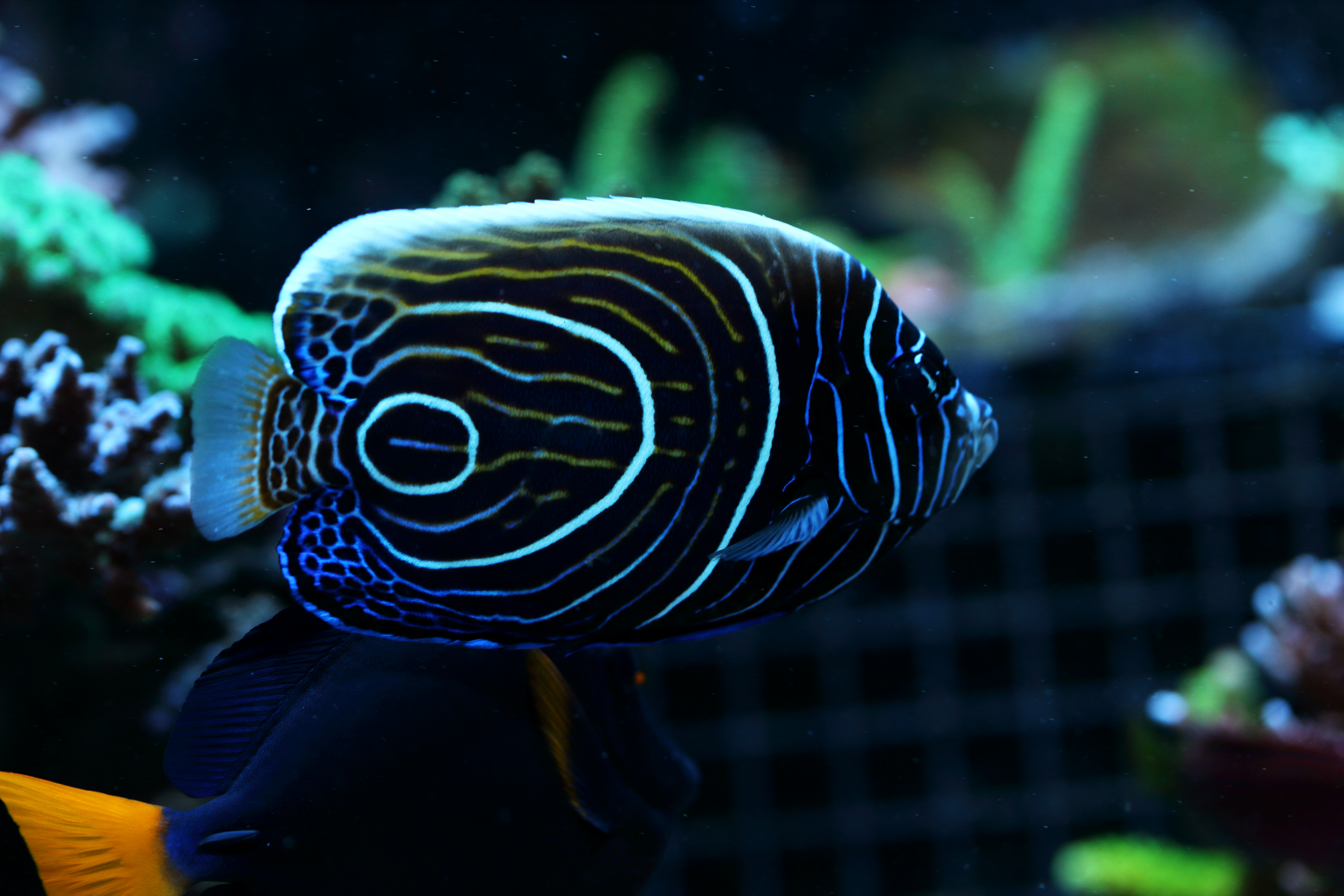 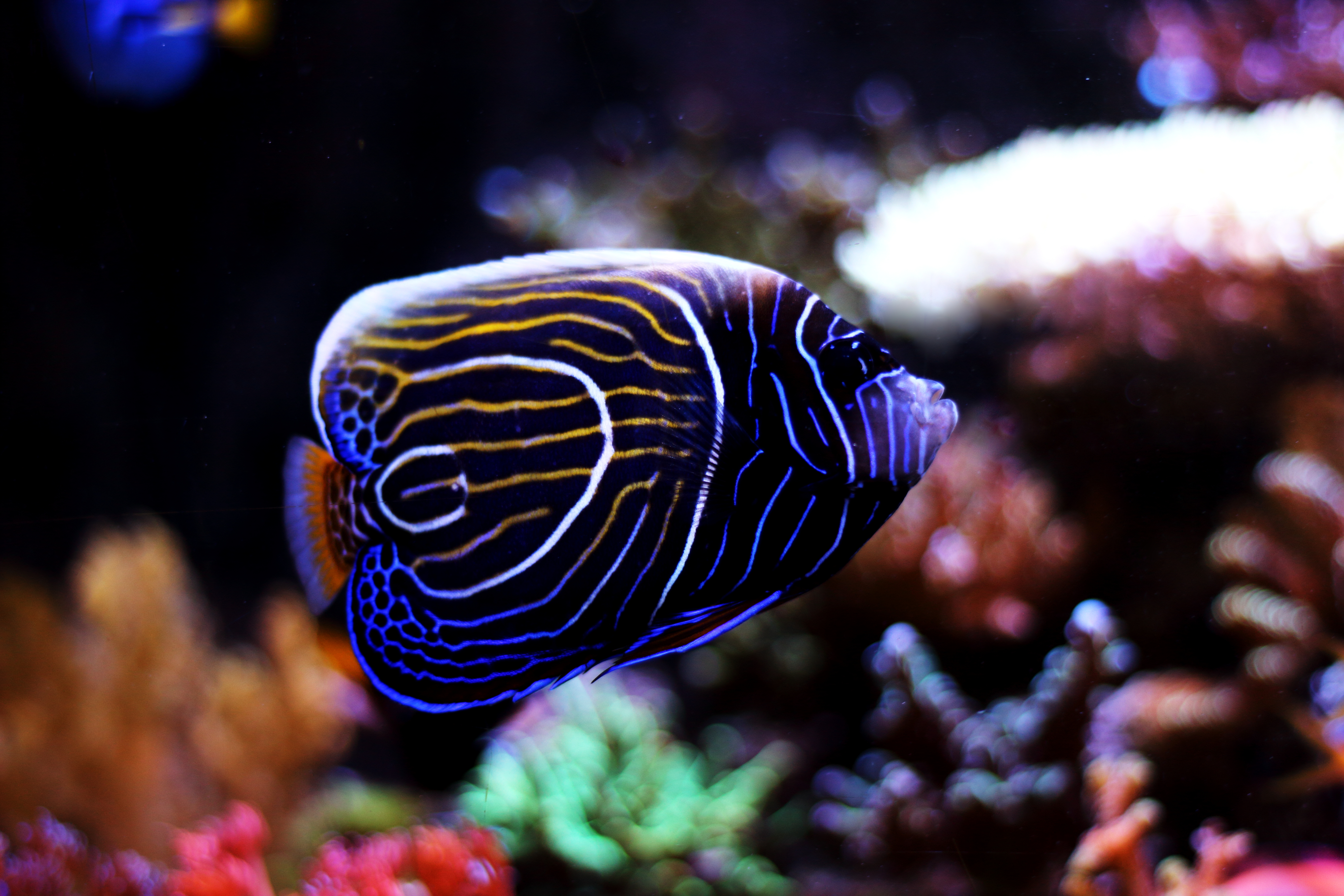 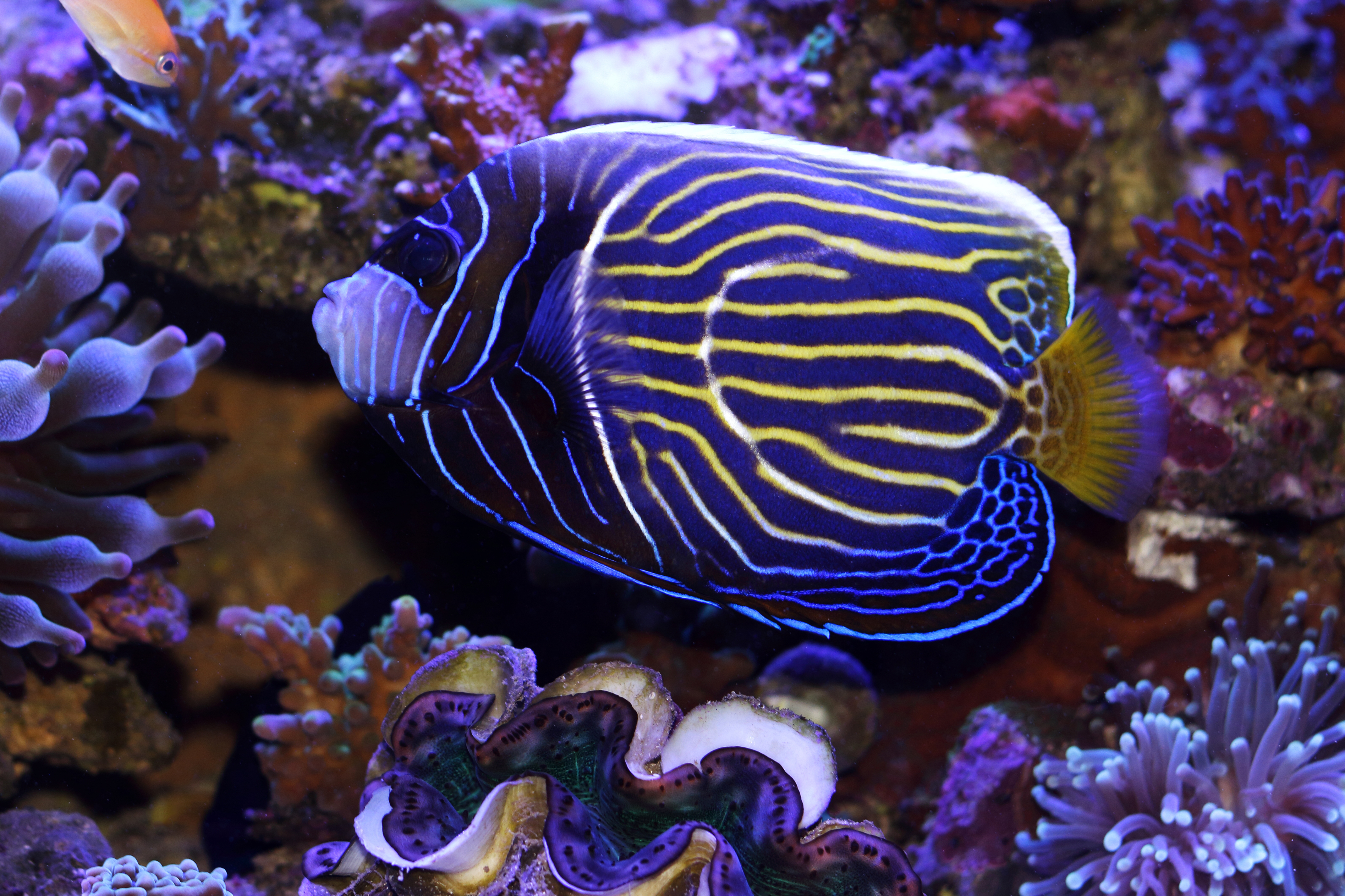 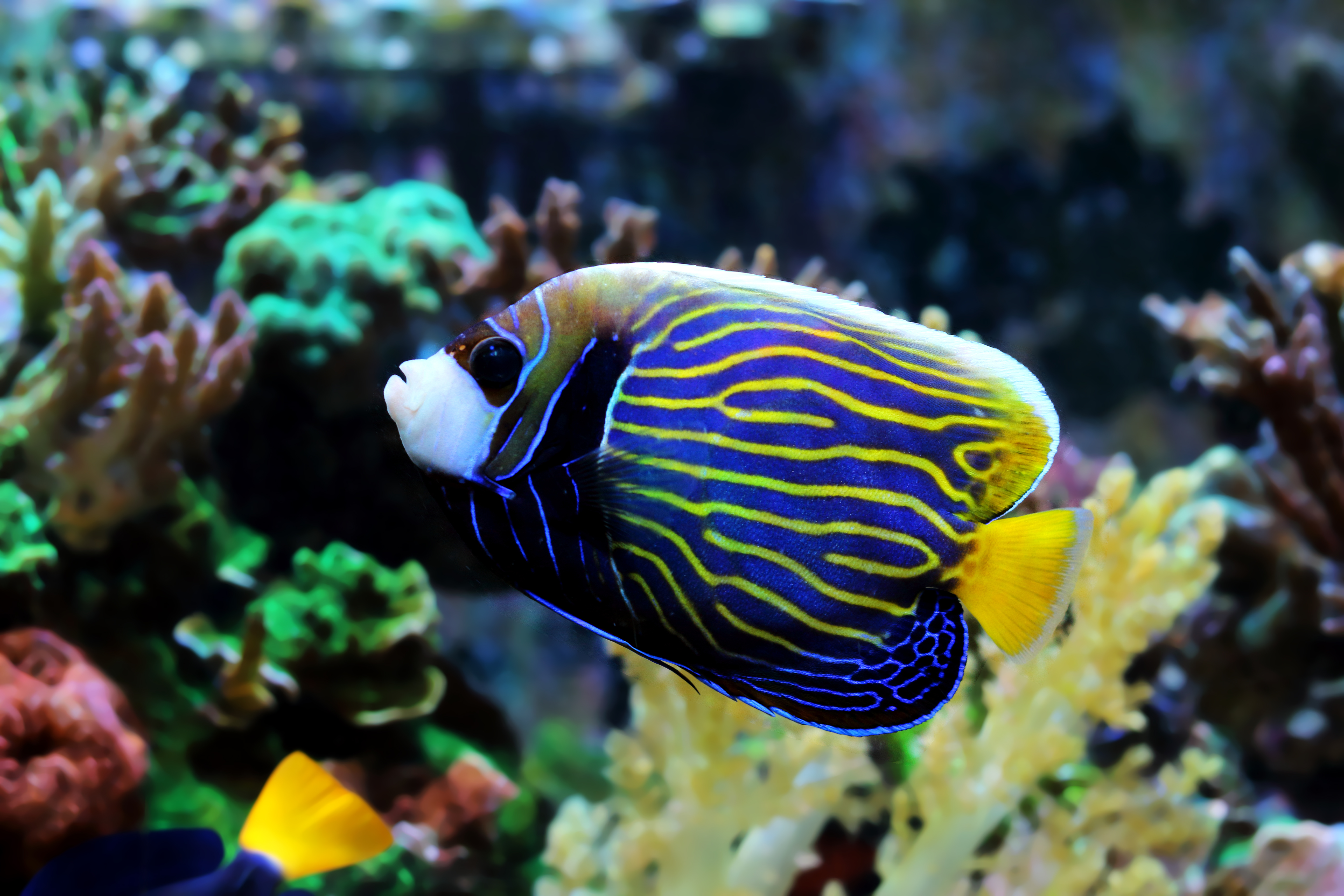 After just one month in February, the emperor is almost there. Most of the body was transformed to adult coloration. Still waiting for the face and chest. 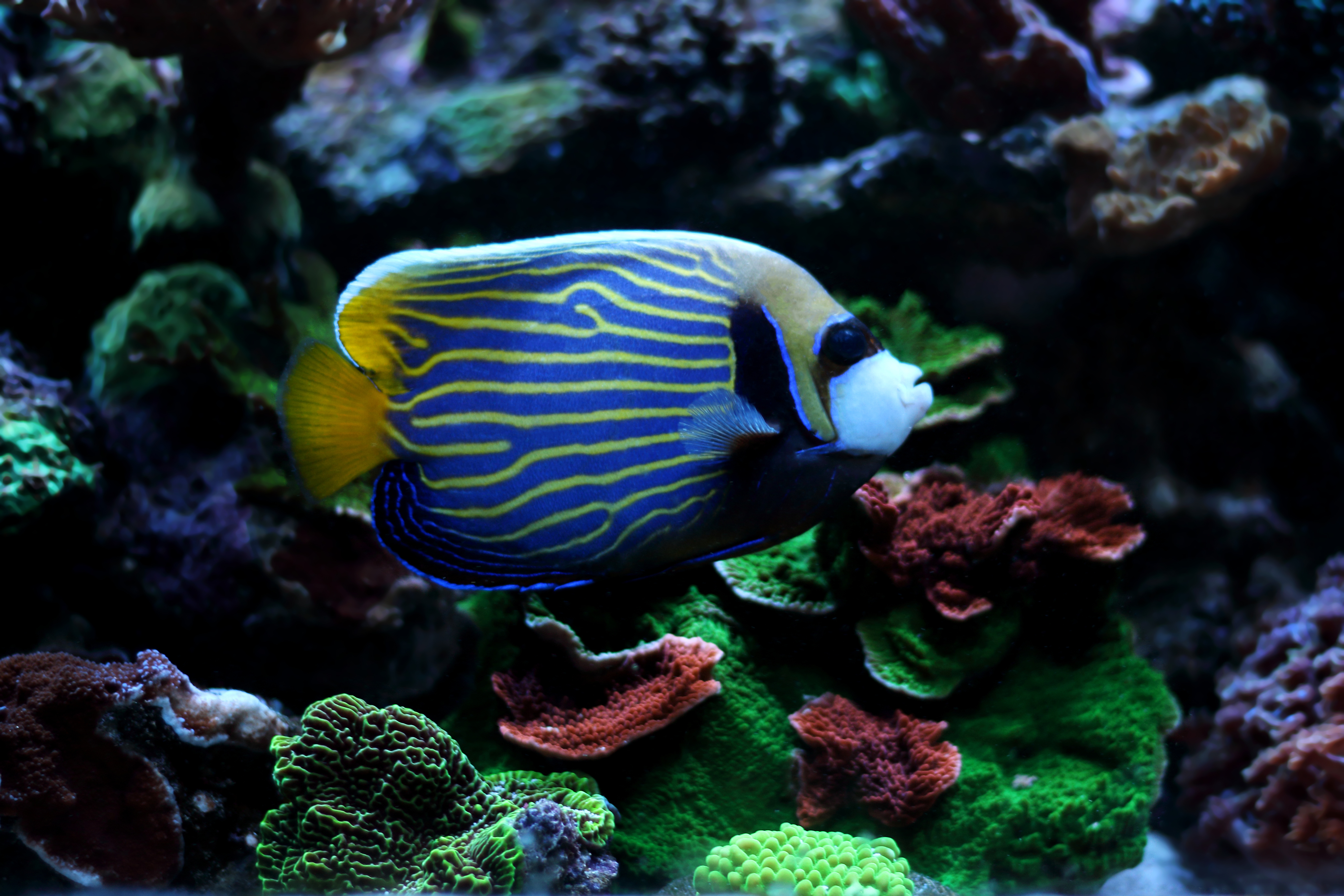 May 2018 the Emperor made its full transformation.

As you have seen in this Article it was an amazing experience to observe how this beautiful fish transformed in the last two years. 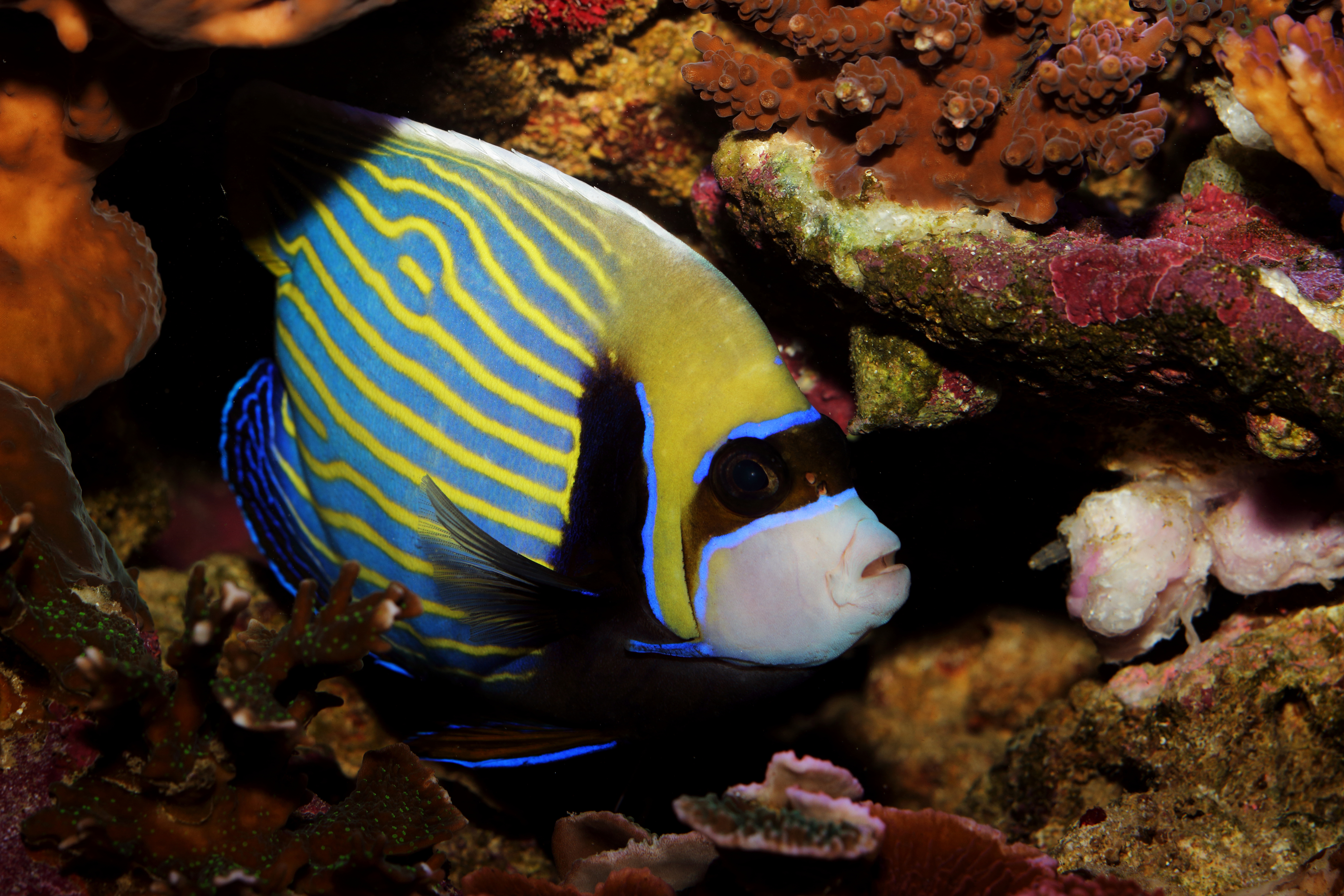 fabutahoun
Fadi is an Advanced reefer from Jordan and currently live in Riyadh - Saudi Arabia. Keeping a reef here in this part of world is not an easy task. most of the equipment are bought from the USA, and shipped them to Saudi Arabia. He is helping local fish stores to order live stock from well known Indonesia and the Philippines coral and fish exporters.

Fadi loves Angelfishs and Acropora, and always wanted to make a reef tank to hold them all. he created a 180 gallon tank that hold many angelfish and sps corals species in 2016. his tank was chosen by Reef2Reef to be Reef of the Month for April 2018.
Share:
Facebook Twitter Reddit Pinterest Tumblr WhatsApp Email Link

Great post! I purchased my imperator sub adult just 1 week ago and i learned a lot of knowledge here.
Read more…