Alright where to start... well to begin, my saltwater hobby brings me back all the way to 2014 when I went from a 20 gallon, to 50 gallo, then ended with a 90 gallon (as pictured below). I realized how much work it was to keep a 90 gallon after a year which brought my entire hobby to an utter end, which was around 2015ish?? . I love the idea and creation of reef aquariums. They fascinate me and everyday, I want to learn and know more about the hobby. I have always been on here over the years, but I have never been much of a "thread" type of guy. I am always in the background just watching and learning But today marks a new day I am going to do a build thread! So lets begin rant is over!

Okay, so lets get on with what the title says. I envisioned a nano tank with strictly SPS, yes I know the is not going to be especially since I am heading into my senior year of college, oops.

STAND
I decided I would put my wood working skills, to the test! Being that the tank with water and stuff would only weigh about 100lbs ish, I was not crazy worried about making this built to support a tank (like the one you drive in the military). I simplicity used 1x4, and used .25" plywood for the "outer shell".

CONTROL BOARD
Yes I know, some of you are already question what I just typed a control board for a 10 gallon tank? Yea I know, I went a little overboard with the equipment. I basically created a place to house all of my excess wiring, being that I built my stand my self, I had a lot of options on what I wanted to do.

LIGHTING - AI Prime HD black
I went with the AI Prime HD as I can see it can grow, SPS very or as I have read and seen.

SKIMMER - Reef Glass Protein Skimmer
I don't have a lot of room to work with... I saw that the reef glass protein skimmer was sleek and would fit in just nicely, I am using a tetra whisper for the air pump which is hidden away behind the control board.

ROCKS
Man, I sure had fun building my rock work! I made it super simple and only three points of contact at the bottom. I went with the dry rock and bottled bacteria approach.

FLOW - Ice Cap Gyre 1k
I went with the ICE CAP GYRE 1k, now I know I already see a few of you guys thinking woah, way over kill, but to be honest I think it will work perfectly being that the tank is Bare Bottom and I am strictly doing "colored sticks".

AQUARIUM CONTROLLER - Neptune Apex Lite
Yes I know, I put a Neptune Apex Controller on a 10 gallon tank! My reasoning behind it was simple, I watch craigslist a lot... like a ton. I saw a post of a tank break down and saw a super sweet deal on this apex. I did however go ahead and buy a new temp and PH probe, just to be on the safe side.

CHEATO REACTOR - Vertex 2.0 Reactor
I know, I know, I know... why in the HECK would I put a vertex 2.0 on a 10 gallon tank!?! Two reasons, first is I bought the reactor for a crazy steal, when I say crazy I mean crazy and it looks and performs new. Second is I need to add as much volume the tank as possible to help alleviate any possible wings that may occur.

MISCEALLANIOUS - ATO, Reverse, testing, dosing
In the past, I have always used my "well" water thinking it was safe, man was I wrong, my TDS read 190! Idk how I keep any SPS and has very little algae problems, lol. I went with the BRS 4 stage with a TDS meter, I ended up upgrading to the 150 water savor and bought the pressure pump thingy, can't remember the name off the top of my head. I also went with the Tunze ATO nano, which has a 5 gallon home depot bucket in the bottom of the stand so I rarely have to fill the tank. When I bought the Neptune Apex the dude selling it gave me a the Jebao doser with it because he was getting ready to move and was not interested in holding onto and selling anything else, so win in my opinion.

Well I have more pictures to post but I hope I did will with my first build thread. There is still a ton of other stuff I did not include but ask away if you would like to know anything. I will try to keep you guys updated as much as possible!! 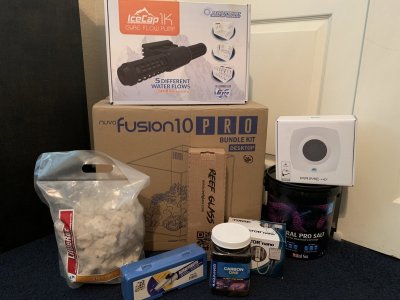 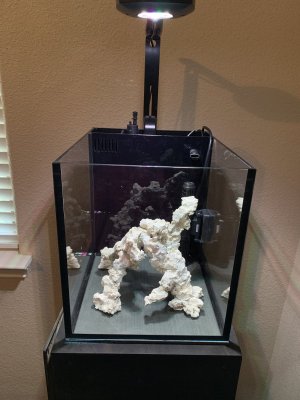 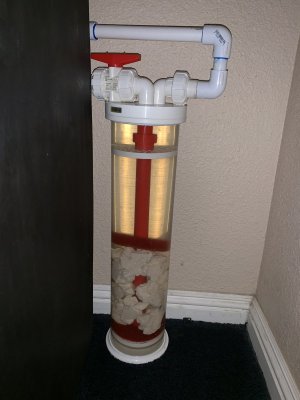 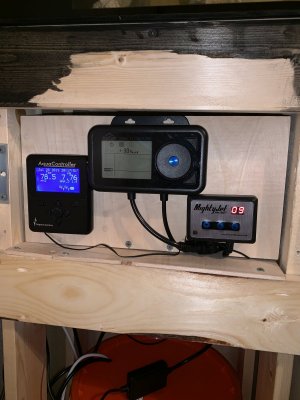 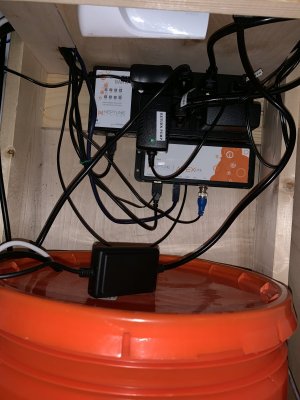 Here is my old 90 gallon reef prior to the break down. 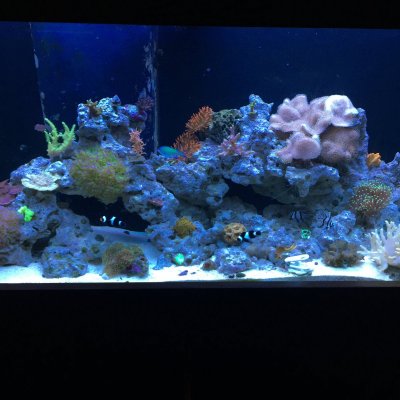 Nice setup! I really like that rock structure for the 10 gallon. Very interesting shape!
OP

I am currently on day 34 as we speak, I have now installed a UV sterilizer after having a bacterial bloom for over three and half weeks. Yes, I know the Uv may be hurting my cycle but in my opinion after only seeing ammonia above 2ppm I have finally started to see some heavy nitrites which are eating away at that ammonia! for bacteria I started with Micro banter 7 but after 2 weeks seeing no change in my tank and heavy cloudy, I added Dr. Tims One and only, to help establish a stronger bacteria base. 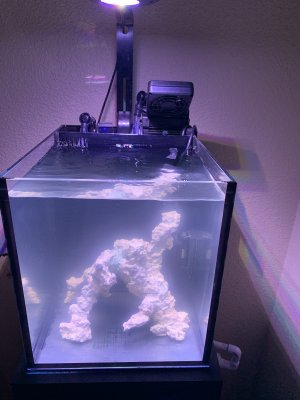 NY_Caveman said:
Nice setup! I really like that rock structure for the 10 gallon. Very interesting shape!
Click to expand...

Thanks! I had a lot of fun making it!

Also I love watching youtube videos so I have been documenting my entire build there as well. I will leave a link for you guys to watch! 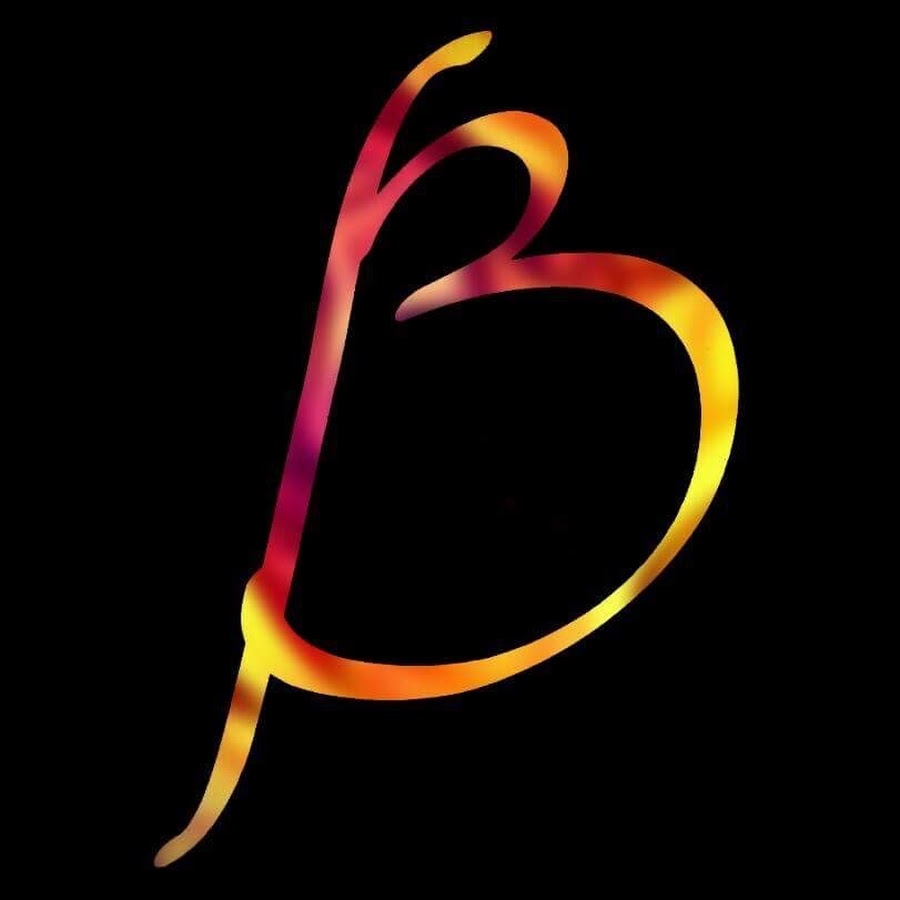 Fast. Intense. Extraordinary. These three words describe my channel best. Hello, I'm Colton, better known as Blitheran. I strive to make my videos grow to yo...

Great pictures and I like the rockwork, very nice!
OP

I love the scape !!! Very very nice. So you have a mini jet and a gyre in there ? How is flow on the gyre for that tank ?
OP

Steven Garland said:
I love the scape !!! Very very nice. So you have a mini jet and a gyre in there ? How is flow on the gyre for that tank ?
Click to expand...

Thank you steven! So for flow, I havent really been able to tell as I have been able to dial it in because of the bacterial bloom... still super bummed about having to wait this long haha... so I just set it at 30% and left it. I have noticed at 30% the middle portion of the tank under the scape has lowerish flow which is how I designed it so fish and detritus can get caught so, so far I am loving it!

DAY 34
Alright well, I think I am going to post daily updates of what/where my parameters at, in the cycling. So day 34 the tank is still cloudy and ammonia is about 1ppm, nitrite is about 1-2ppm it is getting stronger! And nitrite 1ppm ish? 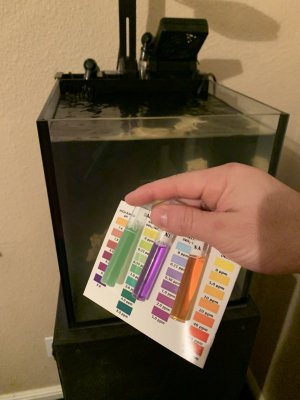 You guys are really enjoying my scape, I did record the entire process of me building the scape if you want to watch how I made it!

Here is a link: 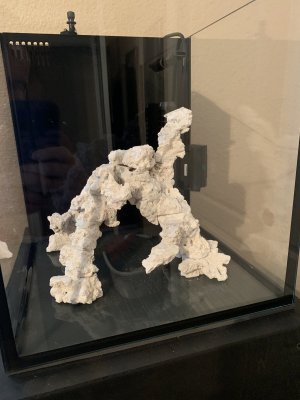 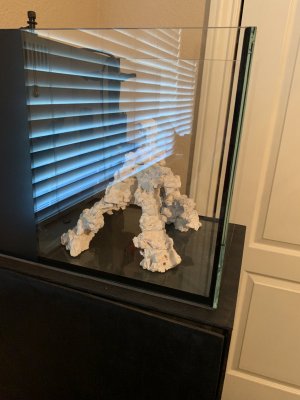 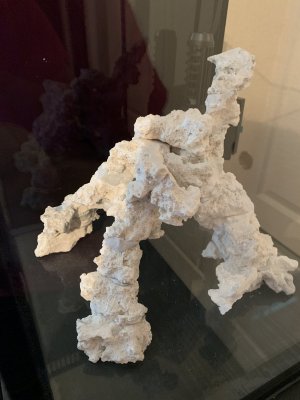 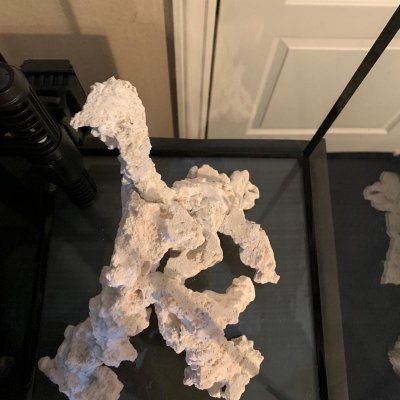 I'm surprised at 30% that gyre isn't pumping mad water out of the tank. Definitely might be a contender for nano tanks like ours.
OP

Steven Garland said:
I'm surprised at 30% that gyre isn't pumping mad water out of the tank. Definitely might be a contender for nano tanks like ours.
Click to expand...

I actually bumped it up to 100% just for S*^#s and giggles and water stayed inside the tank! I believe my scape may play a lot into why the water doesnt splurge out

Any thoughts on fish stocking? Will be following

Jdubyo said:
Any thoughts on fish stocking? Will be following
Click to expand...

Thanks for joining my journey! So this is a tough question as I have a limited amount of space so, I can at max put three fish... with that being said... I want a designer fish, I have been eyeing some very nice looking ORA Black Ice Snowflake Clownfish. I really want to get them, but sadly this tank is taking it’s sweet time cycling! Also I have a huge sweet spot for manderin gobys but I feel as though my high flow tank may be way to much so we will see!

Alright so I have been fumbling with the idea of just turning on the lights, and letting the “inevitable” ugly phase play it’s way out. Im running a version of the AB+ spectrum, but with the whites a little higher, 70% 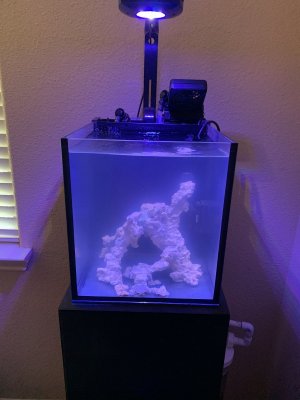 I think having it in the back corner like you do helps a lot too,so that is good. That is the 1k right ?
OP

Steven Garland said:
I think having it in the back corner like you do helps a lot too,so that is good. That is the 1k right ?
Click to expand... 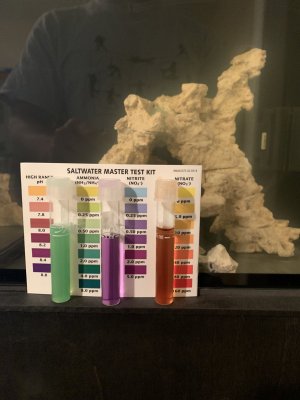